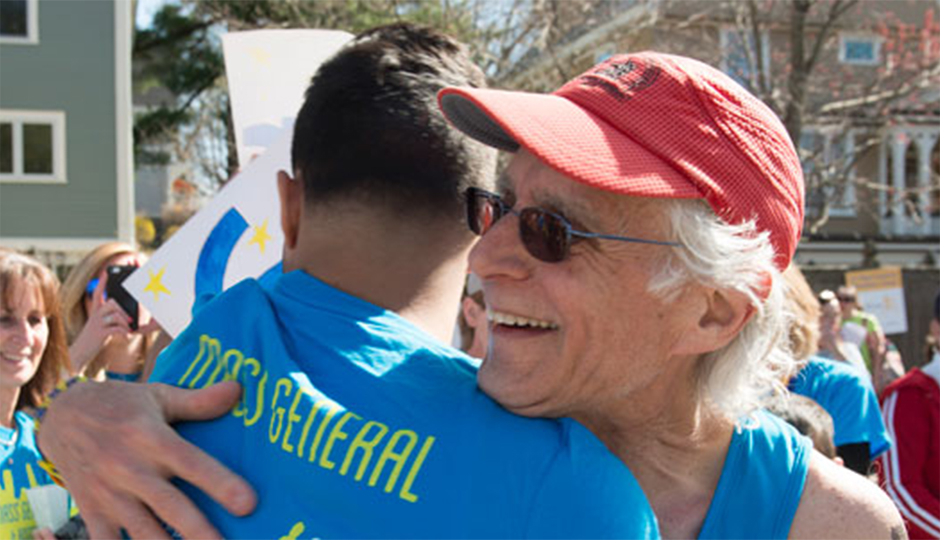 In November of 1990, Howard Weinstein ran his first marathon. It was a personal challenge for him, who was at the time the head of Pediatric Oncology Ward at Children’s Hospital in Boston. “It was thrilling and exhausting,” said Dr. Weinstein, who practically collapsed into his family’s arms at the finish line in Central Park. The thrill did not leave Weinstein. He decided that he would run again-this time in his hometown of Boston, and this time for a good cause.

That cause was simple for Dr. Weinstein. His life is devoted to treating children with cancer. At the time of his next marathon in 1991, he was the Chief of the Pediatric Bone Marrow Transplant ward at Boston Children’s Hospital, and decided to run for the Dana Farber Marathon Challenge, which at the time was a relatively new concept. If he thought New York was thrilling, Boston was thrilling on steroids!

Seven Boston Marathons later, in 1996, Dr. Weinstein was recruited to lead and build the Pediatric Hematology and Oncology Program at the Massachusetts General Hospital for Children (MGHfc). Already in love with marathon running, and the camaraderie of a team event; and knowing that fundraising would be critically important to the mission of the program, Dr. Weinstein decided to create their own marathon team.

Fighting Kid’s Cancer…One Step at a Time is the name of the MGH Pediatric Oncology Team that started in 1998. The team has grown steadily each year and on April 18th, over 100 runners will show up on the starting line of the Boston Marathon. They run to raise money, and they run to honor and support patients and their families who are being treated for pediatric cancer.

It seems impossible that a busy head of Pediatric Oncology at the Massachusetts General Hospital would have time to train for, and run a marathon-let alone 25 of them. Dr. Weinstein often fits his training runs in at night after long days at the hospital. His steadfast motivation to make children healthy translates into his unwavering enthusiasm, not only for the event, but for each runner and patient partner on the team.

Patients and families wait at mile 20, not far from Dr. Weinstein’s home, where they will meet him and the 106 runners with cheers, posters, hugs, and maybe even a glass of lemonade and a cookie!

In partnership with John Hancock Financial, the Mass General marathon Team has raised $11 million since it was established in 1998, with Dr. Weinstein raising $1.2 million over the years. He is a gentle giant, making a big difference in children’s lives, in the hospital and on the streets. A champion for sure!

This year, 106 runners will take to the starting line of the 120th Boston Marathon. Their goal is to raise one million dollars, and they are well on their way! Funds raised are directed to cancer care and research initiatives that enhance the quality of life for the hospital’s youngest cancer patients.

This will be Dr. Weinstein’s 25th Boston Marathon.