In Search of the Holy Grail: Early Detection of Ovarian Cancer 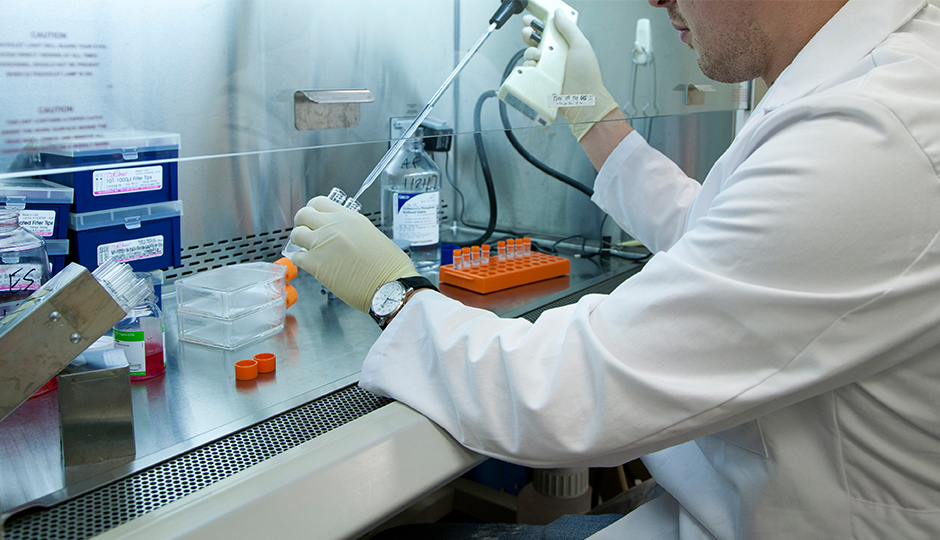 You just don’t feel well. You’re bloated. You feel full shortly after beginning your meal. You’re constipated (or have diarrhea) — which is unusual for you. You shrug it off to eating more than you should have over the weekend, or eating something that didn’t agree with you. That’s the problem with non-specific symptoms. Sometimes they lead to deadly results: ovarian cancer. Called the “silent killer,” ovarian cancer is often detected too late — when it has spread throughout the abdomen.

Michael J. Birrer, MD, PhD, Director of Medical Gynecologic Oncology at Massachusetts General Hospital Cancer Center, and his team of 35, in collaboration with Dr. Steve Skates of the Biostatistics Unit, are trying to develop a test that will detect ovarian cancer in the early stages. Mass General is also collaborating with MIT’s Broad Institute on this project. “We are only one of two NIH [National Institute of Health]-funded program focused on the early detection of ovarian cancer,” Dr. Birrer says.

The early detection research involves using highly sophisticated protein analysis of the blood of women with ovarian cancer. The proteins can be detected at very low levels and are secreted or shed from the cancer. Identifying a panel of protein found in the blood of ovarian cancer patients may provide the ground work for the development of a test which can identify ovarian cancer at an early stage.

In addition to analyzing blood, Dr. Birrer and his team are testing vaginal specimens from the same women. He says, “By high throughput sequencing, we are looking for genetic mutations from DNA that might have come from the cancer.” He believes these novel approaches are likely to lead to an early detection test that can then be validated in a clinical trial. That, he says, is five years away.

Unfortunately, most ovarian cancer is diagnosed at advanced stage (spread through the abdomen). The initial treatment is to remove as much tumor as possible by an extensive surgery. The more tumor that is removed, the better the patient does. “We are developing an ultra-sensitive imaging device in collaboration with MIT scientists, which will allow surgeons to remove sub-millimeter disease,” Dr. Birrer says. When the imaging nanoparticles are injected, it sticks to cells, showing tumors that cannot be seen with the naked eye. Doctors can then remove them. Testing is currently being done on animals. “We’re working hard on doing a human trial,” he says. “More complete resection at initial diagnosis will improve survival from this disease.”

“There’s a lot of cool, out-of-the-box science here,” Dr. Birrer says. Doctors are always looking for answers and new therapies for these cancers. “There is a wide spectrum of mutations and the genes they affect among ovarian, endometrial and cervical cancers,” he says. “We know that about 20% of ovarian cancer is from abnormalities within the ‘germ line’ of women.” A strong family history is present in only 8% of all cases of ovarian cancer. For years, the focus was on the ovaries themselves as being the problem. Now, however, many doctors think the fallopian tubes that carry the eggs from the ovaries play more of a role in ovarian cancer. Dr. Birrer says there is “vigorous discussion” about removing the fallopian tubes after childbearing years as a possible preventive measure.

Although nothing can prevent ovarian cancer, except for surgically removing all related organs (which is not always recommended), Dr. Birrer says there are things that can reduce a woman’s risk. “Oral contraceptives reduce the risk by 50%­­­­­,” he says. Doctors have noticed positive effects after as little as one to three years’ use. “Even if a woman stops taking oral contraceptives,” Dr. Birrer says, “their protective effect continues because they prevent ovulation, which wounds the ovaries.” He recommends their use in women who have a family risk for ovarian cancer (BRCA mutated) recognizing the potential increased risk for breast cancer in these patients treated with oral contraceptives.

There is no cure for most cases of  ovarian cancer. However, Dr. Birrer says that having regular gynecological check ups, eating a healthy diet, and exercising regularly may help cancer patients live longer.

“The ‘holy grail’ is to find an early detection test,” Dr. Birrer says. Hopefully, his research will result in discovery of the gold chalice.