How to Master Indoor-Outdoor Living, According to a Highly Sought-After Boston Architect

Architecture for American homes, however, was historically focused on keeping the inside and outside separate. In four-season regions such as New England, it’s easy to see why avoiding harsh climates was part of the goal of the design. Now, everything has changed.

Advancements in the field like insulated glass and window frames have given way to a range in architecture—so much so that there’s a design trend dedicated to marrying nature outside to life inside the home: indoor-outdoor living. Here’s how Nicholaeff has perfected it. 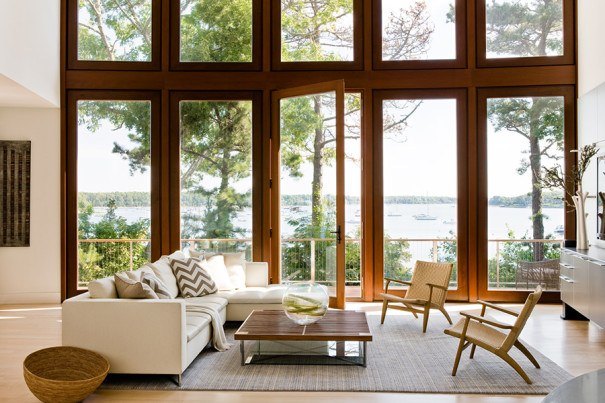 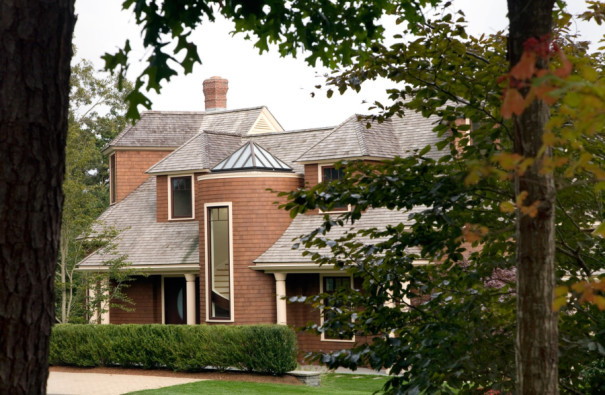 The first thing you may notice when you enter a Nicholaeff home is the natural light filling the space. For Nicholaeff, that’s a huge part of the draw to indoor-outdoor living. “Catching natural light brings warmth and happiness into a home,” she says.

But it’s not as simple as it may seem. “We work on many north-facing properties, and they have their challenges,” she says. “Light from the north isn’t as direct and bright as it is from other orientations.” But this, for Nicholaeff, is where the project really begins to take shape.

“Capturing light from the south and ocean or garden views to the north strongly inform the design,” she says. For Nicholaeff, using large planes of glass through expansive windows and sliding doors is paramount.

Many of her homes incorporate roof lights and even windows that scale multiple stories, like the one pictured above revealing a curved staircase. “The roof light above naturally lights the stair,” she says.

Nicholaeff says that all her projects engage with the exterior. “It’s about your journey through the house, connected to the landscape,” she says.

Working from the Outside-In

Although much of indoor-outdoor architecture involves designing the interior features of the home, it also requires working with outdoor features to connect them to the inside. “It really has to be brought together,” Nicholaeff says. “We interface with landscape architects to make sure that whatever we’re designing on the exterior relates to what’s going on in the interior. It’s a dialogue.”

This means developing the landscape as an extension of the home. In a current project, Nicholaeff explains that the property, situated at the entry to a harbor, encompasses both harbor and ocean views.  Not only does the property respond to these views, but it also accentuates them by way of both architecture and landscape design. All the first-floor spaces open and extend to exterior living terraces and the pool, and the second floor opens out to decks for lounging.

In another project, detailed in the video above, the Nicholaeff team is building both a pool house and a tree house–the ultimate indoor-outdoor project. Before the team stepped in, the pool was accompanied only by a small cabana. “There was no relation between the existing house, the landscape, and the pool,” Nicholaeff says.

Nicholaeff’s plan was to let the new construction be part of the land. “Now everything speaks to each other,” she says. “The pool house completely opens up to the exterior, and the treehouse with its cantilevered deck hovers above the land and between the trees.”

In this project, and in many others, perfecting the indoor-outdoor style comes down to considering every detail, like what type of railings to use on a deck. For the pool house and treehouse project, Nicholaeff’s clients opted for cable railings that would blend with the existing landscape and maintain the view of the pool and surroundings. Many clients also opt for glass railings to get the most out of their favorite views.

Any View Will Do

If you’re wondering if you can get the indoor-outdoor feel in your suburban neighborhood, which may feel closed off compared to beach or lakefront properties, worry not: Nicholaeff believes that any property can become a dream indoor-outdoor oasis. “Even if it’s flat with no foliage or trees, you can create those special views and spaces,” she says

For example, Nicholaeff worked on a suburban project which comprised a main house, garage building, and pool house.  “We created a variety of outdoor spaces by setting up the courtyards as an extension of the interior spaces and formed by the architecture,” she says. “The entire site becomes a composition formed by land and building.”

Ultimately, Nicholaeff hopes people in New England continue to open up to the idea of indoor-outdoor living. She even says that the cold Boston weather doesn’t threaten her projects. In fact, she says glass homes can feel very warm on the inside and create a sense of appreciation for the season.

“Being able to view the weather at its worst from the warm sanctuary of a space behind glass walls makes even the harshest winter storm a beautiful spectacle,” she says.  “Seeing the ocean when it’s rough and cold—it’s just stunning.”

Visit nicholaeff.com to break ground on your bliss and witness Nicholaeff’s masterful process for yourself.