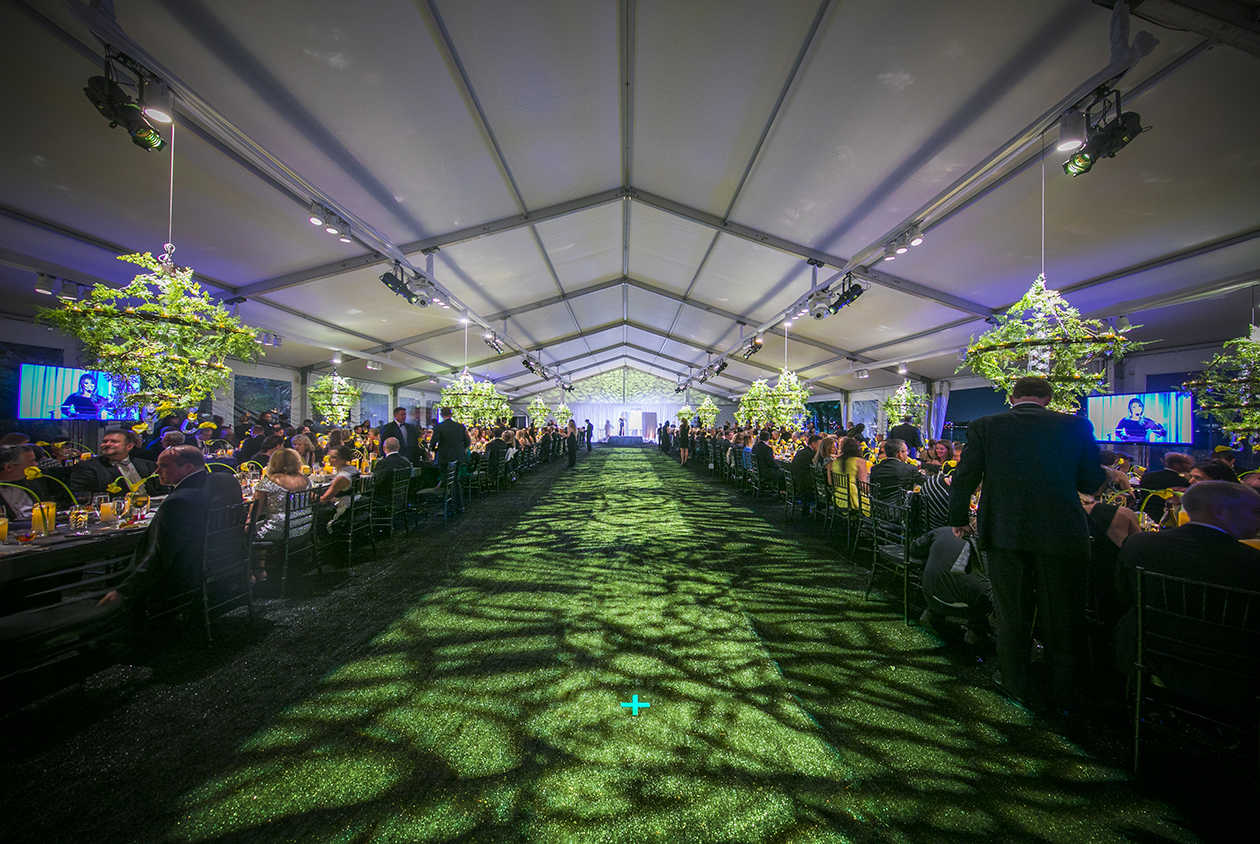 Frost Productions has developed an excellent reputation in the city for pulling off jaw-dropping events. From galas at the Isabella Stewart Gardner Museum to the actual Greatest Party on Earth (GPOE) for the Artists for Humanity, the lighting design company has built quite the résumé.

But beyond the lights and Instagram-worthy designs, the team puts in a lot of man hours planning and setting up Boston’s biggest events, like the Esplanade Association’s Moondance Gala in September.

“It all starts with a meeting,” says Karen Shoop, director of sales and operating partner of Frost’s Boston division. For the Moondance Gala, Shoop met with Marc Hall Design and planner Tracy Davis. “We met with everyone on the board for the gala and talked through what they wanted for the overall feel. I brought these ideas back, conversed with my design team, came up with a design concept, put it all down on paper, received client approval, and sent it to the production team.”

That’s where Warren Cullmer, associate designer and project manager, comes in. Cullmer draws on his training in Theatrical Lighting Design from Boston University, where he gained a strong foundation by experiencing many of the same challenges that surround the world of event production.

“I’m presented with the overall design concept at which point I translate the various design elements into specific choices with light,” says Cullmer. “I designate particular lighting fixtures, where and how they are placed, in order to achieve the desired design dynamic.”

Set on the Charles River Esplanade at sunset, the black-tie Moondance Gala was influenced by the lush outdoor setting. Cullmer took a cue from florist and event designer Marc Hall for what the style and feel of the lighting should be.

“It was like a modern, enchanted garden,” says Cullmer. “That meant intensifying the floral chandeliers suspended over the tables with light.”

Shoop says the initial design depends on the client’s desired look and feel. With a florist and designer leading this event, the concept was already developed.

“We take the client’s lead on what kind of atmosphere they’re trying to create,” says Shoop. “There are so many ways to achieve that by bringing in different textures, tones, and colors using light. Sometimes, it’s as simple as, ‘We don’t like the ceiling and we want to cover it.’” 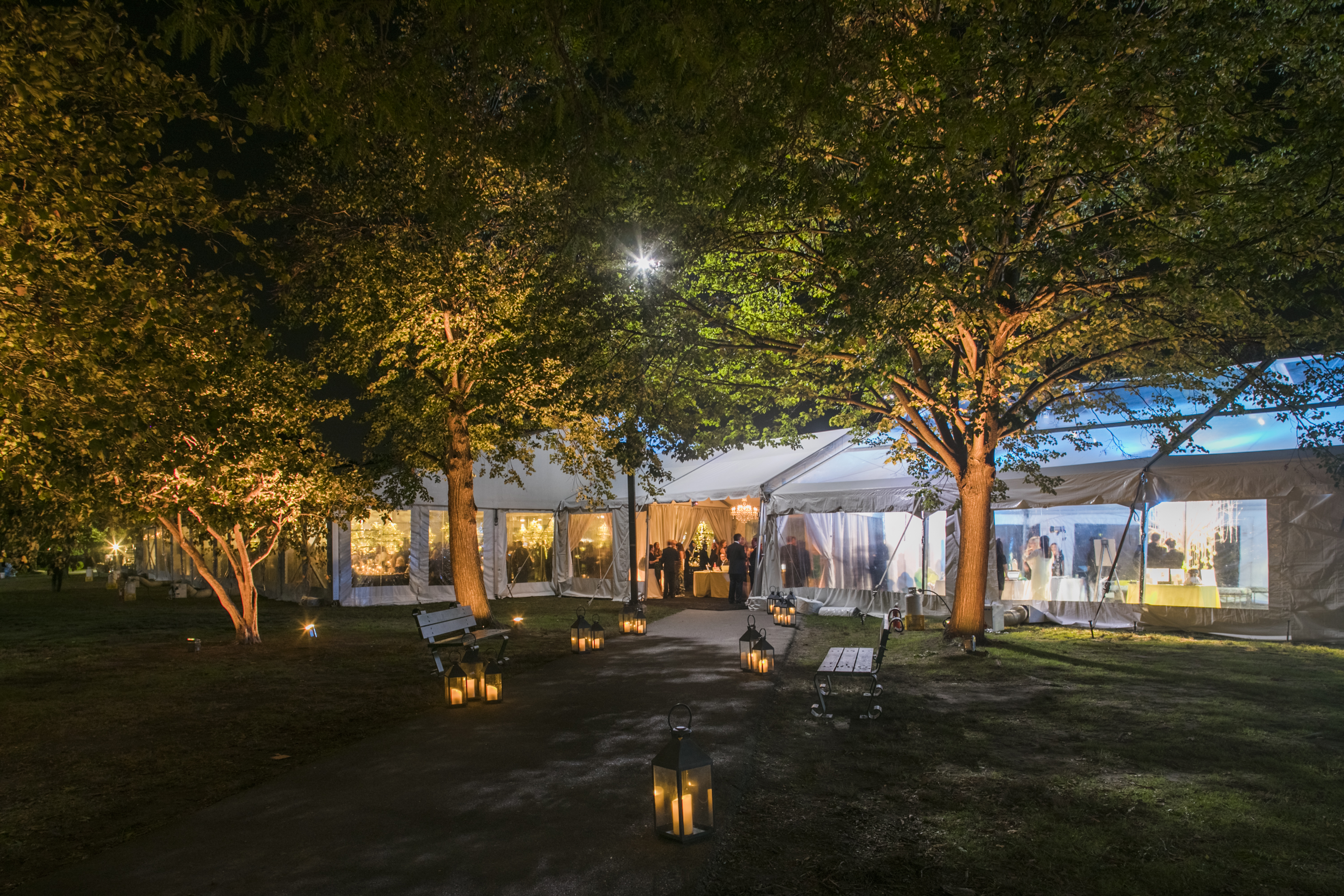 Cullmer says even that can be enough direction for his team.

“A lot of what we do with lighting is drawing the eye, either to something or away from something,” says Cullmer. “Lighting helps draw focus upon certain areas or themes, so everything else fades into the background. By doing this, we are able to create a visual sense of depth and interest in even the most monotonous space.”

The design process relies on theme and invoking a certain feeling for guests, even if the guests themselves aren’t aware of any distinct patterns or textures. Shoop says having knowledge of the available technology and years of expertise helps determine what lighting applications are most appropriate for each event.

“An 80s-themed party would incorporate geometric shapes and bold colors,” says Shoop. “If you’re trying to create something moody and romantic, you want those lines blurred. If someone wants chandeliers, you have to zero in on their aesthetic to determine whether that’s an elegant crystal chandelier or something more rustic with wrought iron and natural materials.”

Any one event could have dozens of contributing vendors. For the gala, Frost managed generators and power distribution, as well as audio and video, in addition to their 23-person in-house team. They also connected with each of the gala’s vendors during the design process to ensure no detail was missed.

“With florists, we need to know how big their arrangements are and how many they have,” says Shoop. “With caterers, we need to know their setup in case we need to light a raw bar or even a back-of-house work area. These are little things you wouldn’t think a lighting company needs to know about, but the more informed we are, the better.”

“The whole event is one big puzzle,” Cullmer adds. “Everybody brings a piece and they all need to fit together perfectly otherwise it’s not going to be a seamless outcome.” 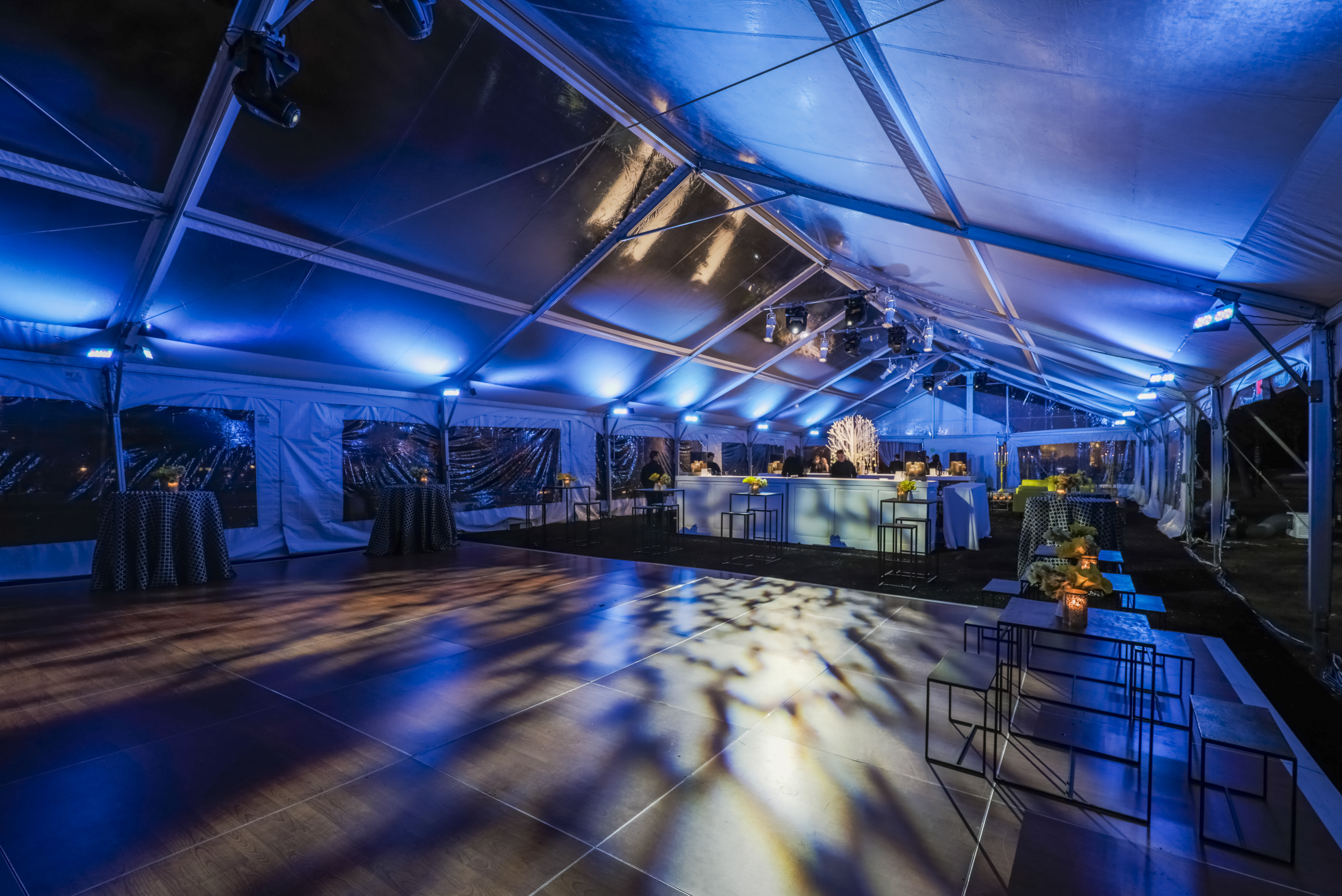 The Moondance Gala was held in two main tents – one served as the dinner reception tent, while the other was designated for both cocktails and the after-party. Cullmer uses the layout of an event to coordinate the positioning of the lighting elements.

“I create a technical drafting that includes all of the physical components of an event such as the arrangement of dining tables, bars, and stage,” says Cullmer. “Then, I lay out all of our lighting and decor elements in relation to these components. In addition, I’m able to look at how everything fits into the venue itself.”

Cullmer used a specialized lighting control console to program more than 200 individual lights in tune with the sunset; an intelligent lighting system highlighted the tent for cocktail hour and seamlessly transitioned in time for the after-party. A registration area in the middle was also tented and incorporated into the design. The team opted for a more labor-intensive installation process to keep the overall lighting rig streamlined, as to not visually distract from the allure of the gala’s environment.

In addition to lights, portions of the tent needed to be covered in drape – lots and lots of drape.

“It took 516 feet of drape,” Shoop says. “You need to double or triple the amount of space you’re covering so that the ruching is even and none of the metal in the tent is seen. It all needs to be cleaned and hand-folded before and after each event. It’s very labor-intensive.”

But one of the bigger challenges of setting up an event of this size in this unique location was transporting the materials.

“To get everything there, we had to drive our trucks down Storrow Drive, along many of the cycling paths and over a little footbridge on to one of the islands,” Cullmer says.

“We engaged a state police escort to make our way safely down,” adds Shoop. “We also needed overnight security, so a ranger stayed with the tent once everything was set up.”

It took 180 man hours for a set up over the course of three days. Cullmer says his team would put in full days working from 9 a.m. to 6 p.m the week leading up to the event. The day before the gala, they stayed from 9 a.m. to almost midnight for their focus call – once the sun set, the team focused all the lights on florals and around the tent as directed by Cullmer, fine-tuning everything. 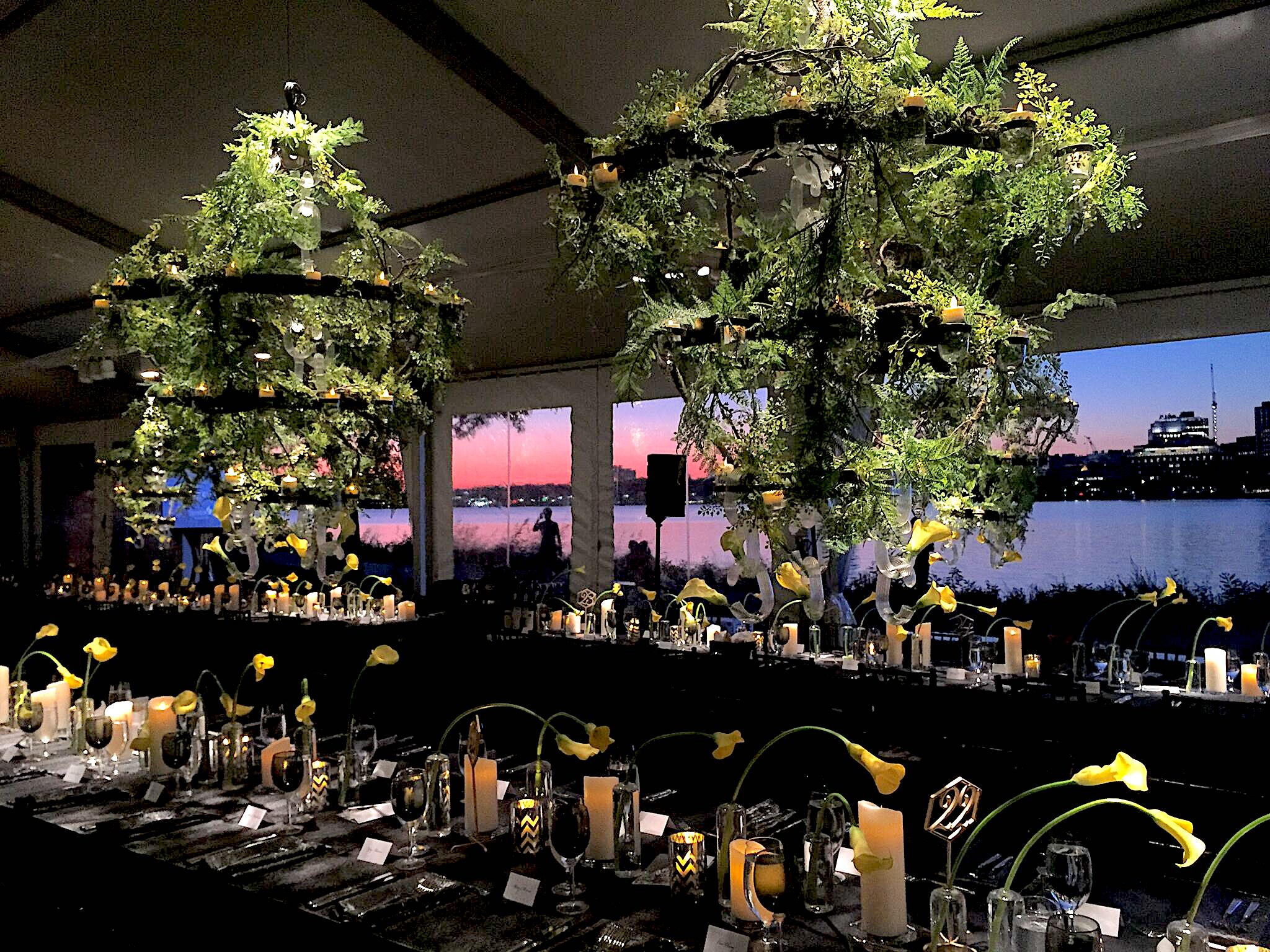 It was all worth it for the 450 guests’ reactions upon entering the tents.

“People walking into the room were wowed,” says Cullmer. “The drape was pulled back and everyone had their phones out taking photos. Everyone really enjoyed it.”

But the work isn’t over for the team when the event ends. Frost coordinated a complete overnight strike and load out; the process of packing up and transporting everything back to the warehouse for counting, cleaning, and restocking wasn’t complete until 10 a.m. the following day.

So, what was the takeaway for the Frost team after 516 feet of drape, 222 individual lights, 180 man hours, 23 people, three days of setup, and one dozen donuts for the crew?

“We always have fun,” says Shoop. “That’s why we do what we do. From an internal point of view, everything went successfully. We circled back Monday morning on this high from all of our successful events that weekend and said, ‘Wow. We did it. Okay, moving on, people, let’s go unpack the trucks and do it again.’” 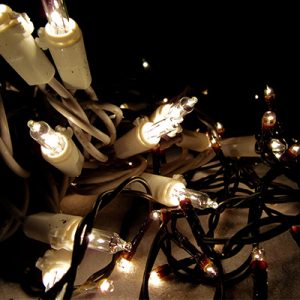 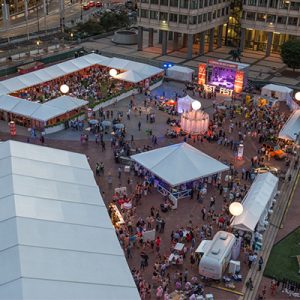 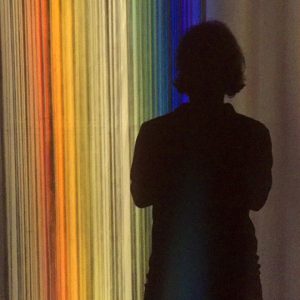 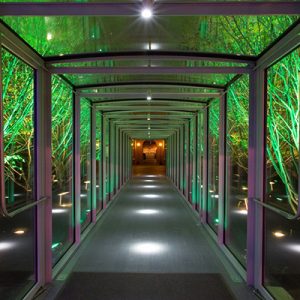