The moment cherry blossoms peep out from their winter cover, it’s time to discover all that Boston has to offer in the summer. If you are visiting from outside the city, establish a home-base at a boutique hotel centered in the heart of Boston. For history or cultural buffs, we recommend choosing a property that provides both modern, hip luxury and the experience of being a part of history, such as Ames Boston Hotel, located in what is believed to be Boston’s first skyscraper (built in 1893). Once you’re checked in, get out and take in the sights of one of the country’s most walkable cities. From luxury shopping and cocktails on a patio, to Back Bay history lessons and back-to-nature park strolls, Boston is yours for the taking. The tiny pink buds on the trees along Commonwealth Avenue aren’t the only ones coming out of hibernation. Boston transforms from a winter wonderland into a garden of lush flora in the summer. Stroll the lavish Public Garden for a whirlwind of color. This landmark, established in 1837, is the first public botanical garden in the country and is home to the famed Swan Boats, graceful paddleboats that move gently over the pond. And there’s nothing quite like picnicking on the adjacent Boston Common, the country’s first public park, only a five minute walk from Ames Boston Hotel. Walk in the other direction and you are steps from Faneuil Hall, the oldest marketplace in the country. Wander among the shops and the tchotchke-laden pushcarts, revel in street performer talent, and enjoy a favorite pastime of Europeans: people watching while enjoying an al fresco meal. If you want to revisit winter’s chilly temps, stop in Frost, the world’s largest permanent indoor ice bar. Finally, just steps away from Faneuil Hall, take in the Rose Kennedy Greenway, a contemporary park with seven water features and a carousel, and views of the harbor. Boston also affords several chic eateries with outdoor seating to fuel your summertime activities. You’ll gain coveted see-and-be-seen status at numerous restaurants around Boston with patios, such as Nebo on the waterfront, the casual Earl of Sandwich in the Boston Common, the trendy Stephanie’s on Newbury, and Sip in the Theatre District. Once you are refueled by lunch, take either a historical walking tour or saunter along Boston’s most famous shopping street. For the history buffs, follow the famous Freedom Trail: a 2.5-mile, brick-lined route with 16 historically significant stops, such as the Granary Burial Ground, the Kings’ Chapel Cemetery, and the Old State House. For those who want to return home with a few new items for their closets, choose enchanting Newbury Street, host to designers including DVF, Ted Baker London, Giorgio Armani, Chanel, and Valentino. We also suggest you find a few minutes to stop in any of the gorgeous art galleries along this upscale city street. Inspiration is available at every turn. No matter what your day holds, if your Boston hotel is placed in a prime location, enjoying the city in the summer is as easy as (Boston Cream) pie. 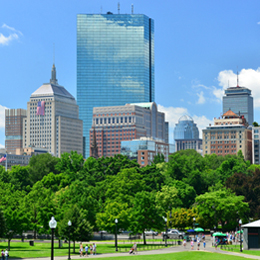 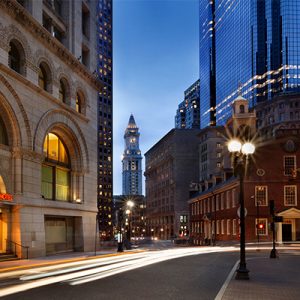 SPONSOR CONTENT Find Your Boston: Your Experience on a Silver Platter