What We’re Talking About Now: FEAR 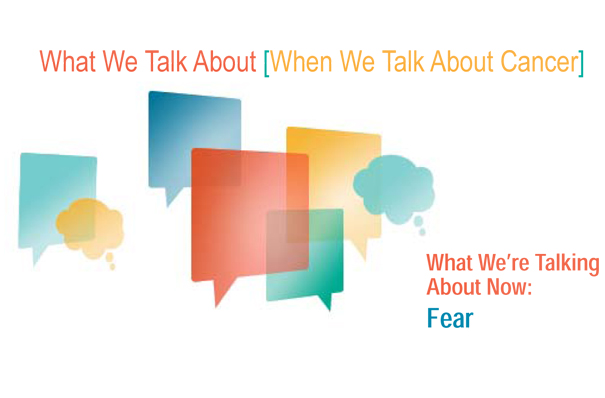 Each month, the Massachusetts General Hospital Cancer Center Community shares their thoughts on various topics related to cancer. This time, focusing on fear, we hear how people deal with this trying topic and what comforts them when facing these struggles.

When discussing fear in the face of cancer, three or four words jump out, which have interesting relationships to one another. Not surprisingly, one of the most commonly used words, when our contributors write about what fear means to them, is “afraid.” It’s no bigger than either “life” or “live” though, and several of our contributors made a connection between confronting fears in relation to cancer and embracing living. Patient Karen R’s poem about fear includes the lines:

…in order to go forward, your desire to live, should outweigh your fears and failures.

Erin O agreed that it’s a hunger for life (that “desire” to live) that can sometimes overcome fears:  “I refuse to spend my time or energy fearing something that “could” happen. That psychological stress is just as affecting to the body as physical stress. And I have a life to get out and live.”

The other biggest term on the word cloud this month is “think,” and several contributors wrote about how fear is an emotional reaction that can be either increased or controlled by thought. Steve H wrote about the ways we try not to think about our own mortality. His closing question, after writing about being made keenly aware of mortality by a family member’s cancer diagnosis—“what are we going to do with that newsflash?”—seems like a kind of call to us all to think more about our fears, not less, perhaps so we can use them to ignite a greater desire to appreciate life. Megan C’s perspective seems to answer Steve’s question, as she writes that she’ll “try to balance my new-found fear with an equally intense new-found appreciation” for the things in life that we sometimes overlook. Megan also raising another common thread on conversation on this word: That fears are much more extreme once an individual has children. Like Meg, physician Don D writes about his new-found fear now that children have come into his life, but stresses the way in which he uses his fear as “the impetus for me to prepare, love, and to the best of my abilities, protect, my children.” Again, fear seems consistently to be a driving force in our emotions and our actions, but many can turn that energy into something that we can use to our advantage.

As a result of fear then, Betsy B agrees with several other contributors when she writes that it is not about trying to live without fear, it’s about “a new way of thinking that fear can give us:”

“I’m curious about what we would consider to be the opposite of fear in this context.  Is it bravado or courage or strength?  I don’t think so.  I think it’s openness.  To be afraid is to be closed, in an effort at self preservation.  What if we balance that fear with openness—to new ways of thinking, new ways of living, new ways of eating, new ways of interacting with family and friends?”