What We’re Talking About Now: OPTIMISTIC 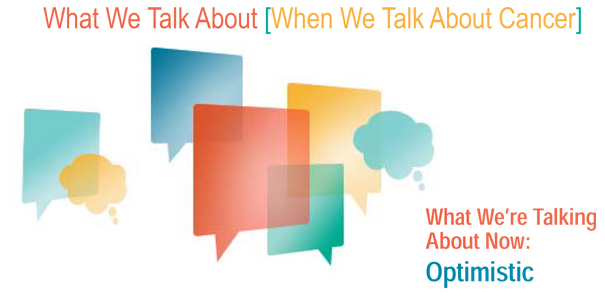 Our conversation on Optimistic continues on at Massachusetts General Hospital Cancer Center. This topic has provoked perspectives and comments with several similarities. For one thing, lots of contributors have been forced to reflect in a candid way about what being more or less optimistic means to them. At the same time, there seems to be an agreement that this word has an ambiguous and complex meaning. There is also a feeling among several writers that some of the ways Optimistic is used in our community are often not very helpful to those of us who want to feel it.

Patient Betsy’s post about the scarves she wore during her treatment, which one commentator described as “so authentic,” was a very moving story about trying to remain optimistic, but still feeling doubts that too much optimism might seem to be tempting fate. Her post circled around the question “Can my optimism be absolute, or has cancer robbed me of that privilege?,” and led to a response from Cynthia that included her own uplifting personal narrative. 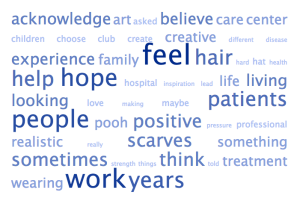 Mara wrote that she “chooses to be optimistic” and that this is perhaps her “biggest strength and sometimes a blind spot.” In the end, despite this doubt in her mind, optimism gets her though tough times. Her perspective ended with an interesting question, which many others also tried to consider in their posts: “Choosing optimism isn’t easy, but what do you have to lose?”

One writer who had a different point of view on the idea that being optimistic is ultimately a good thing was Megan. As a caregiver at the Cancer Center, she argued that patients can actually need and benefit from being able to express some less than optimistic feelings:

“Sometimes people who participate in our therapeutic groups seem to want a break from the unconditional optimism, and are looking for a safe space where they can guilt-free acknowledge thoughts and feelings that might not be so optimistic. There are also just as many people who come to groups looking for that support and inspiration to help them sustain their optimism…”

Optimism is certainly a complex concept. Steve wrote about both his ambivalence around the term, and the problem of assuming optimism is not realism. There is an odd tension between these ideas, which led him to wonder whether realism and optimism could ever really “coexist happily.” In the end, Steve felt there were still ways of making optimism helpful and useful to us:

“Maybe it’s about integrating the essence of optimism into our very fibers so that it’s not simply a fleeting mood or a form of self-deception. […] Sometimes we feel overwhelmed or sad. Sometimes we feel the basic unfairness of the disease. But, little by little, if we work at it, that feeling of optimism, that life is a wonderful gift, can work its way to our very core. Maybe, just maybe, that’s when optimism becomes something greater and becomes how we live.”

In a separate post, physician Daisuke seemed to disagree with Steve’s argument about realism and an assumed pessimism. He wrote that “not being optimistic does not mean that you are being pessimistic. In most cases, you are being realistic”, and that, in the end, we need to keep a delicate balance or understanding around this complex idea. As David wrote in one comment: “it is a matter of balance, and a matter of creating a community for patients, family members and practitioners alike that acknowledges and embraces the full range of feelings and attitudes that accompany the experience of living with cancer.”

As usual, we’ve also created a word cloud for this discussion, which allows us to see what the most common words from the conversation about optimistic have been so far. Bigger words on the word cloud have been used most often, and smaller ones less often. (We filtered out the keywords “cancer” and “optimism” and optimistic” from the cloud, since they were used so many times).