Located across from the ocean and a beautiful beach in in North Hampton, New Hampshire sits a newly renovated home that was at least partially built in the 1890s. What was once a functional coastal retreat for a couple from Cincinnati, Ohio, is now a spacious, open retreat that is located across the street from the ocean.  Rob Carty, AIA, principal of TMS Architects, designed what the owners hoped would be an “inviting space for extended family”.  They wanted the kitchen to be at the “heart” of the house, with open, casual places instead of a large dining room table. While staying closely within the original footprint of the house, the reworking of the interior was specifically designed to “open” the space to accommodate extended family and grand-children. The owners wanted the space to resemble the inside of the hull of a ship, while creating an expansive feeling within it. The owner, an artist himself, has uniquely creative taste, and builder Chris Ragusa of CM Ragusa Builders appreciated the detail and the customization that the project demanded. Having worked in carpentry for 25 years, Chris takes pride in the fact that each project is unique, one-of-a-kind construction. “We never build the same thing twice,” said Ragusa. The curved beams of laminated mahogany are but an example of the intricate craftsmanship, and the labor is sourced locally. They custom cut each molding from raw stock, creating the best materials in the finest expression of the project. The family room has a striated teak ceiling, reminiscent of the hull of a ship.

The pantry off of the kitchen was purposefully kept in the original “butler’s pantry” style, which, in its deep mahogany wood paneling and cabinetry, resembles a dark wood ship’s galley—a striking contrast to the sleek white kitchen. The color scheme almost resembles that of a sailboat, with a bronze semicircular counter top atop black painted columns that are strategically placed throughout the house, resembling a ship’s bollard. There is a small artist’s studio off the master bedroom, overlooking the ocean. The floor is beautifully crafted in marble, with a compass rose inlaid as a nautical motif and reflects the geometry of the mahogany ceiling above.

The lighting, courtesy of Newburyport Lighting, is a careful blend of ambient light and decorative lighting. Lamps are classically nautical—more yacht club than vessel, but still weaving the theme without overdoing.  The owners had a vision to commission a local Ohio artist to create a fully insulated stained glass “porthole” window, depicting a sailboat floating near the rocky shore. In the evening, the window casts a welcoming glow near the front entry

The exterior of the house evokes a feeling of a New England cottage, with a fieldstone archway that proudly acts as an invitation to enter the home. Above the turret sits a weathervane, hand cast by local seacoast artisan Walter Liff, owner of Steeling Nature. The sailboat is coated in gold-leaf, which is not only aesthetically pleasing, but is durable as well. This coastal gem is perfection in its uniqueness. The materials and design speak of authentic craftsmanship with a nautical nod. Detail and attention were not compromised in a very aggressive timeline as the whole project took nine months! 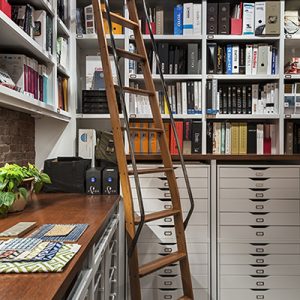