The "mobile ticket counter" is giving away flights out of town ahead of September 1st. 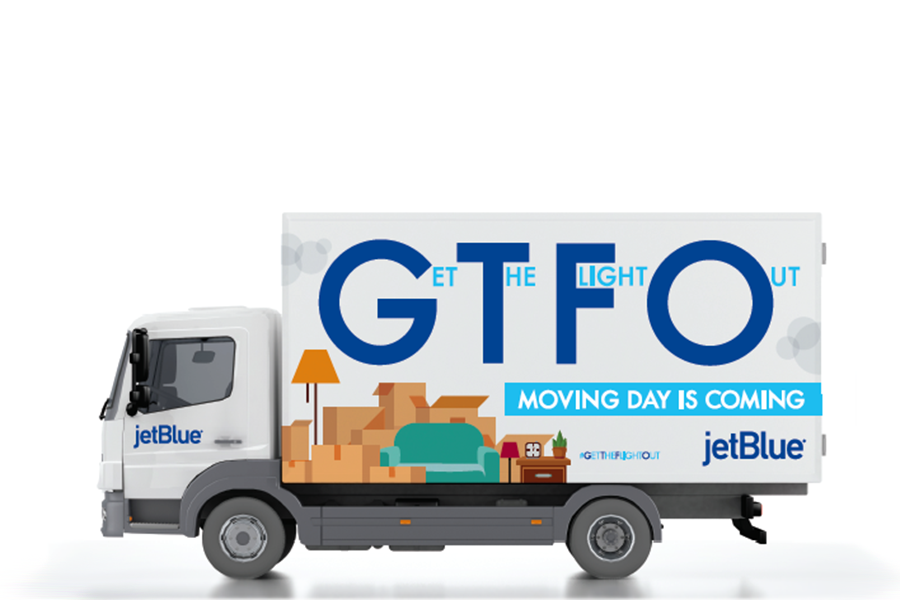 If you’re gearing up for a move on September 1st, good luck to you. And if you’re not, good luck to you, too. Even those of us who don’t have to lug boxes to a fifth-floor walk-up feel the pains of moving day in Boston. There is endlessly frustrating traffic. There is Storrowing. There is trash everywhere. There is a general sense of chaos.

Hopping on a plane to Punta Cana sounds pretty darn nice this time of year, and JetBlue gets that. That’s why the airline is giving away 20 pairs of roundtrip tickets out of town ahead of September 1st, allowing a few lucky folks—and one of their pals—to escape the horrors of moving day. The company’s “Get the Flight Out” truck, emblazoned with giant blue letters spelling “GTFO,” is making stops around the city so Bostonians can enter to win them.

On Wednesday, August 22, the truck (dubbed a “mobile ticket counter”) will set up shop on the Greenway from 12 to p.m. Then at 5 p.m., it’s heading to West Broadway in Southie until 7 p.m. The truck is also making two stops on Thursday, August 23. The first is from 7 a.m. to 9 a.m. on Washington St. near Brighton Center, and the second is from 12 to 2 p.m. on the Comm. Ave. Mall in Back Bay.

While the giveaway tickets will whisk Bostonians to destinations like Punta Cana and Grand Caymen, the truck’s ticket counter will also offer deals on other flights leaving Boston. And if it’s any consolation to the movers out there, JetBlue plans to hand out free snacks to the sweaty and tired masses on September 1st.