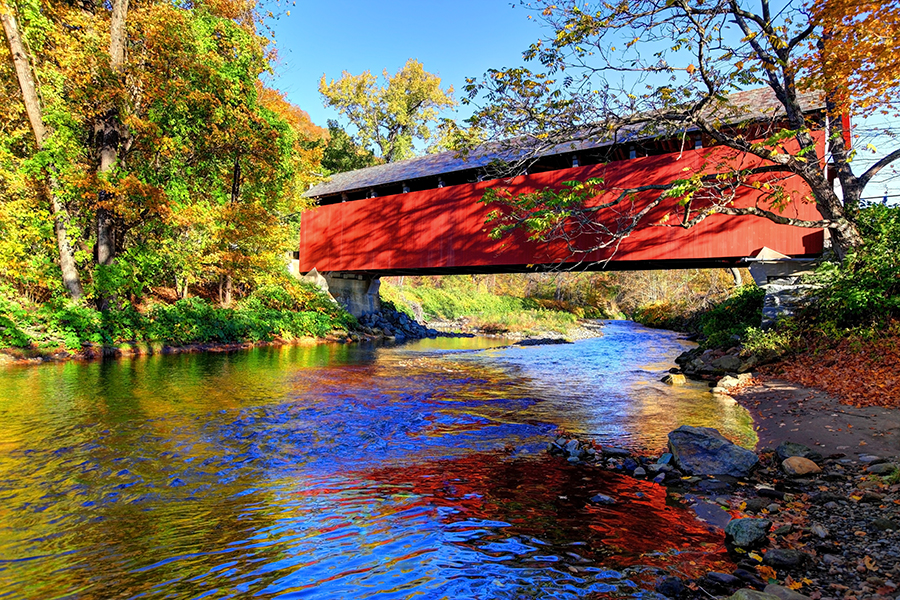 We’ve all perfected the art of the aimless drive this year, but if you’re looking for a bit of direction for your weekend leaf-peeping, it doesn’t get more enchanting than a good old covered bridge. They’re magical in the winter, arching over icy rivers; they’re lovely in the spring and summer, providing a spot of shade; and they’re breathtaking in the fall, nestled among a cornucopia of foliage. Below, check out five covered bridges you can find around Massachusetts.

If you were driving across this bridge on the night of September 1, 1969, you may have witnessed an alien invasion. So says Thom Reed, who was in the car with his family when all of the sudden: bright light, a floating object, and a memory of leaving the vehicle and encountering “ant-like” creatures. He wouldn’t call it an abduction, per se, but according to the Great Barrington Historical Society, it is an official historical event. You can hear Reed tell the tale himself in episode five of the Netflix docuseries Unsolved Mysteries, along with several fellow Sheffield neighbors who called into the local radio station to report spotting a UFO. Whatever your feelings on flying saucers may be, the classic covered bridge is a must-see pit stop before continuing up Route 7 along the Housatonic River into Great Barrington for your Berkshires day trip.

Though fire was set to the 100-year-old bridge in 1969, the uniquely-shaped structure was rebuilt in 1972. Then, after Hurricane Irene wrought extensive damage, the 19th-century bridge was restored in 2014 with a $1 million budget, and reopened to foot and car traffic. For architecture admirers, the history of preservation alone is reason enough to visit. But for those on the hunt for a Halloweentime fright, legend has it that there may also be a ghost haunting the premises: In the early 1700s, Eunice Williams, the wife of the Puritan reverend John Williams, was killed while crossing the Green River as a result of the Deerfield Massacre. Some say they’ve spotted her ghost by the overpass, also called the Eunice Williams Covered Bridge.

You can’t drive across the Burkeville Bridge, but you can certainly whizz through it aboard a bike. Built around 1870, it’s the oldest surviving covered bridge in the state, but some of its longevity may be due to the fact that it was designed with iron tension rods. Don’t miss the chance to snap a photo of the historical construction with a church steeple and the small, quaint town of Conway in the background. As for foliage, you’ll find a woodland full of it if you drive a few miles south to Conway State Forest.

Spanning the Ware river, this aptly-named bridge joins the towns Hardwick and Ware. From the classic red facade that greets you at the entrance to the lattice trusswork that lets sunlight spill into the roofed hallway, the 137-foot-long relic is a sight to behold. Built in 1886, the overpass has seen some repairs in the years since, including a restoration on its 100-year anniversary, but it largely remains the same striking structure that was raised almost a century and a half ago. Any shutterbugs wandering to this covered bridge will appreciate the composition of the long, gable roof, rushing river, and stunning canopy of orange and red leaves that surround the site in the fall.

This one may not be the oldest or the longest covered bridge around, but you’d be hard pressed to find one more picturesque. The little-known Western Mass. attraction traverses a babbling brook and even a small waterfall. The current iteration is actually the third bridge attempt at the North Heath Road site: The original was built sometime in the 1800s, then replaced with a lookalike in 1951, and most recently restored to its historical glory and reinforced with some modern concrete and steel in 2009. These days, you can breeze across the canopied passthrough in your car, or disembark and take a few moments to appreciate the view from the overlook.