Travel Guide: Lounge in the Lap of Luxury on Saint Barthélemy
Subscribe
Follow
I'm a scraper
This search result is here to prevent scraping


Travel Guide: Lounge in the Lap of Luxury on Saint Barthélemy

After a bumpy few years, this posh retreat in the French West Indies is back and better than ever. 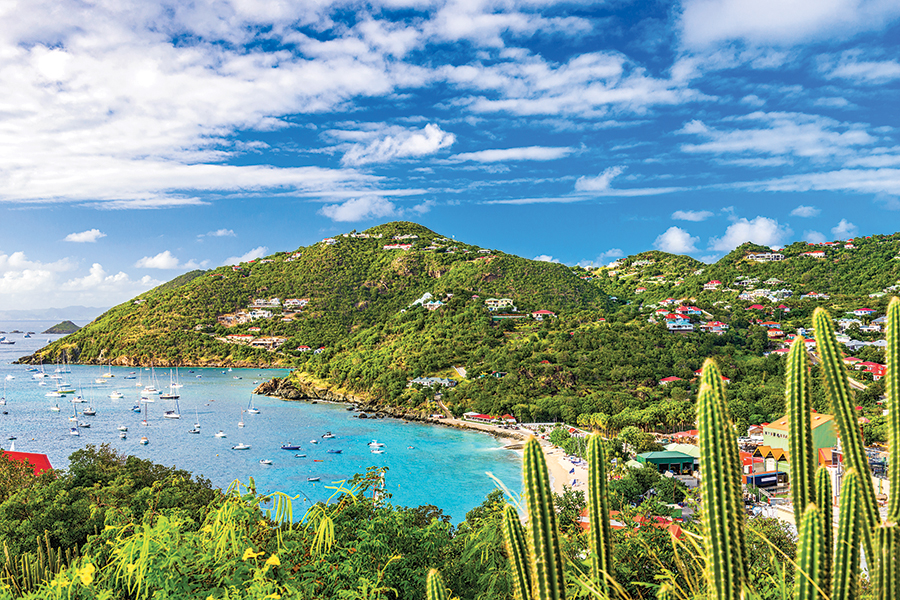 It’s nothing but blue skies (and turquoise water) on the island of St. Barts. / Photo via Sean Pavone/Getty Images

No two words conjure up images of a luxurious tropical paradise more than “St. Barts.” After all, the island boasts some of the most beautiful beaches, glamorous nightlife, and high-end shopping ($50,000 Louis Vuitton hammock, anyone?) of any island in the Caribbean. But even paradise isn’t immune to the vagaries of Mother Nature—in this case, the physical devastation of Hurricane Irma in 2017 and the financial devastation of the COVID-19 pandemic. Thankfully, St. Barts is once again open and ready for business. As of press time, there were no travel restrictions on U.S. passport holders, though visitors must produce a negative COVID test taken within 72 hours of arrival. In fact, both calamities have had at least some salutary effects: In the wake of the storm, the island’s notoriously potholed and badly graded roads have been rebuilt, and the ban on cruise ships until the foreseeable future means that if you do choose to make the trip soon, you can wander the quaint streets of Gustavia without having to dodge hordes of pant-suited retirees.

A typical day on the island might start with a skinny-dip at a clothing-optional beach, such as Governeur or Grand Saline, followed by a rosé-soaked lunch at Nikki Beach club and a siesta. Others might fancy a hike from Flamands to Colombier (the only way, other than boat, to reach one of the world’s most picturesque stretches of sand), capped off with a cheeseburger and a beer at the bumper-sticker-bedecked Le Select, which many maintain was Jimmy Buffett’s inspiration for the song “Cheeseburger in Paradise.” However, simply basking by the pool and taking in a hilltop view with the latest page-turner has a strange way of monopolizing one’s entire day in the French West Indies’ Land of the Lotus Eaters.

Despite the struggles of the past three years, St. Barts also has plenty of fresh additions to its dining and drinking scenes. The newly updated Le Carl Gustaf hotel, high up overlooking Gustavia Harbor, reopened last month with Fouquet’s bar offering a backdrop worthy of a James Bond movie to sip a martini while watching the sun go down over the red roofs. Sky Bar, a new hot spot perched atop the ever-popular nightclub Casa, is an equally scenic option for al fresco cocktails. As for dining, the recently opened Kinugawa dishes up contemporary Japanese cuisine, while L’Atelier de Joël Robuchon will serve elegant fare inspired by the most-starred chef in the world when it opens in 2021.

There’s a popular French saying: “Petit à petit, l’oiseau fait son nid,” meaning “little by little, the bird builds its nest.” St. Barts, then, is the Phoenix risen from the ashes, its feathers shinier than ever.

JetBlue flies nonstop from Boston to San Juan, where you can catch a direct flight to St. Barts on Tradewind Aviation. However, the island’s airport has one of the trickiest landings in the Caribbean, with an approach that requires the plane to bank sharply and a short runway that ends at the water’s edge. For squeamish fliers, the JetBlue flight to St. Maarten, followed by a 45-minute ferry ride to St. Barts, is a better alternative.

There are several options for a secluded getaway: The Christopher, St. Barts’ newest five-star hotel, is located in the quiet Pointe Milou part of the island and boasts three self-contained four-bedroom villas. Sibarth, a villa rental company, manages some of the island’s premier properties and boasts 24-hour concierge service, as well as butlers and personal shoppers: Staffers will even put up a Christmas tree for you if you ship your ornaments ahead of time.