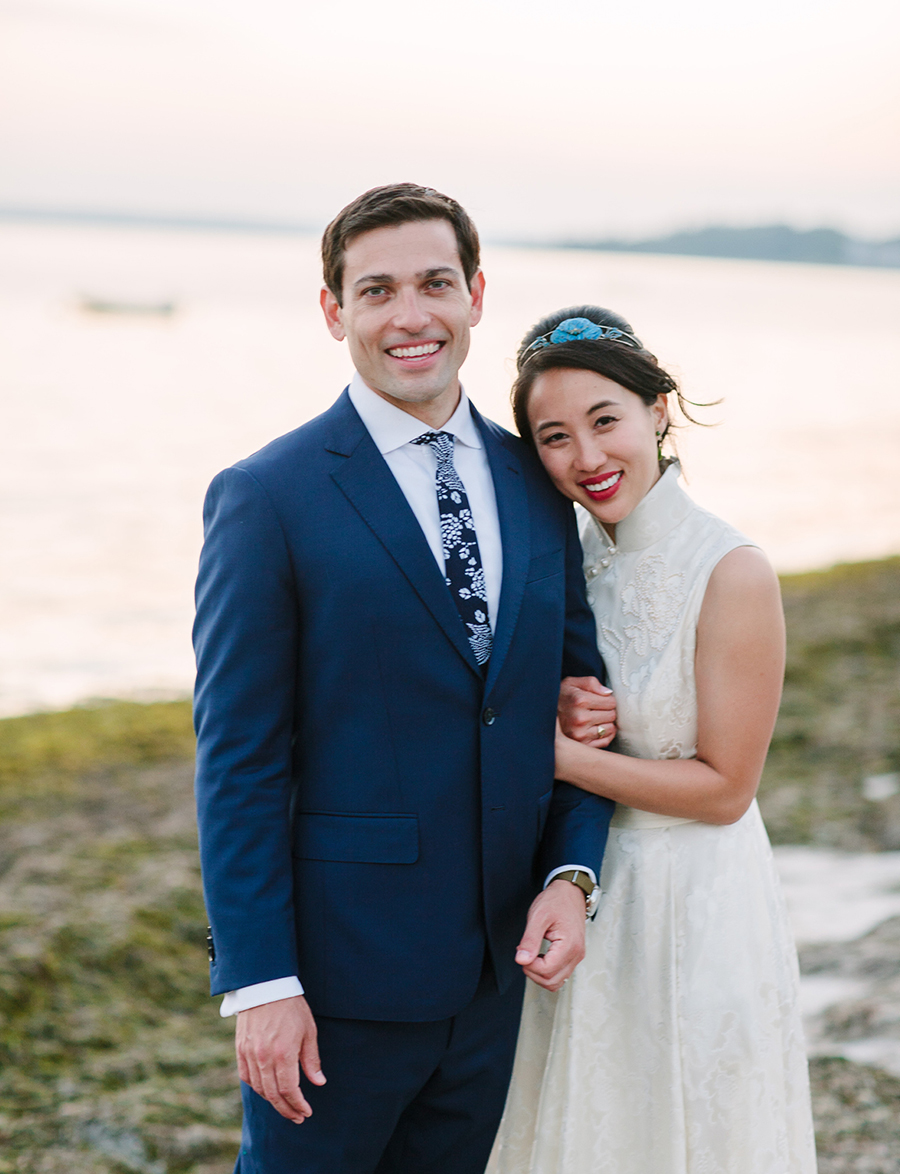 While Chinese brides typically wear all red, Amy opted for a silk-and-freshwater-pearl-accented white gown designed by her mother. / Photograph by Studio Nouveau

When it came time for Drew Morales to pop the question, his girlfriend had only one request: no grand gestures. “I strongly said I never wanted to be proposed to in public because people stare at you,” Amy Wang says. “Drew remembered. He woke me up early in the morning and proposed in our living room in the North End.” Of course, a grand gesture after the engagement was perfectly acceptable. “To celebrate, we went dogsledding in Québec City,” Amy recalls.

For their wedding day, the couple, who met as business school students at MIT, wanted something equally low-key. The oceanside Wareham rental home they found, then, was just the right fit for a weekend that fused their cultures (Amy’s family hails from China, while Drew comes from a Mexican-Italian background) with some very traditional New England touches—including a festive clambake on a private beach. “It was a great way to not have people travel very far but still have a mini vacation,” Amy says.

And a mini vacation it was, complete with cornhole, Bova’s Bakery cannoli, and an impromptu seaside basketball game the morning of the wedding, despite a lack of sneakers. In fact, nearly everything about the couple’s big day was transportive, including the fashion: Drew and his groomsmen donned huaraches, or traditional Mexican shoes, while the bridesmaids carried handpainted silk fans made near Shanghai. And whether the couple liked it or not, for once, all eyes were on them. 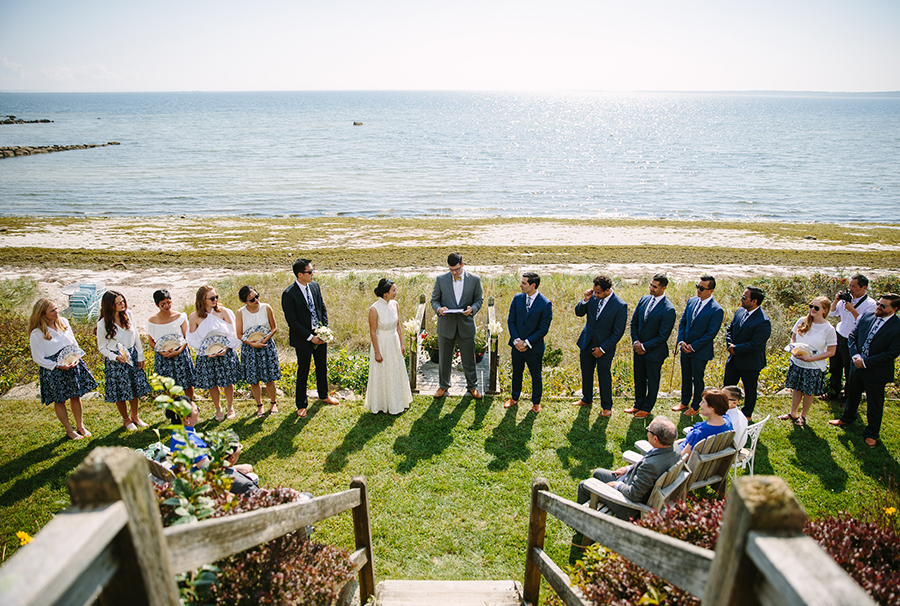 The couple tied the knot on a lawn overlooking a private beach. 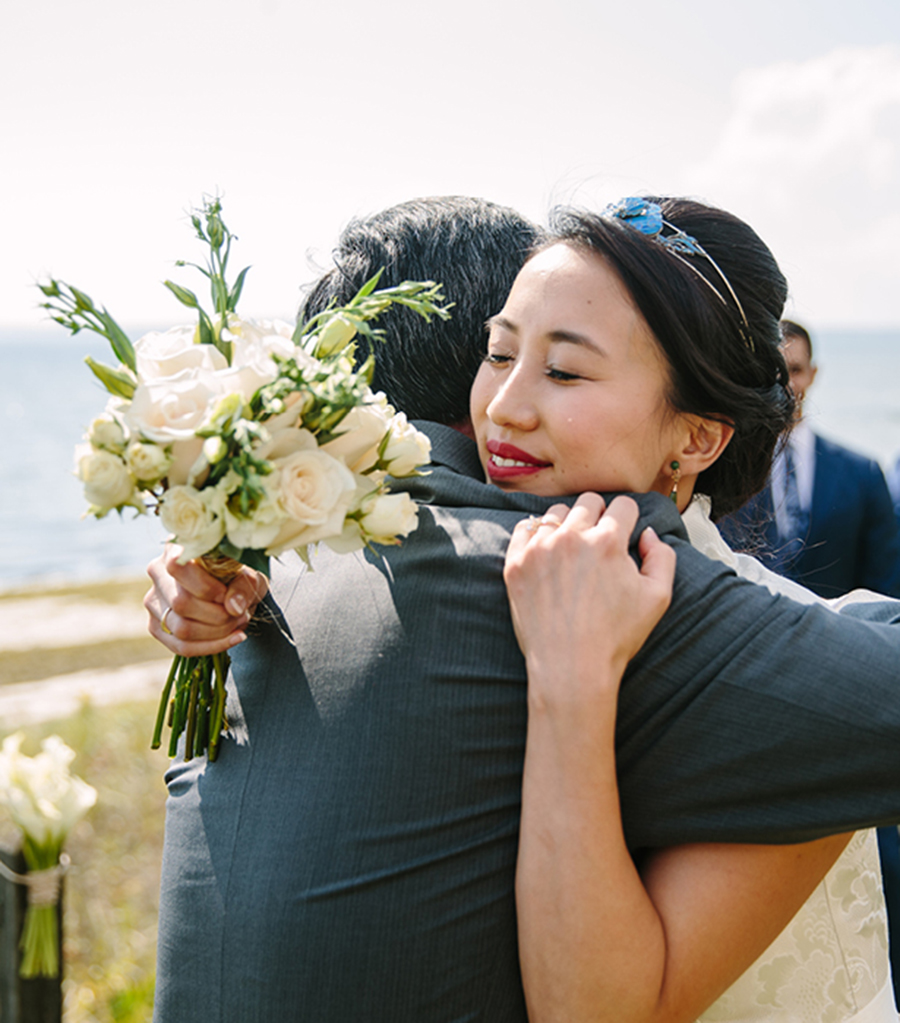 Amy carried calla lilies, lisianthus, and spray roses in white for her walk down the aisle. 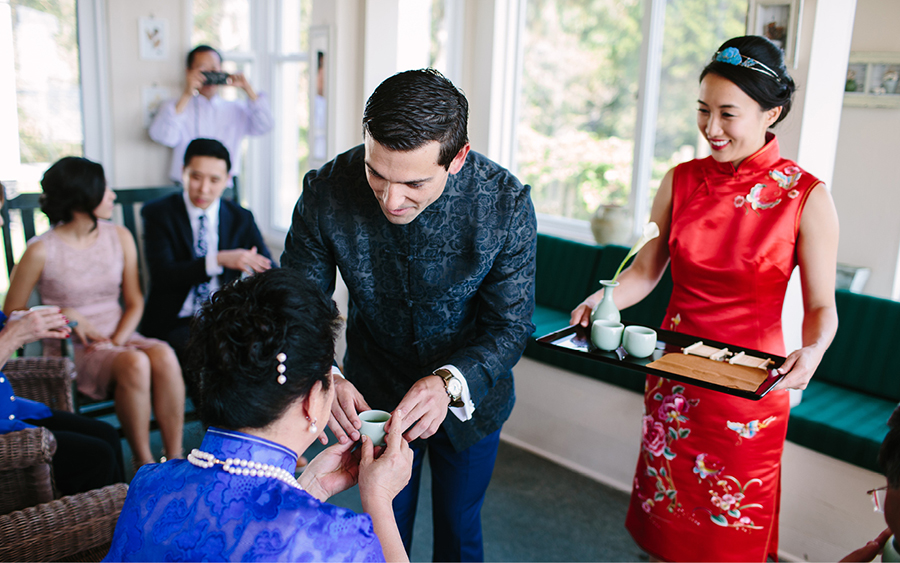 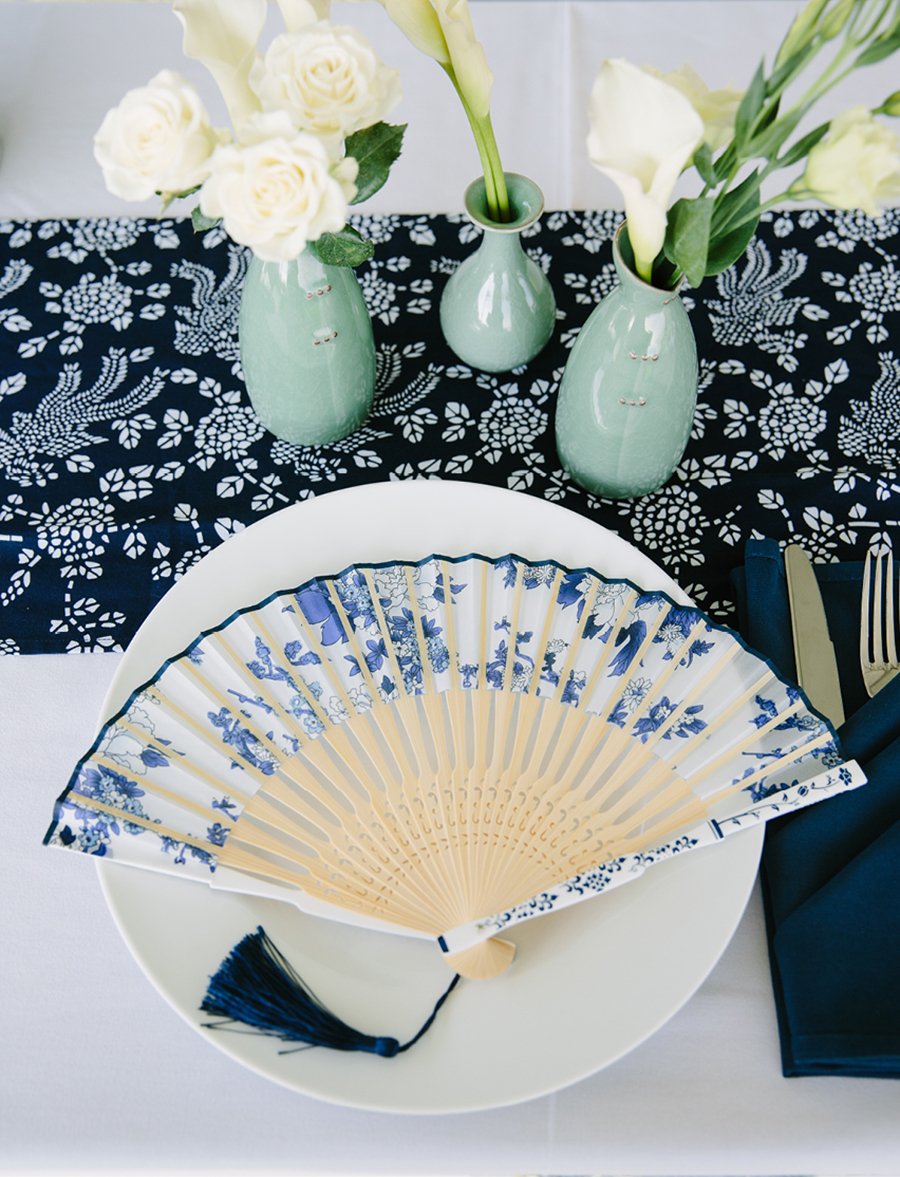 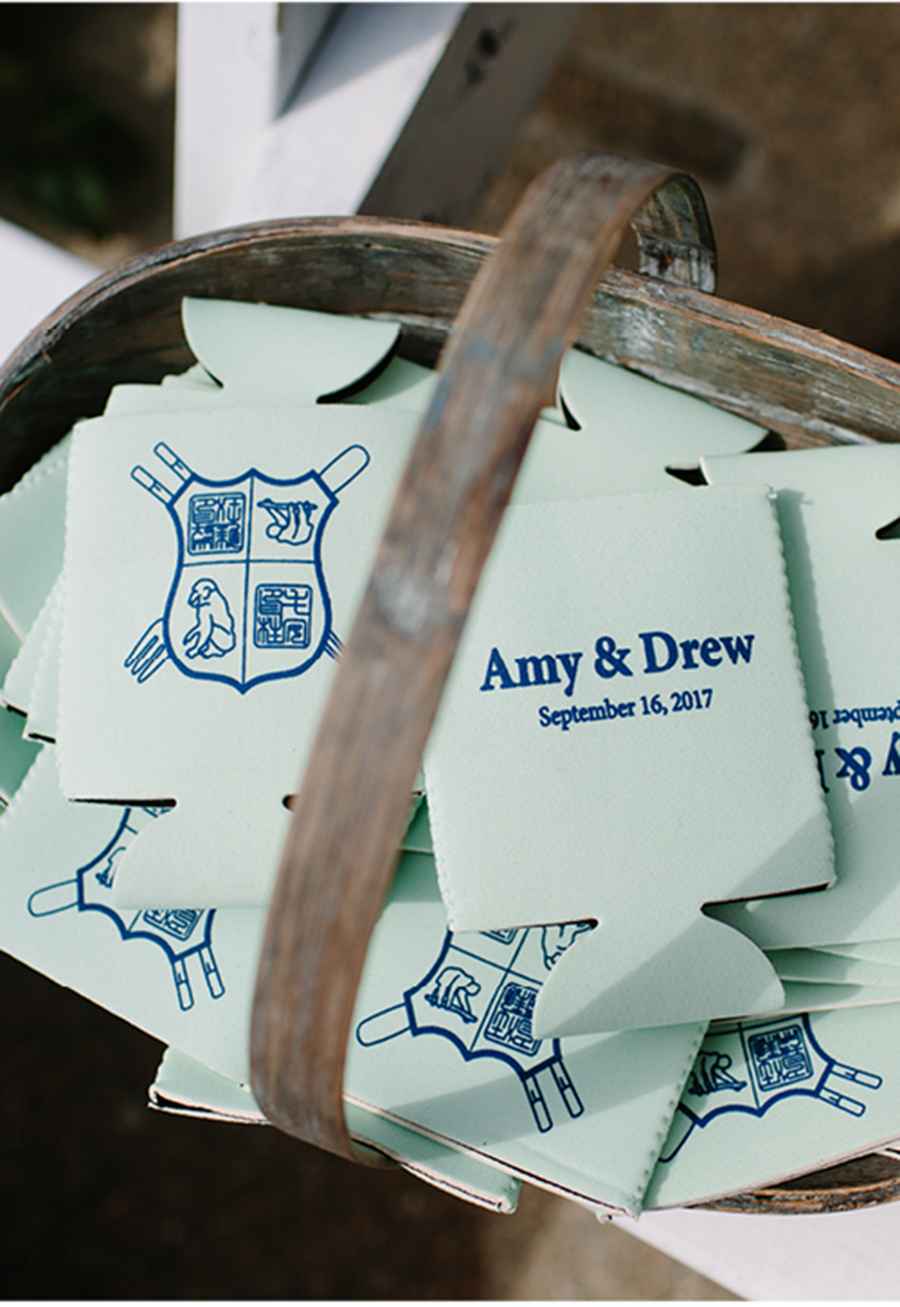 Amy and Drew ordered koozies online with a fake family crest featuring a sloth and a chimp (“our spirit animals,” Amy explains), and their names written in Chinese. 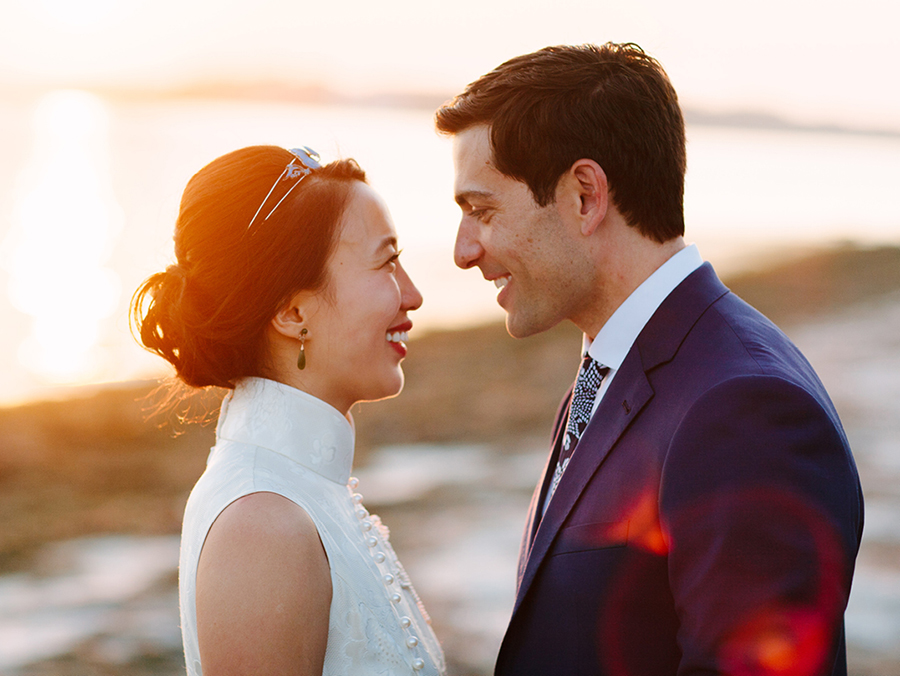 “One of my favorite things about Amy is how we tend to find many of life’s little expected formalities sort of absurd,” Drew says of the couple’s laid-back wedding day. 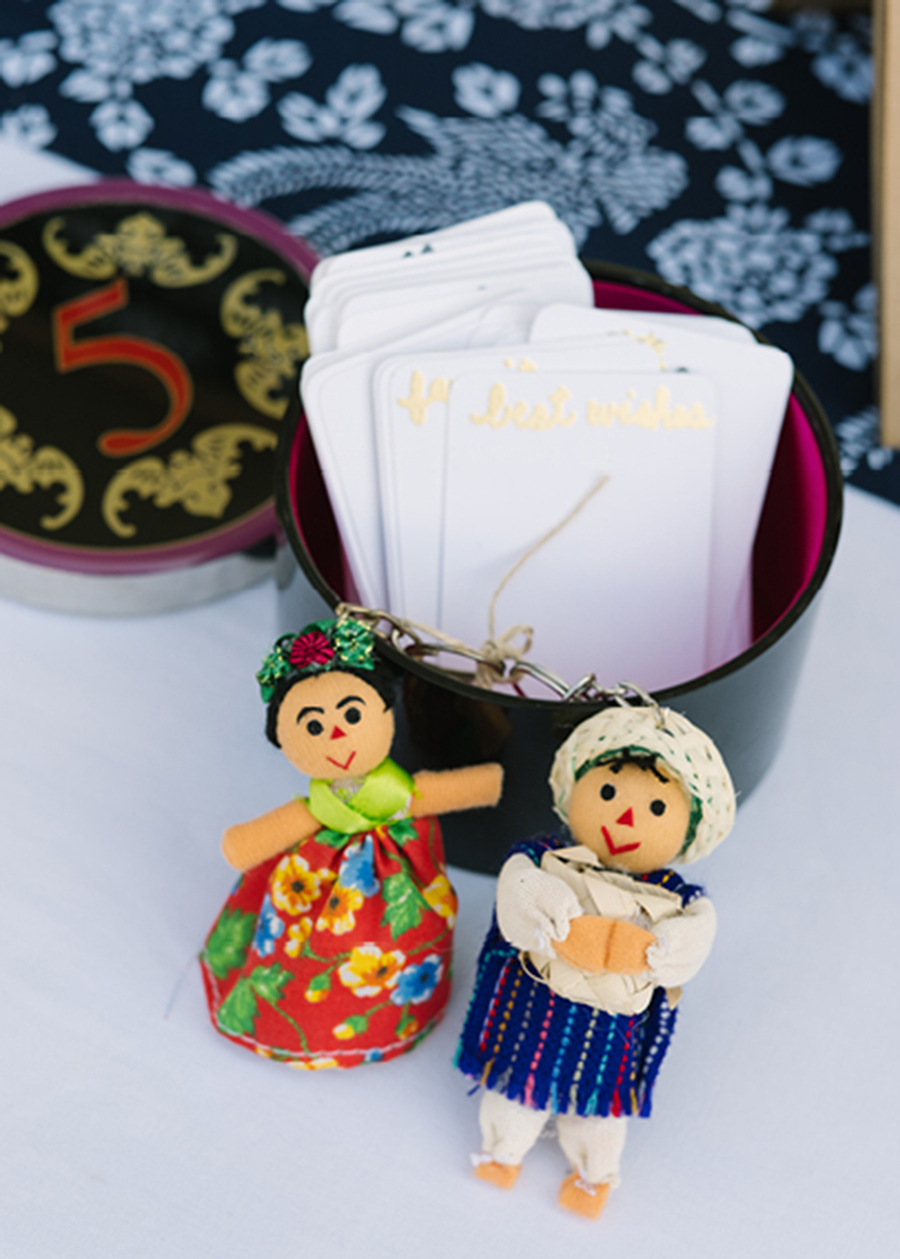 These bride-and-groom dolls were a gift from the designer of the huaraches worn by Drew and his groomsmen.