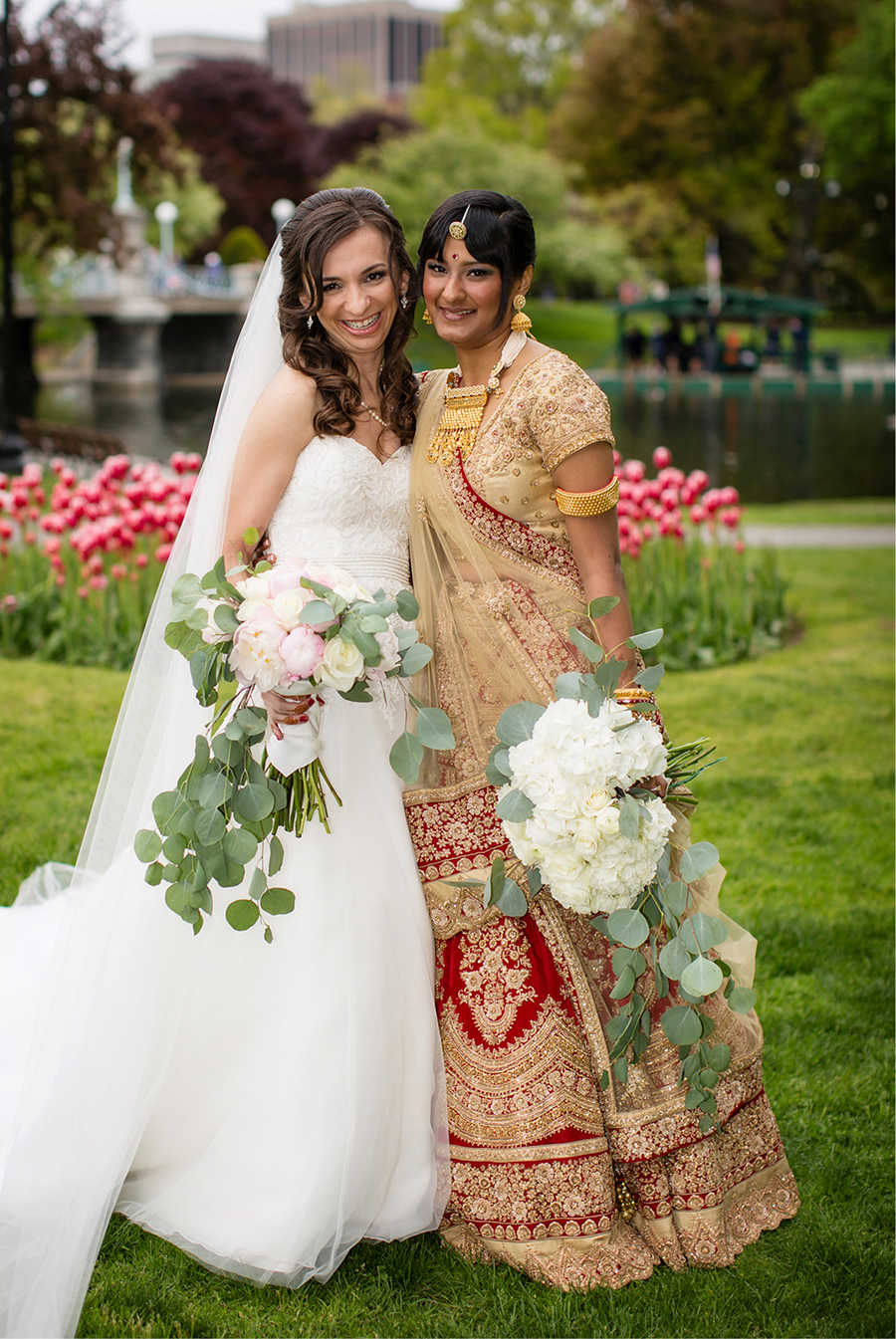 “Brides in my family always wear red or green,” says Shikha of her traditional Indian dress, though she changed into a gold two-piece number before the reception “for ease of dancing.” / Photograph by Person + Killian

On their first date, Shikha Goel and Channah Rubin discovered they had much in common: Both loved reading, being near the water, and dessert—especially the cannolis they shared that night while strolling through the North End. But when it came time to plan their wedding six years later, the couple decided to celebrate their differences instead. “We wanted the event to be a blend of our two cultures and religions,” Shikha explains. That meant searching for a chef well versed in both Indian and kosher cuisine, not to mention an interfaith officiant. Thankfully, the Taj Boston was easily able to fuse the pair’s culinary traditions, and Rabbi Jillian Cameron was happy to accommodate their cultural ones. The Taj’s stunning roof deck was just, well, icing on the wedding cake.

Once they’d settled on the venue, the only thing left to do was hash out the details. Since Shikha, who was in medical school at the time, was busy applying for ob-gyn residencies, Channah, who works for a software company, took the lead in planning—but in the end, it was truly a family affair. “We had the idea to enlist [our parents] in planning because it was helpful, of course, but also so they could get to know each other and learn what was important to the other side,” Shikha says. Both families, after all, were compromising a bit on their traditions. “By the end, everyone appreciated that we were doing something untraditional, because it best fit who we are,” she explains. “We certainly didn’t follow any playbook.” 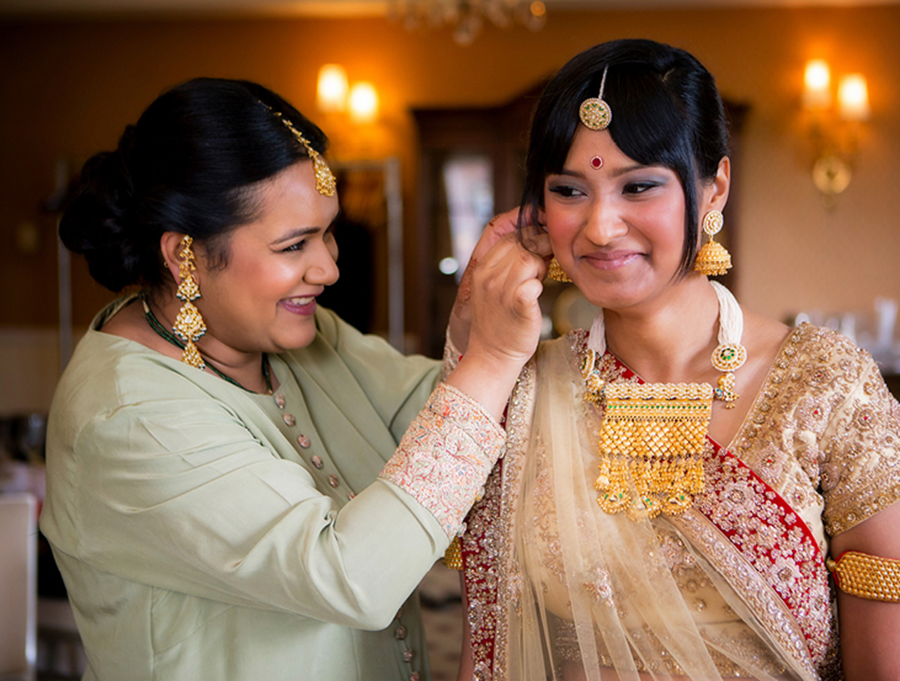 Shikha gets some help from her sister putting on earrings the family had custom-made in India. 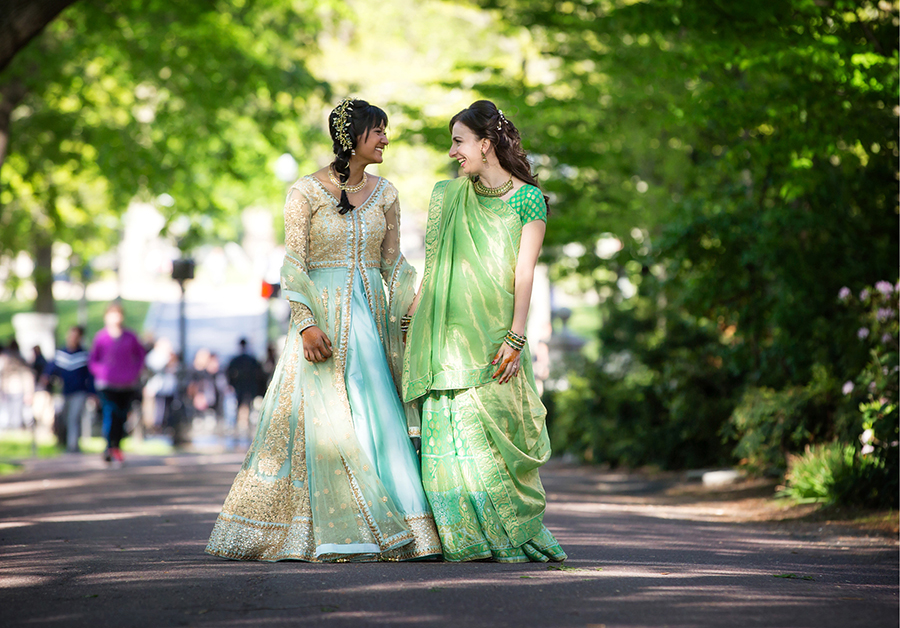 Both women wore lenghas for a cocktail party held the evening before at the Park Plaza. 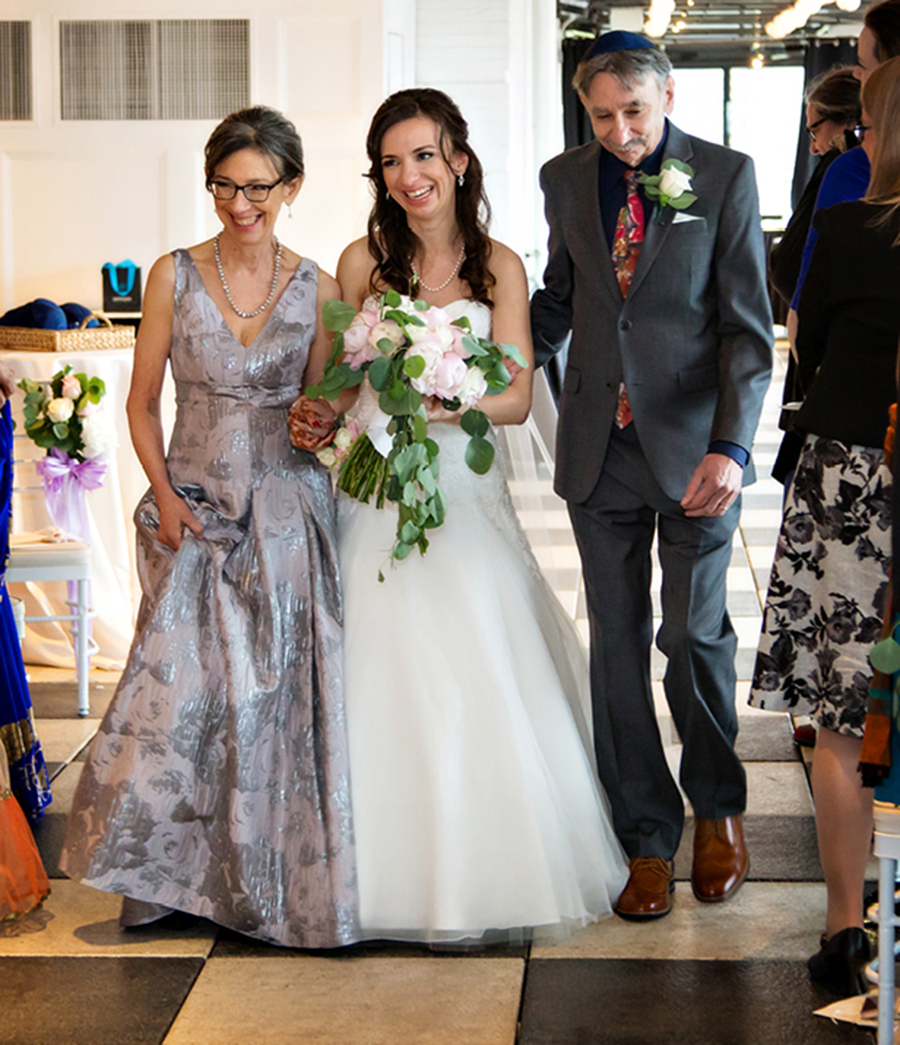 An only child, Channah wanted both her parents to walk her down the aisle. 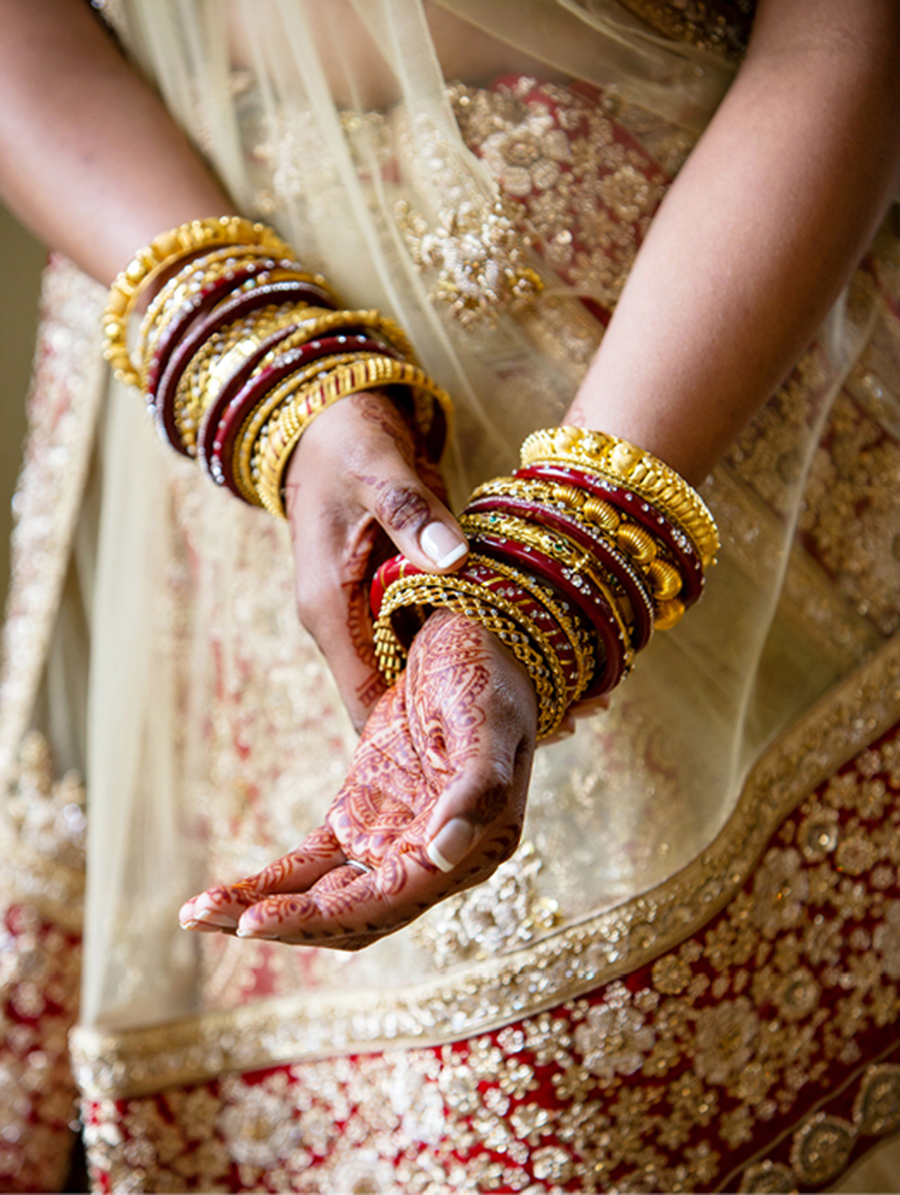 A friend of Shikha’s decorated guests’ hands with henna the night before the wedding. 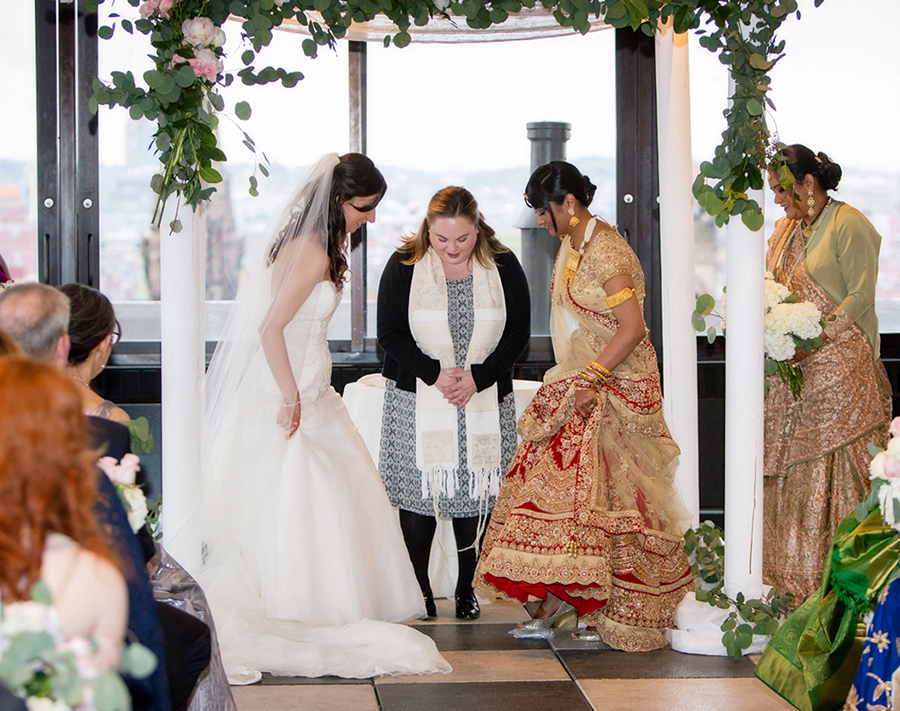 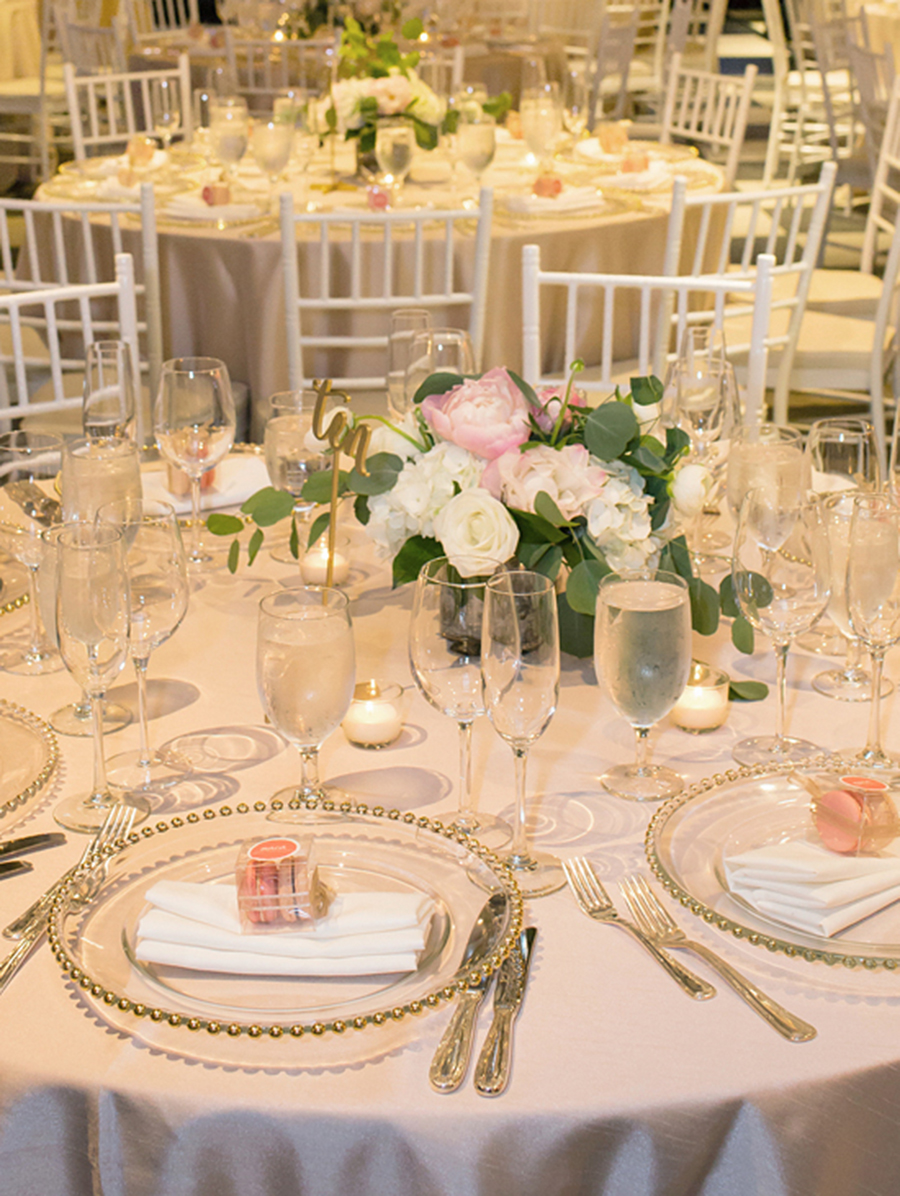