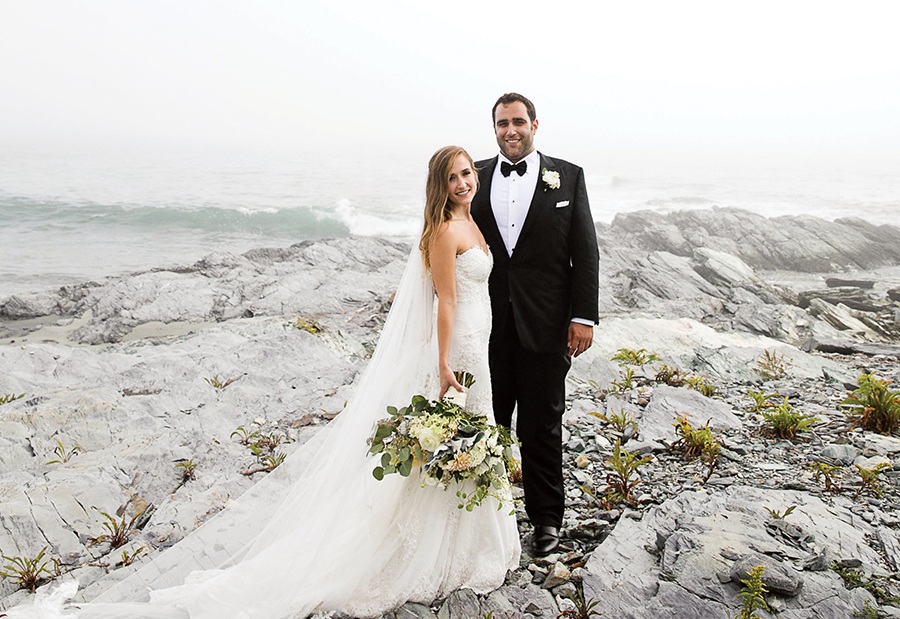 “The day started out sunny, then got a little overcast and foggy. But it was the perfect fog. It was magical and felt otherworldly,” Katina says. / Photograph by Corinna Raznikov

Alex Baren was bitten by the wedding bug even before popping the question. Not typically a planner, he surprised his girlfriend, Katina Fortunato, with a rooftop proposal at New York City’s Surrey hotel, complete with a candlelit path, soft music, champagne, and family waiting to jump out and snap photos. “I saw this beautiful setup, and I said, ‘I don’t think we’re allowed to be up here,’” recalls Katina, who thought they’d stumbled upon a private party. “Alex was like, ‘No, no, keep going.’ That’s when the waterworks started.”

For their wedding the following year, the couple quickly decided on an outdoor celebration at the historical Castle Hill Inn, where the bride—a native Rhode Islander—had spent summers as a kid. “I knew that it would be at Castle Hill from day one of even dating,” Alex says with a laugh. Katina imagined a romantic, garden-party feel for the reception under the inn’s waterfront tent, where a blush-toned palette with hints of green touched everything from the towering floral centerpieces to the ethereal bridesmaids’ dresses. The festivities continued well into the night: After the band played its last song at 11 p.m., the couple rallied friends and family for an after-party—featuring mini doughnuts, sliders, and fries—back inside the inn. “We were so surrounded by love, and that’s an overwhelming feeling to have,” Katina says. “I’m still on cloud nine from that.” 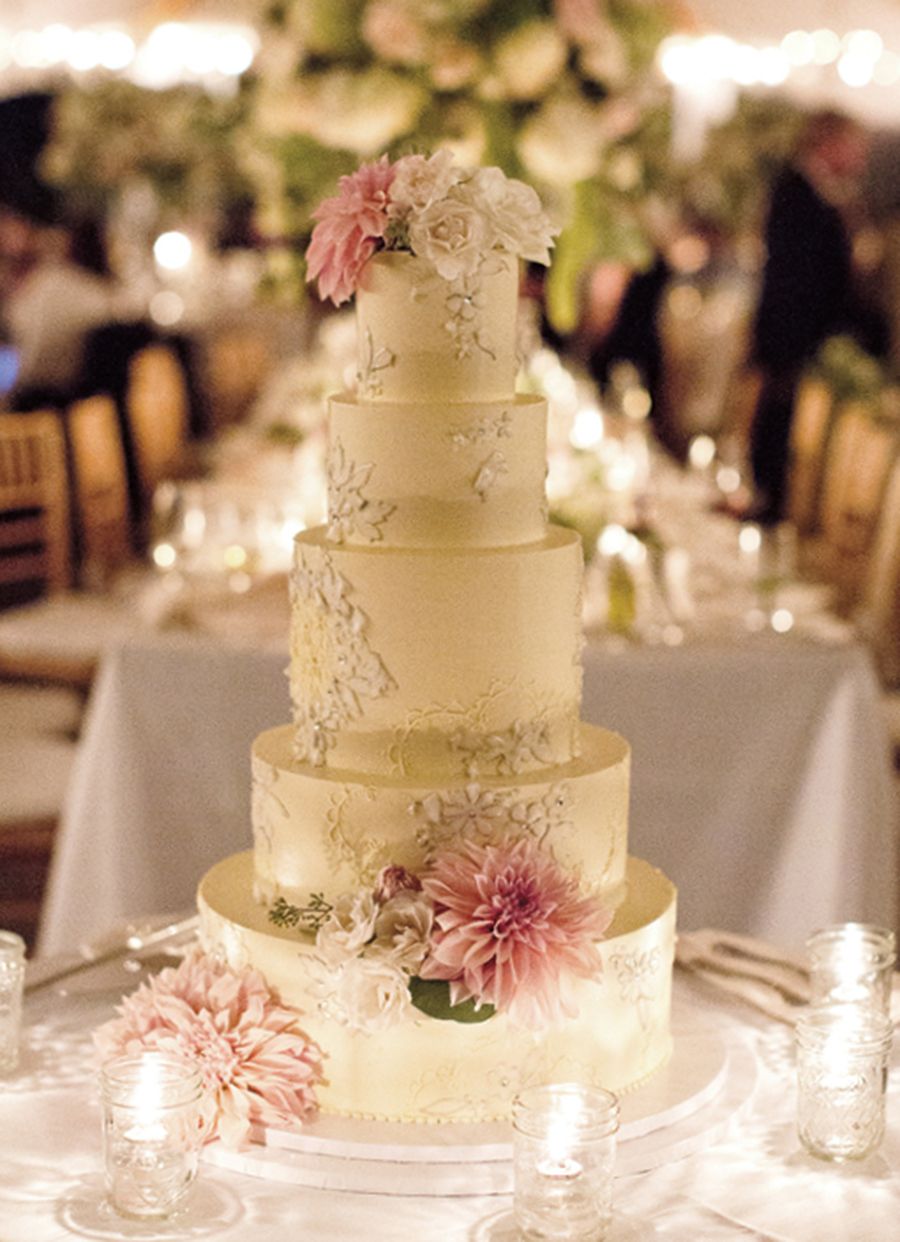 Confectionery Designs incorporated the lacework and beading from the bride’s gown into the detailing on the cake. 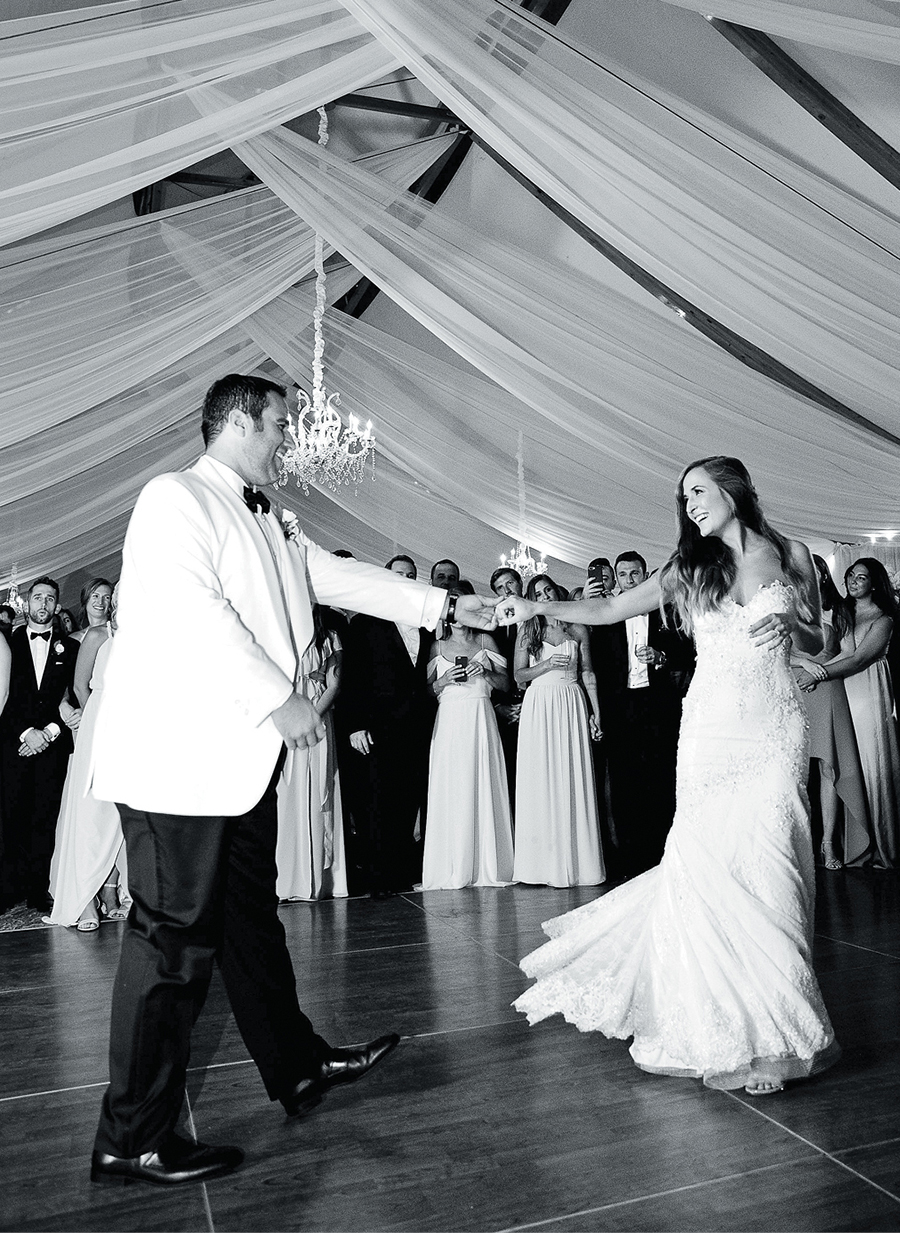 Alex changed into a dapper white dinner jacket for the tented reception. 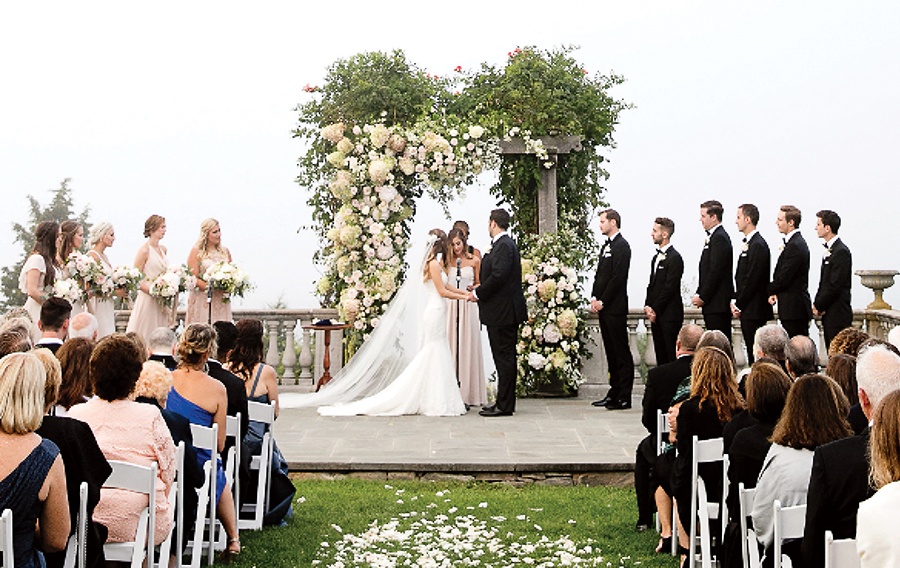 Flowers by Semia outfitted the ceremony arbor with an asymmetrical scheme of greenery and blooms. 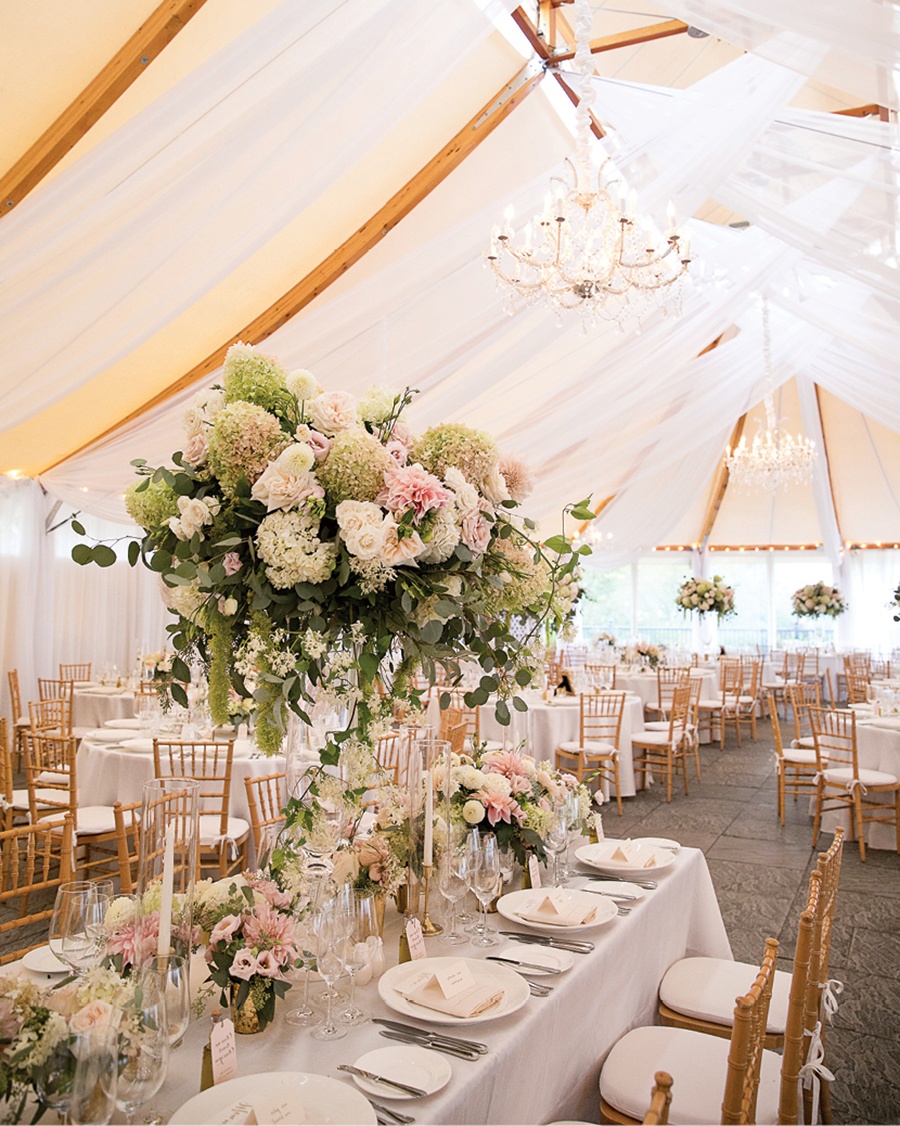 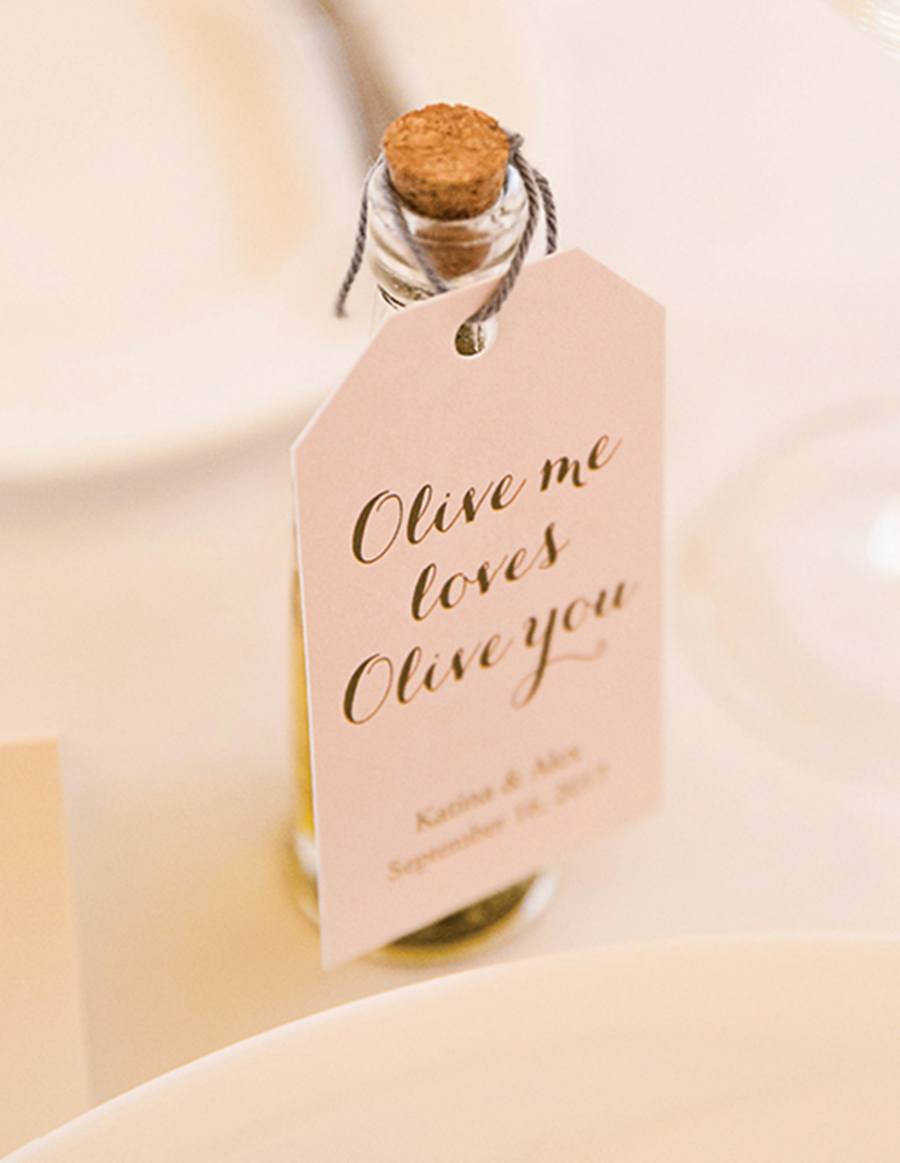 In a nod to their song—John Legend’s “All of Me”—the couple gave guests little bottles of Greek olive oil adorned with tags that read, “Olive me loves olive you.” 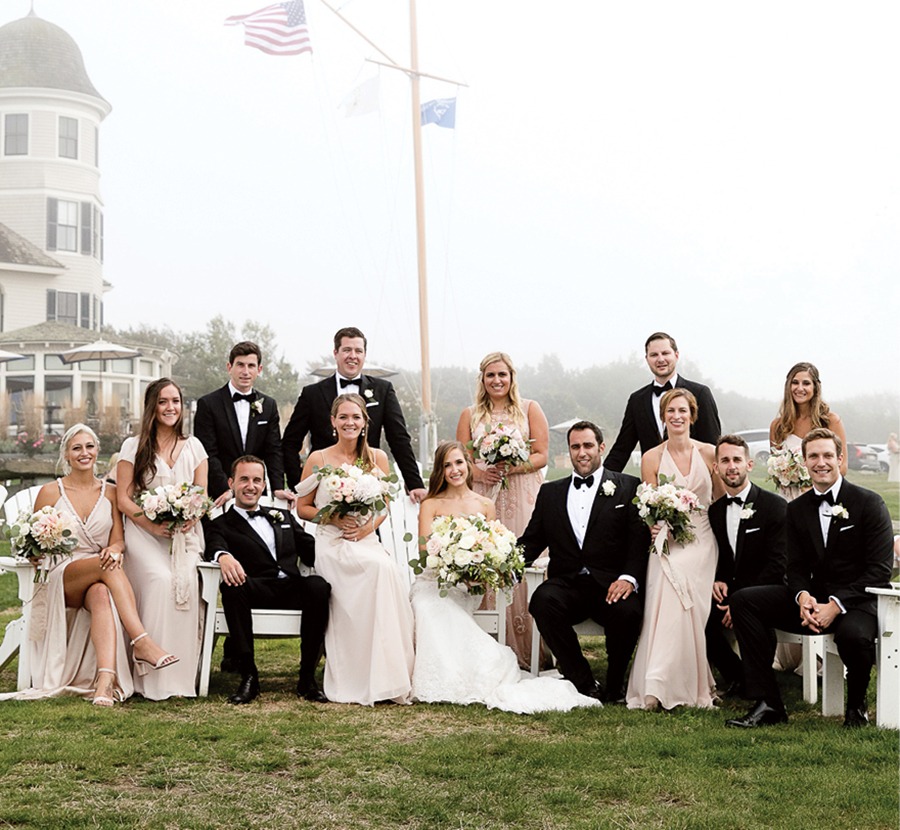 “All of the bridesmaids picked different dresses to suit their personalities,” Katina says. 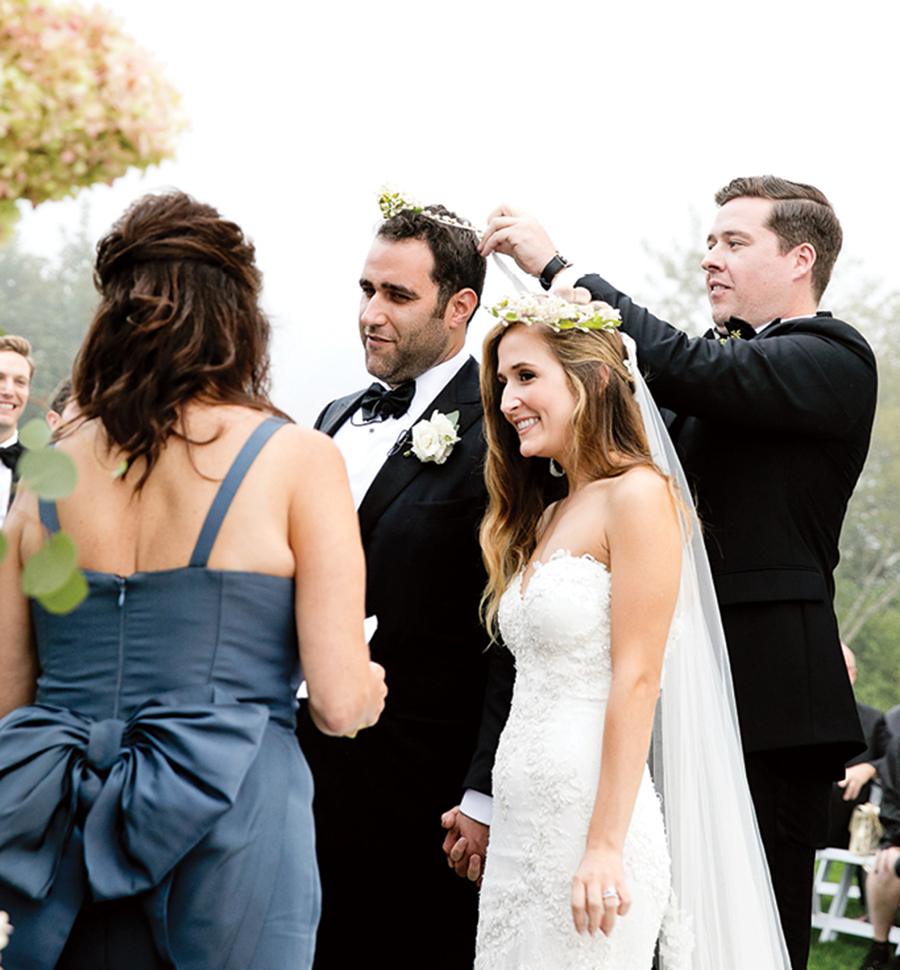 The couple worked the bride’s Greek heritage and the groom’s Jewish traditions into the ceremony by having Katina’s mother perform the Greek Orthodox crowning of the bride and groom, while Alex’s mother recited the seven blessings.