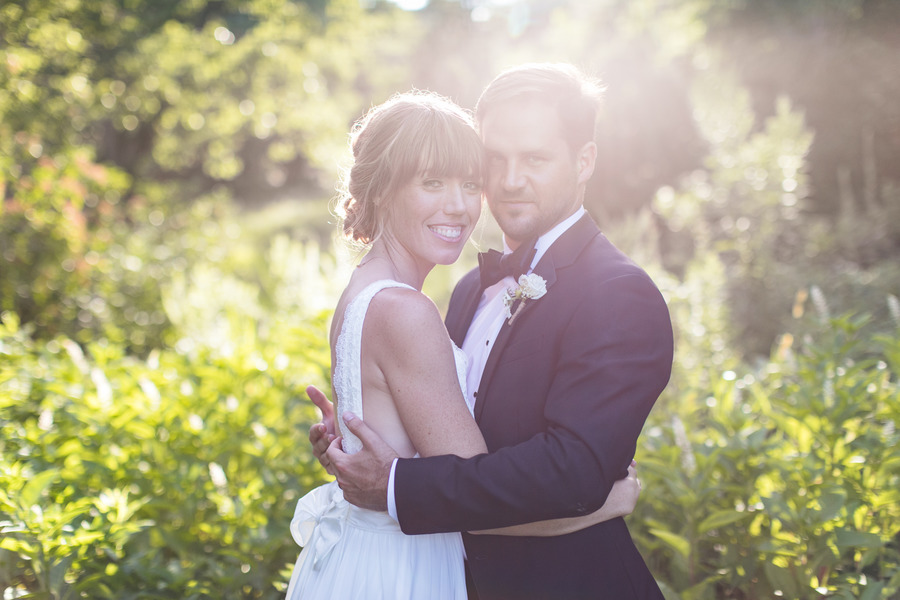 Shortly after Scott and Lauren started dating during their senior year at Boston College, graduation took them in similar, yet divergent, directions. They each spent three years in the Peace Corps—he in China, and she in Panama—while continuing their relationship long-distance. After making it through years of dating across the globe, Lauren says they “had a pretty good idea” they’d one day get married.

Eight years after they became a couple, the adventurous pair—who were once again living in Boston—fled town for a New Orleans getaway. They took a bayou kayaking trip where alligators swam beside them, and then headed off to explore Louis Armstrong Park, which proved to be an equally heart-rushing experience when Scott got down on one knee. “I’d been thinking for a while that he’d propose since we’d been together for so long, but he still definitely caught me by surprise,” Lauren says.

When the time came to plan their wedding, Lauren, a sustainable financier at the World Wide Fund for Nature, and Scott, who now works for Brightcove in Singapore, wanted it to reflect their laid-back, “outdoorsy” personalities. “We really wanted to take advantage of the natural beauty of New England and represent that,” explains Lauren, who grew up in Ipswich. They found the perfect venue in Beverly at the Estate at Moraine Farm, a Frederick Law Olmsted-designed landscape of lakeside gardens and enchanting wooded pathways. The property also boasts a charming teahouse, which the couple used as the backdrop for their ceremony. “We loved the venue because when we got the photos back it looked like we had been to five different places that day, but really they were all within a quick walk of each other,” Lauren says.

The pair also wanted every detail of the day to be personal and authentic. Lauren’s uncle officiated the ceremony, and friends recited some of the couple’s favorite poems. Lauren’s childhood bus driver, Bonny, even participated in the festivities, shepherding guests from their hotel to the wedding venue. “I asked if she remembered me and would be willing to work at our wedding, and she did. It was very sweet and really cool to see her,” Lauren says. At the reception, the couple and their guests danced the night away to Reggaeton music, which Lauren became fond of during her time in Central America, and songs by Louis Armstrong—a nod to Scott’s proposal. “I’d kind of always thought it was cheesy when people say, ‘Your wedding is the best day of your life’ because there are so many other unplanned things that are cool,” Lauren says. “But actually, having everyone around you at the same time is so humbling. You’re just like, ‘How are all these people here together and celebrating me?’” 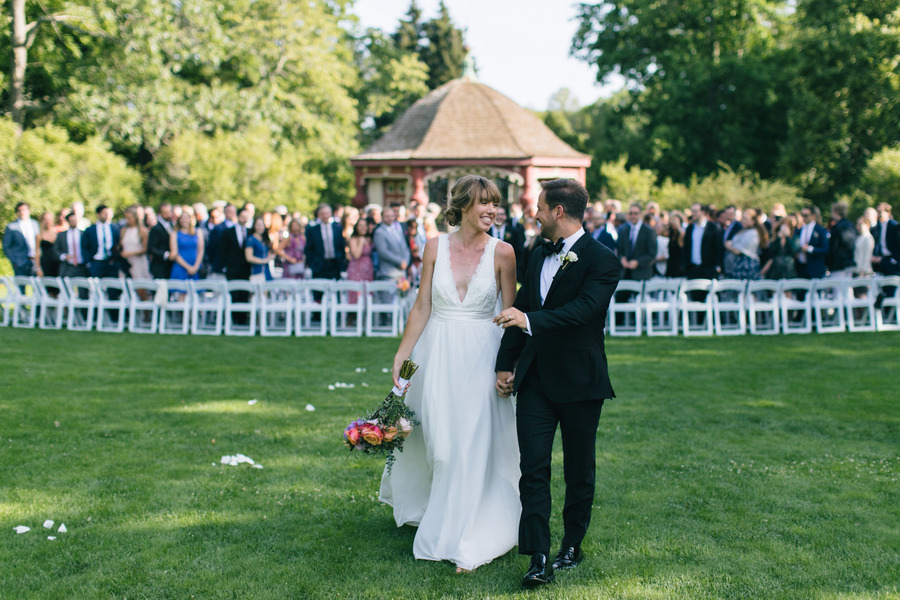 Lauren’s Truvelle dress, from Your Dream Bridal in Sudbury, was exactly what she’d wanted: simple-yet-detailed, comfortable, and—as she says—“not too froufrou or huge.” 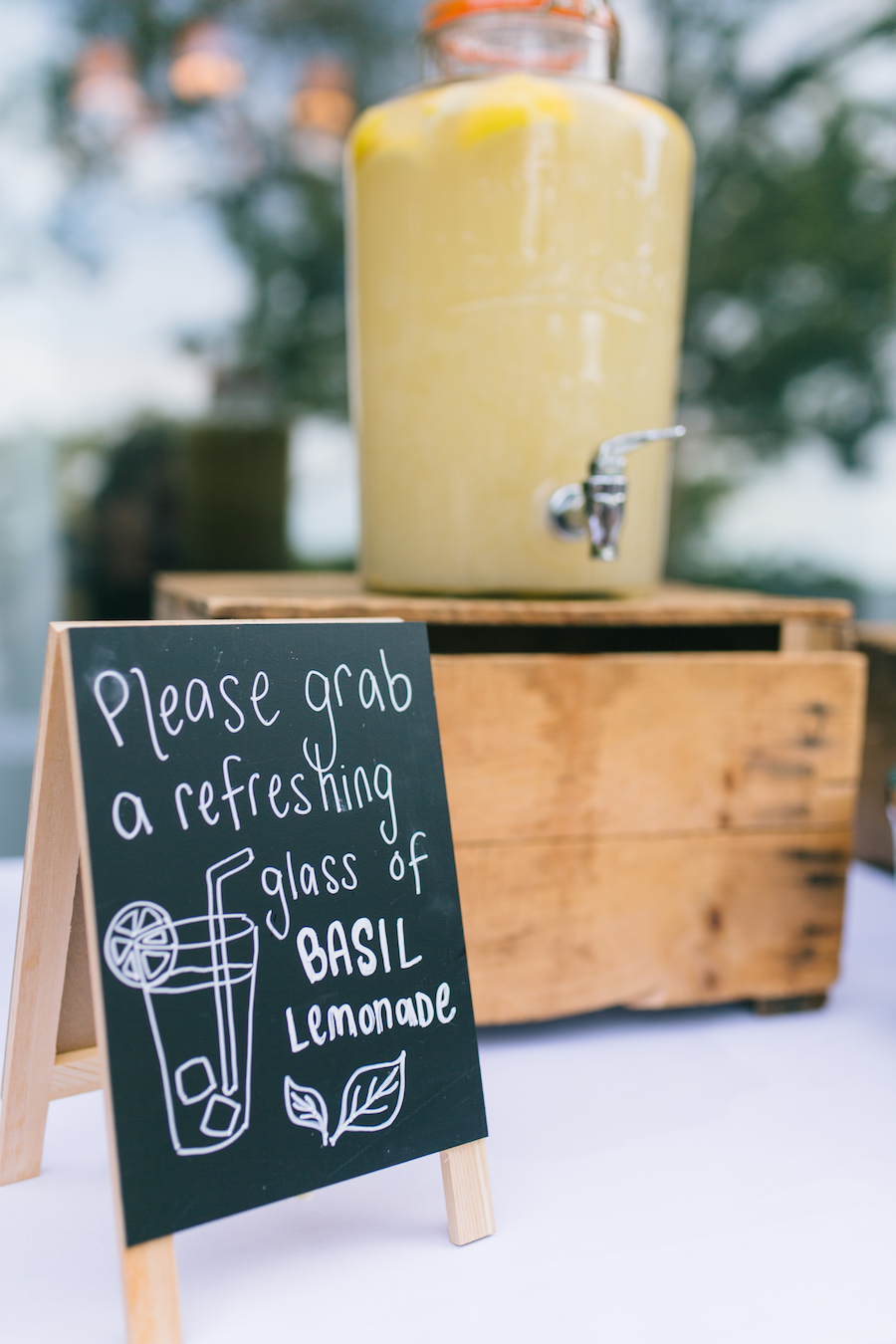 Lauren made all of the signs displayed at the wedding ceremony and the reception. “It was such a fun way to personalize it,” she says. 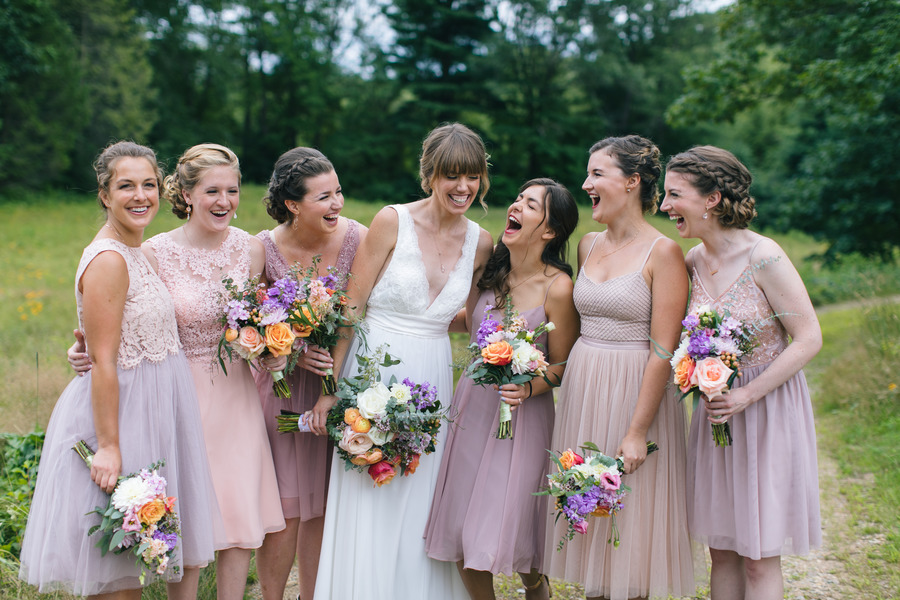 Lauren didn’t want her bridesmaids to feel like they were wearing uniforms, so each of their dresses—most of which were purchased at BHLDN—were unique. “I wanted everyone to wear something that reflected their own personalities, and also was comfortable for their bodies,” she says. 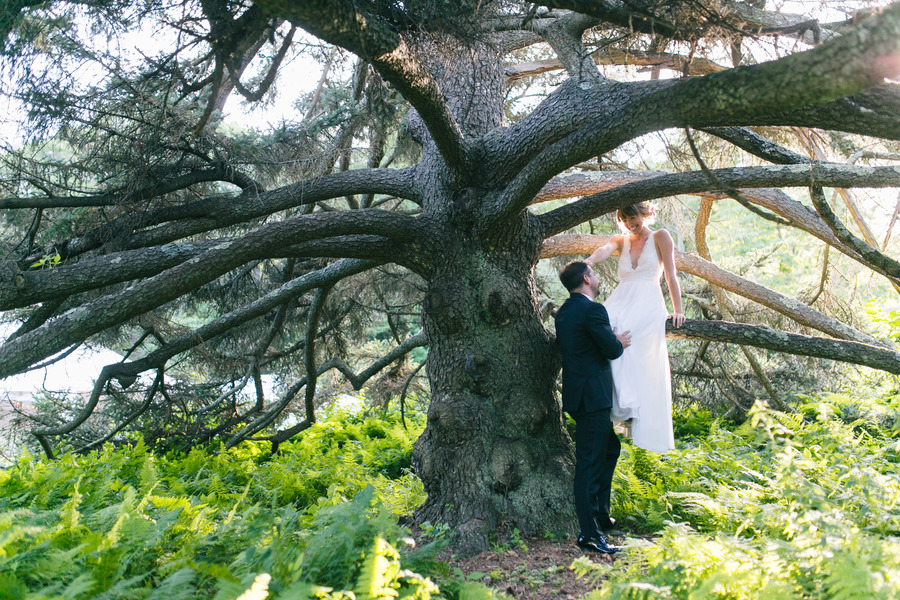 After the ceremony, Scott and Lauren snuck away to take photos under a large tree on the property. “It felt like being in this little enclave, like we were protected,” Lauren says. 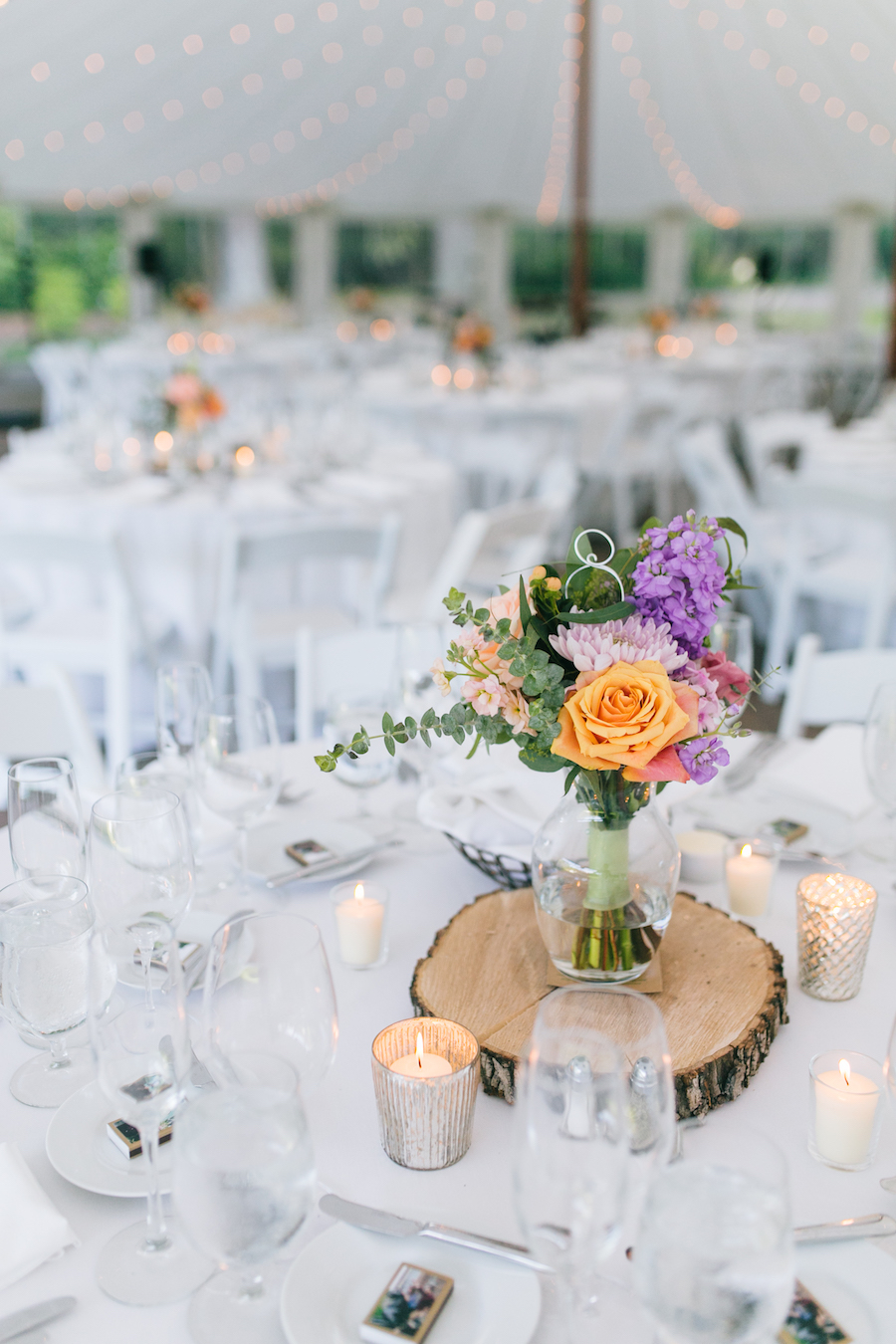 The father of one of Lauren’s childhood best friends owns a tree-service company in Ipswich. He contributed sliced wood for the tablescapes, which perfectly complemented the reception’s woodland aesthetic. 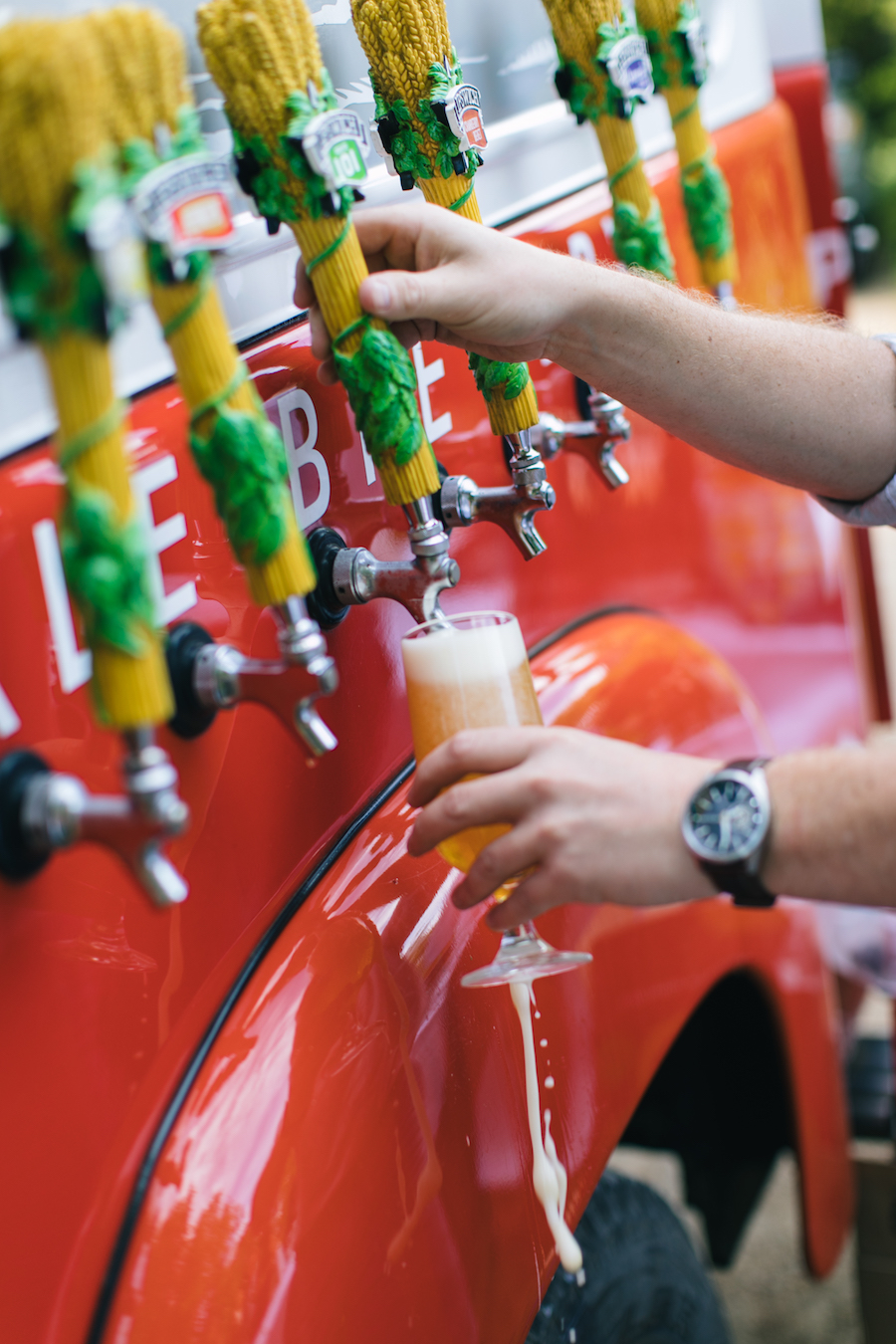 Lauren’s mom had spotted Ipswich Ale Brewery’s 1948 Dodge tap mobile at another local event, and Lauren and Scott loved its vintage flair. The couple customized the truck by selecting each of the beers on draft. 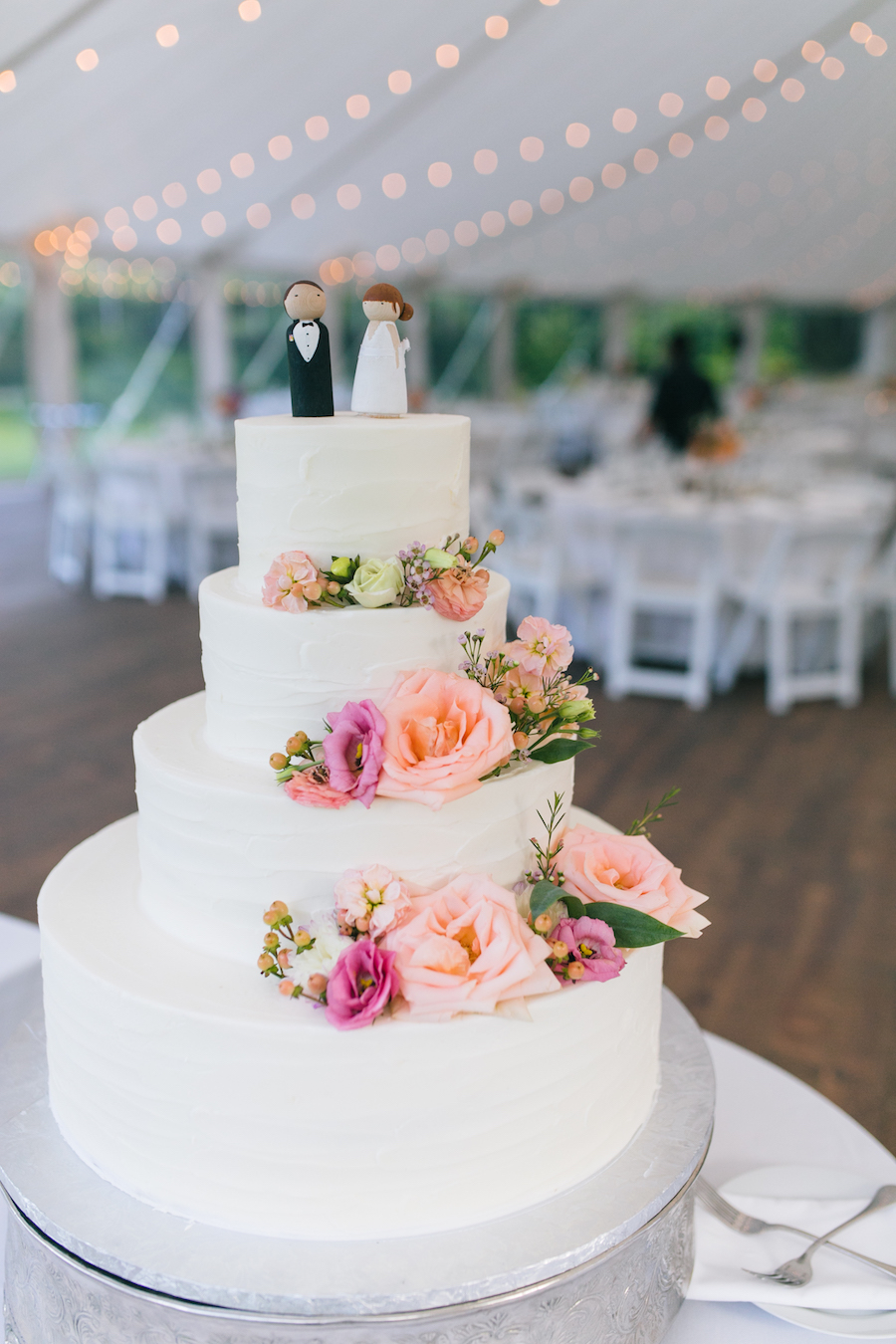 “We could not commit to one flavor. It was such a big cake, so we figured we might as well have a few,” Lauren says of the couple’s carrot, chocolate, and strawberry-shortcake wedding cake. Two wooden peg dolls, which Lauren purchased from Etsy and painted to resemble herself and Scott, topped the tiered confection. 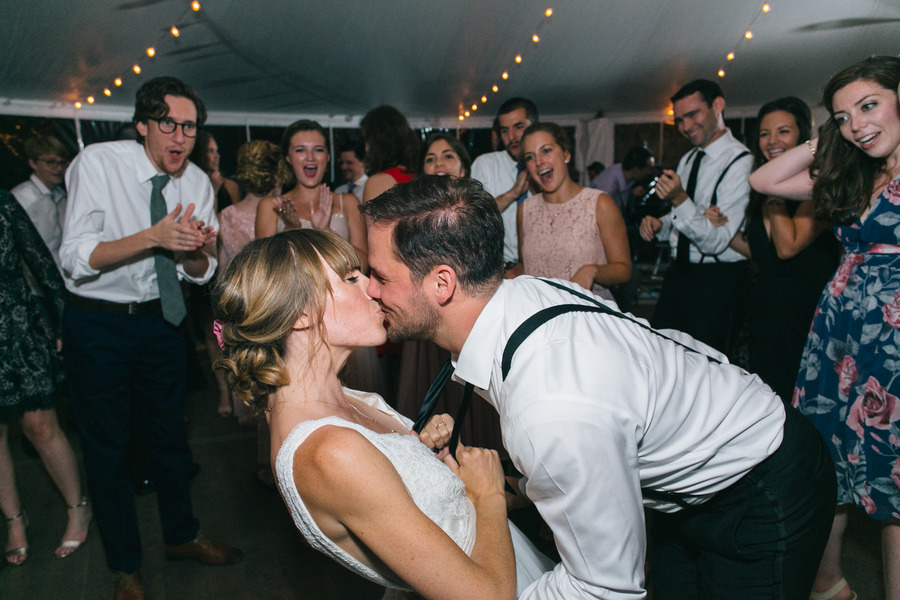 “Once dinner was over, we wanted the night to just be a big dance party, and that’s exactly what it was,” Lauren says.