The Lynnfield native and her Boston Bruins beau threw a fairytale-inspired bash in Newport. 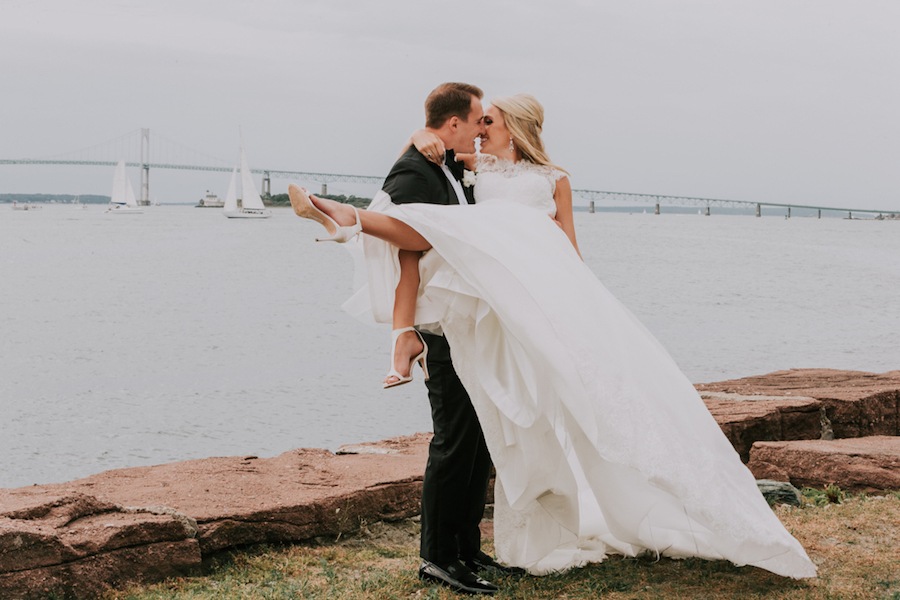 Kaitlyn Chisholm and Noel Acciari met during their first week as freshmen at Providence College in 2011, and according to Kaitlyn, they’ve been “kind of inseparable ever since.” In fact, a few weeks later, Kaitlyn says Noel, a player for the college’s hockey team, told a friend he’d marry her someday. As it turns out, he wasn’t bluffing. After the couple graduated in 2015, they later moved to the Seaport in Boston, where Noel joined the Bruins. On a Friday night in June 2017, Noel took Kaitlyn out to dinner, and then on a stroll along the Harborwalk, where they often brought their dog, Thor. When they approached Fan Pier Park, Kaitlyn spotted a circle of white rose petals on the ground. Noel brought her to the center of the circle and got down on one knee to ask her to marry him. After Kaitlyn accepted, Noel called out for Thor, who surprised Kaitlyn by running around the corner with a sign that read, “Daddy asked, and Mommy said yes.”

The couple knew they’d have a summer wedding—Noel’s hockey schedule offers only a narrow window between the end of the season and the start of training—but they debated hosting it in the city or in Rhode Island, Noel’s home state. Once they visited Eisenhower House, though, a pastel-yellow 19th-century mansion overlooking Narragansett Bay in Fort Adams State Park, they fell in love. “It was just a very private area,” Kaitlyn says.  “We loved that it was on the water, but also had room to put up a tent as a blank slate that we could really make our own.”

With their venue in place, the couple turned their attention to the look and feel of the celebration. Their inspiration? Classic fairytales. “I grew up watching all of the Disney princess movies and really wanted a little touch of that throughout the wedding,” she says.  That enchanting vision came to life with a blush-and-white color palette with touches of green and gold, shimmering chandeliers, and strings of twinkle lights.

To wrap up a night of dancing with 200 of their closest friends and family, the couple arranged a sparkler send-off with their guests. After making their way through the receiving line, Noel and Kaitlyn stepped aside with two sparklers of their own, which they lit as they looked around, watching their guests board buses headed for the after-party at a hotel downtown. Before hopping on themselves, the newlyweds took a final moment to enjoy what Kaitlyn calls “‘I can’t believe that just happened’ excitement” just as the buses pulled out without the them. “We just totally missed it,” Kaitlyn laughs. Luckily, the pair was able to hitch a ride to the after-party with Kaitlyn’s aunt and pick up some pizza along the way—a storybook ending, after all. 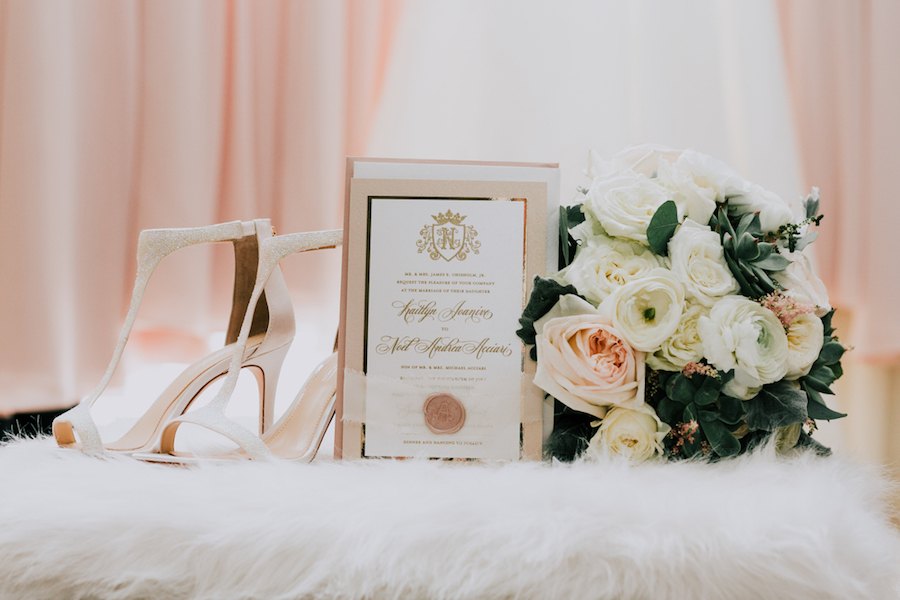 Custom invitations with a gold foil border, a wax seal, and an emblem at the top matched the couple’s elegant, fairy tale theme. 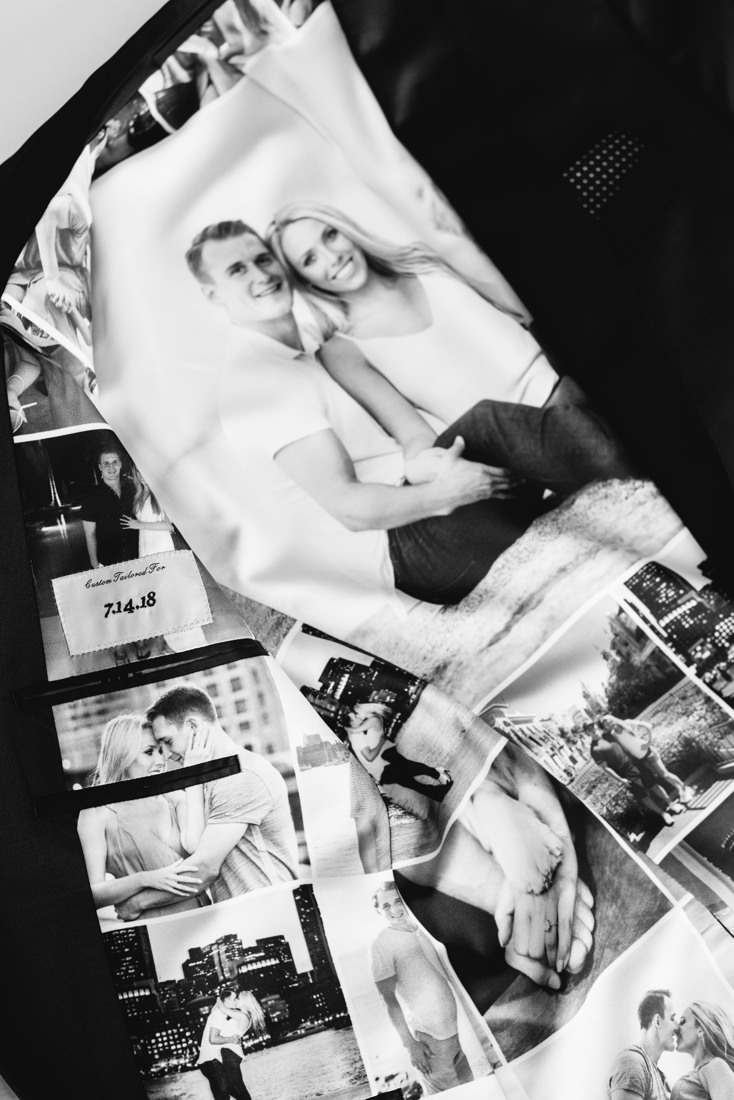 Lynnfield-based menswear designer Christopher Cuozzo dreamed up a tuxedo for Noel with a silk lining featuring photos of the couple. 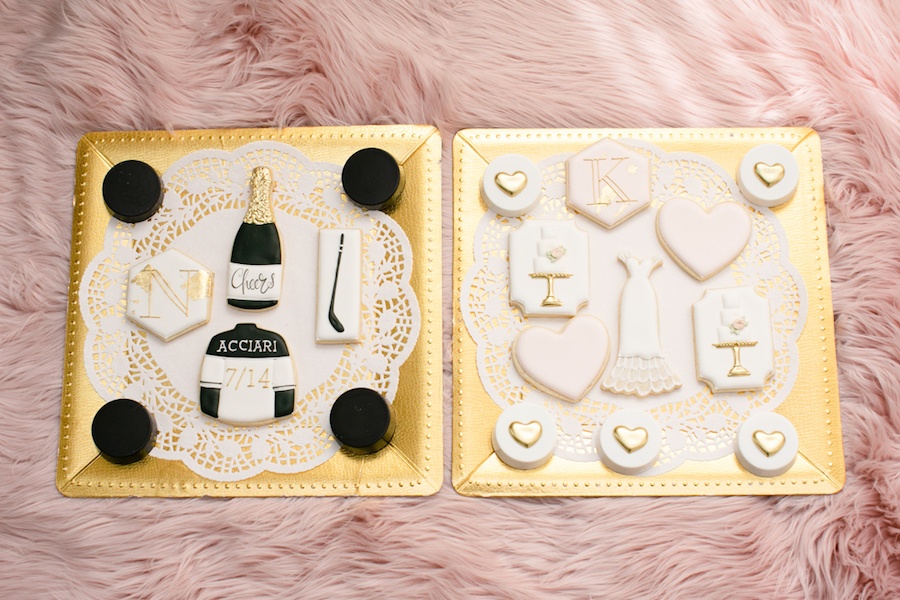 While getting ready, the bridesmaids and groomsmen snacked on cookies—personalized with nods to Noel’s hockey career, as well as the couple’s wedding date and initials—from the Painted Pastry in Beverly. 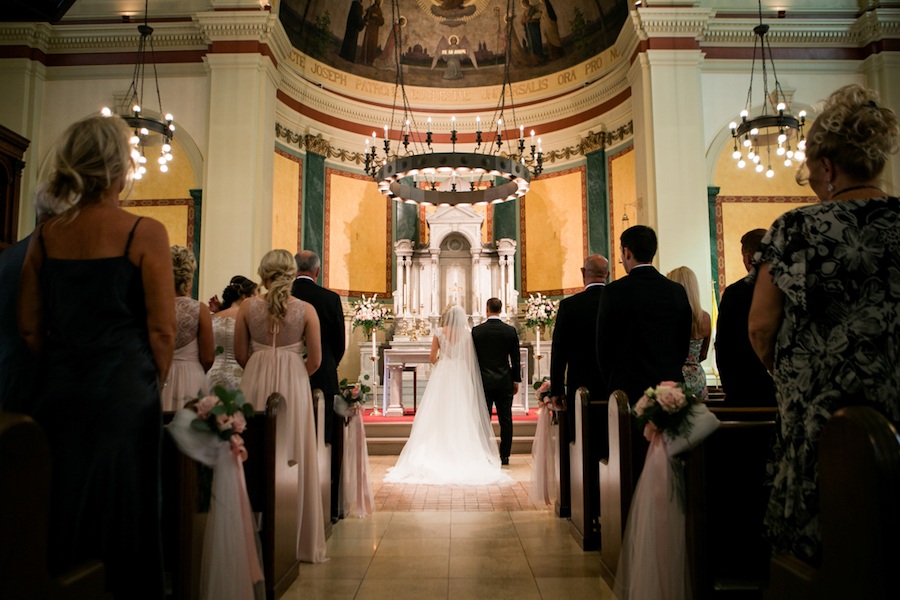 Reverend Brian J. Shanley, the president of Providence College, officiated the couple’s ceremony, which was held at Saint Joseph’s Parish in Newport. 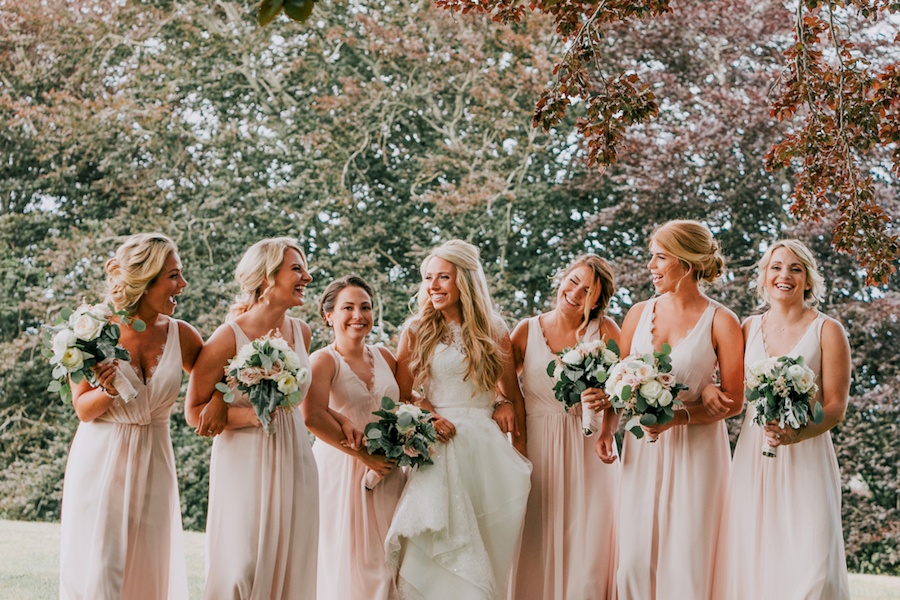 After “trying on more dresses than anyone would recommend,” Kaitlyn says, she eventually found five she loved while visiting Belmont-based Allegria Bridal during an August Jones trunk show. When the bride-to-be couldn’t decide on just one, the designer ended up creating a custom gown that combined elements—including a high neck, beaded lace, and a long train—from all five. 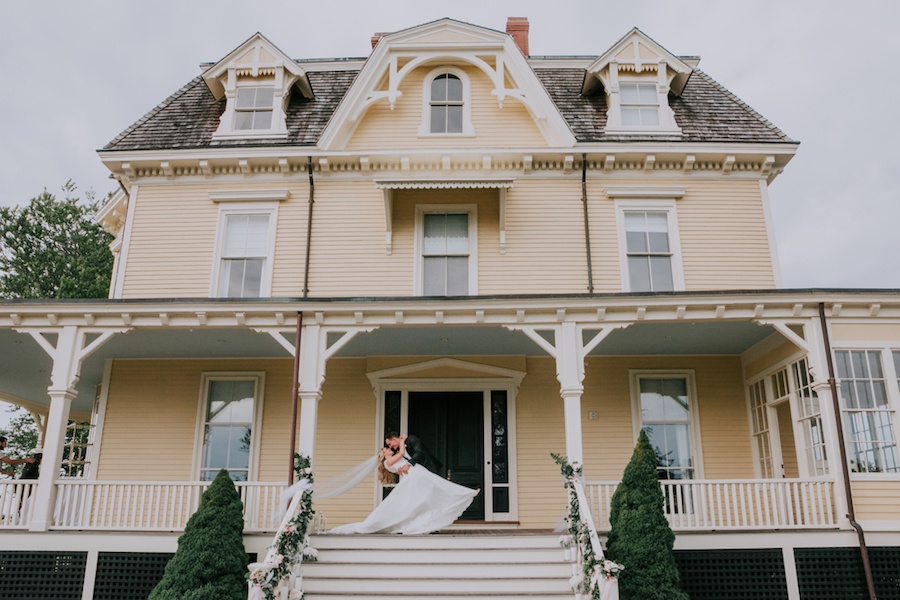 The couple celebrated their nuptials at Eisenhower House, a mansion built in 1873 and later used by President Eisenhower as a “Summer White House.” 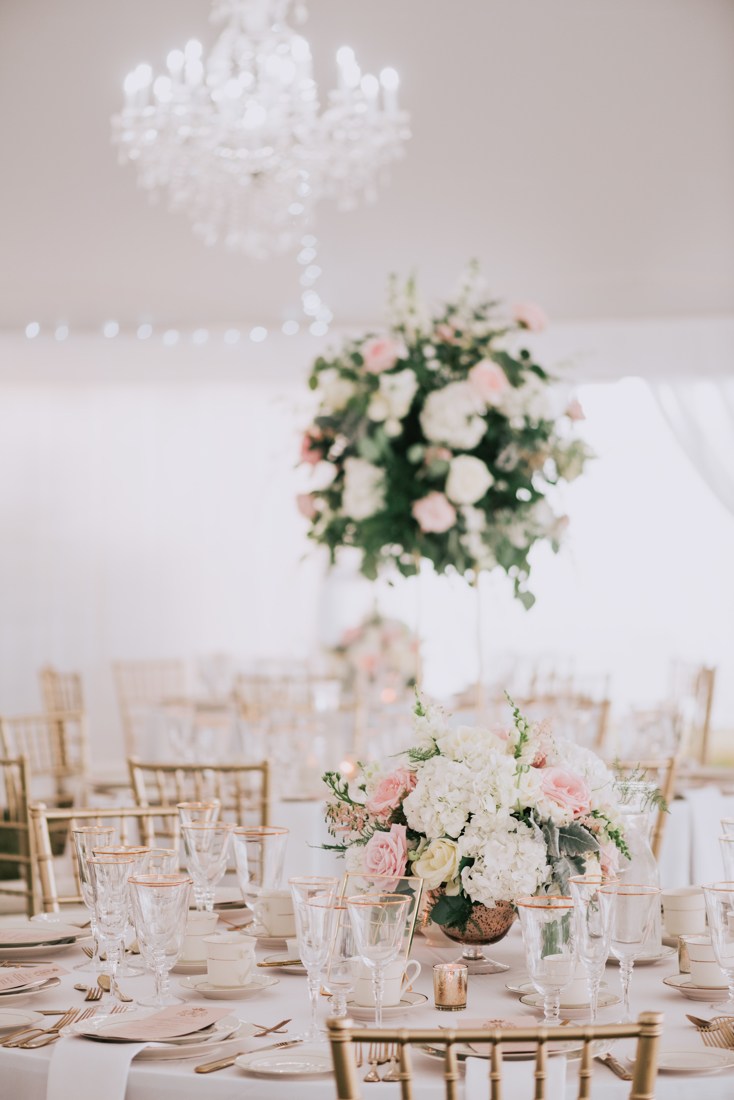 Kaitlyn and Noel wanted their tablescapes to be soft and simple—with white tablecloths and napkins accented by a blush-pink menu and gold silverware and votives. 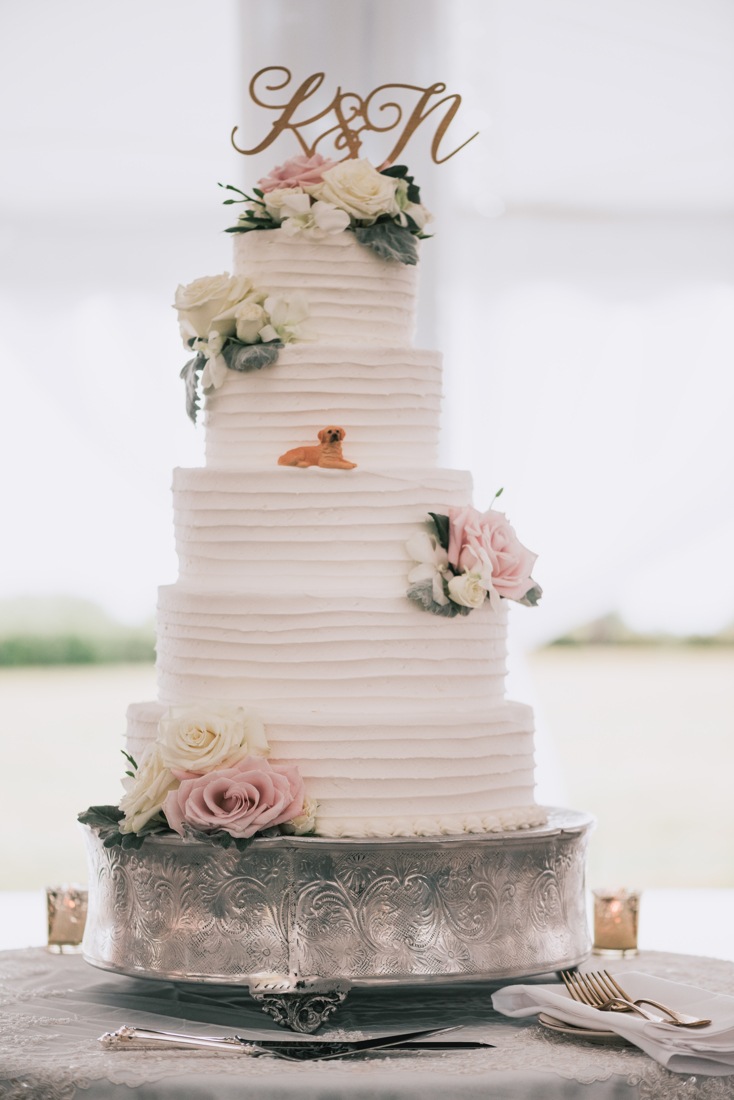 A golden retriever figurine, pulled from a dollhouse that Kaitlyn built with her grandfather as a child, adorned the couple’s five-tier almond cake. “I wanted to include our dog in the wedding as much as possible, so we just put him right on the cake,” she says. 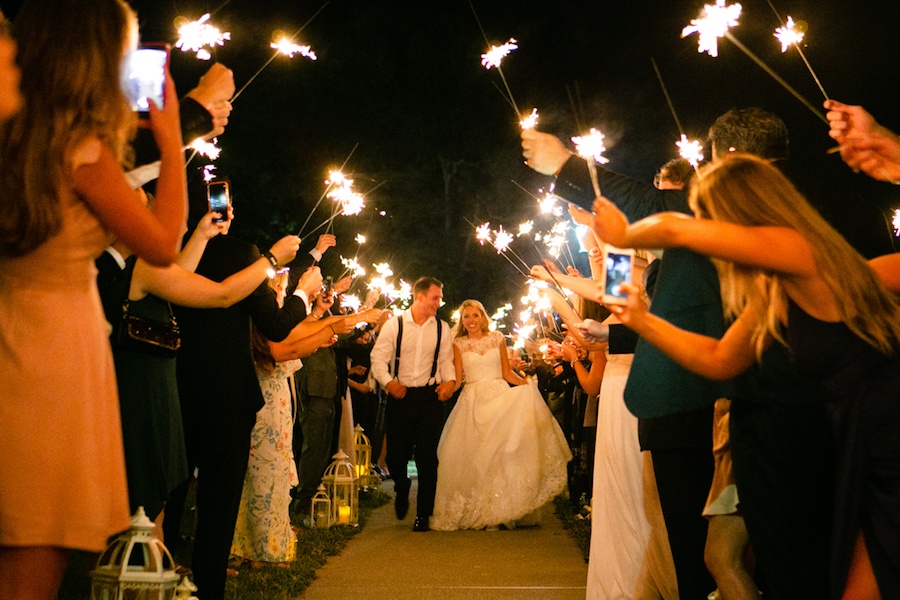 Kaitlyn and Noel timed their formal exit perfectly: Each guest’s sparkler faded out just as the couple passed by. “I just loved the look of it and thought it was such a good way to say goodbye to everyone,” Kaitlyn says of their dazzling send-off.