Get inspired by their seaside summer wedding on Nantucket. 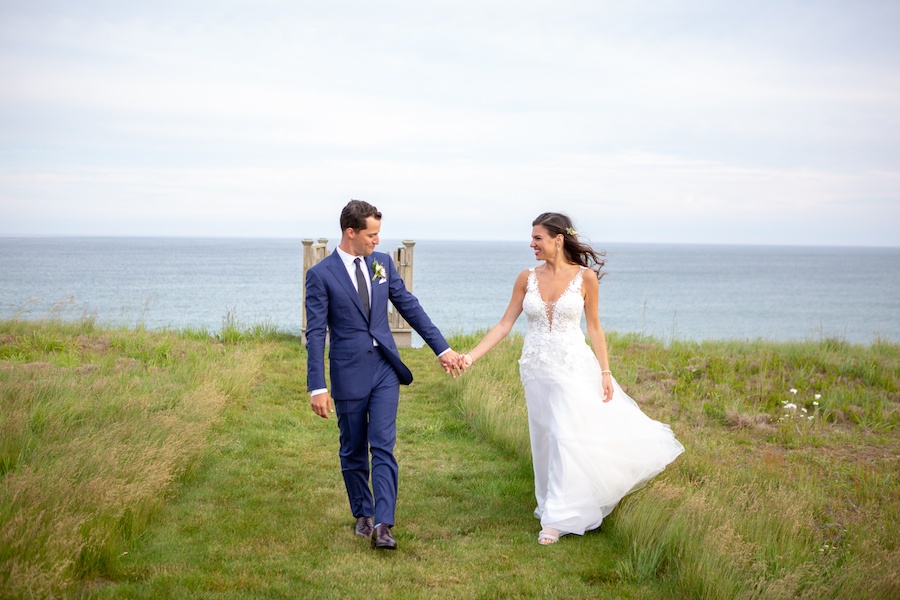 “Ours is a millennial story, I guess,” Lianne Madorsky says, with a laugh. In 2015, Lianne and her now-husband Danny Liebowitz met on the dating app Hinge while they were living in New York City. The pair quickly discovered that they had both attended Franklin and Marshall College in Pennsylvania just one year apart and had mutual friends. Their first date took place two days later at a wine bar in Gramercy Park, where they ended up talking for three hours. “We already had so much in common,” Danny says. “After that night we both kind of knew this wasn’t going to be a casual thing.”

After a couple years of dating, the couple decided to visit Charleston, South Carolina: Lianne was obsessed with the Bravo reality series Southern Charm and Danny, a former professional golfer, wanted to visit the nearby Kiawah Golf Resort. On their two-year anniversary and the last day of their trip, they drove to Kiawah Island and spent the afternoon having drinks on a seaside deck, where Danny eventually proposed.

The couple didn’t want to have a long engagement, so they got the wedding-planning ball rolling quickly. Lianne grew up spending summers on Nantucket, and always knew that she wanted to get married there. While searching for a venue on the island, she and Danny fell in love with a shingle-style private estate, set on the waterfront with a private beach. “It was just this open plot of land, so it was really a blank canvas that we could design from soup to nuts,” Lianne says.

For their ceremony and reception, the couple “didn’t want to take too much away from the beautiful setting,” Lianne says, so they brought their summer wedding to life with simple all-white floral arrangements and a healthy dose of greenery. With grass beneath their feet and blue skies behind them, they tied the knot overlooking the Atlantic in front of 175 guests. “The day was a little crazy because it was so windy,” Lianne says. “But while we were getting married all I could hear was the ocean waves and Danny’s vows, so nothing else really mattered.” 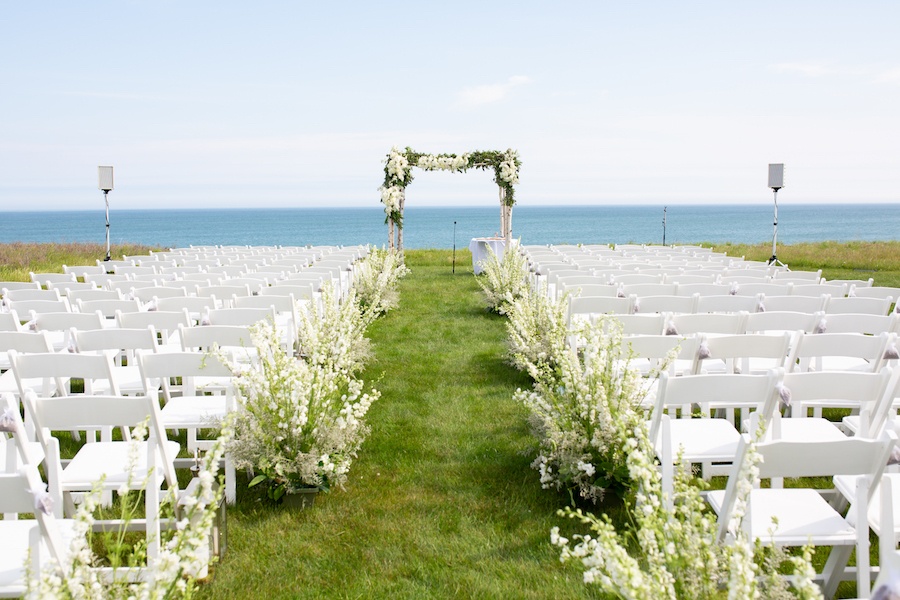 Storms were forecasted ahead of Lianne and Danny’s wedding day, but luckily the rain held out. “I checked every weather app for weeks and it was supposed to be such a bad day,” Lianne says. “I don’t know what happened, but at 3 p.m. the skies just cleared. 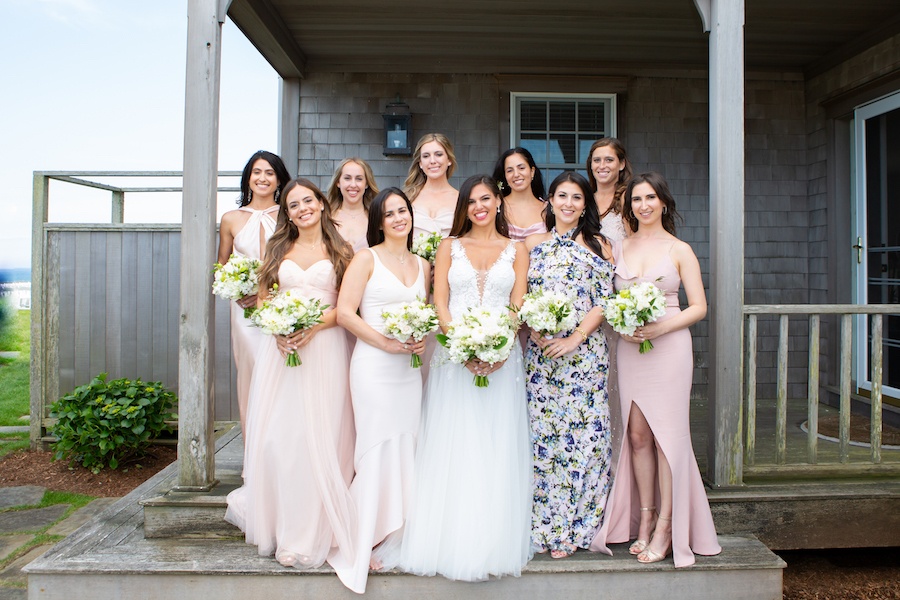 To add a hint of color to their all-white affair, Lianne asked her bridesmaids to don pink dresses. 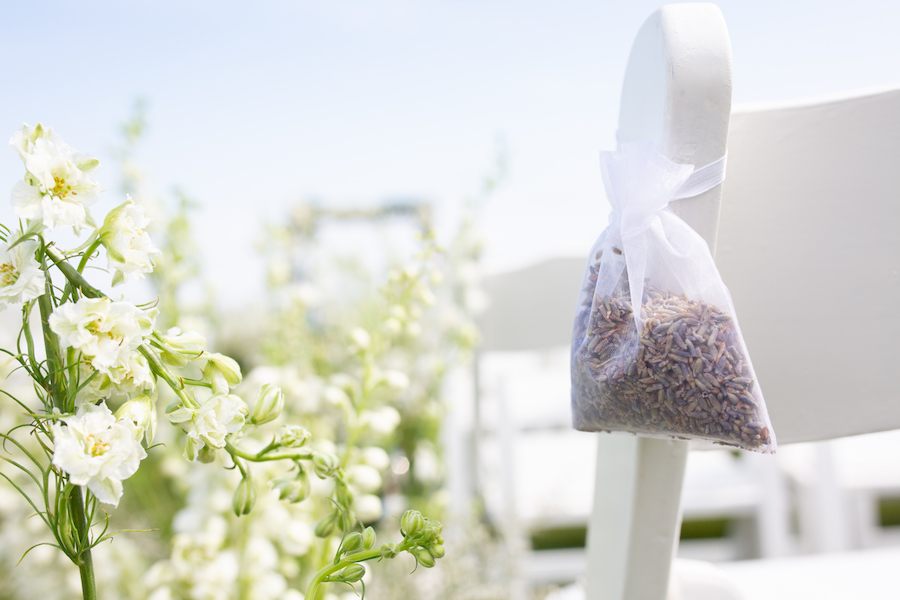 Bags of dried lavender buds hung on chairs for guests to toss at the end of the ceremony. 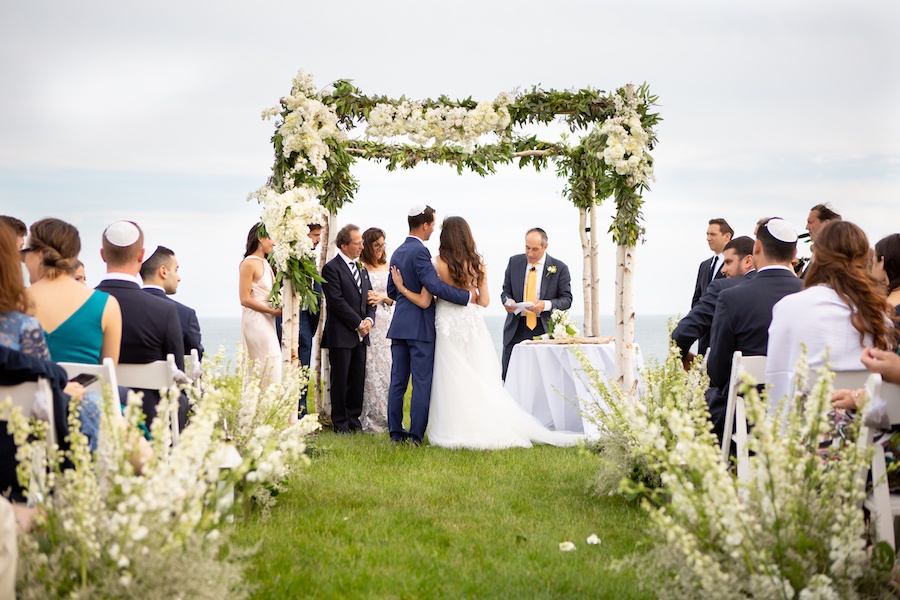 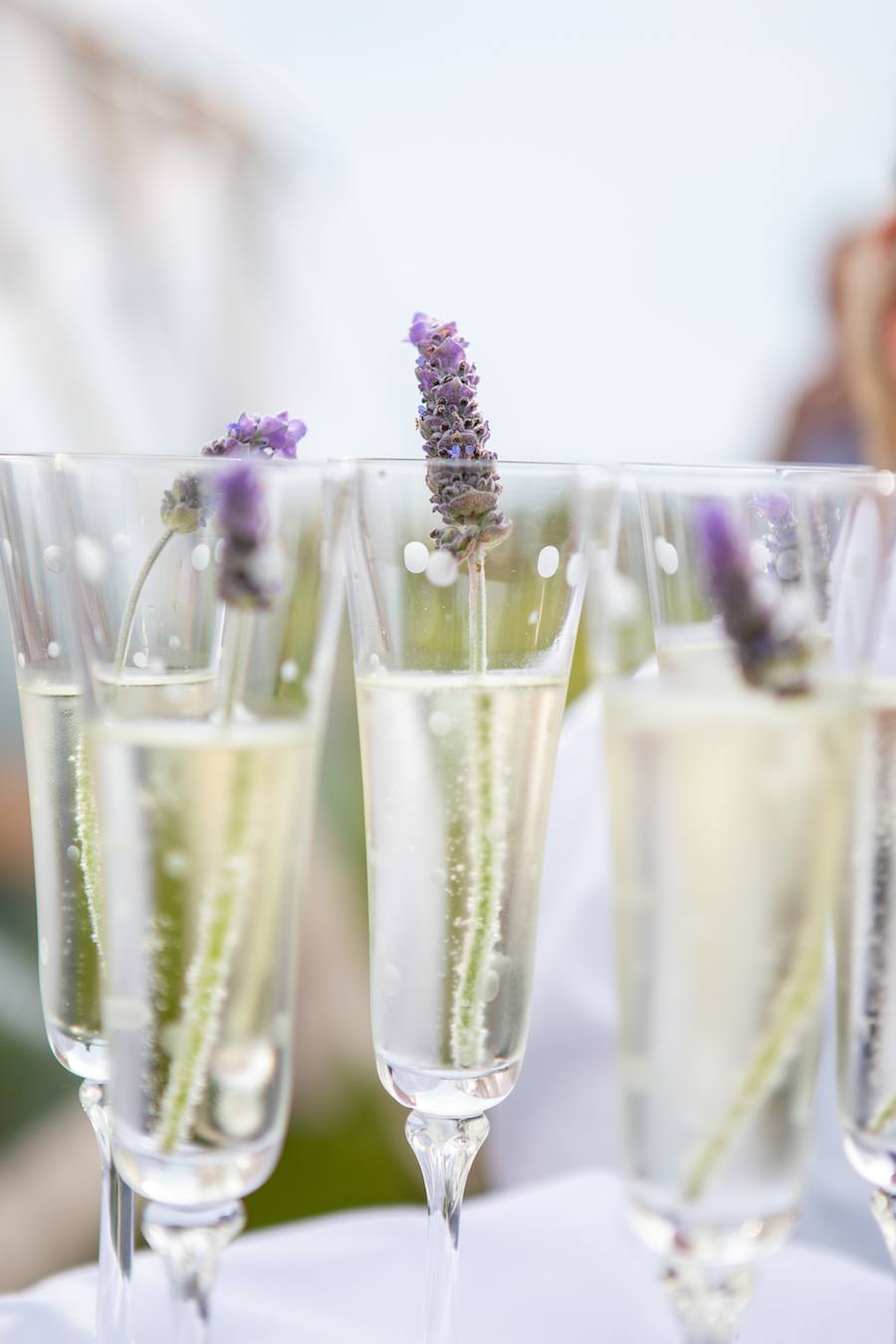 “I really wanted a lot of lavender around,” Lianne says. During cocktail hour the couple served a St. Germain cocktail with a lavender garnish, chosen by the bride, and a pineapple Moscow mule, a favorite of the groom. 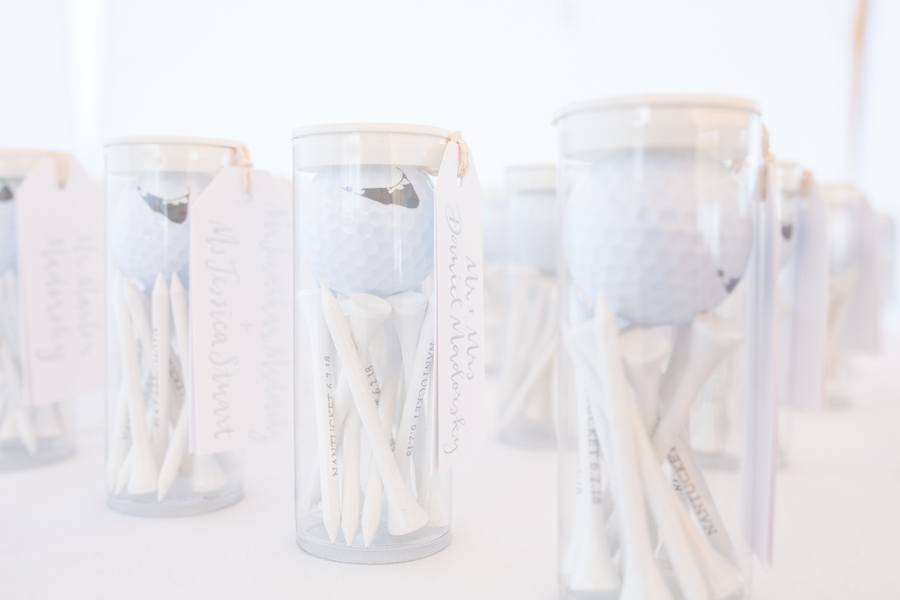 Lianne surprised Danny with golf balls and tees decked out with their wedding date in lieu of traditional paper place cards. “A lot of my family and friends are big golfers, too, so everyone was like ‘Wow this is 1,000 times better than plain, boring cards.” Danny says. “It was really special.” 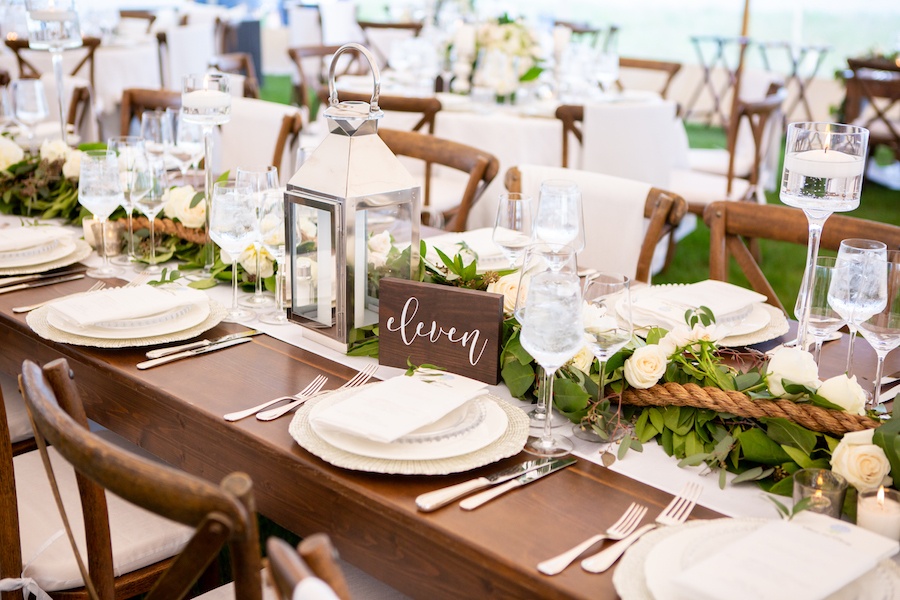 “There were so many random connections [between me and Danny]. We—and all of our friends—went to college together, and I went to high school with Danny’s sister-in-law,” Lianne says. “We wanted to include some long tables so that the reception would feel almost like a reunion.” 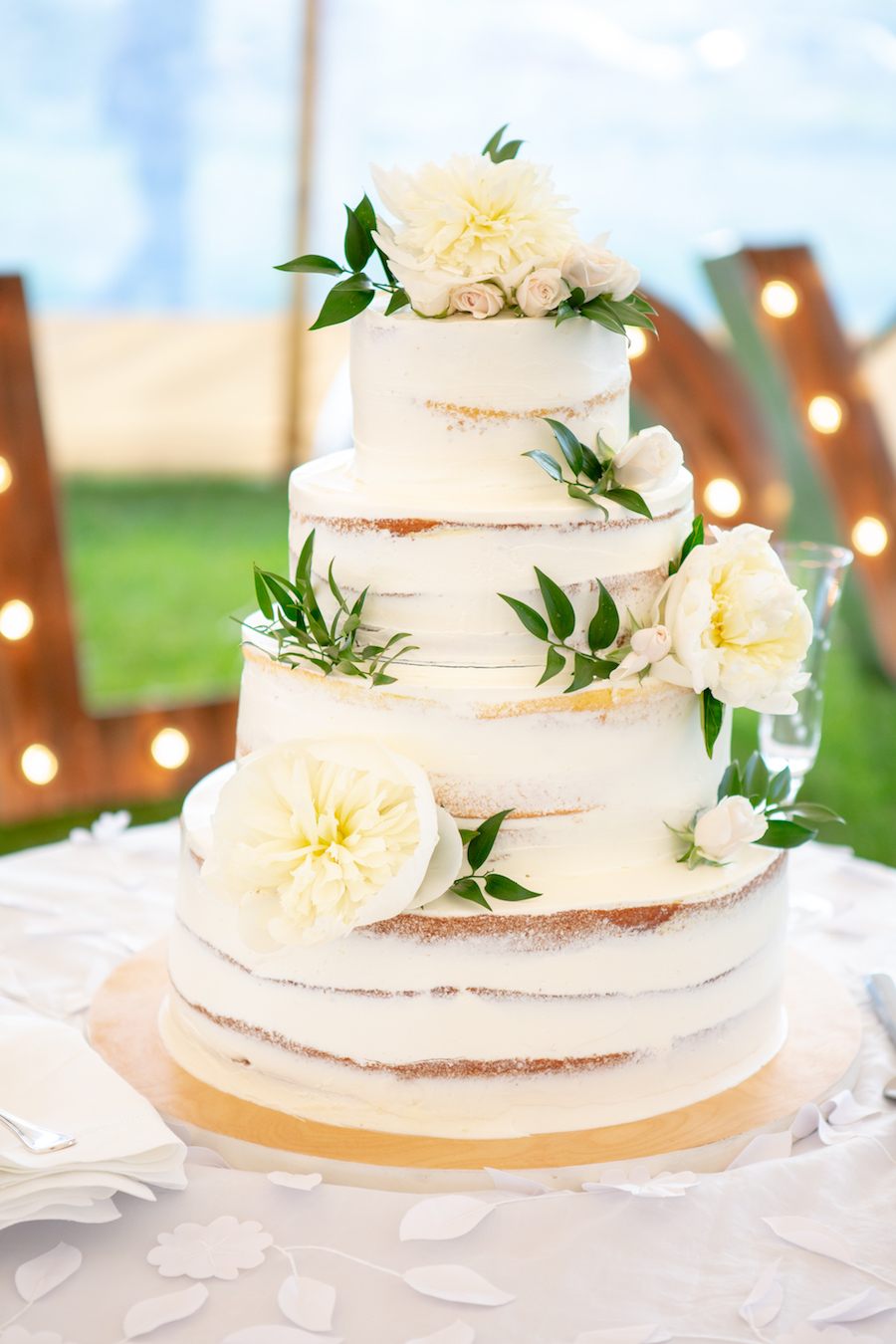 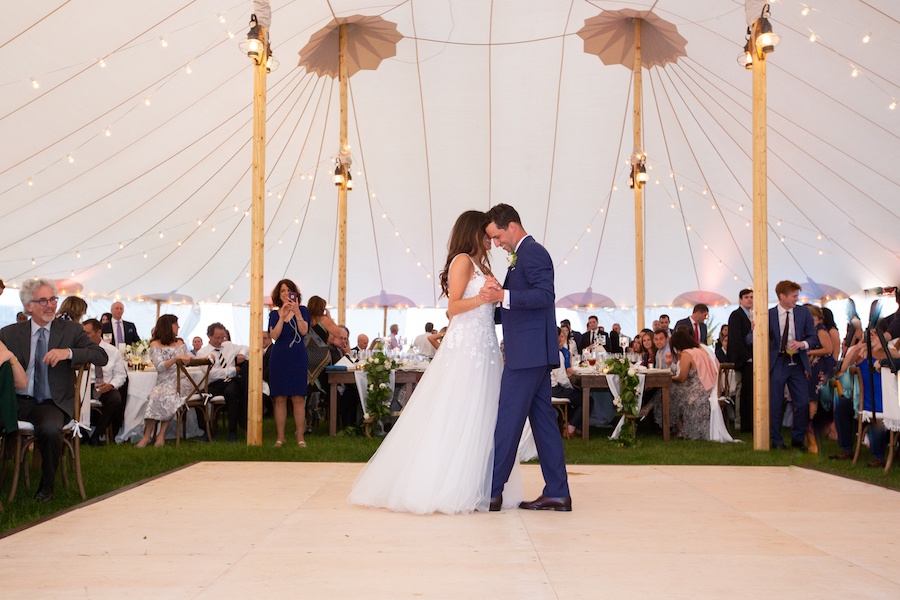 Lianne and Danny had their first dance to “I Must Be in a Good Place Now” by Bobby Charles, a song they’d heard on Netflix’s Master of None and couldn’t stop listening to. “It just became a special song for us,” Lianne says.