From save-the-dates to cocktail menus, the calligraphy master takes stationery to new heights. 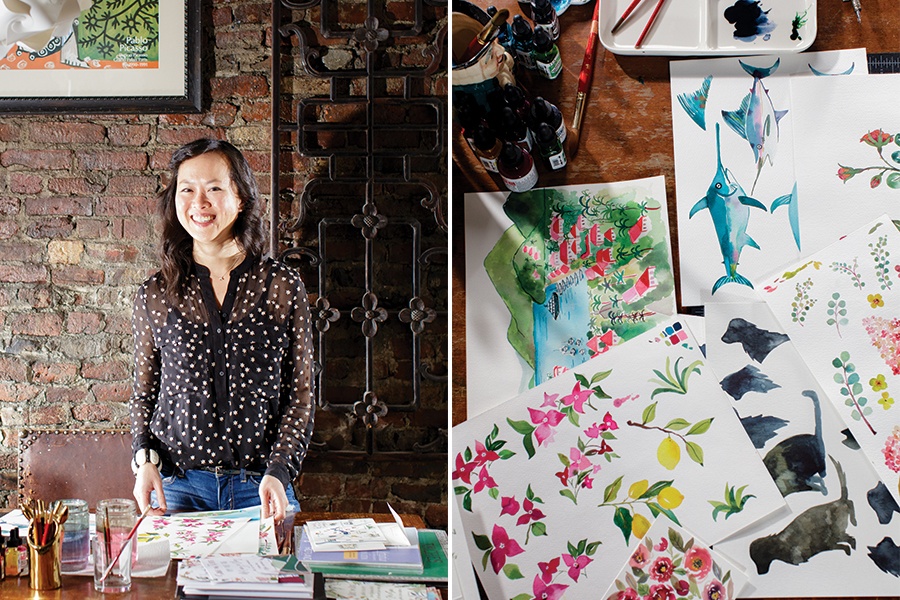 Li Ward may now be one of the area’s go-to calligraphers, but it was photography that initially drew her to the local wedding industry in 2010. As luck would have it, her first client was Parrott Design Studio’s Sarah Parrott. The pair soon began collaborating on small lettering jobs—an ideal opportunity for the self-taught Ward, a longtime calligraphy fan, to hone her skills. “[Sarah] was just starting up her business, too,” she says. “It just naturally happened. I was like, ‘I’m new, you’re new. It’d be fun to collaborate; I’ll write some things, and maybe you can letterpress-print them.’” After several years of working with Parrott, Ward—who’s still an active wedding photographer—felt comfortable enough to expand her calligraphy services in 2015. And now, with hundreds of commissioned works to her name (not to mention a stunning Instagram feed), Ward’s a certified pointed-pen pro.

What are some dos and don’ts for working with a calligrapher?

Do not inquire two months before your wedding. It’s very surprising how often I get that. There’s always something that could take longer. Personally, I always project an extra month to leave time for things such as shipping. Also, consider your budget. Calligraphy is probably a lot more expensive than you think because it’s so labor-intensive. The cost is in the creation, not the quantity of the order. A lot of people don’t quite understand that.

What calligraphy services do you offer?

Pretty much anything you want. But the most common is save-the-dates, main invitations, and personalized menus, plus escort cards, or place cards and menu cards in one. But I mostly do things that need to be illustrated, like cocktail menus.

How do you capture a couple’s vibe in your work?

You can glean from the tone of an email or from their voices what kind of people they are. I do try to have them give me very specific information, such as colors and things that they want and don’t want. They’ll say, “I know I’m getting married by the sea, but I don’t want any shells or water.” I also tell them to keep an open mind. A lot of the concepts I come up with don’t click for me until I’ve already spent hours doing something else. And that’s the exciting part! It can be very stressful and frustrating, kind of like writer’s block. You’re writing and writing and you feel like you’re not getting anywhere, and then suddenly you do. So that’s how I get to the client’s vision—I just try different things. I give them three choices: one that I feel is literally what they want, based on what they’ve told me, and then I extrapolate for the other two.

So how much back-and-forth is involved?

Overall, it’s a long process because we’ll usually start with save-the-dates, which mail around a year out from the wedding. But the consultation itself isn’t terribly long. After we do that first consultation, they send me a mood board or tons of pictures, and basically just throw data at me. After that, we’ll do a couple of rounds of revision, but usually we just refine one of the initial design options. And then we may talk about paper or printing, but I keep that pretty narrow. You’re not paying me for an invitation’s ribbons and the bells and whistles: It’s the actual artwork on it—the customization of what’s on the paper.

What’s your process? Do you do it all by hand or do you use a computer?

It’s by hand, but not by hand. I quickly sketch what I think the general layout of something will look like, but when I paint it, I don’t actually paint a complete piece because if clients want anything changed, I’d have to redo the whole thing and that would just be terrible. I paint a branch or a bird, or I’ll paint just a crest shape, and then scan everything into my computer. So technology does help in that way. For lettering, most of the time it’s me scribbling on paper with a brush or a dip pen. It just depends on the style. Brush lettering tends to be more organic and watercolor-y and wild, whereas the dip pen is a little more refined.

What are some of the things you like to draw?

This is weird because I’m not a “loud” person—if you look inside my closet, everything is blue and black—but I love color on my invites. I know blush and nude tones are very in, but I find it very difficult to mix or reach for those colors. I go for magenta and pinks and bright yellow and blues. I also love drawing flowers, and even buildings, which I didn’t think I did. People are terrible—I can’t draw people. That’s my next frontier. And actually, I love fish. Watercolor, which is what I mostly do, lends itself really well to aquatic scenes. You can do whatever and let the colors bleed. If you did that with a bird, you would mess it up because it would just be a blob. But it’s okay for a fish to be a blob.

What have you gotten a lot of requests for lately?

Maps! I think it’s just one of those things that makes your invitation different; it’s not just “Come to my wedding, RSVP.” It’s something more. It’s a really good way to set the scene and put your personal stamp on it.

THE OLD STANDBY: City skyline
THE ALTERNATIVE Cobblestones
Cobblestones would add a nice textural element to the design. I’d use them as a border around the invitation text or as anchors on each corner of the card.

THE OLD STANDBY:: Anchors
THE ALTERNATIVE Seaweed
Seaweed is full of movement. I would make it very gestural so it looks like the hair of a mermaid or ribbons waving in the wind.

THE OLD STANDBY: Rolling hills
THE ALTERNATIVE Emily Dickinson poems
Dickinson lived in Amherst. I’d design these invitations around the motifs of her poetry, which include nature. “A Bird, Came Down the Walk” could incorporate birds, beetles, or butterflies, for instance.