Get inspired by their picture-perfect elopement at Boston City Hall. 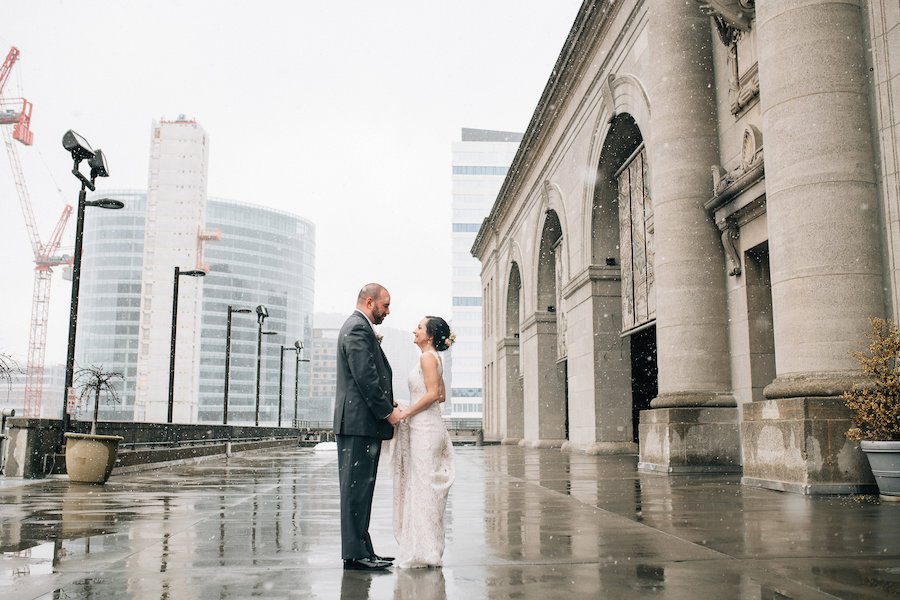 Mary Bohenek and Todd Keller’s romance began in 2012 when they met while both working at a software company in Back Bay. Todd was on a fantasy football team with Mary’s boss, so he often meandered over to her side of the office to chat. One day, when Todd stepped away from his desk, Mary dropped some candy off for him but forgot to leave a note indicating who it was from. Suspecting Mary may have been the source, Todd reached out. “I just decided to ask her on a date,” he says.

Four years into dating, the couple was ready to get engaged. One weekend, they took a trip to the Norman Rockwell Museum in Stockbridge, a spot Mary had always wanted to visit. As they strolled around the museum, Mary noticed that Todd seemed to want to move quickly. “I was like, ‘Maybe this isn’t his thing, or he already saw what he wanted to see.’” Todd then suggested they head outside to take a picture. “I didn’t hear this, but as I was turning my back, Todd was telling the man he gave his phone to to ‘just keep snapping. I’m going to propose.’” After they took the picture, Mary knelt down to pick up her purse. When she looked up Todd was down on one knee. “I immediately threw my hands over my mouth and started cursing a little bit. I told myself I wouldn’t be like this when it happened, but I was that person,” Mary says.

About six months into the wedding planning process, Mary and Todd had put a deposit down on a venue in New Hampshire, chosen their wedding party, and created a guest list, but they noticed that something felt off. “Originally, we wanted a small wedding with just 30 people, but it quickly started ballooning,” Todd recalls. The two realized they weren’t planning the wedding that they’d actually dreamed of having. “All we wanted to do was be married and spend the rest of our lives together, and that’s what it came down to,” Mary says. The pair decided to scrap their elaborate plans and elope at City Hall. They tied the knot in the City Clerk’s office, accompanied by Mary’s childhood best friend, Meghan, and her partner Andrew. “I remember being in the Clerk’s office and thinking,”‘This is exactly what I wanted today to be,’” Mary says. 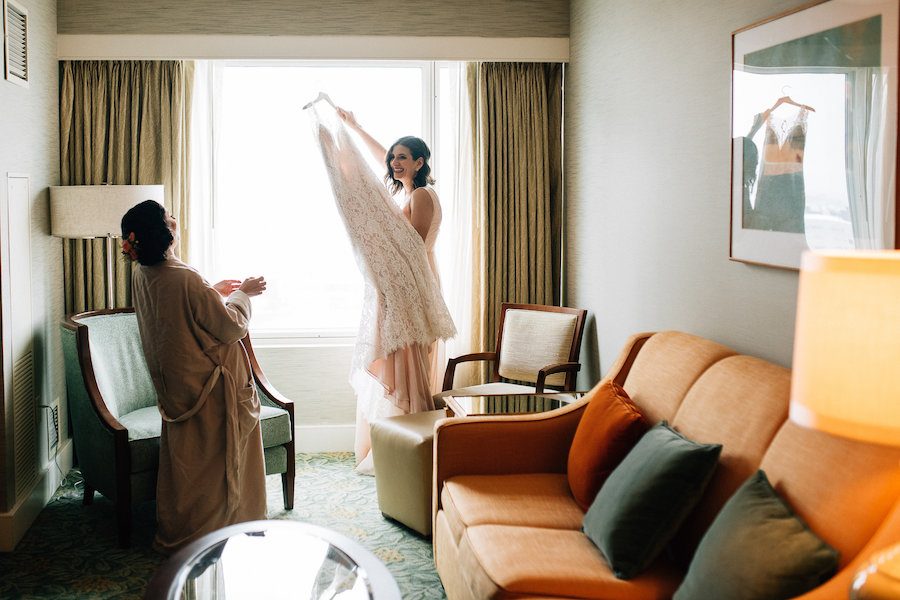 Since Mary is 4 feet and 11 inches tall, she says she didn’t want to be “eaten alive by a big cupcake dress.” Instead she opted for a form-fitting BHLDN gown with straps. 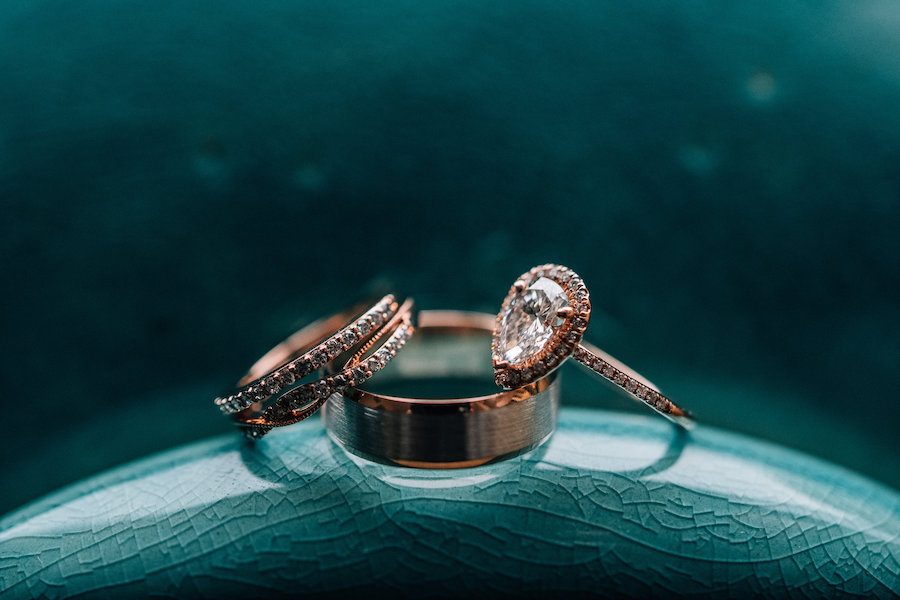 The couple picked out and designed Mary’s pear-shaped engagement ring together at DeScenza Diamonds in Hingham a few months before Todd proposed. “He wanted me to have a ring that I wanted,” Mary says. 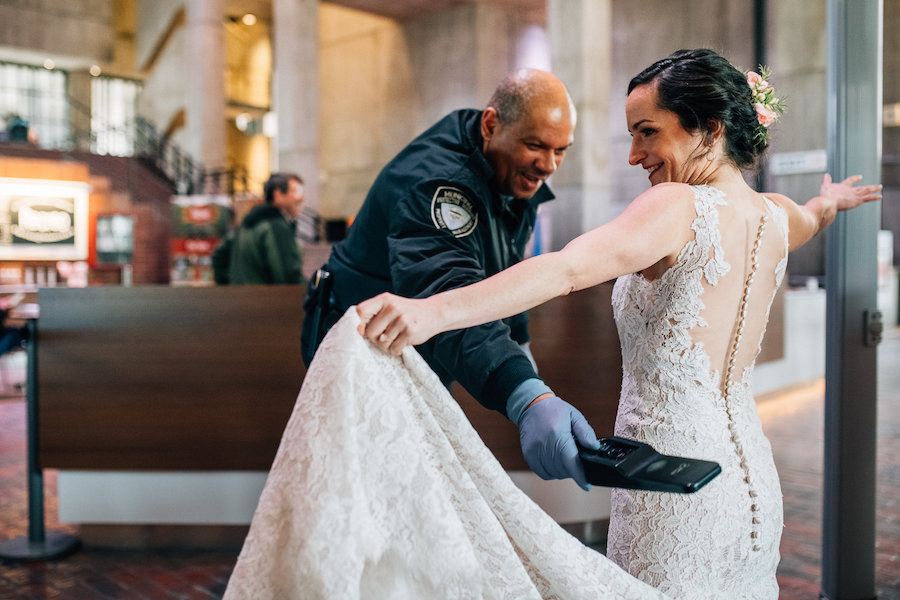 “Going through the metal detector at City Hall was a funny moment that kind of symbolizes how quirky we are. We wanted to have those outtake moments so that we’d later look at our wedding photos and just see us,” the bride says. 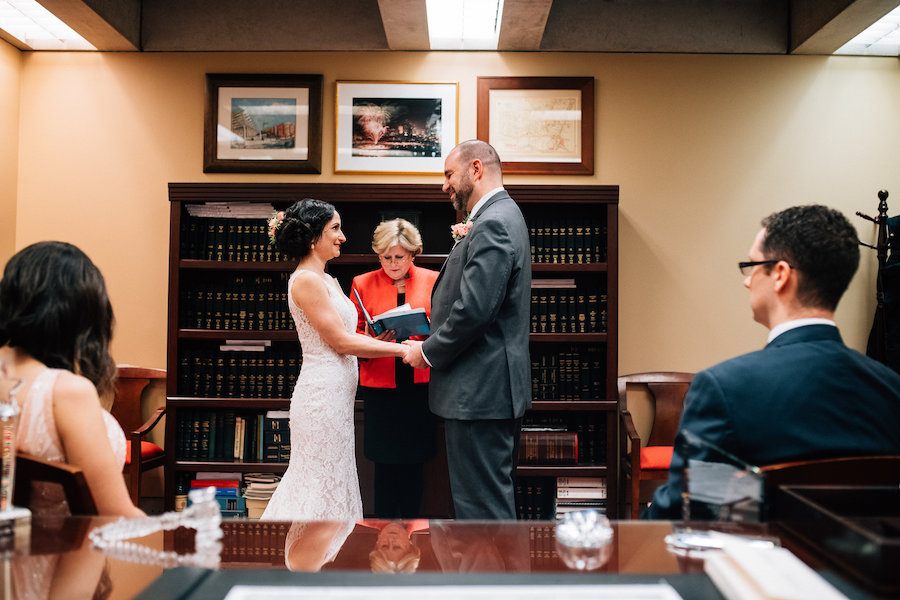 City Clerk Maureen Feeney married Mary and Todd in her office. “She made sure that my train was all fluffed out and made everything feel very personal,” Mary says. “Even though we had just met her, it felt like she was a well-spoken, favorite aunt.” 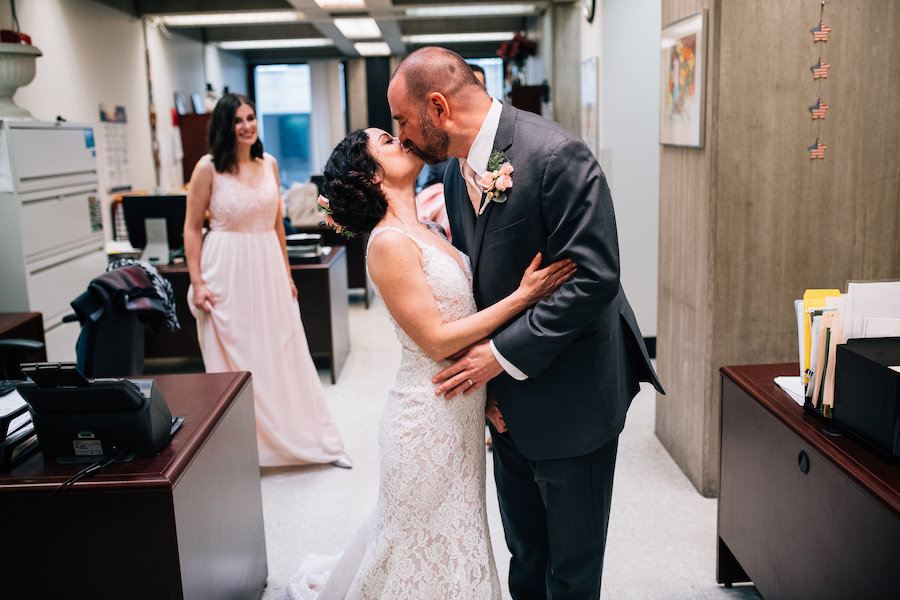 “It doesn’t feel like we missed out on anything in terms of not having a formal ceremony,” Mary says of her wedding day. 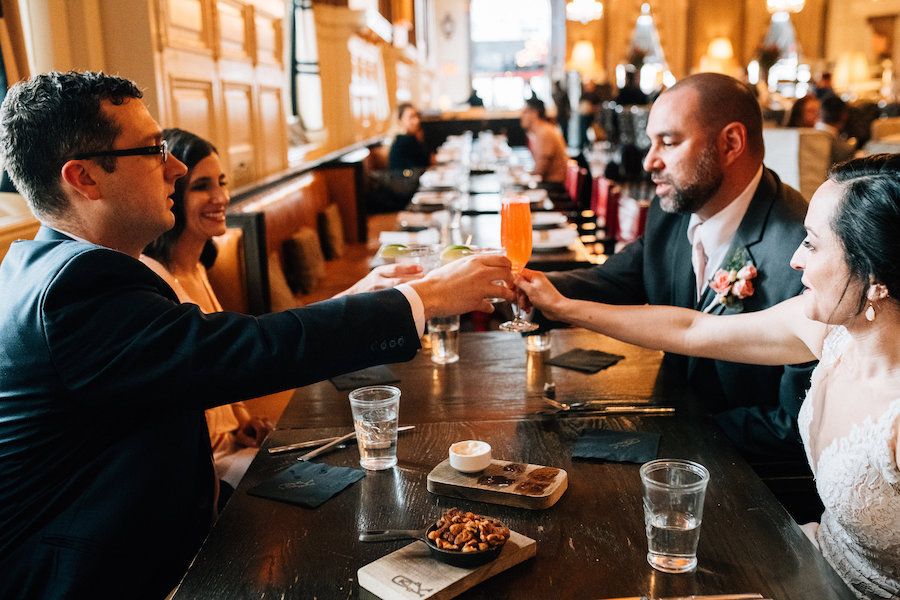 The group posed for photos in Back Bay after their ceremony and then headed to the Oak Long Bar + Kitchen for drinks and appetizers. “We all chatted and laughed about what had just happened,” Todd says. 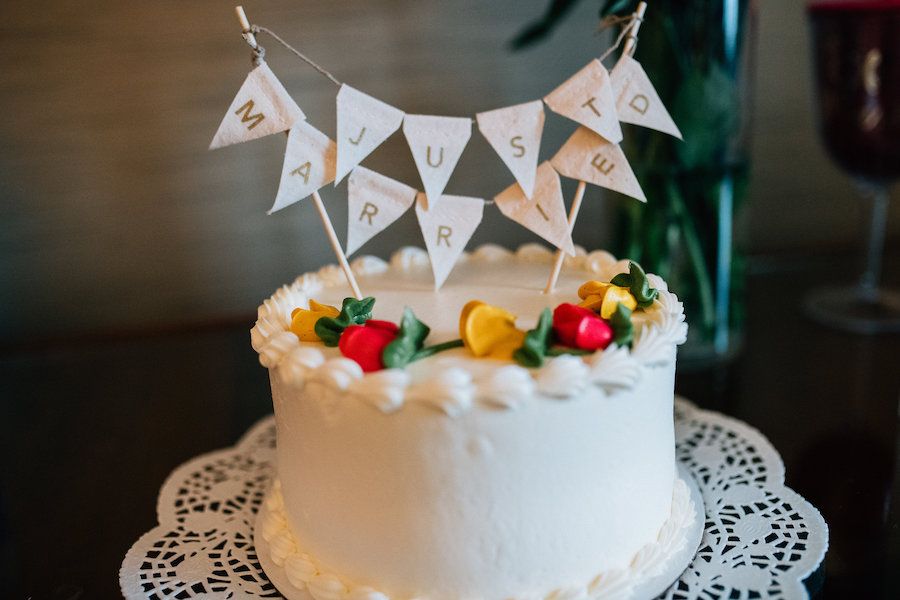 Meghan surprised the couple with a vanilla cake with lemon custard from Cakes for Occasions, which Mary and Todd ended up eating the day after their wedding at home in their apartment.