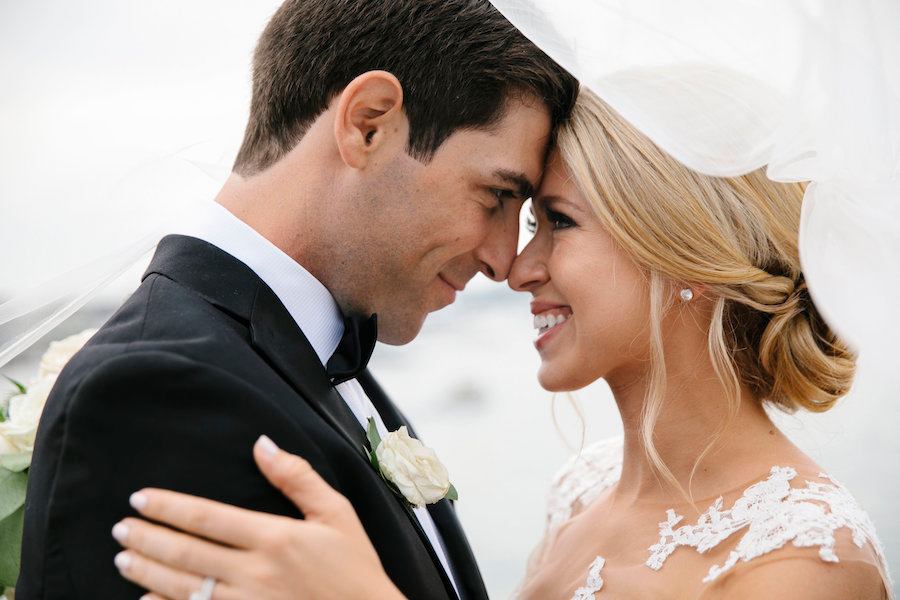 Carlie O’Connor and Danny Pardini met in 2013, when they were paired up for a role-playing activity in a sales-training class at work. “Danny was trying to chat and get to know me, and I was like, ‘This is the first day of class, I don’t want the teacher to think I’m just chatting. We’re supposed to follow the activity!’” Carlie recalls. Danny says he knew on that day that she was the one.

About four years into dating, Danny surprised Carlie with a two-week trip to Italy. On their second night in Tuscany, Danny suggested they enjoy some champagne on the terrace of their resort before heading to dinner. As Danny lead her to the balcony overlooking picturesque rolling hills, Carlie spotted rose petals scattered along the ground. “My heart started beating so fast,” Carlie recalls. Then, Danny got down on one knee. “It was the most magical, surreal moment,” Carlie says.

Once the couple returned from their trip, it was time to start planning. Carlie grew up in Hingham and had dreamed of having a Boston wedding. The couple found the undeniably Boston feel they were looking for at the State Room, an event space near Government Center that features skyline and harbor views. “You just can’t beat that wraparound view of the city,” Carlie says. To ensure that the view remained the focal point, Carlie and Danny say they “kept things elegant and classic,” with simple florals and white tablecloths.

The true highlight of the day, though? Getting to spend it with 250 of their closest friends and family. During their reception, Carlie and Danny snuck away for a moment to head up to the mezzanine, which overlooks the dance floor. “We gazed down at everybody, and then we just looked at each other like, ‘All these people are here for us. Wow,” Carlie says. 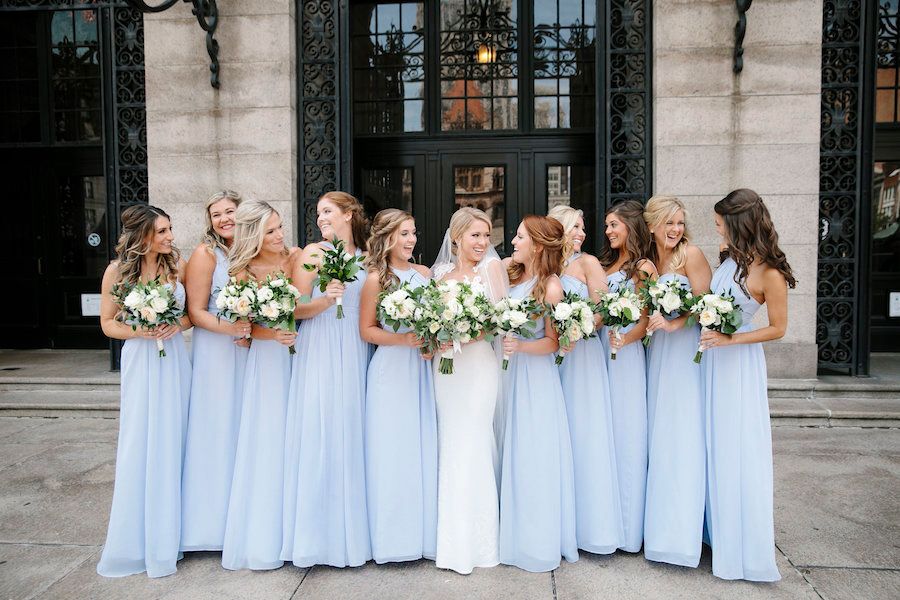 When she set out to find her wedding gown, Carlie expected it to be “a process.” In the end though, she found her Pronovias dress at the first shop she visited: Musette. “When I tried it on, I knew it was the one. I came out and everyone was crying,” she recalls. 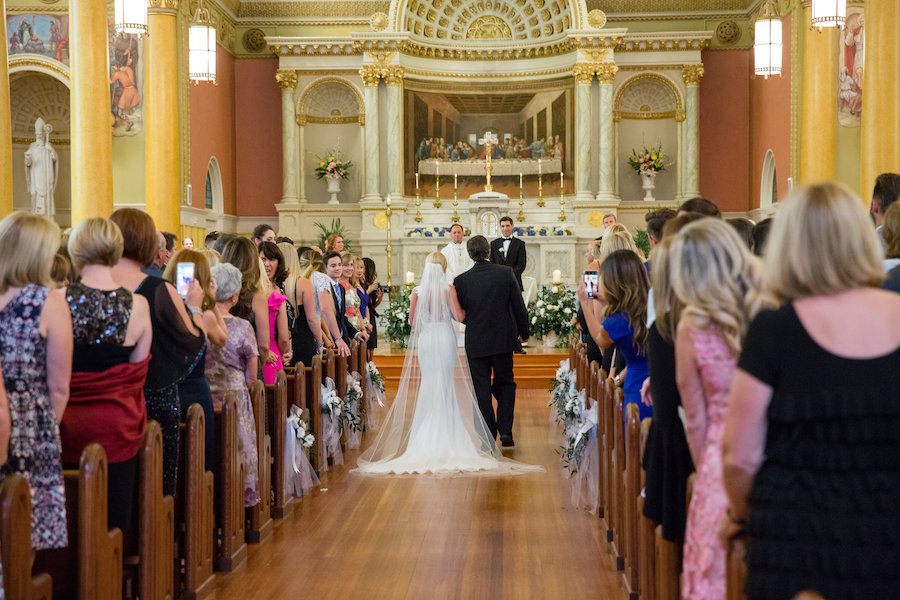 The couple decided not to do a first look because they wanted the first time they saw each other to be when Carlie walked down the aisle with her dad, Austin. “It was a moment I’d dreamed of since I was little, and for my dad it was really emotional giving his eldest daughter away,” the bride says. 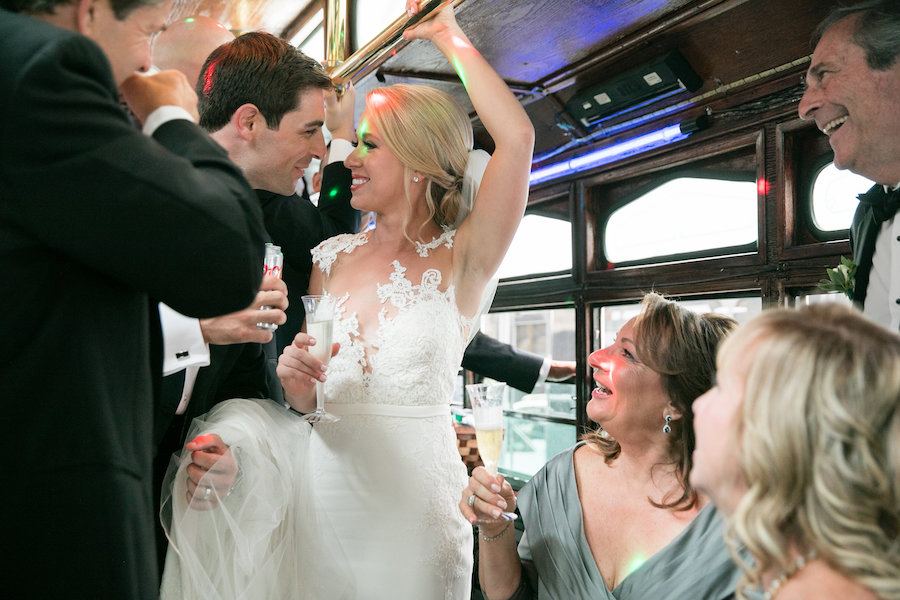 After the ceremony, the couple, their parents, and their wedding party started the celebration right away aboard a trolley en route to their reception. “There was a Red Sox game that got out as we were leaving the church so there was traffic,”Carlie says. “But instead of being stressful, it was so much fun.” 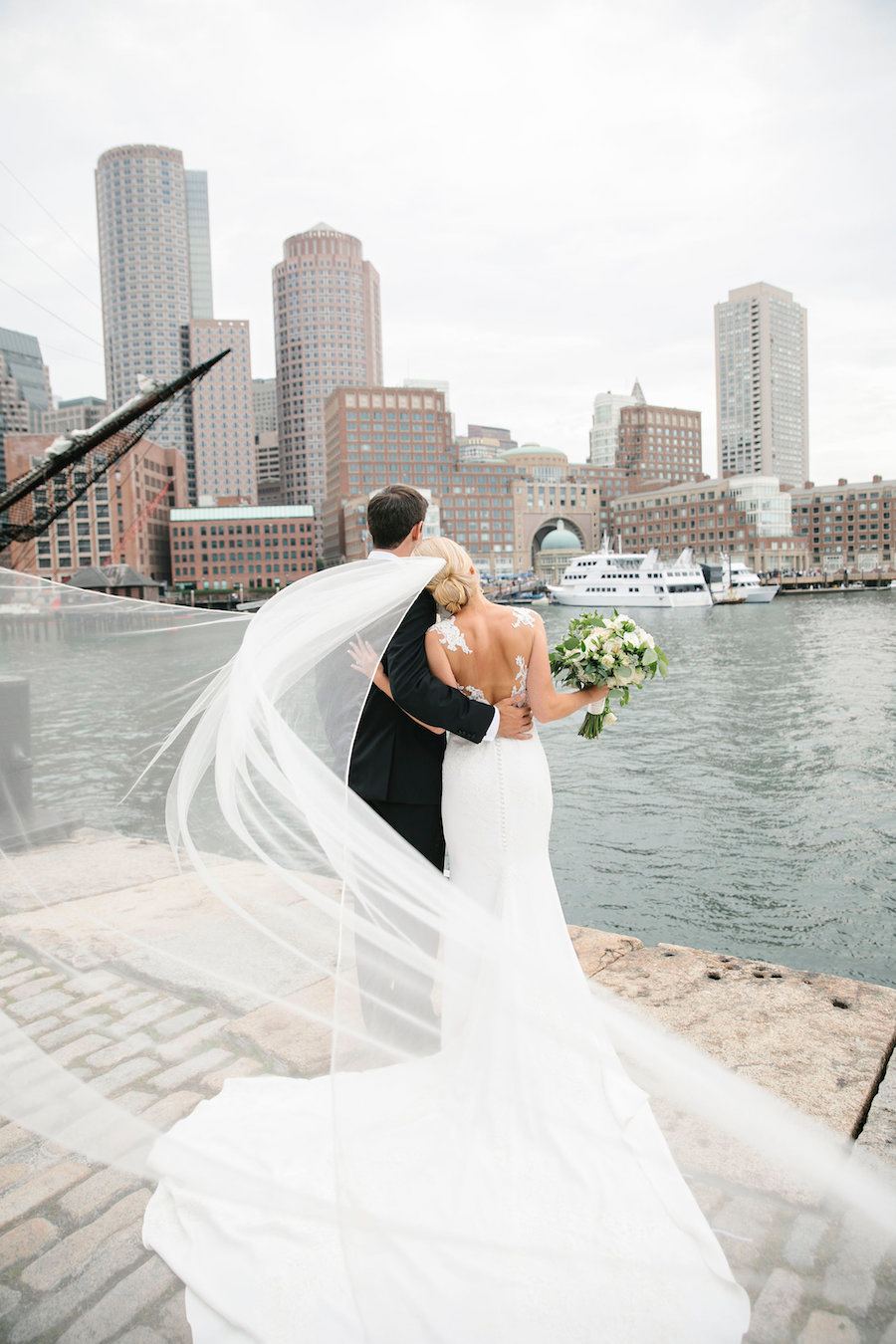 Carlie and Danny took photos on the Harborwalk, where Carlie’s full-length veil floated in the breeze. “I knew I wanted a full-length veil, and when I put it on with my dress in the shop, I got so emotional about it,” Carlie says. “It really made me feel like a bride.” 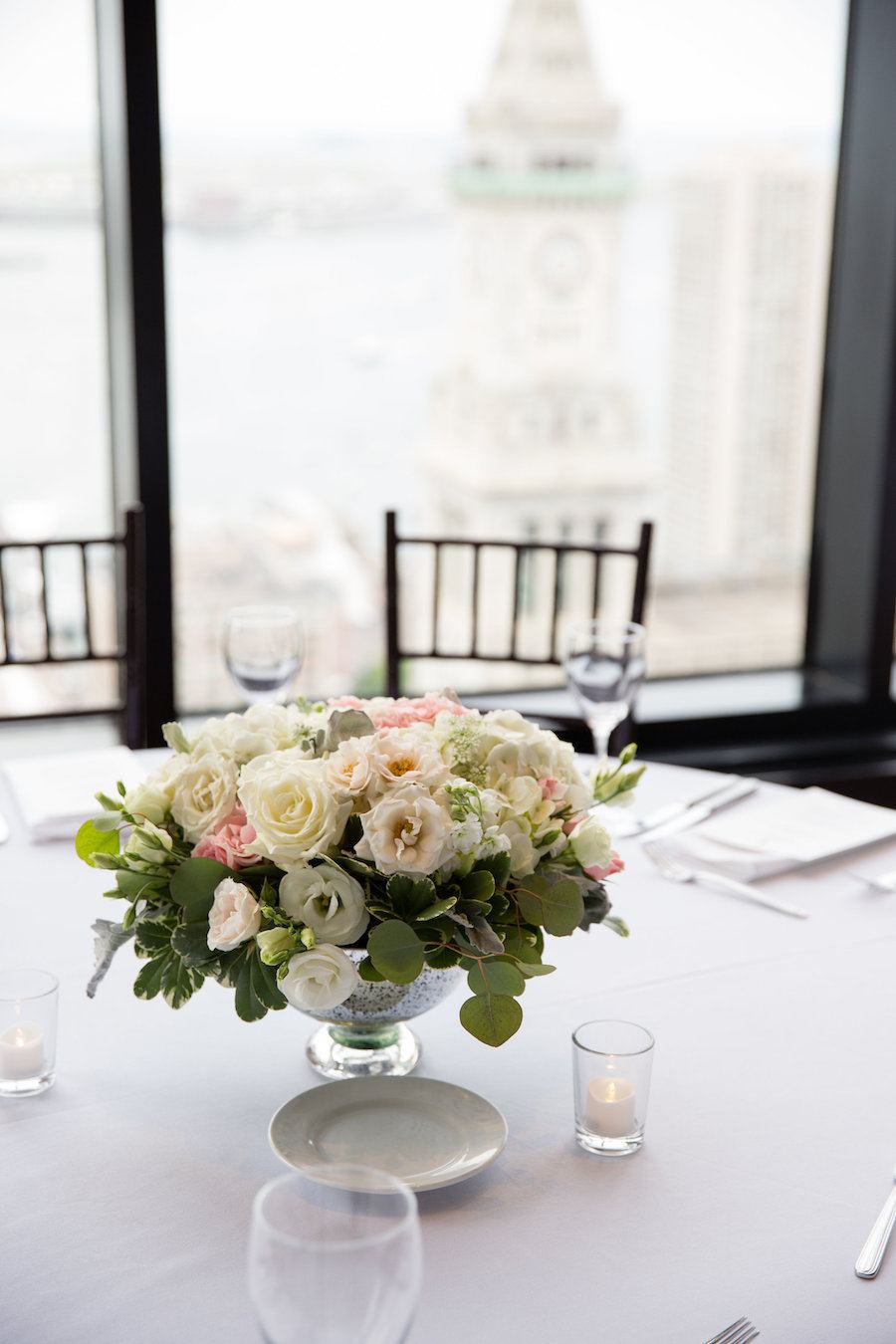 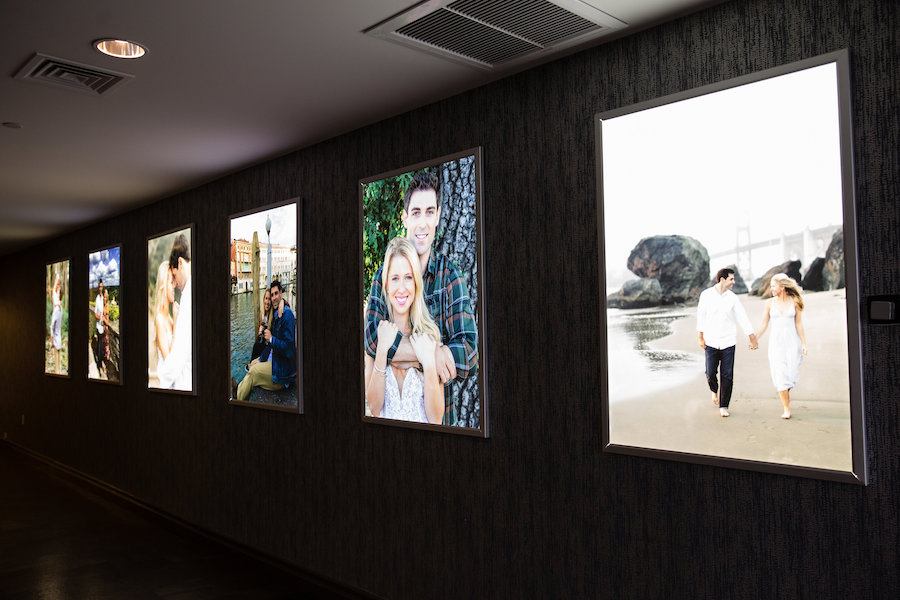 The couple filled the venue’s gallery wall with images from their trip to Italy, including the proposal, as well as their engagement shoot in San Francisco. 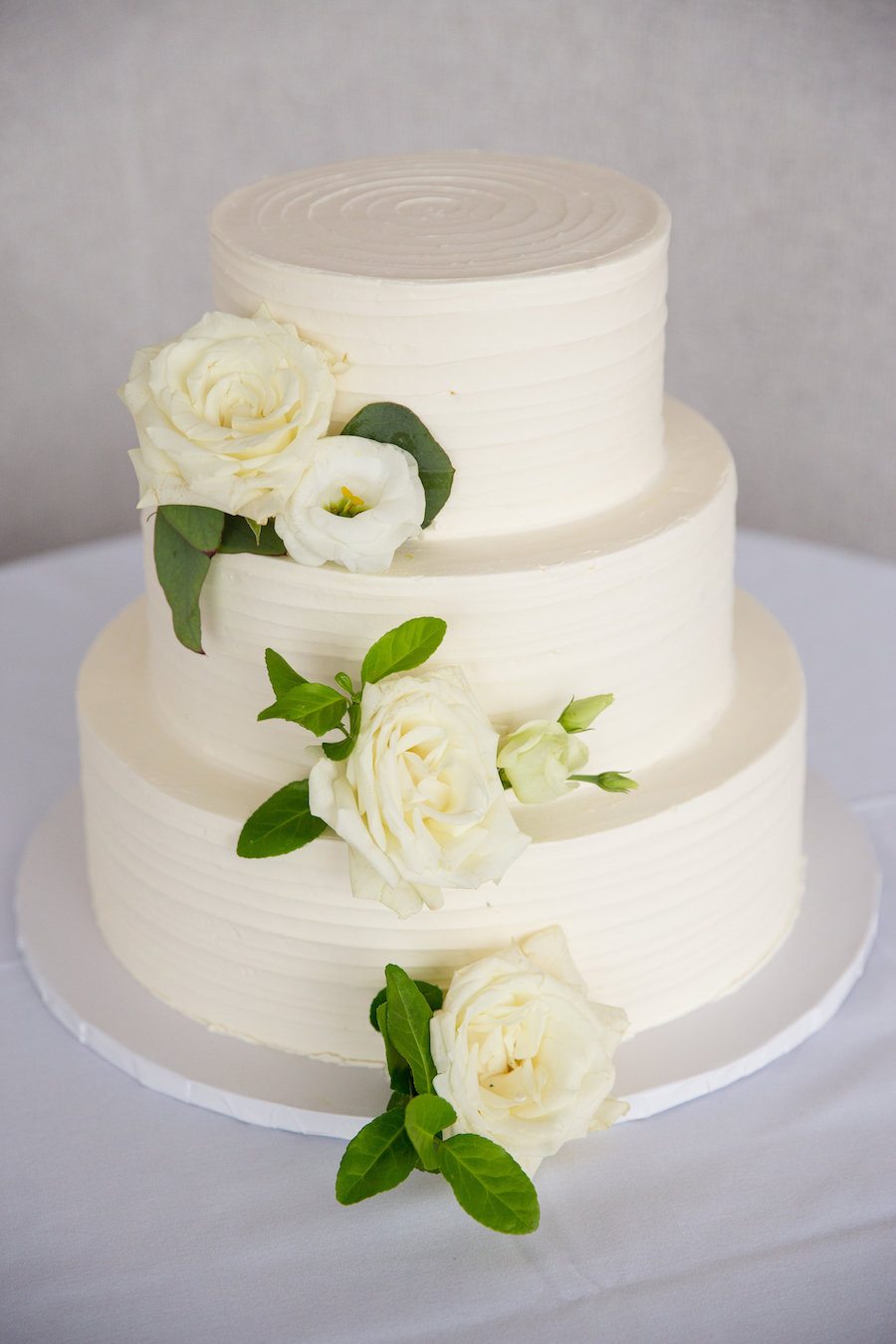 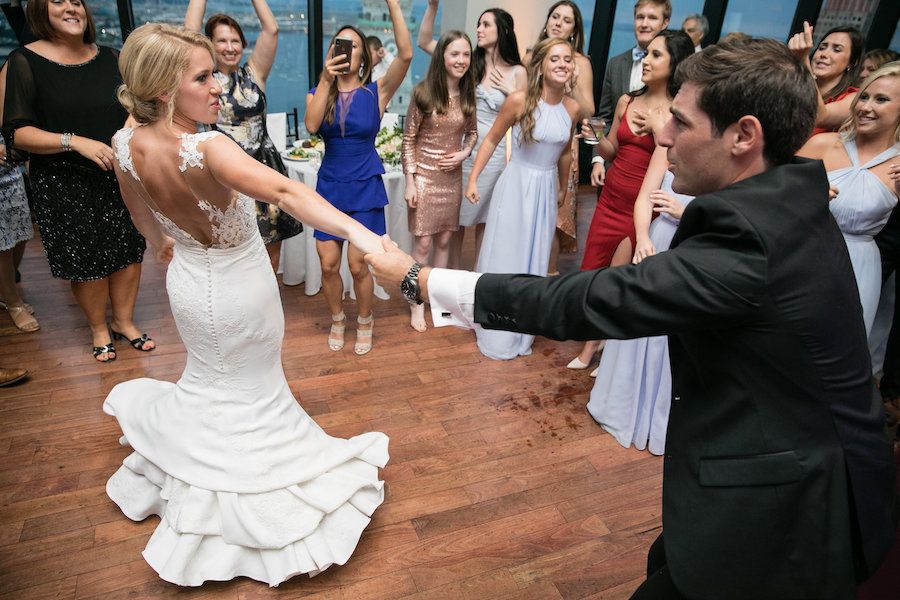 Carlie and Danny chose Marc Cohn’s “True Companion” for their first dance. Carlie heard the song when she was a child and decided then that she would dance to it at her wedding. “It was pretty surreal after listening to it for so many years,” the bride says.