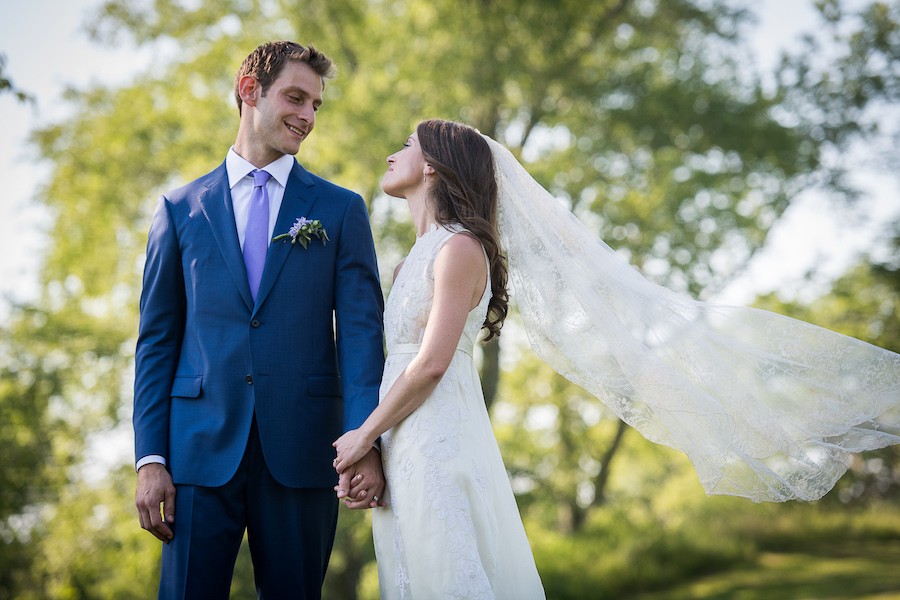 Some love stories take longer to write than others. So it was for Miriam Goodman and Daniel Green, who met on Tinder in 2014. Although the pair immediately hit it off, Miriam broke things off after a few months of dating. “I wasn’t ready to be in a long-term relationship,” she says. Though they’d never actually met Daniel, Miriam’s family members were big fans and urged them to get back together. “Everybody loved him,” Miriam says. A few months later, Daniel reached out with a text message on her birthday. Soon after, they decided to meet up again and were inseparable from then on.

After dating for nearly a year and a half, Daniel asked Miriam’s parents for their permission to pop the question. Their answer was, of course, yes, and their families began plotting the proposal. On Christmas Eve, the couple and Miriam’s family were at their lake house in the Berkshires, which had become a special place for the pair. It was there that, a year earlier, Daniel had first told Miriam he loved her while they sat by the lake during Fourth of July fireworks. “I wanted to recreate that,” Daniel says, so he took her down to the lake at sunset. They sat by the water and talked about their relationship, and then, Daniel got down on one knee. “I was very surprised,” Miriam recalls. Then, just like on the Fourth of July, came the fireworks.

When the couple began planning their wedding, deciding upon the “where” was simple. Though they’re both from New York City, they felt right at home in the Berkshires. So when they visited Gedney Farm, Miriam says, they “knew right away” that it would be their venue. Miriam, Daniel, and their closest friends and family stayed onsite for the entire wedding weekend. “We really wanted it to be relaxed and be about our families, too,” Miriam says. To create a laid-back look for their big day, the couple tasked their vendors with bringing to life a casual, rustic-chic celebration with colorful, locally-foraged flowers and natural wood elements. “We wanted it to be like a classy hangout in a field of wildflowers,” Miriam says. The end result? A dreamy outdoor ceremony under an enormous oak tree, followed by a stylish barn-house bash with all of their loved ones. “It felt like such a huge high the whole day, and at the end of the night it was like we had made 50 lifetime memories in just a few hours,” Daniel says. 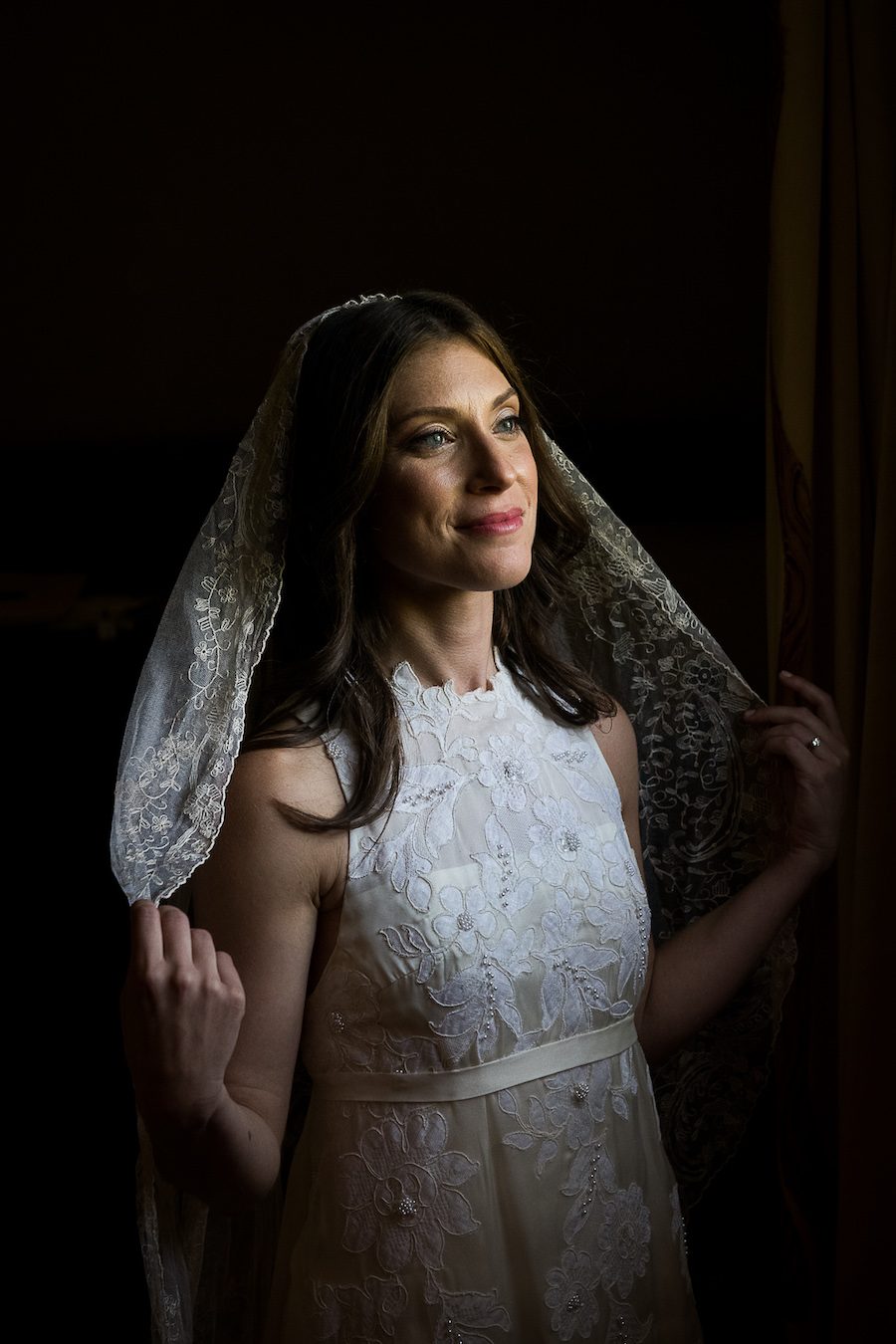 Miriam wore her mother Rhonna’s 50-year-old wedding dress, altered by a seamstress to remove its cap sleeves and bow. “It was the most comfortable dress ever,” the bride says. 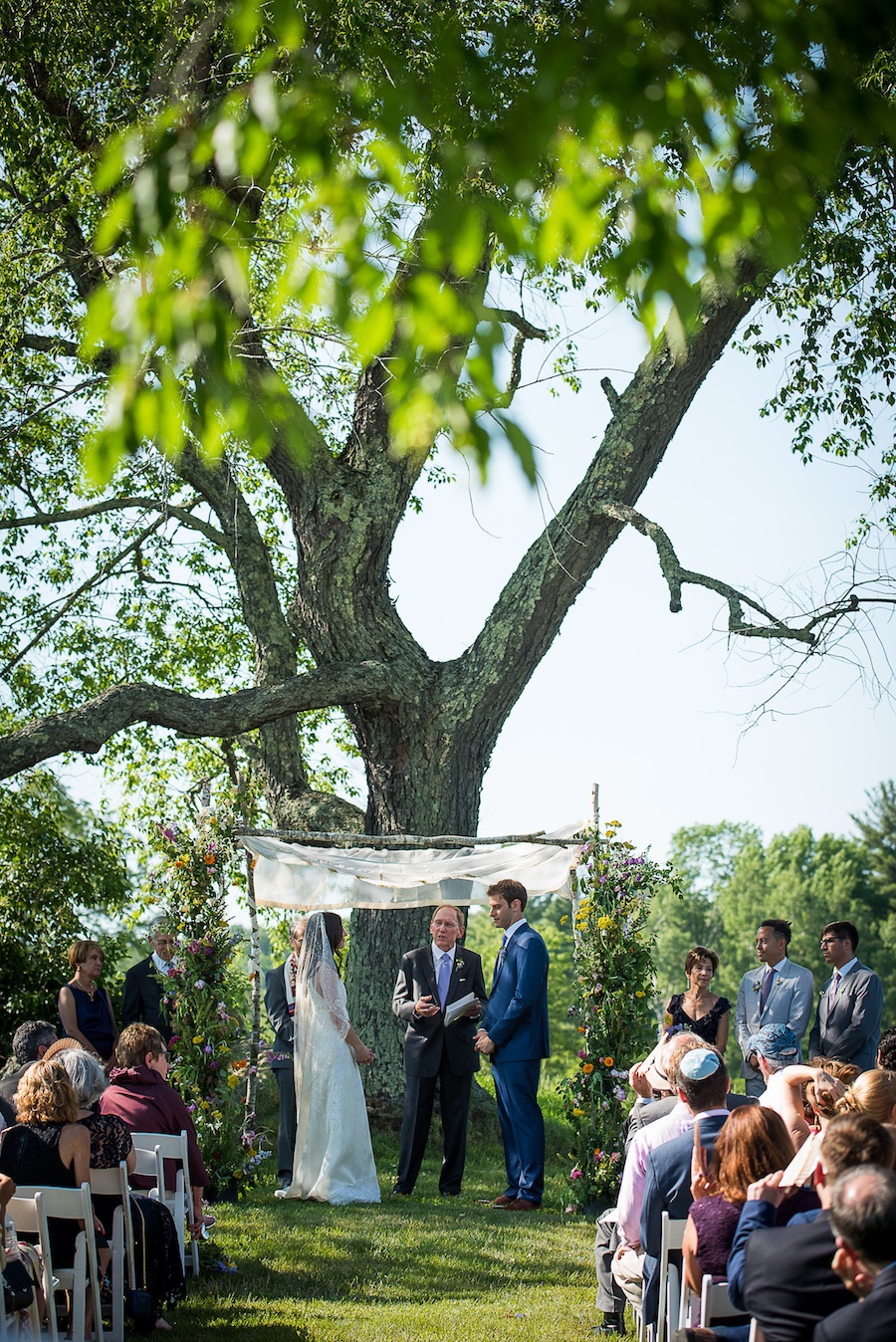 Daniel’s father, Stanley, officiated the couple’s outdoor ceremony. “The whole theme of the day was a lot of family inclusion,” Miriam says. 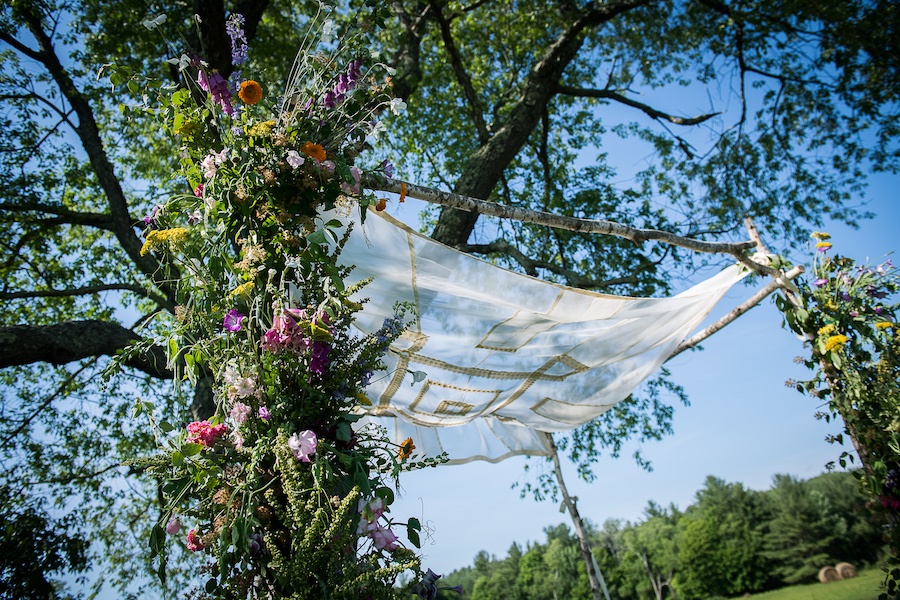 Foraged wildflowers and vines adorned Daniel and Miriam’s chuppah, made with the wedding dress of Daniel’s mother Linda. 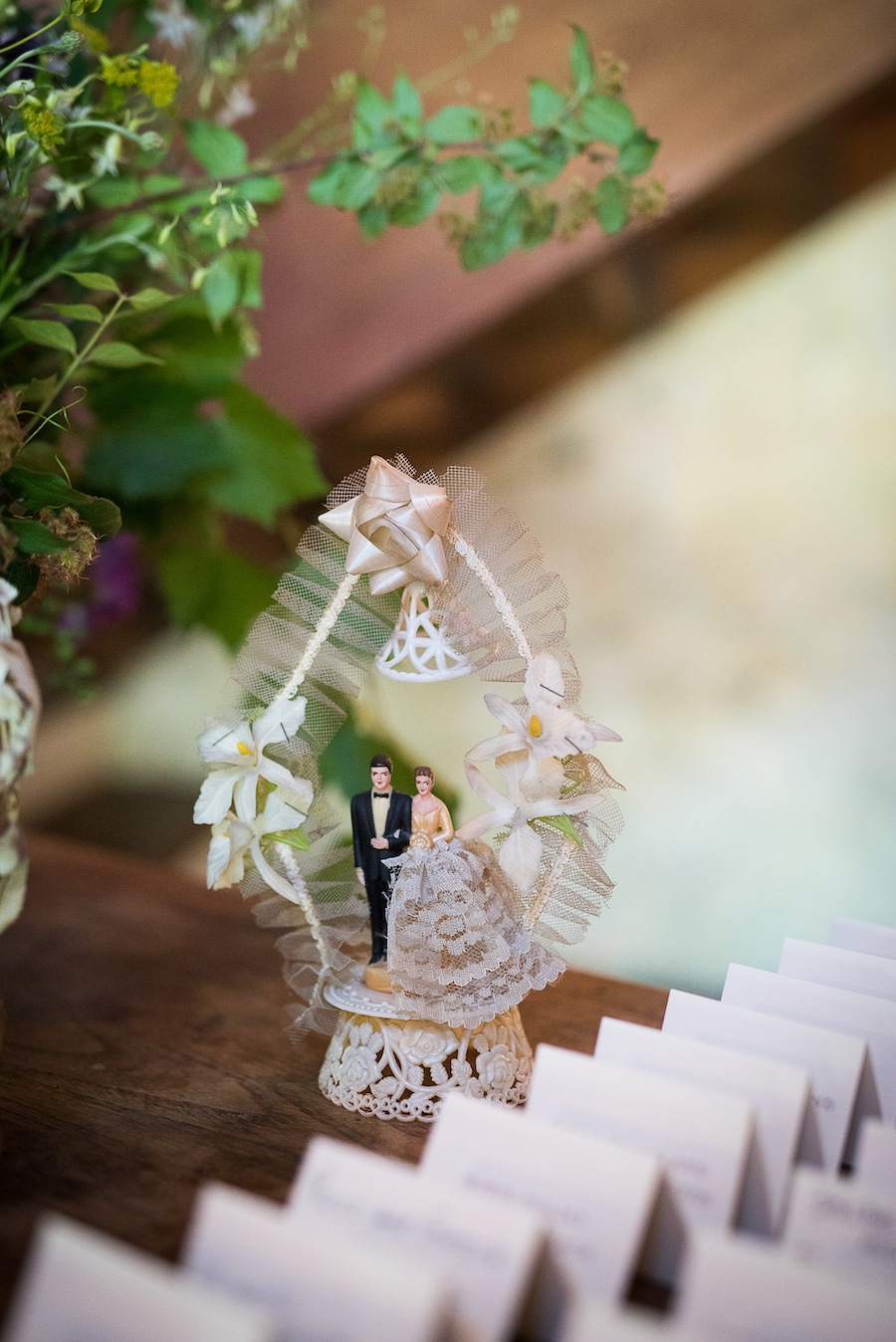 Cake toppers from the bride and groom’s parents’ weddings added a personal touch to their escort table. 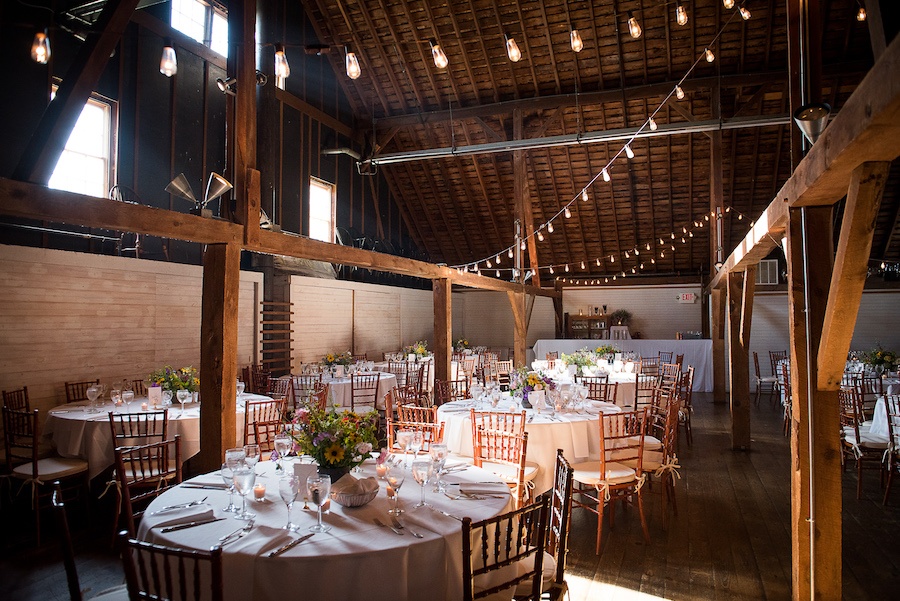 The reception took place in Gedney Farm’s event barn, which the couple dressed up with string lights and wildflowers. “We really wanted something that had a bit of a rustic vibe but wasn’t too fussy or formal,” Daniel says. “Upscale, but not stuffy.” 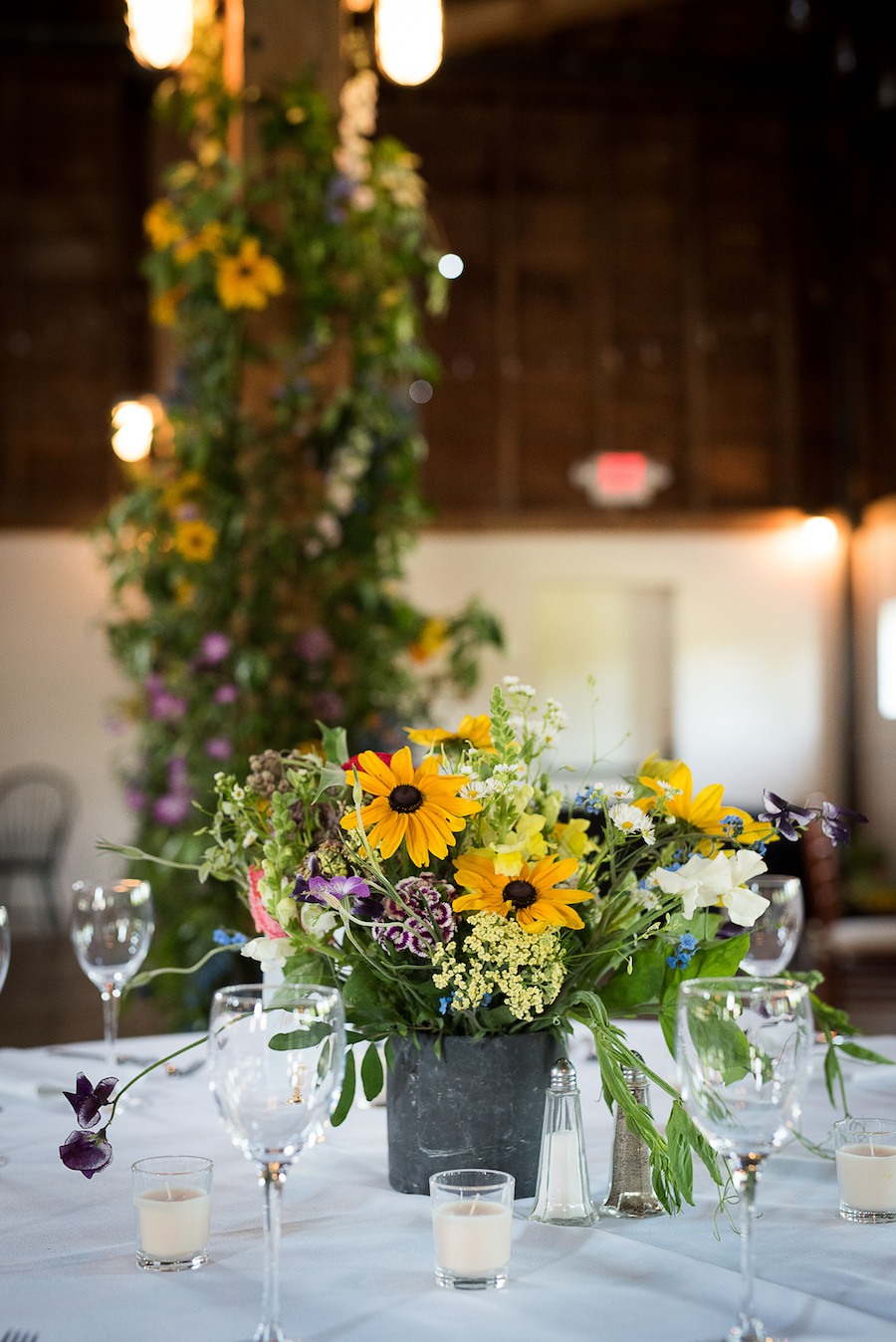 Daniel and Miriam visited Tiny Hearts Farm, a flower farm located 40 minutes west of the Berkshires, a year before the celebration to plan their arrangements. “We never chose specific flowers, but we got to see what was in bloom,” Daniel says. “We just wanted everything to look natural and not manicured.” 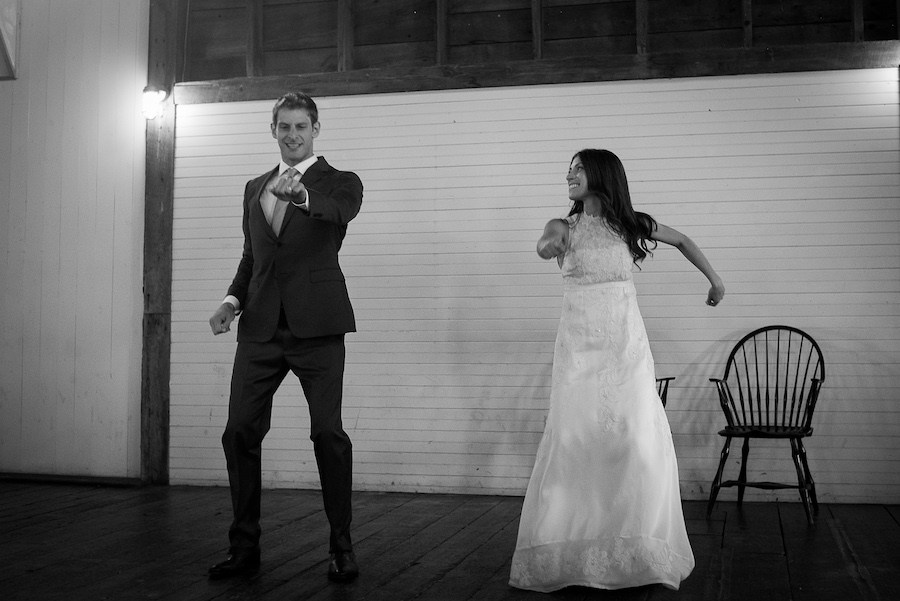 “We had tried to take a real dance lesson and realized quickly that we’re not that good and we’re not that formal,” Miriam says, with a laugh. Instead, for their first dance, the couple surprised the crowd with a choreographed routine to Sean Paul’s “Get Busy.”