Spoiler alert: It was stunning. 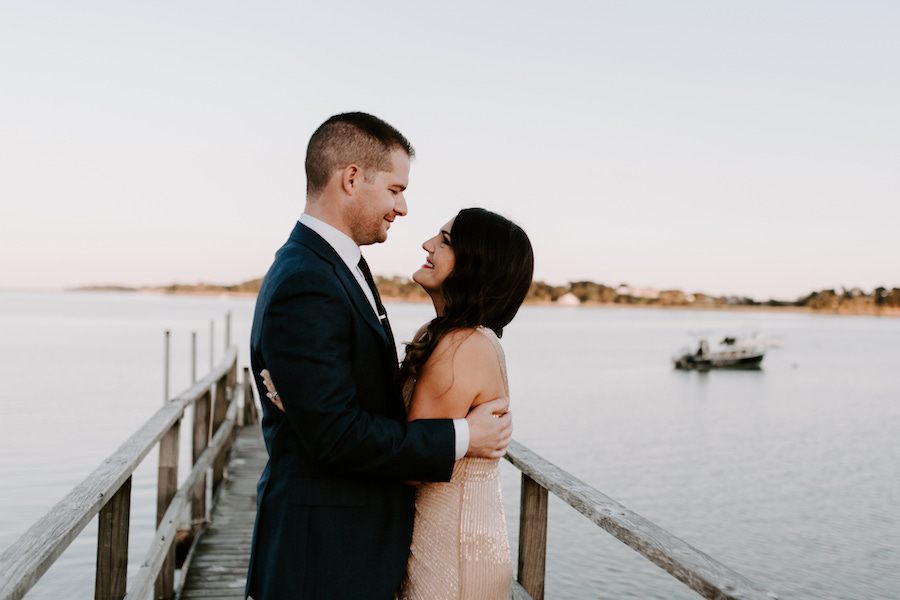 Shauna Gallagher and John Winer’s love story began quietly, but not casually. The pair met in 2011 when they both started jobs at Boston.com, working just two cubicles away from each other in the marketing department. “It was kind of love at first sight for both of us,” Shauna says. “Except it was obviously really awkward meeting someone at work because it had to be a little bit of a secret.” The couple kept their relationship under wraps for some time, but eventually their coworkers started to catch on. A little while later, Shauna left the company to take a job elsewhere, but the couple’s relationship continued on as strong as ever.

In 2016, Shauna and John bought and began renovating their first home, which kept them busy for several months. “I knew we were going to [get engaged] because we had just made this life commitment together to buy a home, but I didn’t expect it to happen within the same calendar year,” Shauna says. John had other plans though. On a Thursday evening at home after work, Shauna noticed he was acting strange. “[He was] very nervous but I couldn’t tell what he was nervous about,” she recalls. She was standing in the kitchen with her back to John, when suddenly she turned around to find that he was on one knee. “He talked about how we bought this house together and how he wanted to [propose] in our space,” Shauna says. Her reaction? Laughter and tears. “I have a weird nervous laugh and it’s kind of inappropriate, but I just was laughing,” she says. “I can remember him being like ‘Shauna I’m being really serious.’ But I couldn’t believe it was actually happening.”

After the proposal, while the couple was engrossed in their new home and in their careers, wedding planning took a back seat. They visited Wequassett Resort and Golf Club in January 2018 and “both really, really loved it,” Shauna says, but the couple didn’t book the venue. A few months later, they were back at the Wequassett having dinner and began talking about how beautiful the setting was. So they emailed the representative they’d toured the venue with months earlier to check if the date they had in mind—now seven weeks away—was still available. It was. “It was wild, but I was like ‘We need to just do this so we can move on, and start a family, and do all that stuff,’” Shauna says. “It was kind of fate that that date was still available.”

With their venue booked, Shauna and John worked quickly to plan the wedding of their dreams: an intimate celebration that was anything but “cookie cutter,” brought to life by a team of nearly all-female vendors. “I had really wanted to support small businesses owned by women and spend my money really carefully, and they all really rallied behind us,” Shauna says. In the end, planning a wedding in seven weeks wasn’t as stressful as it sounds, the bride says, because the couple was determined to keep things low-key. “We almost positioned it more like a wedding celebration than a formal wedding,” Shauna says, “We really just wanted people to come, have a good weekend on the Cape, and have a really good party with us.” 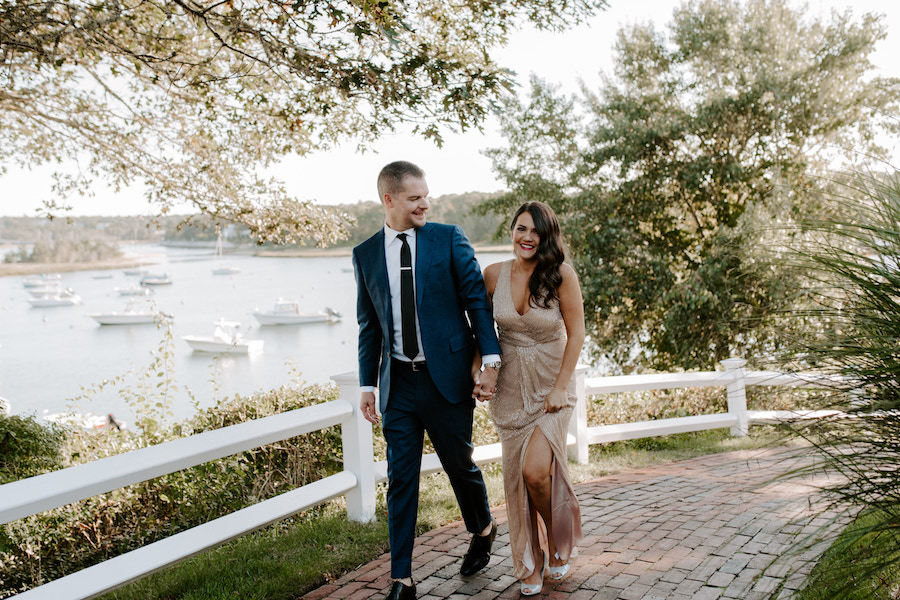 Rather than donning a typical bridal gown, Sauna opted for a champagne-hued Parker frock for the big day. “People kept telling me I looked like an old Hollywood movie star and that was really what I was going for,” the bride says. 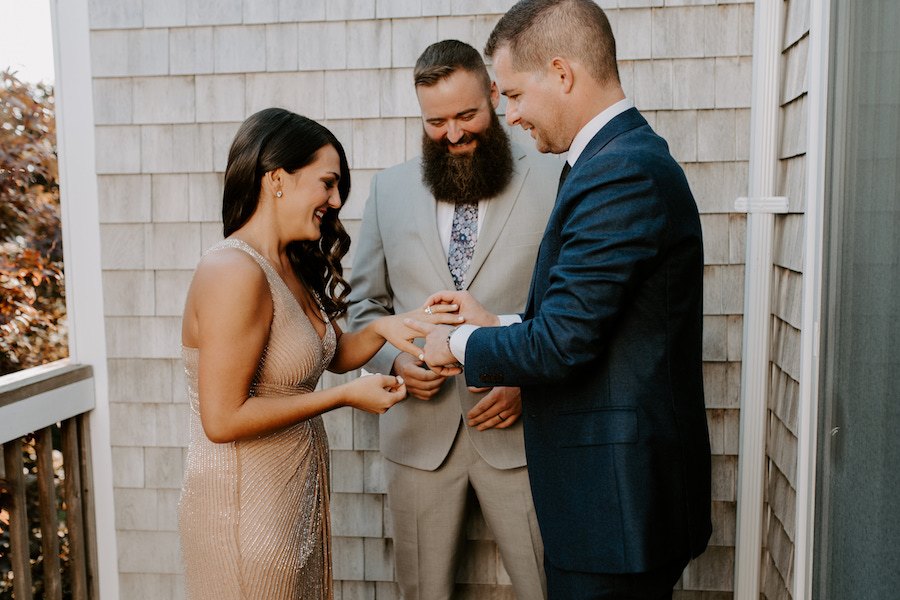 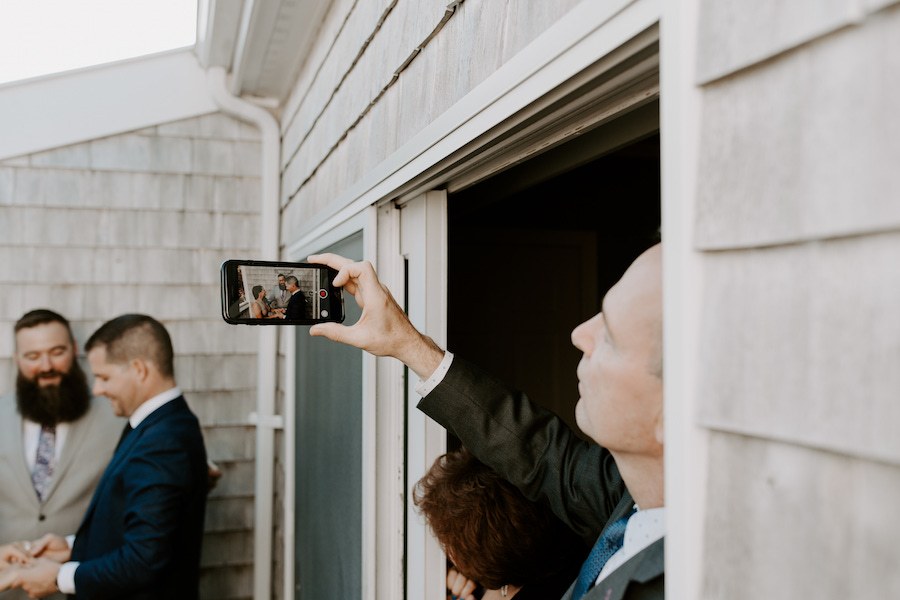 Shauna and John only invited about 20 people—including their parents, siblings, and a few close friends—to attend their intimate ceremony. 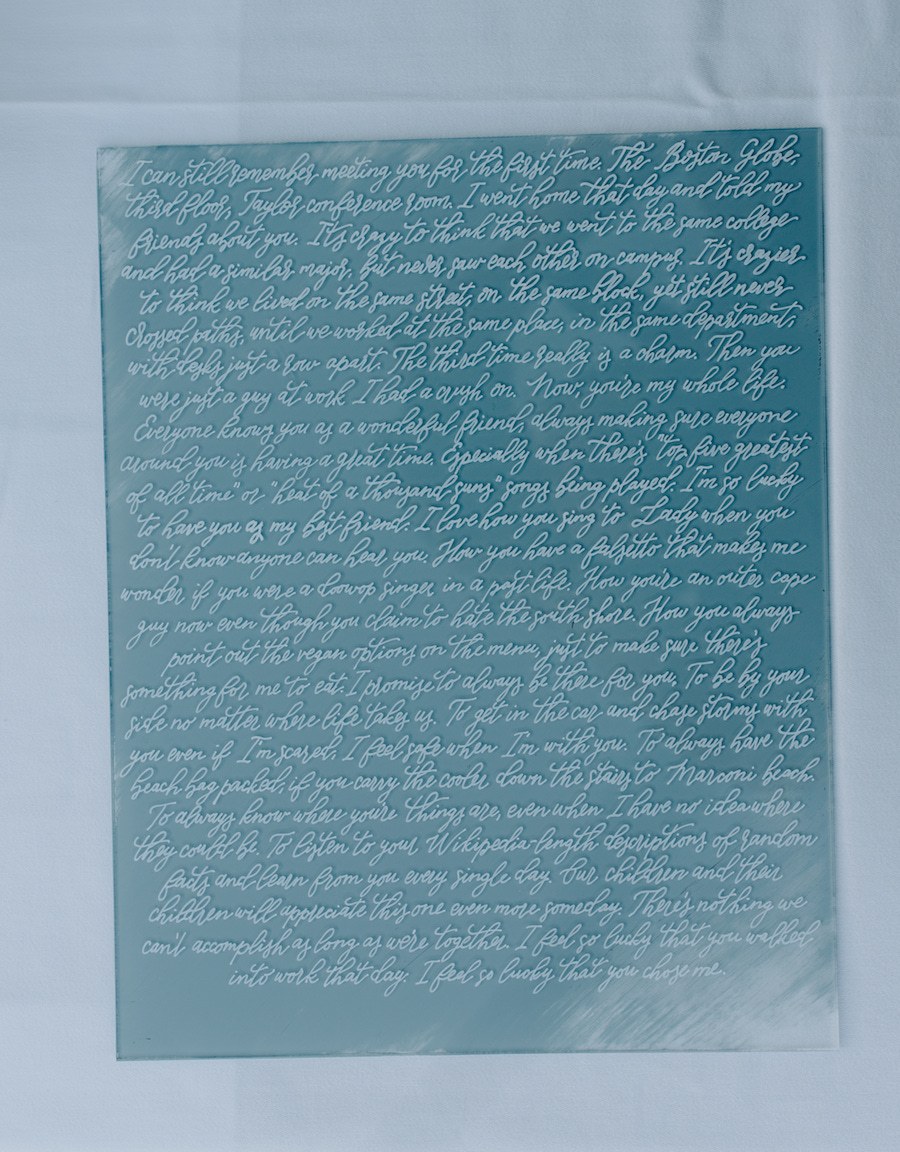 The couple displayed their vows on acrylic signs during cocktail hour so that the 60 additional guests who didn’t attend their ceremony could read them. Today, the signs hang in Shauna and John’s bedroom. 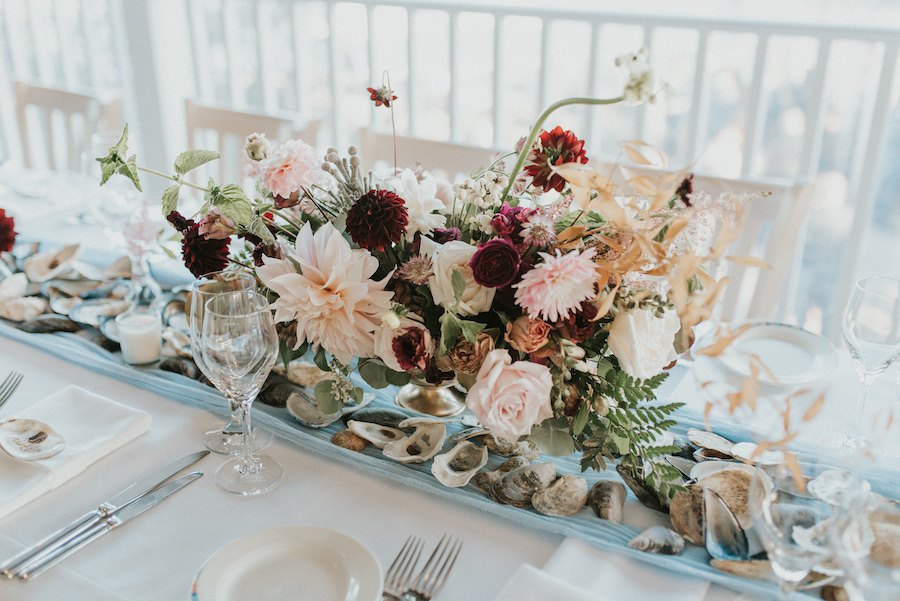 The bride and groom wanted their tablescapes to be “coastal and autumnal, but unexpected,” the bride says. For their color palette, they drew inspiration from Cape Cod sunsets, and surrounded their arrangements of cafe-au -ait dahlias, lisianthus, and ranunculus with shells that Shauna had collected. 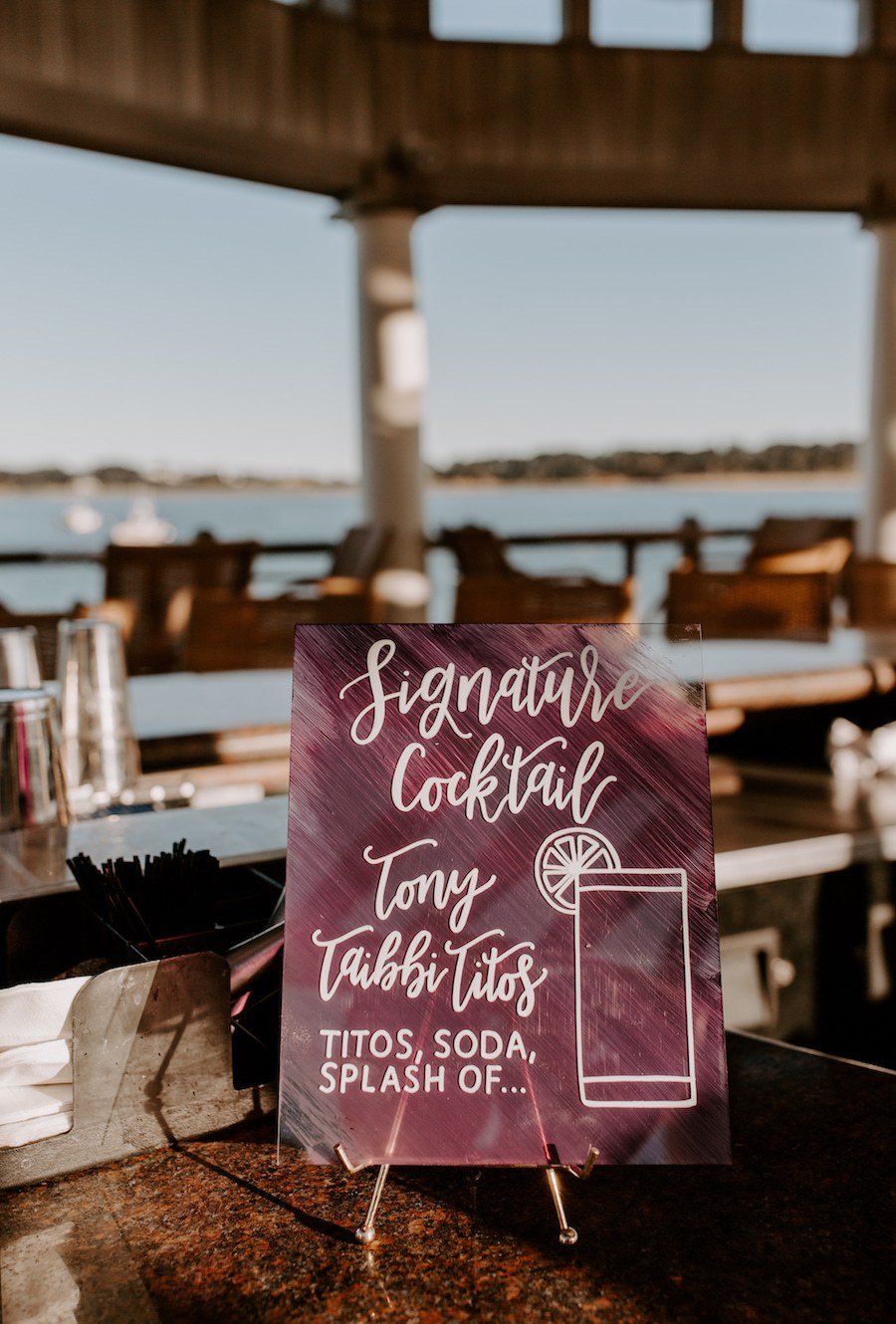 Shauna and John’s signature cocktail, called “Tony Taibbi Titos,” was part of an inside joke with two of John’s friends. It featured Tito’s vodka, soda, and a splash of anything the guests wanted to add. 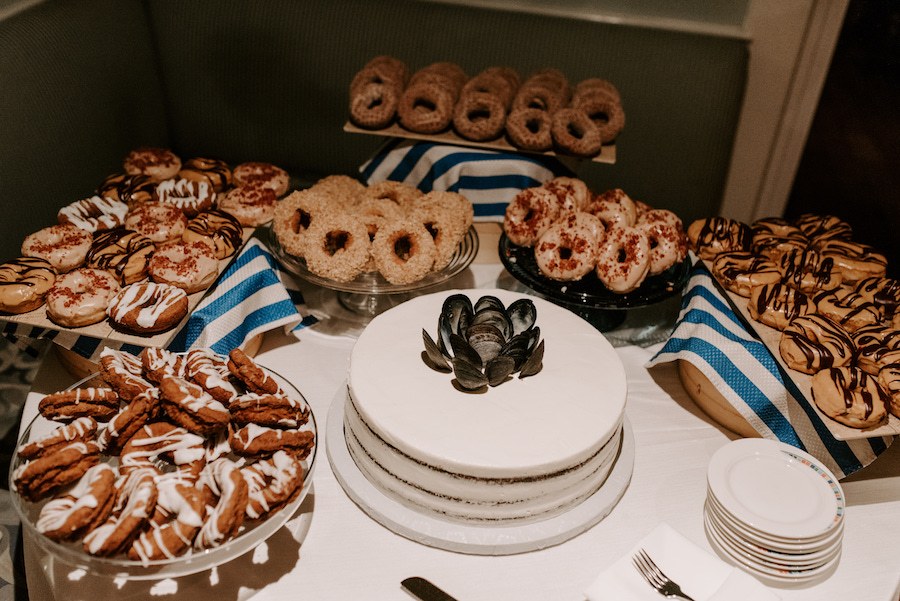 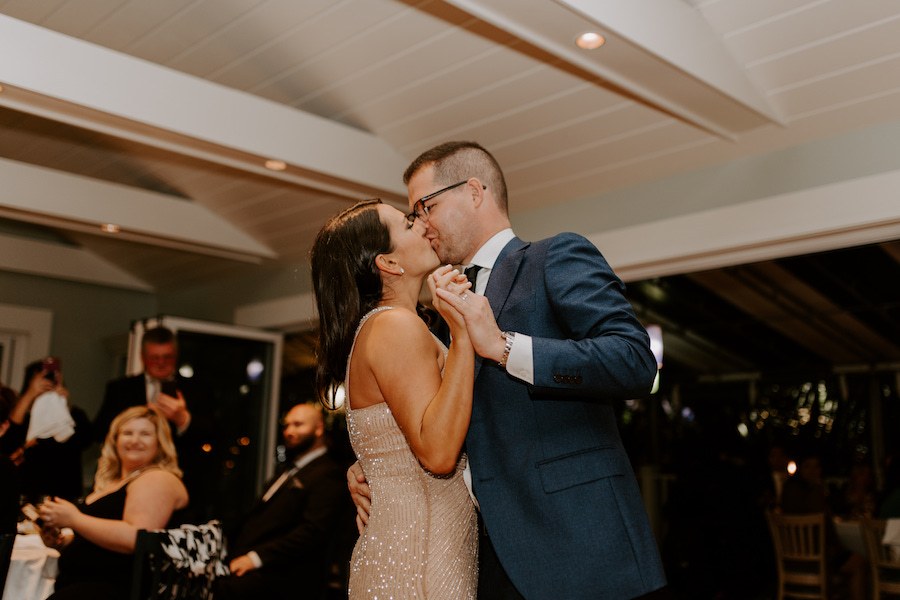 After cocktail hour and a sit-down dinner on the porch, Shauna says everyone “literally danced their butts off all night” to Motown music and songs by Billy Joel and Hootie & the Blowfish. The couple’s first dance was to Fleetwood Mac’s “Say You Love Me.”