These Brides Threw the Most Beautiful Beachside Bash

Their summer wedding in Osterville was filled with sea glass and sunshine. 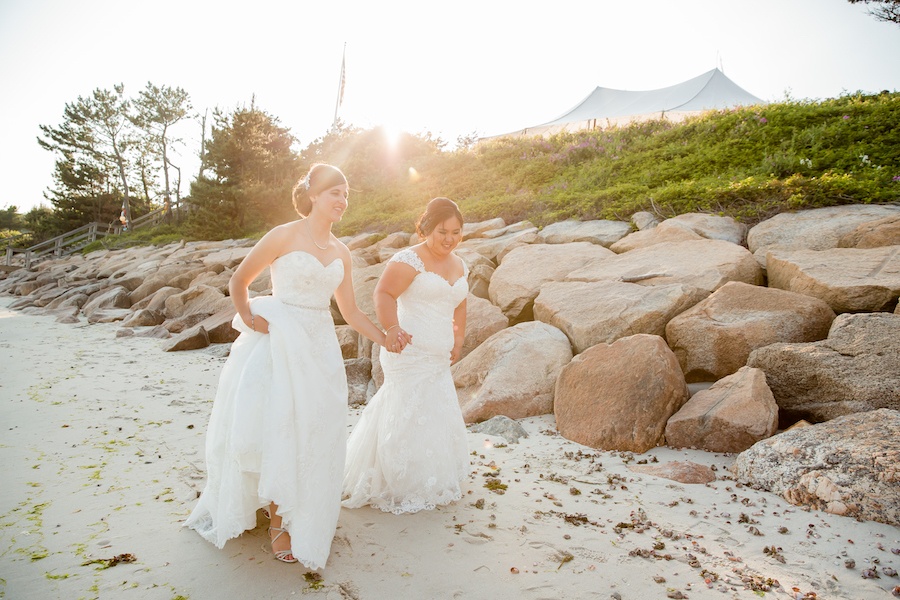 Katie Martore and Margaret Lin had an instant connection. In 2015, they met on Coffee Meets Bagel while they were both living in Boston, where Margaret was completing a fellowship at Beth Israel Deaconess Medical Center and Katie was working as a teacher. For their first date, they grabbed a bite at Orinoco in Brookline Village and talked for four hours straight. “I think on a lot of first dates [the conversation] is pretty superficial, but we were talking about our thoughts on life, and family, and religion. Kind of everything,” Margaret recalls. They hit it off, but it wasn’t quite smooth sailing from there on out. The couple broke up seven months later, but they “never really got over the other person,” Margaret says. “We both needed to work on ourselves and grow as human beings, but then we were ready to be together again,” Katie adds. They started dating again five months later and have been inseparable since.

About a year later, in March 2017, Katie and Margaret knew they were ready to get engaged, so they each asked the other’s parents for permission to propose, and Katie began planning. She decided she would pop the question outside of Margaret’s apartment, where the two had had their first kiss. One day after Margaret got off a shift at work, Katie asked her to walk with her to the library to drop off a few books. “Margaret had no idea what was happening, so she was like ‘I’m going to check out all these books,’ and what was meant to be a five-minute errand turned into like 45 minutes,” Katie recalls. “I definitely made her anxiety a lot worse,” Margaret says, with a laugh. Finally, when they’d left the library and made it back outside Margaret’s apartment building, Katie handed Margaret a pressed penny inscribed with the words “Will you marry me?”—a nod to their tradition of exchanging customized souvenir coins.

Margaret bought a ring for Katie, too, but she wasn’t able to wear it: The Catholic school where Katie worked wouldn’t allow for openly gay teachers, the couple says. So Katie asked Margaret to wait to propose until the summer, when the couple would be moving to San Francisco. Before they packed their bags, the couple headed to Katie’s family’s beach house in Osterville—her favorite place. That day, Margaret proposed on the beach. “I knew it was coming so I even ironed my shirt in the morning. I was ready to go,” Katie says. “She ironed a tank top!” Margaret adds, with a laugh.

When it came time to start planning their big day, choosing the venue was a no-brainer: They wanted to celebrate at Katie’s family’s house on the Cape. After a ceremony at St. Andrews by the Sea, a century-old church overlooking the Nantucket Sound in Hyannisport, they threw a tented reception featuring nods to their beachy surroundings such as sea glass and a blue, gold, and pastel color palette. Then, when the sun set, Katie, Margaret, and their 123 guests hit the dance floor. “[The floor] was totally full the entire time that it was open,” Margaret says, “It was so fun.” 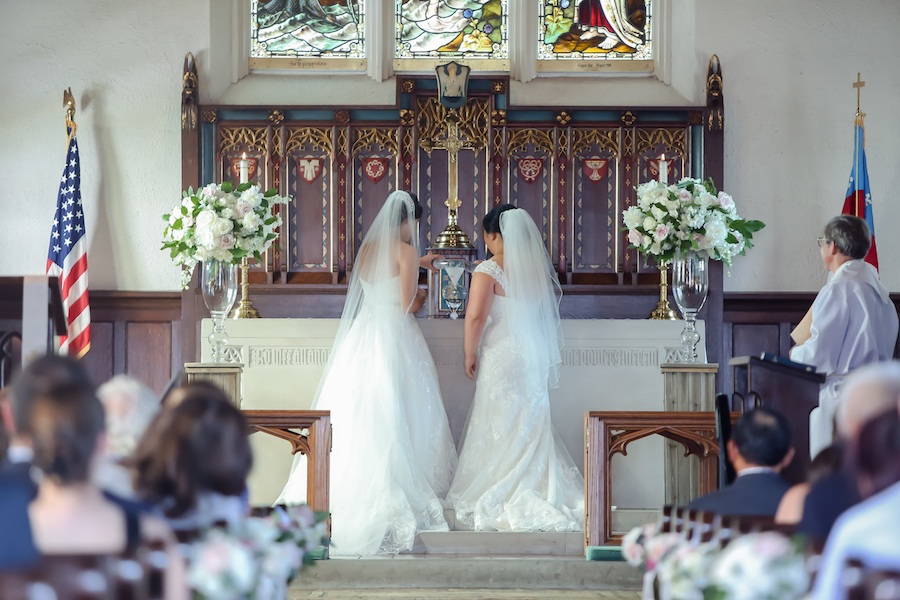 As part of Katie and Margaret’s wedding service, they did a “sand ceremony.” Margaret collected sand from the California beach she frequented as a child, and Katie bottled sand from the beach near her parent’s Osterville home. During the ceremony, they combined each vessel of sand into a heart-shaped glass container. 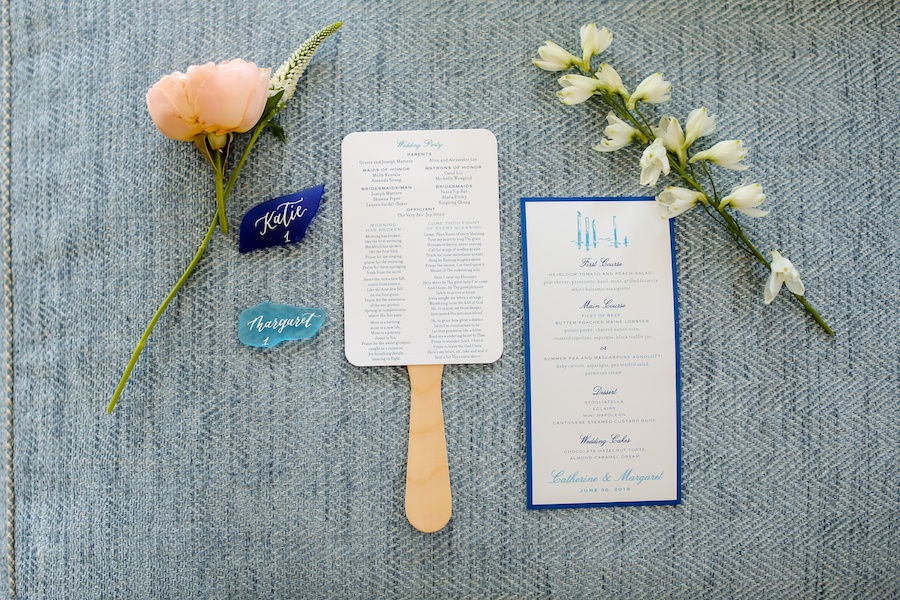 Michelle Wengrod, Margaret’s maid of honor and childhood friend, designed the couple’s ceremony program and menu, which incorporated a harbor motif. Since St. Andrews by the Sea doesn’t have air conditioning, the couple’s program pulled double-duty as a fan. 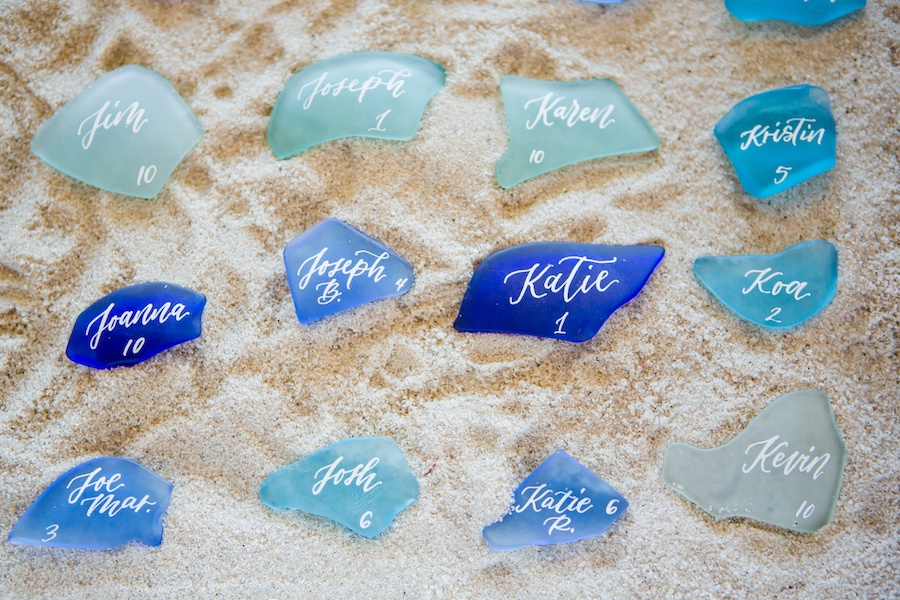 Katie and Margaret’s escort cards featured hand-drawn calligraphy on sea glass. “That was something we knew we wanted to do from the beginning, before we even talked with our wedding planners, because I used to collect sea glass when I was a kid—although not nearly enough for 123 people,” Katie says. 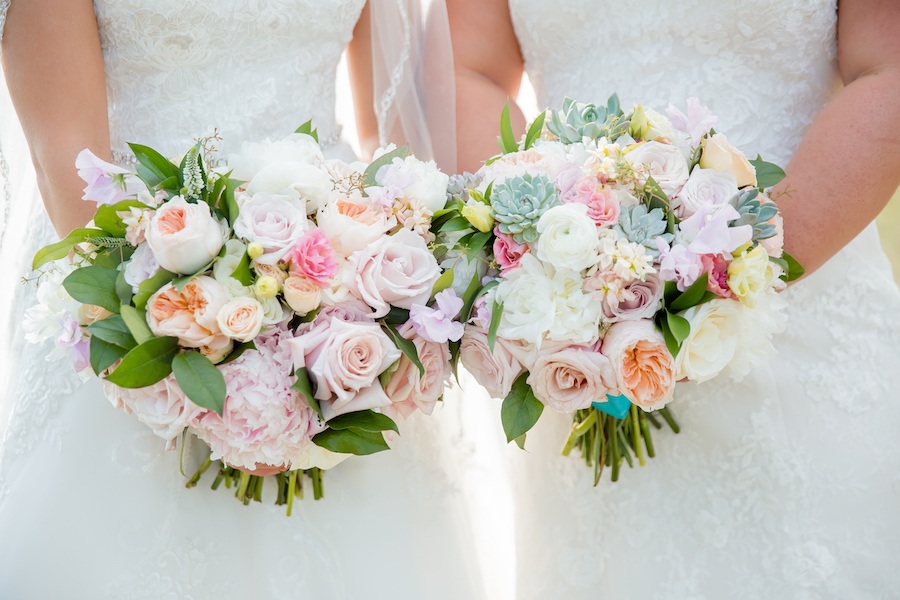 “I really like succulents, it’s pretty much the only plant I can keep alive,” Margaret says. Florist Wild Dahlia incorporated the petite plant in her pastel-hued bouquet. 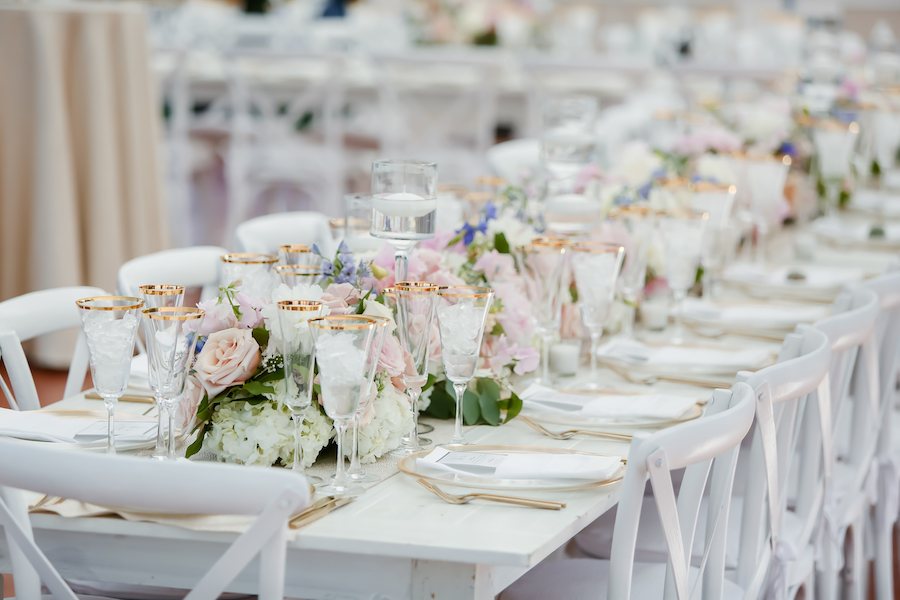 For their reception, the couple knew they wanted their tablescapes to feature plenty of flowers and touches of gold, but let the professionals decide how it would all come together. “We basically told [our planner and florist] what colors we liked and whether we wanted a lot or a little bit of stuff on the table, but we left the rest of it in their hands,” Katie says. “They were really helpful.” 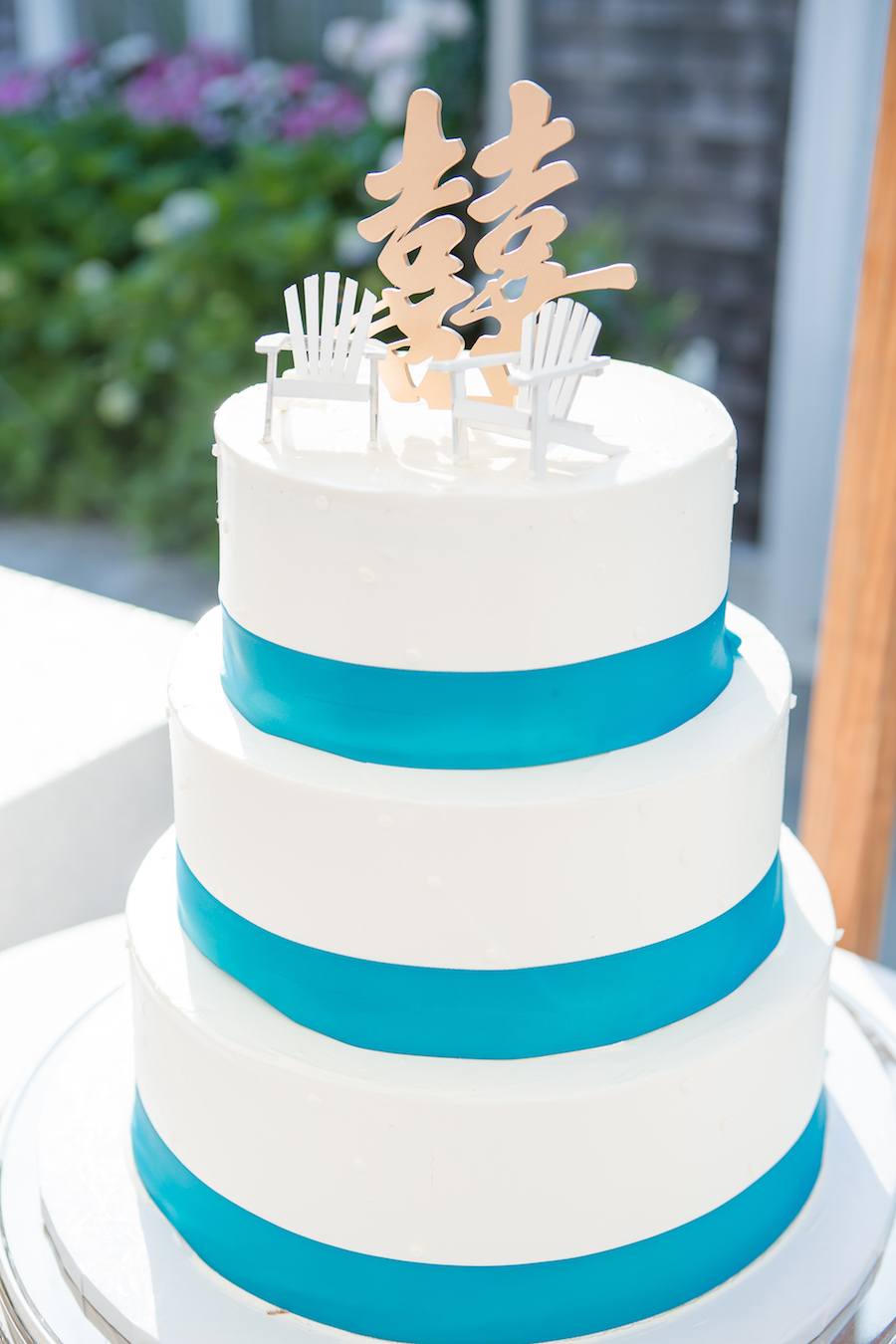 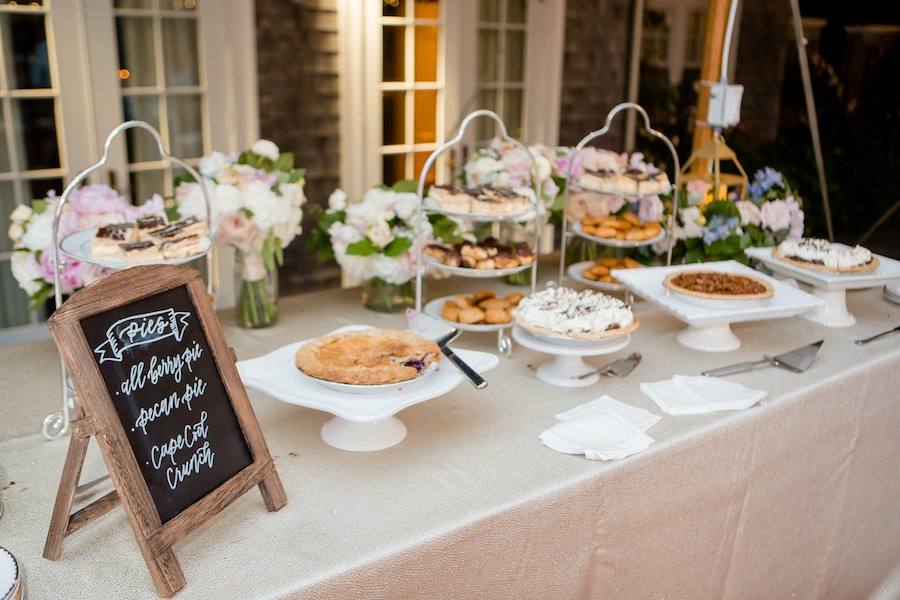 For a late-night snack at their reception, the couple served their guests pie from Centerville Pie Co., as well as pizza. 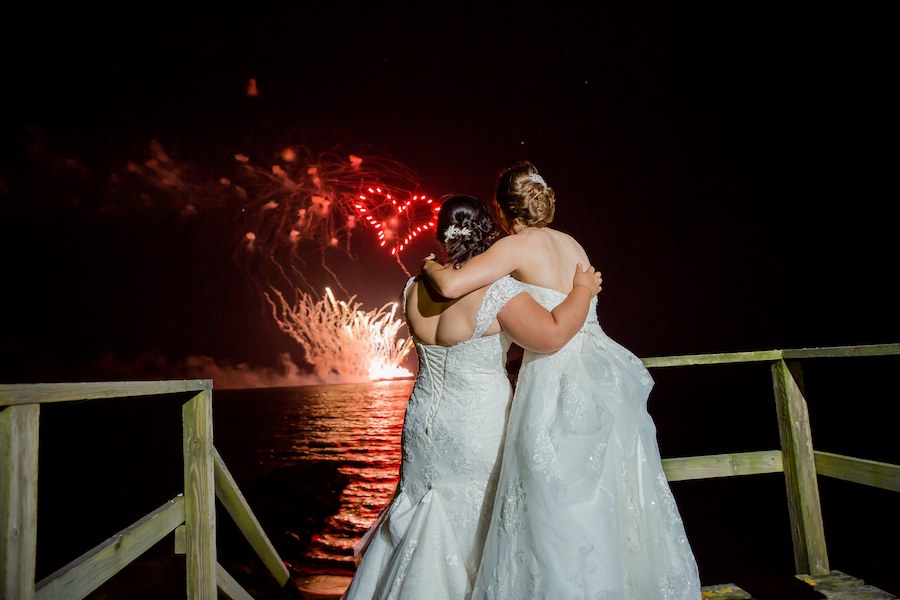 Katie’s mom planned a surprise firework display for the couple’s reception. “It was amazing,” Margaret says, “We thought the wedding was wrapping up and then they were like ‘Everyone take a look at the water.’ It was really beautiful.”