A Backyard Wedding in Newton with Playful, Garden Party-Inspired Details
Subscribe
Follow
I'm a scraper
This search result is here to prevent scraping

Lush florals, a four-tier cake, and a silent disco. What more could you want? 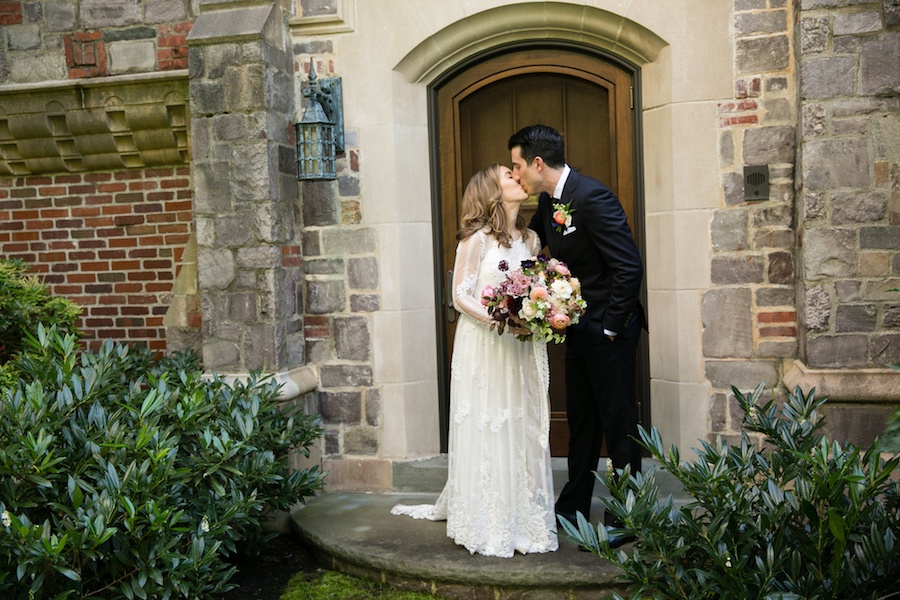 Caroline Trippel and Greg Darnell, both computer-science graduate students at Princeton University, met in Caroline’s academic advisor’s office in September 2014. The professor had assigned them as teaching assistants for the same class, so they met there to discuss their duties. After the meeting, Caroline asked Greg to lunch to continue chatting about the class, but the two “quickly clicked,” Greg says. “We were talking about a lot more than our academics.”

During their three-year courtship, many of the couple’s outings revolved around food. Ice cream, in particular, was a favorite of Caroline’s. On one of their dates, Caroline and Greg stopped for dinner at 4 Charles Prime Rib, a cozy, exclusive supper club in New York City with an ice cream sundae that Caroline had been dying to try. She had just flown in from China the day before, though, and was coming down with the flu, so they left the restaurant before dessert. Six months later, in December 2017, they decided to give the restaurant another go, and scored a midnight reservation. Caroline says she didn’t think Greg, who she calls a “night owl” would mind, but he did. “He was obsessing that the reservation was so late, which was a bit confusing to me,” she recalls. Turns out, Greg was planning to propose that evening and wanted to make sure they’d get into the restaurant early enough to be able to phone their families afterward. So, he found a creative solution. “I wrote a computer program to try to help me refresh the page very quickly and get an earlier reservation,” he says. “It was worth it.” On the night of their dinner, Greg got down on one knee just before dessert. Their waiter then brought over celebratory champagne, and of course, the sundae. They hardly ate it though. “We were so excited about getting engaged and I was calling everybody, so the ice cream basically melted,” Caroline says with a laugh.

Caroline and Greg knew immediately where they wanted to tie the knot: the backyard of Greg’s parents’ house, a beautiful brick Tudor in Newton. “We really wanted something that felt intimate,” the bride says. As for the look of their celebration? “We wanted it to be kind of garden-party-ish,” Caroline says, but not stuffy. They channeled that playful, relaxed vibe with loosely arranged and abundant florals that popped against the lush backdrop of the yard. After a poolside ceremony, mingling, a bit of cake, and dancing, the couple and their 160 guests ended the night with a silent disco, prompted by the town’s 11 p.m. noise ordinance. “[People] would take their headphones off and then realize there’s no music playing and would see everyone just dancing around looking silly, and they thought it was such an awesome concept,” Greg says. “You put [the headphones] back on and you’re immediately immersed back in with everyone else. It was so cool.” 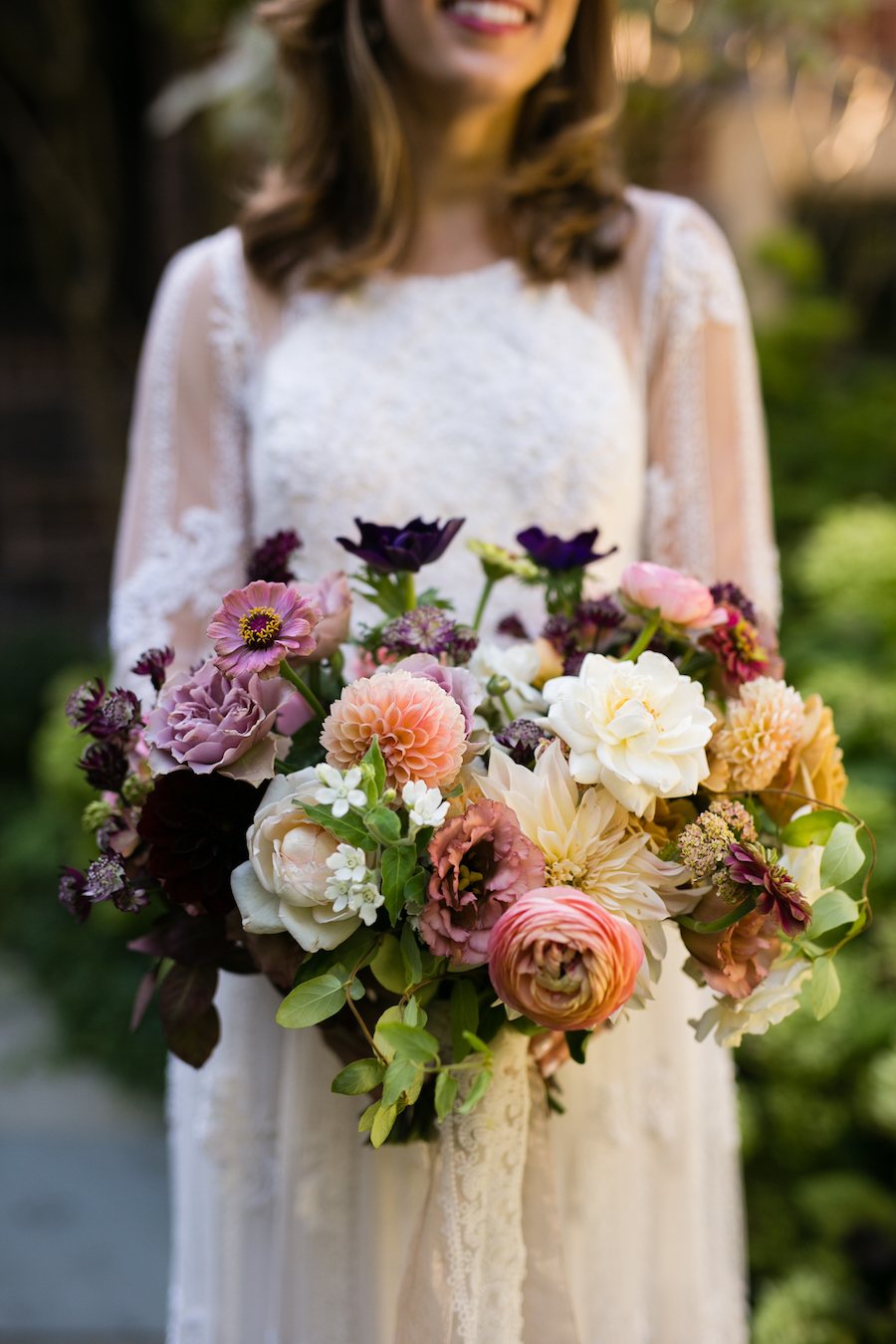 “I wanted something a little antique-looking, but with a warm feel. I really loved what Millie did,” the bride says of her bouquet, which featured anemones, cosmos, dahlias, zinnias and more. 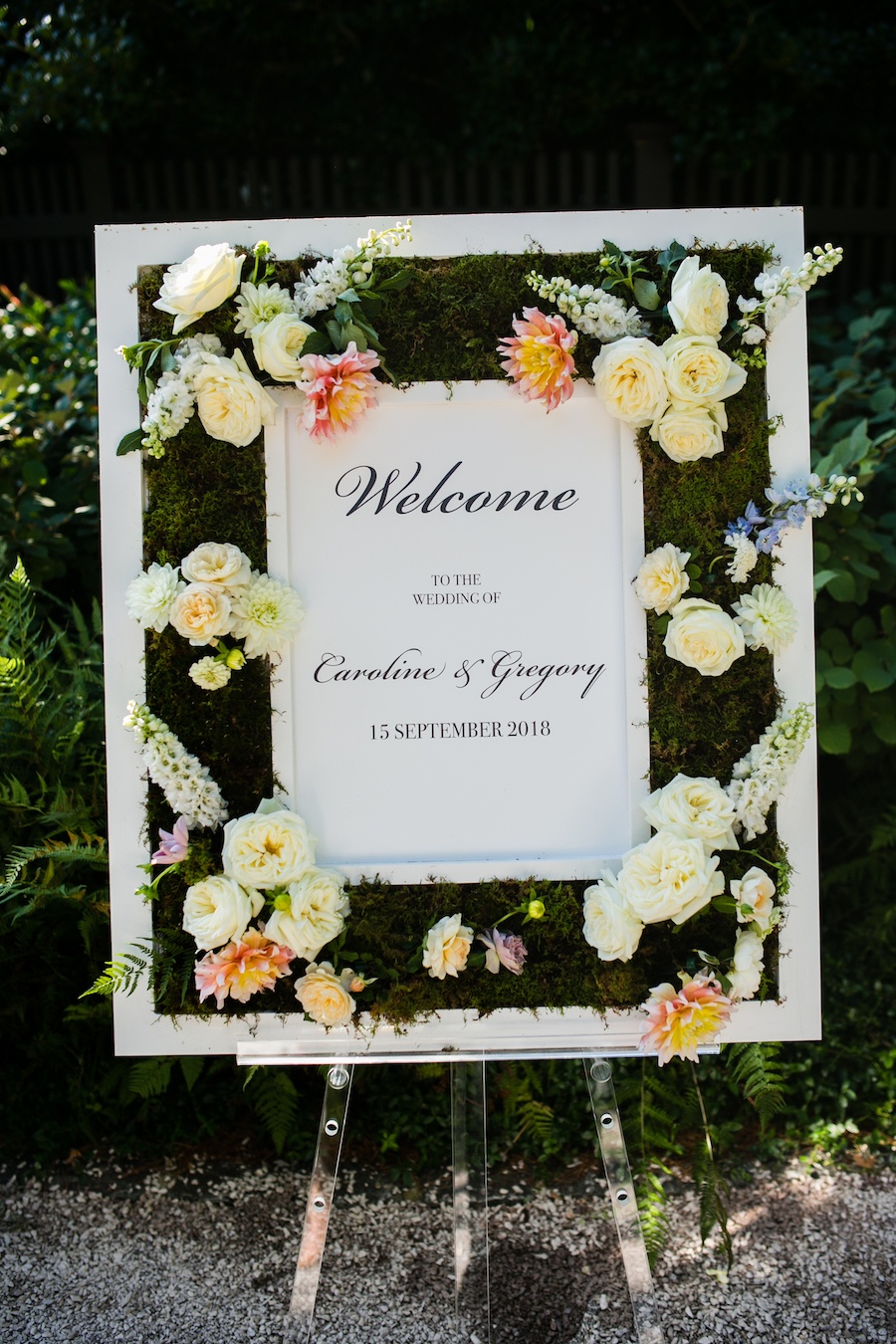 Throughout their celebration, Caroline and Greg paired simple, classic designs with lively, free-flowing floral arrangements. “We don’t ever take ourselves too seriously, but we also wanted things to be formal enough that it got across the importance of the moment,” Greg explains. 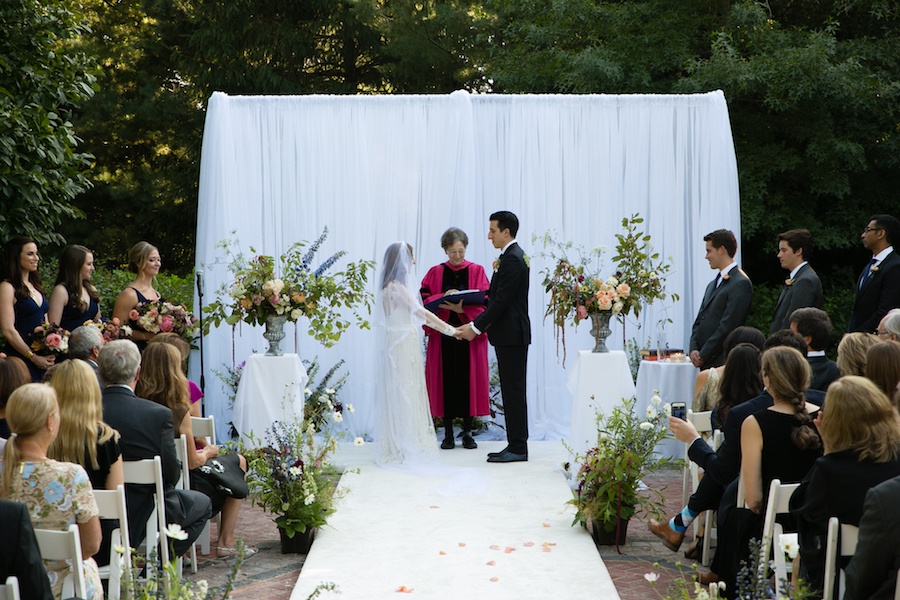 Caroline, who is Catholic, and Greg, who is Jewish, incorporated both of their faiths into their ceremony by reaching out to Bernadette J. Brooten, a professor of religious studies at Brandeis University, who agreed to officiate. “We wanted someone who could help us create something that reflected where both of us were coming from and also able to take us into our future together,” Greg says. 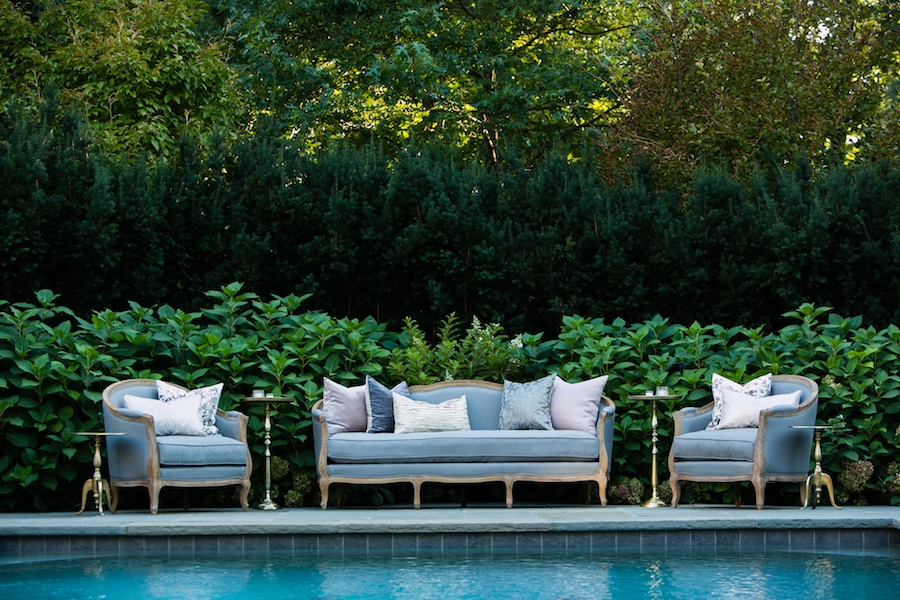 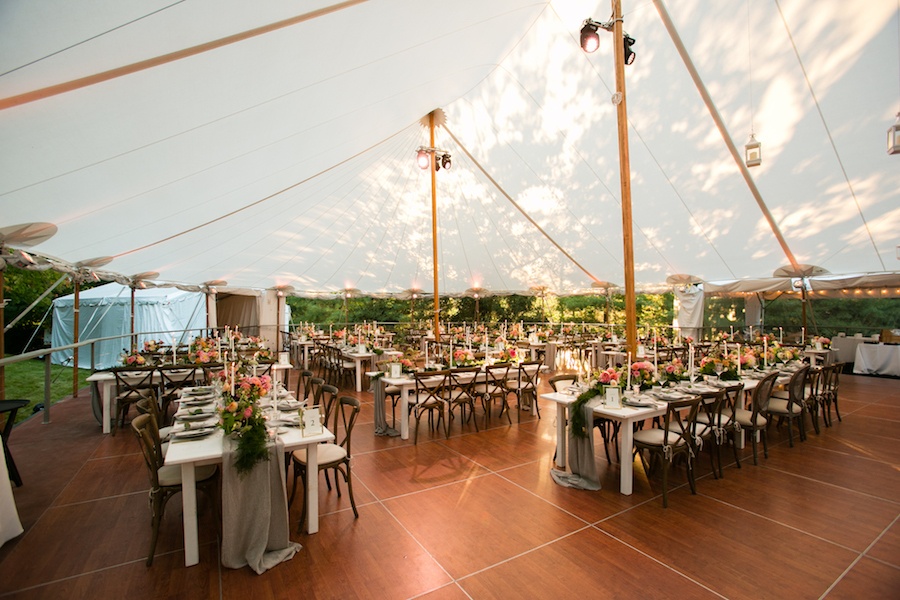 The backyard where the couple wanted to set up their tent featured a steep slope, so Peak Event Services had to raise and level the floor. “When you were actually in the tent it almost looked like you were up in the trees. We were on cloud nine, so it felt like we were 100 feet in the air, but it was maybe eight or 10,” Greg says. “It gave the reception a really spectacular treehouse feel.” 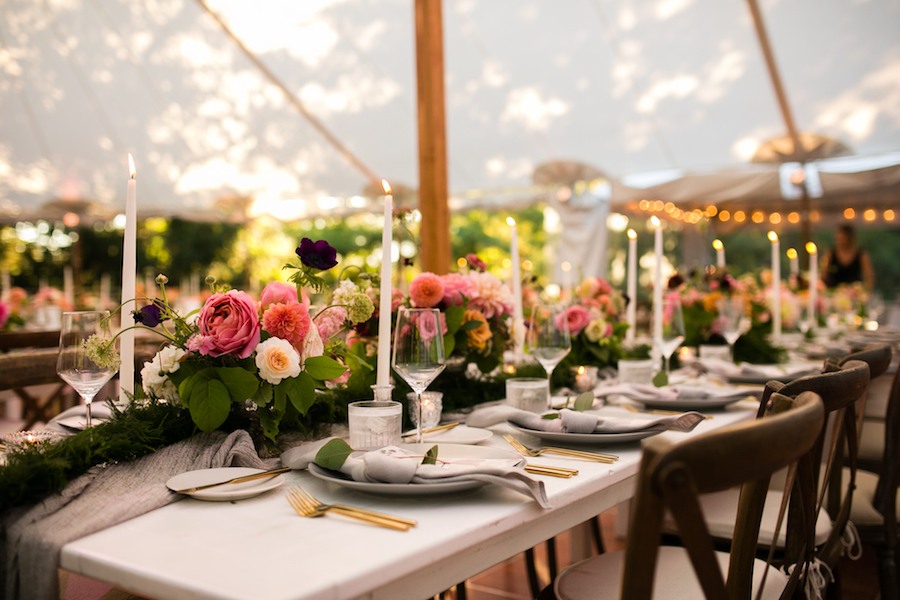 For their tablescapes, Caroline and Greg requested simple, elegant dinnerware and an abundance of vibrant flowers, such as zinnias and dahlias, dotted with candlesticks. “We wanted it to feel very warm in the tent,” the bride says. 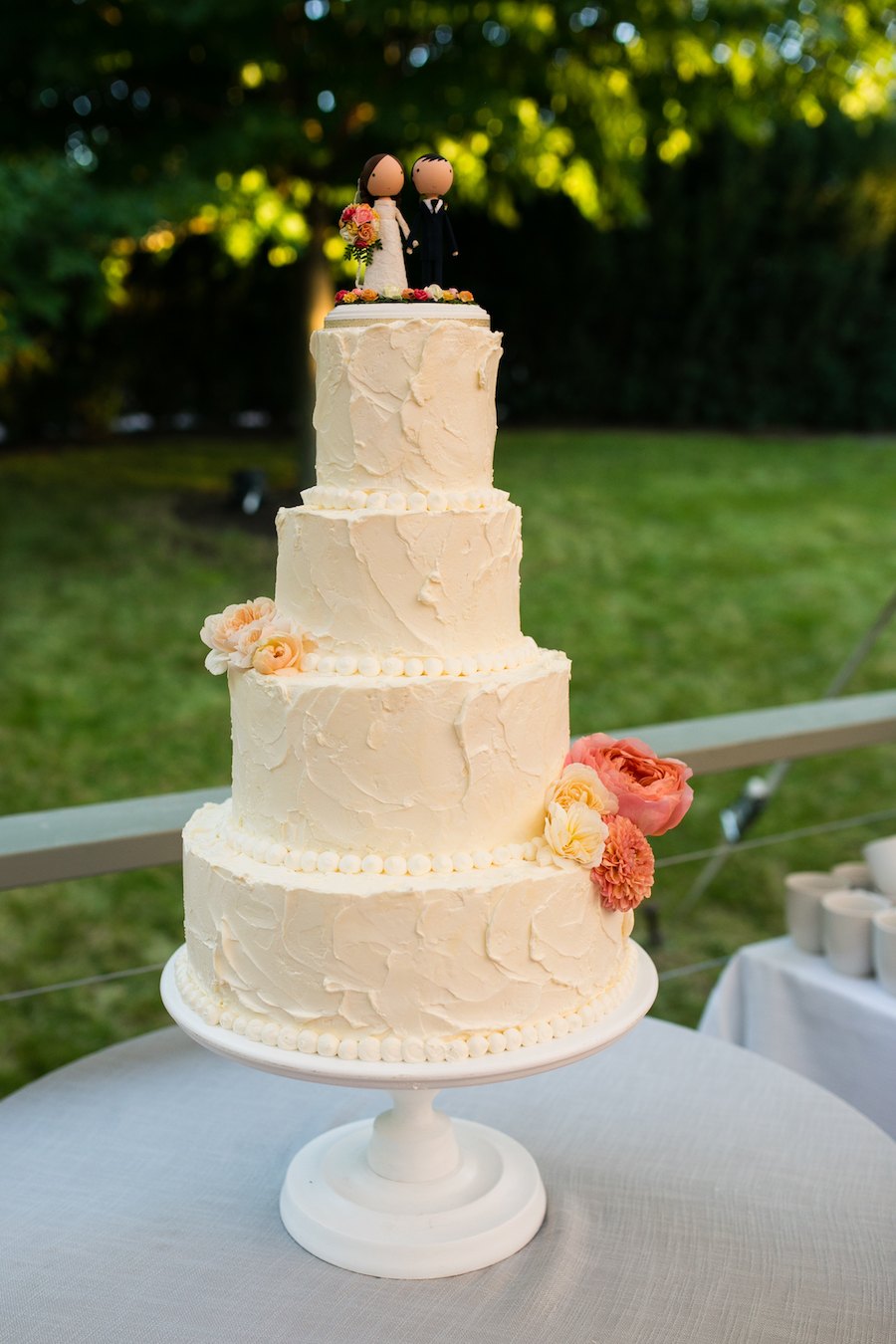 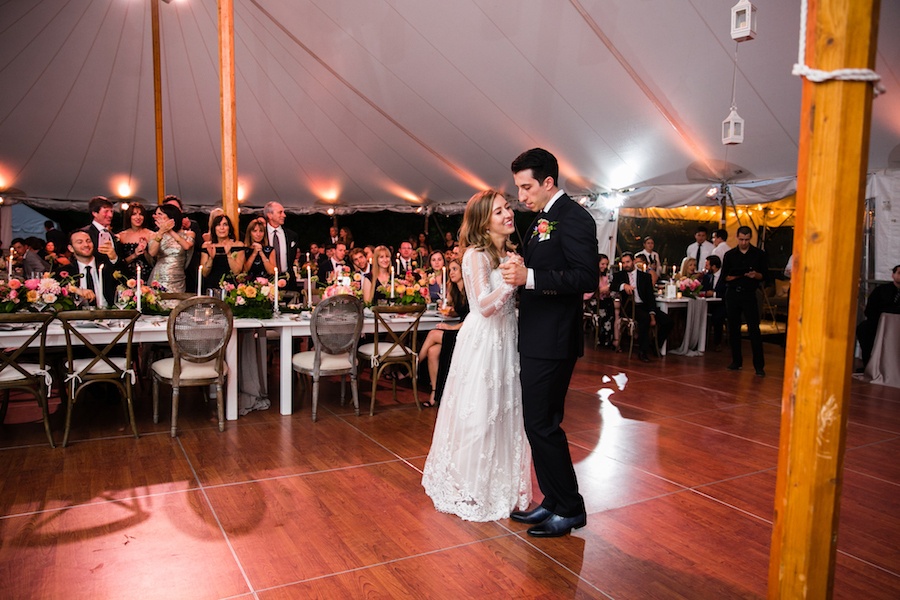 One of the couple’s favorite wedding-day moments? Their first dance to “You Are the Best Thing,” by Ray LaMontagne. “It was a really great moment between us, but it was also a nice way to transition between the ceremony and the reception,” Greg says. “We let some of those nerves go and really just had fun.” 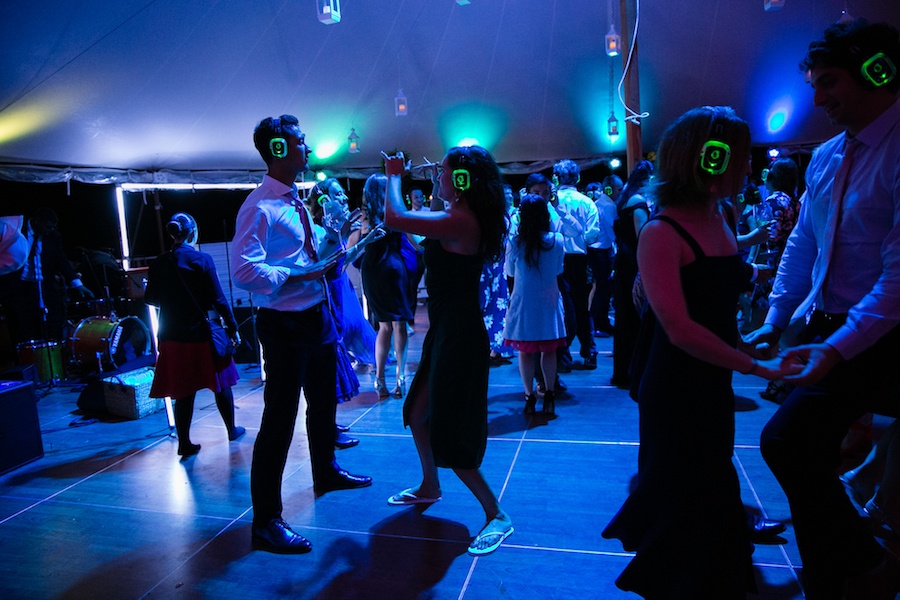 “We’d gone to a silent disco before with my sister in Miami, and it was way more fun than we were expecting it to be, so we thought recreating that idea at the end of the night would be a fun way to send things off,” Greg says.