A Military Couple Threw the Most Charming Connecticut Wedding

To get to their reception, they hopped aboard a steam train. 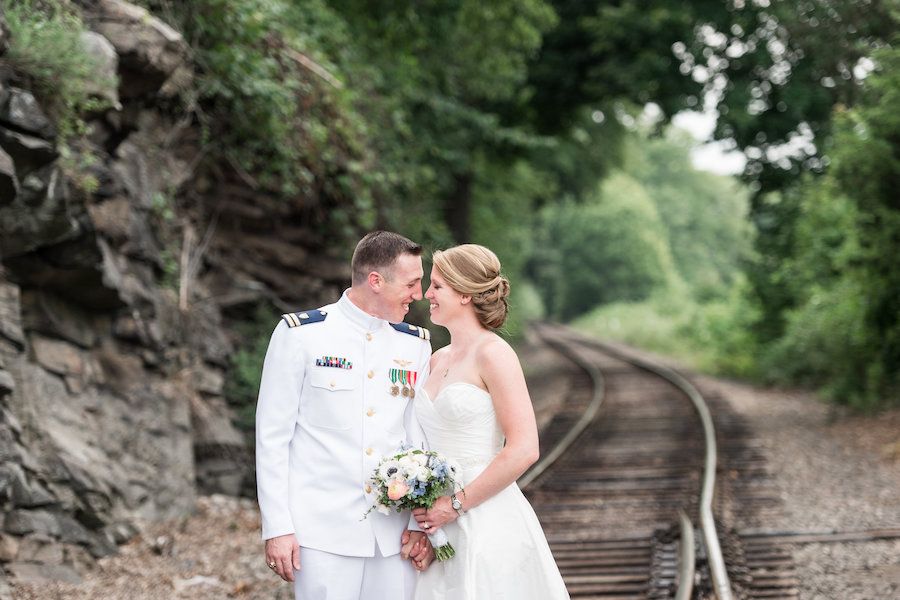 Michelle Simmons and Nick Cosenza met as students at a naval flight school in Florida in 2014, but their relationship wasn’t a romantic one right off the bat. For the first year and a half that they knew each other, they were friends who did everything together, from studying to participating in triathlons to taking trips. After they graduated and each received their air-station assignments though, Michelle found out she’d be heading to Cape Cod, while Nick would be based in Detroit. As Michelle was readying to move north, the pair decided they should start dating. “We realized we were more than friends,” Michelle says. “Over the year and a half we spent together in Florida, our feelings grew and we were like, ‘Hey, we really like each other.’

While living hundreds of miles apart, they committed to talking every day and traveling to see each other once a month, often planning surprise activities for those visits. One weekend in October 2017, Nick flew to Connecticut to attend an alumni event at the Coast Guard Academy, and Michelle drove out to spend the weekend with him. They planned to go apple picking the morning before the reunion and Nick told Michelle they needed to set their alarm for 5 a.m. “I was like, ‘What apple picking place opens that early?’” Michelle recalls. Though “slightly grumpy,” she agreed, and the next morning they drove for an hour until Nick finally pulled into a country club parking lot. “I’m like, ‘Where are we?’” Michelle says. Then, she saw a sign with a hot air balloon on it. “I instantly went from a little grumpy to ecstatic,” she remembers. Up in the air, they took in the fall foliage and watched the sun rise. Then the pilot offered to take their picture. They give him their camera, and Nick got down on one knee. “I was really, really surprised,” Michelle says. When they landed, they celebrated with champagne before heading off to the Coast Guard Academy to share the news with friends.

When it came time to choose their venue, Michelle and Nick homed in on Connecticut, where Nick grew up. When Michelle saw photos of the Lace Factory, a 19th-century mill turned charming, light-filled event space in Deep River, she was head-over-heels. “I really liked the rustic feel of it,” she recalls. “I was like, ‘I’m pretty sure this is the place.’ It was exactly what I’d pictured.” The couple wanted to keep the look of their reception simple and casual, so they incorporated homespun elements like wood and burlap as well as all-white tablescapes featuring a variety of wildflowers in petite vases. On their wedding day, Nick and Michelle mingled with friends and family, and of course, made time for a little bit of dancing. “We really just tried to savor every minute of the day,” the bride says. “We knew it was going to go by quickly.” 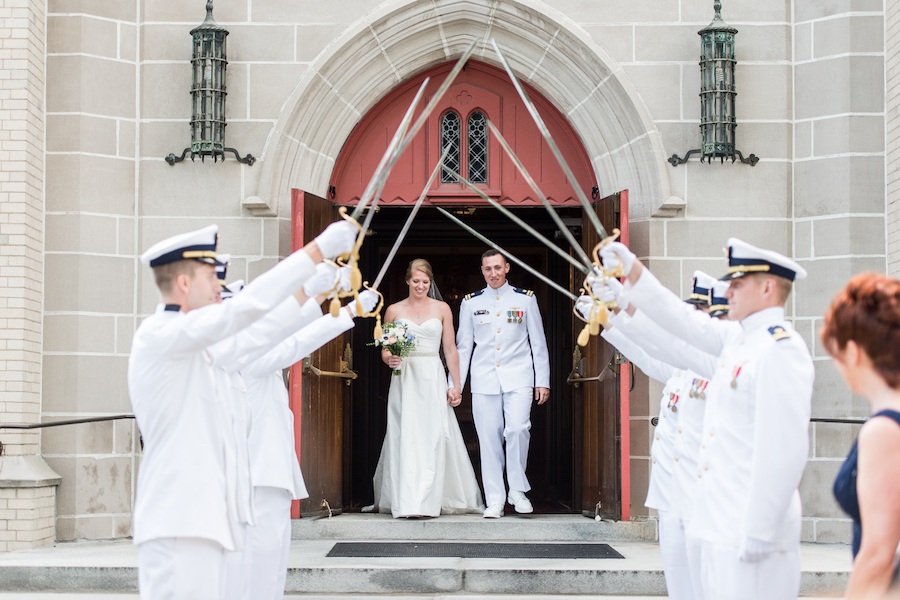 As part of their traditional military wedding, Nick and Michelle exited the church by passing under a saber arch. “That was important to us because the Coast Guard is such a big part of who we are and why we’re together,” Michelle says. 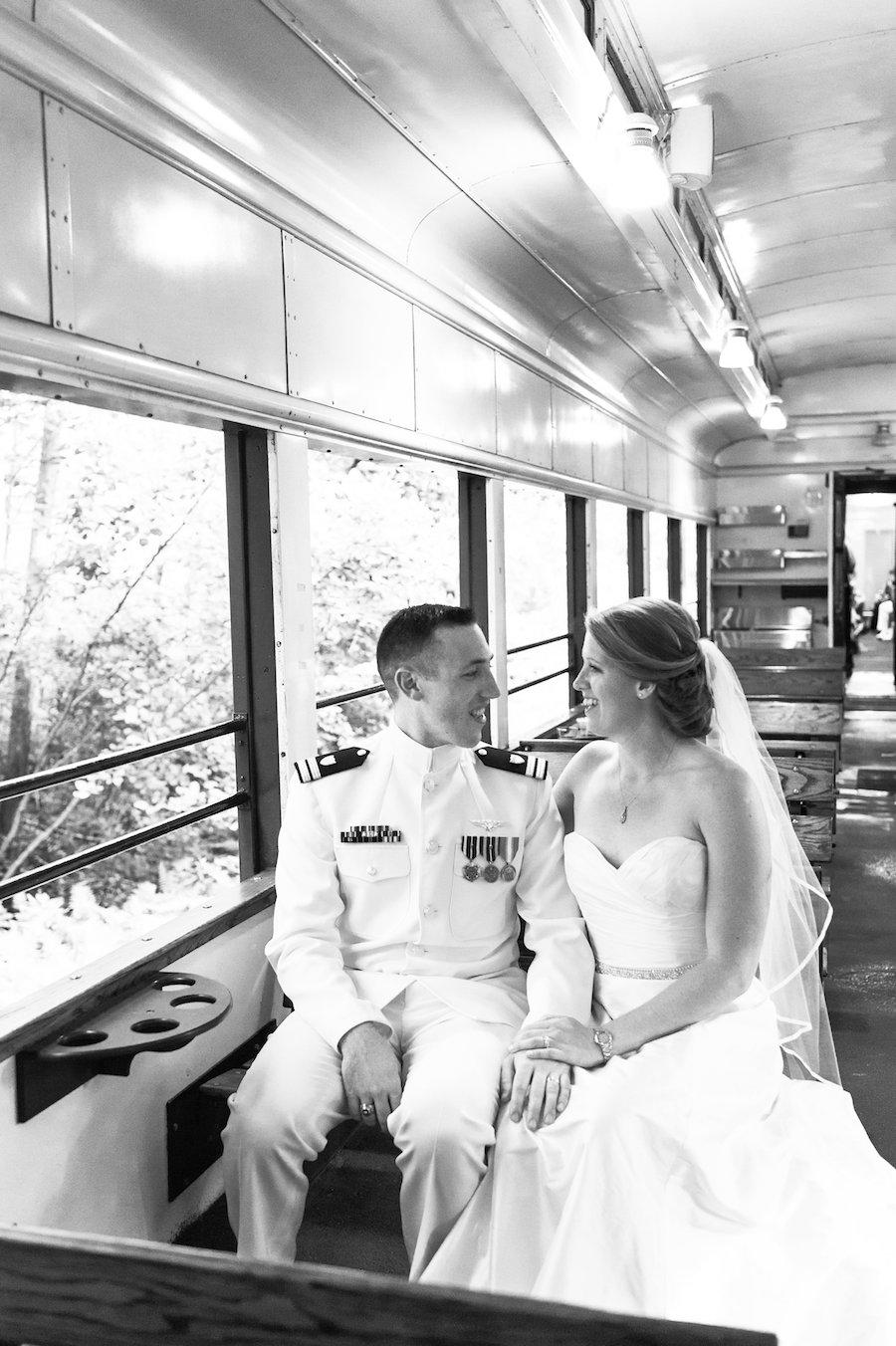 After their ceremony, the couple and their guests hopped aboard the Essex Steam Train to get to their reception. “When Nick’s mom and I went to visit the venue, they were telling us how we could opt to take the steam train up and get off at the Lace Factory,” Michelle says. “I remember telling them ‘We’re probably not going to do that, but that’s cool.’ And then I told Nick and he was like, ‘What! We’re definitely doing that.’ He was all gung ho.” 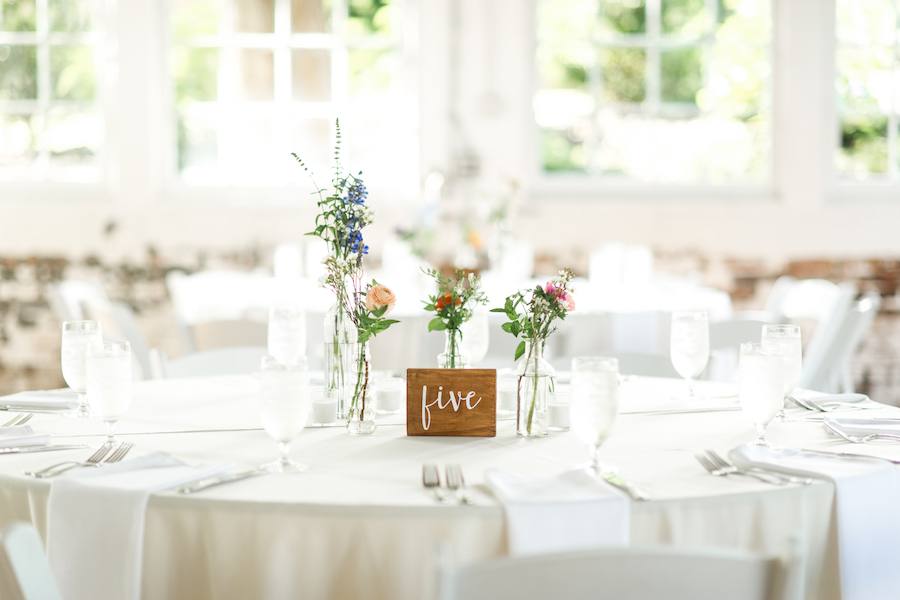 “We didn’t want the centerpieces to be overpowering and I really like every type of flower because I was always in the garden with my grandparents growing up,”Michelle says. “So I was like, ‘I don’t want a specific flower. I just want all the colors and all the flowers!’” 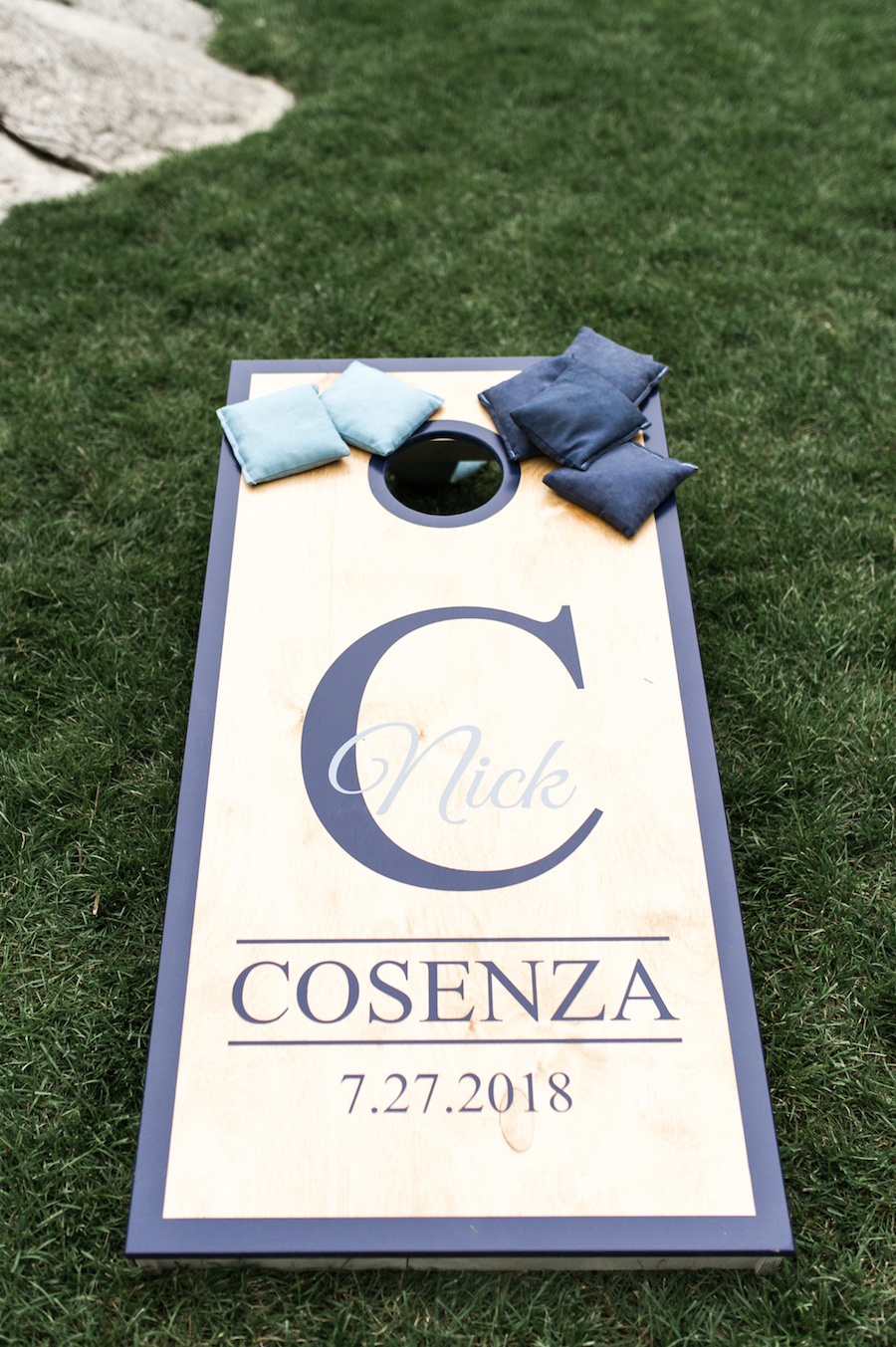 The Lace Factory features a small outdoor space where the couple placed customized corn hole boards from Etsy. “We thought it would be nice to have another option if anyone didn’t want to dance or to give people something to do during cocktail hour,” Michelle says. 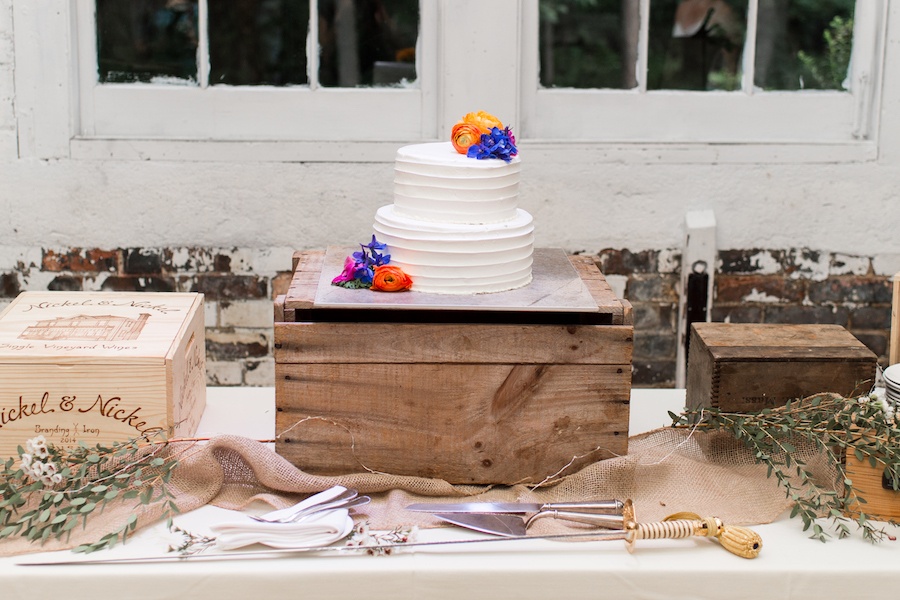 At their reception, the bride and groom cut into a two-tier lemon cake with raspberry filling. “It was summer, so I thought that [flavor] would be really nice and refreshing,” Michelle says. The couple also served mini chocolate cupcakes and mini key lime pies. 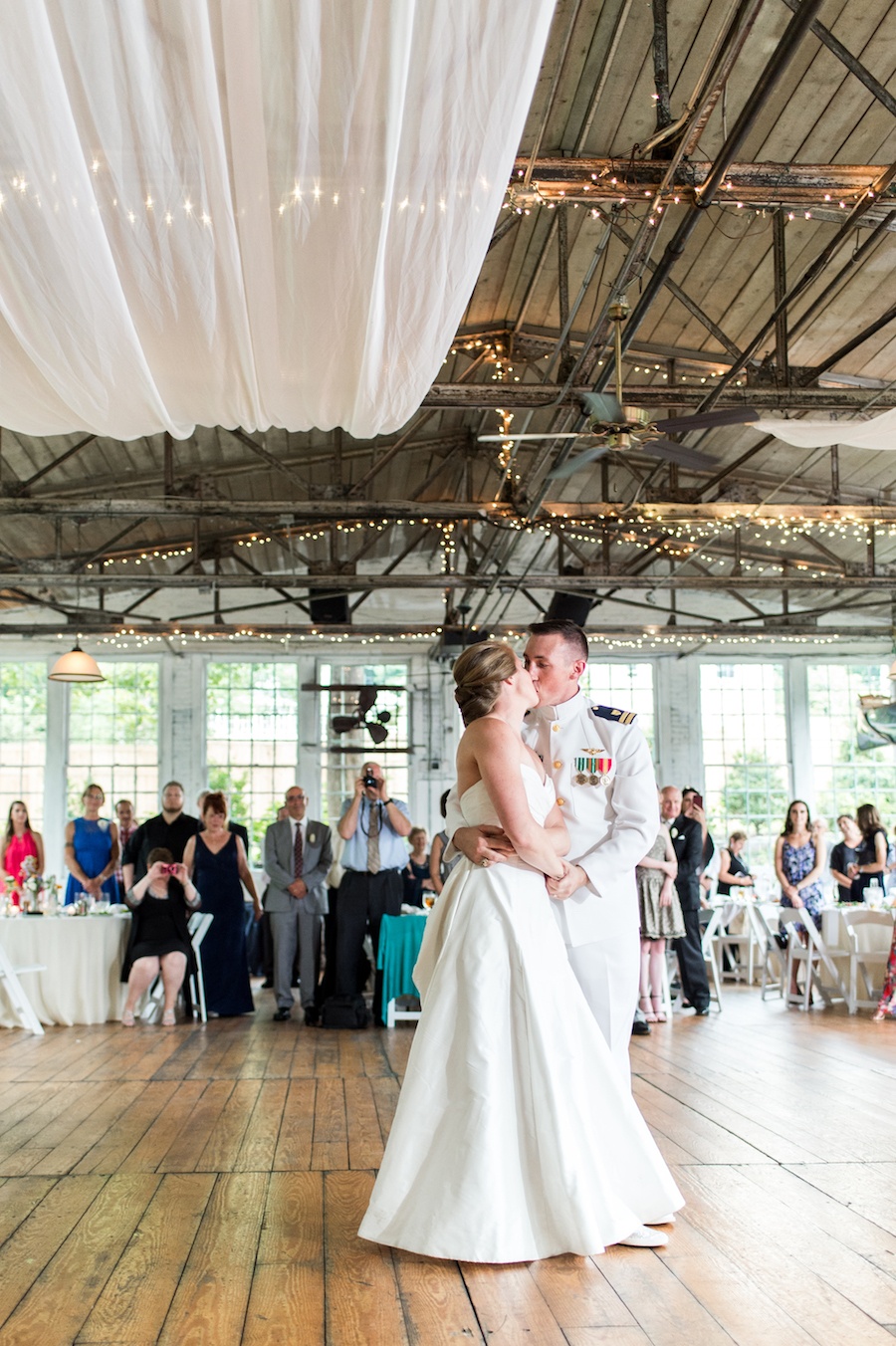 Michelle and Nick had their first dance to “When You Say Nothing at All” by Alison Krauss. “I grew up listening to country music and singing along to that song when I was younger,” Michelle explains.