Their head table featured white candles and a cascading canopy of flowers. 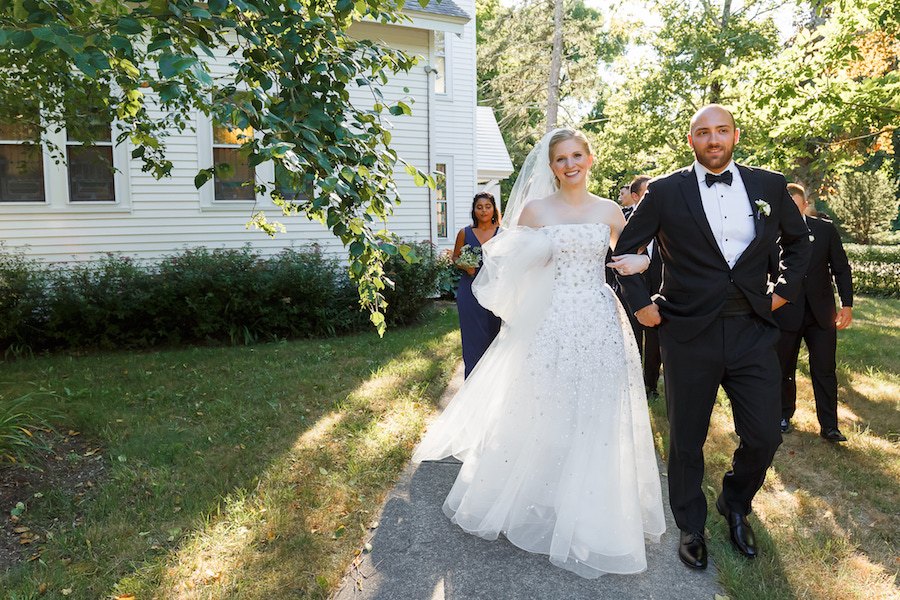 Charlotte Peak and Billy Duncan met during their freshman year at Georgetown University. They were both majoring in physics, but when they met in class, it was all about chemistry. “We became friends and started dating eventually,” Charlotte says. The couple continued their relationship through college and beyond, when they both moved to Washington D.C. “I originally moved in with a roommate, and then about a month and a half later we were both like, ‘No this isn’t going to work,’ and moved in [together],” Charlotte says. “It was the best decision.”

After spending the rest of the holiday basking in the glow of their engagement, the wedding planning began. Because the couple wanted their wedding to have a “small town” feel, Charlotte says, they set out to visit venues in Newport and on Cape Cod. “We both have huge families, so we wanted a location where we would feel like we could walk down the street days before the wedding and see everybody and just feel like everybody was there together,” she adds. When they went to Wequassett on a cold January day, the property’s stunning sightline to Pleasant Bay sealed the deal. “It was just the most spectacular view,” Charlotte says.

For the look of their reception, the couple drew inspiration from A Midsummer Night’s Dream, using deep blue linens, soft lighting, cascading green and white flowers, and touches of moss. “I’ve always thought of the play as very warm and romantic, and I liked the setting in the middle of a forest with twinkling lights,” the bride explains.

Surrounded by 180 loved ones, the couple danced long into the night under gobo lights that casted vine-like shadows. They also made time to take a step back and soak it all in, though. “There was this one moment everybody was dancing, and Billy really wanted to dance, but I was like ‘No, let’s take a second,” the bride says. The couple snuck out through the French doors behind their seats and stood outside watching the dance floor. They closed their eyes and took a deep breath. “We both felt so much love and happiness,” Charlotte says, “We were interrupted within 30 seconds, but it was a really great 30 seconds to stand together.” 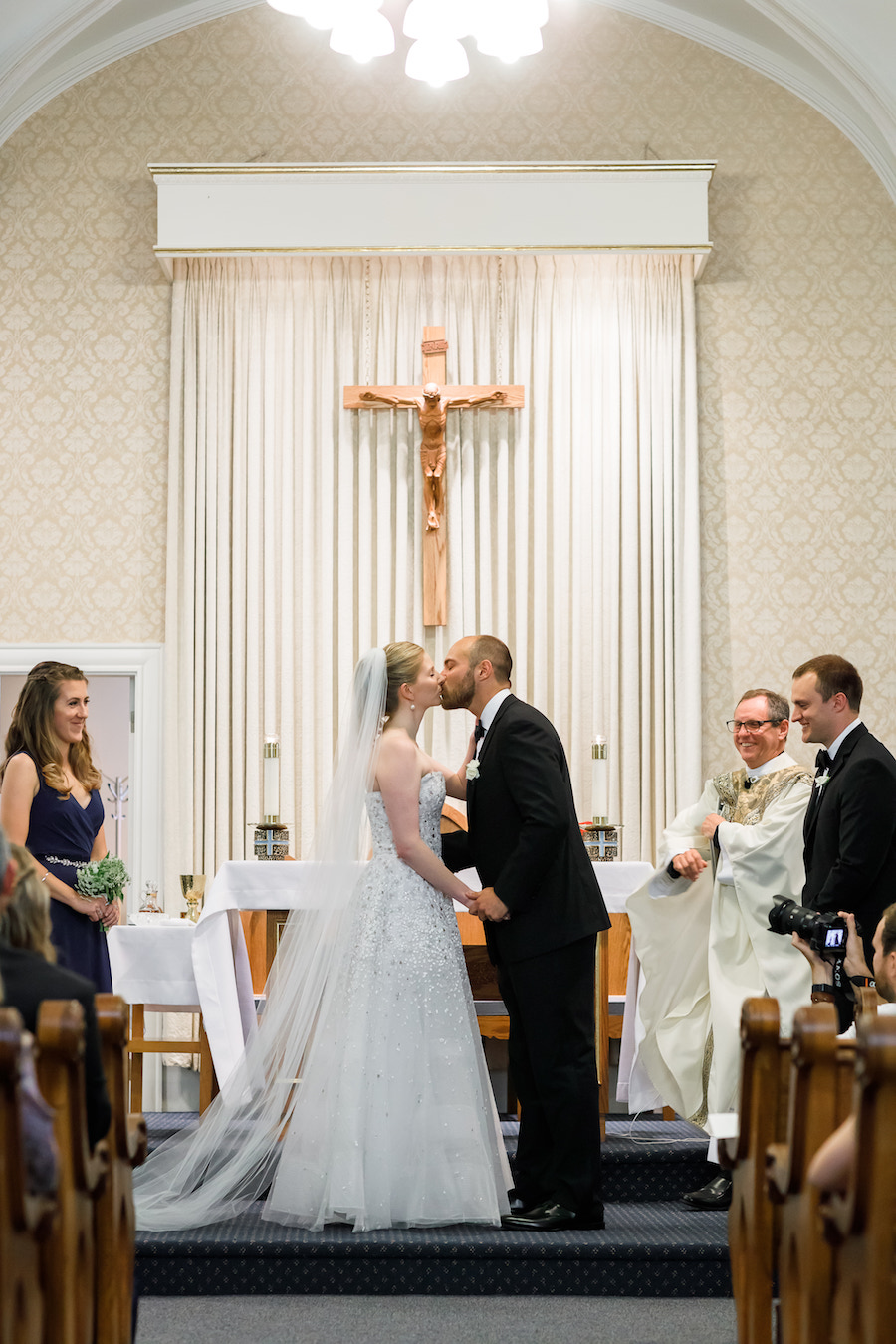 Charlotte and Billy’s ceremony took place at Immaculate Conception Chapel in East Brewster. Father Mark Lane—a friend of Charlotte’s late father, who passed away when she was 10 years
old—officiated the ceremony. “He was my priest when I was a little kid and baptized me, so he got registered in Massachusetts and came and married us,” the bride says. 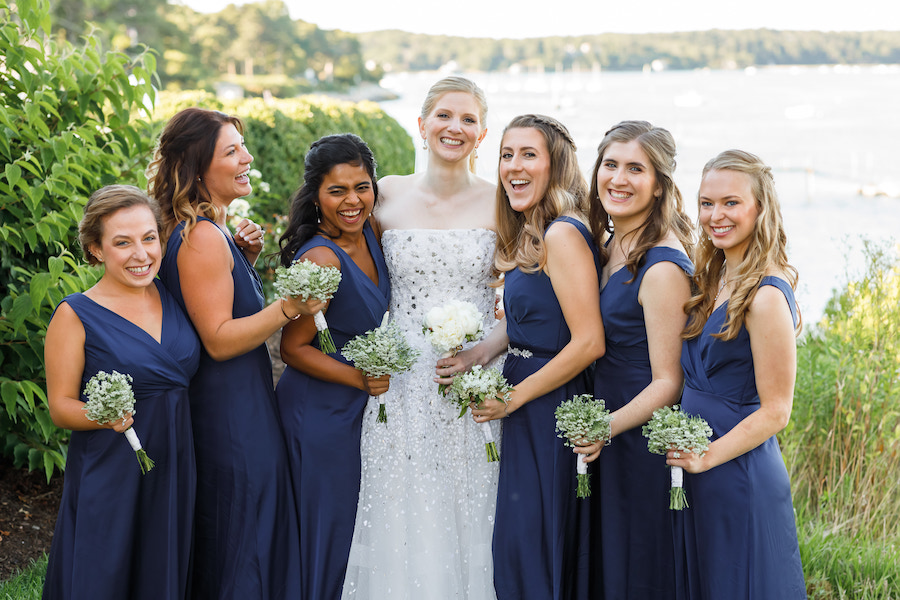 Charlotte wanted her all-white bouquet to be petite and simple, an idea that she says, “was 1,000 percent influenced by the fact that Meghan Markle had a really small bouquet.” 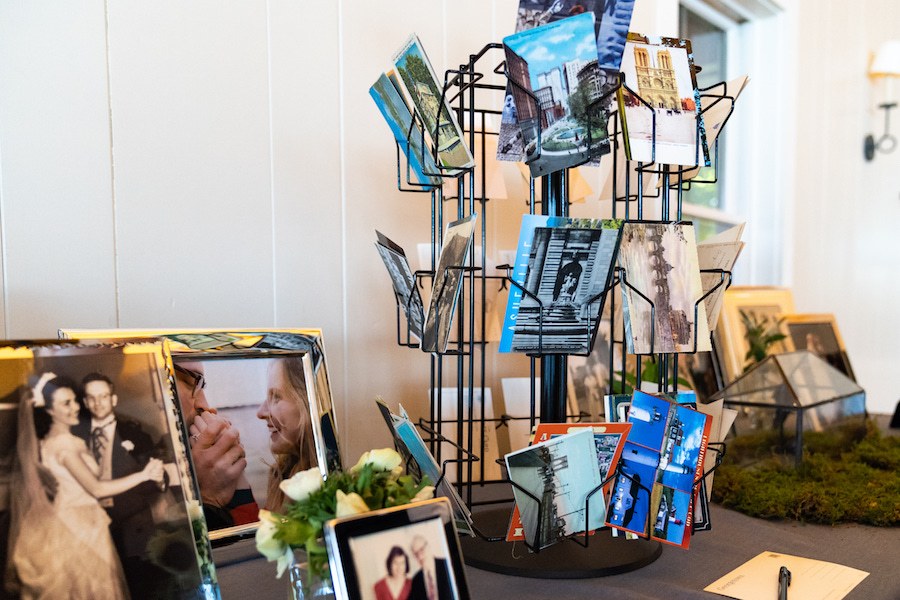 The couple used a table outside their reception to display pictures of their grandparents and parents, as well as a rack of postcards from destinations that they had traveled to together or that were special to them. Billy spent two months sourcing the postcards, which friends and family signed instead of a guestbook, from eBay and vintage shops. 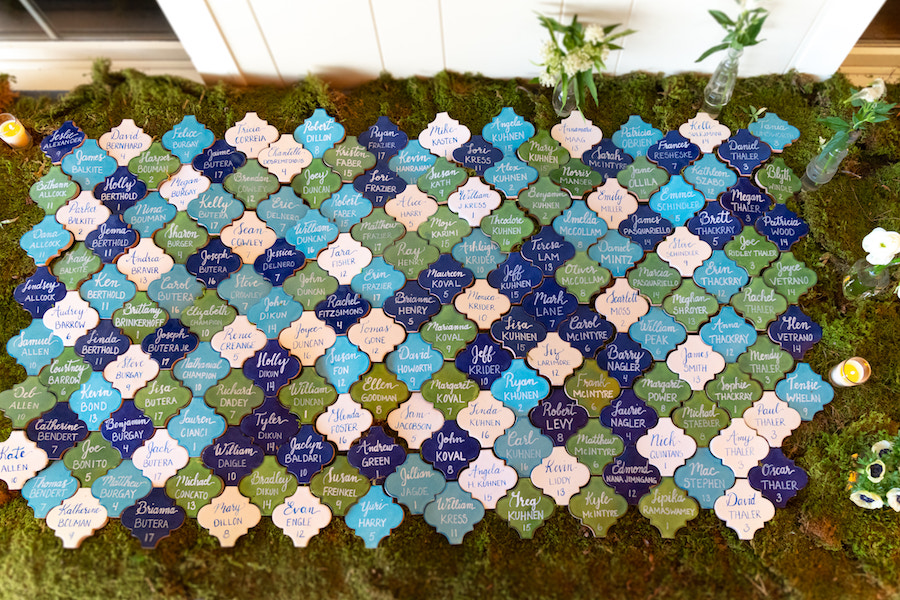 In lieu of traditional escort cards, guests’ names were displayed on colorful tiles, which also served as favors that guests could take home and use as coasters or decorations. 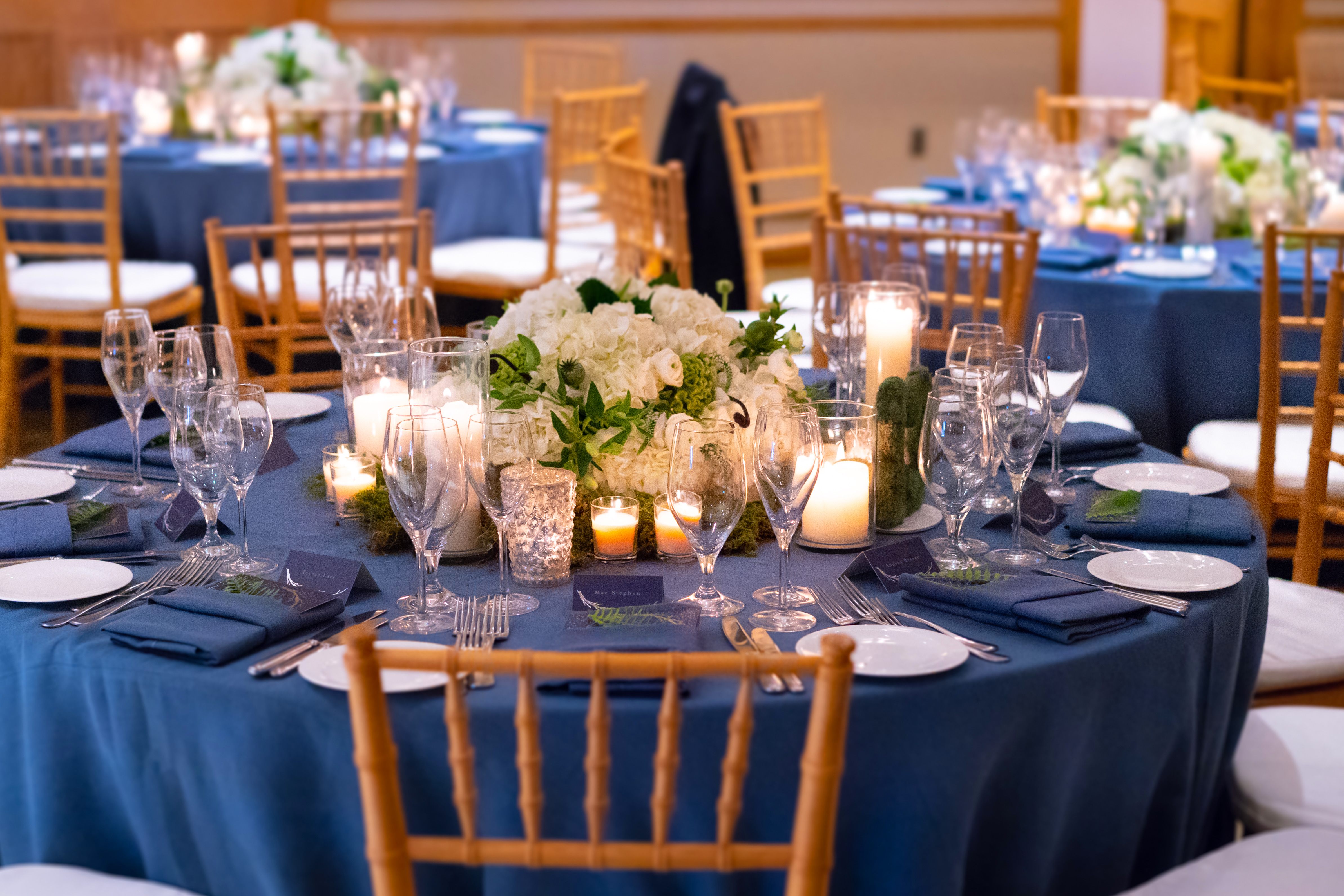 The tablescapes featured low-rising arrangements of hydrangeas and green celosia surrounded by moss. “You know when you go to a wedding and you’re trying to look across the table at somebody and there’s this big bowl of flowers in the way? I really don’t like that, so I had this idea of flowers sort of sprouting from the middle of the table,” Charlotte says. 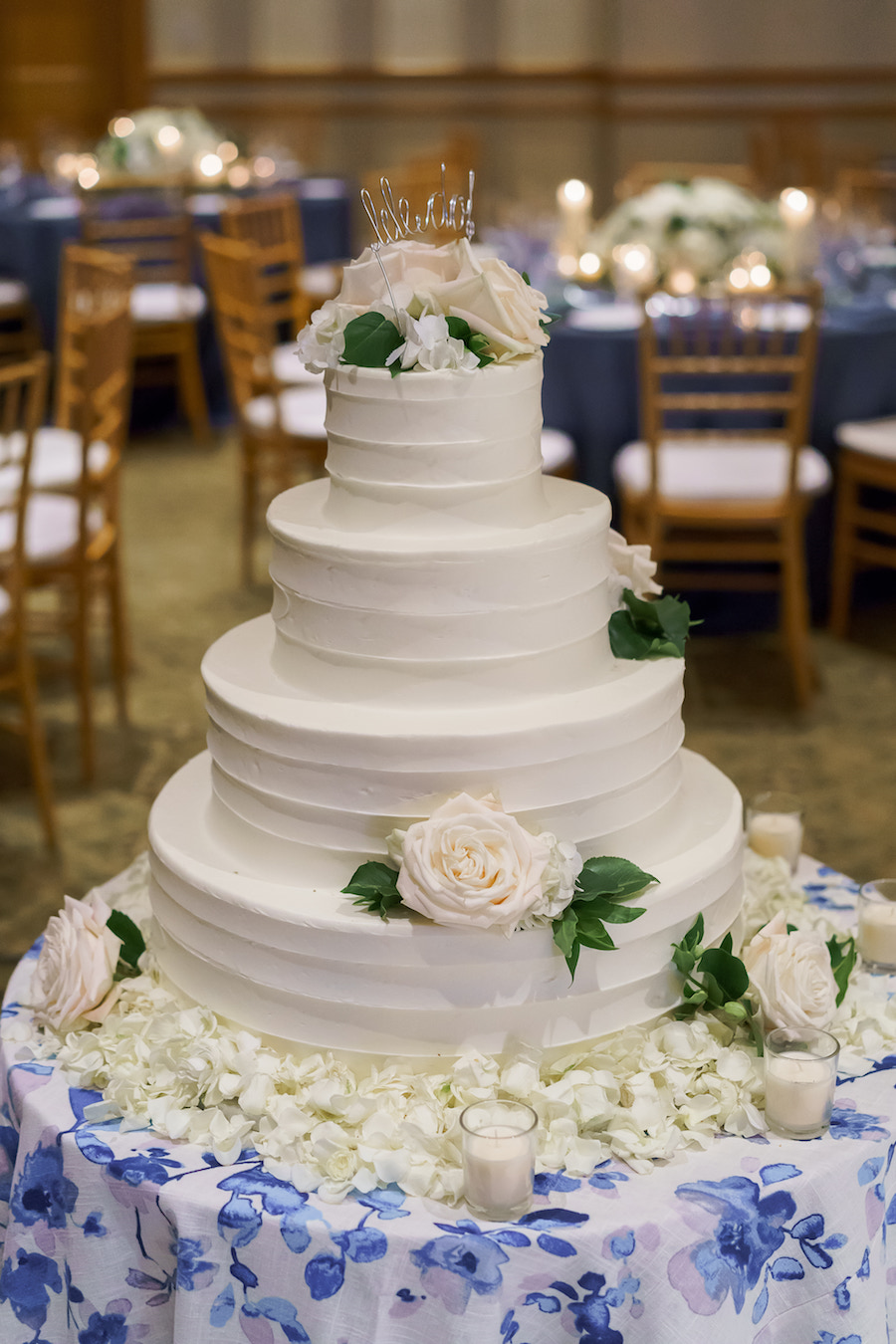 “I think the first thing I said when we got engaged was ‘We’re having a buttercream cake. I’m not messing around with fondant,’” Charlotte says with a laugh. Montilio’s created a buttercream-covered white cake filled with fresh strawberries, white-chocolate buttercream, and St. Germain. For their top tier the couple opted for an almond cake, which they ate themselves. 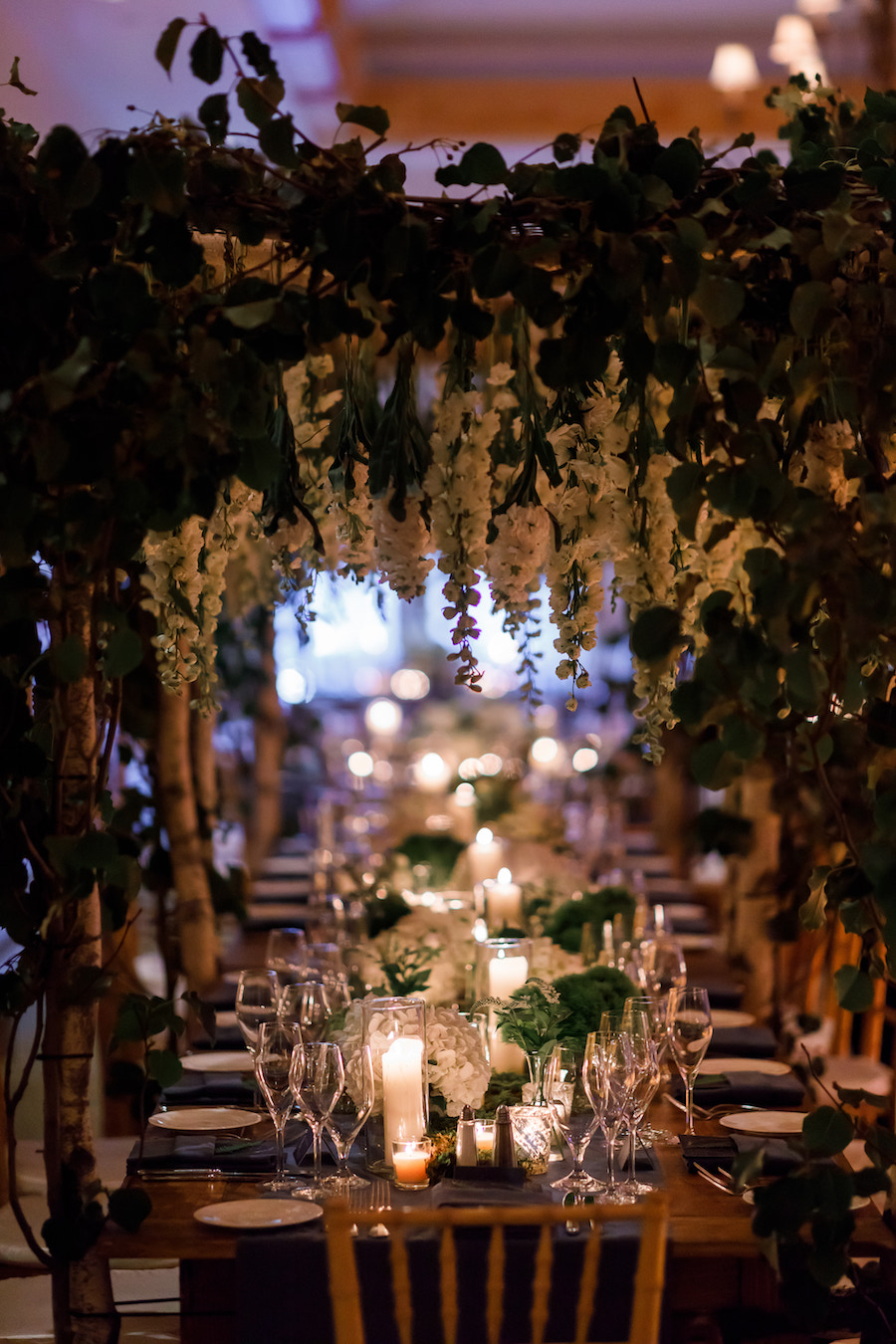 For the bride and groom’s long head table, Lilacs designed a canopy made out of white birch, pear branches, cascading delphiniums, and stock.
“There were flowers falling down and all these different pops of greenery and then the gobo [lights] mirrored the vines,” Charlotte says. “It was so cool.” 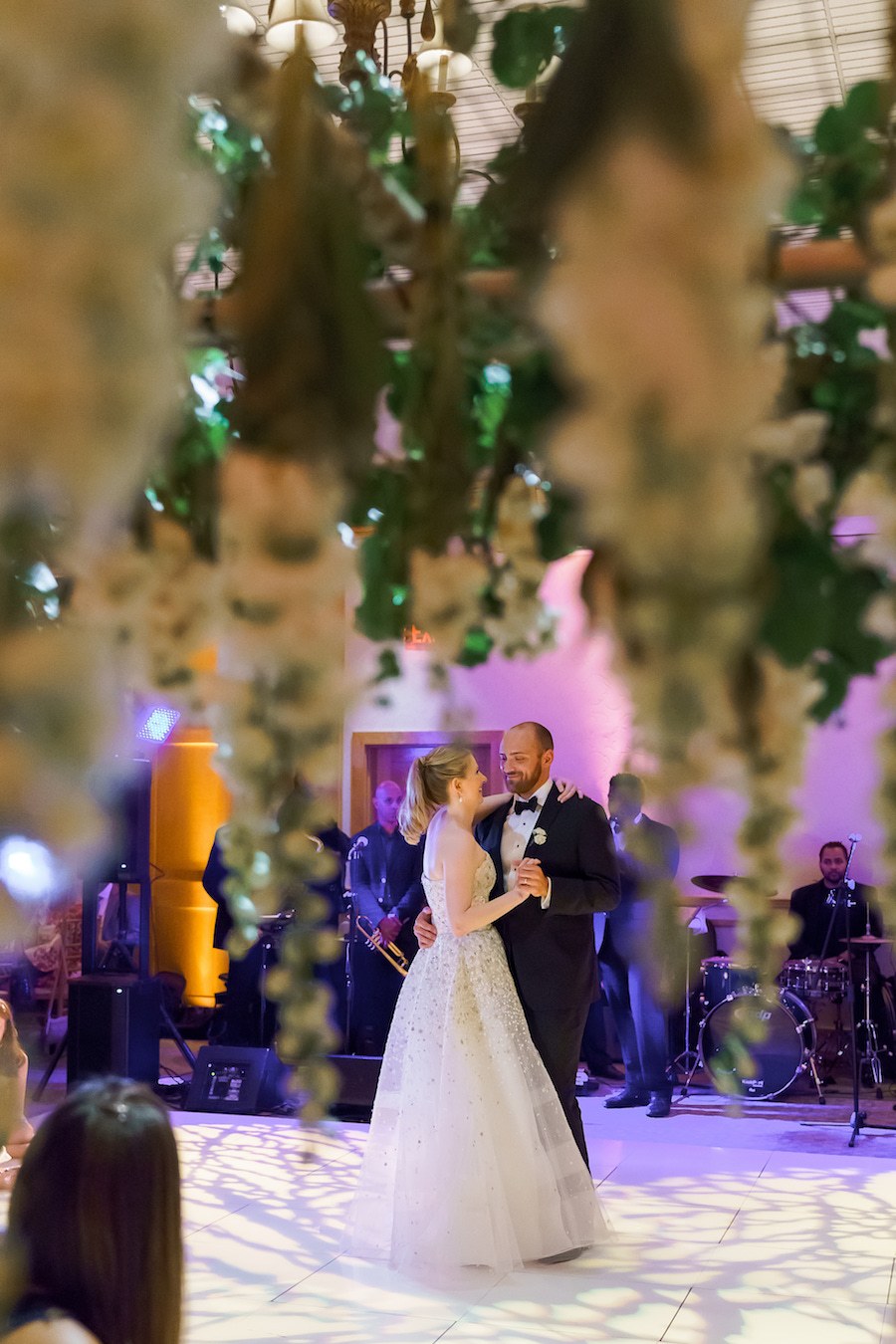 Charlotte and Billy had their first dance to Billy Joel’s “She’s Got a Way,” which is the groom’s favorite song. “It was really nice to have that song, and like clockwork, it made Billy cry,” Charlotte says.