This Couple’s Hildene Wedding Was All about Natural Glamour

Their celebration also featured sweet nods to their beloved grandparents. 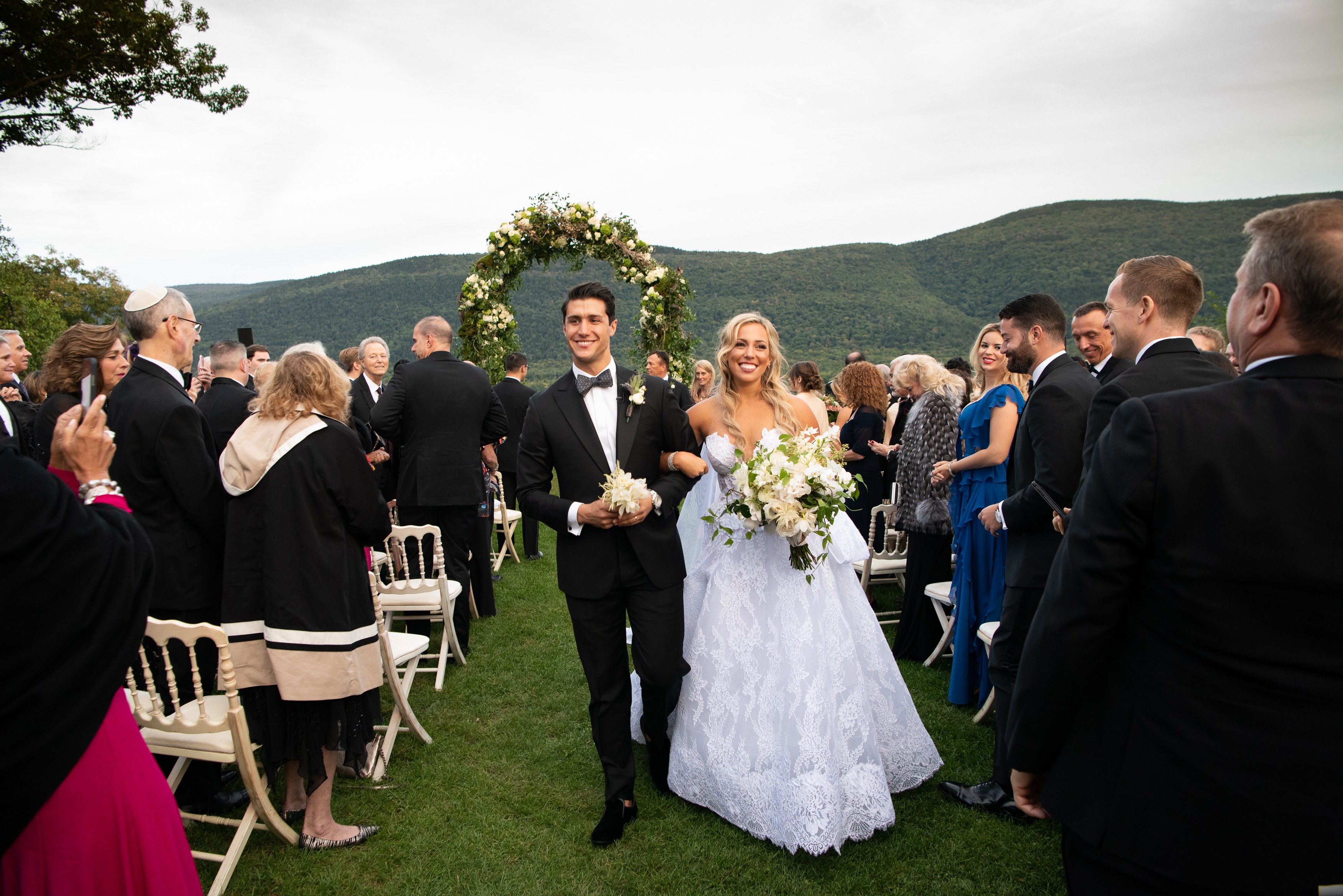 Brigitte Laukien was a senior at Wellesley College when she met Zachary Kofos while on spring break in the Dominican Republic. “We got into the same taxi, and that was kind of where it all started,” Brigitte recalls. They quickly found out that they were both history majors from Massachusetts, and had grown up about 30 minutes away from each other. They even had mutual friends. “We ended up talking all night,” Brigitte says. “We liked each other a lot, but I didn’t know we would ever date or get married.” Once they returned home, they were friends for about six months before they started dating on August 8, 2014.

Exactly three years, two dogs, and one Beacon Hill apartment later, the couple was off on a trip to Cape Cod. Zachary brought Brigitte to the beach that she and her family had often visited when she was a child and set up a blanket with wine and a tasty meal. Throughout their relationship, Brigitte would ask Zachary to tell her a story whenever she was bored. “He pretty much never does,” Brigitte says with a laugh. On this day though, he pulled out and read aloud a personalized book that he’d had made about their love story. On the last page, the words “The End” were crossed out, and the phrase “The Beginning” had been added. Brigitte said “yes” to the proposal, although she’d already “started crying probably halfway through,” she recalls. Getting engaged on Cape Cod was particularly special for Brigitte because her grandmother, who was terminally ill, lived there. So, as soon as the news was official, they drove to her grandparents’ house. “I’ll always have that memory,” the bride says.

When the pair began planning, they had three must-haves. First, they wanted a venue with beautiful outdoor scenery, but also an estate feel. They visited locations around New England, and eventually found exactly what they were looking for at Hildene, the former summer home of Abraham Lincoln’s son. The 412-acre property in Manchester, Vermont features panoramic views of the Taconic and Green Mountains, as well as gardens and a working farm. “It was this stately house in the middle of the mountains, and the views were just totally breathtaking,” Brigitte says. Secondly, they wanted a ceremony that would blend their Jewish and Greek Orthodox cultures. “Turns out, that’s a difficult thing to put together unless you have the right people helping out with it,” the bride says. They found that in Rabbi Mark Newton, an Irish rabbi who was able to incorporate both of their traditions. Lastly, the bride and groom wanted a fun reception with killer music–which is exactly what they got from Nightshift Entertainment. “People still tell me how great the band was,” Brigitte says. In fact, the couple’s 150 guests were having such a blast on the dance floor that Brigitte and Zachary decided to scrap a few of the speeches they’d planned for the evening. “People were dancing until we were basically kicked off the property,” the bride recalls. “As the buses were ready to go, people were still on the dance floor.” 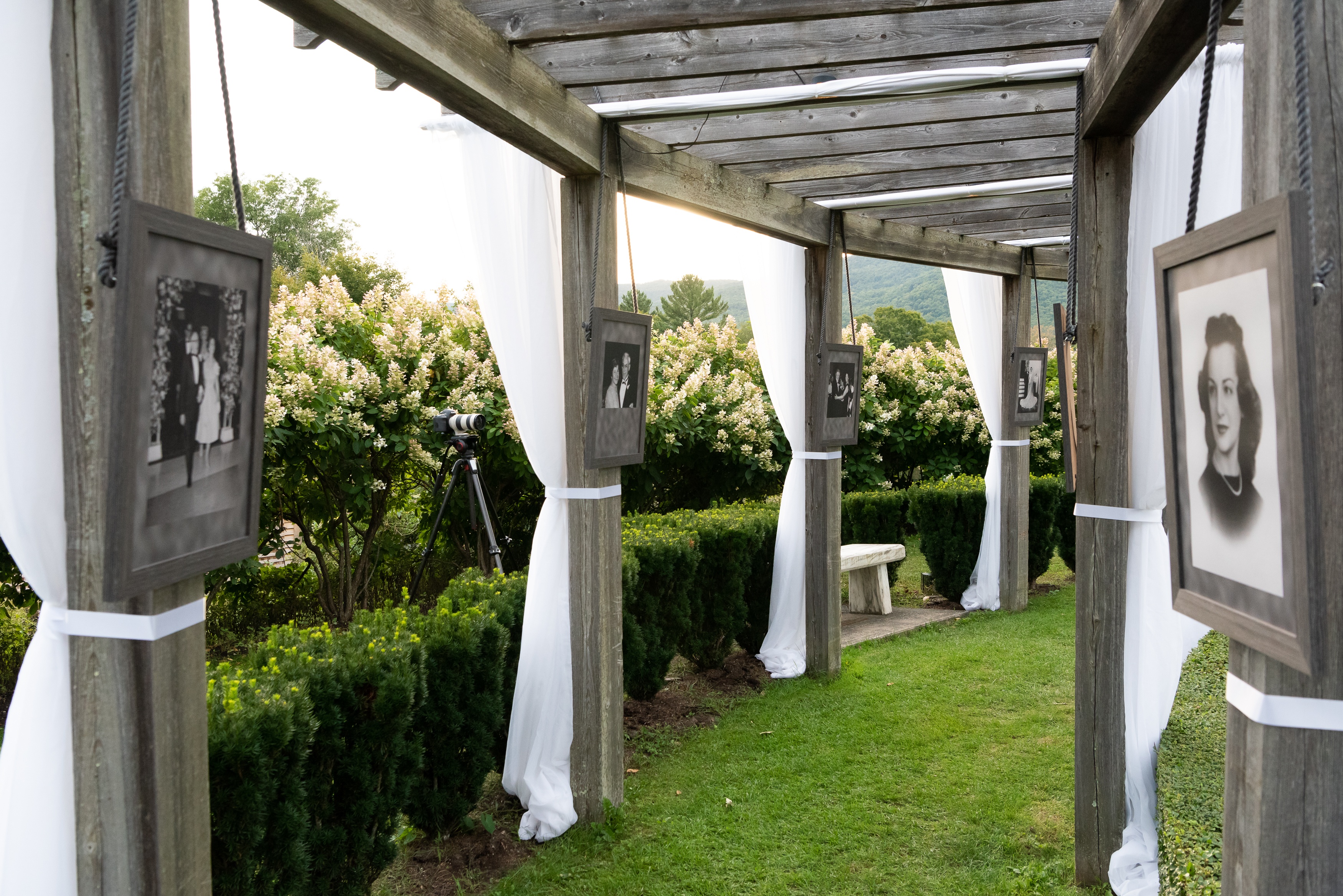 Brigitte’s grandmother passed away about six months before their wedding, and Zachary’s grandmother had passed away about six months before that, so it was important to the couple to feel their grandmothers’ presence on their wedding day. To achieve this, planner Marc Hall enlarged black-and-white photos of the couple’s grandparents and great-grandparents and hung them along the path that Brigitte walked to the ceremony. “I got to see my grandparents who I wouldn’t have otherwise been able to see that day, and that was amazing,” Brigitte says. 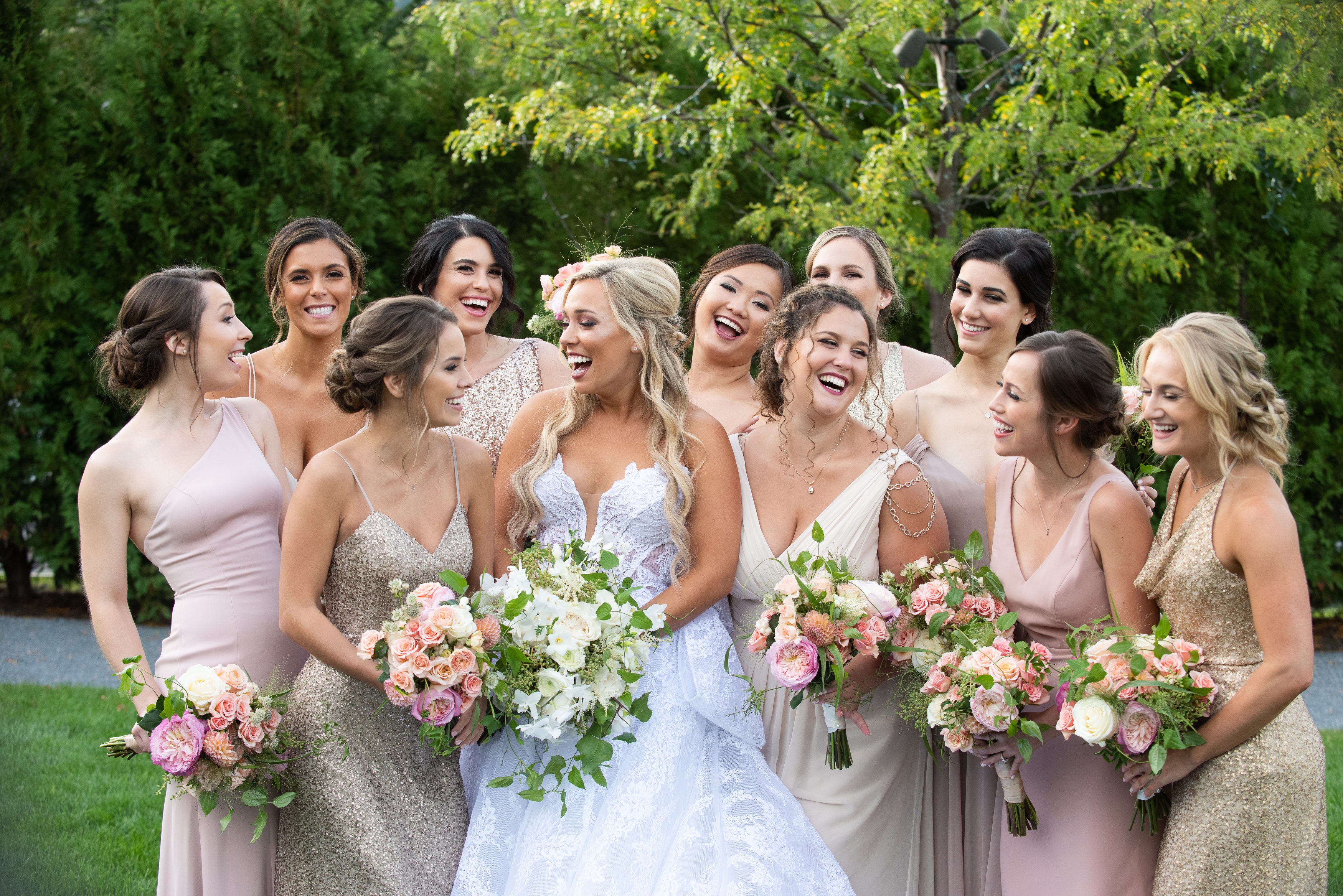 Wearing blush and gold dresses they selected themselves, Brigitte’s bridesmaids carried matching pink bouquets that the bride says she chose because they were both beautiful and a bit “wild” like the venue. 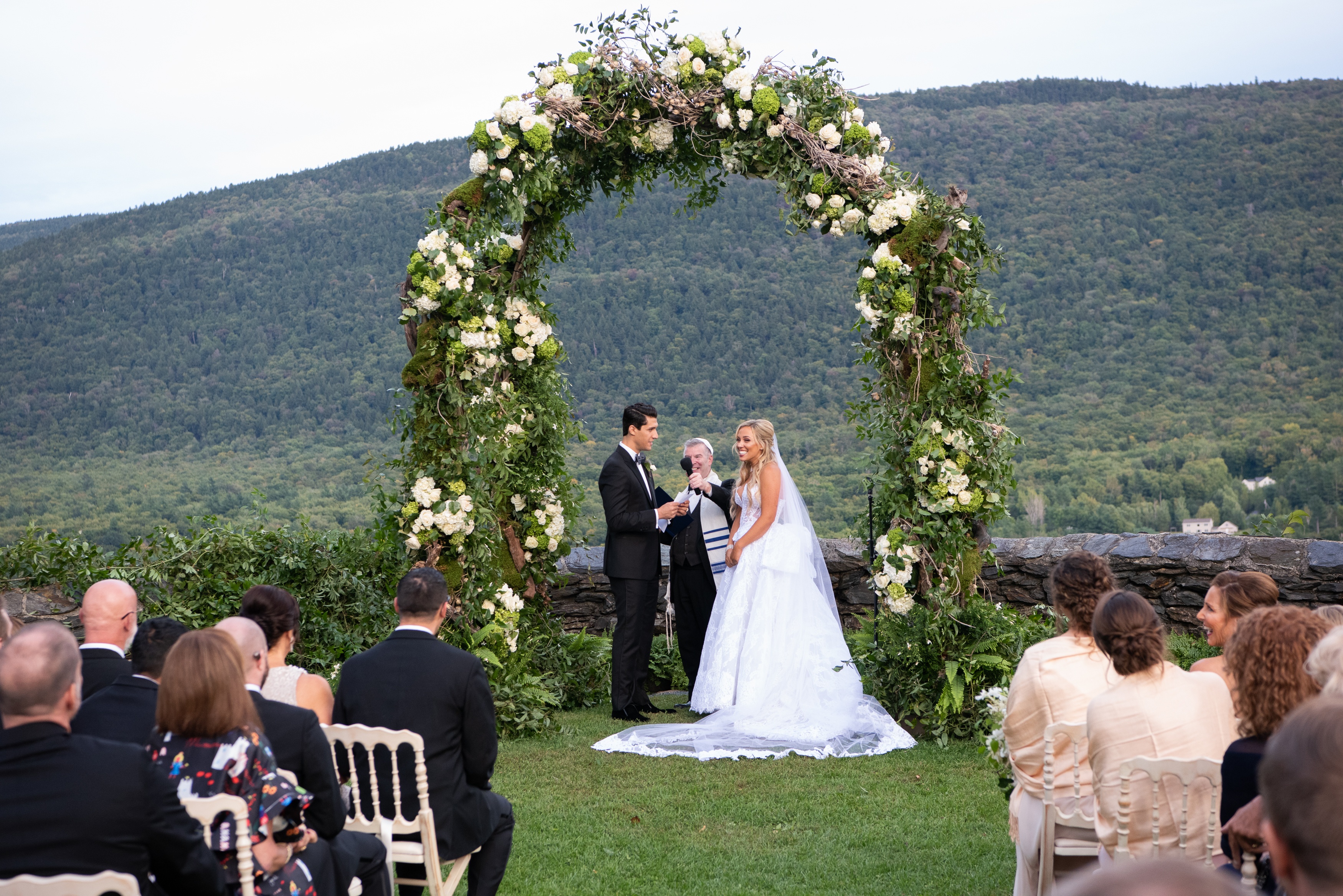 Brigitte’s favorite moment of the day? Zachary’s vows. “They were so much better than mine,” she says. “He was so funny and genuine and authentic.” 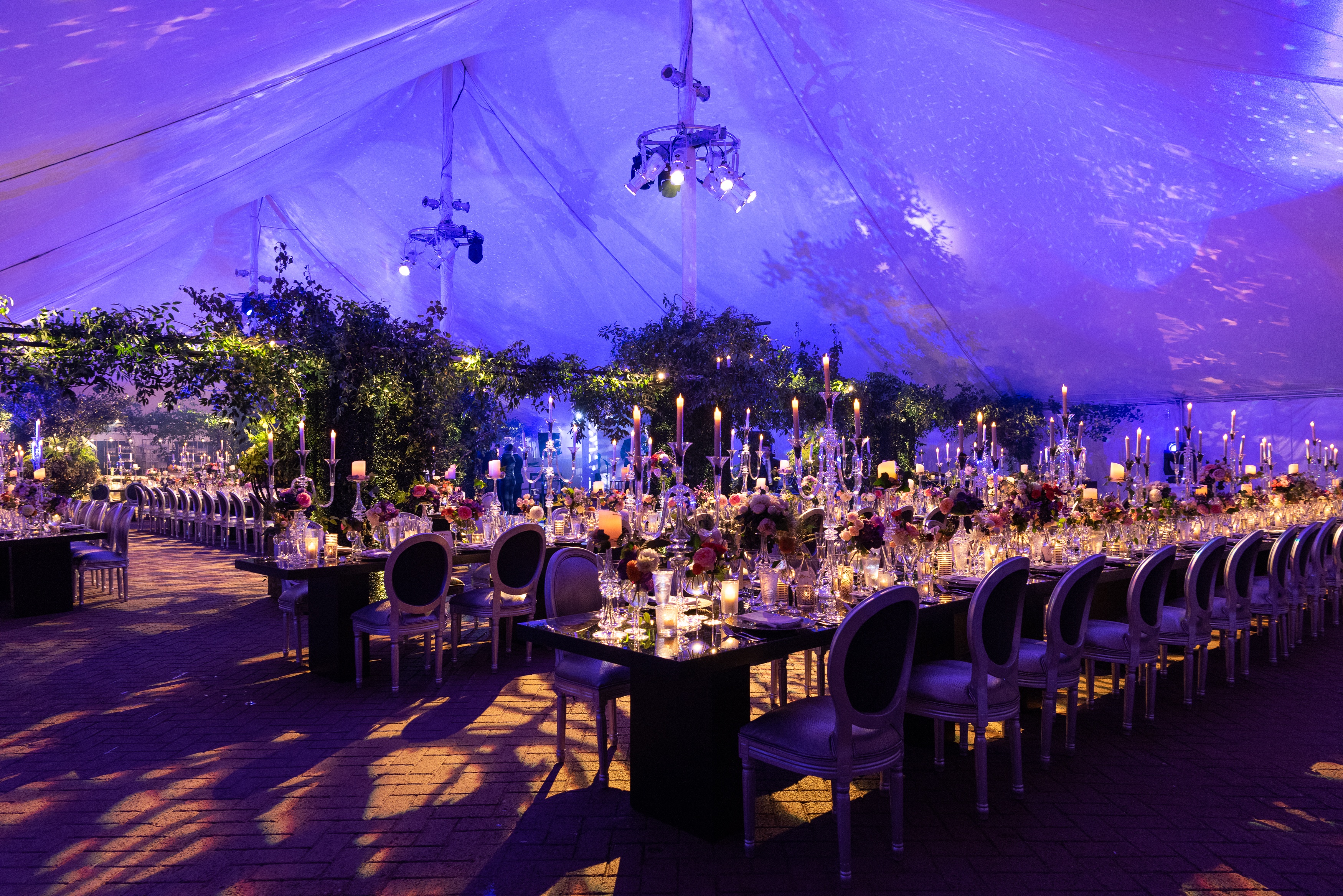 “We really wanted to have something that would be glamorous and organic at the same time,” Brigitte says of the tented reception. The couple also opted for long rectangular tables because they wanted their celebration, which took place on the first day of fall, to feel “like a gathering or feast,” the bride explains. 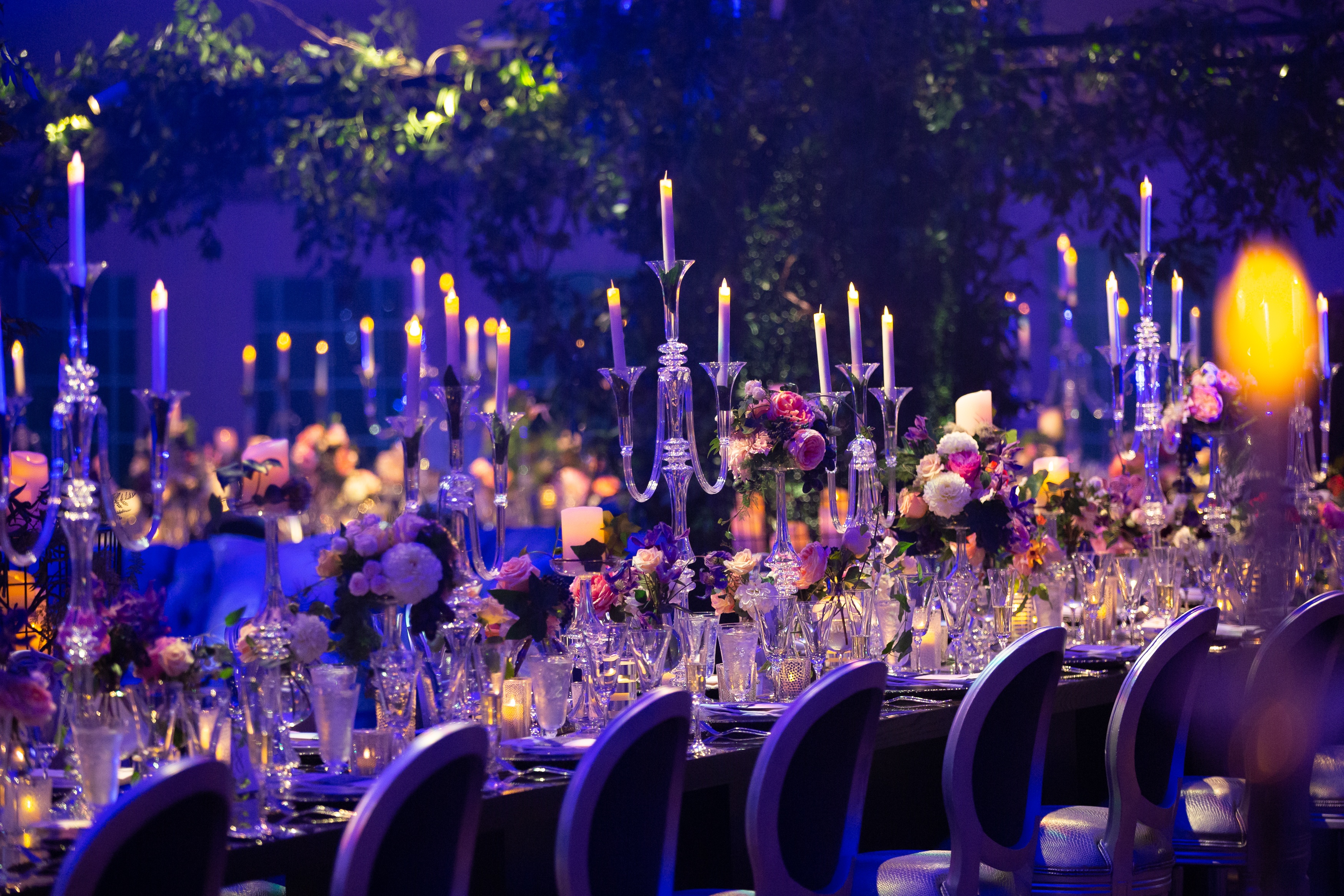 The couple wanted their tablescapes to feature plenty of florals, but also feel a bit “earthy,” the bride says. They dressed up their the tables with café au lait dahlia’s, magic black vanda orchids, chocolate cosmos, moonstone roses, and other flowers, dotted with tall candelabras. 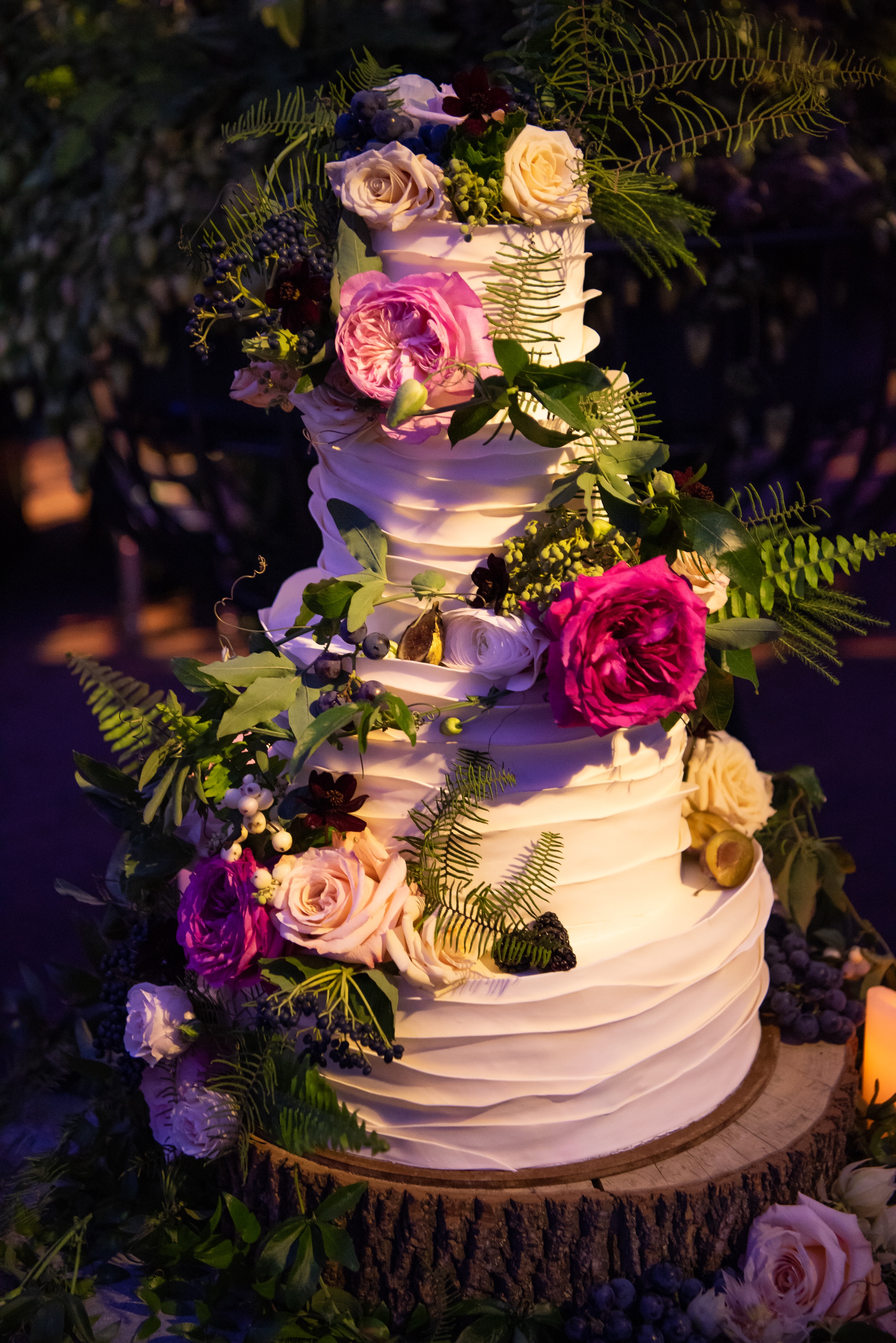 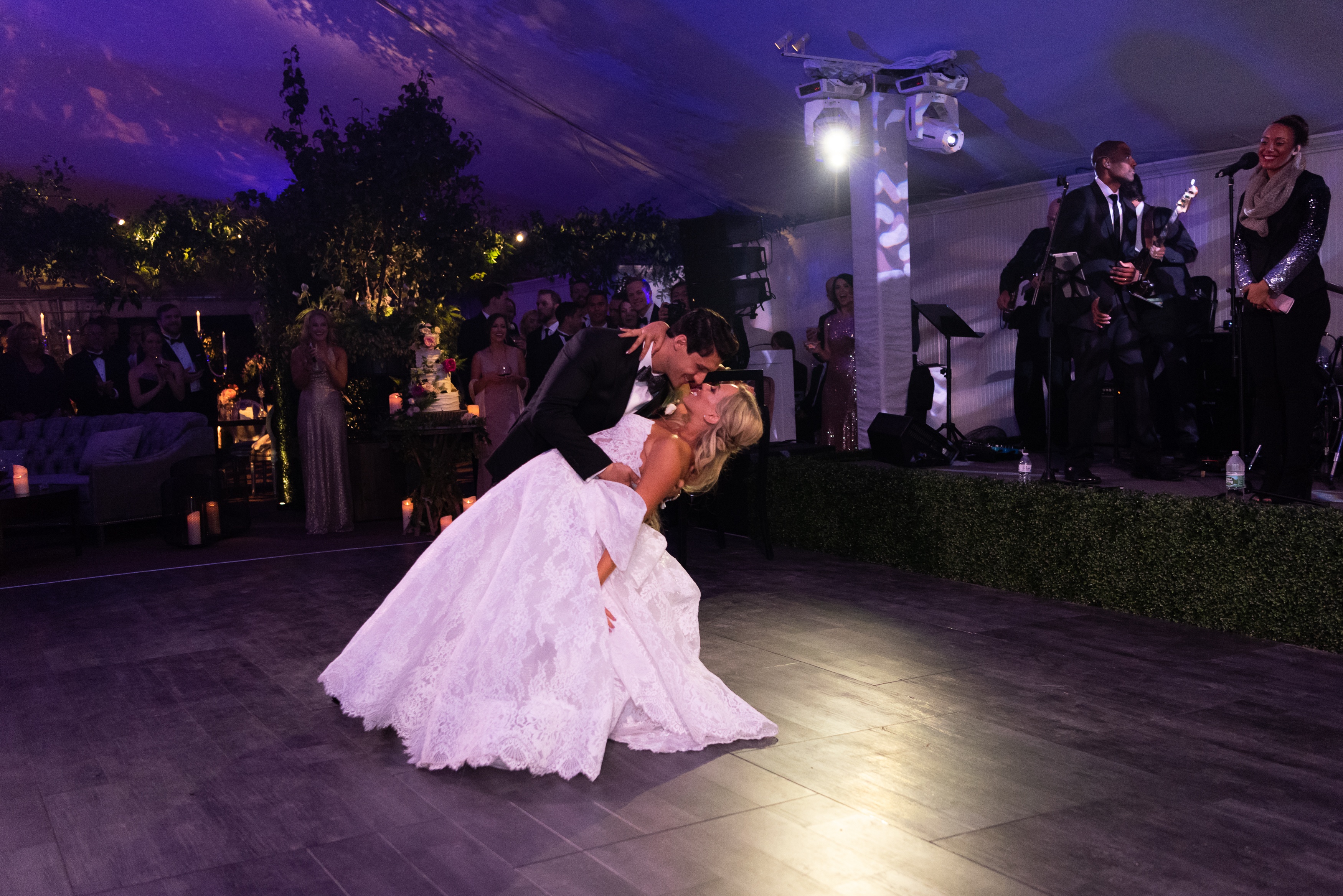 Brigitte and Zachary had their first dance to Louis Armstrong’s version of “La Vie en Rose,” which they chose because it was one of Brigitte’s grandmothers’ favorites, and her other grandmother’s name was Rose.