This Jewel-Toned Hotel Commonwealth Wedding Brought All the Drama 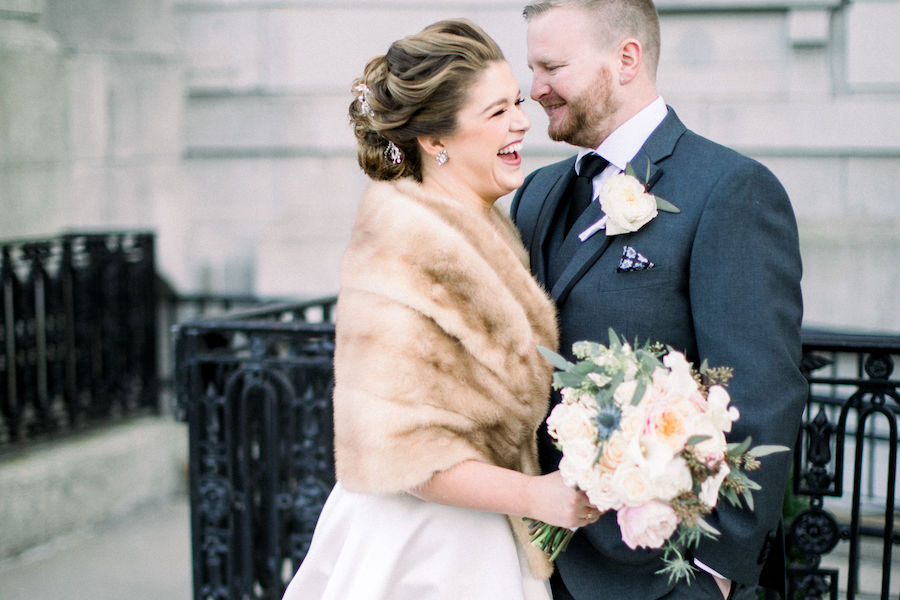 In 2015, Collin Florence was a technician at WCVB Boston with a reputation for an indifference toward interns. One day, a news truck broke down in the field, and Collin brought it to get repaired. Tricia Tiedt was the intern tasked with calling a cab to pick him up at the repair shop, but she accidentally sent it to the wrong address. “So I sat there for like, three hours waiting and eventually I just walked back. I walked in like, ‘I’m going to figure out who did this and give them a piece of my mind,’” Collin says. But then,”I walked into the building and found out who it was. For the first time I really noticed her and knew her name,” he recalls. “I just turned around, walked back out, and didn’t say a peep.” Collin and Tricia both spent the next few weeks trying to run into each other in the parking lot before and after work. One evening, Tricia knew that Collin would be coming back late from a shoot, so she purposely stayed after work hoping to bump into him. She did, and he asked her to grab a drink at the Biltmore Bar & Grill, in Newton. “We literally went out that night and have been together ever since,” Tricia says.

A little over two years later, right before Christmas, Tricia’s best friend Laura came over to her apartment and put her in a limo outside. “I knew what was happening as soon as I saw the limo,” Tricia says. The driver took her back to the Biltmore, which Collin had rented out. One of WCVB’s photographers met her at the door and, when Tricia walked into the restaurant, she saw Collin standing near a private table with a guitarist who was playing Ed Sheeran’s “Thinking Out Loud.” The couple danced before Collin got down on one knee. “He opened the ring box and said nothing. He planned this big elaborate proposal and then when it came time to ask me to marry him, he didn’t,” Tricia laughs. “I thought under the circumstances it was implied,” Collin says.

Shortly after they got engaged the couple began visiting venues and only saw two other spots before they landed on the Hotel Commonwealth. “We really wanted to be [in the city] and there’s the [proximity] to Fenway Park, which is so iconic,” Collin says. “It just seemed like a no brainer.” Once Tricia and Collin started planning, they tasked creative director Kate Malloy, of Malloy Events, with bringing to life an elegant affair with a dose of drama. Malloy delivered, incorporating florals and décor in soft jewel tones for the ceremony, richer colors for the reception, plus luxe velvet linens and rentals. “Kate called the entire night a ‘color journey,’” Tricia says. The highlight of the night for the couple, though, was the dancing. “When [Ripcord] finally opened, it was like the dance floor exploded. Every single person got up,” the bride says, “It so was fabulous to the point that people were begging the band to keep going when it was time to end.” 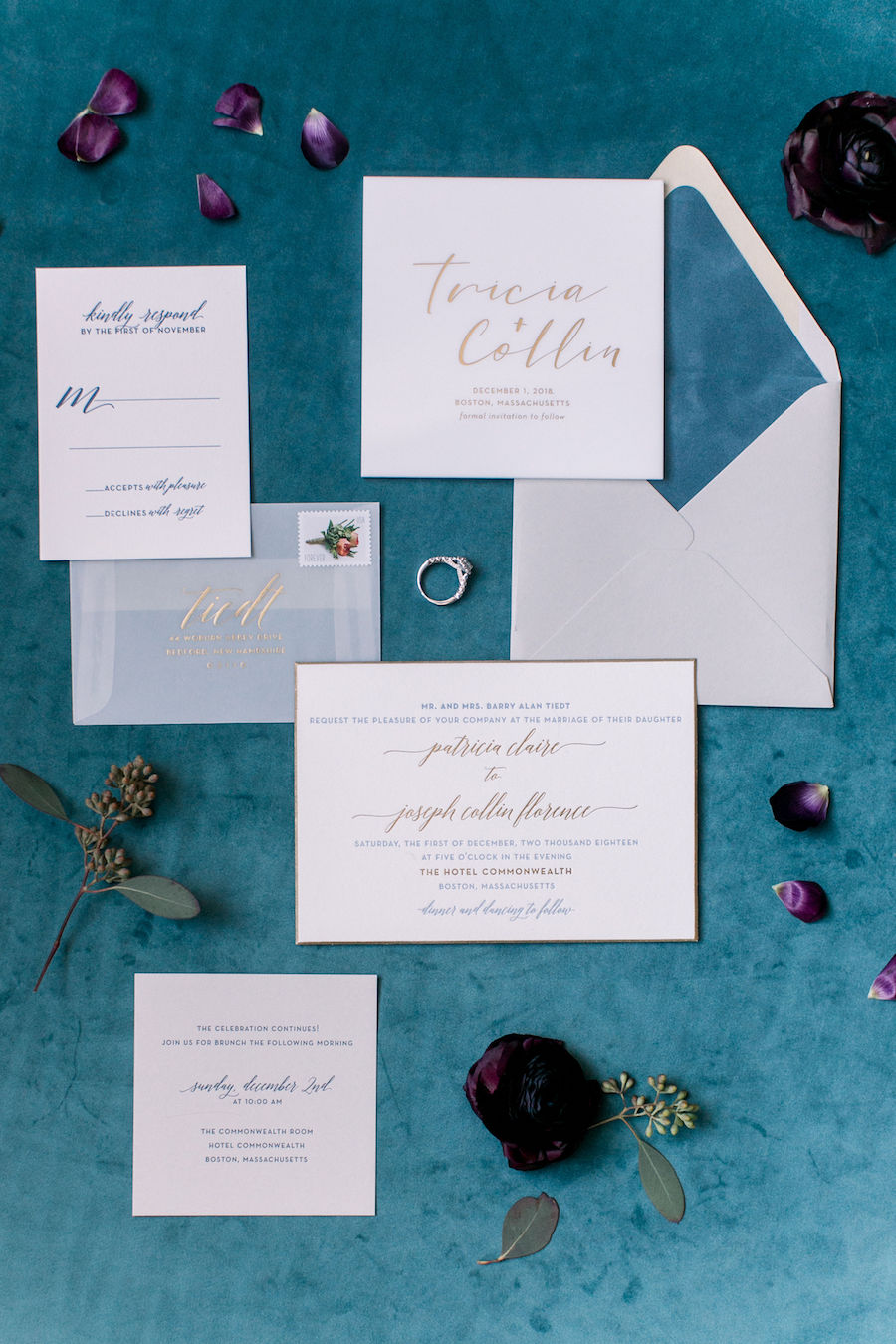 The couple’s invitation suite featured an envelope with a teal velvet lining—a preview of  the color palette at their reception. 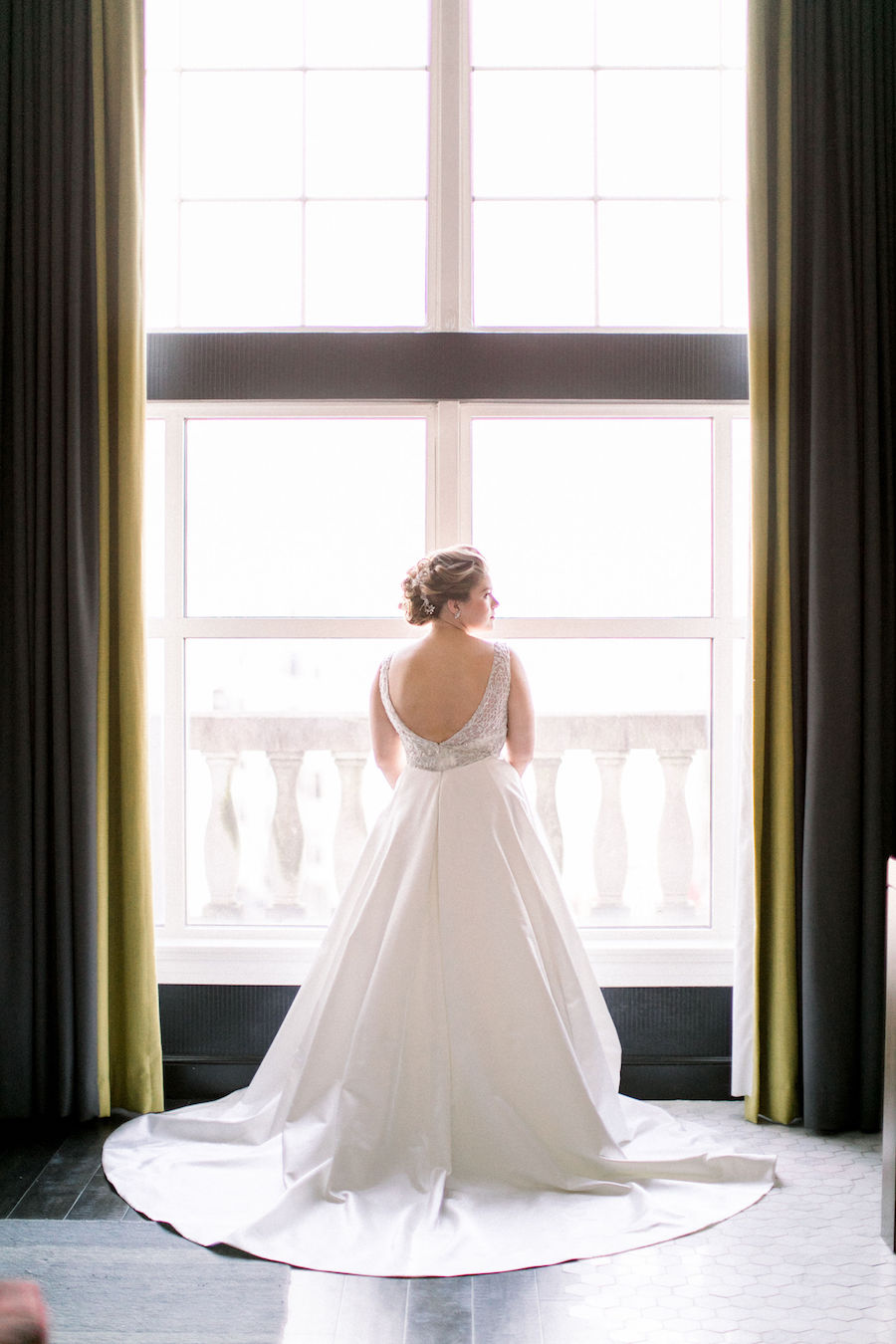 Tricia made only one bridal appointment and found her Lazaro gown at Madeleine’s Daughter in Portsmouth, New Hampshire. “It was the fifth or sixth dress I tried on and I hadn’t even liked it when I saw it online,” the bride says. When she fell in love with the dress at the store, however, she ordered it custom and raised the neckline four and a half inches. “Everyone said ‘It just looks so much like you.’ And I felt like it was a very ‘Tricia’ dress,” she adds. 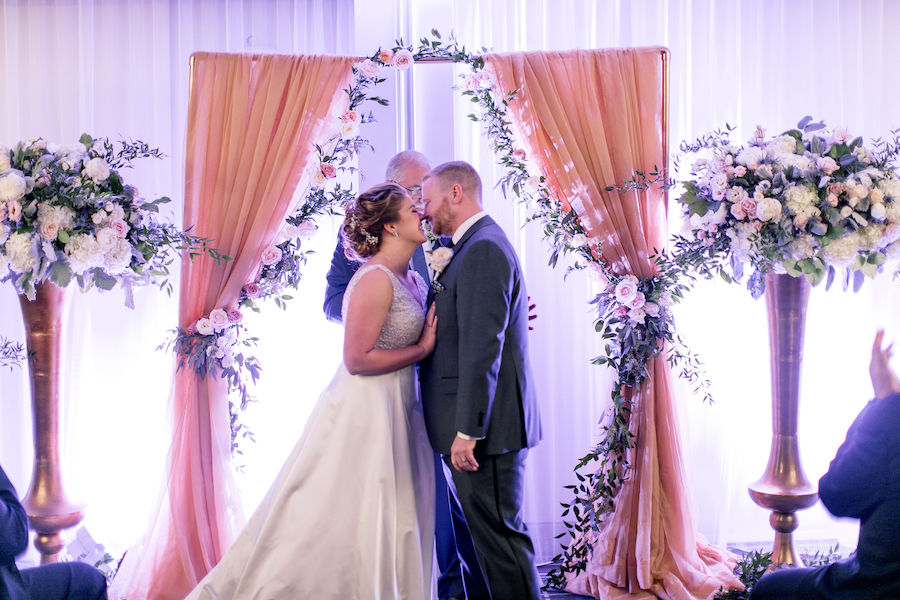 Sheer drapery and a garland of seeded eucalyptus, peonies, and roses adorned Tricia and Collin’s ceremony arbor, which was also framed by two statuesque gold urns. 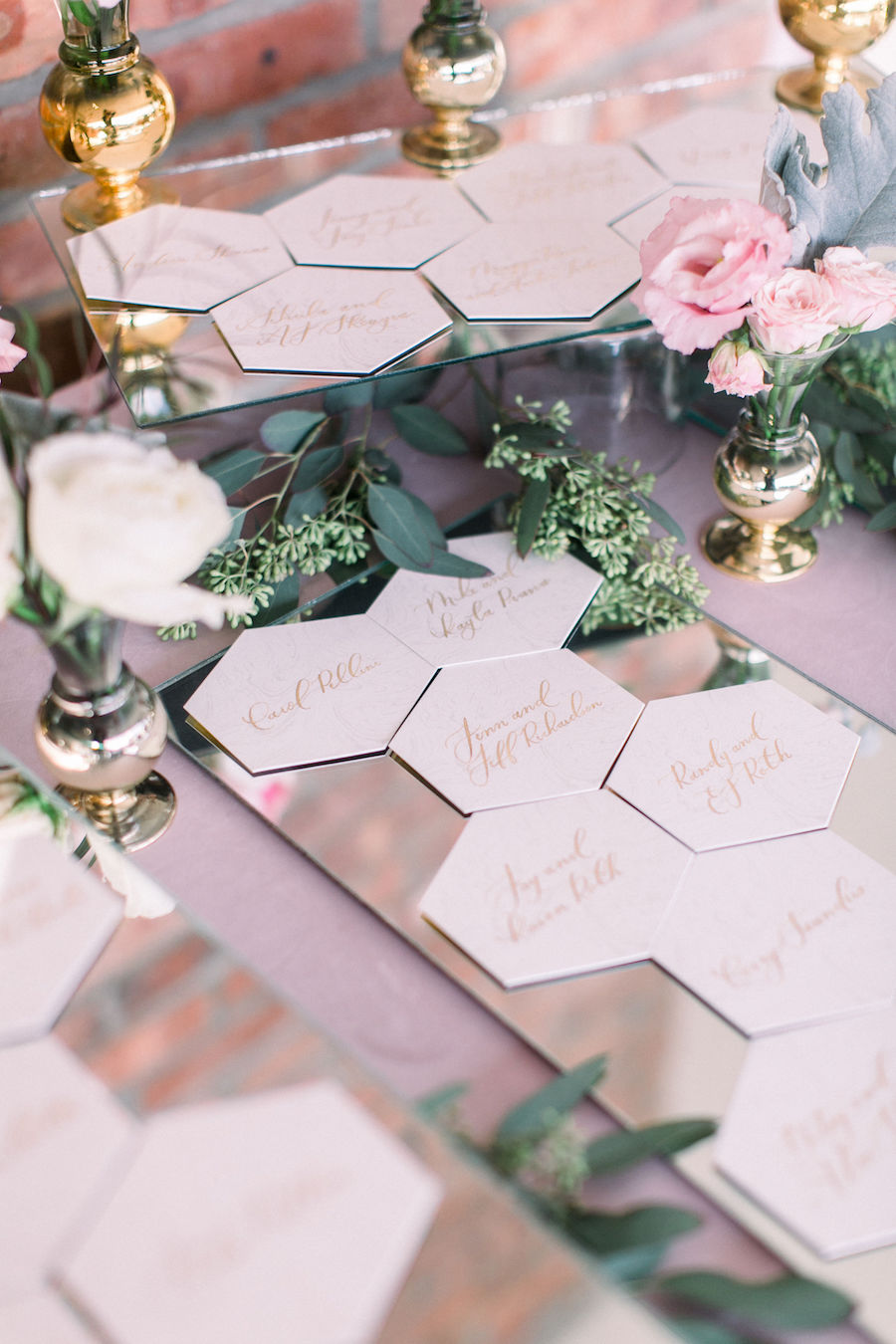 Planner Kate Malloy displayed some of the couple’s modern, hexagonal escort cards by Gus & Ruby Letterpress on glass plates of varying heights and hung the others on a gold-painted branch peeking out of a floral arrangement. 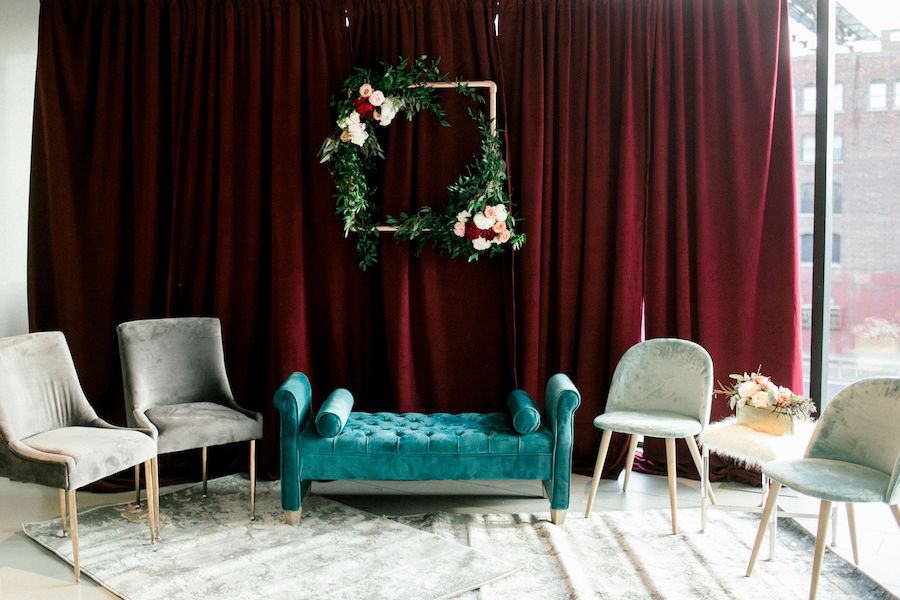 For the photo booth backdrop at the reception, Malloy created a contemporary velvet-filled set inspired by Mark Seliger’s portrait studio at the Vanity Fair Oscar party. 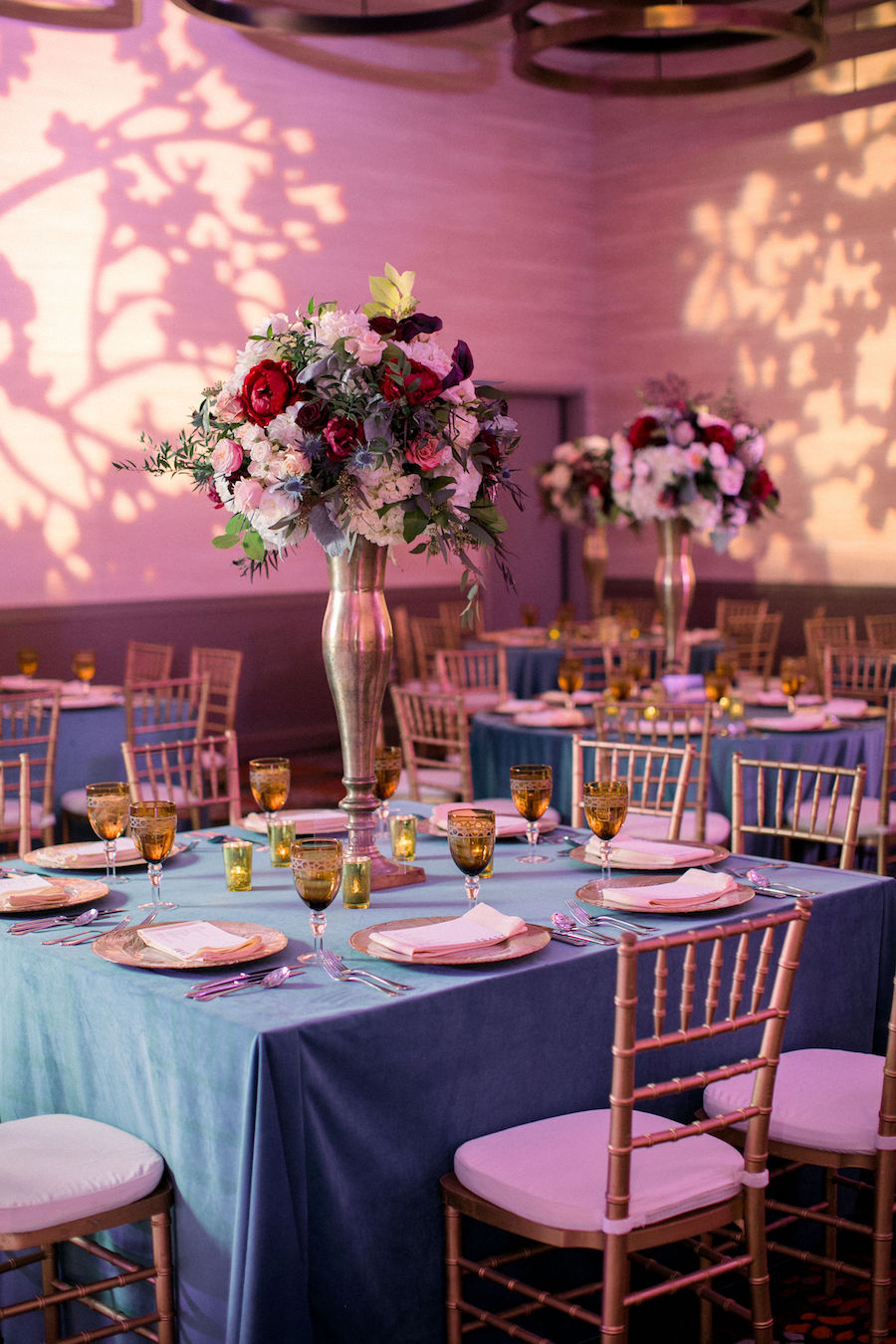 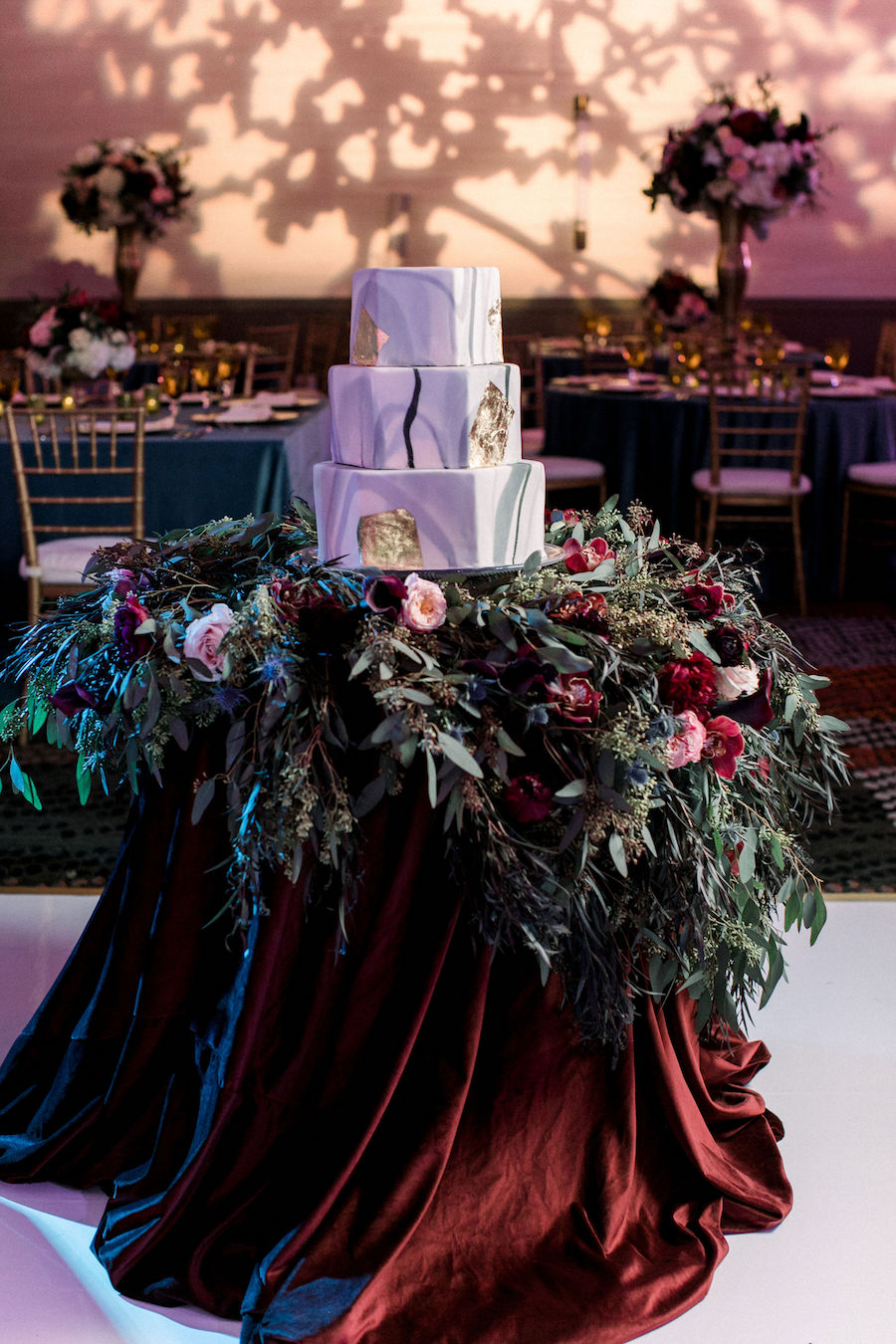 The couple’s three-tier art deco-inspired almond cake was created by the hotel’s catering team. “It was one of the only design pieces I really cared about. I had seen a lot of marble cakes on Pinterest and I really liked [them],” Tricia says. 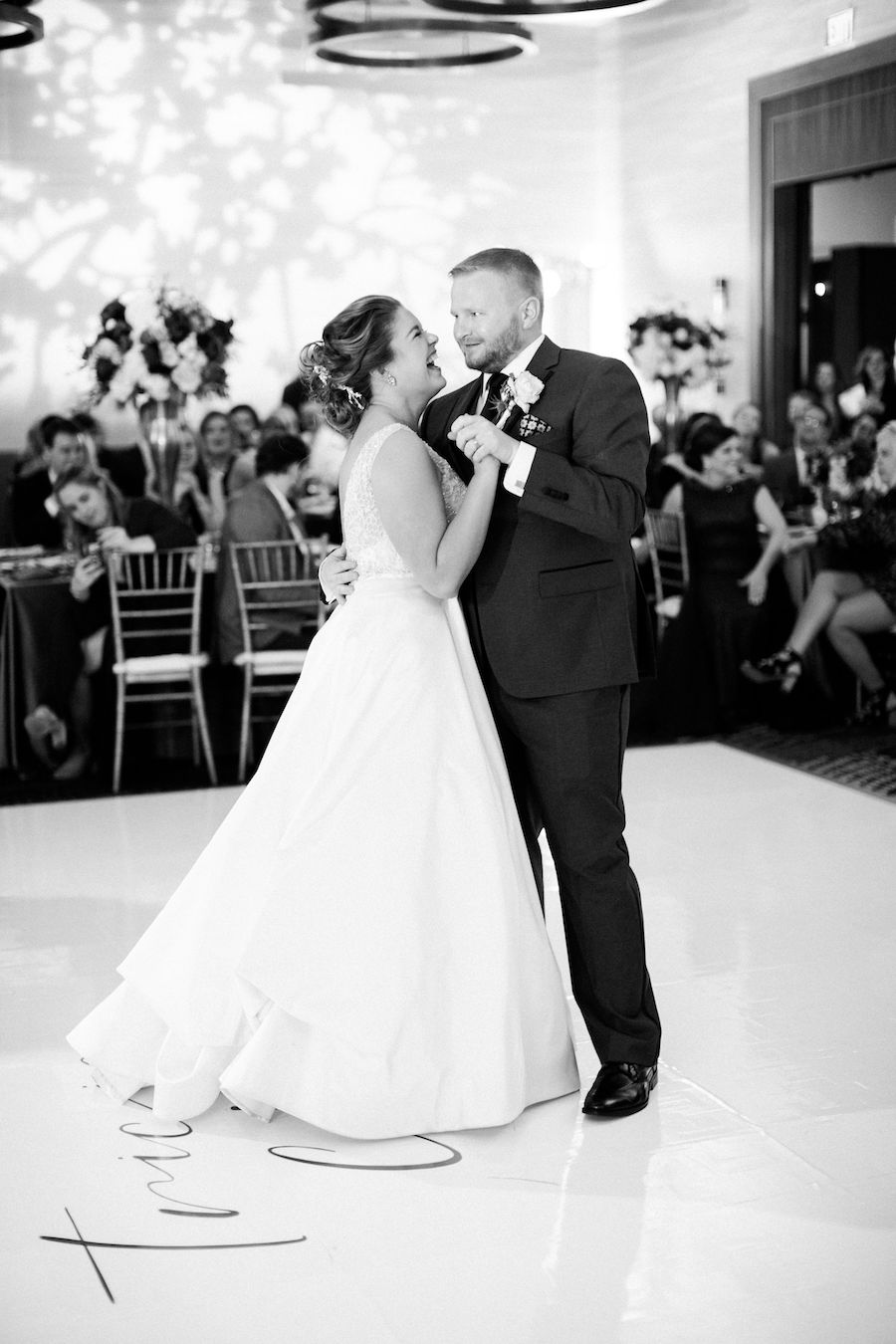 As a nod to their proposal, Tricia and Collin had their first dance to their favorite song, “Thinking out Loud” by Ed Sheeran.