See How a Portland Couple Threw A Stunning Summer-Camp Soiree

They swapped vows lakeside under the dreamiest floral-adorned chuppah. 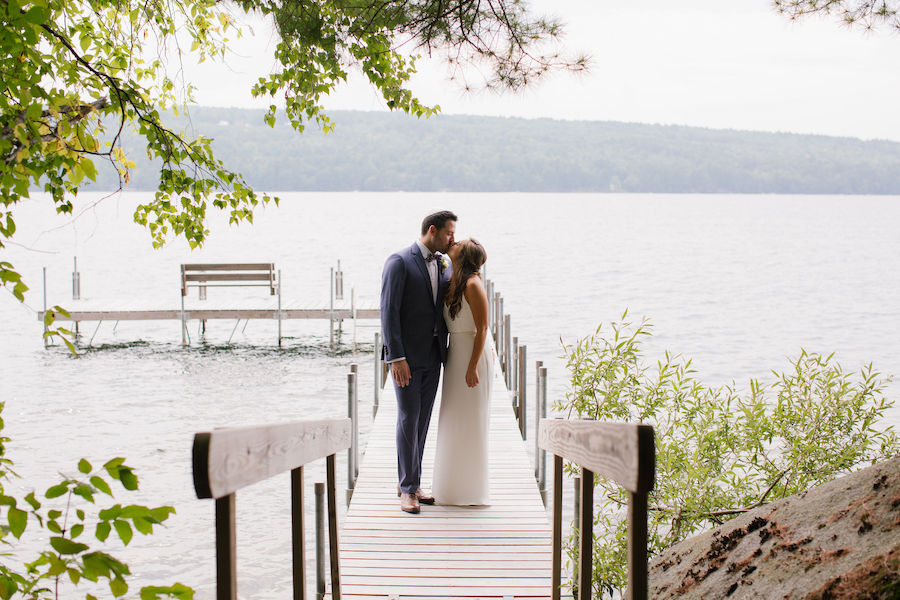 When Maine couple Carly Rapaport and Alex Vargas started planning their August wedding, the laid-back lovebirds knew one thing: It had to be at Oxford-based Kamp Kohut, a picturesque summer camp owned by the bride’s family. The rest, they left up to planner Janie Haas, who transformed the lakeside property into a refined venue with plenty of rustic flair.

See it all below and read what the bride and groom each had to say about their big day!

How and when did you first meet?
Carly: We met in 2014 on a birthright trip to Israel. We were living about a mile and a half away from each other in Boston, but we met in a totally different country. We were both in our last year of eligibility, and there were 20 girls and five guys [on the trip], so the odds were not in my favor. Alex was wearing these hilarious red wind pants, so it was very easy to spot him right away, but it took him a while to come talk to me. He’s very quiet, and I’m not.

Tell us about the proposal.
Carly: One of our best friends, Sarah, who we met on the trip, helped Alex coordinate the proposal in the middle of Central Park. I work for a summer camp in Maine, and I happened to be going to New York to pick up a new group of campers and Alex totally surprised me. I’d asked him to come with me [on the trip] but he canceled a week before, so I was pretty bummed. I was staying with a friend in New York and meeting another friend for dinner and she was like, “Oh we ran into some people we know in Central Park. Do you mind coming to say hi?” So, we walked over, and then I see my sister and my brother-in-law, who live in Los Angeles. I was like, “Oh my god, what a fun surprise!” But when they turned around, my sister was crying, and they were holding up signs that said “Will” and “You”. Then Alex popped out from behind a rock with the “Marry me?” sign. It was the perfect surprise. I was like, “Is this real?” 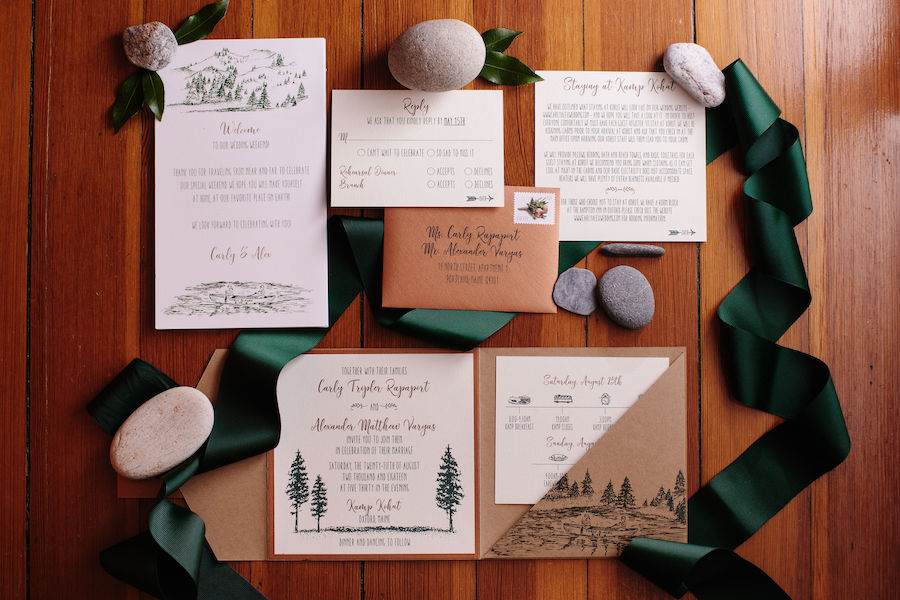 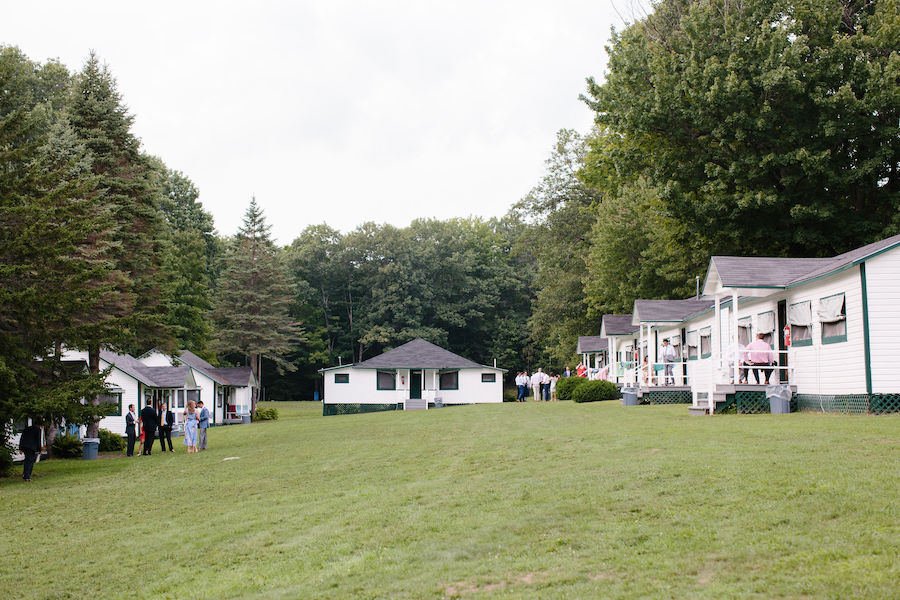 How did you choose your venue?
Carly: My parents bought [Kamp Kohut] when I was four years old, and now I work for a camp year-round, so I’m a true camper. Alex knew nothing about summer camp until we met, so it was really fun to share that part of my life with his family. As a little girl, I always thought it would be so cool to get married there. So we [held our ceremony] right on the waterfront where I taught waterskiing for like eight years, and my staff stayed on to work the wedding and help us make it all happen. For me, it was the most special thing ever.

What was most important to you as you started to plan the wedding?
Carly: Because Alex is from Los Angeles, none of his family had really been to Maine, a camp, or slept in a cabin so we tried to be really sensitive to our guests. Most of them stayed at in cabins, so we were all about making sure everybody was super comfortable and that we provided good food and drink.

Alex: My main goal going into planning was to be sure [Carly and I] didn’t have any major conflicts. I’ve seen people plan the whole thing and be in each other’s faces about the silliest of details. So, for the most part I was just supportive of everything she did. When we went to do things like look at silverware and tablecloths, we’d plan how we’d tackle it beforehand. [I’d ask her], “Do you want my opinion in the moment? Or do you want me to think about it?” so I could gauge how important things were to her and how much influence I’d have. 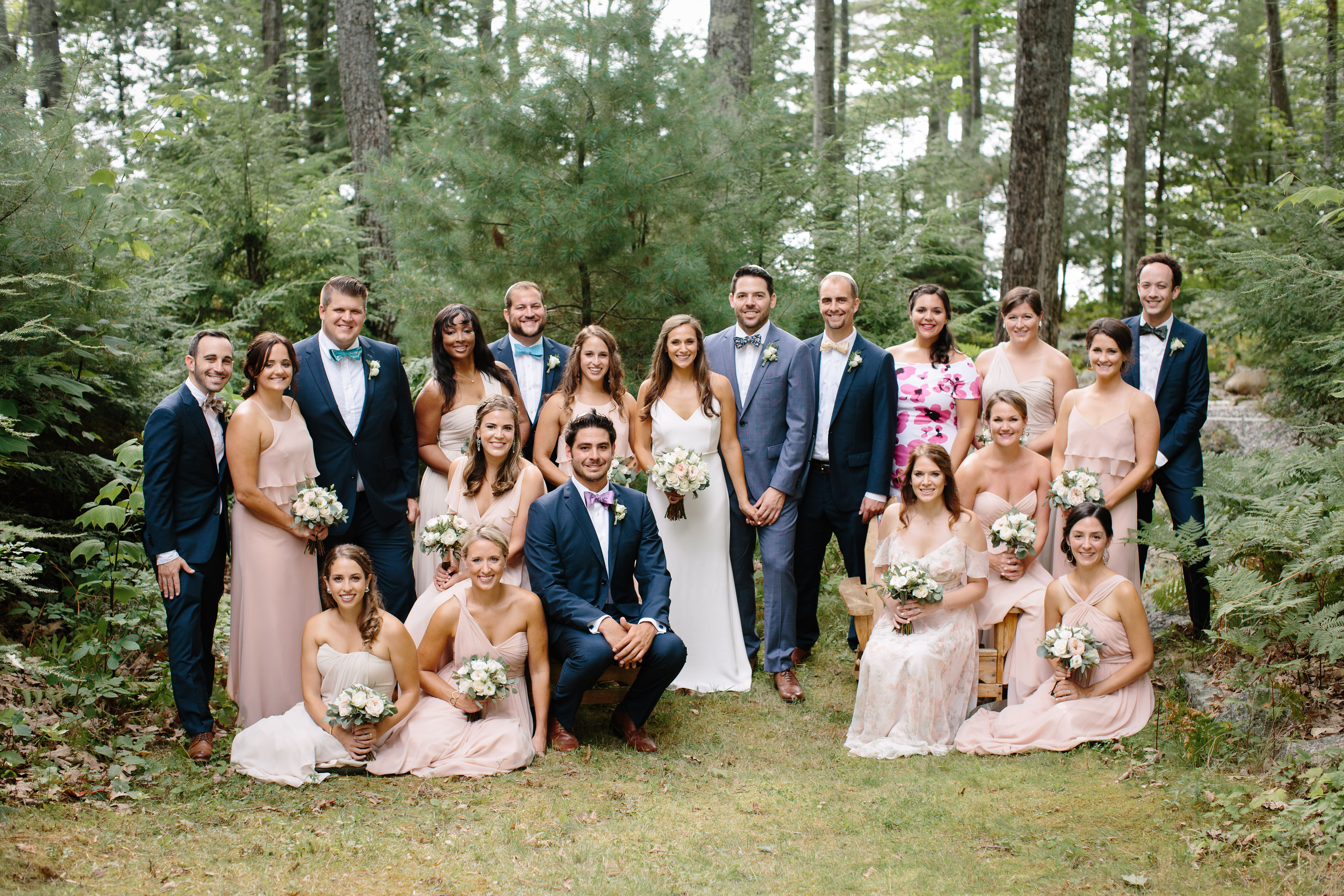 Did you include any special, personal elements in your ceremony?
Alex: Whenever we go somewhere, we do a selfie just to capture the moment. In our apartment, we have a collage of the [photos]. So before the ceremony, [our officiant Sarah and I] hid a selfie stick up in the chuppah, and then at the beginning she told everyone to “Look around and capture the moment,” and then was like, “Well, actually, Carly and Alex do this thing where they take selfies, so we’re going to do one right now.” I really liked it because I don’t think I’ve ever seen a wedding photo that had everybody at the wedding in it. It’s kind of like Where’s Waldo?

Tell us about your dress. What did you love about it?
Carly: It’s by Alexandra Grecco, and I got it at Ceremony on Beacon Hill. I’m obsessed with that place. I probably went to like, five different stores and tried on hundreds of dresses, but this was actually the very first dress I tried on. I knew it was exactly what I wanted, but I was like, “I’m going to keep trying other things just to make sure.” [The dress] needed to be pretty lightweight and comfortable because we were on grass and it was really hot. I’m also not super girlie, so it was perfect.

Alex: I figured she’d go with something that was simple but elegant, and that was pretty spot on. There wasn’t any really long train or anything like that, it was perfectly her—unassumingly attractive. 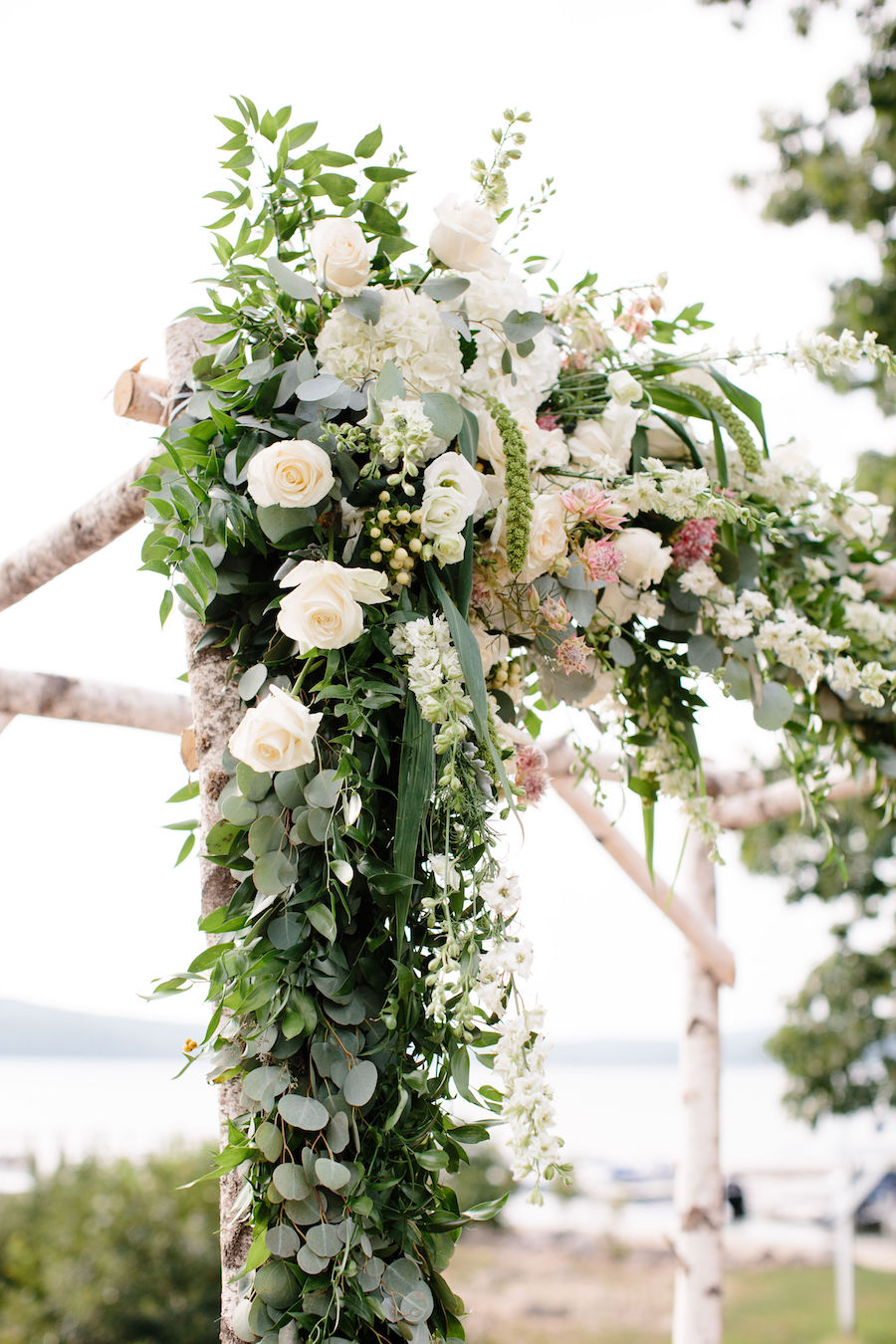 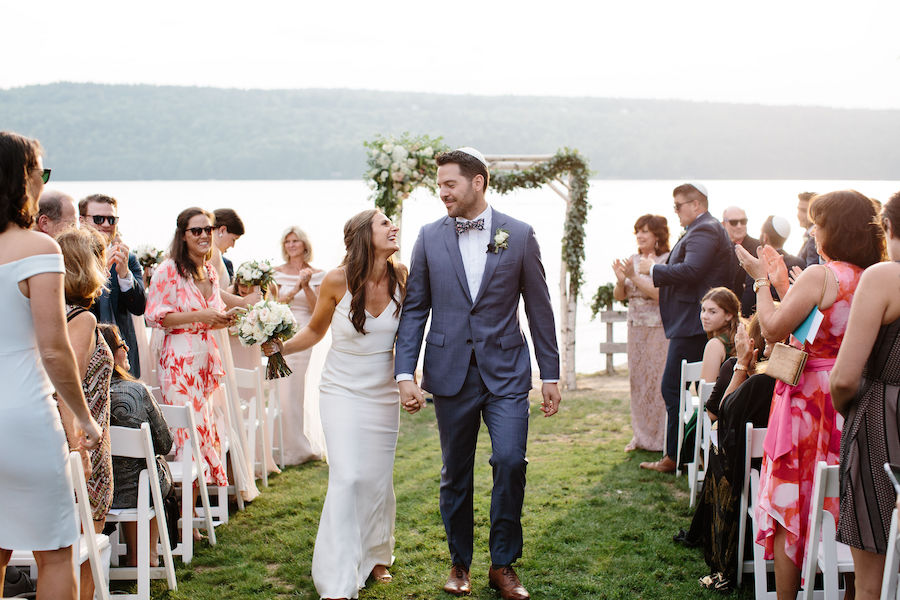 How would you describe your wedding style?
Carly: I think we wanted to be classy but relaxed. We didn’t want it to be over the top, but we also wanted it to feel special because camp can be really casual. Alex will probably say [the style] was whatever I wanted it to be. He was very low key about it!

Alex: What’s that term? Farmhouse? Like upscale farmhouse [with] copper, [greenery], and wood [elements]. Elegant farmhouse is a good way to put it!

What was your favorite décor element at the wedding?
Carly: I’m obsessed with our flowers and with our florist, Jackie. I didn’t look at a single flower beforehand. She picked everything and did it all without me ever having to say, “What do you think about this? or “Send me pictures.” I just sat with her a couple of times and said, “I like these colors and these flowers, and I have this budget.” She made it work and she was just unbelievable. I hadn’t seen anything until she came to deliver my bouquet, but I was like, “Oh my god, this looks so great.”

Alex: The lighting [at the reception] was surprising. We’d seen a picture of these light orbs from another event where it was rainy and kind of hard to see, and our wedding planner [Janie Haas] was like, “These are fantastic, I’ve seen them in person and the picture doesn’t do it justice.” We were like “Okay fine,” and then we saw them in person and I was like, “Oh, that’s actually really cool.” 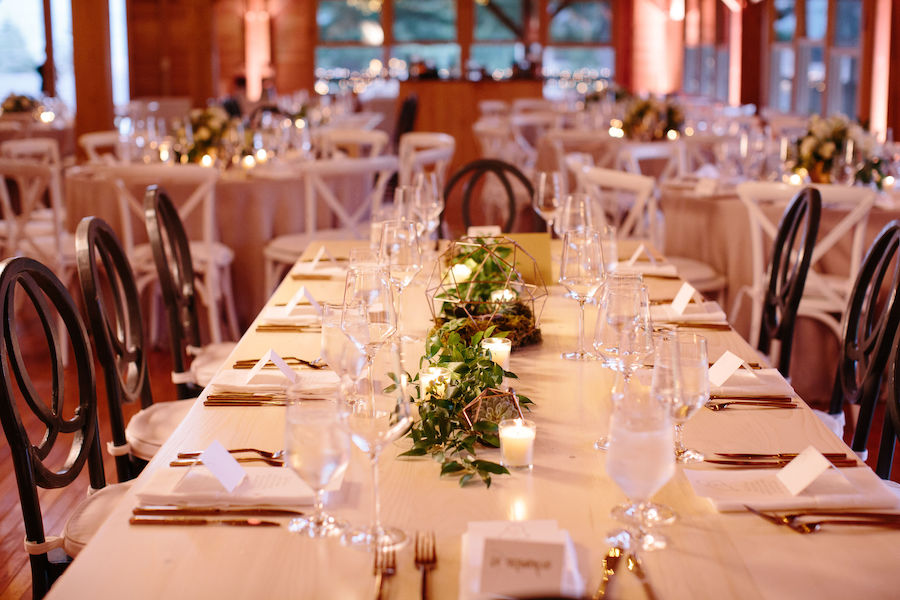 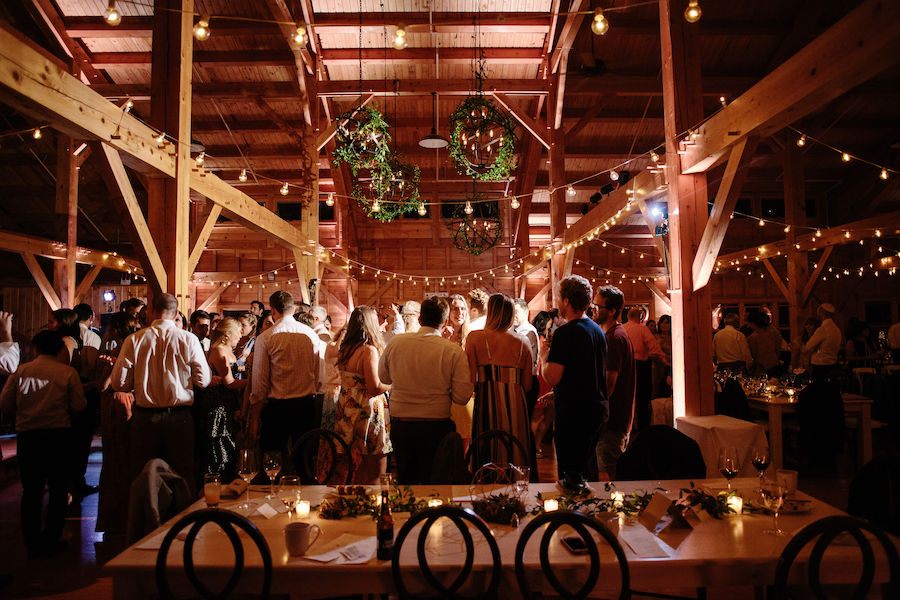 Tell us about your first dance.
Carly: We [danced to] “Shut up and Dance” by Walk the Moon. I asked [our wedding] band a couple months before if there was any way they could play it slow for just like, 30 or 40 seconds and then everybody else could join in after that. It ended up working perfectly. We’re definitely not “center of attention” people, and we didn’t want to be on display for too long. That’s always kind of been our song, so it was easy. It started everything on a very fun upbeat note. We wanted it to be a party and not stuffy.

What was your favorite moment of the day?
Carly: We did a first look, and I would totally recommend that to everybody because I think it took out all of the nerves. I loved doing the reveal with just two of us together on the water. It was really private, and we actually got to talk. My parents also have a really big deck [at their house], so after the first look the wedding party and both of our families came over. We drank and hung out for almost an hour before we went to the actual ceremony, so that was amazing. We signed our ketubah then, too, and that was really meaningful.

Alex: The first moment of the ceremony. After all the planning, rehearsing, and conversations, that first moment that she and I were there just felt like silence. It was a nice second for reflection like, “Here we are.” 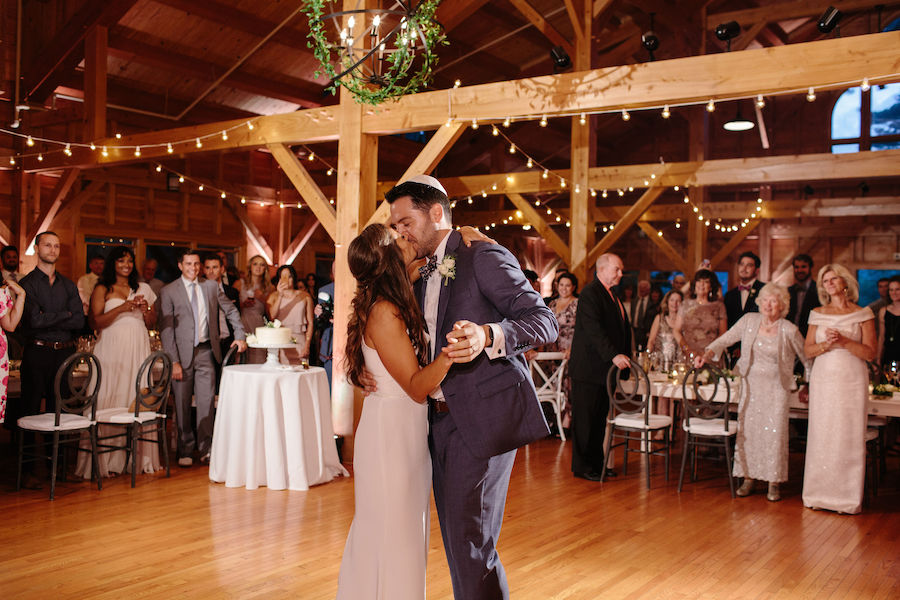