After Ten Years, a Middle-School Crush Led to a Stunning Celebration at the Providence G

The childhood neighbors wanted their wedding reception to feel like a “huge dinner party." 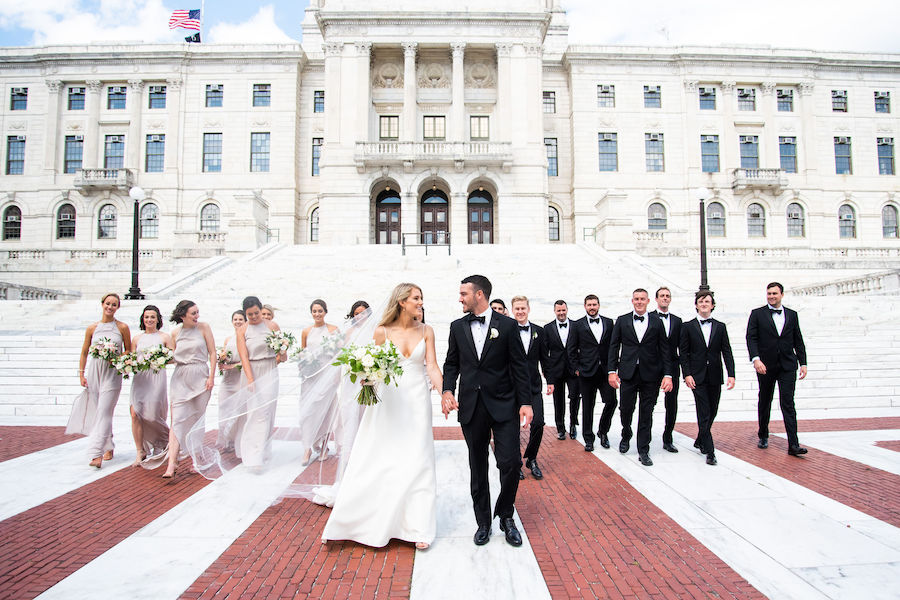 Monica Costello was a middle schooler in North Attleboro when she told her mom that she planned to go to prom with Joe Kummer, the boy who lived four houses down the street. “She was like ‘What do you mean?’ and I was like, ‘I just know that’s who I’ll be going with.’ I always had a crush on him,” Monica recalls. The two grew up together, and in high school, their walks to the bus stop grew into something greater: They started dating the summer before Monica’s junior year, and have “been together ever since,” she says.

After high school, the pair dated long-distance for six years while Monica attended college in Memphis and Joe lived in Atlanta. When they graduated, the couple bought a house in Sharon to start their lives together. “We had been together for so long, and we’d always talked about getting married,” Monica says. “We were pretty young, so we went back and forth about when that would come.” One weekend morning, Joe suggested they make coffee and take it with them on a walk to Lake Massapoag. “It was the simplest thing: He’d bought to-go cups to put our coffee in, and I thought, ‘That’s weird that there’s this little detail you thought of,’ so the idea [that he might propose] ran through my mind, but then I was like, ‘I don’t know, I feel like I would have seen this coming,’” Monica says. So they sat by the lake and talked about how far they’d come in their relationship. Then Joe got down on one knee. “I was really surprised and just so happy,” Monica says. After he proposed, and Monica put the ring on, Joe stood back up. “I remember laughing and being like, ‘Wait, do it again!’ I was asking him to get back down on one knee and propose again because I had kind of blacked out for a second,” Monica says. “We still laugh about that.”

Since many of the couple’s favorite memories took place around the dinner table with their families, they wanted their reception to feel like a “huge dinner party with all of our closest friends and family,” the bride says. They found the perfect venue in the Providence G, a luxury apartment complex and event space housed in a historical building in downtown Providence. To give their reception a comfortable, intimate feel, they dotted the dimly lit space with candles and filled it with greenery—including a 30-foot garland that spanned the length of their head table. “Everyone had the best time,” Monica says. “We have such a great group of friends and family who have known each other forever, and getting them all in one room was just so special.” 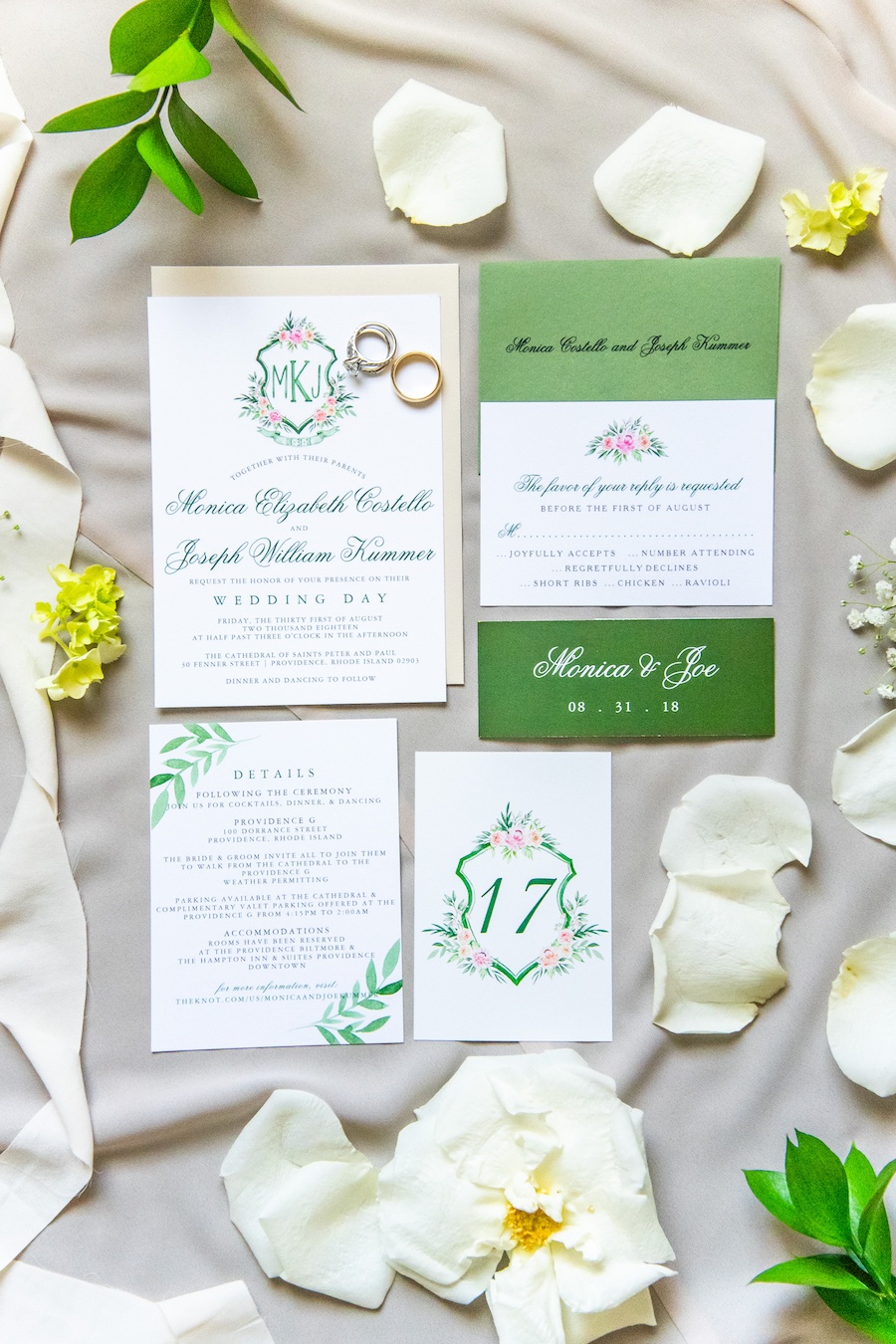 The bride used Zazzle to create and print the couple’s invitations, which featured a wedding crest designed by Etsy vendor Lana Dreams. “I went to school in the south, and as some of my friends from school started getting married,  I saw that many of their invitations had [crests]. So [our crest added] a touch of that southern wedding style that I love,” Monica says. 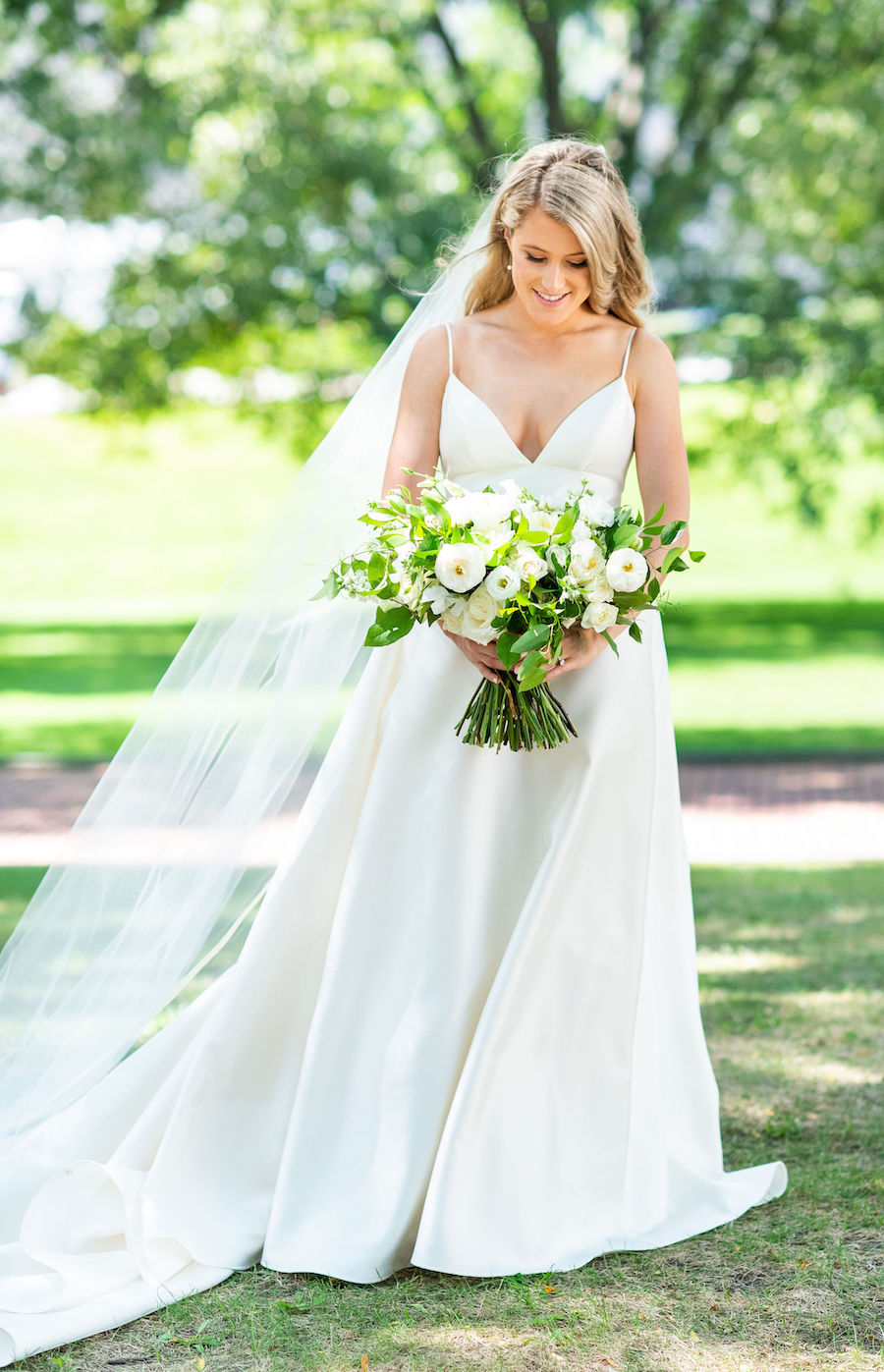 Monica first spotted her Watters gown online and loved it instantly. “I saw that dress and sent it to my mom like, ‘This is exactly what I want,” the bride says. So the pair, along with Monica’s mother-in-law, made an appointment to try it on at BHLDN. “It was the first dress I put on. I then tried on others because I couldn’t believe I’d found [my dress] on the first try, but ultimately ended up choosing that one,” Monica recalls. “It was super simple, but absolutely gorgeous, and it had pockets.” 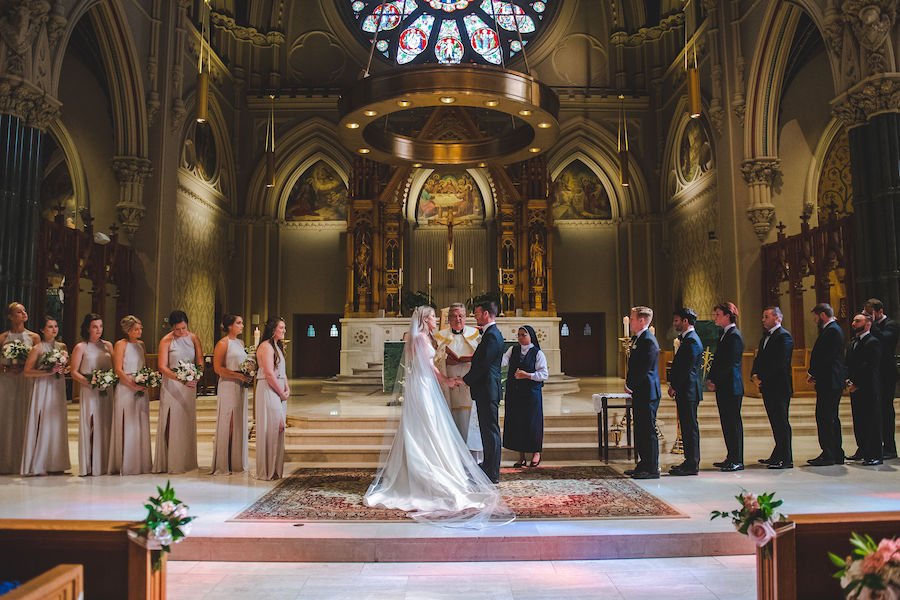 Monica and Joe’s ceremony took place at the Cathedral of Saints Peter and Paul, a 19th-century church near downtown Providence. “It’s so grand and gorgeous. The first time we saw it we were overwhelmed by how beautiful it was,” Monica says. 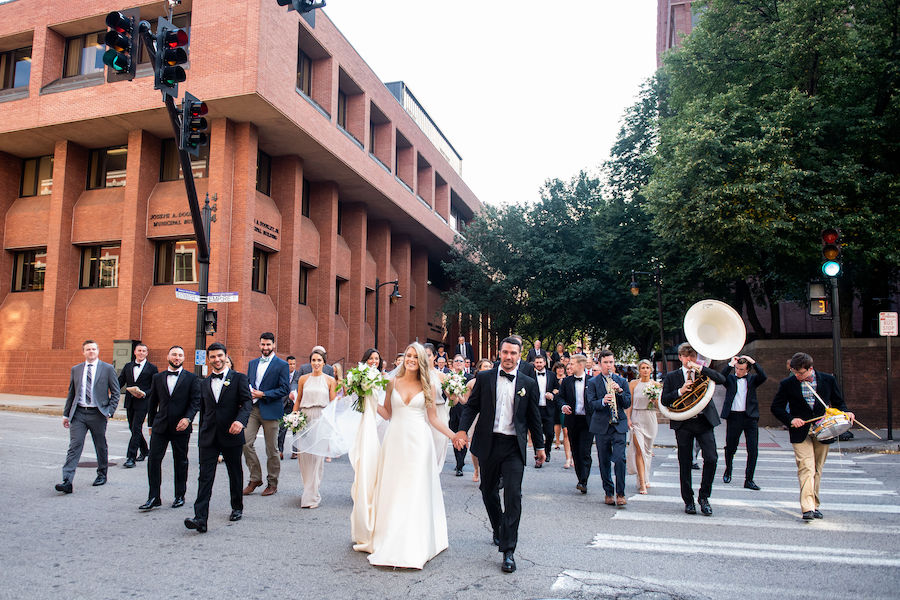 “As we got to the bottom of the church steps after the ceremony, we heard ‘When The Saints Go Marching In.’ We looked over and saw that my father-in-law had surprised us by getting a brass band. [We’d] wanted to walk from the ceremony to the reception, and have a little parade of our family and friends down the streets of Providence,” Monica says. “It was one of the coolest experiences I’ve ever had.” 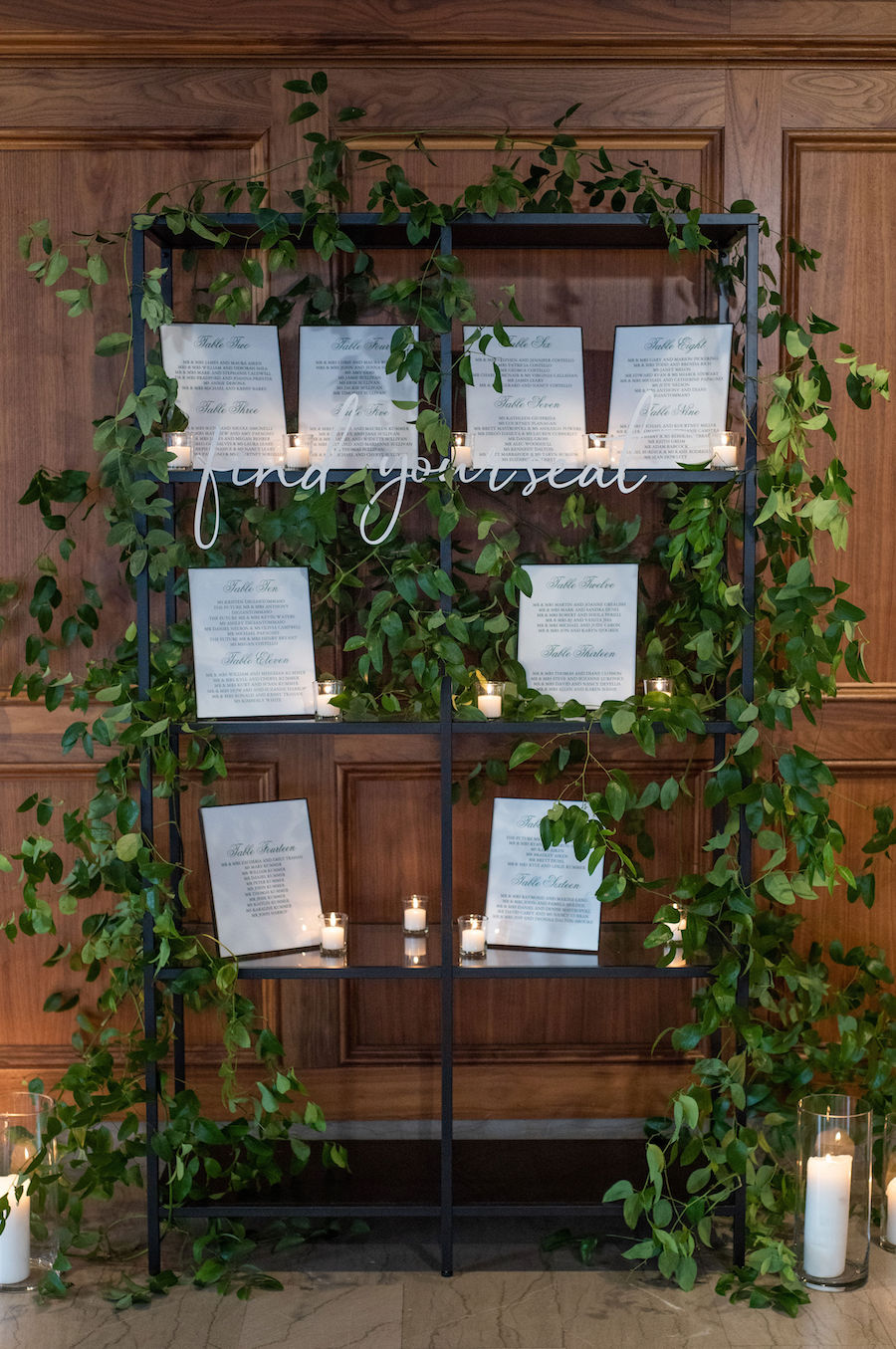 For the escort card display, Monica says she didn’t want to simply “put out a table with cards on it,” but instead do something that would bring the look and feel of an at-home dinner party into the ballroom. “I loved the idea of having this big piece of furniture with picture frames [displaying] everyone’s table assignments, and having it set it up like it was part of the space,” she says. 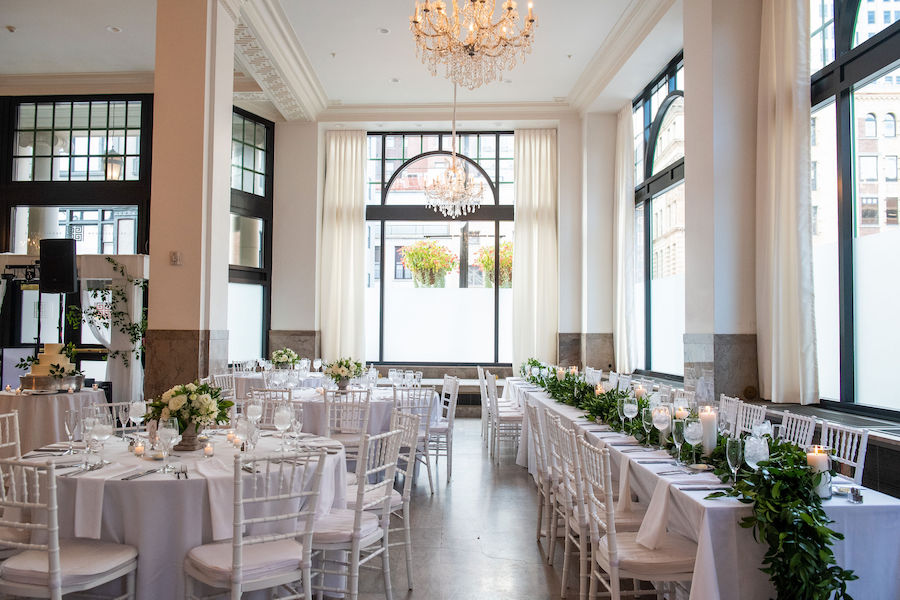 “We wanted [our guests] to feel comfortable, but also have it be super classic and kind of organic with tons of greenery and candlelight everywhere,” the bride says of the décor. The centerpieces featured white-garden and patience roses, sweet pea, and lisianthus. 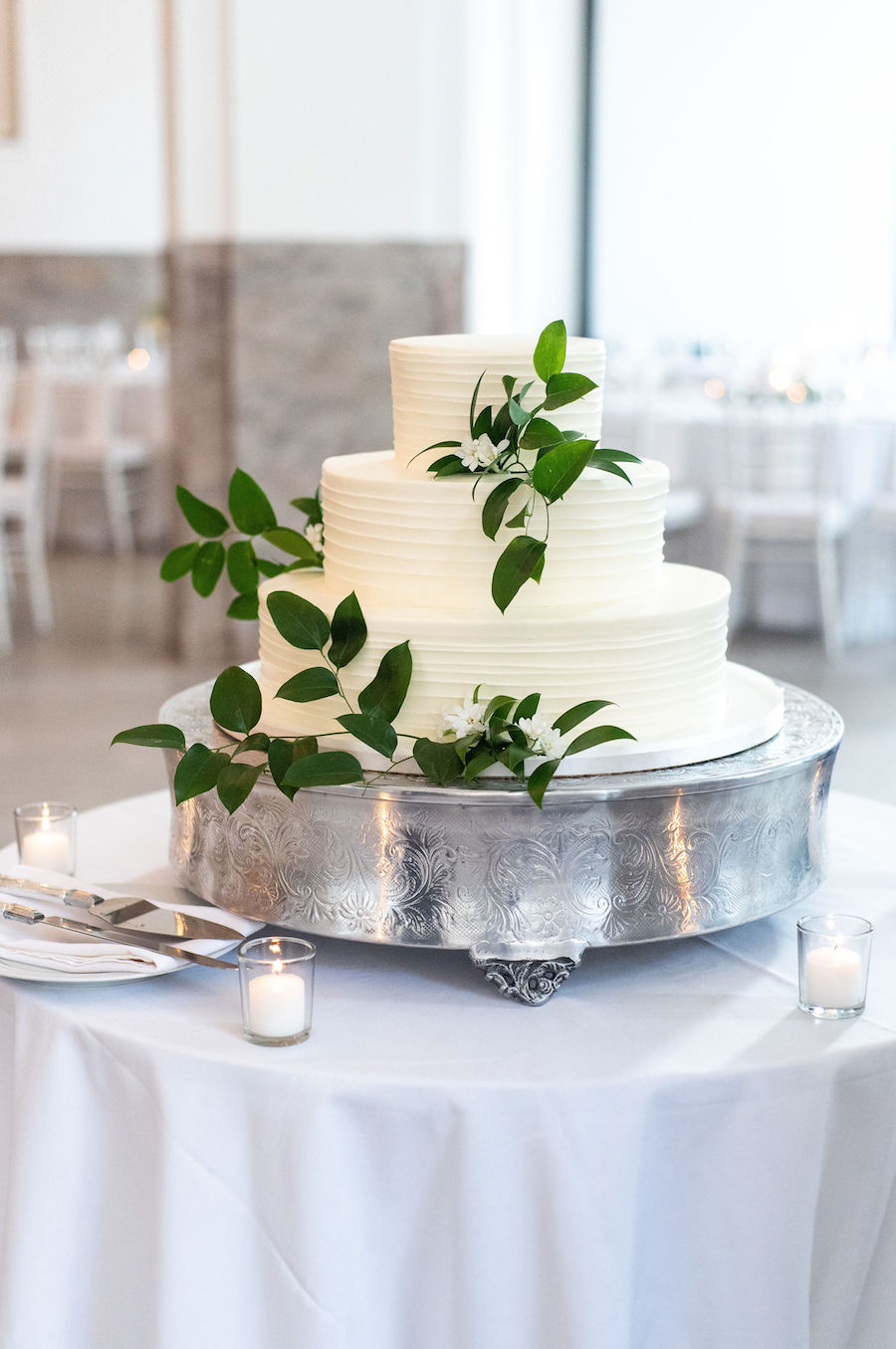 Monica and Joe served guests a three-tier, buttercream-frosted dulce de leche cake with a caramel filling inspired by the classic southern caramel cakes the couple often shared for dessert while attending school in Atlanta and Memphis. 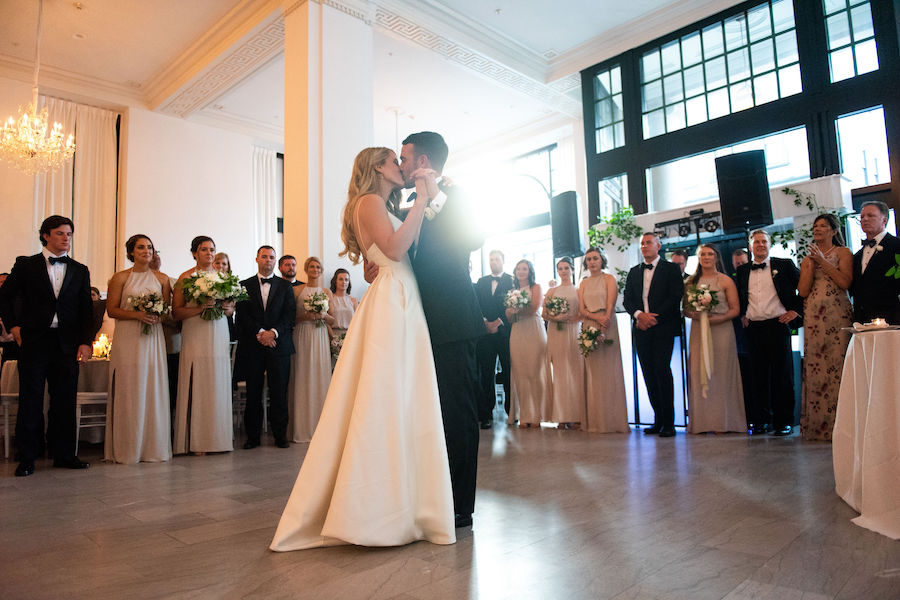 The couple had their first dance to “Never Fade” by Jack Johnson. “We both kind of loved it from the beginning because it has a line in it thats like, ‘So it came to be, that I raised you and you raised me,'” Monica says. “We thought that was cool since we had really grown up together and learned so much together throughout our whole lives.”