Even though the groom's relatives are Giants fans. 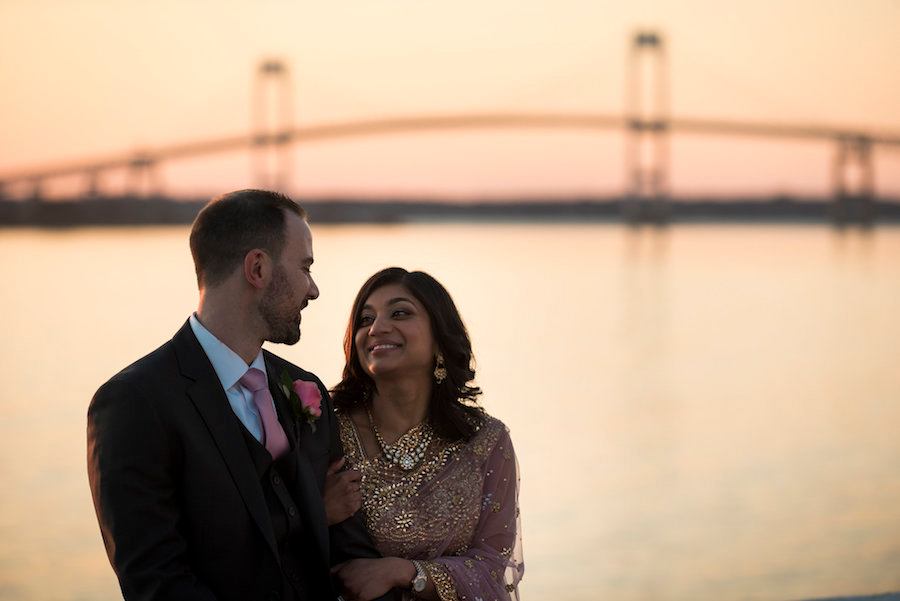 After matching on Tinder in the spring of 2016, Faizeen Rahman and Michael Frenza chatted for several weeks before they officially met at an Irish pub in Stamford. Even though the Connecticut residents had spent time getting to know each other ahead of their first date, Faizeen was nervous. “When you date someone on the Internet you’re like, ‘Are they going to look like their picture? What are they going to actually be like?’” she says. “But both of us were pleasantly surprised.” They’d only planned to have one or two drinks, but ended up staying for dinner and hanging out late into the evening.

In the fall of 2018, the couple planned a trip to Europe, and Faizeen’s friends predicted that Michael would propose while they were away. That didn’t happen. “I knew there was no way he was going to bring an expensive piece of jewelry all the way overseas,” Faizeen says. Then, in October, the pair decided to go for a hike near their home to see the foliage along the Hudson River. In recent months, Faizeen says, Michael had mentioned that his mom wanted to know when they would get married. On the couple’s walk that day, he said it again. “He would bring it up here and there and I wasn’t putting two and two together,” Faizeen says. “In my head I’m thinking, ‘What is it again with this mom question?’” This time after he brought it up, though, Michael got down on one knee. “I was so surprised,” the bride says. They never finished the hike, instead spending the day phoning friends and family. “The whole day was kind of a blur,” Faizeen recalls.

When the couple began planning their wedding, the first thing they decided was that it had to be in Newport, where Faizeen grew up. While coordinating Faizeen’s brother’s wedding years before, her parents had visited Belle Mer, a contemporary venue on Narraganset Bay, and thought it would be perfect for their daughter’s future wedding. Once they were engaged, Faizeen and Michael called the venue to check availability for the following year. There were only two dates: one in April and one in October 2019. “I was like, ‘Okay a year to plan a wedding seems reasonable,’” she recalls. But the couple soon realized that her brother’s best friend was getting married that same weekend in October, so they were left with April 6— a mere six months away. “We went into super planning mode,” Faizeen says.

Since they were short on time and lived hours away from their venue, the couple focused on narrowing their guest list and sending out invitations, while Faizeen’s mom, Hilli, handled the décor and the details. On their wedding day, the look that Hilli brought to life was “a perfect expression of our style,” Faizeen says, with simple yet elegant tablescapes and pink and white florals. And just as planning was a total whirlwind, so was the big day itself, the bride says. “The wedding planning process can be a little stressful. You’re emotional, you’re nervous, [and] things aren’t always going to plan,” she says. “But then [the day of], you just look around and see all of your favorite friends and family around you. I’m obviously biased, but when I woke up the next day, I was like, ‘That was one of the best parties I’ve ever been to.’” 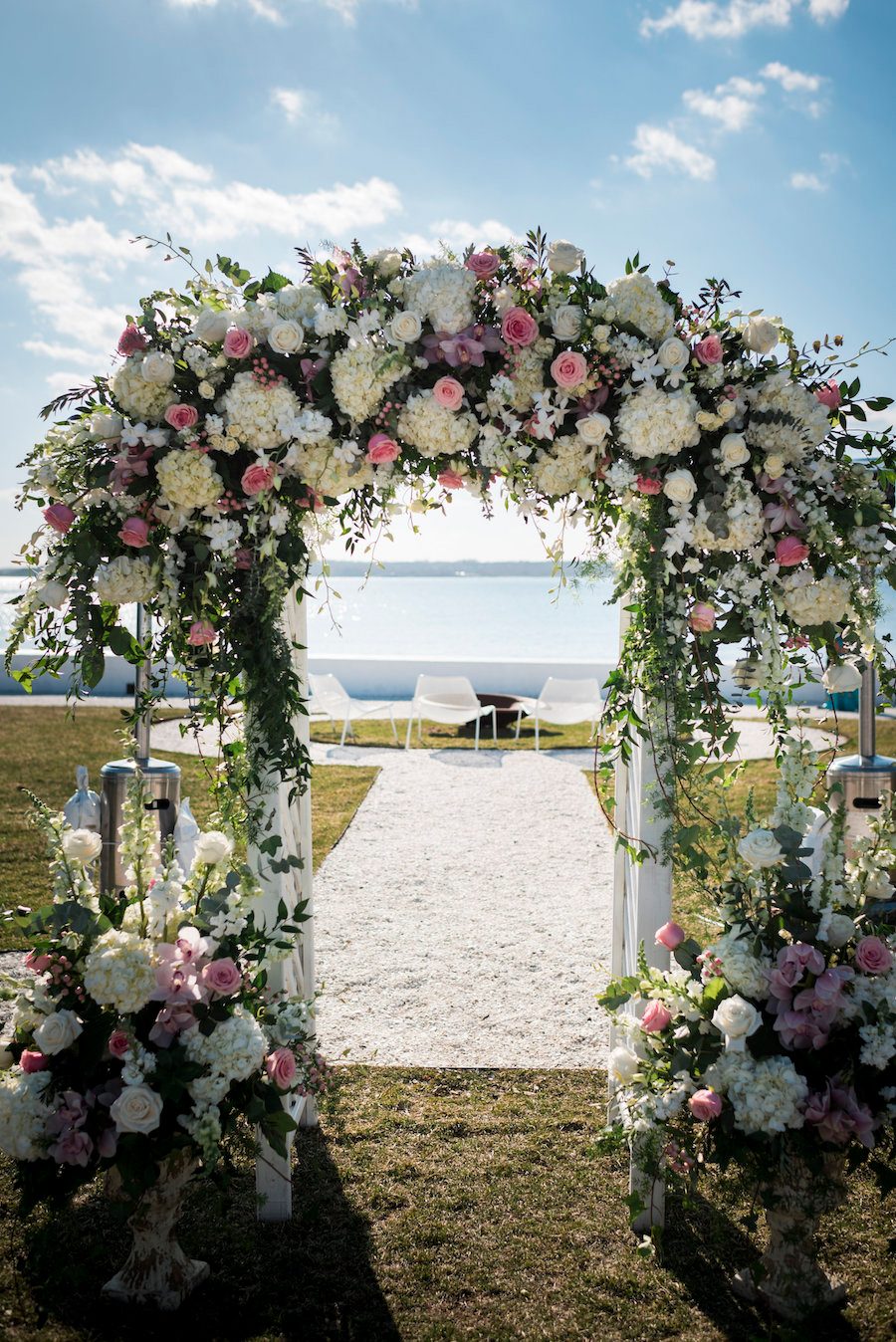 Faizeen’s mom, Hilli, worked with Carlone’s Florist to create a bloom-covered arbor for the couple to stand in front of at their bayside ceremony. 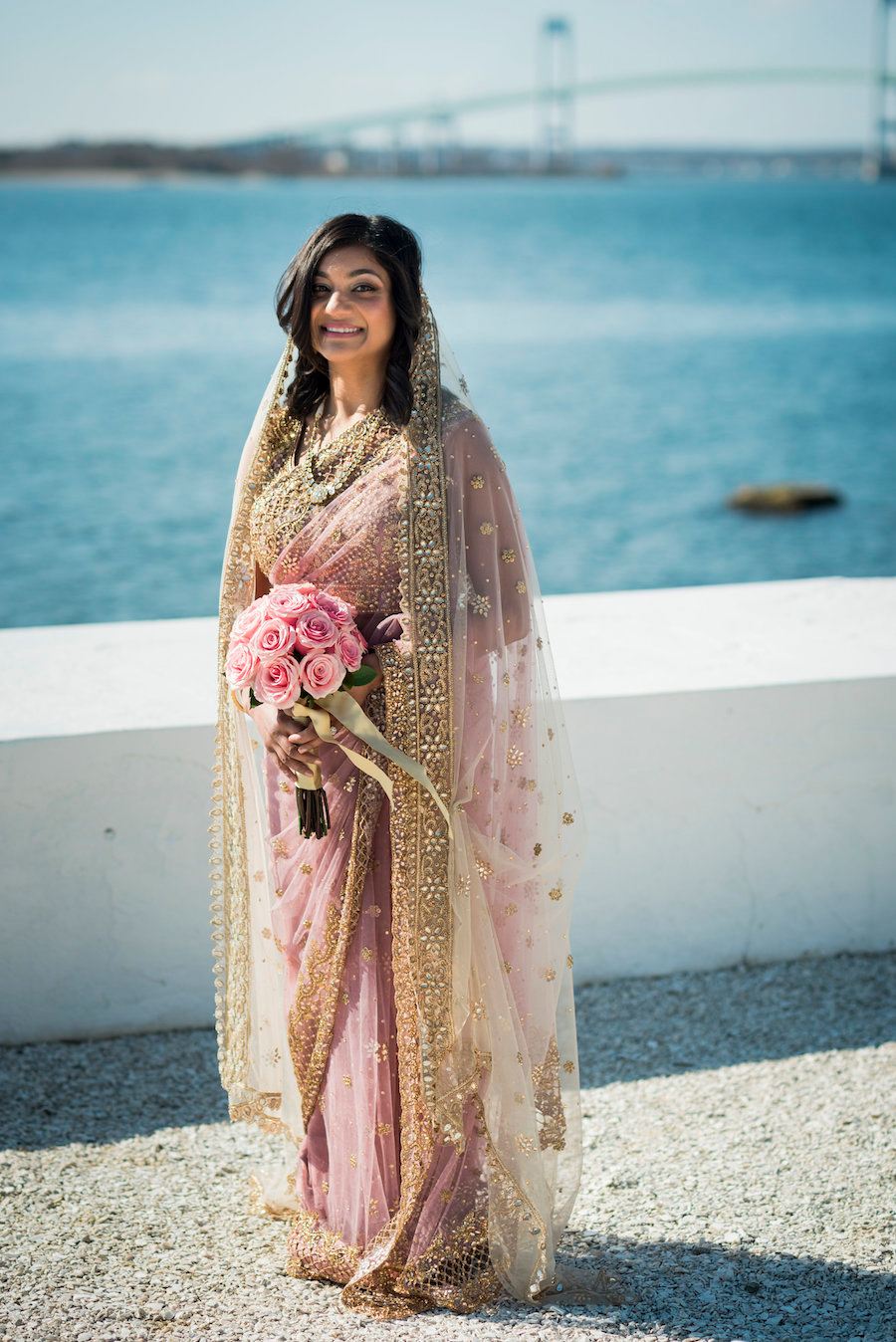 It was important to Faizeen to wear a sari on her wedding day, so her mom traveled to Bangladesh, where the bride’s family is originally from, to have one custom-made by a friend who owns a small fashion label. “We wanted to honor our culture in that way,” Faizeen explains. 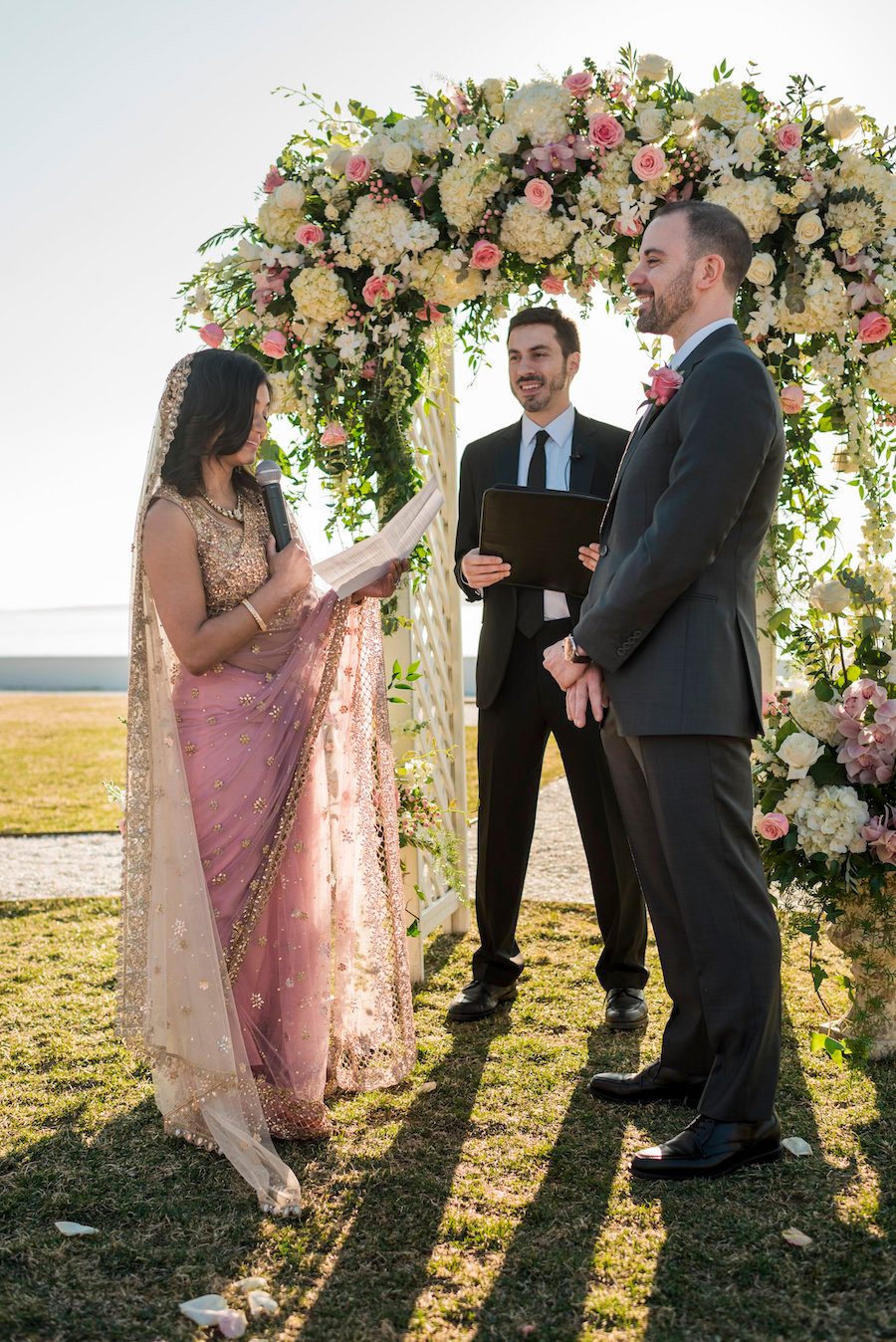 For Faizeen, the ceremony was the most important part of the day. The couple wrote their own vows, and a family friend officiated the ceremony. “His parents have been good friends with my parents for over 40 years, so it was nice to have a familiar person marry us,” Faizeen says. 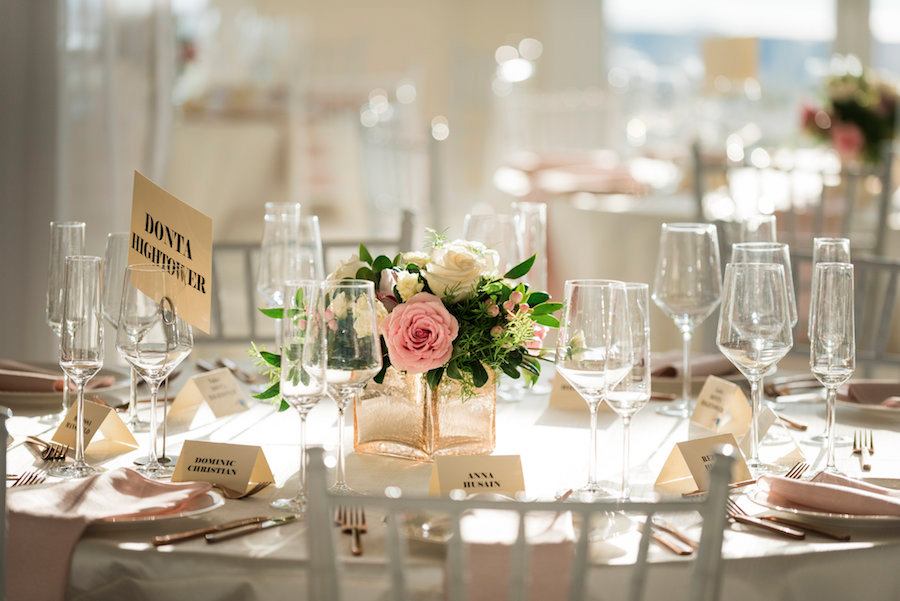 The bride’s relatives are New England Patriots fans, so as an homage to the team’s recent Super Bowl win, they named each table at the reception after a Patriots player. “It was a little bit of a jab to the groom’s side because they’re Giants fans,” Faizeen says. “We also had a little bit of goodhearted fun putting [Michael’s] parents at the Gronkowski table.” 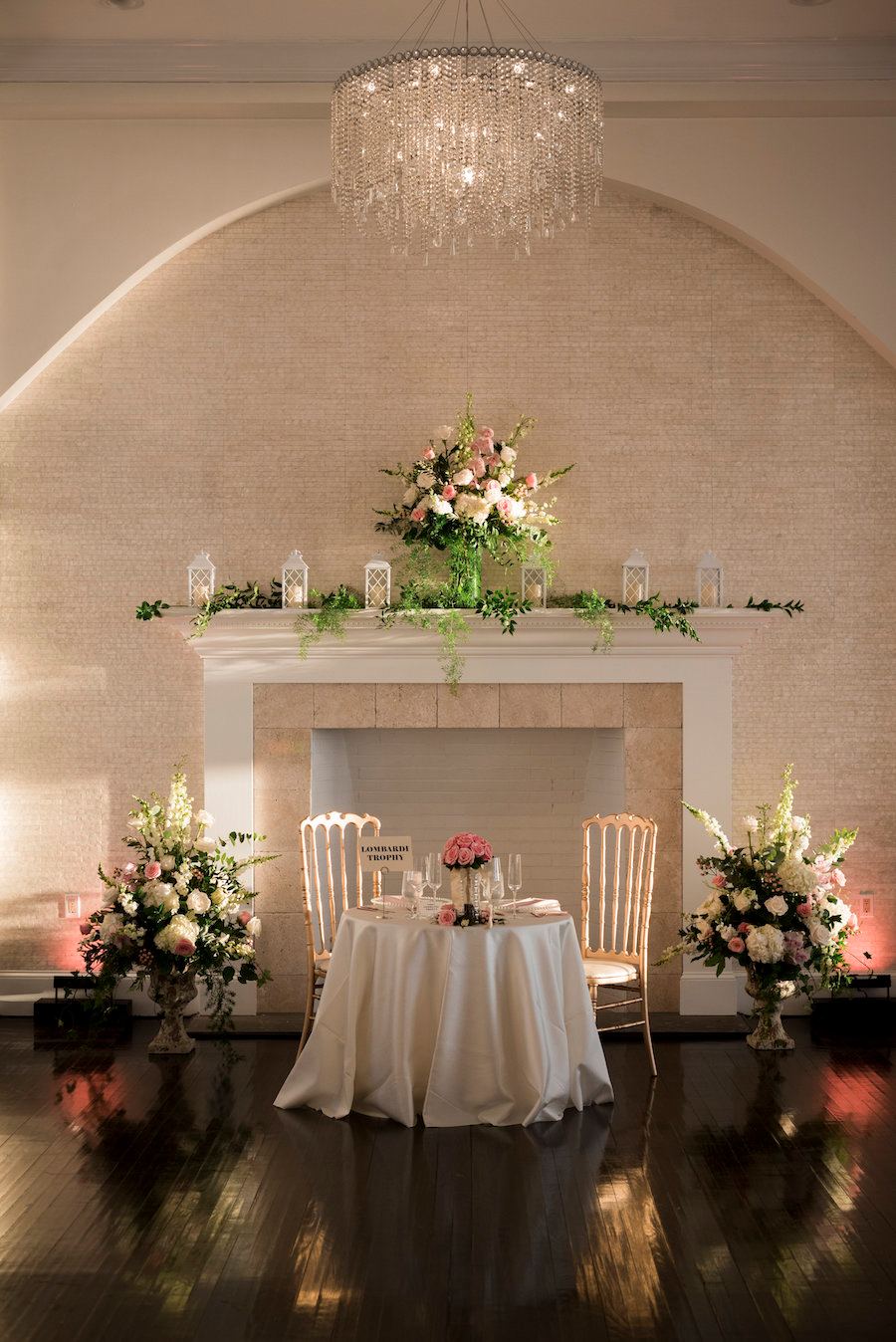 During their reception, the bride and groom held court at a private sweetheart table. “We wanted to sit next to everyone at the wedding, so instead of doing that were like, ‘We’ll just have a table for just the two of us.’ And the person I spent the least amount of time with at the wedding and the day before was Mike, so it was nice just to remember why [we were] there and sit down for a second together,” Faizeen says. 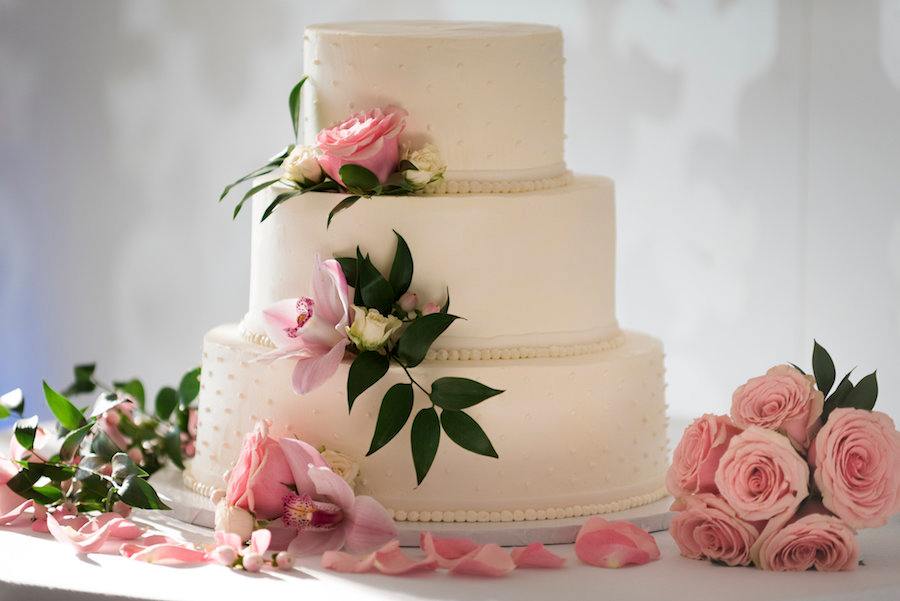 Faizeen and Michael’s wedding cake, prepared by the catering team at Belle Mer, featured two flavors: chocolate toffee crunch and caramel macchiato. As for the look? The pair wanted it to be “simple and elegant [with] the focus more on the taste than the bells and whistles,” Faizeen says. 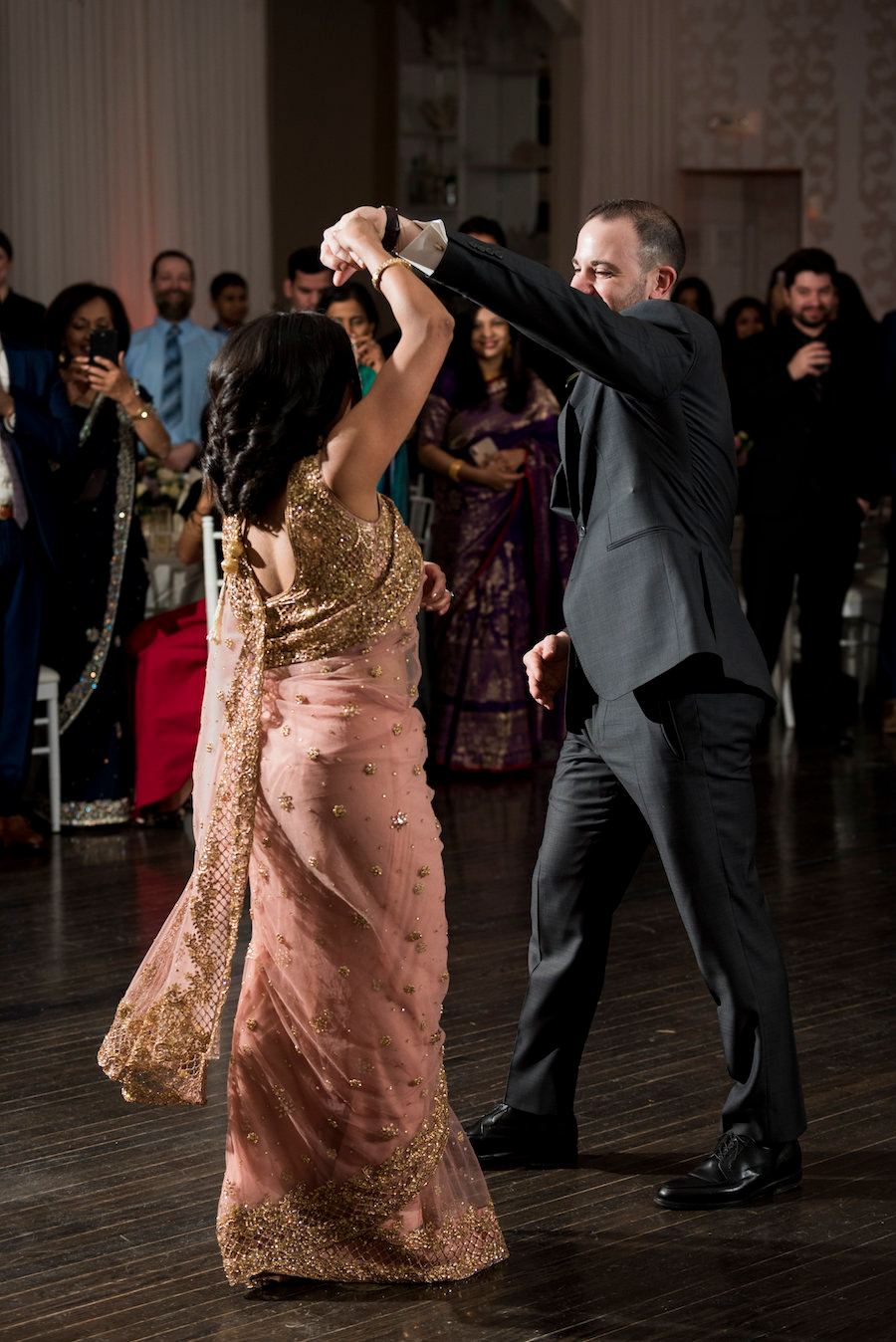 Faizeen and Michael had their first dance to “Is That Alright?” sung by Lady Gaga from A Star is Born. “I wanted something different. I didn’t want an ‘old timey’ song and I’m obsessed with Lady Gaga,” the bride says.