"We revolve our lives around him to a ridiculous point," the bride says. 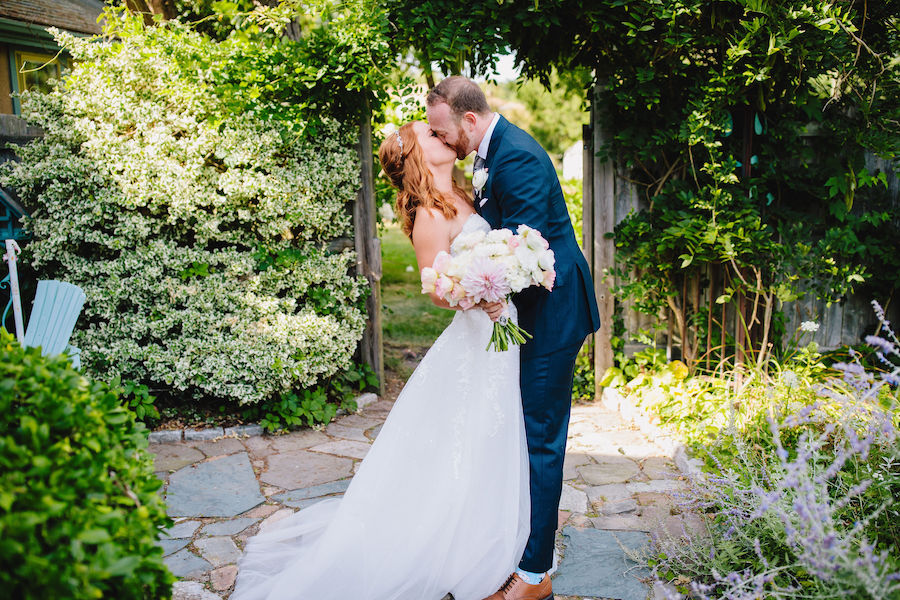 When Christina Hunley swiped right on Mac Hoggan’s Tinder profile in October 2014, it was mostly because she wanted to feed penguins. “Mac used to volunteer at the aquarium and his Tinder picture was of him feeding the penguins. I thought that if I started talking to him I might be able to feed the penguins too,” Christina explains. That didn’t happen, but the two did plan to meet for drinks in Brookline. Their first date was a success—kind of. “He told me right off the bat that the he didn’t want to date anyone and wasn’t going to have feelings for me, so I shouldn’t get my expectations up,” she recalls. “As soon as I heard that I was like, ‘Alright, well I’ll prove you wrong.'”

By February 2017, the couple was living together in Watertown and Christina was finishing up grad school. One day, Christina took Mac’s car to commute to class. As she started driving, she heard something rattling in the glove compartment. When she opened it, there was a ring box inside. “I was like, ‘Who leaves this in his car?’ but that was his secret hiding place,” Christina recalls. She put the ring back, and didn’t say anything about it. Not to Mac at least: “I told our friend and then she told her husband, who then told Mac, who then just kind of panicked and proposed,” the bride says with a laugh. Mac had planned to pop the question at the barn where Christina rode her horse, but once he found out Christina had discovered the ring he knew he needed to act fast. Shortly after, they were on a trip to Jay Peak resort in Vermont and Mac got down on one knee.

As the couple began planning their wedding, both Mac and Christina knew they wanted to tie the knot on the water. They visited several waterfront venues, but none of them had the space and style the couple desired. When they walked into the Beauport Hotel, however, they knew right away it would be the perfect location for their nuptials. “I don’t know if they pump fragrance into it or something, but the smell was good, it was very new, and we felt we’d be able to really tailor it to what we wanted,” Christina says. The other Beauport perk? The venue would permit the couple’s dog, Auggie, to join them on the big day, too. “That was probably most important,” Mac says.

When their wedding day arrived, Christina and Mac’s venue was decked out with pale blue linens and other beachy elements, plus elegant touches such as mirrors and towering pale pink and white floral centerpieces. “[The flowers] are one of the things I think I’ll always remember,” Christina says. “People that went to our wedding say they loved the flowers, and also that the band was the best they’d seen.” Just how lively, exactly, was the dance floor at the couple’s reception? “We had [guests] who got very very into it,” Christina says. “My friend’s fiancé even ripped his pants.” 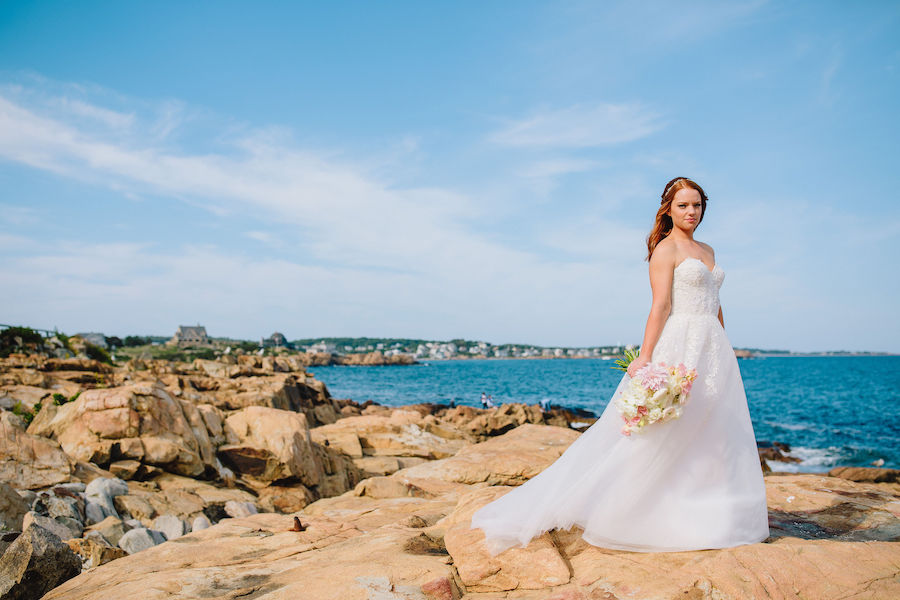 Dress shopping was challenging for Christina, who tried on numerous gowns before making her final decision. “I’m very short, so everything looked like I was trying on my mother’s clothes. It’s hard to feel like you look good when everything is two feet too long,” she says. When she slipped on this Reem Acra gown at L’élite Bridal Boutique, though, she knew she’d found the one. 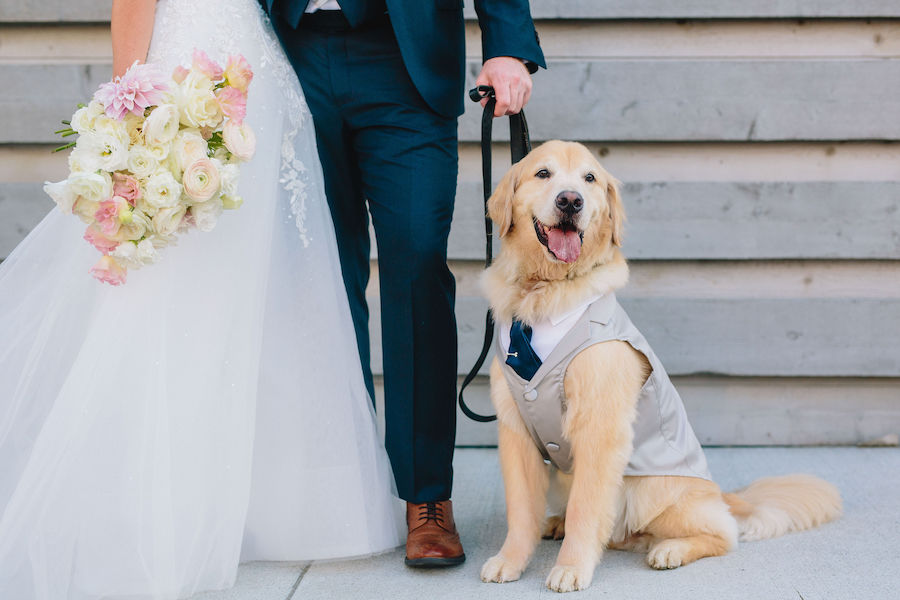 “[Auggie] is the light of our lives. We revolve our lives around him to a ridiculous point,” Christina says. “We’re pretty sure we’ve gotten through every argument we’ve ever had because he’ll just come up and lick us and then we can’t even remember what we’re upset about.” On their wedding day, their golden retriever pup walked down the aisle wearing a suit and tie that matched those of the groomsmen. 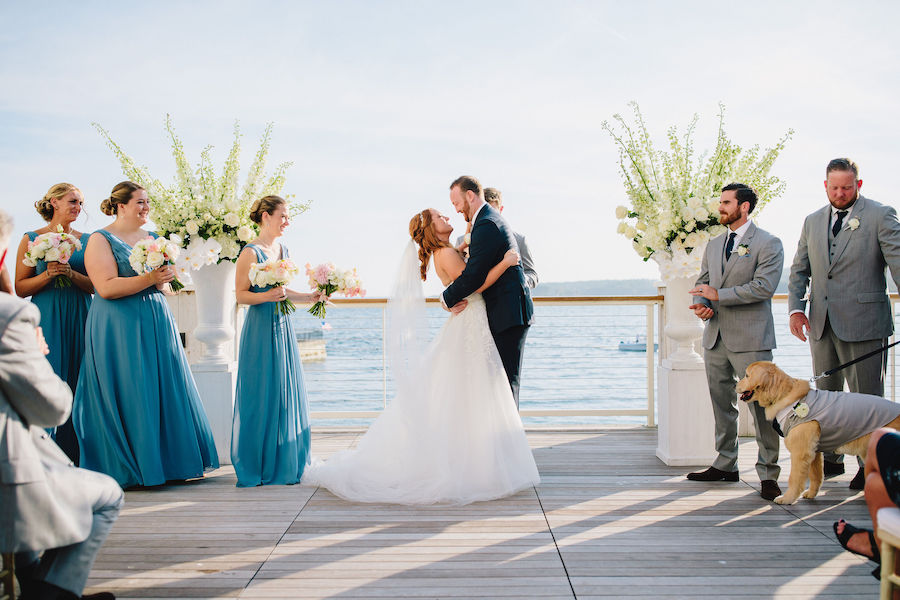 Christina’s younger brother, Tommy, officiated the couple’s waterfront ceremony. “We were a little worried because with Tommy things can either go really well or really poorly,” Christina says, laughing. “But we didn’t want it to be a religious ceremony and we didn’t want [our officiant] to be someone we didn’t know. We figured because of his excessive level of confidence Tommy would be able to do it.” 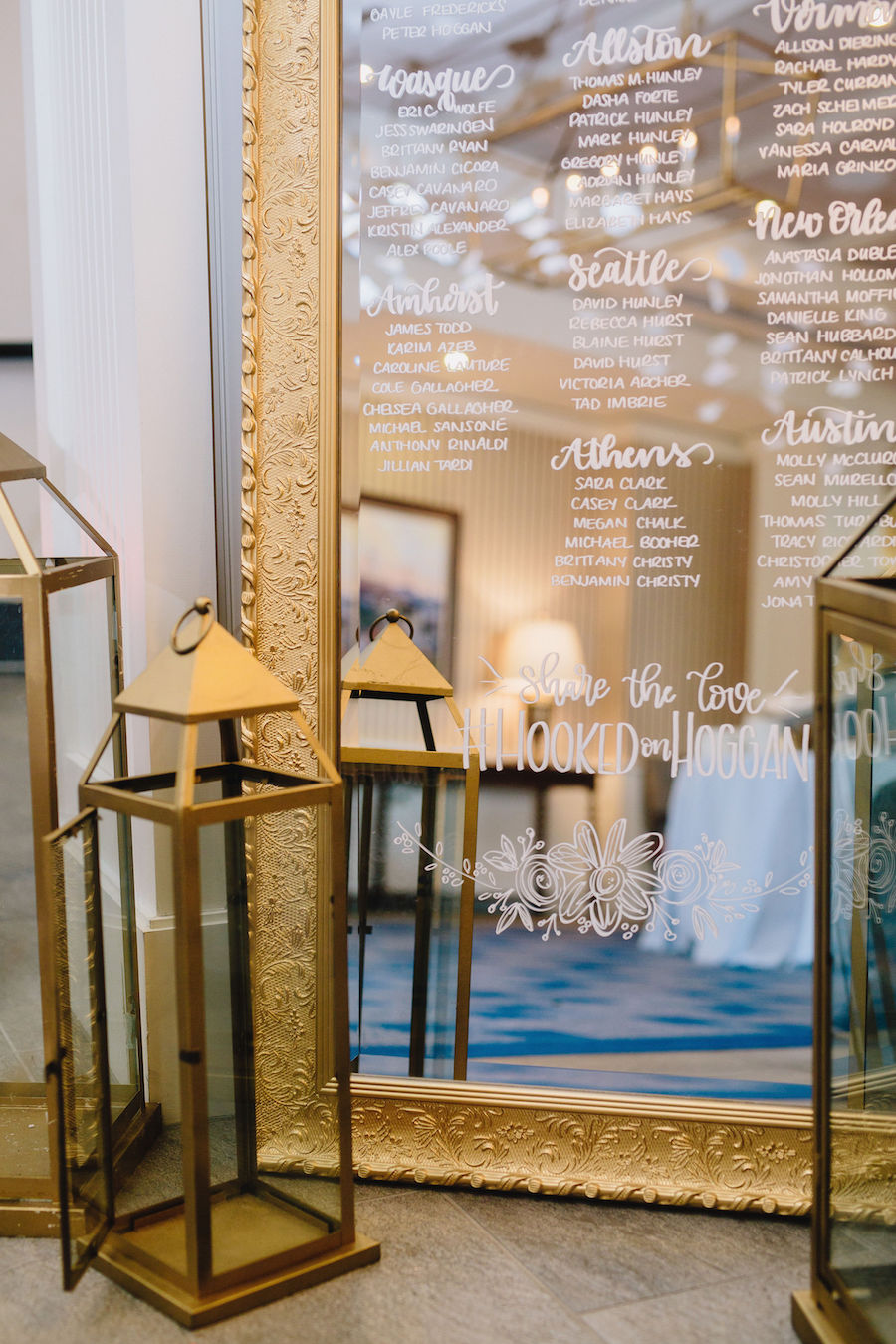 The bride liked the idea of incorporating a written seating chart rather than using escort cards because she thought it would be more eco-friendly. “It felt like [escort cards were] a waste of paper and I knew we could do it a different way,” she says. 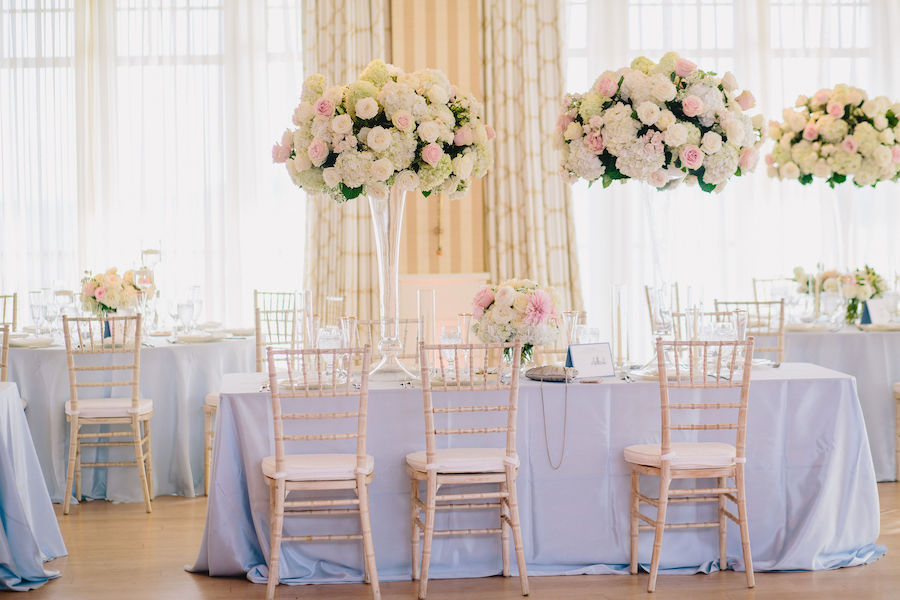 “I’d seen similar [floral arrangements] online and I loved the look of them,” Christina says of her centerpieces. “From going to weddings, I also knew that if you have the clear vases, and have them high enough, you can still see the people on the other side of the table. We wanted everyone to be able to chat and bond at our wedding.” 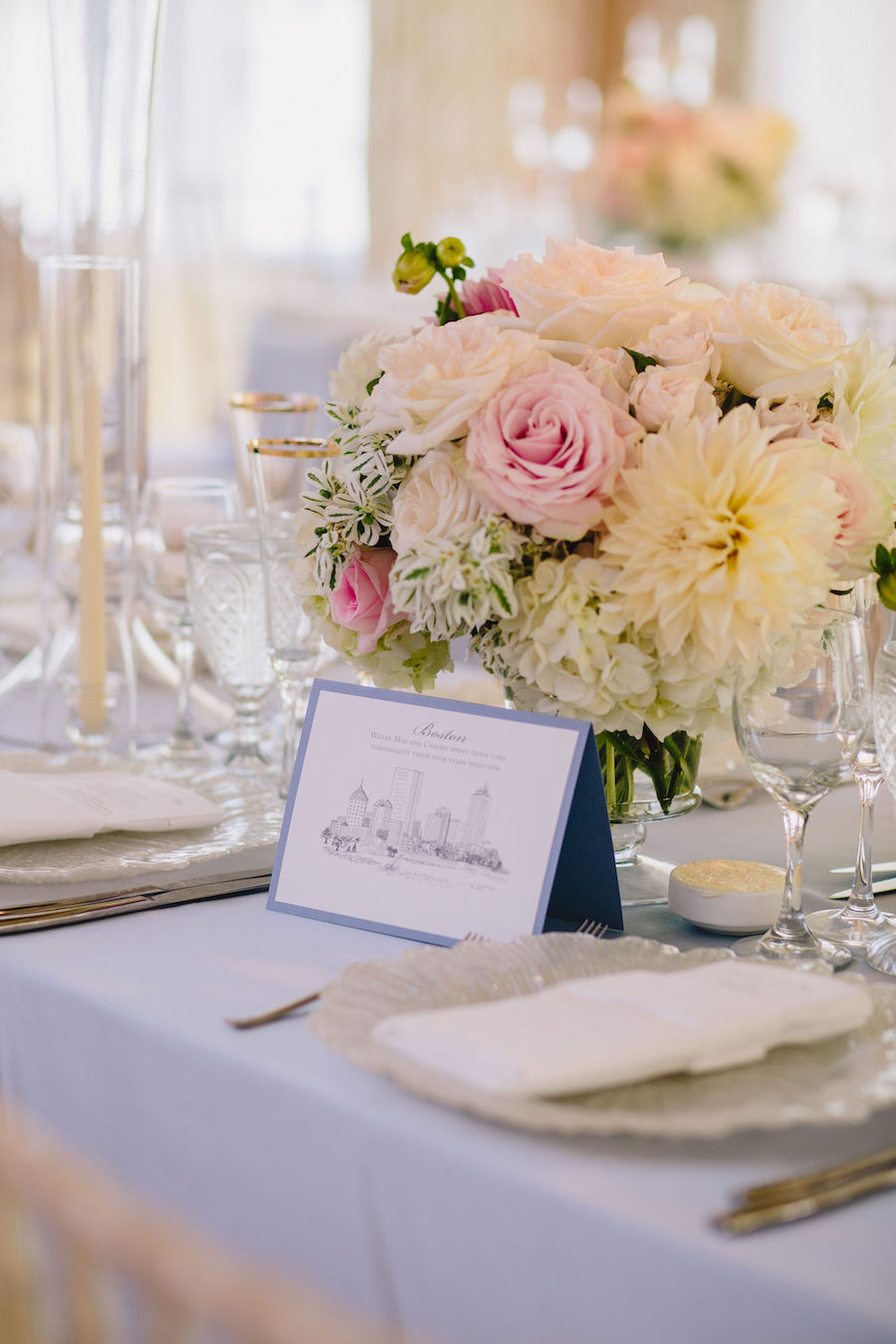 Instead of numbering their tables, the couple named each of them after cities where they had lived or traveled together. 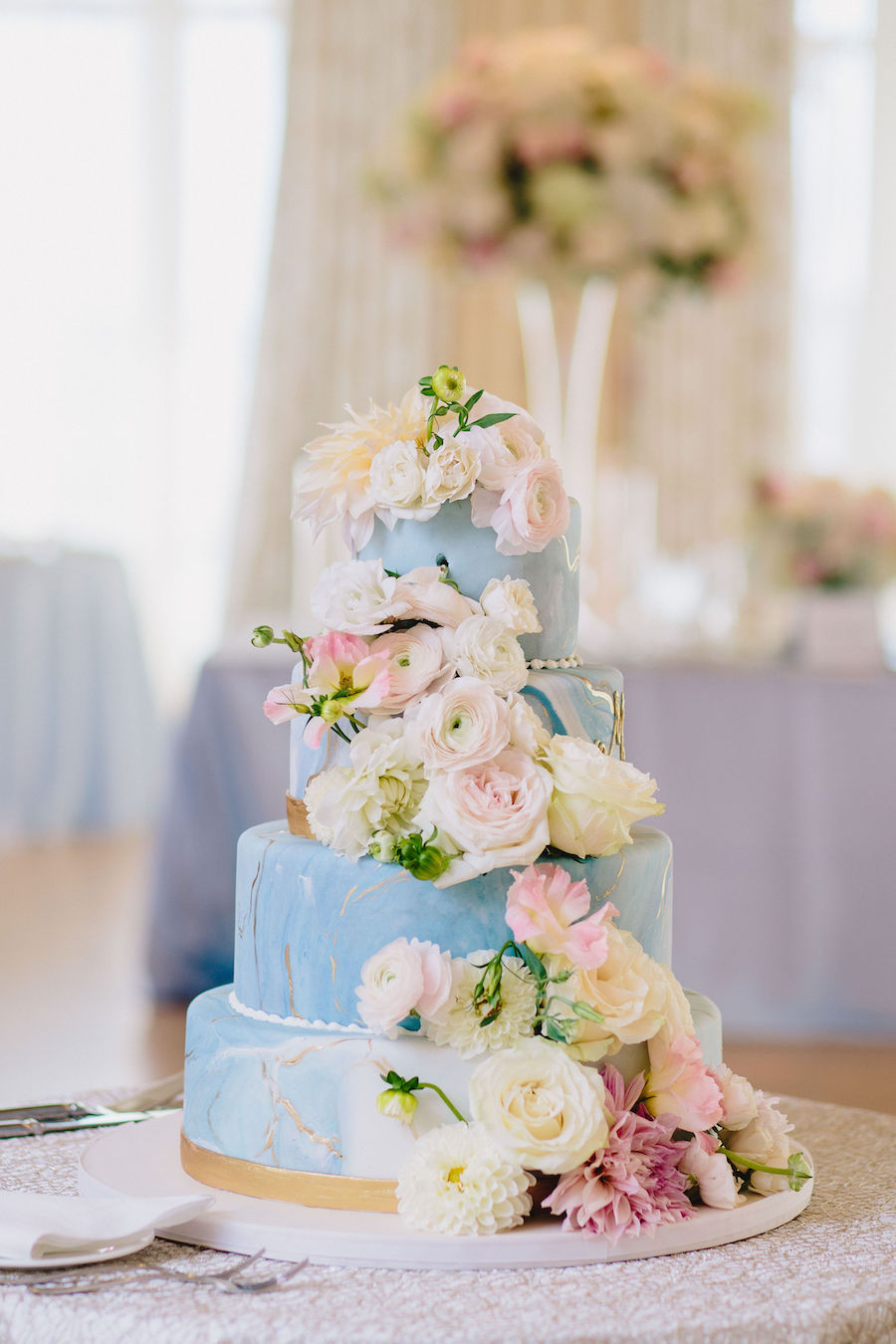 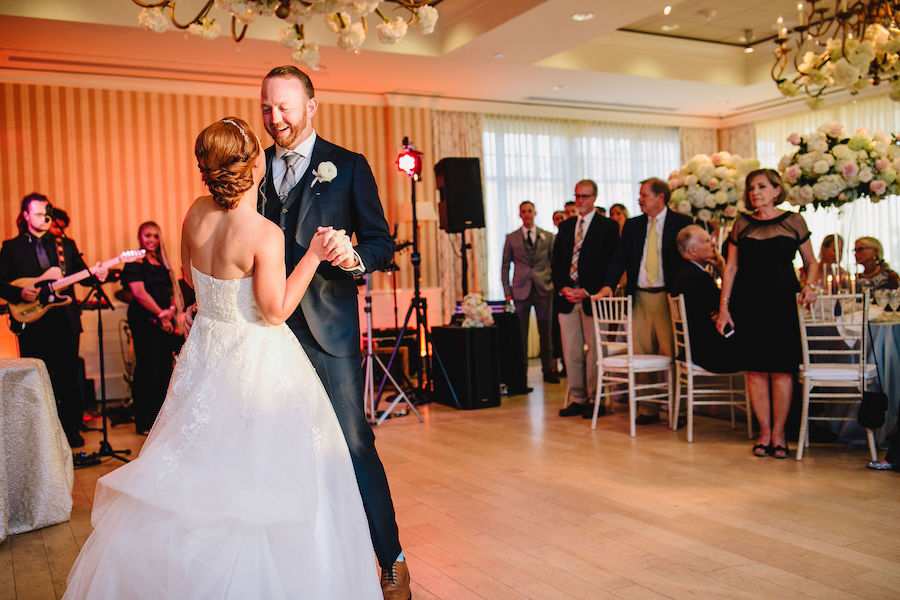 “The band, [Clique], was truly incredible. They kept everyone on the dance floor the whole night,” Christina says. For the couple’s first dance, Clique played “Yours” by Russell Dickerson.