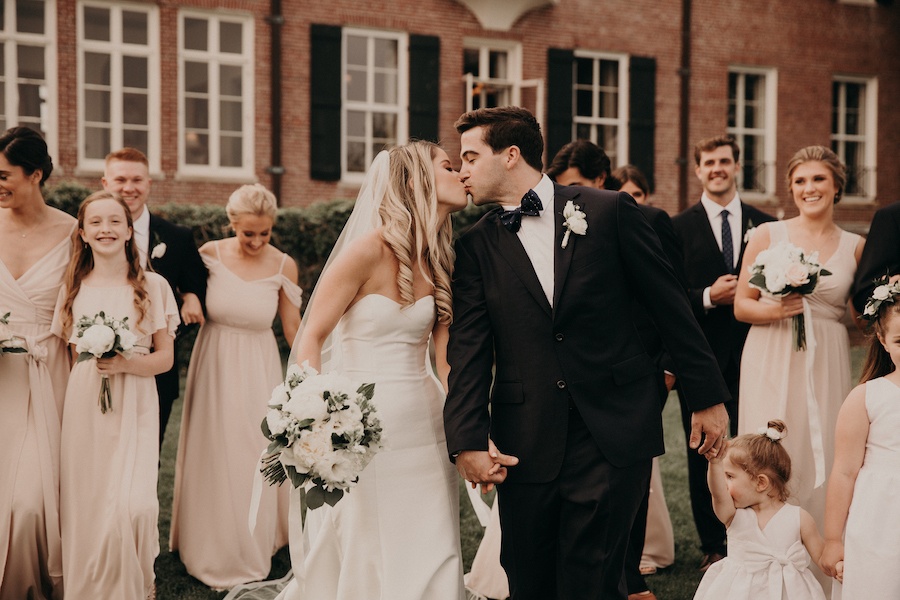 The night that Kate Bator first laid eyes on her future husband Jimmie Casaletto, she’d just spent the day in a bridal gown. The blogger and influencer known as Prep of Boston was working with her friend, photographer Catherine Threlkeld, on a styled bridal shoot, and afterward, they went went back to Catherine’s apartment. Catherine then texted Jimmie and invited him over without telling Kate, who she’d shown a photo of him to a year and a half earlier. “She’d said, ‘Are you single? I have someone I know you’ll like,'”Kate recalls. “I was like, ‘He’s cute but I don’t know what will come of this. Lots of people try to set up friends.'” When Kate and Jimmie finally met, Kate instantly “melted into the couch,” she says. “In my head I was like, ‘Oh my gosh, his pictures did him no justice. I would have sped this process up way faster,'” Kate says with a laugh. Jimmie asked her out right then and there. “It was very funny that I [had been] dressed as a bride and didn’t have my groom [in the photoshoot], but I found him that day,” she says.

After dating for three months, the couple moved in together on the North Shore. “Everything felt so right,” Kate says. “We always say ‘When you know, you know,’ and that’s totally what happened with us.” Six months later, Jimmie received Kate’s grandmother’s diamonds in the mail from her aunt. He planned to propose and told Kate that he made reservations for the chef’s table at Ledger Restaurant & Bar, one of the couple’s favorite spots. Then Jimmie’s sister, Lauren, asked Kate if she wanted to get her nails done with her the day before. Kate’s antennas were up, but once at the nail salon, her future sister-in-law threw her off the scent. “She said, ‘He loves you and thinks you’re the one, but I think he probably wants to wait [to get engaged] until he’s out of paramedic school,'” Kate recalls. She was certain that if he did propose, it probably wouldn’t happen at a restaurant. The next day, Kate and Jimmie were driving toward the Ledger when Jimmie pulled over in front of the Peddick Store House on Derby Wharf in Salem. Kate knew right away what was about to happen. “We always talked about how it’s a perfect location to put up a huge tent and have a wedding,” she says. They walked closer to the water and then Jimmie got down on one knee. “He didn’t actually ask me. He kind of cried and said ‘Let me just put this on your finger,’ and then I said ‘Yes,” Kate says, with a laugh. “Later on that night he was like, ‘Okay, let me say what I wanted to say.”

Ultimately, even though they both loved the spot where Jimmie proposed, the couple says they quickly realized it would be easier to tie the knot at a more traditional venue that had bathrooms and a kitchen. Jimmie had a boat in Salem, and they would often pass by a beautiful brick estate perched above the sea while they sailed around Massachusetts Bay. “We’d turn to each other and say ‘When we get engaged we need to look up if that’s an Airbnb,'” Kate says. As it turns out, the mansion was a wedding venue: Misselwood at Endicott College. “We fell in love on the water on Jimmie’s boat and at my summer house. So we were like, ‘Okay, this is the place,'” she adds. The couple planned an oceanfront ceremony and classic-chic tented reception for May 31: the day they first said ‘I love you’. “I said it 30 days [after we started dating] because I’m crazy, but like I said, when you know you know,” Kate says. 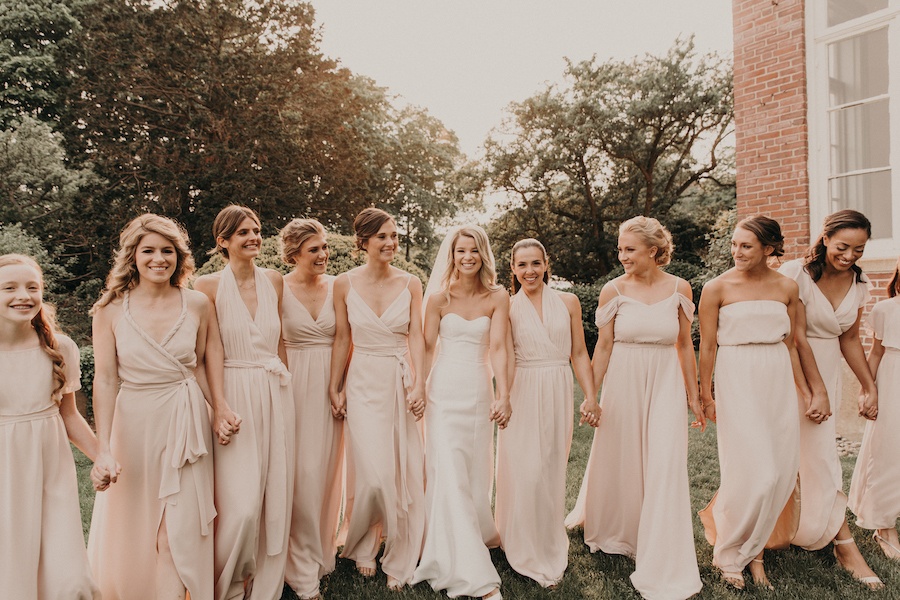 Kate’s bridal party donned Joanna August gowns in a beige-blush hue for the couple’s big day. “I love how the sun and sky and people’s skin tones really pop with neutrals,” Kate says. 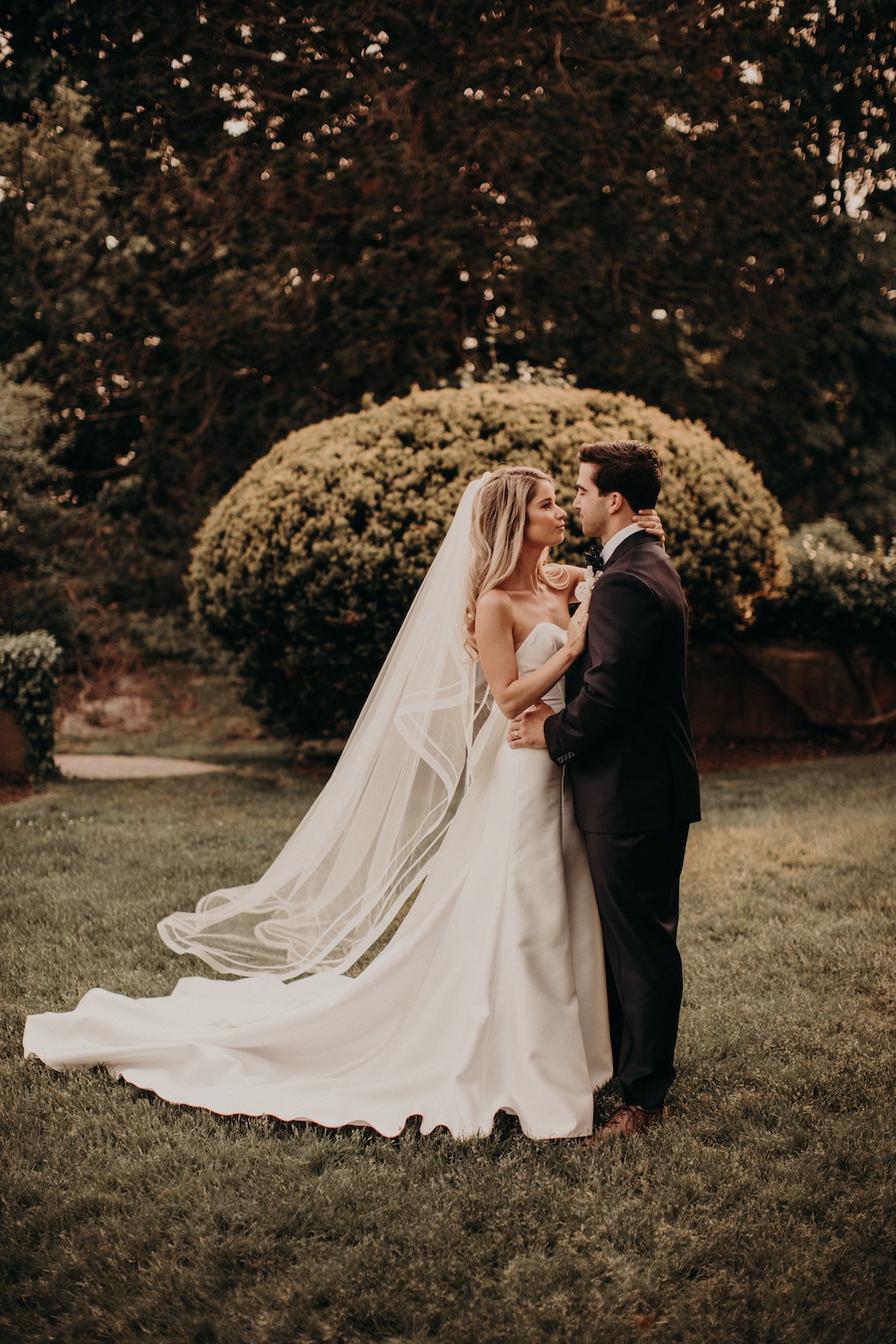 “Picking out my wedding dress was super easy because I’ve been a bride in styled shoots over 12 times. I knew I didn’t want to [wear] anything that I had worn before and that I wanted it to be super simple,” Kate says. The bride opted for a strapless Wtoo gown from Flair Boston and had it tailored to extend the train by 18 inches. 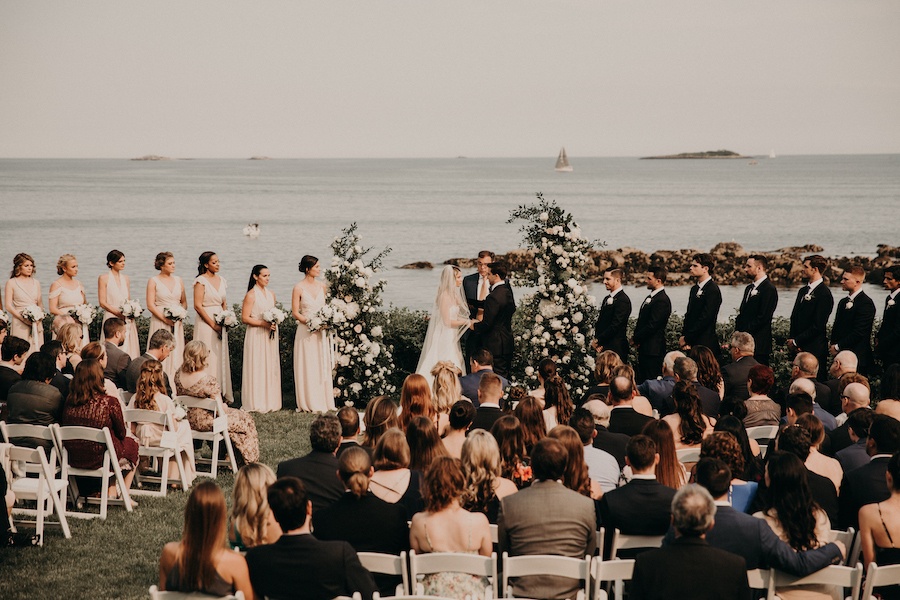 Kate and Jimmie tied the knot under an asymmetrical partial floral arch designed by Whim Events. Jimmie’s uncle Jimmy, after whom the groom was named, officiated. “It wasn’t even something we thought about,” Kate says. “I remember right after we got engaged Jimmie said, ‘So my uncle is marrying us?’ and I was like, ‘Oh yeah.’ He’s someone we both look up to.” 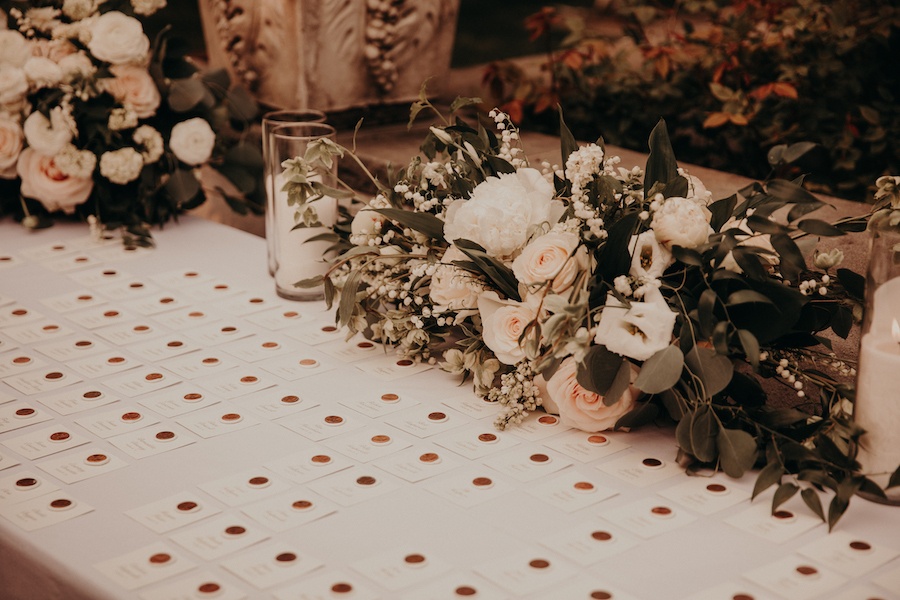 The courtyard at Misselwood estate features a stone fountain, so Cristen & Co.’s Cristen Faherty and the Paper Perfectionist created escort cards affixed with a penny that guests could pull off and toss into the fountain to make a wish for the couple. 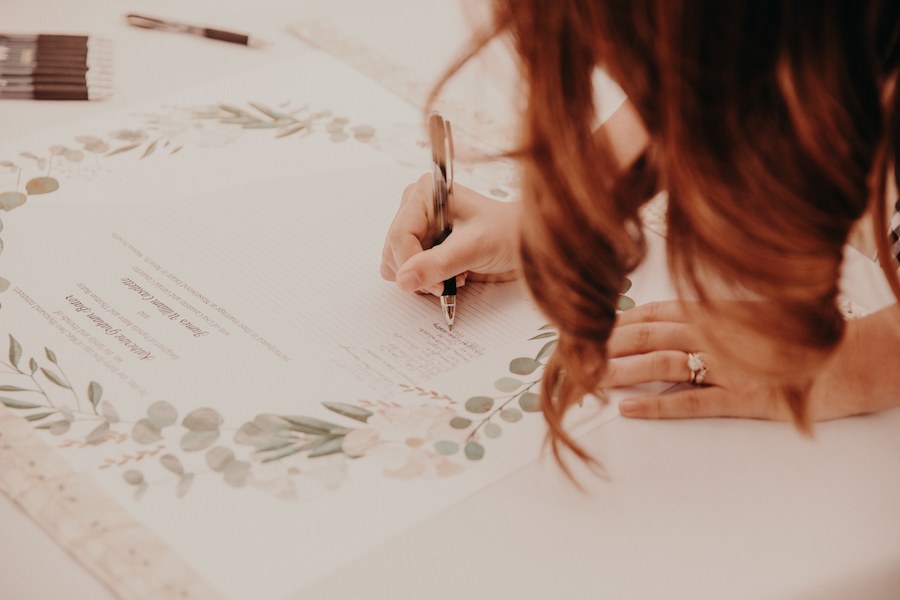 Kate’s grandmother, who wasn’t able to attend the wedding, is Quaker, so as a tribute to her the couple asked their guests to sign a Quaker marriage certificate rather than a guestbook. 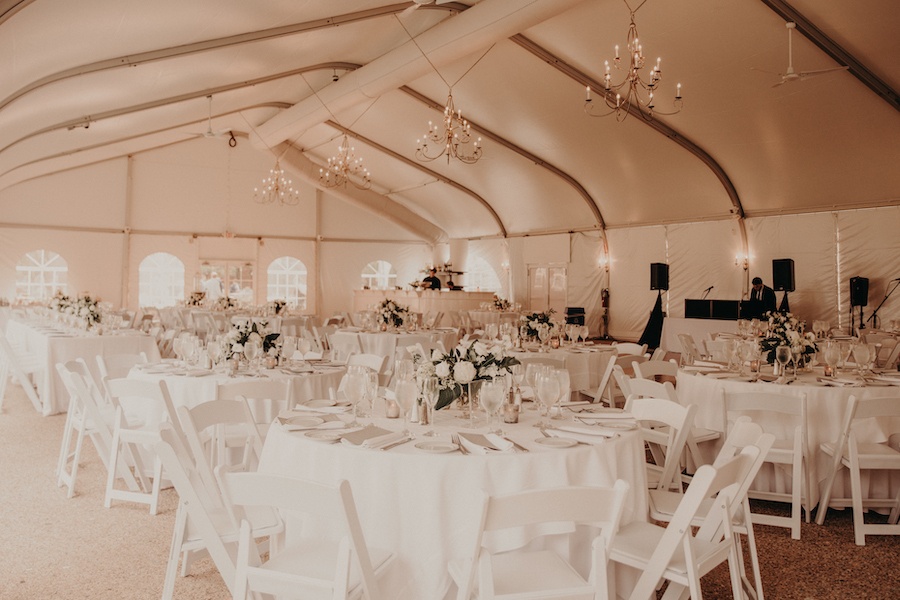 When they started planning, the bride and groom told Faherty that they wanted their wedding to be completely classic. “I wanted to look back on these photos in many years and just know that [our wedding] was traditional and romantic,” Kate says. 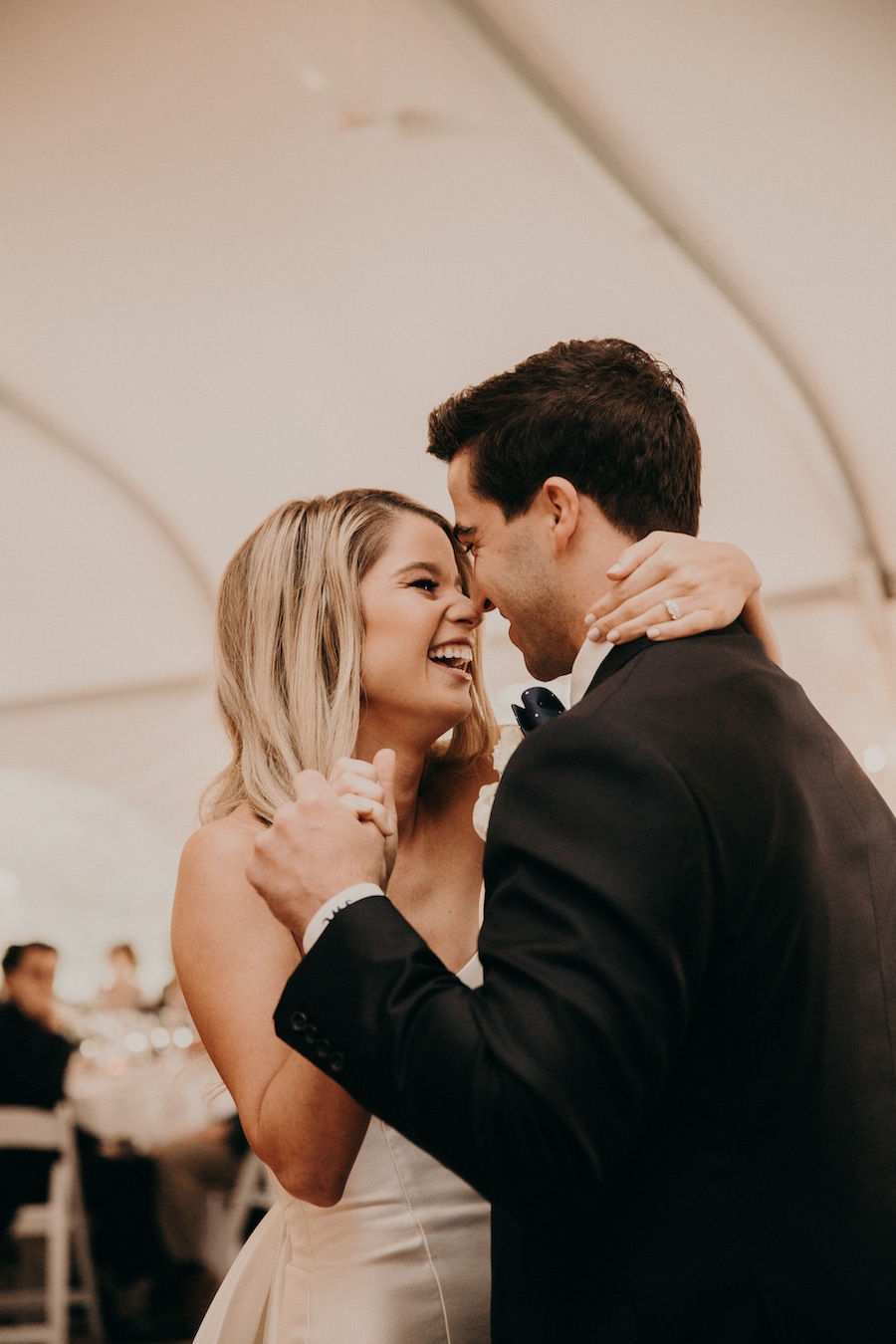 For their first dance, Kate and Jimmie took the floor to “Two Blue Eyes” by Tall Heights, and Jimmie’s sister Lauren and her husband Bobby surprised the bride and groom by inviting the band to perform the song live at the wedding. 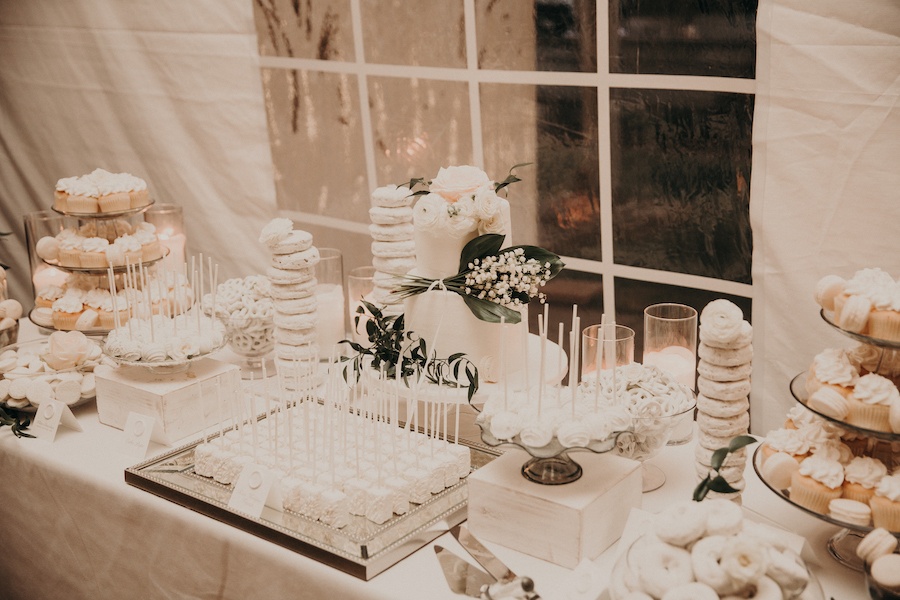 “It was insane,” Kate says of the dessert table at the reception. “It wasn’t just pretty; everything was so good, too.” The table featured homemade Rice Krispies treats, doughnuts, cake pops, a petite funfetti cake, and other sweets. 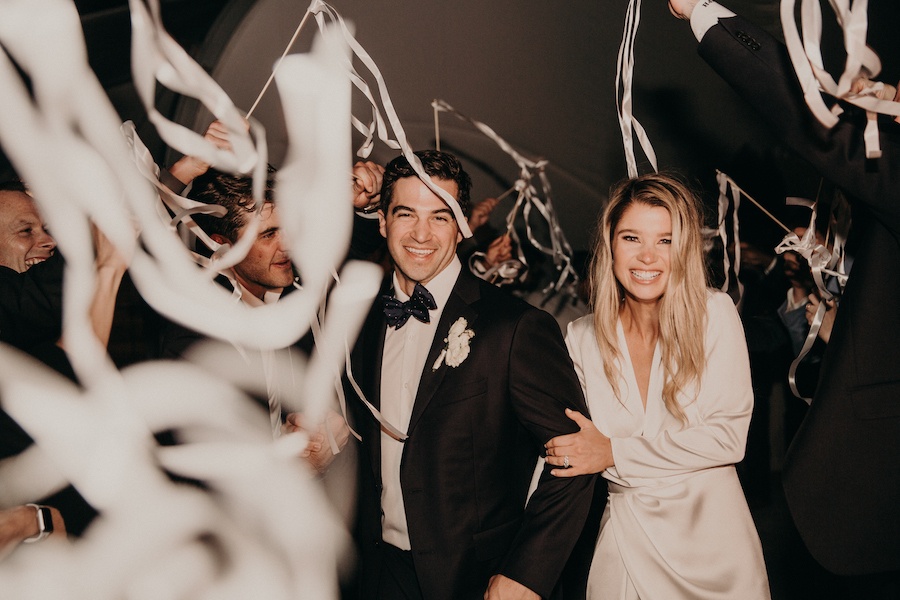 Before Kate’s dad drove the couple to their afterparty, they passed through a ribbon-filled send-off line. “We felt like we were movie stars,” says Kate, who changed into a long-sleeve gown from ASOS for the latter part of the night. “The photographer was in front of us flashing the camera so we couldn’t actually see where we were going, so it felt like we had paparazzi. And there was just so much love. It was awesome.”