After a Trip to Italy, This Couple Planned a Tuscan-Inspired Wedding at Live Well Farm in Maine

"We wanted to recreate that ambiance, the feeling of family and friends and tradition," bride Alex says. 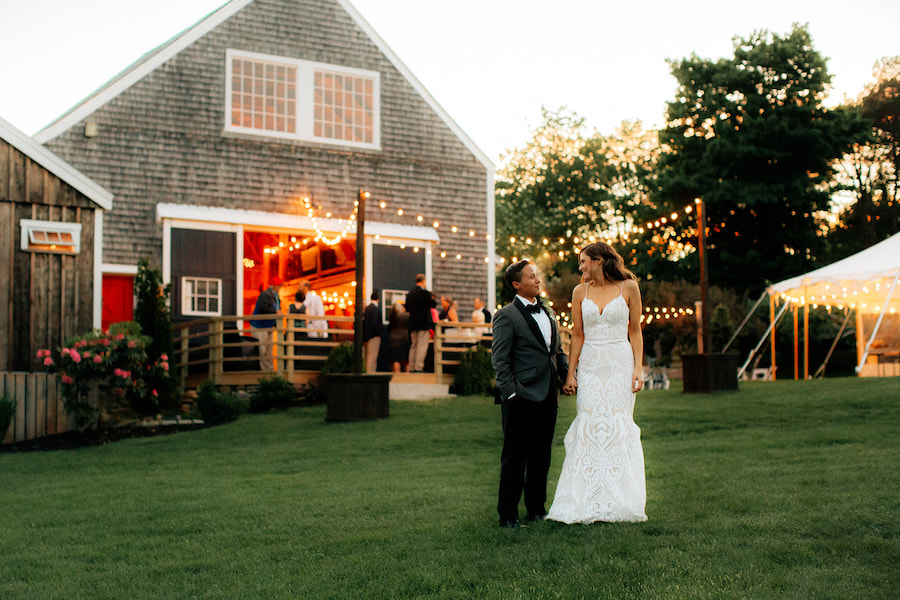 It was a workplace romance that brought Alex Silva and Gabi Samaniego together in 2010. After they both began jobs at an Applebee’s in Florida, the pair quickly became friends and started spending time together outside of work, even once talking until 6 a.m. before an 8 a.m. shift. “That was it,” Gabi says. “We’ve hung out every day since.” The couple had been dating for about a year when, in February 2012, Gabi began plotting a proposal. She went ring shopping with Alex’s best friend Lily, and once she’d found the perfect rock she planned to leave it at Lily’s mom’s house. When they were at the house, though, Gabi realized she couldn’t wait to pop the question. “We were all looking at [the ring] and I was just kind of shaking. I was like, ‘Oh this is kind of serious now,'” Gabi recalls. So instead of delaying, she brought the ring with her to dinner that night with Alex, Lily, and Lily’s family and asked Alex if she wanted to get married. “We were all just having dinner. I wasn’t expecting it,” Alex says. “It was like in the movies where someone proposes and everyone claps in the restaurant and celebrates with you. It was a really special moment.”

The couple chose to postpone getting married while Alex finished up nursing school, but in March 2018, while they were in the process of buying a home, they realized they were ready to make things official. That month they tied the knot in Alex’s mom Cathy’s house, with Cathy as their officiant. “Alex came home late, had a glass of wine, and said, ‘Let’s do this’ in her scrubs,” Gabi says with a laugh. “We had a little cake. It was very us.” Still, the rest of their friends and family “wanted to show their love and support,” Gabi says, and that ultimately motivated the couple to throw a larger, more formal wedding later that year. They were in Maine at Alex’s family’s house for Christmas when Alex’s uncle Brett asked when they were going to start planning. “I kind of just moonwalked away,” Gabi says. “But he took the bull by the horns and said, ‘We’re looking at venues. Finish your coffee and let’s go.'” They found the perfect spot for their wedding at Live Well Farm, an 1840 farmhouse set on five acres of land on the Maine coast, which the couple felt was the perfect location for their Italy-inspired celebration. They’d traveled to the country together the summer before, and—with the farm’s trees reminding them of Tuscany—they could envision a traditional family-style meal served under a tent on the grounds. “We wanted to recreate that ambiance, the feeling of family and friends and tradition,” Alex explains. “When we walked into Live Well, those things just aligned.” 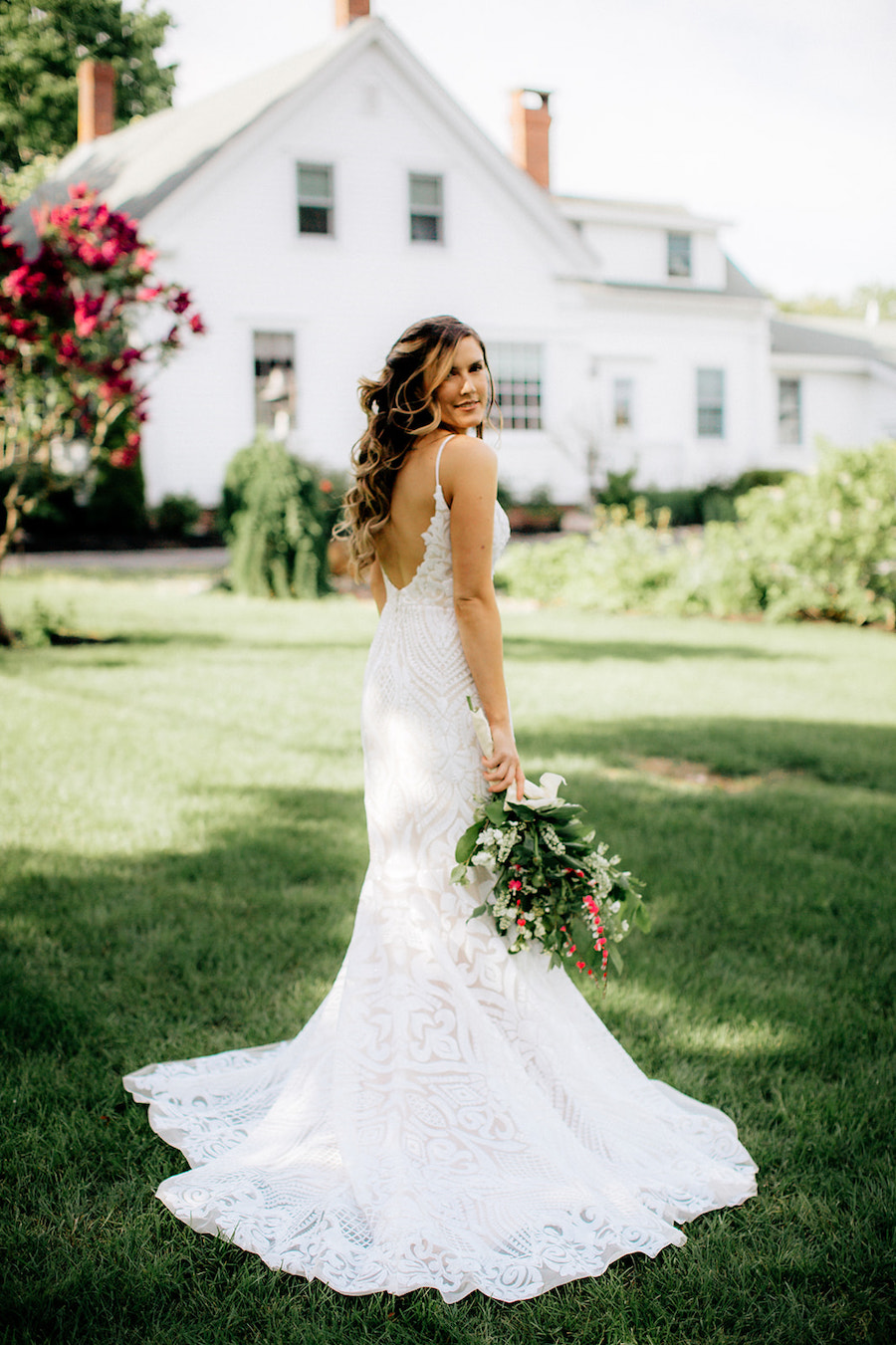 When she began shopping for her wedding dress, Alex says she initially thought she wanted a “poofy ballgown,” but once she put on this Hayley Paige fit-and-flare, “it just all came together.” 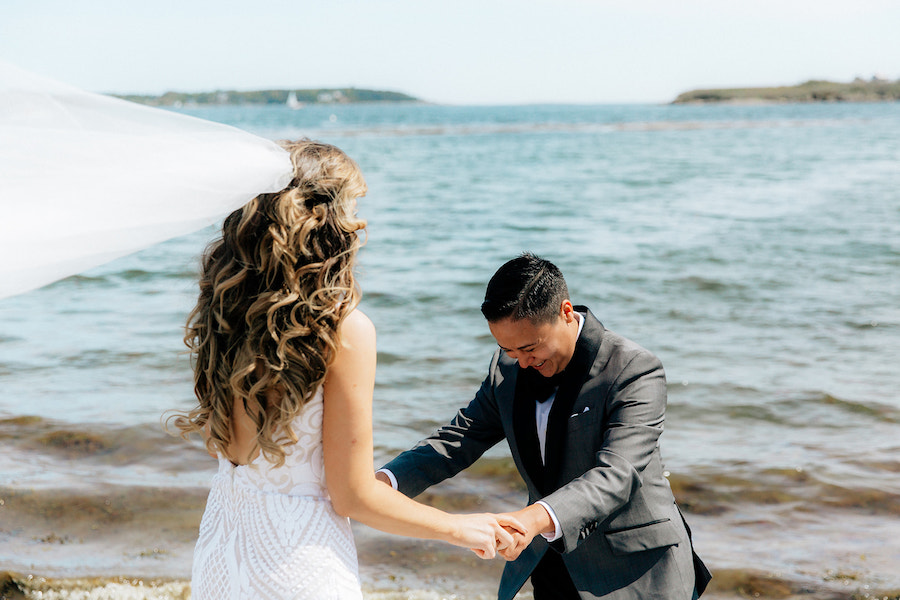 One of the most memorable parts of the day for Gabi was the first look. “[Our photographer Cassandra] had me stand facing the ocean. I knew Alex was going to come up behind me and I was so excited,” Gabi says. “When she tapped me on the shoulder, I turned around and it was one of my favorite things in the world to see her look that beautiful.” 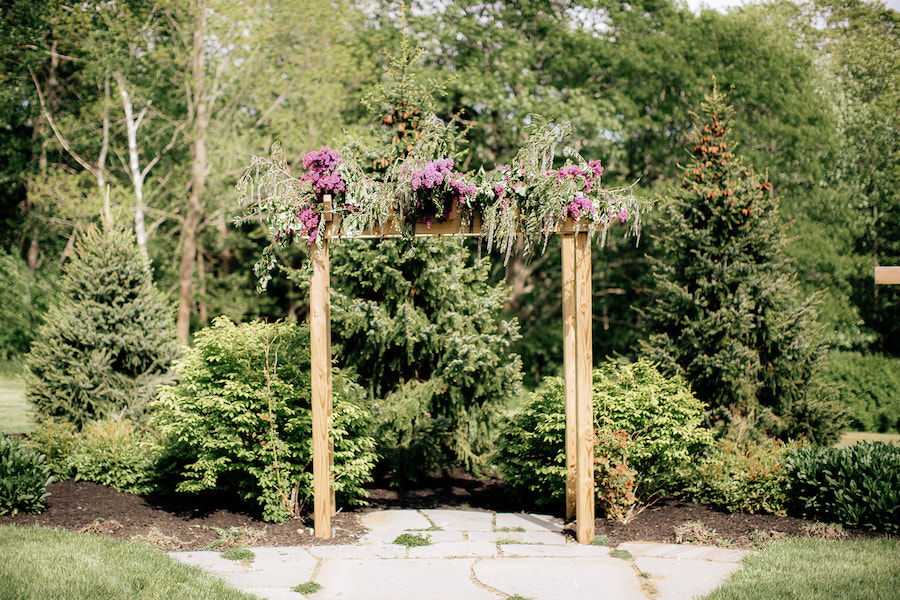 Alex’s uncle Brett, an interior designer, put together the foraged floral arrangement that adorned the ceremony arbor at Live Well Farm. “I just handed over the reins and said, ‘Do your thing,'” Alex recalls. 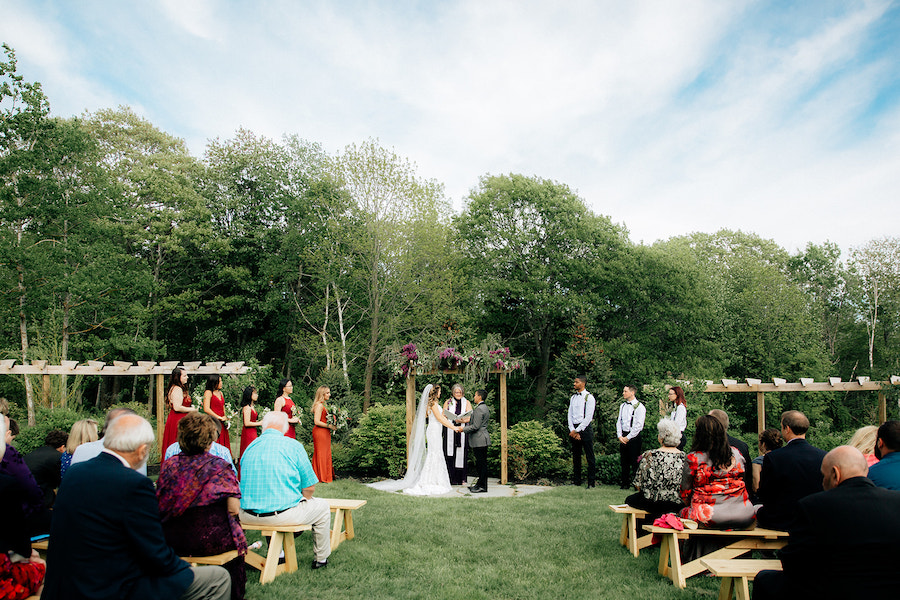 Alex’s mom Cathy officiated the couple’s ceremony. “We thought it was really fitting since she was the one who did it [the first time],” Gabi says. “And obviously she’d known us the whole time and she’s seen our growth. It was great to have her be able to plug in those intimate details that another officiant wouldn’t have been able to.” 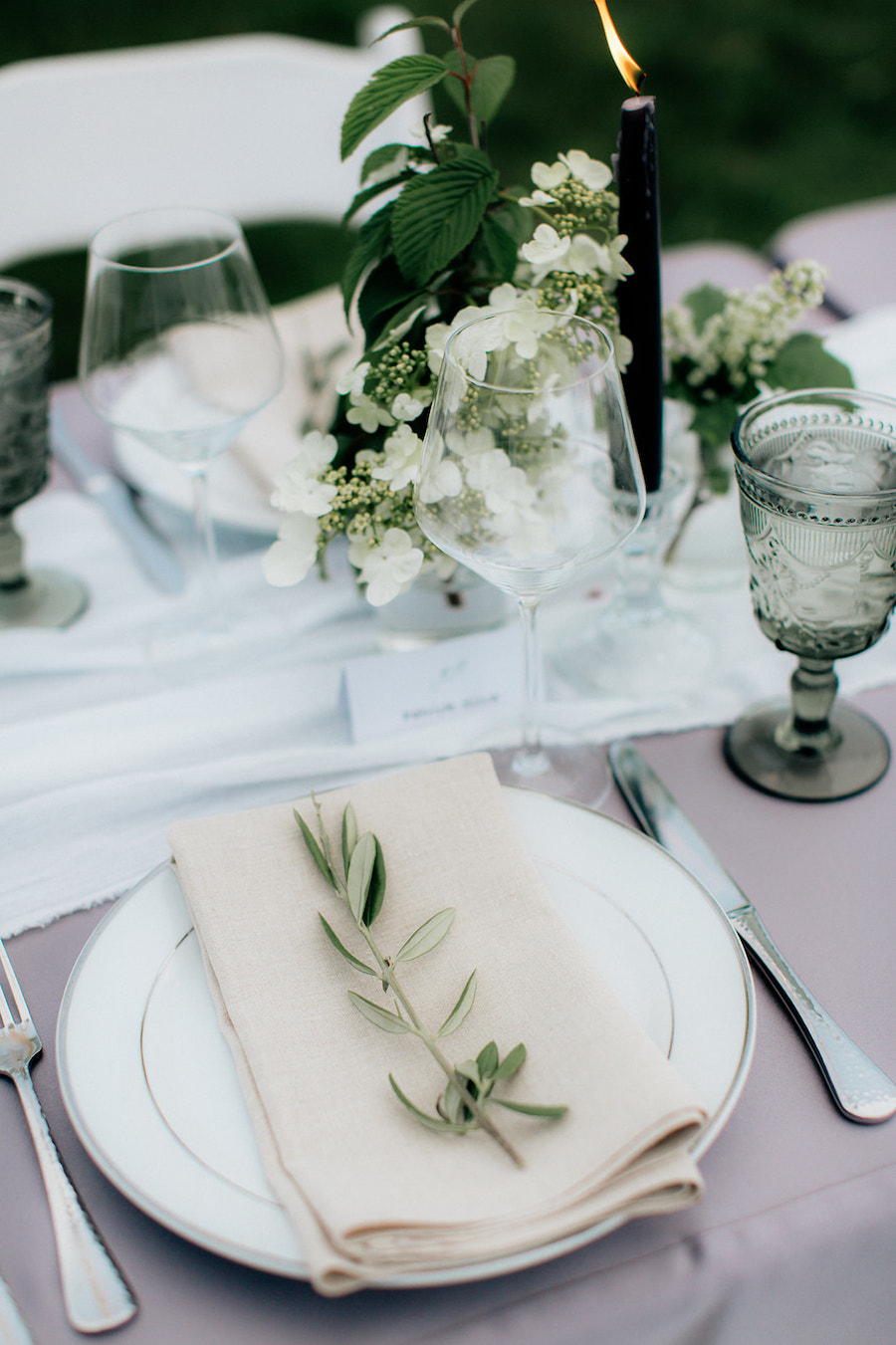 “I really wanted our [tablescapes] to be simple but elegant,” Alex says. The couple dressed up the two long tables under their reception tent with gray linens, gray frosted goblets, and black candlesticks. 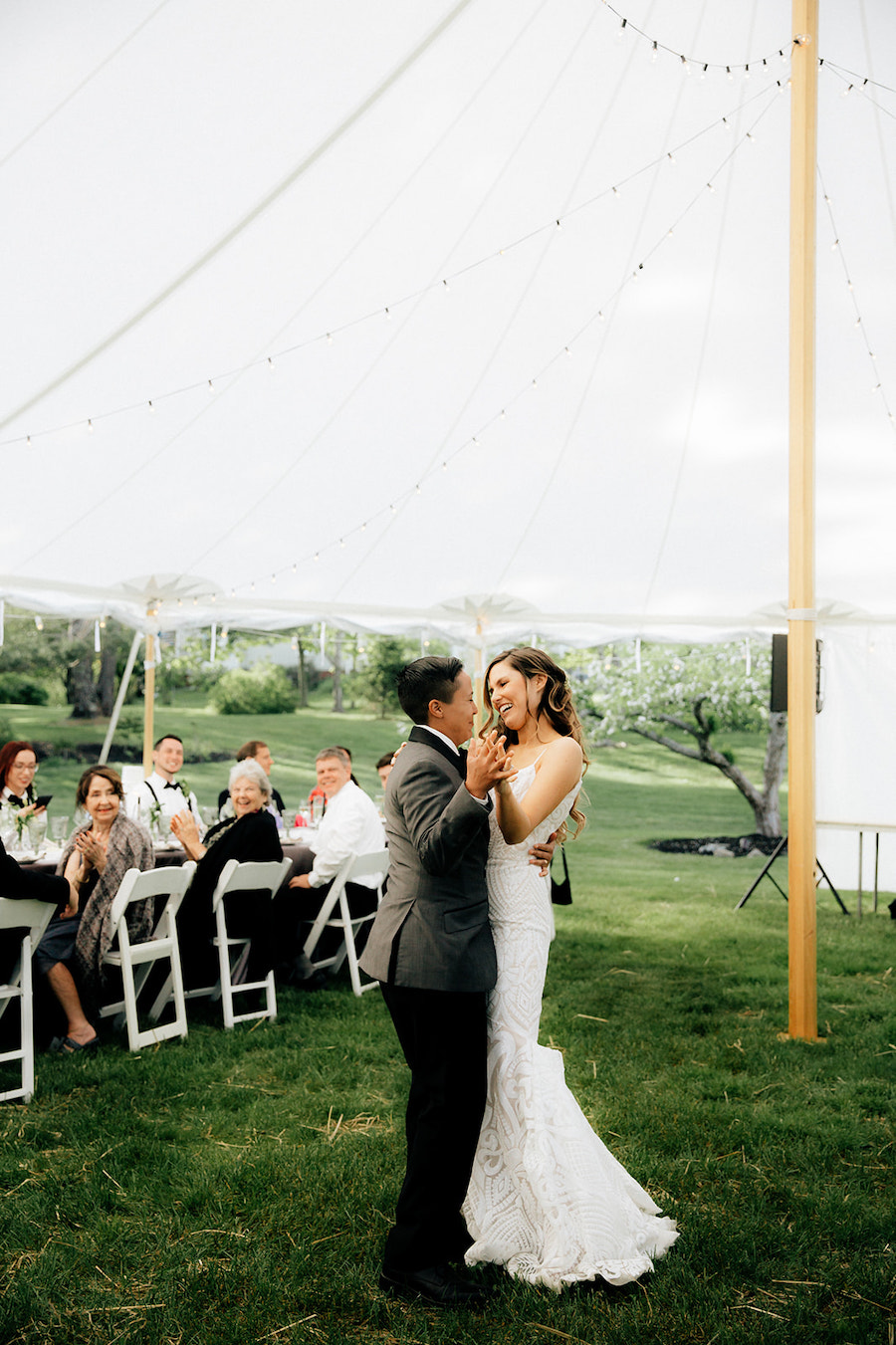 Alex and Gabi had their first dance to “May I Have This Dance” by Francis and the Lights. “It was a really good representation of our entire relationship through the hard stuff, the good stuff, the great stuff, and the bad stuff,” Gabi explains. 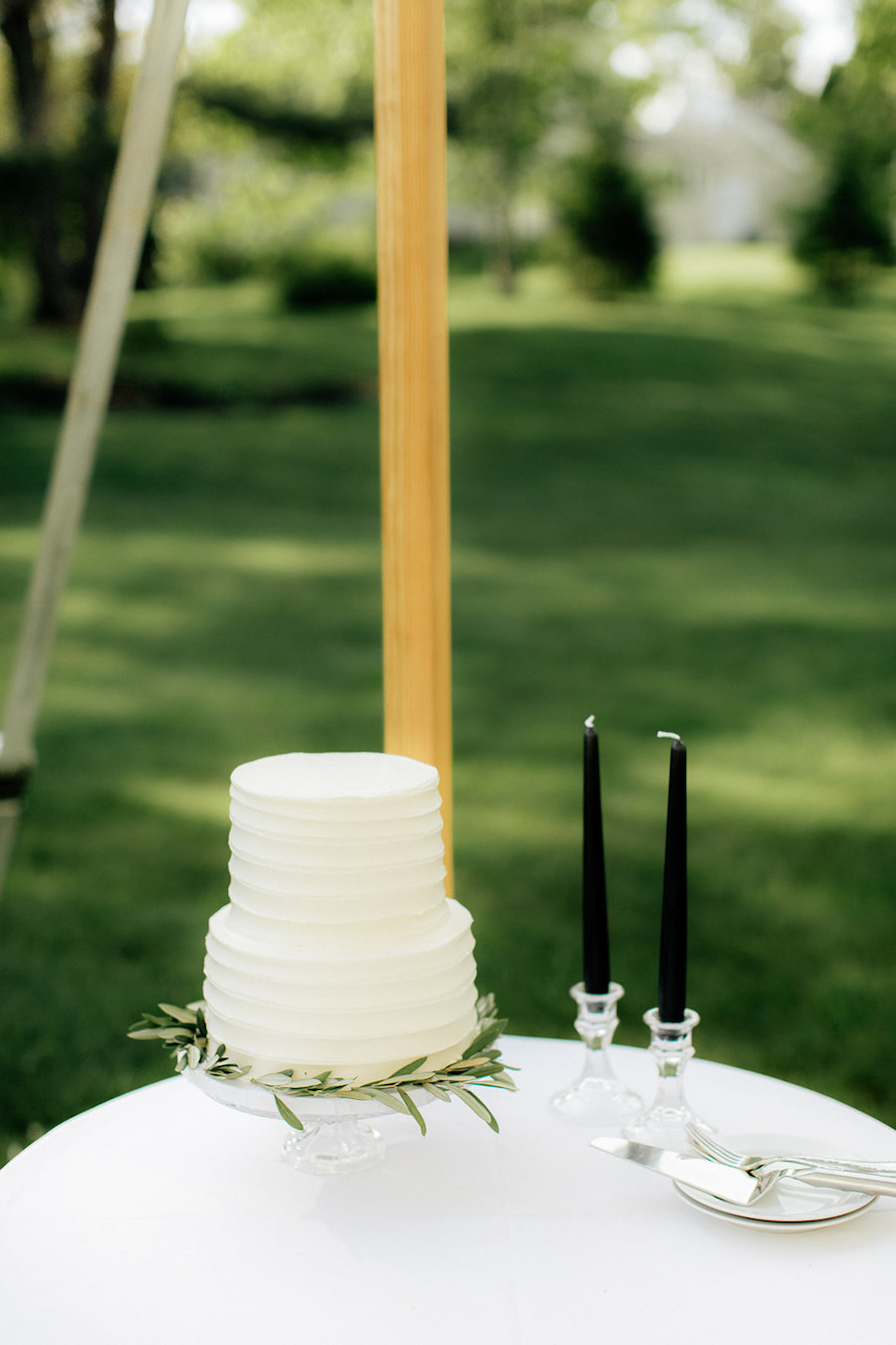 Alex’s grandmother, Cecil, who has traveled to Italy many times, selected and gifted the couple their white wedding cake which featured limoncello buttercream. 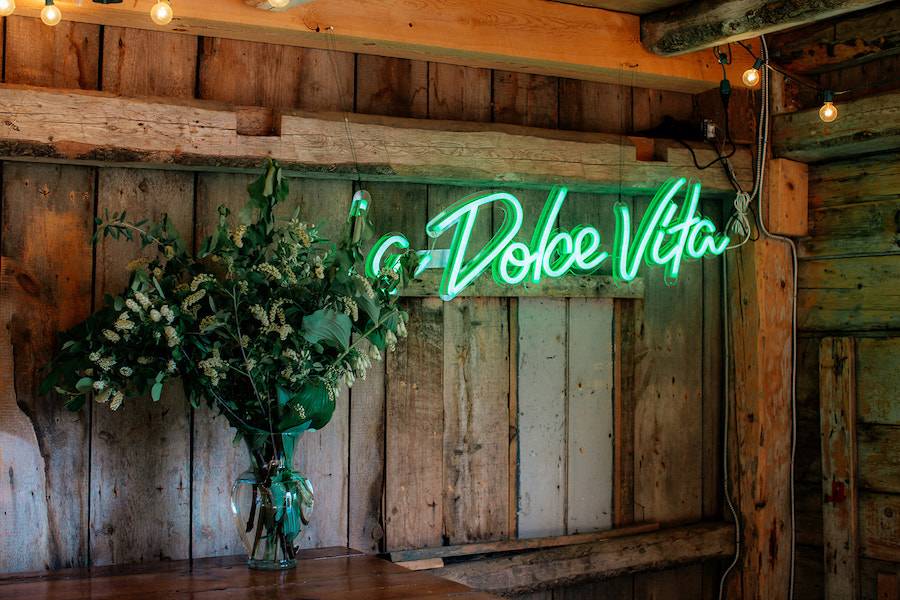 In the barn, where the dancing portion of the evening took place, Alex and Gabi hung a neon sign that read “the sweet life” in Italian. “That was really what we wanted to revolve the whole wedding around,” Alex says. “The feeling that you feel in Italy really is the sweet life. It’s about taking your time, enjoying the food that’s in front of you, enjoying your friends and your family, and living in the moment.”