And the bride's bouquet? Beyond breathtaking. 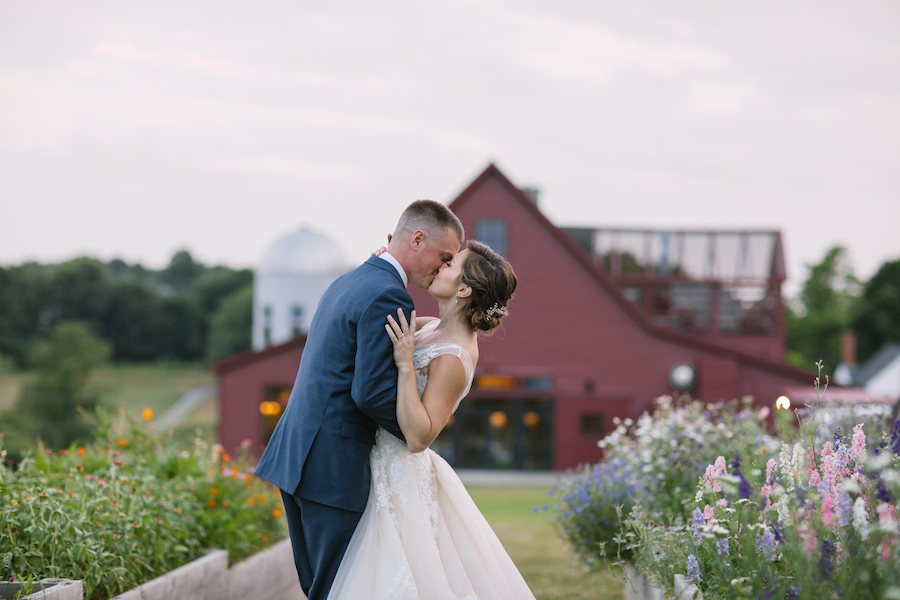 Sarah Johnson and Nick Giorgio go way back: They grew up together in Needham, and became friends during high school. The pair stayed in touch throughout the years after graduation, reconnecting when Sarah moved back to the area in 2011. “We were just chatting and then we were like, ‘Let’s get together and go out,'” Sarah says. Shortly after, they met up at Cityside Bar in Brighton. “We just hit it off and it felt really natural,” Sarah recalls. Their relationship blossomed over the next few years, and the two eventually got a dog together as well as a house. “They say a mortgage is just as permanent as a marriage,” Sarah says with a laugh.

For Sarah’s birthday in 2016, Nick planned a trip to Nantucket, where Sarah had spent many summers with her family while growing up. They rented a car to drive out to the western tip of the island and walked out onto the beach. “There was literally no one there and it was a beautiful day,” Sarah says. Nick suggested that she walk along the shoreline so he could take her picture. “I started walking, and then kept walking, and then I was like, ‘Okay are you taking the picture? What are you doing?'” Sarah recalls. When she turned around, Nick was down on one knee. “He 110 percent surprised me,” the bride says. “I think I said nothing—I was just squealing. It was a really special moment.”

When the couple began planning their celebration, the self-described “foodies” wanted to give their guests a meal that they’d rave about for years to come. Custom menus featuring local and sustainably sourced ingredients attracted them to the Barn at Gibbet Hill—not to mention the Groton venue’s rolling green hills and grazing cattle. “It’s just so beautiful, you don’t have to add a lot to it to make it so stunning,” Sarah says. “The gardens and the cows and all that are a big selling point.” At the end of the day, though, Sarah says she and Nick “aren’t flashy people” and their chief priority was bringing together their extended families to have a good time. “You never really have the opportunity to have all the people you love in one room,” she explains. “Hands-down, both of us would say that definitely was the highlight.” 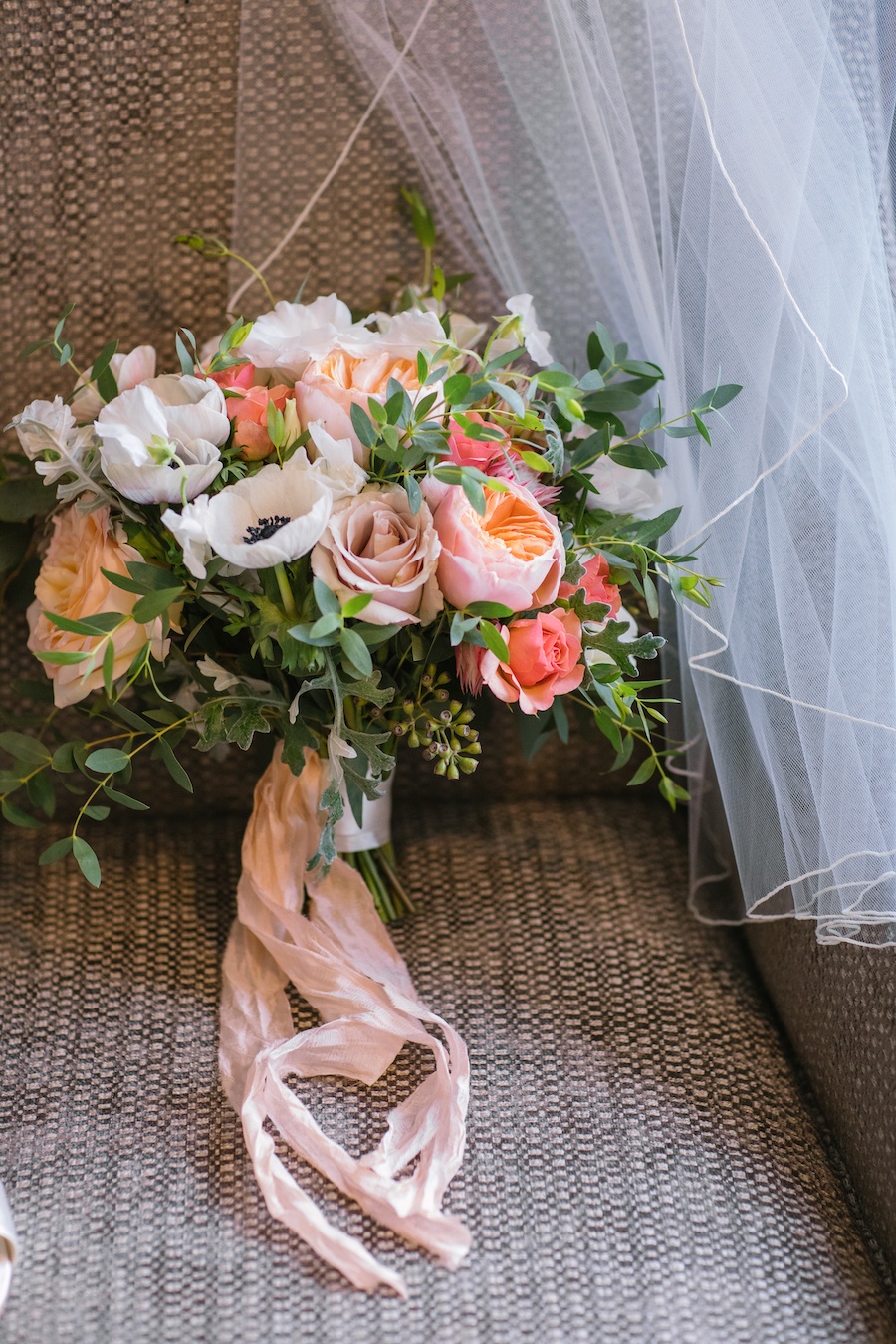 “I was so impressed with how little direction I needed to give [our florists] for them to create something that was exactly what I envisioned,” Sarah says. “The only direction I gave them was, ‘I want a big bouquet, and I want a variety of flowers in it.’ They absolutely did that and it was stunning.” 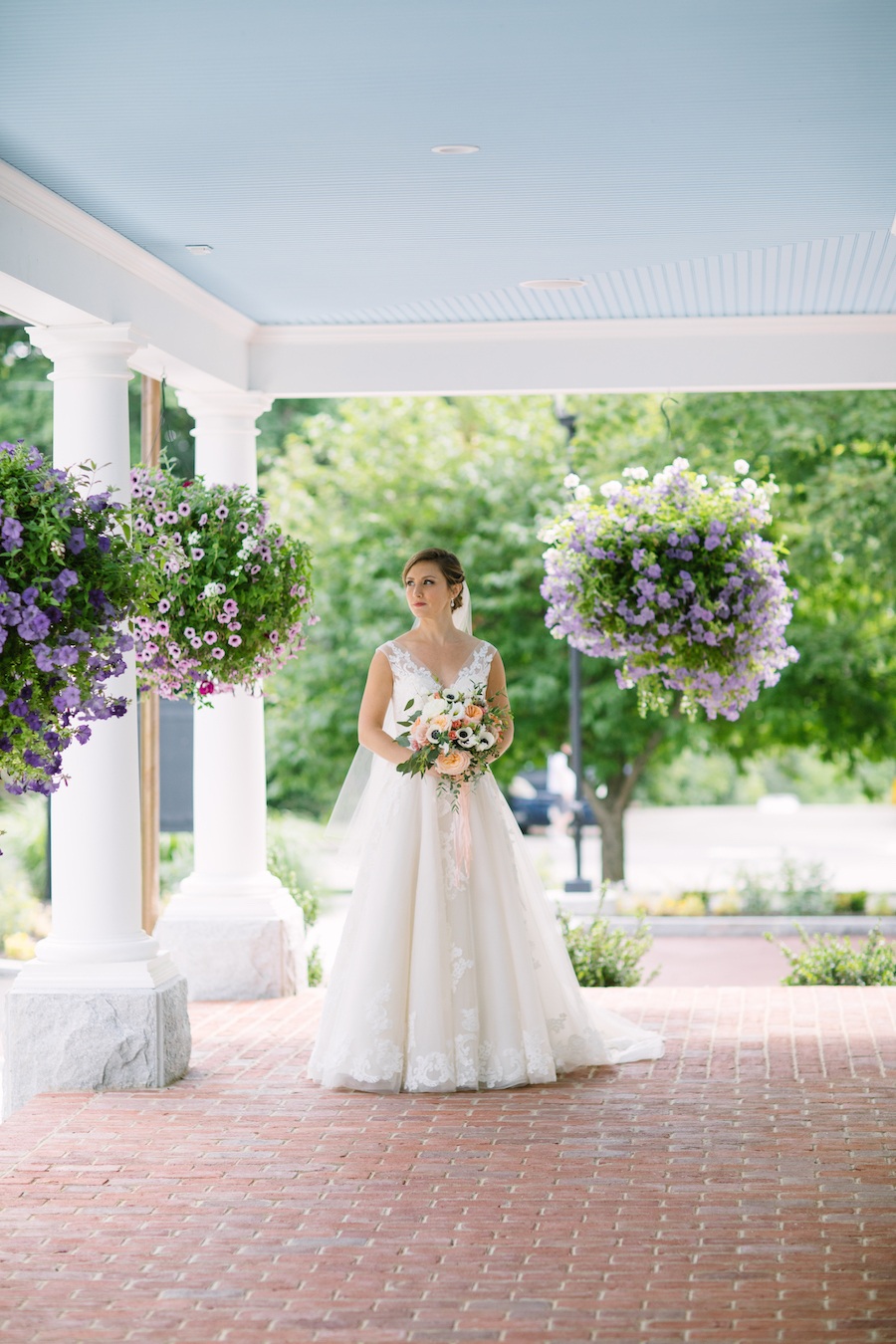 “I originally wanted something that looked nothing like the dress I ended up with,” Sarah says. The bride visited several salons and tried on multiple simple, strapless gowns, but continued to walk away empty-handed. When she visited Precious Memories Bridal Shop in Malden, though, her consultant suggested she try on a very different style by Maggie Sottero. “I came out in it and right away I was like, ‘I’m buying this dress,'” Sarah explains. “I just loved how I felt in it—and my mom started crying.” 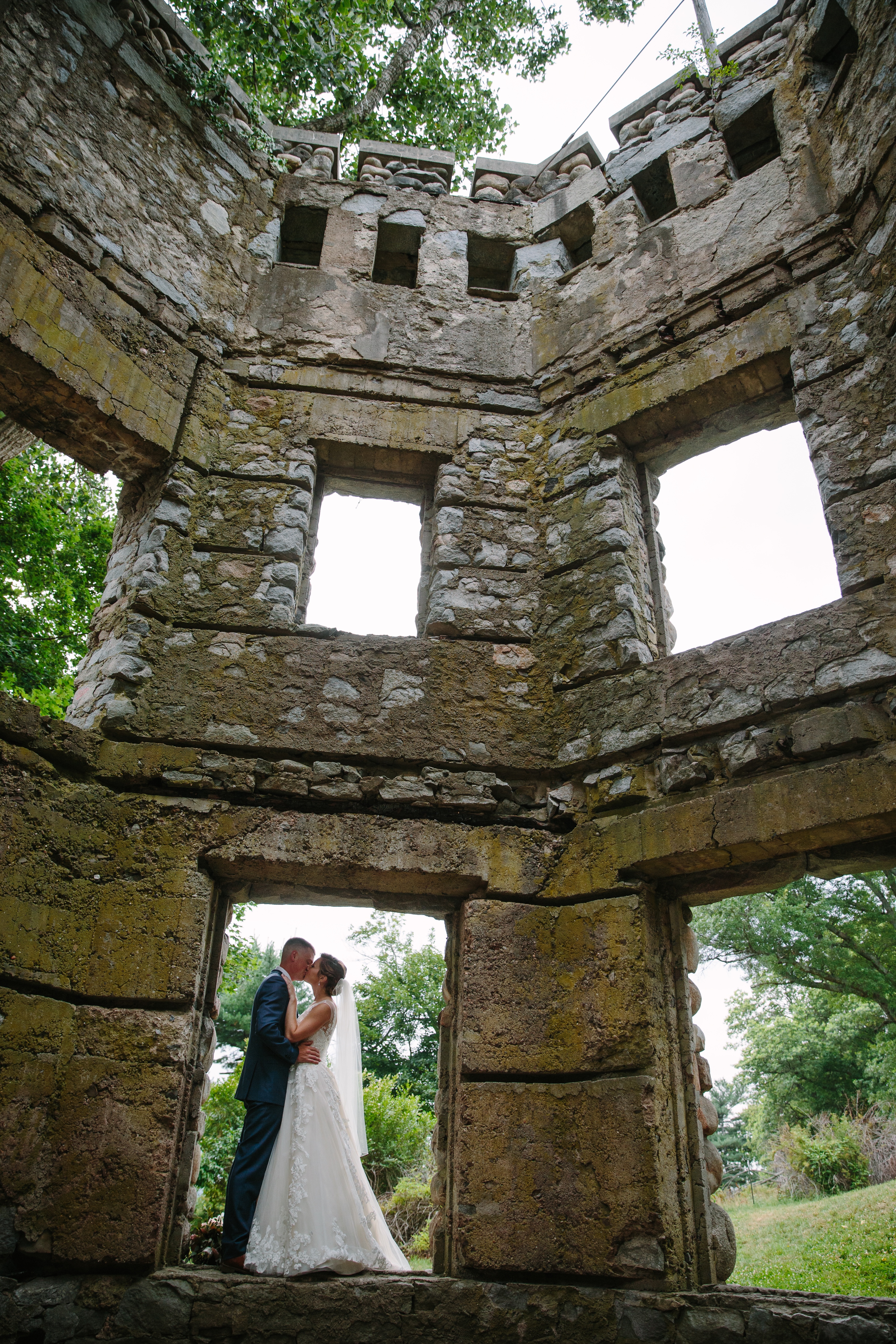 The bride and groom had their first look at Bancroft’s Castle, the ruins of a 1906 stone hunting lodge perched on a hill on Gibbet Hill’s grounds. “Being able to go up, just the two of us, and get these amazing photos in this amazing place was a big selling point,” Sarah says. 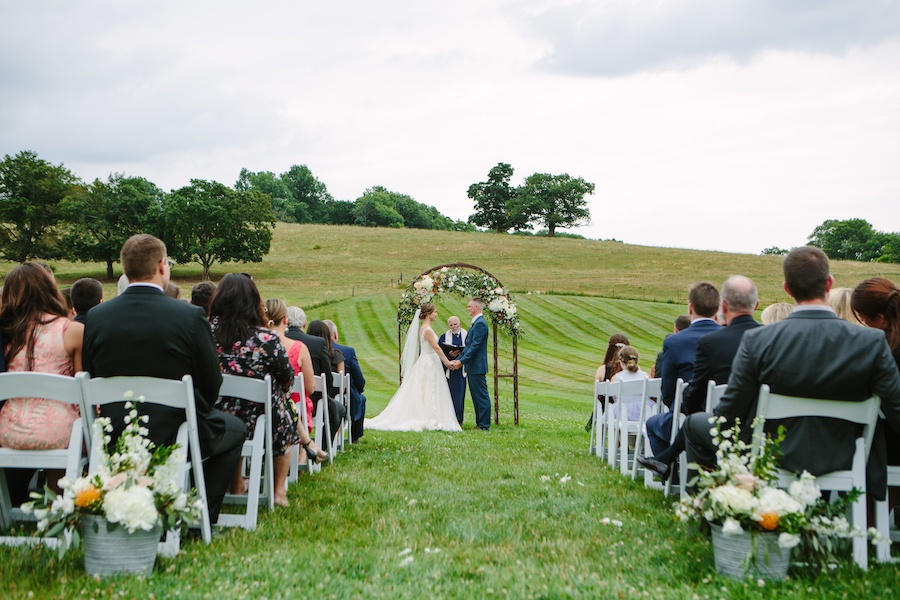 The couple hired Justice of the Peace Stoddard H. Melhado to officiate their outdoor ceremony. “He’s up there on the top of my list for the best decisions I made for the whole wedding,” the bride says. “He put the most perfect remarks together that totally exemplified our relationship and the people we are.” 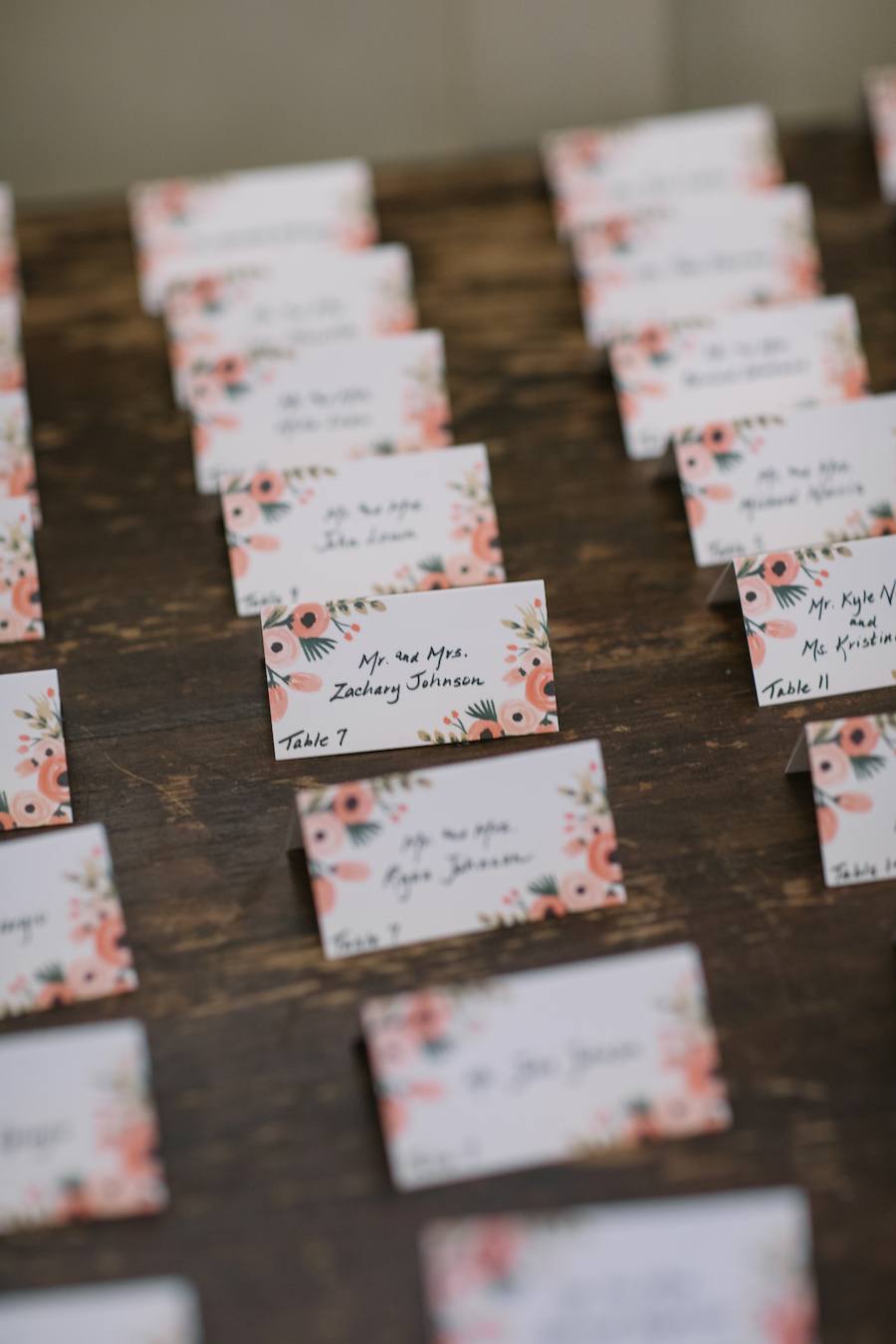 Sarah purchased escort cards by Rifle Paper Co. that played off of the pinks and neutrals throughout the couple’s reception decor, and asked a friend to pen each guest’s name. 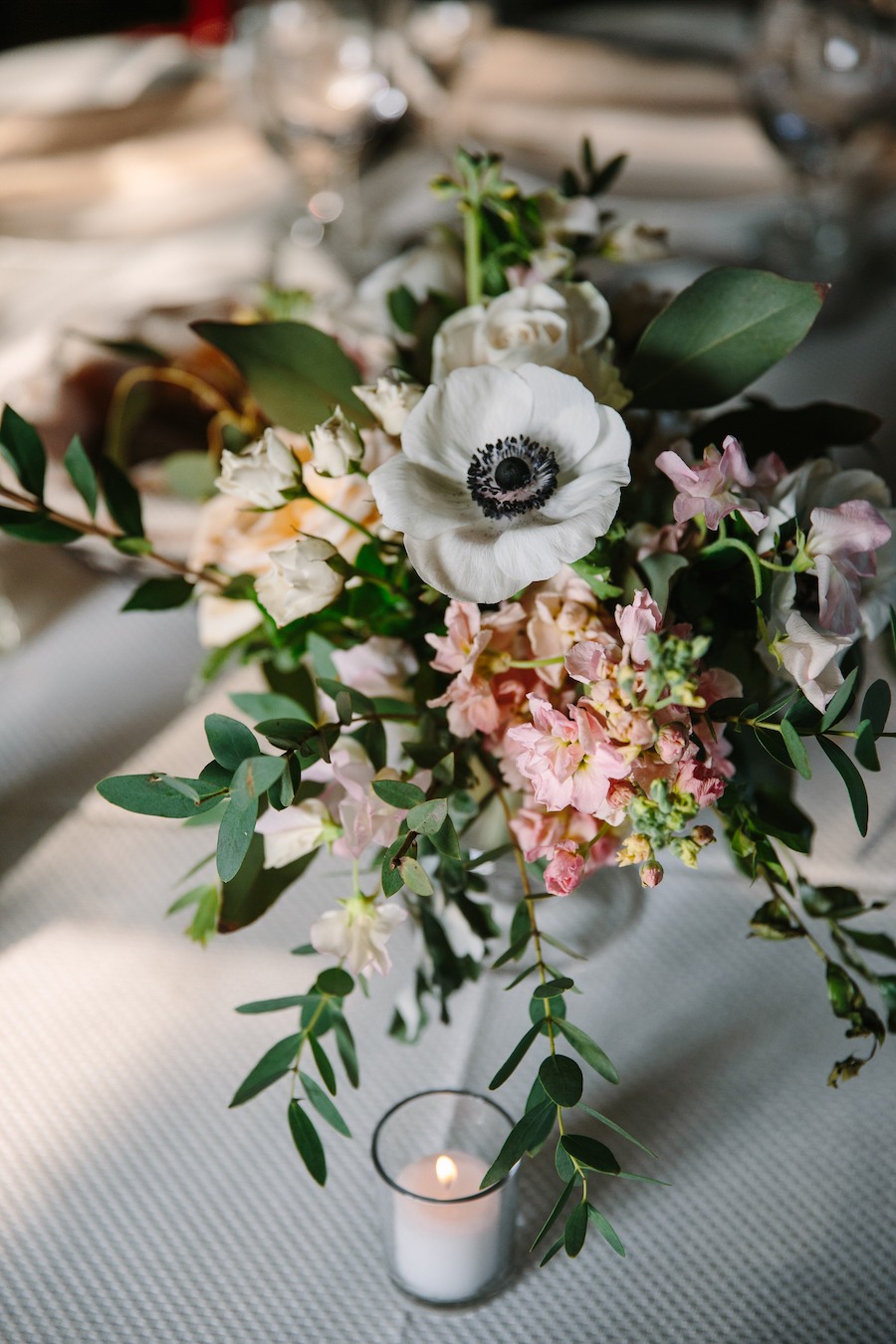 For the centerpieces at the reception, which featured garden roses and eucalyptus, Sarah requested white and creamy hues, as well as touches of soft pink. 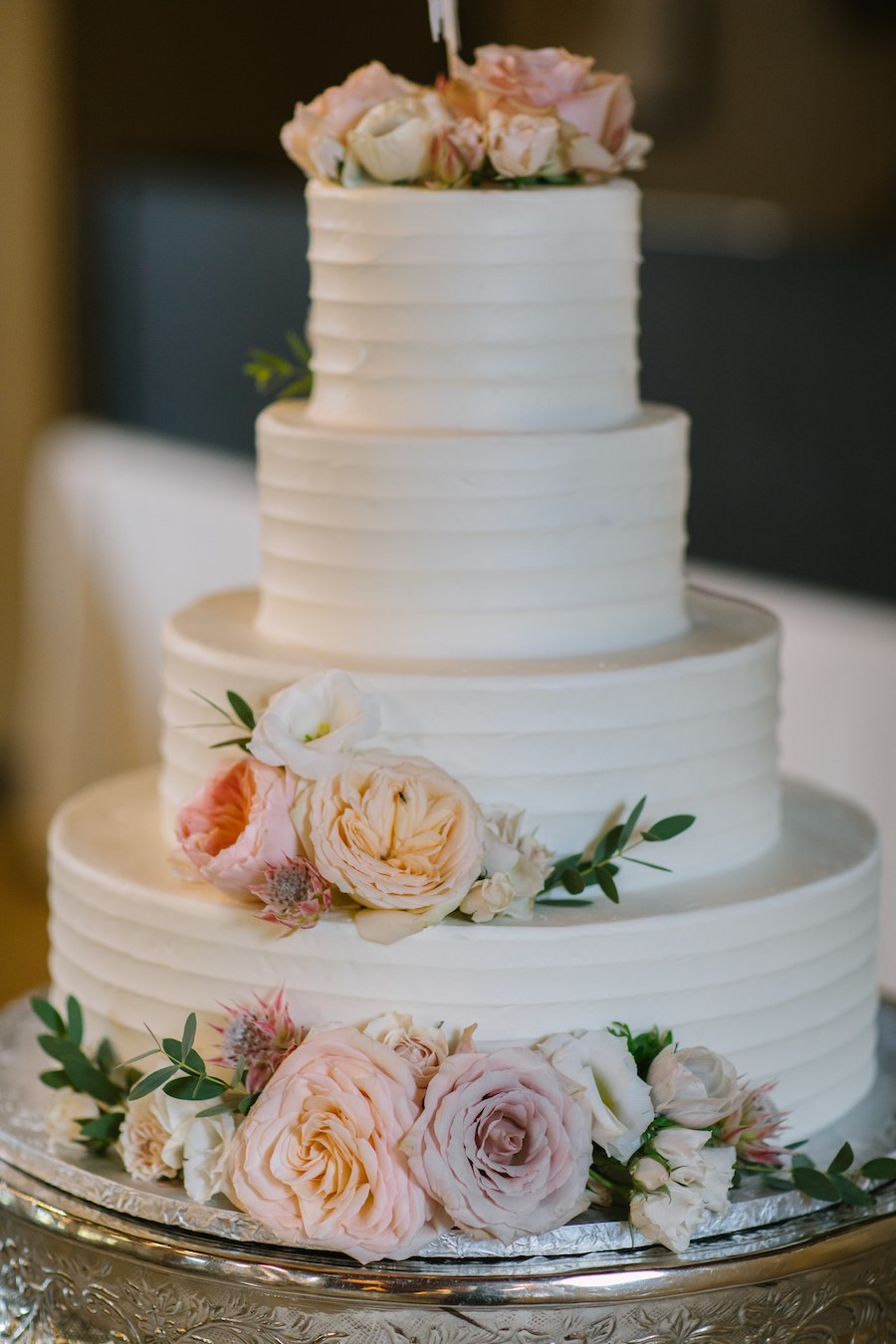 Each tier of the couple’s wedding cake boasted a different flavor, from chocolate with mocha mouse and a fudge-truffle filling to a white cake with raspberry buttercream and preserves. 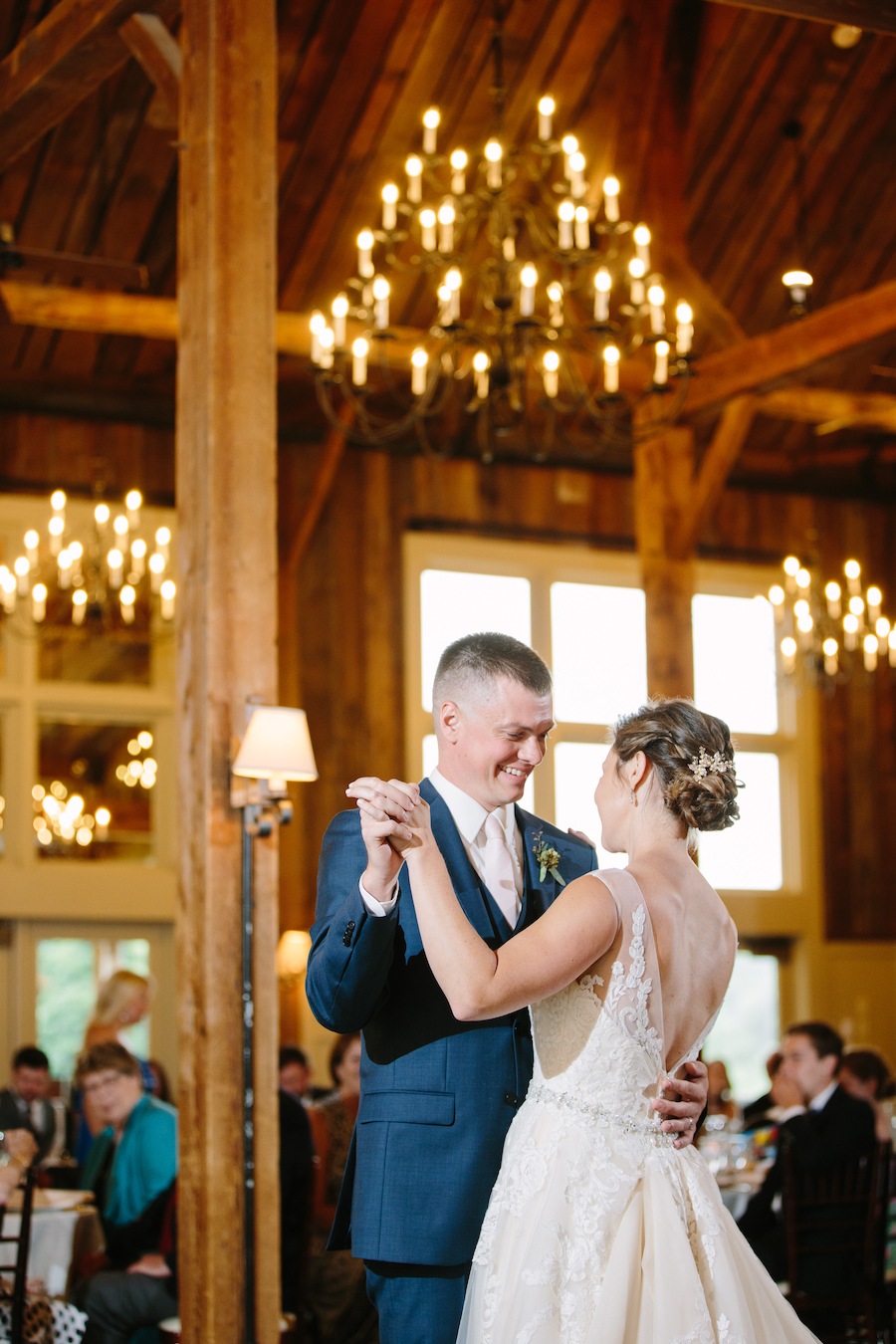 Sarah and Nick had their first dance to “Walk With You,” by Dispatch. “It’s a band we both love and grew up listening to, since it was popular when we were in high school, and we’ve seen them all across the country. We were probably the only ones at the wedding who had ever heard that song, but I think that was something that we liked about it.”