May 20, 2018
The Popponesset Inn
Mashpee, Massachusetts 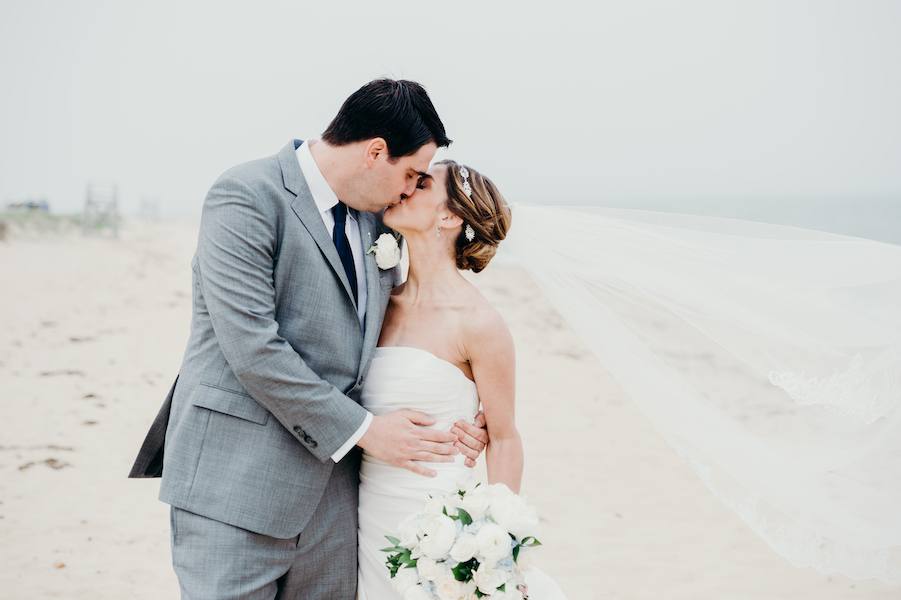 Kim Roberts and Ed Benes met at Randolph–Macon College in Virginia when they were 18. He played on the school’s football team and she played soccer, so they were quick to become companions. “We had a really good friendship to start off, so I think that made our relationship even more enjoyable,” Kim says. They started dating not long later, and have been together ever since. “I think I knew pretty early on,” she adds.

Years later, Ed secretly invited Kim’s sister, Jessica, down to Virginia, where the couple live. The occasion? He planned to propose with their grandmother’s ring, and he wanted Jessica on hand to film it. On the day of the proposal, they planned to go hiking in Shenandoah National Park, and even though Kim was “super sick that day,” Ed recalls, they hit the trails. When they reached a waterfall, Ed got down on one knee while Kim was peering up at the view. She turned around, and he asked her to marry him. “I definitely dropped a lot of curse words,” Kim says, with a laugh. “I was very shocked, but it was very exciting and I was so happy.” Afterward, Jessica, who had recorded the entire moment, “proceeded to send it to everyone we know,” Ed says.

Since Kim grew up in the Boston area and Ed’s grandmother lived on the Cape for many years, the Richmond-based couple decided to head north for their wedding weekend and tie the knot on Cape Cod. “We’re beach people, we love the Cape, and we love seafood,” the bride says. They booked a celebration at the Popponesset Inn—an oceanfront, tented venue in New Seabury—without even seeing the space in person. “When we found the Popponesset online, I called my mom and I was like, ‘I could see us getting married here.’ It just felt like the right place,” Kim says. To harmonize with their coastal setting, the couple filled the venue with blue-and-white décor as well as ocean-inspired details like driftwood, coral, and fishing nets. Their top priority though? Ensuring a fun evening for those closest to them. “We had been together for quite some time, and there were a lot of people in our lives who had been a part of that, so we just wanted it to be a really big celebration,” Kim says. 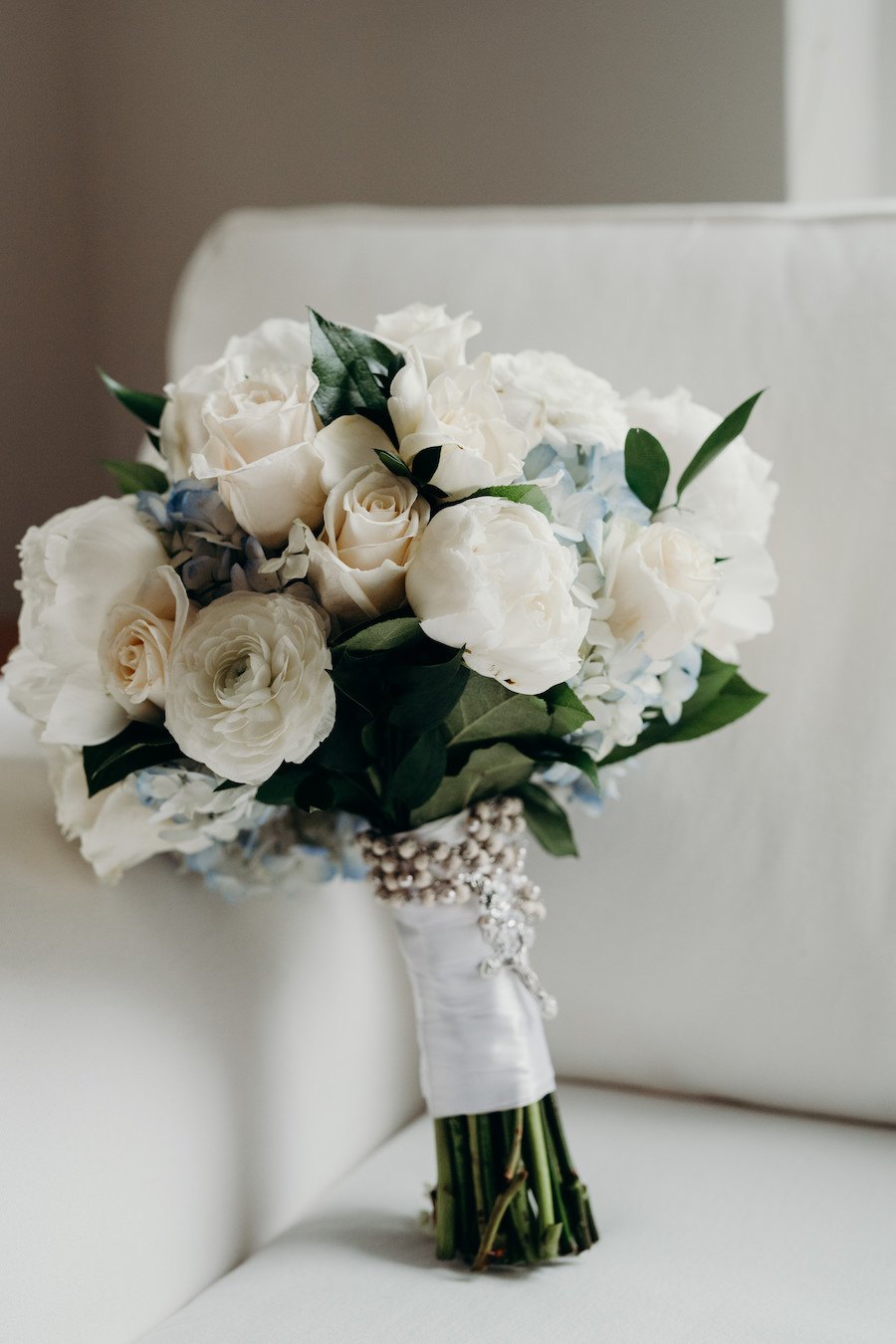 To complement the couple’s color scheme, the bride’s bouquet included blue hydrangeas, white peonies, and ivory roses, as well as a gardenia, which was Kim’s grandmother’s favorite flower. 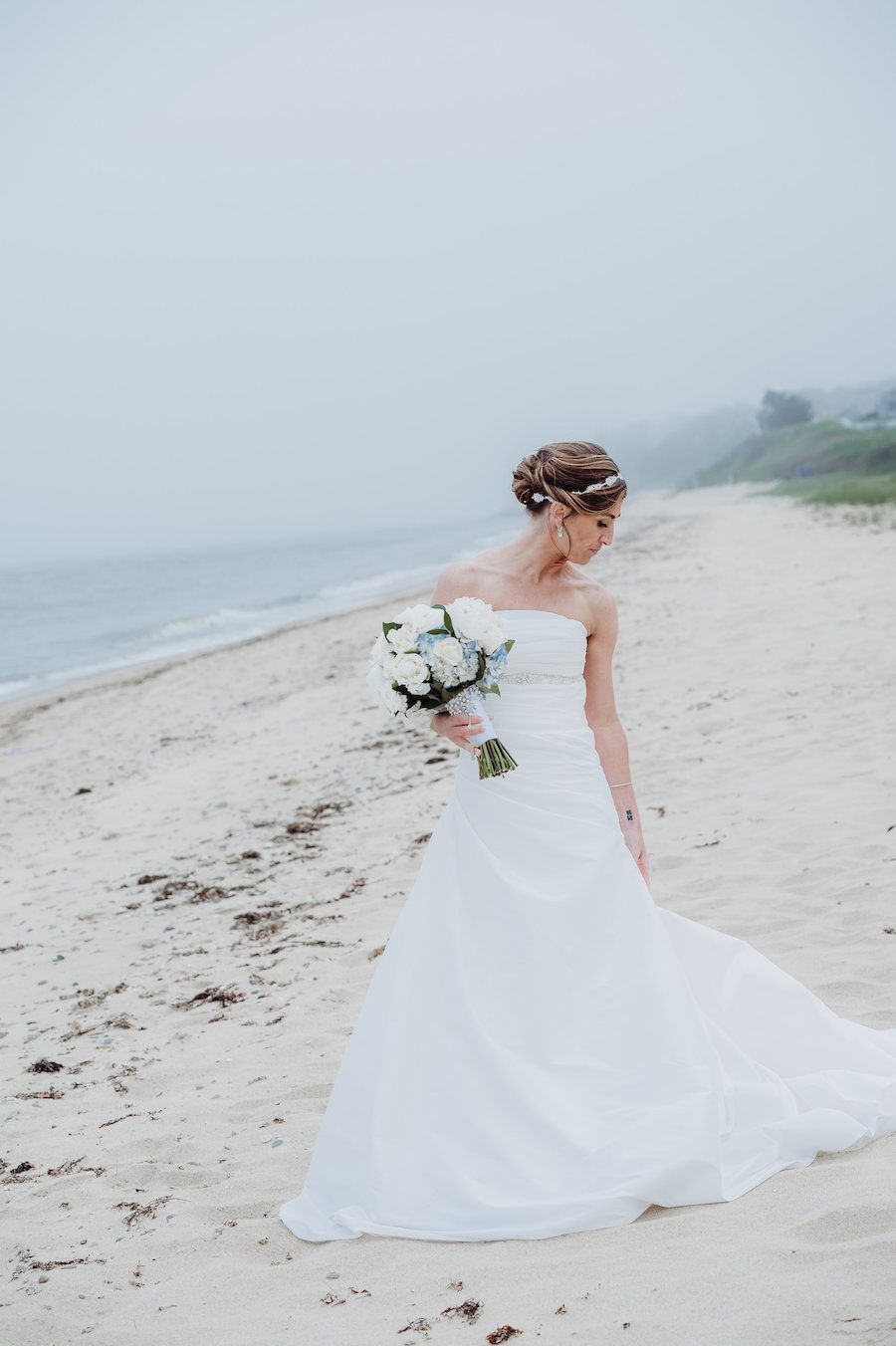 Kim flew up to Boston to hunt for a no-frills frock with her mom and sister. “I’m kind of a tomboy so I wasn’t really into any bows or extensive designs,” she explains. “I wanted something really simple.” The bride found just that at Ve’Lace Bridal, where she purchased her Pronovias gown. 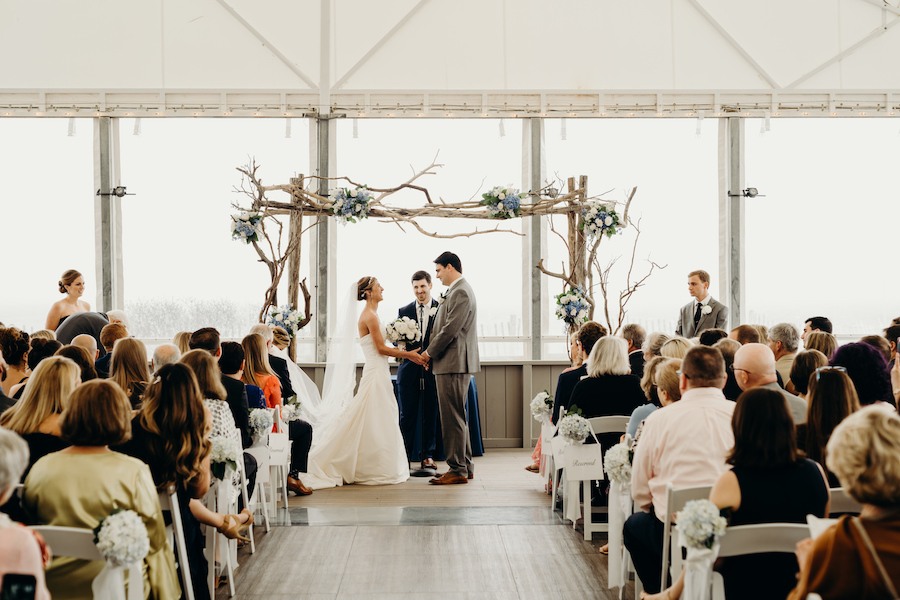 In a ceremony officiated by one of their best friends from college, Robert, Kim and Ed tied the knot under a driftwood arbor adorned with flowers and greenery. 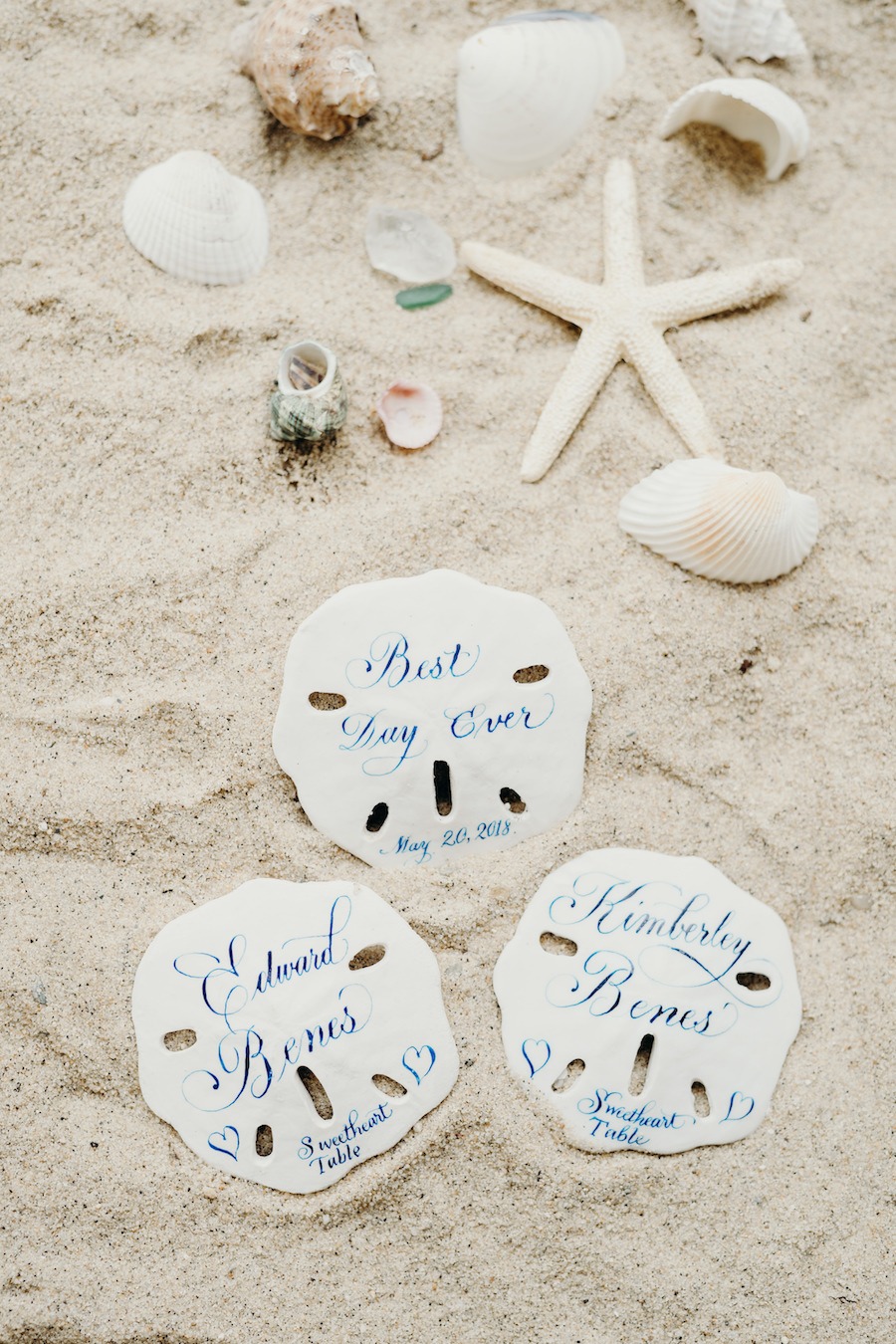 Pinterest inspired the couple’s idea for their sand dollar escort cards. “They ended up being one of the best mementos,” Kim says. “My in-laws still have theirs, a lot of my friends do too, and we have ours on display at home.” 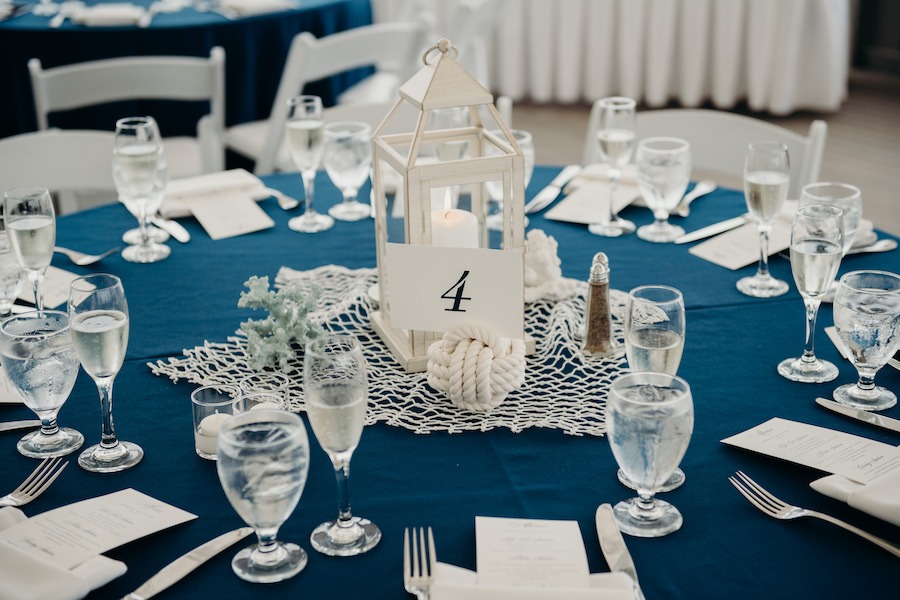 The couple DIY-ed the sea-themed centerpieces for their reception tables. “We even went to several fishing stores to find the perfect fish net,” Kim says. 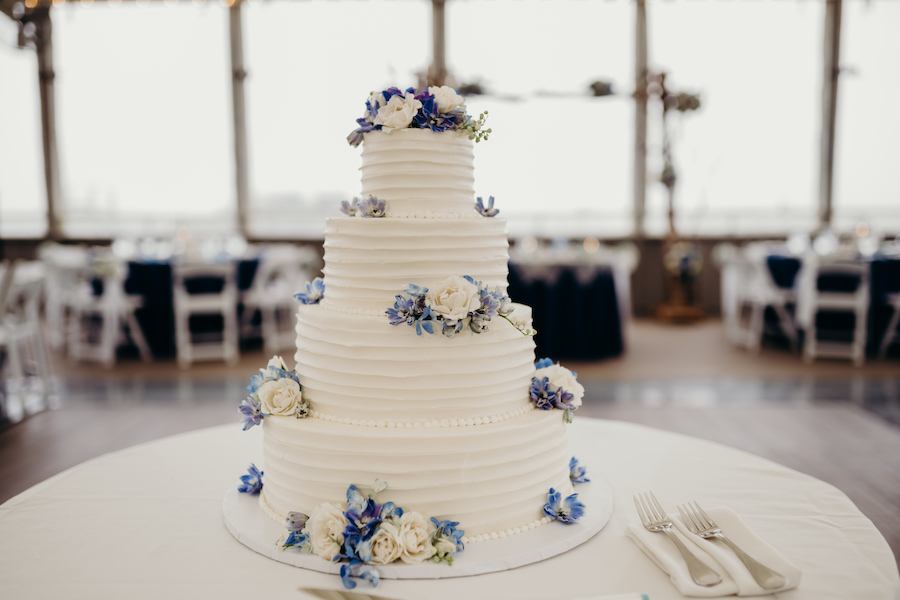 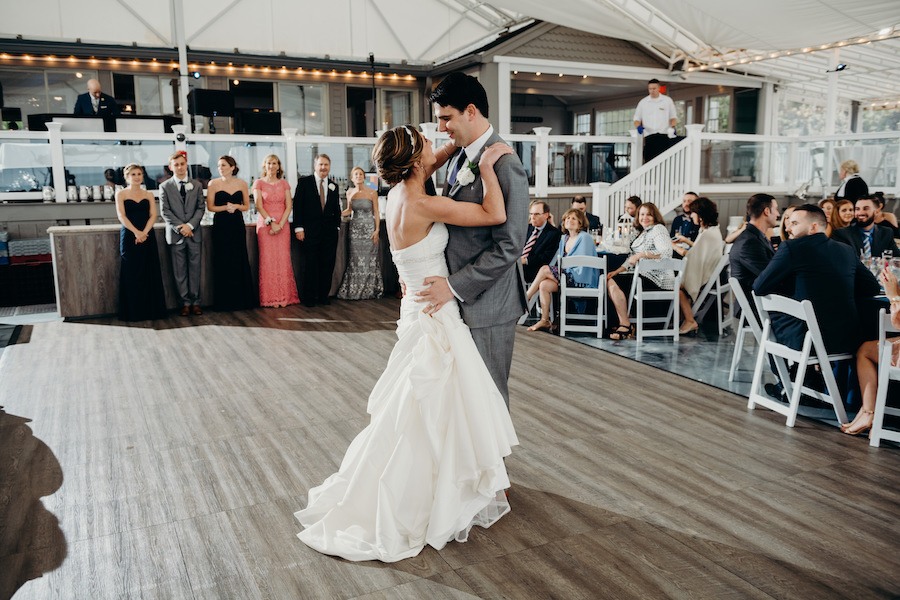 The couple had their first dance to “One and Only” by Adele. “We were in our kitchen going through music and blasting it on the stereo,” the bride recalls.
“We both got super emotional about [the song] and decided it was one we really enjoyed.” 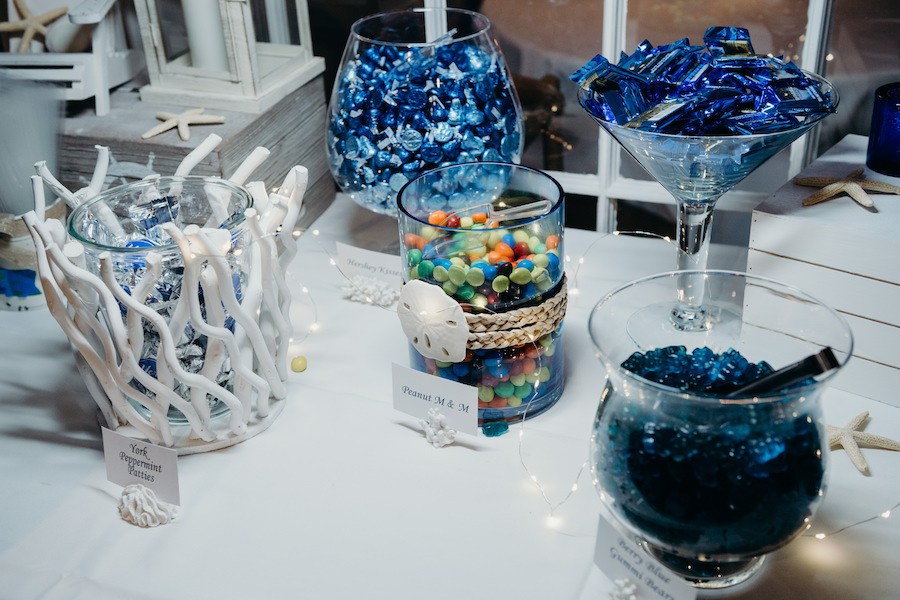 “We wanted to keep it as color-coordinated as we could,” Kim says of the couple’s reception candy table, which featured blue gummy bears, Hershey’s kisses, M&M’s, and other sweets.