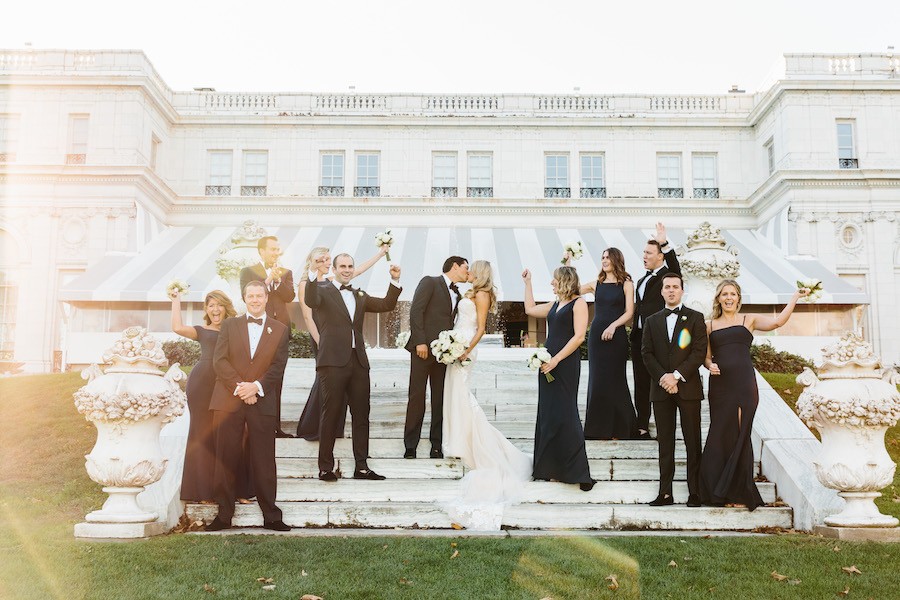 Lauren Raeburn and Devon Manfredonia met when they both began working at the same Boston-area tech company in 2012. “We met probably the first week I started and I didn’t think much of it,” Lauren says. To put it bluntly: She wasn’t interested. “I’d just finished graduate school and I was focused on my career,” she explains. Devon, on the other hand, had noticed Lauren. “He liked that I was super confident and didn’t care what other people thought,” she says. It wasn’t until six months later that Lauren sensed a spark. They’d gone out with mutual friends from work and spent the entire night talking and getting to know each other at the bar. “That’s when I realized, ‘Wow, he’s super intelligent and really well-spoken,'” she recalls. “We had such an interesting conversation and ended up having so much in common. From there, things kind of developed.” The two had their first official date—brunch and a visit to the New England Aquarium—not long after.

In May 2017, Lauren was headed to San Diego for a two-week work trip, and the couple had decided that Devon would fly out for the weekend. “I thought we were just having a nice weekend out in California and honestly thought nothing of it,” Lauren says. However, the Friday that Devon would be in town was Cinco de Mayo, which also happened to be the couple’s five-year dating anniversary. So, in the months before the trip, Devon had asked Lauren’s dad for permission to propose, and also picked out an engagement ring with the help of both of their moms. When the day came, the two took a stroll along one of San Diego’s beaches. “I walked ahead of him a little bit and then he was like, ‘Hey, I don’t think this is our anniversary anymore,'” Lauren recalls. When she turned around, Devon was down on one knee. “I was speechless. I think I blacked out,” Lauren says, with a laugh. “I was shocked to know he’d been planning this for like two months.”

The bride and groom knew right from the beginning that they’d tie the knot in Rhode Island, the bride’s home state. When they saw Rosecliff, in Newport, where Lauren had spent many summers, it “became the obvious choice” for their venue, Lauren says. The aquaphiles, who own a power boat together, were drawn to the mansion for both its history and elegance, as well as its proximity to the sea. On their wedding day, they decorated the venue with abundant florals in white and blush tones. “We wanted ballroom to have an over-the-top, glamorous look,” the bride says.  The other aspect of the evening that they hoped would be larger-than-life? The party itself. “We wanted everyone to let loose and dance,” Lauren explains. “I don’t think anyone left the dance floor. It was so packed that there was barely any room to move around.” After a year-and-a-half of planning, the night was exactly what they’d dreamed it would be. “We were on such an adrenaline high from everything, we couldn’t even sleep that night,” she says. “It was perfect.” 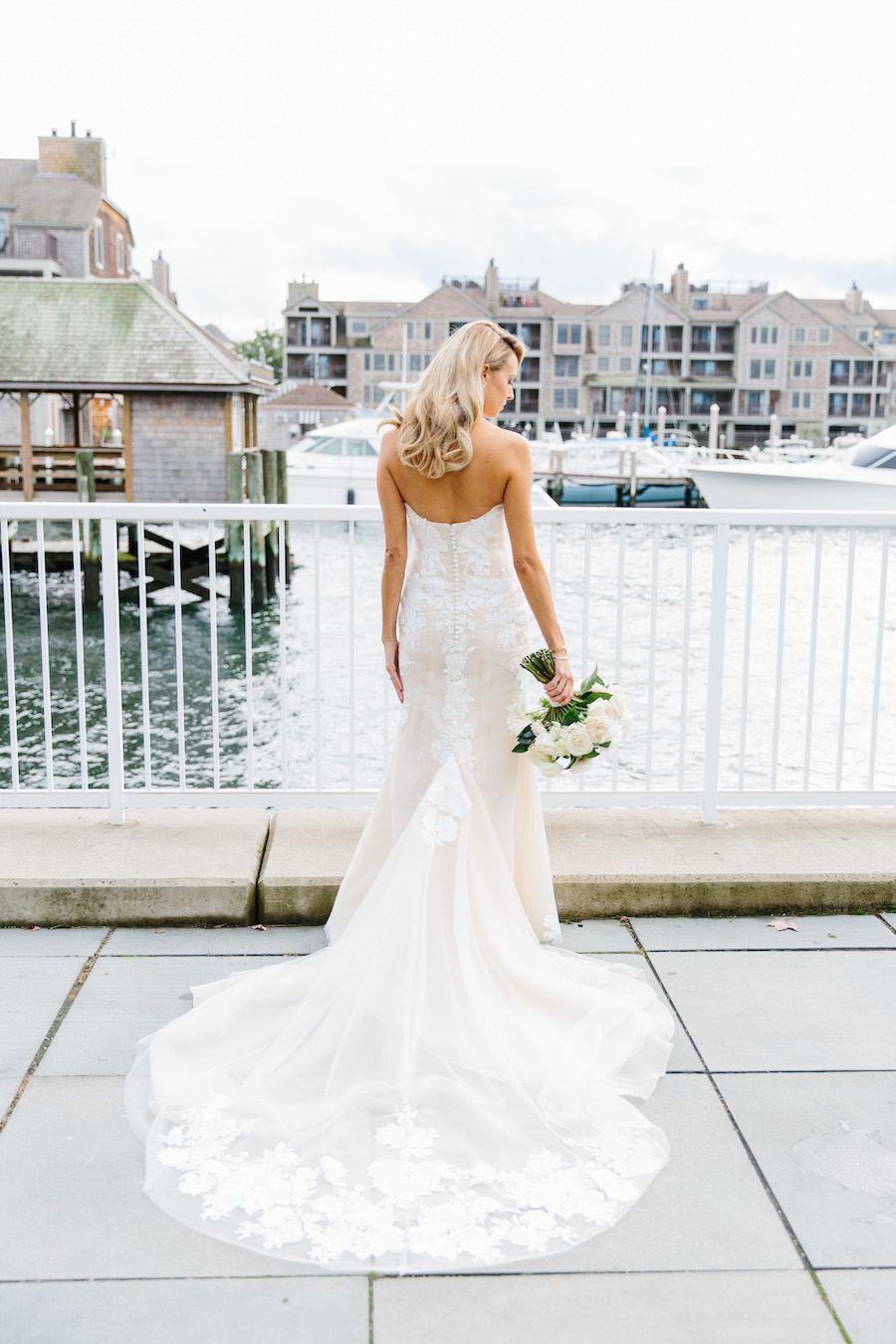 “I think I tried on no [fewer] than 100 dresses,” Lauren says. The bride struggled to find the classic-yet-glam frock she was looking for, but eventually found “the one” at Boston’s Ľélite Bridal Boutique—despite the fact that it wasn’t exactly what she’d originally had in mind. “It was a bit different because it wasn’t a white, white dress and it was strapless, which I didn’t think I was going to wear,” she adds. 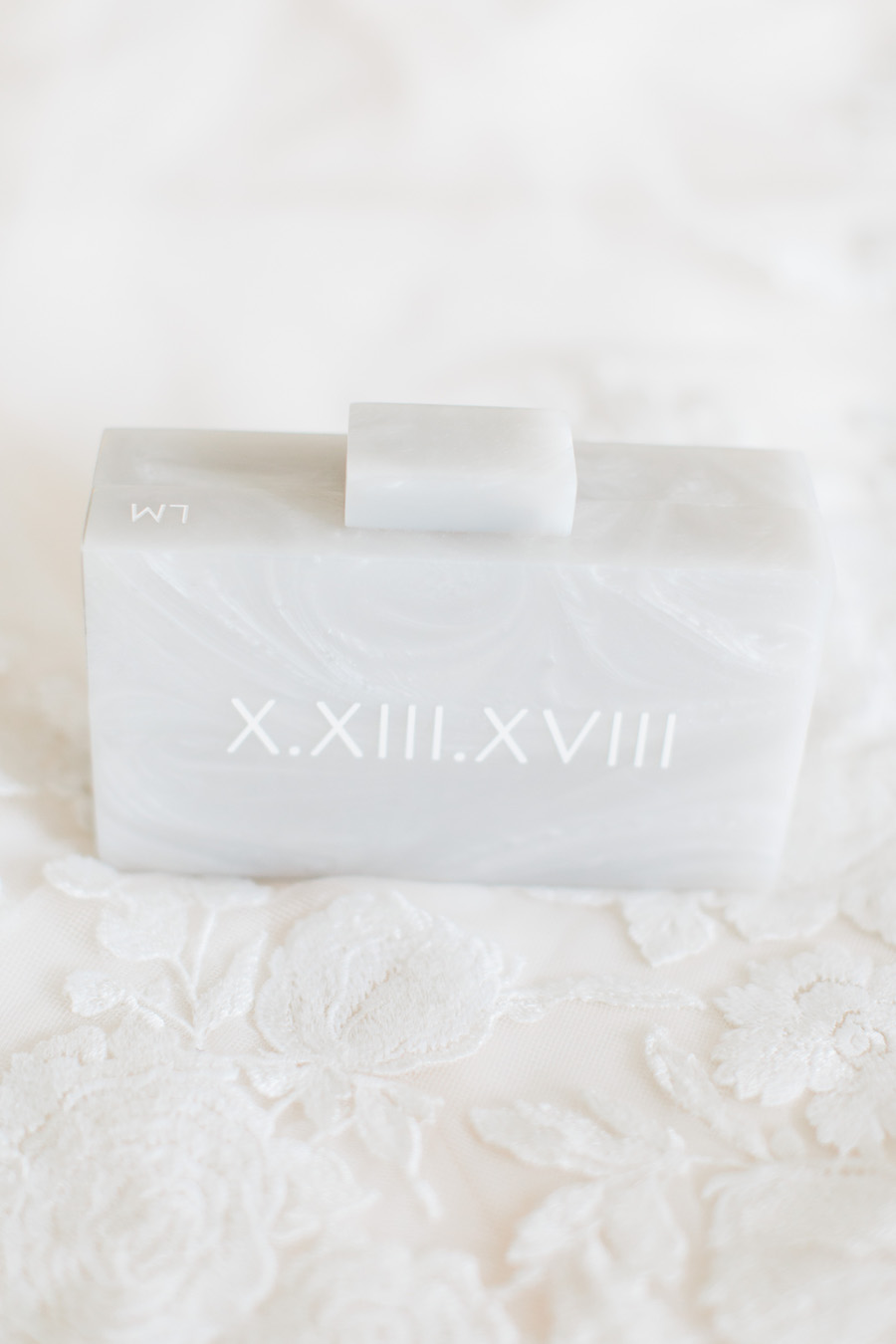 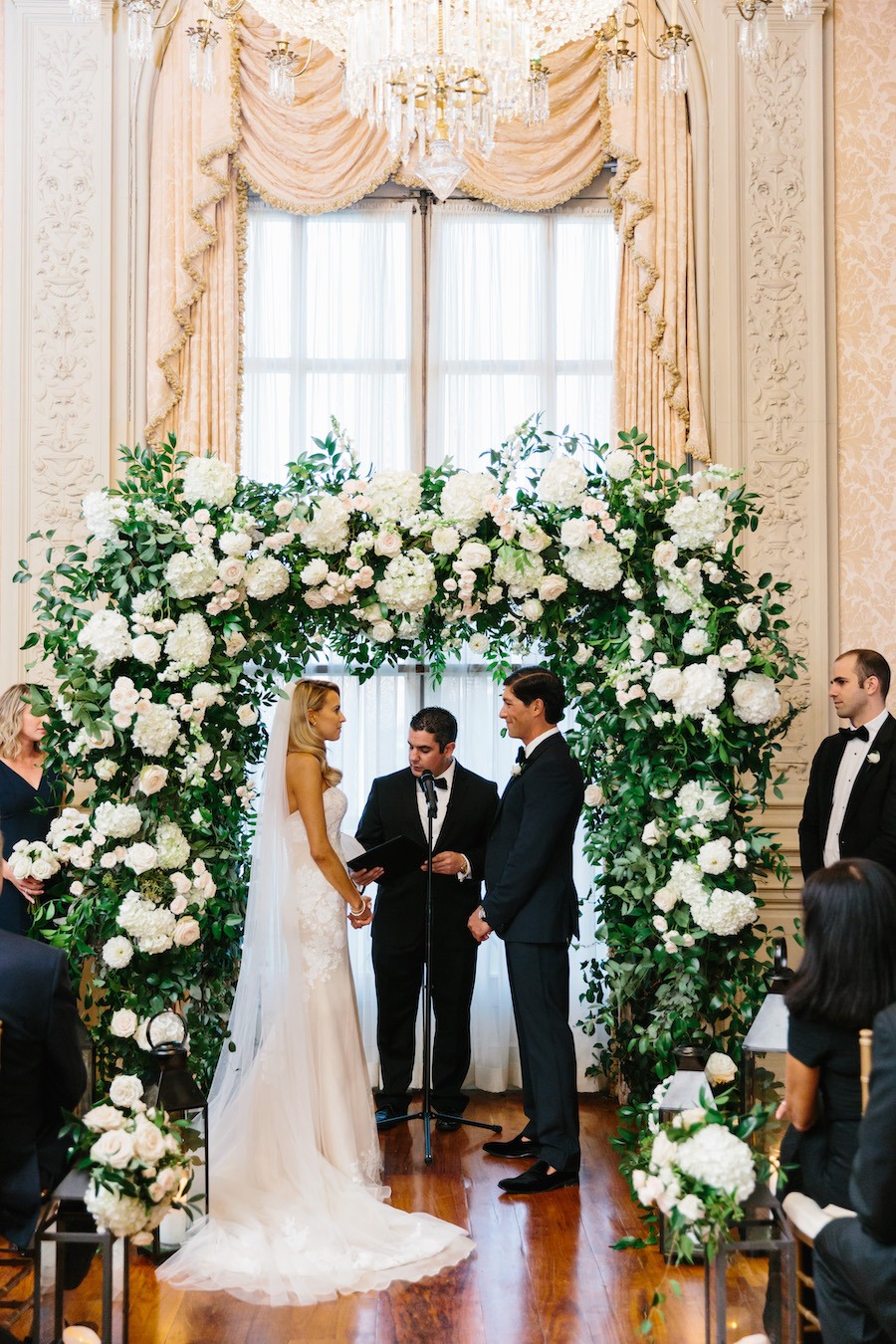 The couple’s wedding ceremony was officiated by their close friend Alex, who the bride has known for “years and years,” she says. “We knew we wanted him to do it from the second we got engaged.” 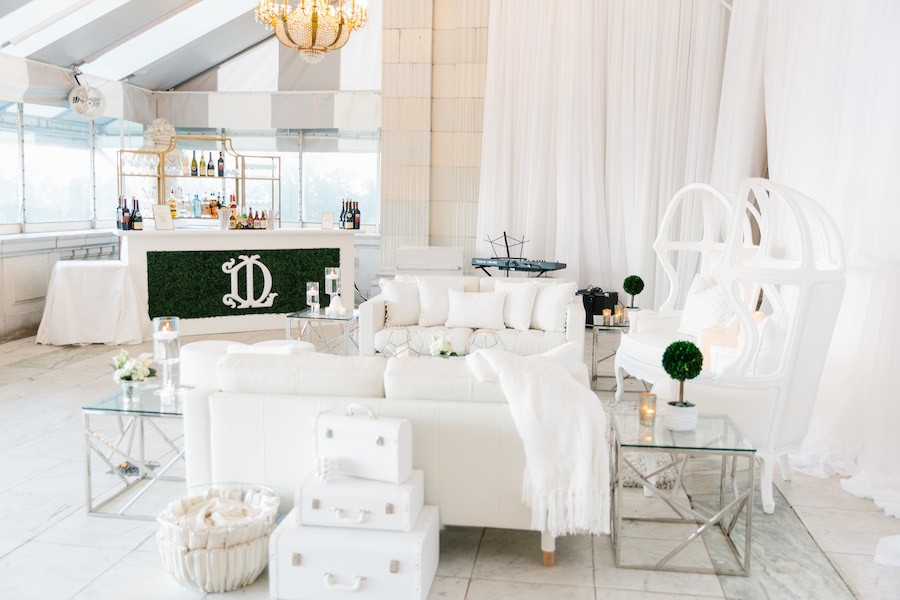 “Because everything in the reception was going to be a bit formal, I wanted a different, more modern vibe for our cocktail hour,” Lauren explains. To achieve that vision, the couple transformed Rosecliff’s terrace into a swanky all-white lounge featuring a bar adorned with greenery and the couple’s custom wedding crest. 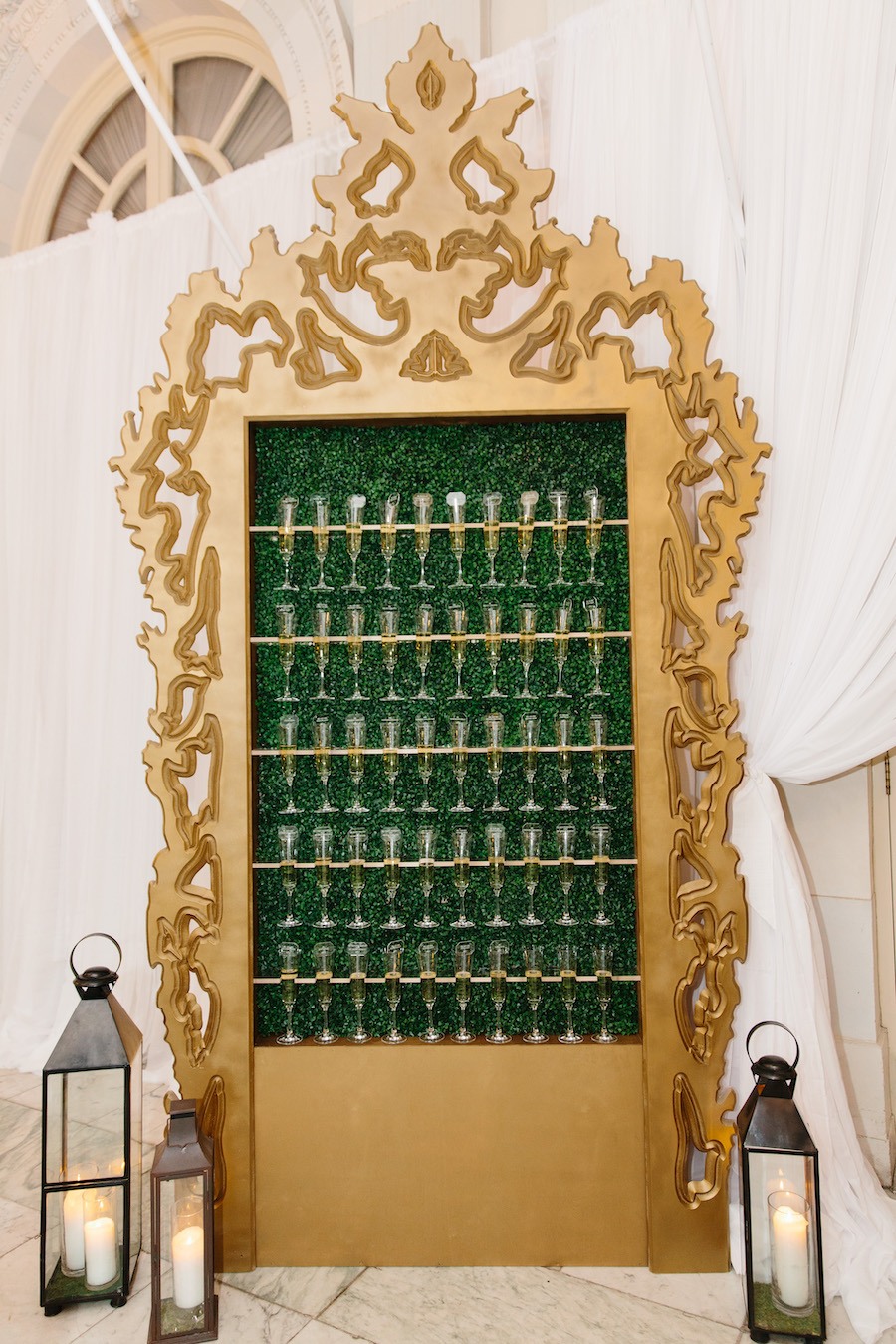 Instead of a traditional seating-card display, Lauren and Devon’s wedding featured a wall of champagne flutes that bore guests’ table assignments. “I was like, ‘This is way more fun and interactive,'” the bride says. “People can get their place-settings and also have a glass of champagne before they sit down.” 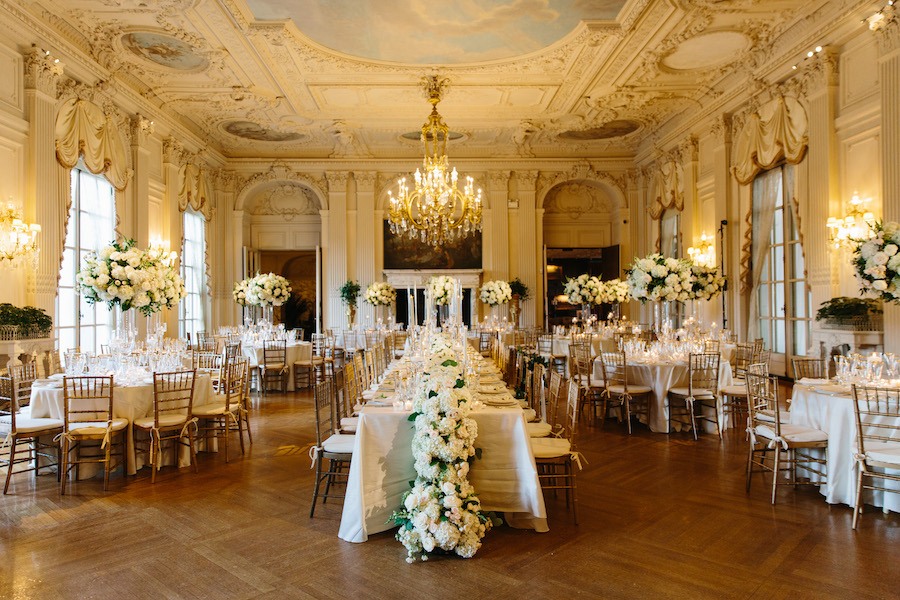 The tablescapes at Lauren and Devon’s celebration featured white and pale-blush garden roses, ranunculus, and hydrangeas. “We didn’t have to do much in terms of the color palette because the ballroom itself is so gorgeous,” Lauren says. “But it’s a big, grand ballroom so we wanted to do these big, grand flowers to match.” 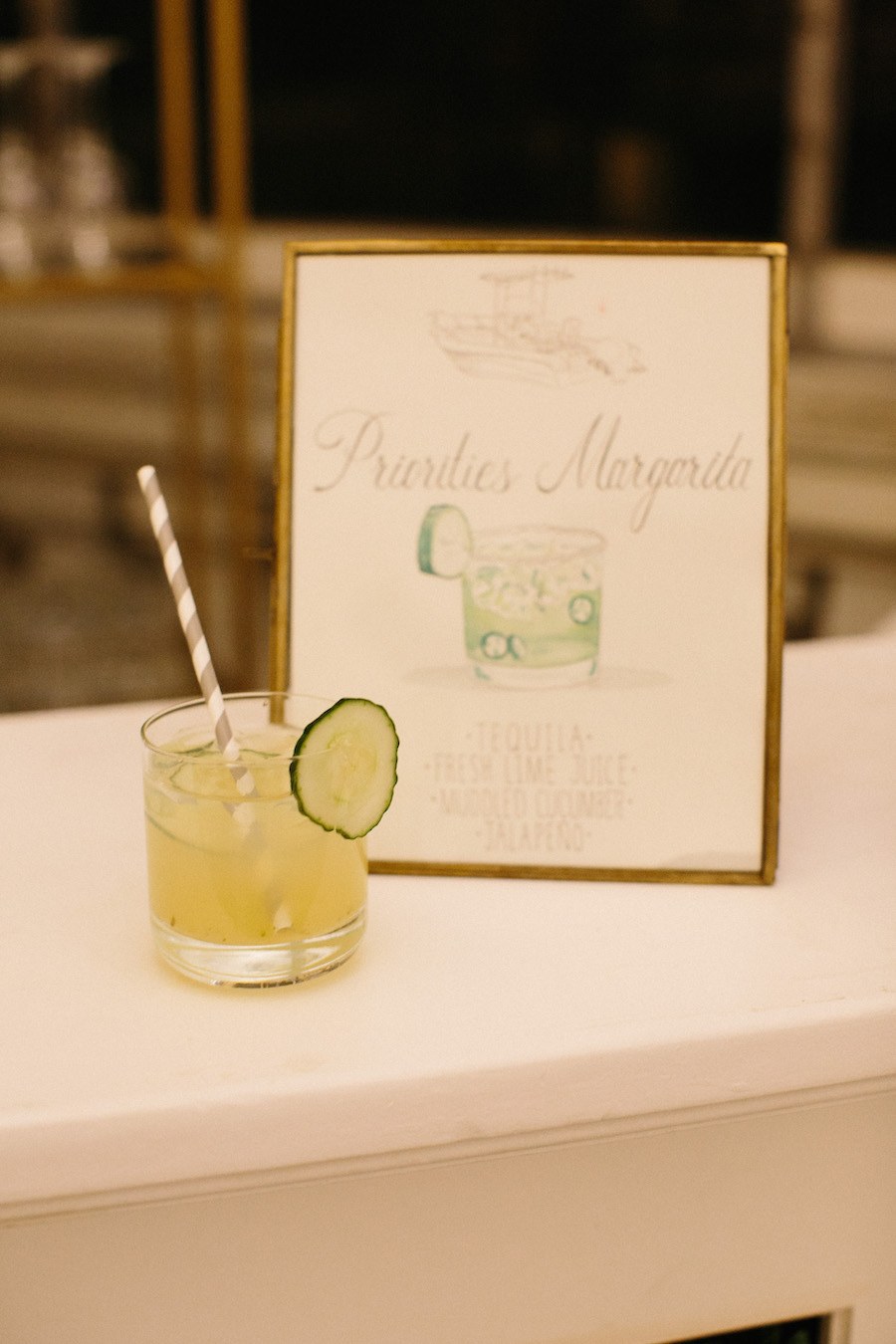 Lauren and Devon’s signature drink was the Priorities Margarita, named after the couple’s boat. “We both love margaritas, and we were engaged on Cinco de Mayo, so it was an obvious [choice],” Lauren says. 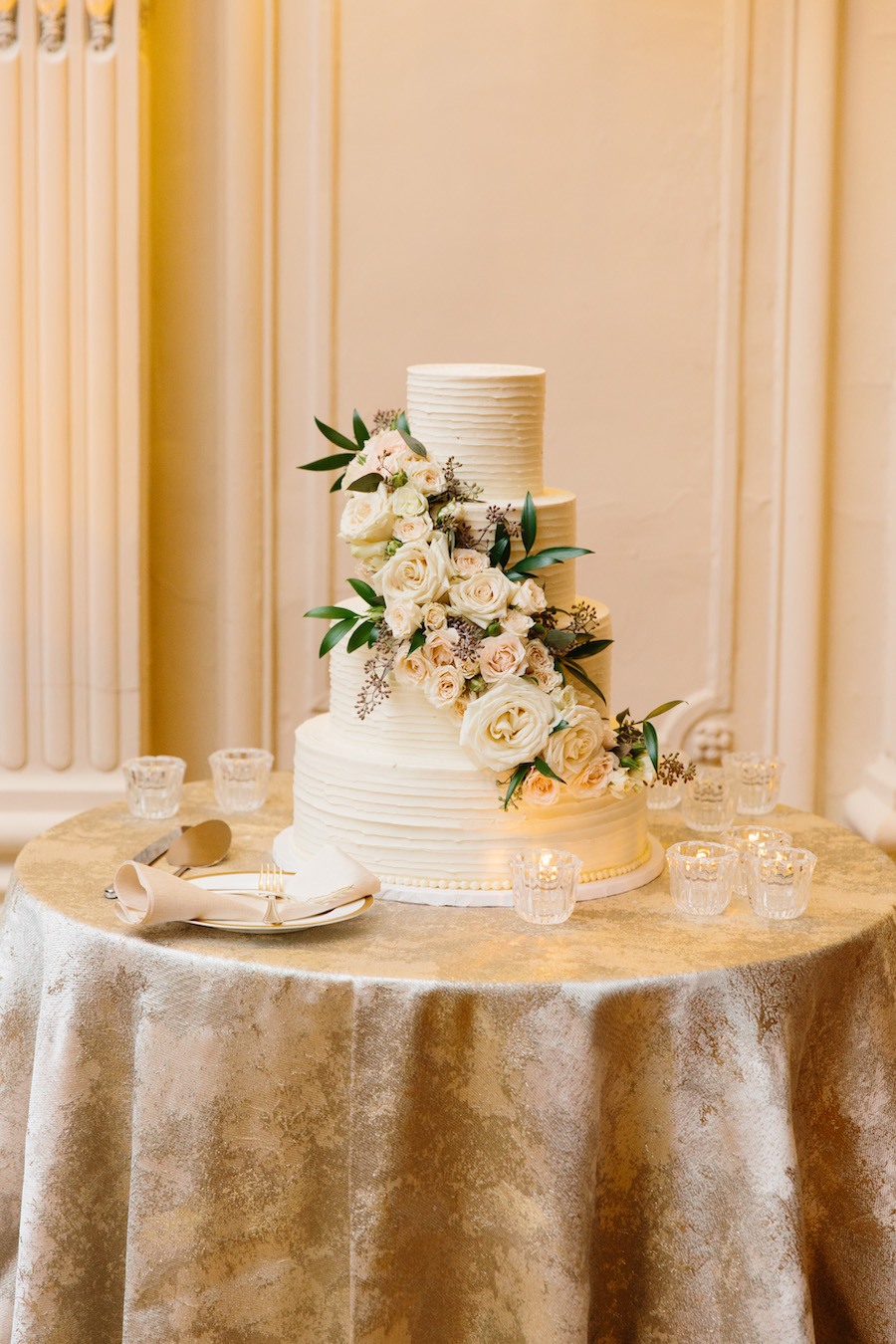 When it came to their wedding cake, the bride and groom wanted the look to be unfussy and the taste to be extra-delicious. They topped their chocolate cake, which featured vanilla buttercream and Oreo and tiramisu fillings, with cascading florals that played off the look of their head-table garland. 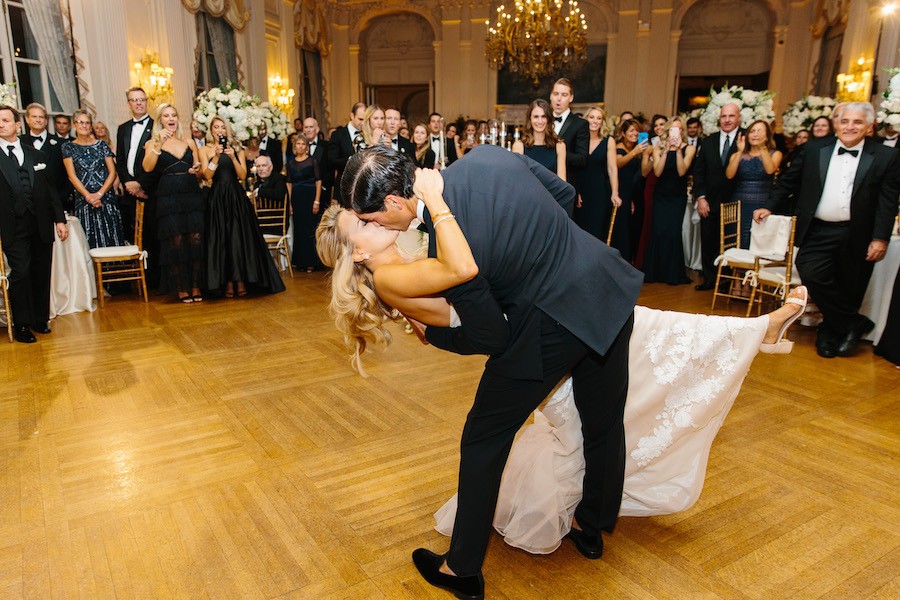 One of the bride’s favorite parts of the night was when the pair had their first dance to Al Green’s “Let’s Stay Together,” which they chose for its sweet message and upbeat tempo. “We both love dancing,”Lauren says. “When we first started dating, I feel like all we used to do was go out dancing in Boston, so we had a ton of fun.”