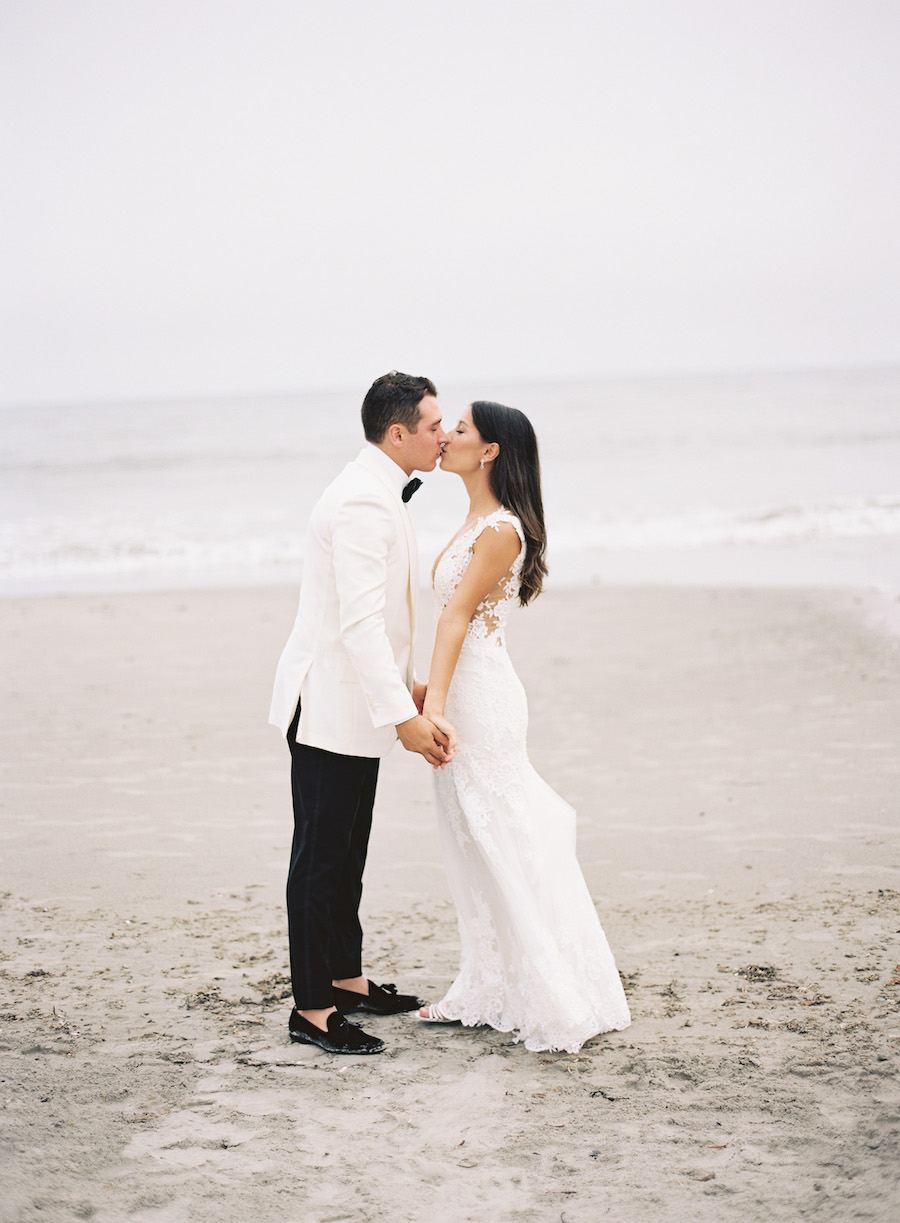 Rita Catapano and Drew Regan started dating their senior year of high school, but met when they were 12 or 13. Though the two started out as friends, their relationship began to blossom into something more as they grew older. “He followed me around to my art classes on his off period and would sit in class even though it wasn’t his class,” Rita says with a laugh. “We kind of became inseparable.” They were 17 when they officially became a couple, and after graduation, they both attended the University of Wisconsin. “When you start dating someone so young, I think nobody really takes young love so seriously,” Rita says. “But I think once we made it out of college, it became pretty clear we were going to be together.”

In June 2017, about 10 years after they first began dating, Drew told Rita that he’d made plans for them to celebrate both of his parents’ birthdays at a vineyard on Long Island, where the couple is from. That day, Rita put on a white dress and they hopped in the car. “I noticed Drew was acting a little nervous, but it was nothing that really caught my attention,” she recalls. When they got to the vineyard, Drew’s family wasn’t there yet, but the staff said that they could walk around while they waited for their table. Drew then led Rita down one of the rows of grape vines, where she again noticed he seemed a bit anxious. “Just as it clicked what was going on, I saw a little setup on the ground with a blanket and champagne,” she says. Drew brought her over to the blanket and got down on one knee. “I was so surprised and taken aback that I broke out in hives,” Rita recalls. About 10 minutes later, both of their families, who had been following their car on the drive, jumped out from behind the vines to celebrate with them. And fortunately, Rita’s hives disappeared within the hour and they spent the rest of the day enjoying wine and cheese.

As the couple turned their attention to wedding planning, there was one thing they knew for sure: The festivities had to take place near water. They grew up in Port Washington, a town on the Long Island Sound, and they wanted a similar seaside backdrop for their celebration. Rita and Drew visited several venues in New York with no luck. Then a friend told them about Newport Beach House, in Rhode Island. They’d each only been to Newport once before, but when they drove up to visit the venue, they fell in love right away. “It was beautiful,” Rita says. “I loved everything about it. It was so bright and airy and right on the beach.” To complement the venue’s clean, modern feel, they planned to keep their reception décor simple with all-white tablescapes, white florals, and abundant greenery. When the big day arrived, it was “nonstop dancing the entire night,” the bride recalls, to everything from old-school hits to belt-worthy Beyoncé tracks with shared friends from both high school and college. “I remember feeling so overwhelmed and exhausted at the same time,” Rita says. “There was so much love in the room, and we just had the best night of our lives.” 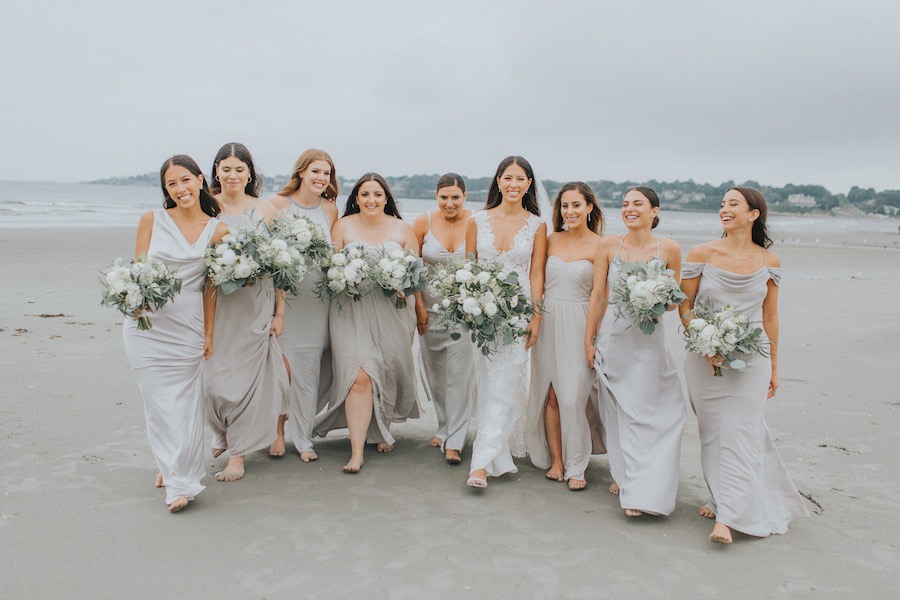 Rita let her bridesmaids choose their own dresses for the wedding day. “I just asked for simple gray dresses with nothing too elaborately beaded, [printed, or textured],” she explains. 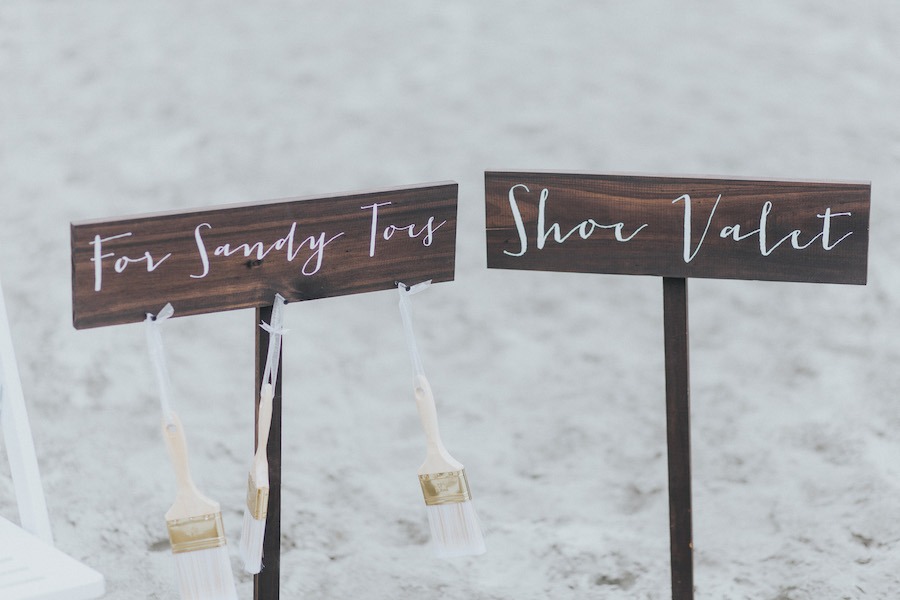 At their beach ceremony, the couple offered their guests a place to take off their shoes and go barefoot. 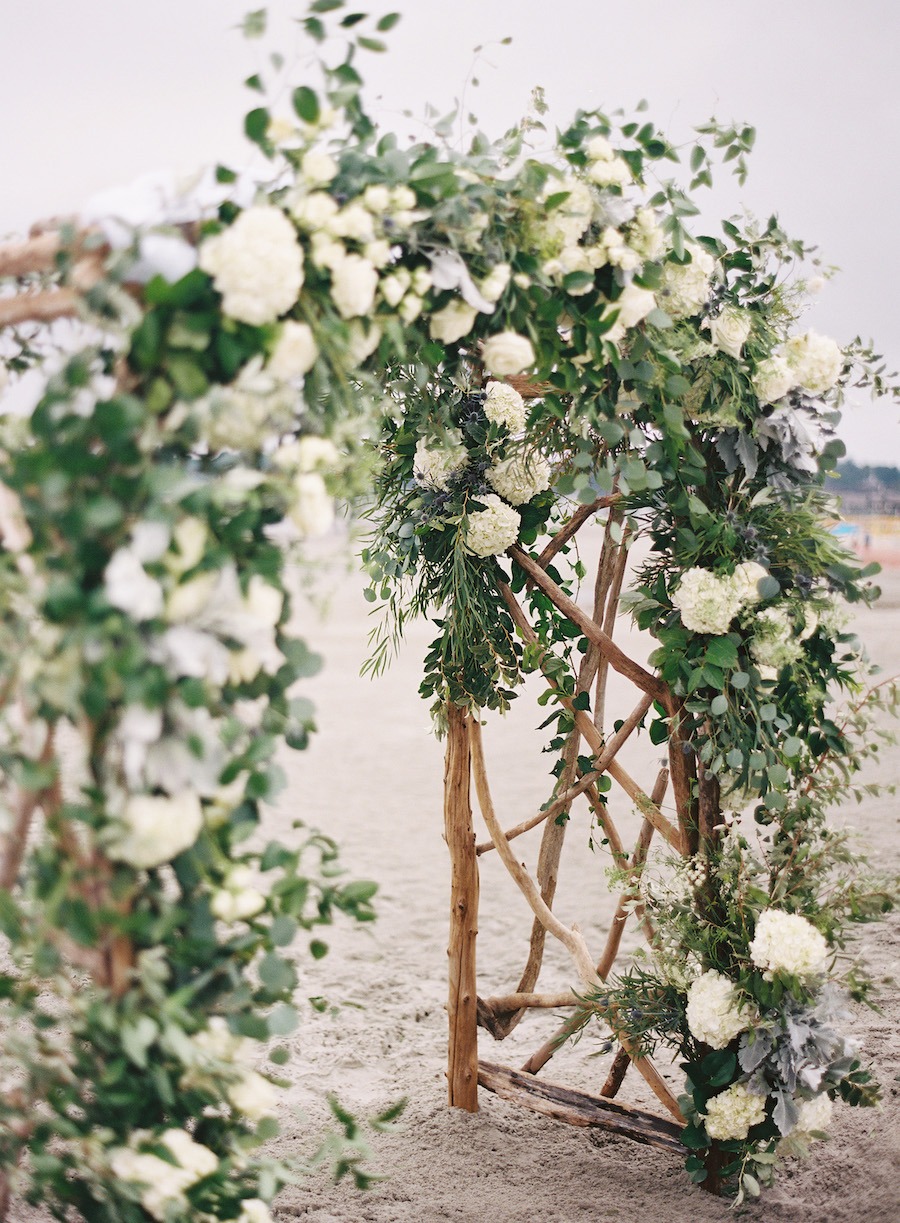 For the bride and groom’s ceremony chuppah, Rita asked floral designer Joyce Holland, of Stoneblossom, to create loose arrangements of green and white blooms that would feel “natural and airy,” she says. 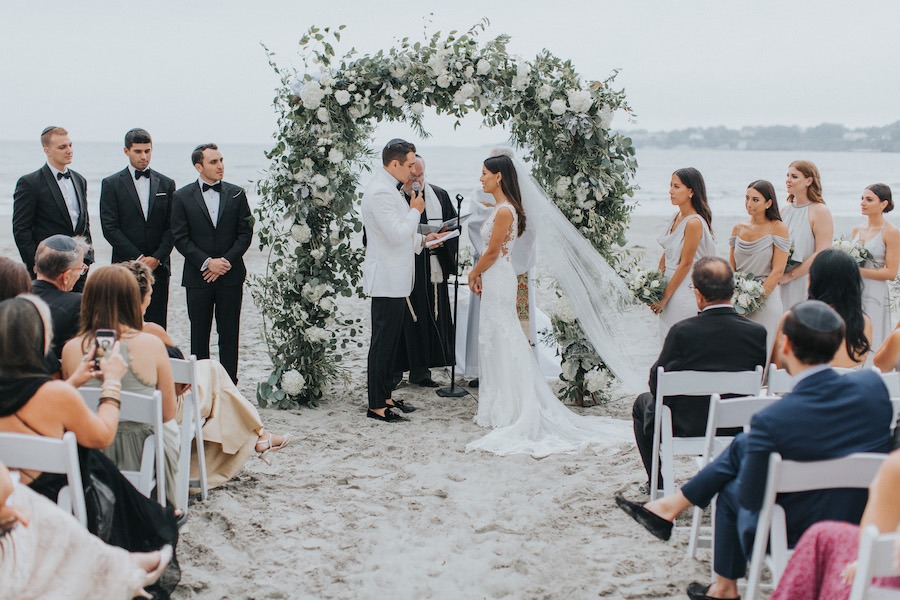 Since Rita’s family is Catholic and Drew’s family is Jewish, the couple’s ceremony was officiated by both a priest and a rabbi, who collaborated ahead of time to combine traditions from both faiths. 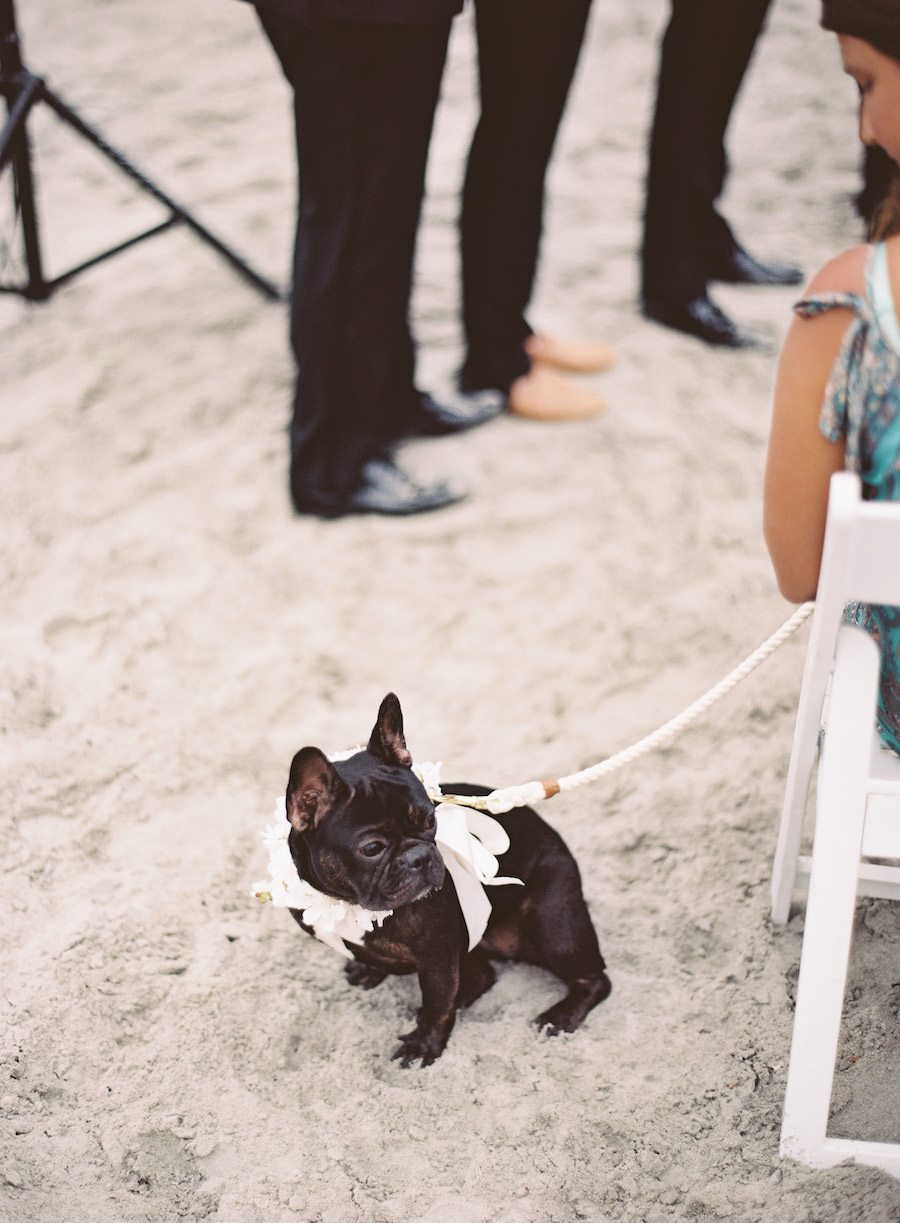 Flaunting a floral collar, the couple’s French bulldog, Luna, walked down the aisle and then sat front row during the ceremony. “We’re just so obsessed with her and in love with her, so we knew
we had to make her part of the wedding,” Rita says. “She had never been on a beach before, but luckily it all worked out.” 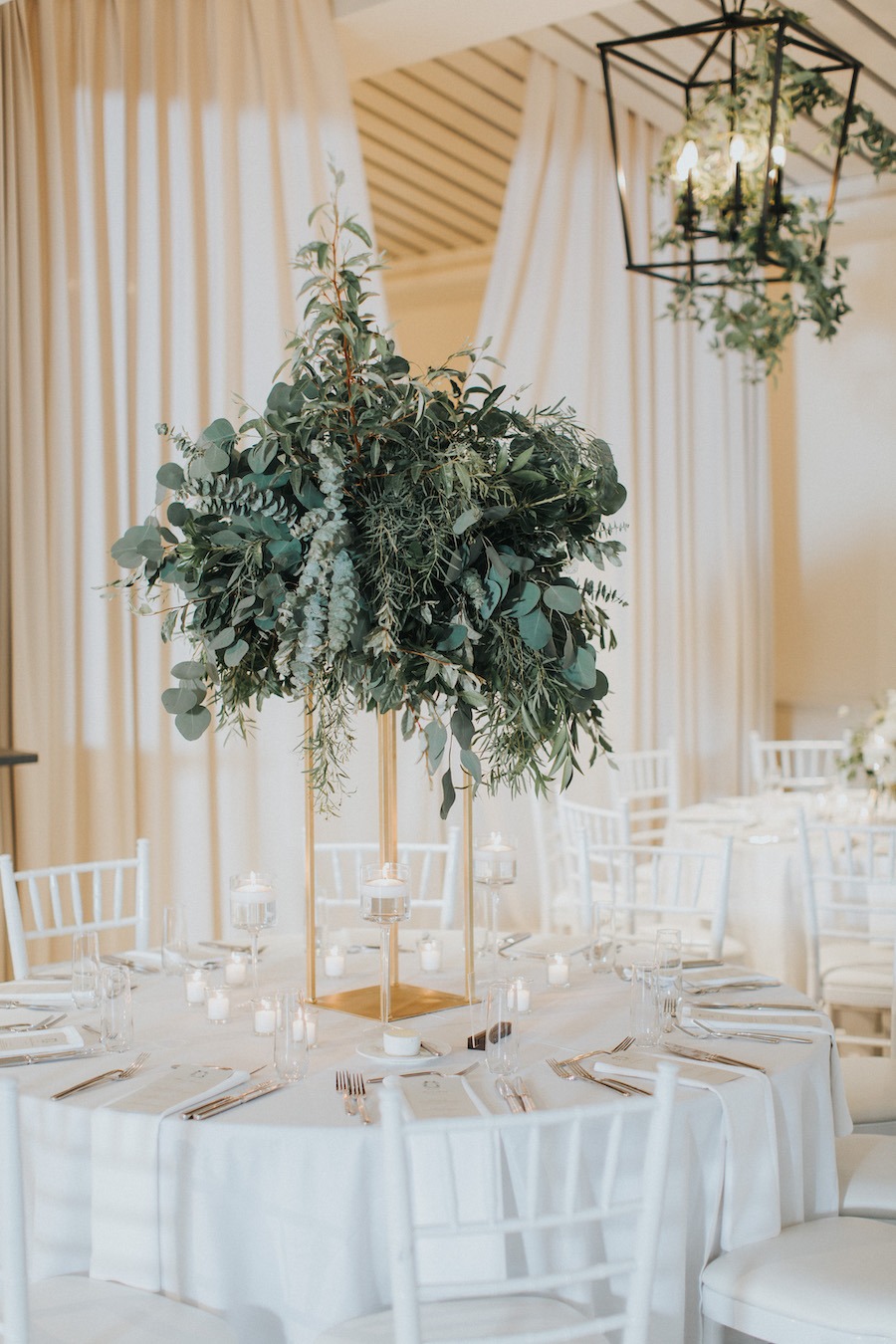 Since Rita wanted the reception décor to have a paired-back, effortless look, Stoneblossom created simple, tree-like centerpieces for some tables and lower floral arrangements that matched the chuppah on others. 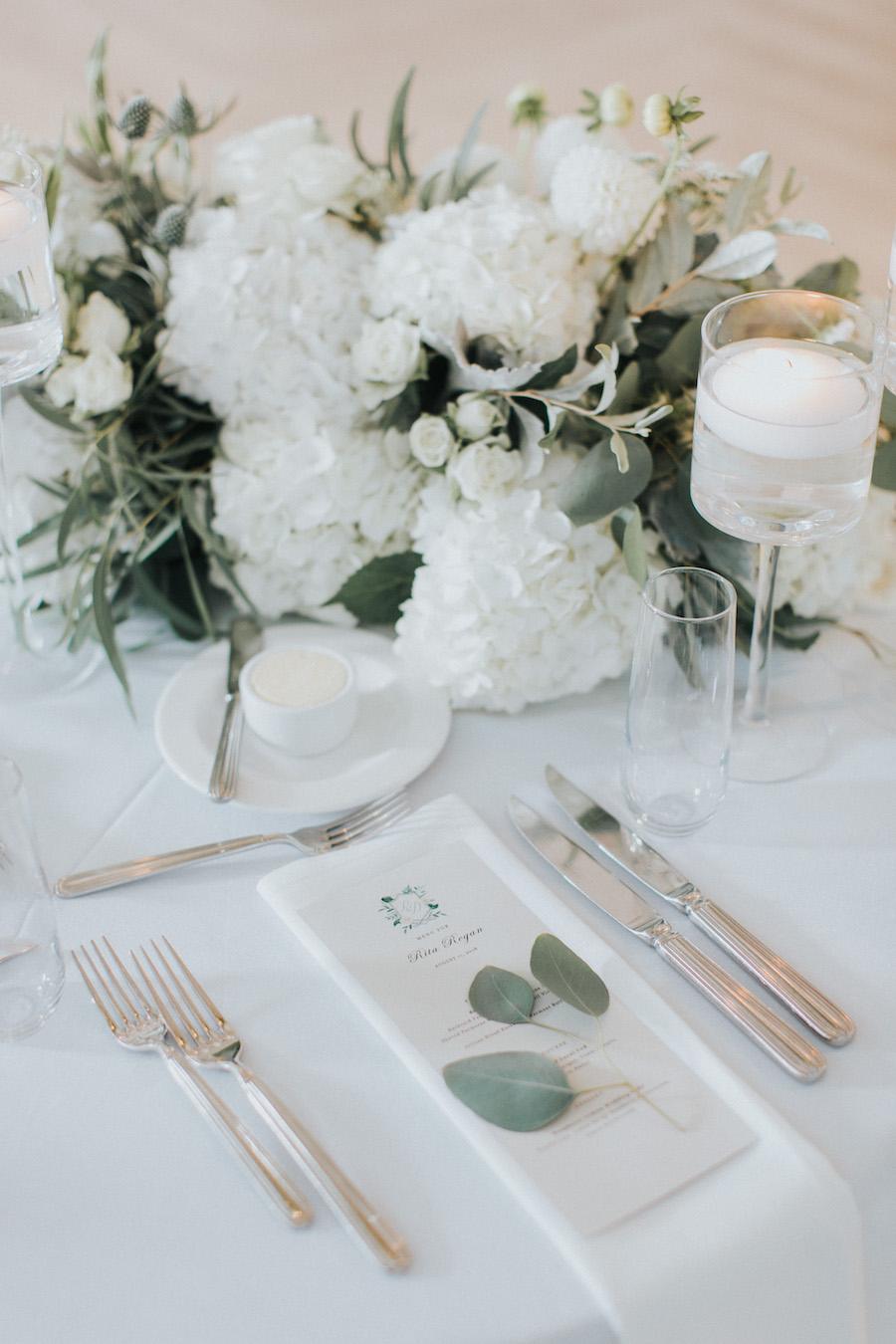 For their reception, the couple customized menus with each guest’s name. “We felt like that was a little touch that would make each guest feel like we paid attention to the fact that they were coming
and we really appreciated it, especially since most guests were coming from out of town,” the bride says. 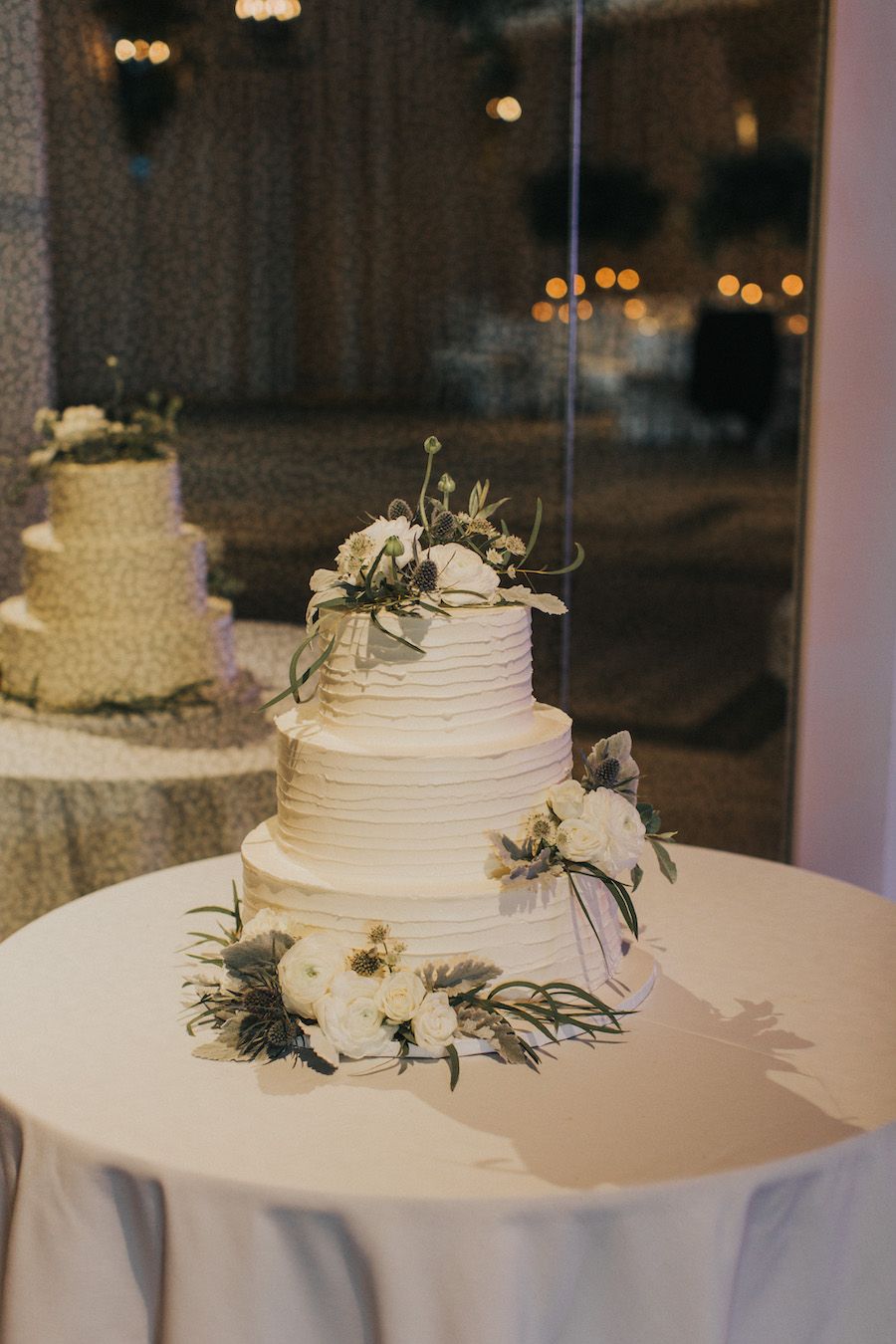 The couple’s all-white wedding cake was strawberry lemonade-flavored. “We wanted to do something fruity instead of chocolate,” the bride explains. 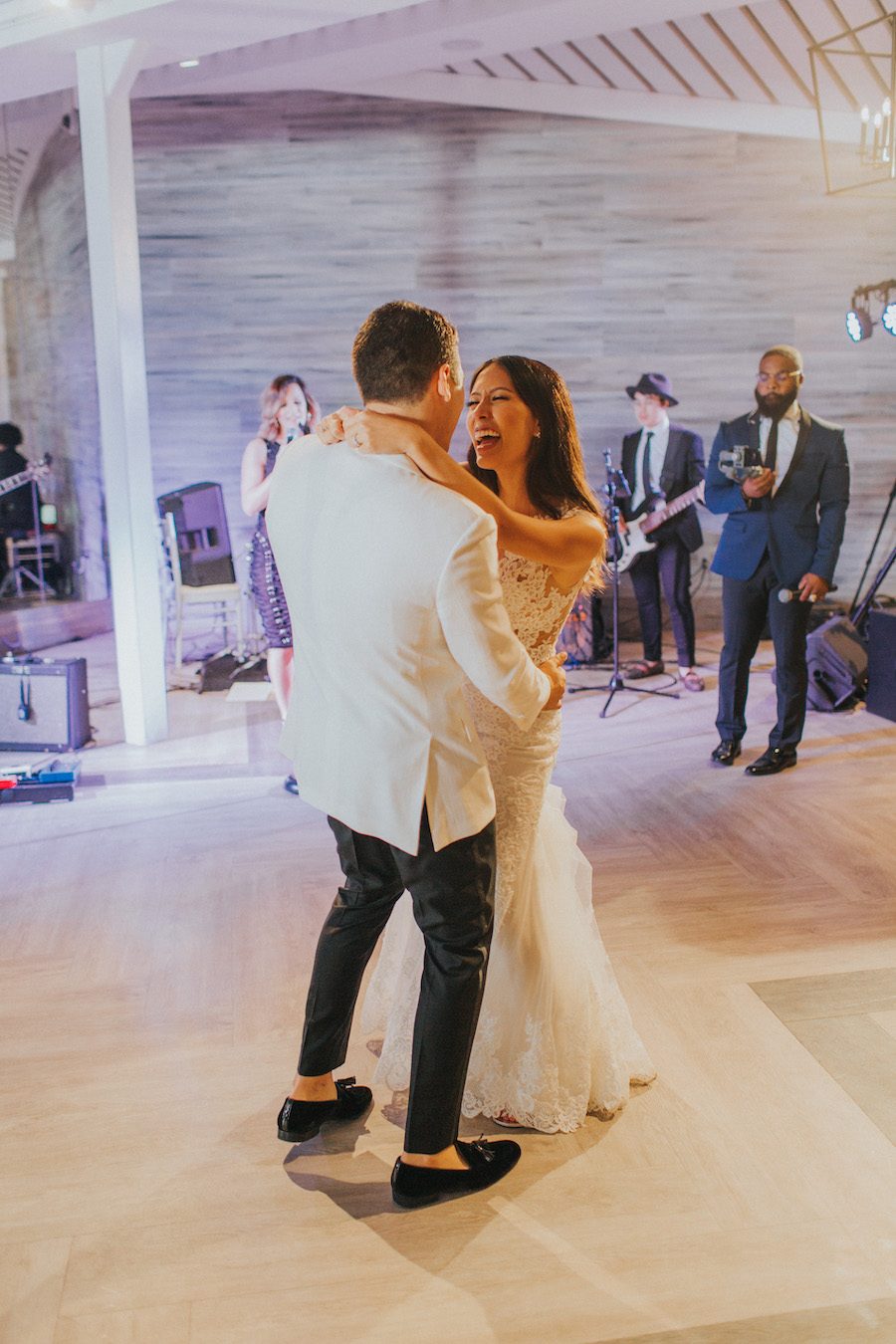 Rita and Drew had their first dance to “You’re Still the One” by Shania Twain. “We picked it because the lyrics talk about being together for so long and [say ‘I’ll bet they’ll never] make it,’ and that was kind of the epitome of our relationship because we had been together for such a long time and had started dating at such a young age,” Rita says.