Just two weeks before the bride competed in the Ironman World Championship. 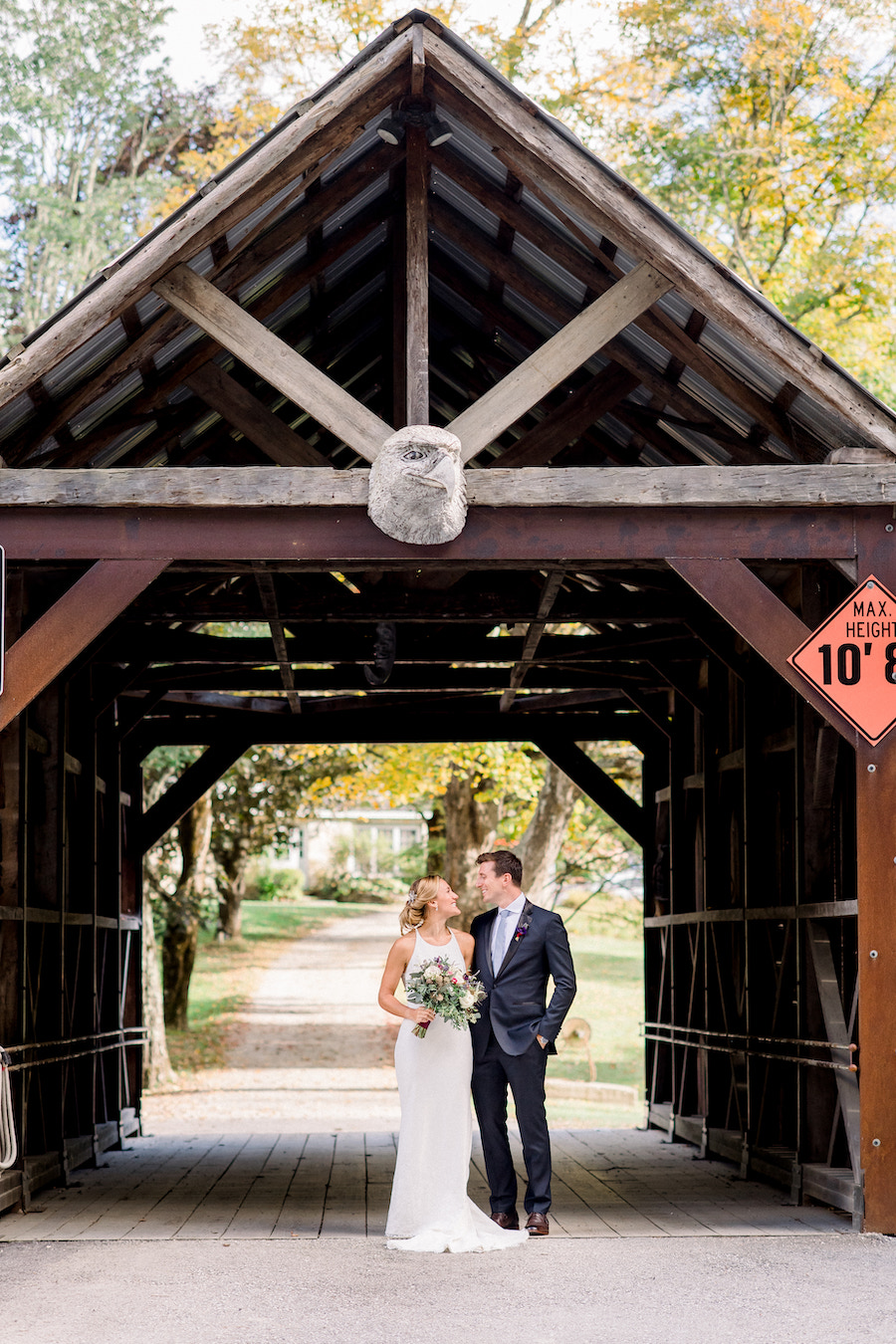 Ali Tercek and Matt Gallira met in 2009 at Dartmouth College, where they were both on the school’s rowing team and often spent time together at training trips and parties. “She totally wrecked me at beer pong one of the first times we hung out,” Matt recalls. They started dating casually when Ali was a senior and Matt a junior, but never made things official. That is, until Matt came with Ali’s family on their annual trip to Nantucket the summer after she graduated. “It was kind of like, ‘Oh no, now we actually have to decide what we’re doing,'” Ali says. One evening, the pair took a bike ride to Sankaty Lighthouse in ‘Sconset and stopped to stroll around and talk. “That is where we really officially decided to date,” Ali explains. “Which was necessary because, after that, we had to be long distance for a year while Matt was still at Dartmouth.” Ali spent the next year living in Boston and visiting Matt at college on weekends. Then, once he graduated, he moved to South Sudan for a three-month internship. “That was probably the hardest part of our relationship,” Ali explains. “We went from Boston-to-New-Hampshire long distance, to Boston-to-Africa. I think we talked three or four times on the phone the whole time.” Soon enough, though, Matt’s internship was over and he moved to Boston to be with Ali.

Years later, Matt went to Washington D.C., where Ali’s parents live, to talk to them about popping the question and ask for their help. “It’s kind of dorky, but it was important to me since they’re very central to her life and are great people,” he says. He decided he’d ask Ali to marry him at the top of Sankaty Lighthouse, where they’d solidified their relationship, but didn’t realize the space was closed to the public. “I just thought it was cute,” Matt explains. Luckily, Ali’s grandma, Allie, is a “staple” of the community, Matt says, so Ali’s parents were able to help make it happen. So, on a trip to Nantucket in August 2016, the couple biked to the lighthouse. When they got there, a friend of Ali’s grandmother’s was outside. “She was like, ‘We’re woking on something up at the top, do you want to go take a look at it?'” Matt recalls. Once they’d climbed up, Matt proposed. “I was totally shocked,” Ali says with a laugh. “Matt still makes fun of me because, in retrospect, he was definitely acting weird, and I should have been surprised that we were allowed to go up in the lighthouse. But I just thought it was a lucky coincidence.”

The bride always thought that she’d want to get married on Nantucket, but since the couple already had “such a special engagement there,” she says, they decided to tie the knot elsewhere. “We quickly realized our favorite place to go back to is the Dartmouth [and] Upper Valley area in New Hampshire and Vermont,” the bride explains. They began visiting venues near the school, but each one they saw felt far too familiar to the places they’d attended sorority and fraternity formals in college. But then they visited Riverside Farm. “The second we drove up, I was like, ‘Oh man, this is it,’ Ali says. “It just has the most stunning, huge field with amazing barns and trees. But it was also really refined, so it felt like we could capture our Dartmouth roots without being too full-on ‘college,'” Ali says. To let the natural beauty of their venue shine through, they kept the décor simple with loose, wild-looking florals and greenery as well as glowing string lights. “It blew me away how warm, welcoming, and romantic it was,” the bride says. And, while their wedding celebration was indeed significantly more sophisticated than their fraternity formals, the couple still brought plenty of revelry to the farm. “We had a 150-person conga line for a while,” Ali recalls. “Later, multiple people were like, ‘I never thought conga lines could be so fun.'” 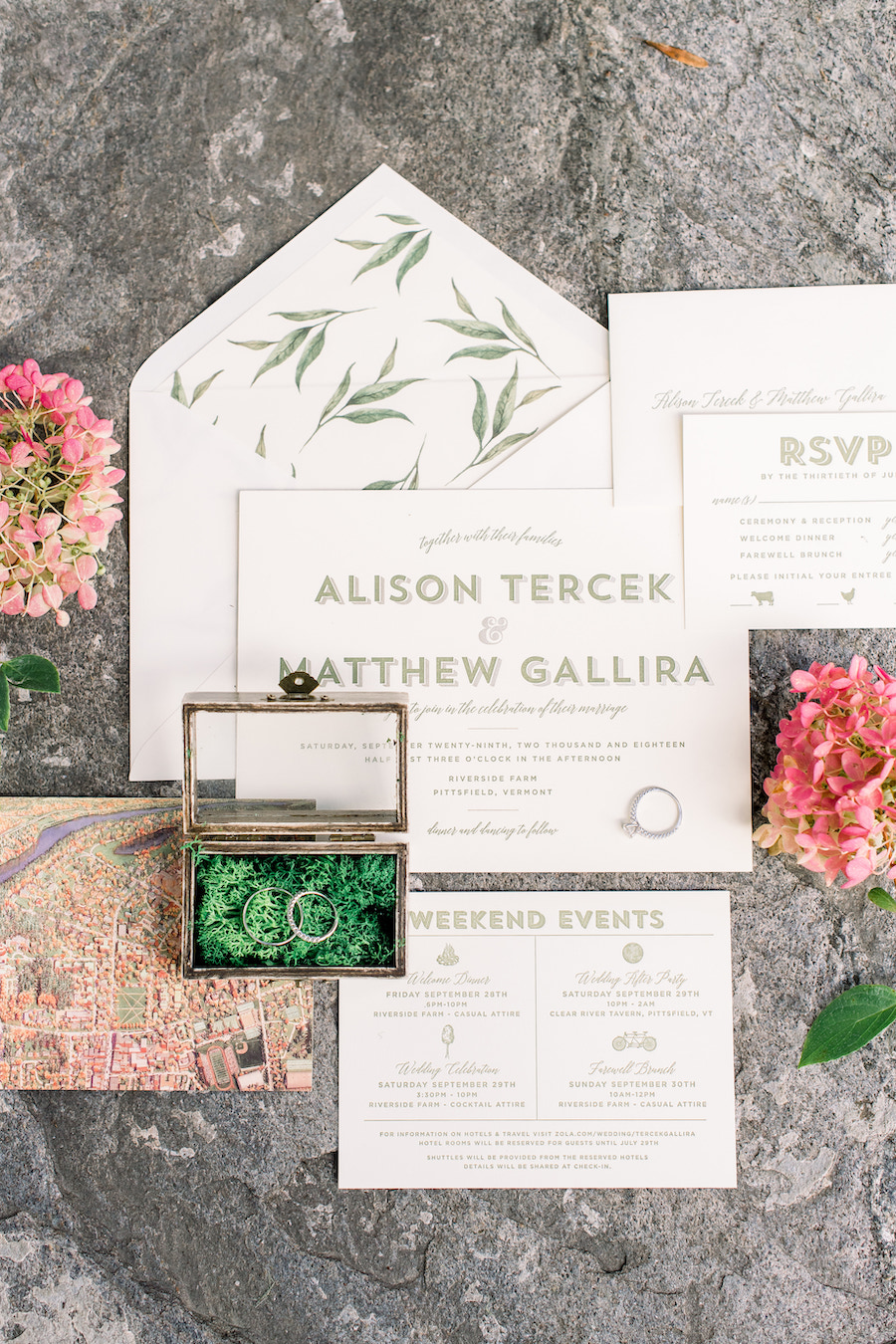 At first, the bride wanted their invitations to have a “dainty” look with soft script, but Matt wasn’t on board. Ultimately, though, they both fell in love with their design compromise: bold lettering for their names mixed with a smaller script throughout, plus leaf illustrations on their envelope lining. On the back of their events card, the couple included a map of the Dartmouth campus in fall. 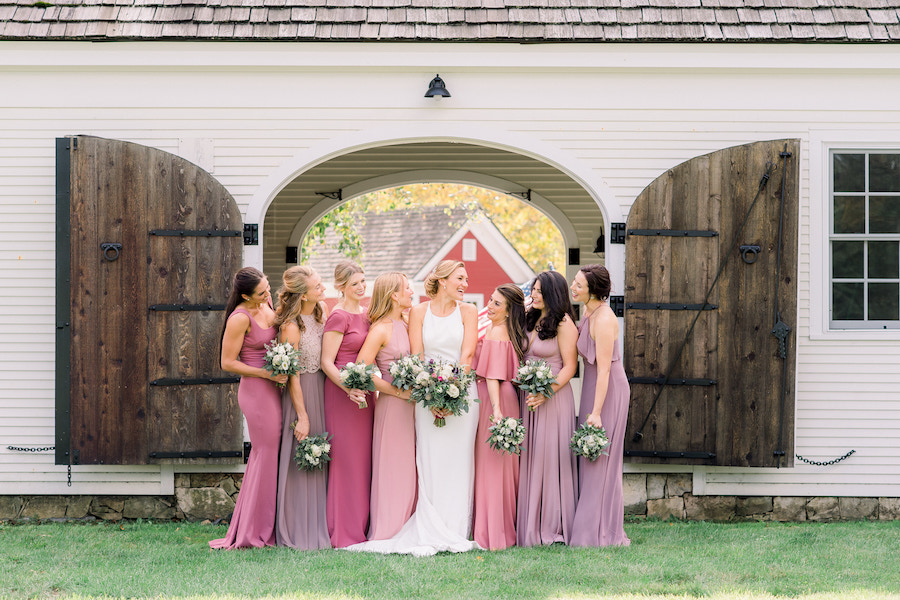 Ali let her bridesmaids choose their own dusty pink and purple dresses. “I work in research so I nerded out and made a big spreadsheet of 30 different dress options that I’d approved, with the styles, designers, and colors [listed], and sent it to my bridesmaids,” she says with a laugh. 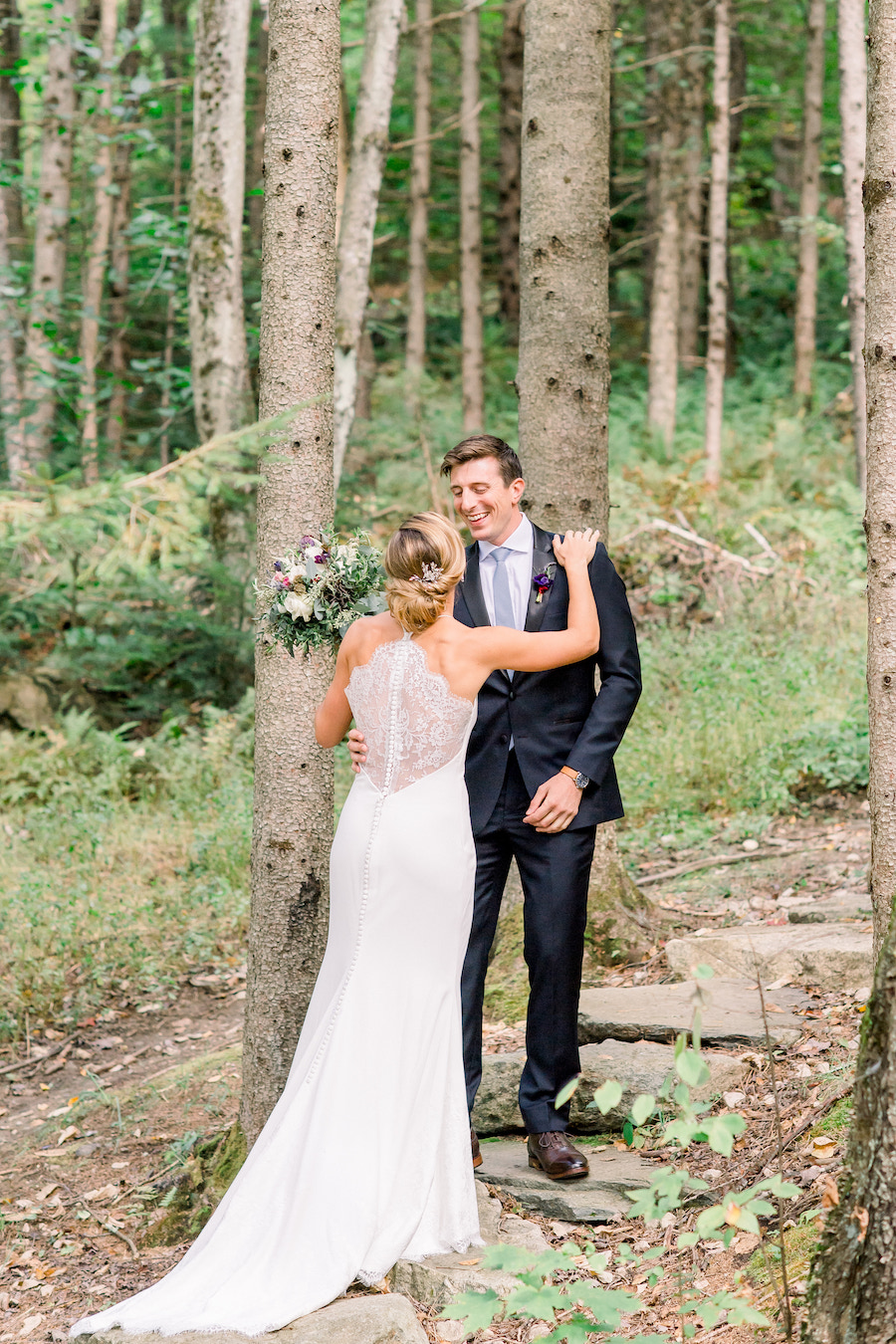 Two weeks after the couple’s wedding, Ali competed in the Ironman World Championship in Kailua-Kona, Hawaii. “I knew my body was going to go through insane changes, so I needed to make sure I picked a dress that both worked with my tan-lines and an insanely athletic shape,” the bride explains. She found her match in a sporty-yet-elegant Kelly Faetanini frock, though she “had to get it tailored, like, 10 times” as she trained, she confesses. 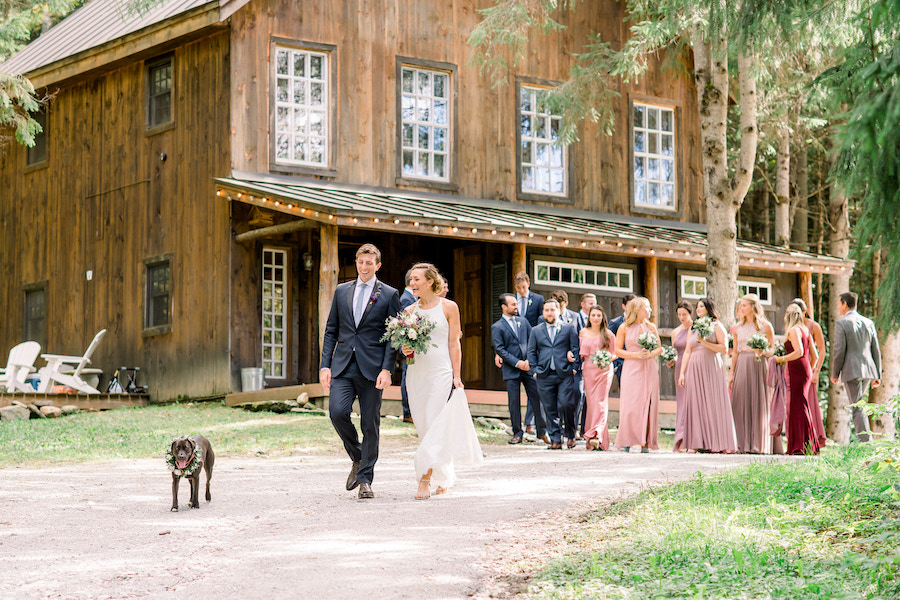 At the ceremony, the couple’s labrador, Daisy, walked down the aisle alongside Ali’s sister Margo. “When we were first looking at venues, we actually asked everyone if they’d allow dogs, even though we didn’t yet have [one],” Ali says. 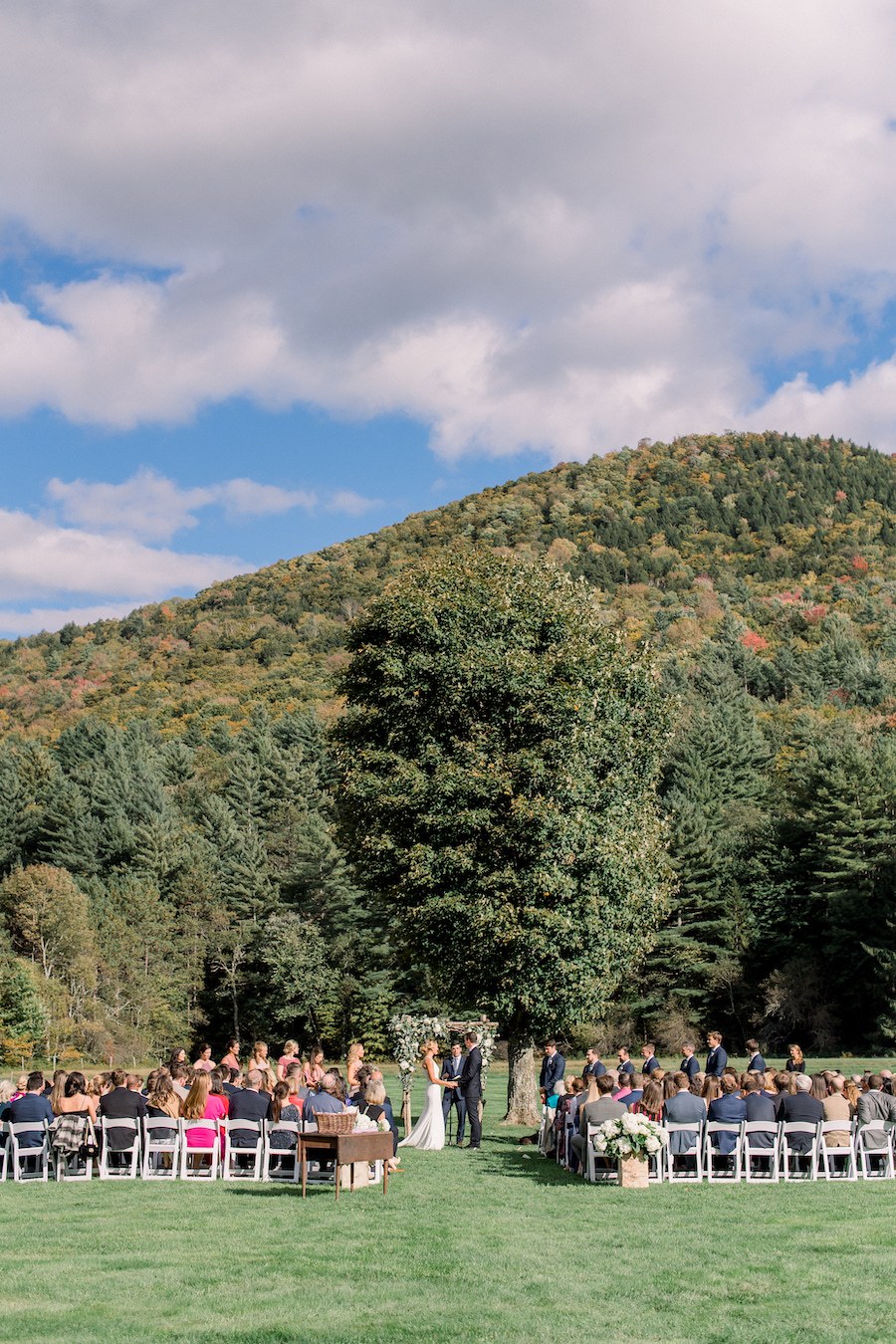 Matt’s former college roommate, Trevor, officiated the couple’s ceremony. “We knew he was the perfect guy, and we gave him no context and really did nothing, and he just killed it,” Ali says. “The entire [crowd] was sobbing. He made jokes, but was also so sentimental and authentic to us.” 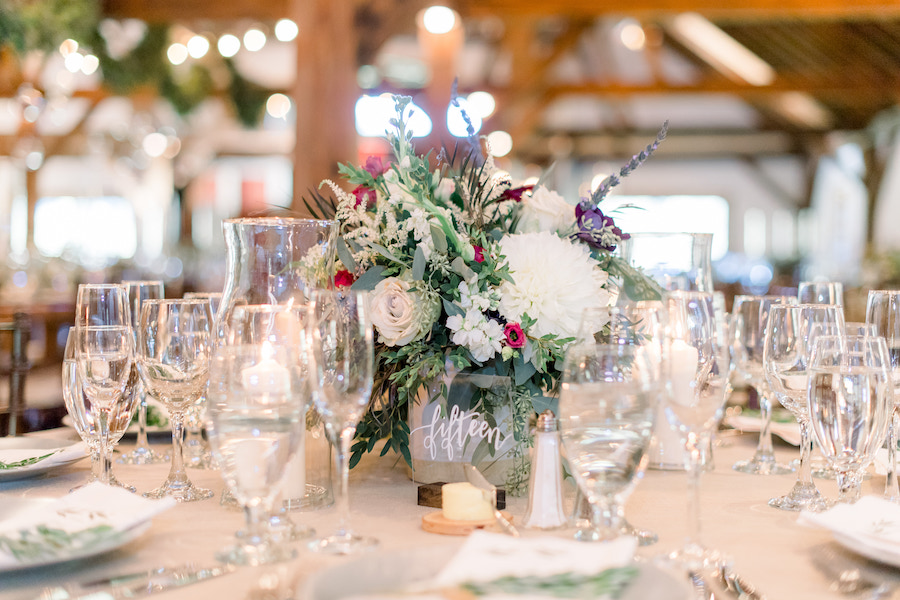 The bride and groom wanted to keep their centerpieces simple and natural-looking, and opted for arrangements of eucalyptus, rosemary, earl gray roses, anemones, lavender, and lisianthus. 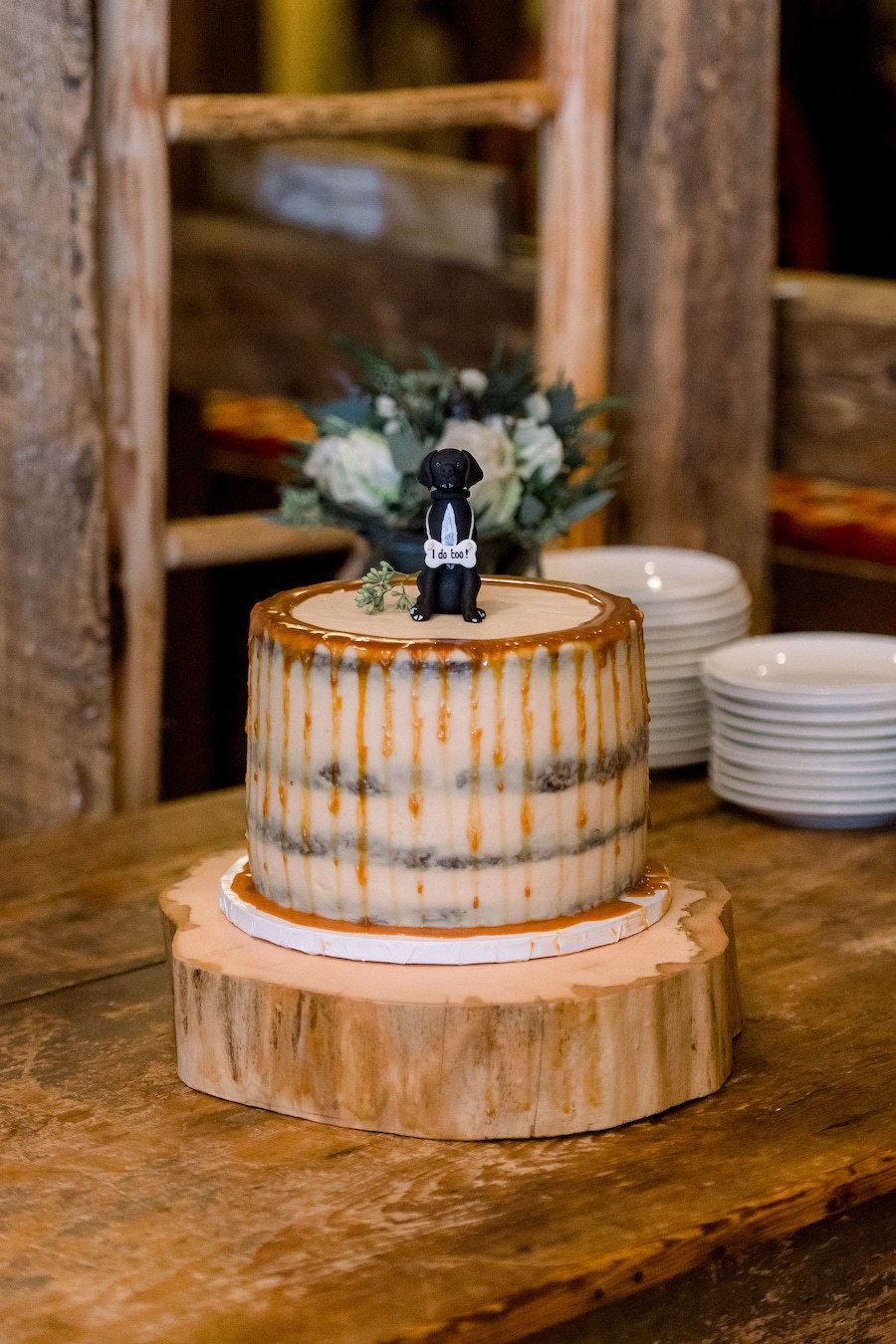 Ali’s best friend from college, Emily, owns her own bakery, so the bride asked her to bake the couple’s five wedding cakes. “It was awesome to have her delicious cakes and also have it be personal,” Ali says. They adorned one of the cakes with a black lab topper, which the bride purchased on Etsy and painted with white spots to match Daisy’s fur. 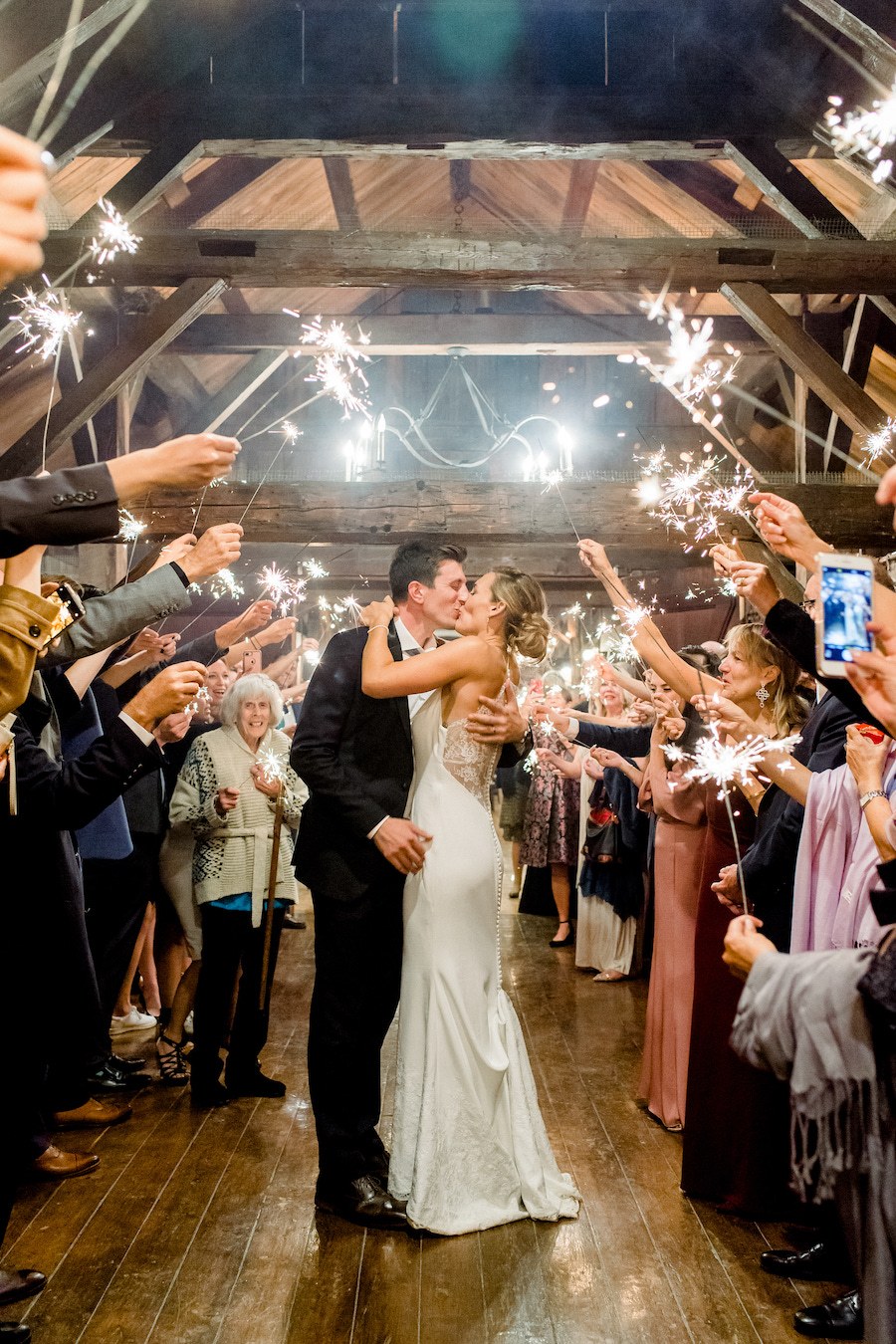 Before heading to their afterparty, the couple had a sparkler send-off. “We actually ran through too fast the first time, so we got to go through a couple of times,” the bride says.