The tent they set up on the lawn of Edith Wharton’s former home in Lenox is a must-see. 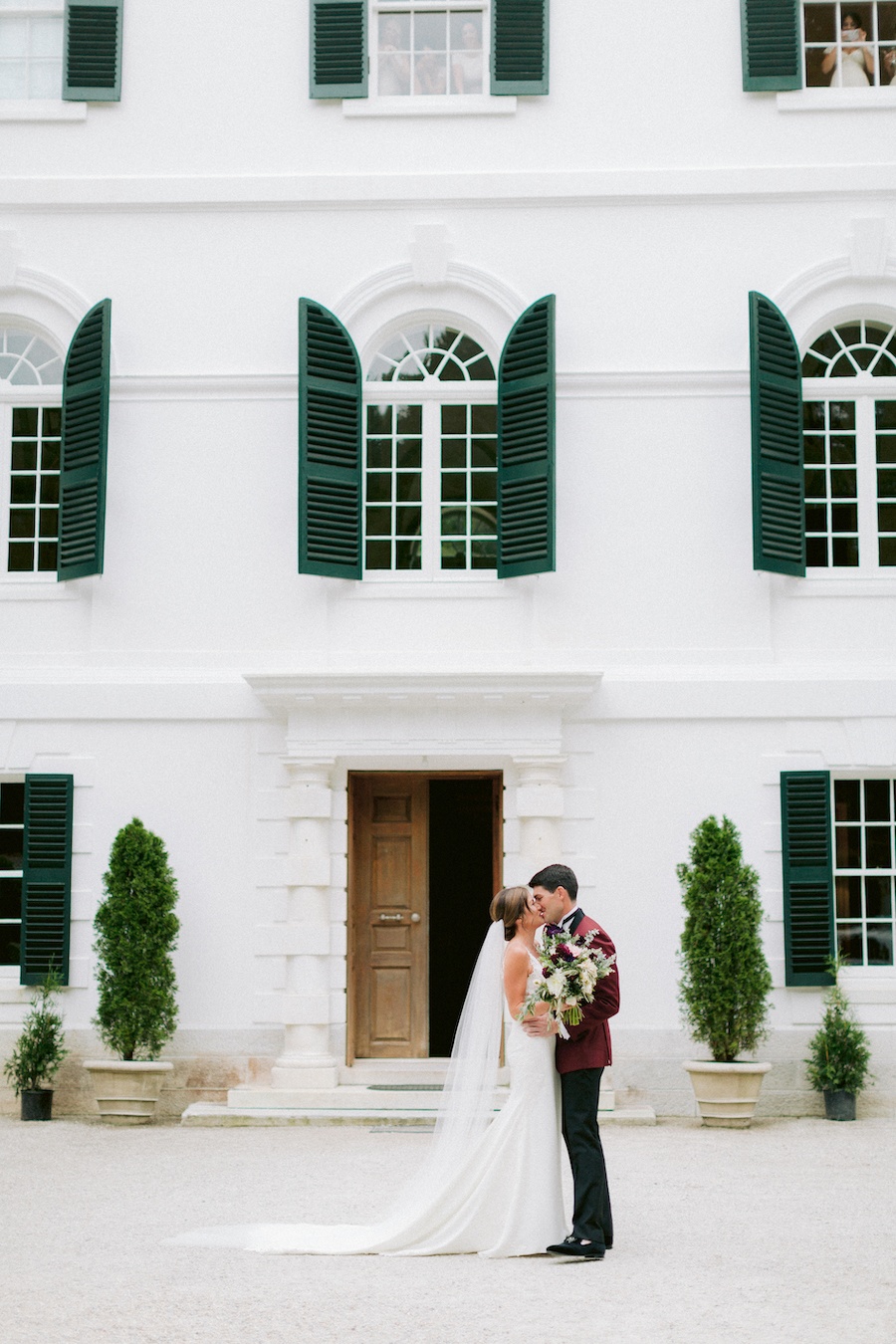 Before they became a couple, Emerald Finneran and Brian Davis were neighbors. He lived on the first floor of their house in South Boston and she lived on the third. They weren’t exactly strangers, though: His college roommate and her college roommate were brother and sister.While Emerald knew she had a connection to her downstairs neighbors, for a long time they didn’t meet. Until one day in 2013, when Emerald and her friends wanted to throw a barbecue for a friend’s birthday in their backyard. She got Brian’s phone number and reached out to ask if it would be okay to use the yard and then, in a gesture of neighborly goodwill, invited him and his roommates. After the party, they became fast friends and, soon after, a couple.

In May 2017, the couple was at Brian’s parents’ house on Cape Cod, getting ready to make a trip with friends to Nantucket. The two were on the dock packing up his parents’ boat together when Emerald started to ask Brian to speed things up a bit. “I was loading the boat giving him a hard time like, ‘What are you doing?'” But then, when she turned around, he was down on one knee. “I just started sobbing like a baby,” she recalls. “I didn’t see it coming at all.”

When it came time to choose a wedding venue, Emerald originally wanted to tie the knot near her family home in Ireland. She realized a destination wedding would pose a logistical challenge though, so the bride and groom instead set out to find a venue reminiscent of a European manor. The Mount, author Edith Wharton’s former country estate, was the first venue they visited. “We loved it and booked it right away,” the bride says. It had the historic character they wanted, plus beautiful gardens where they could host an outdoor ceremony. To tie in with the venue’s bygone feel, the bride and groom tasked Whim Events with bringing to life a celebration inspired by the Roaring Twenties. They got their vision with a stunning reception tent filled with antique-looking chandeliers and candelabras, plus abundant touches of gold, velvet, and wood. The festivities also lived up to the conviviality of the era starting right from the beginning when the couple entered their reception tent to “A Little Party Never Hurt Nobody,” from the 2013 film adaption of The Great Gatsby, through to the after party which featured wigs, glow sticks, pizza, and a DJ’ed dance floor. “We wanted it to be a really big party,” the bride says. 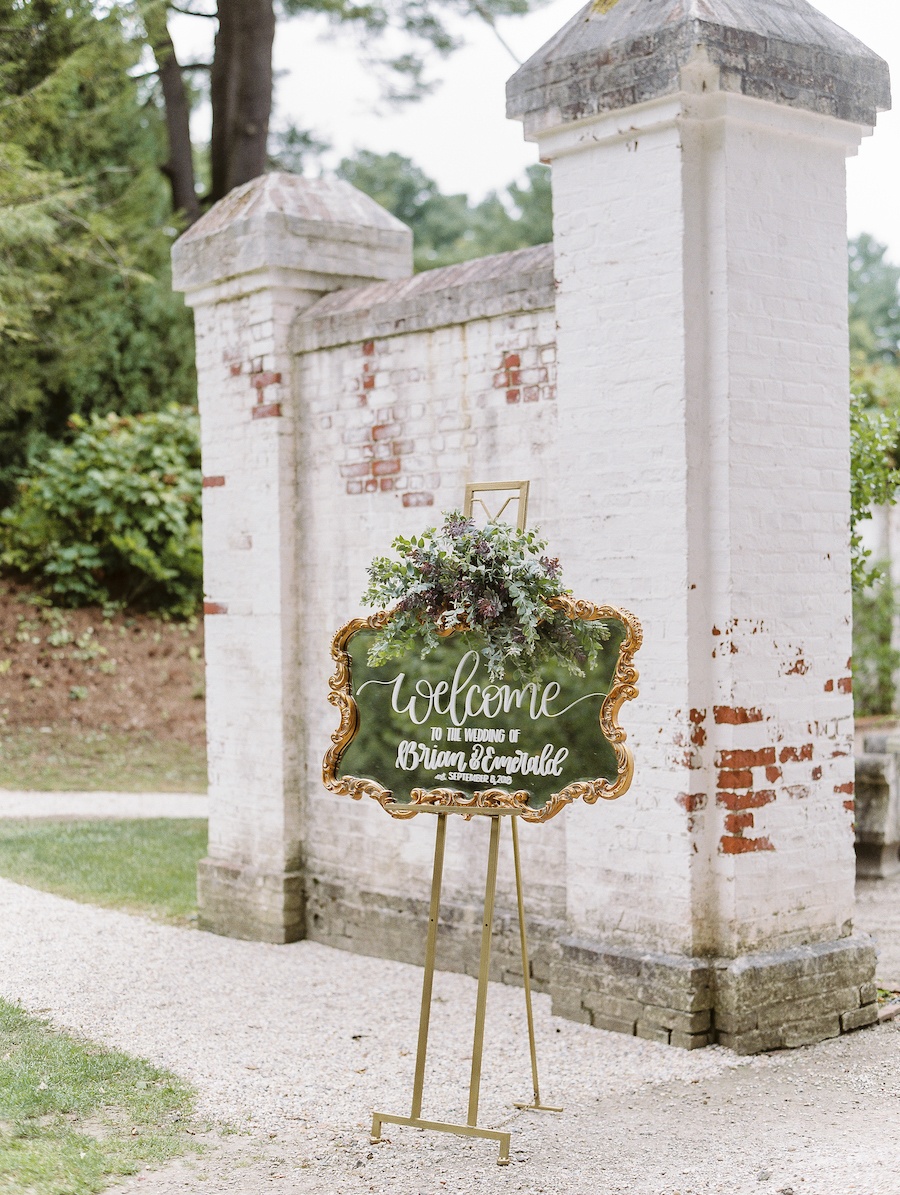 The bride and groom used vintage mirrors for their welcome sign, seating chart, and table numbers, all hand-lettered by Antea Amoroso. 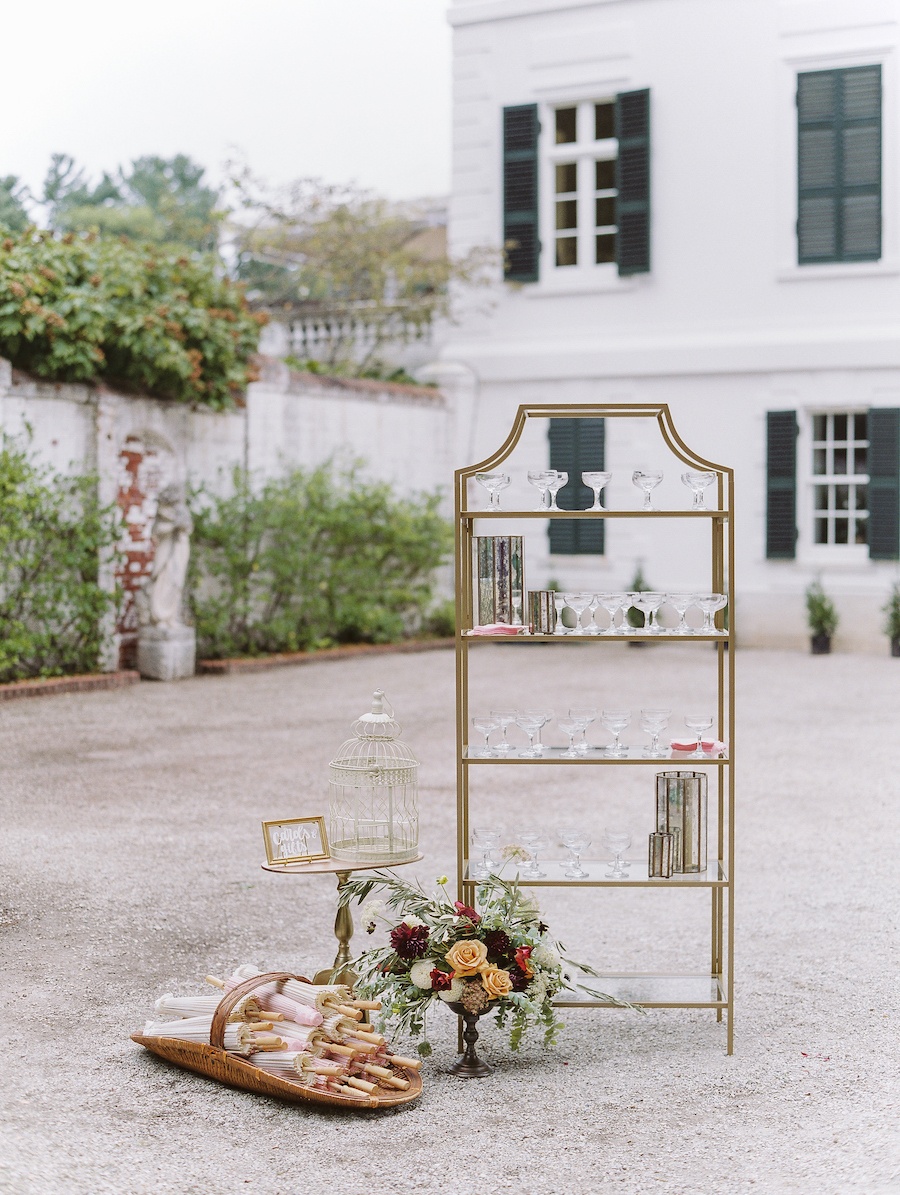 Guests arrived in the forecourt to the sound of a string quartet, and were met with glasses of sparkling rosé as well as a basket of parasols to help shield themselves from potential rain or strong sun. 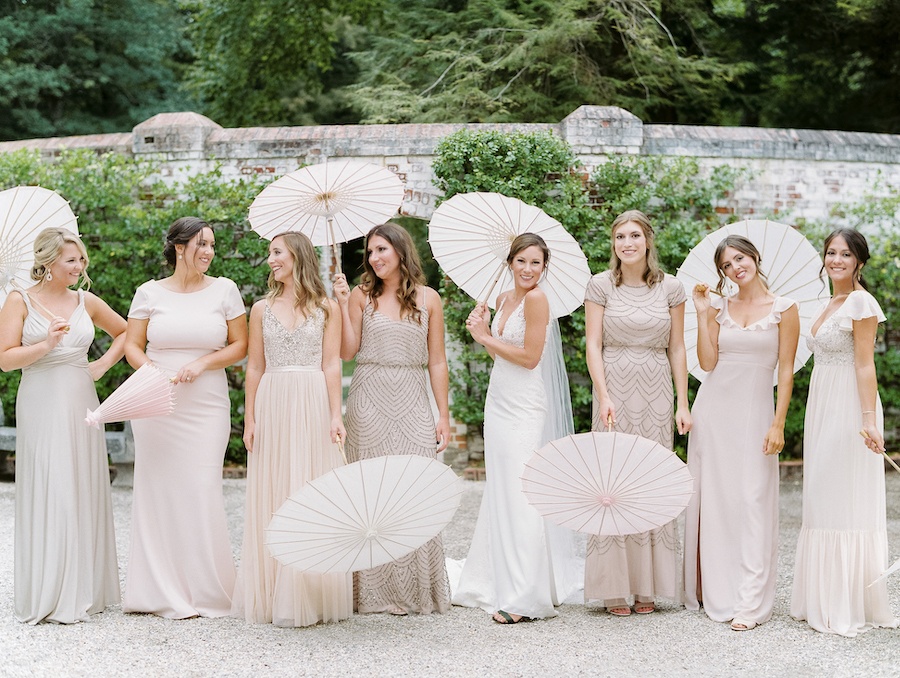 Emerald wanted her bridesmaids to wear champagne-hued, vintage-inspired gowns, but also wanted them to be comfortable, so she let them each choose their own frock. 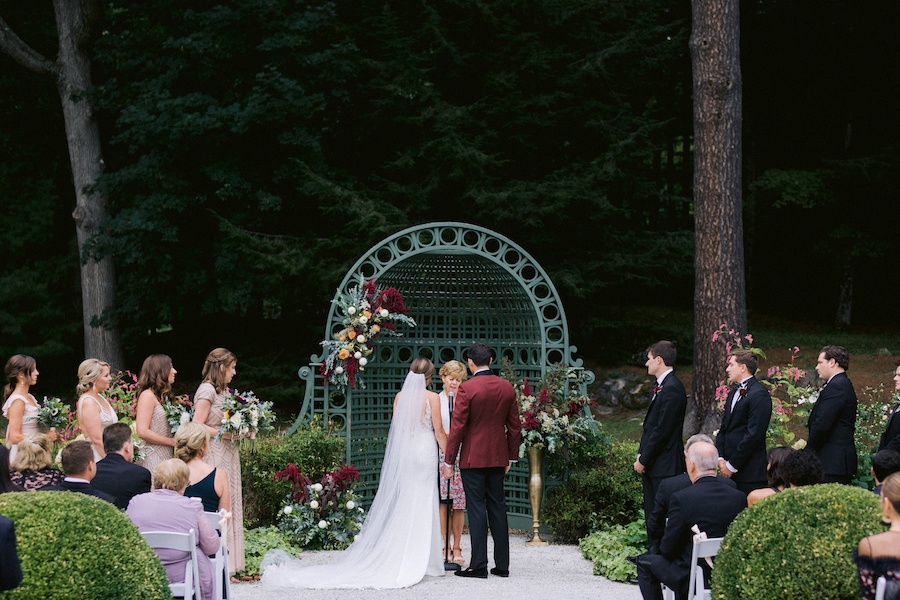 The bride and groom said their vows in the French Flower Garden in front of an arbor adorned with burgundy blooms. “We’re outdoorsy and very into nature so I just wanted it to be in the garden and to be very relaxed,” Emerald says of her ceremony. 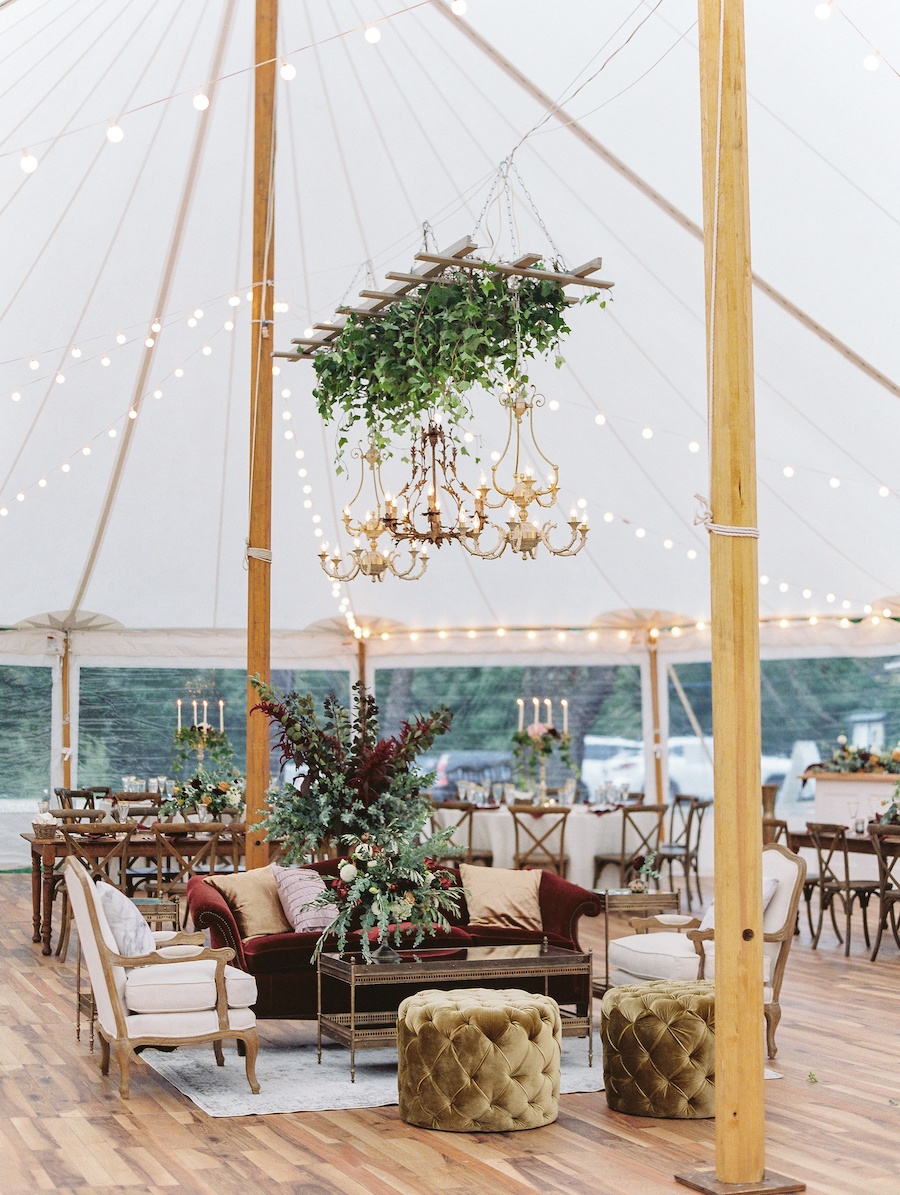 Whim Events outfitted the reception tent with lounge seating in blush, gold, and burgundy hues, as well as with suspended trellises hanging chandeliers. 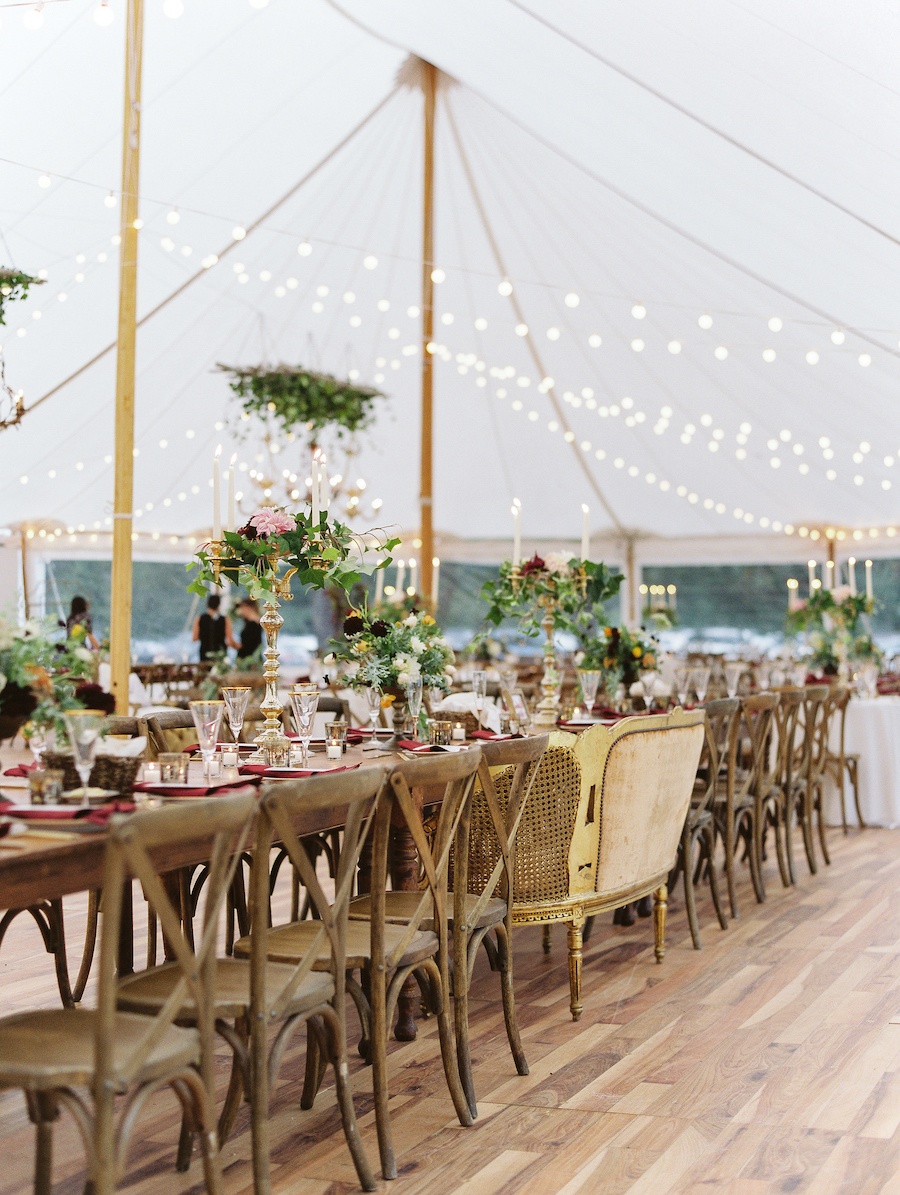 “It was Great Gatsby meets organic and natural,” Emerald says of the décor under the reception tent on the lawn. The couple’s tablescapes featured burgundy and blush florals, vintage goblets, gold-rimmed glassware, and brass candelabras. 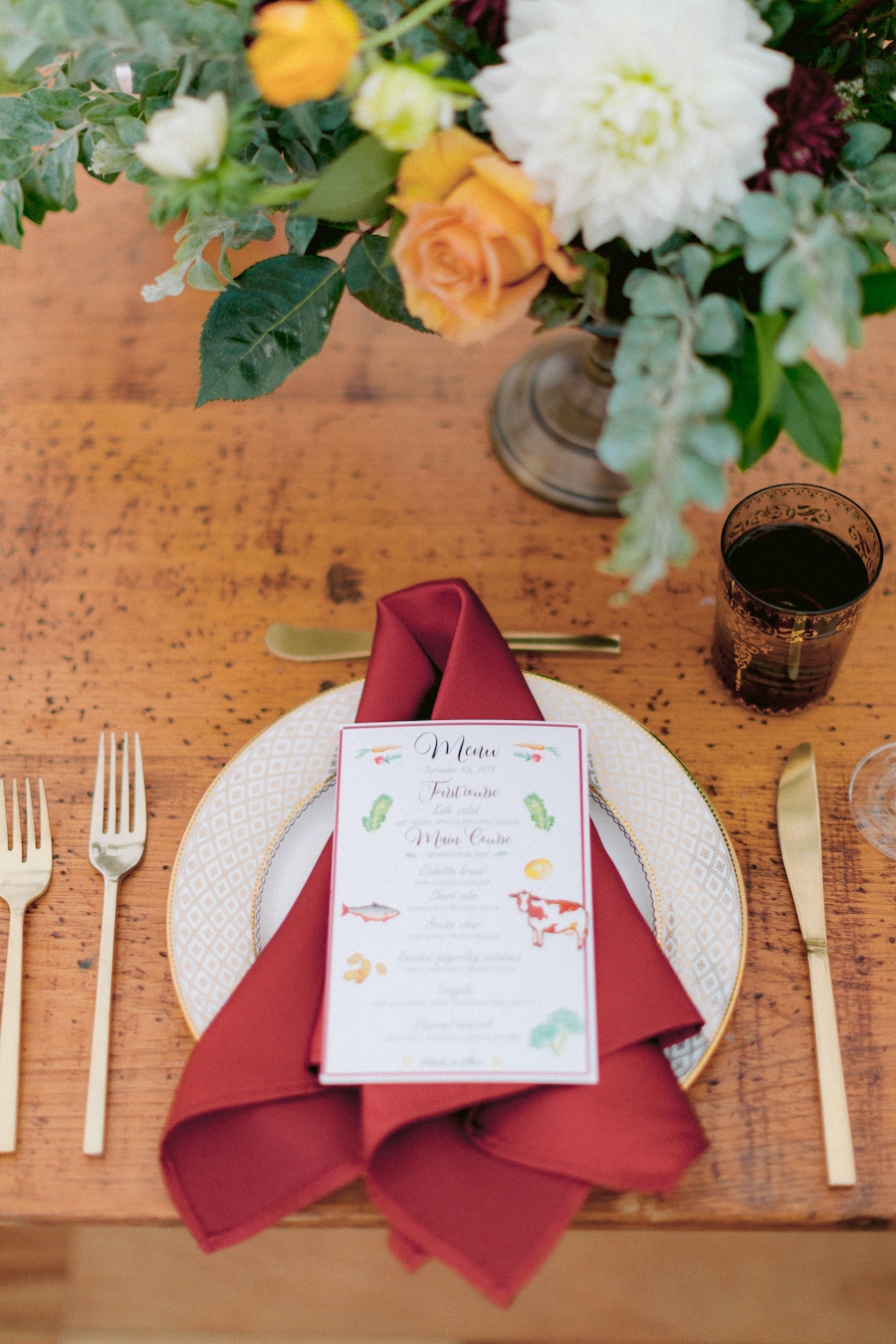 The bride’s cousin Haleigh, an art student, designed the couple’s watercolor-illustrated menus as well as their save the date cards. 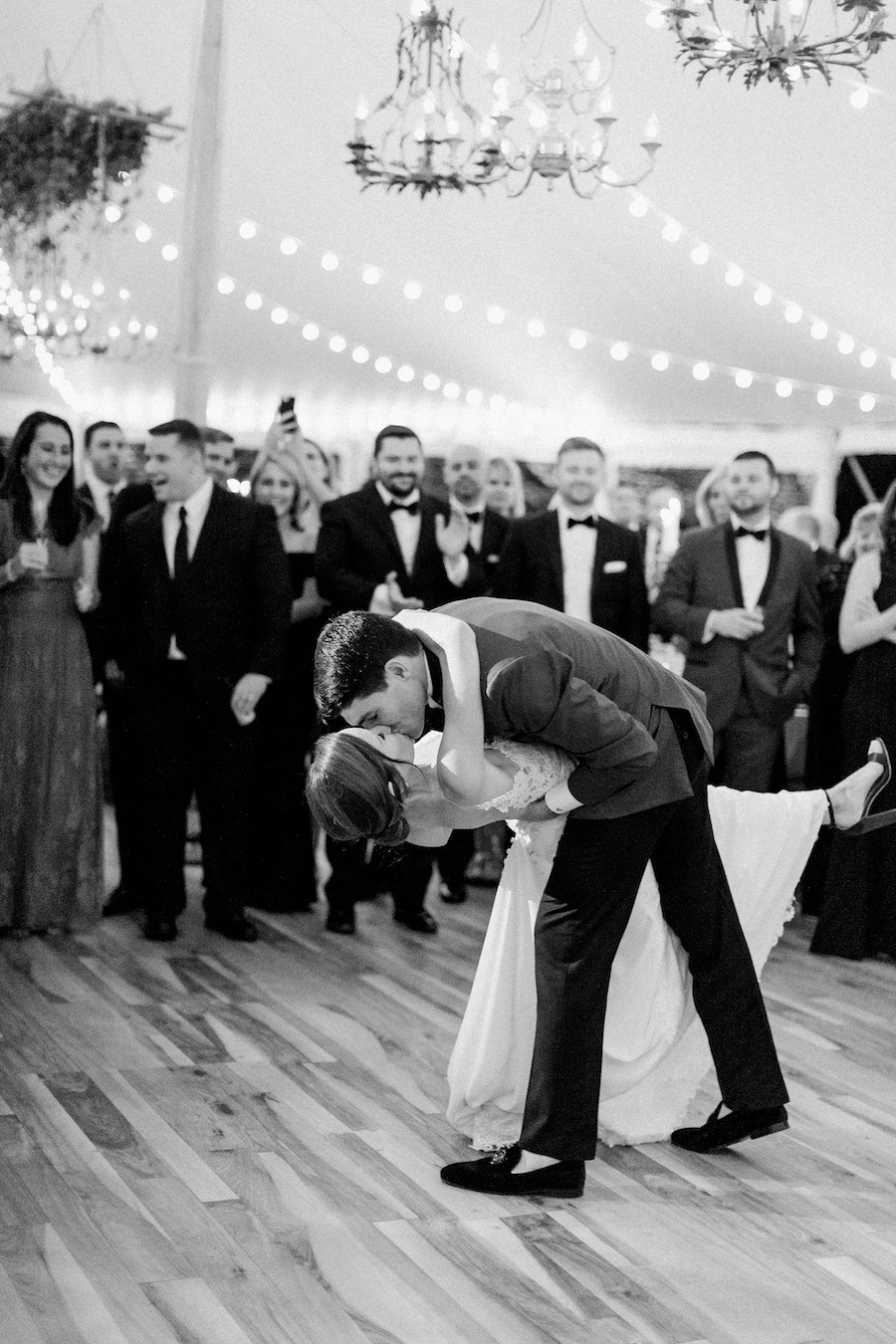 Emerald and Brian had their first dance to “Yours” by Russel Dickerson, played by their guitarist friend Derek, who also entertained the crowd during cocktail hour.