And the result? A charming, nature-filled soirée. 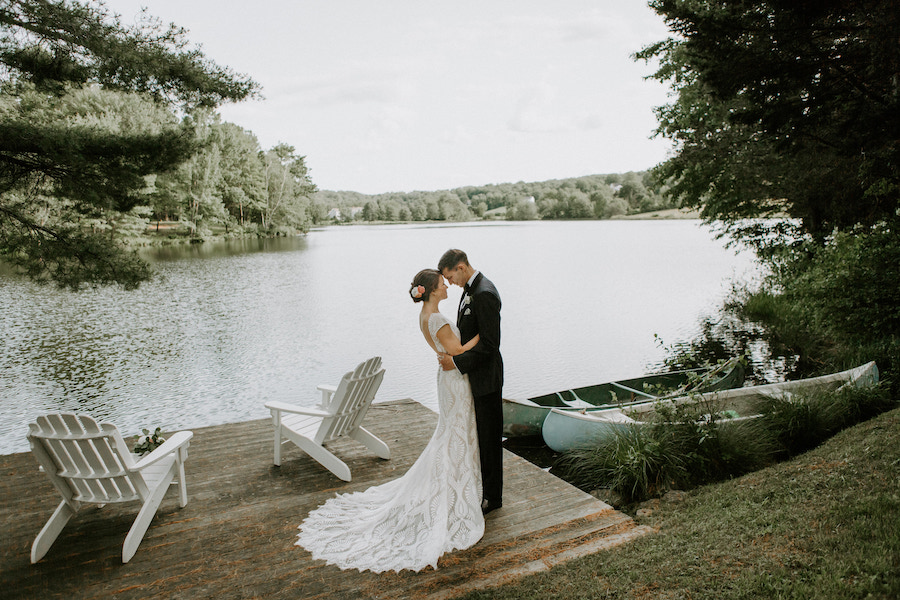 Holly Bailey and Chris Visentin first met as students at Hamilton College. They were both on the crew team, but were merely friends. “I don’t think we thought we were going to date,” Holly explains. They kept in touch after graduation though, and in 2014, Chris traveled from Boston to Philadelphia to visit Holly. “We realized we liked each other,” she says. They started dating right away, visiting each other every month before Chris eventually graduated and moved to Philadelphia to be with Holly.

By 2018, the couple had relocated to Connecticut. On a typical Sunday morning in July, Holly decided to go for a run, and when she got back Chris was making breakfast. Then, before they sat down to eat, Chris got down on one knee right in their living room. “I just started crying,” Holly says. “He really caught me off guard.” But, for them, it was the perfect proposal: “As tempted as I was to plan a big event or a grand gesture, that really isn’t our way,” Chris says. “There is something just as meaningful buried in the little moments at home—drinking coffee, listening to records, and simply enjoying being together. I wanted to make one of those little moments just as big as they’ve always felt to me.”

From the beginning, the couple knew they wanted to get married on Holly’s family’s property, a former dairy farm in Washington, Connecticut. Secondly, Holly—who says she’s really “gotten into crafts” and “loves making things”—knew she wanted to create much of her wedding décor herself, along with help from her mom, Betsy. The DIY process was an important part of the couple’s overall goal: to make their day feel as personal as possible. “We wanted to reflect our personalties in all aspects of the wedding,” Chris says. “We didn’t want it to be a stock wedding.” They opted for a natural, rustic feel for their décor and filled the property with abundant greenery as well as homespun elements such as hand-dyed ribbons and escort cards made with a typewriter. “It was a whirlwind,” Holly says of the wedding day. Chris agrees: “We were relieved that everything came together and was how we imagined it,” he adds. “All the little decisions we made really worked together.” 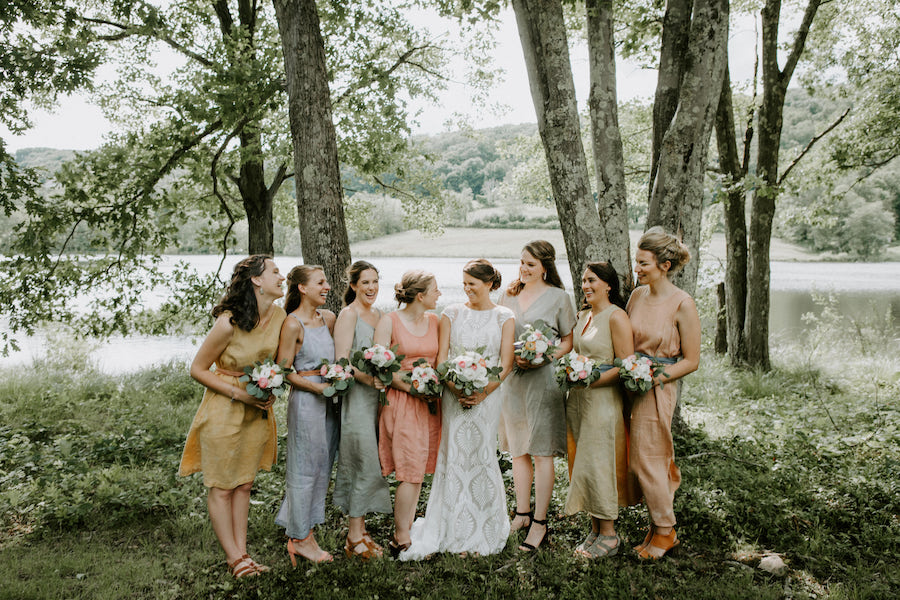 Holly requested that each of her bridesmaids buy a white linen dress, which she then hand-dyed using natural pigments. “My mom encouraged me to use all of the colors instead of just choosing some colors,” the bride says. “[I liked it] because it wasn’t a traditional wedding color scheme. It was more of a rainbow.” 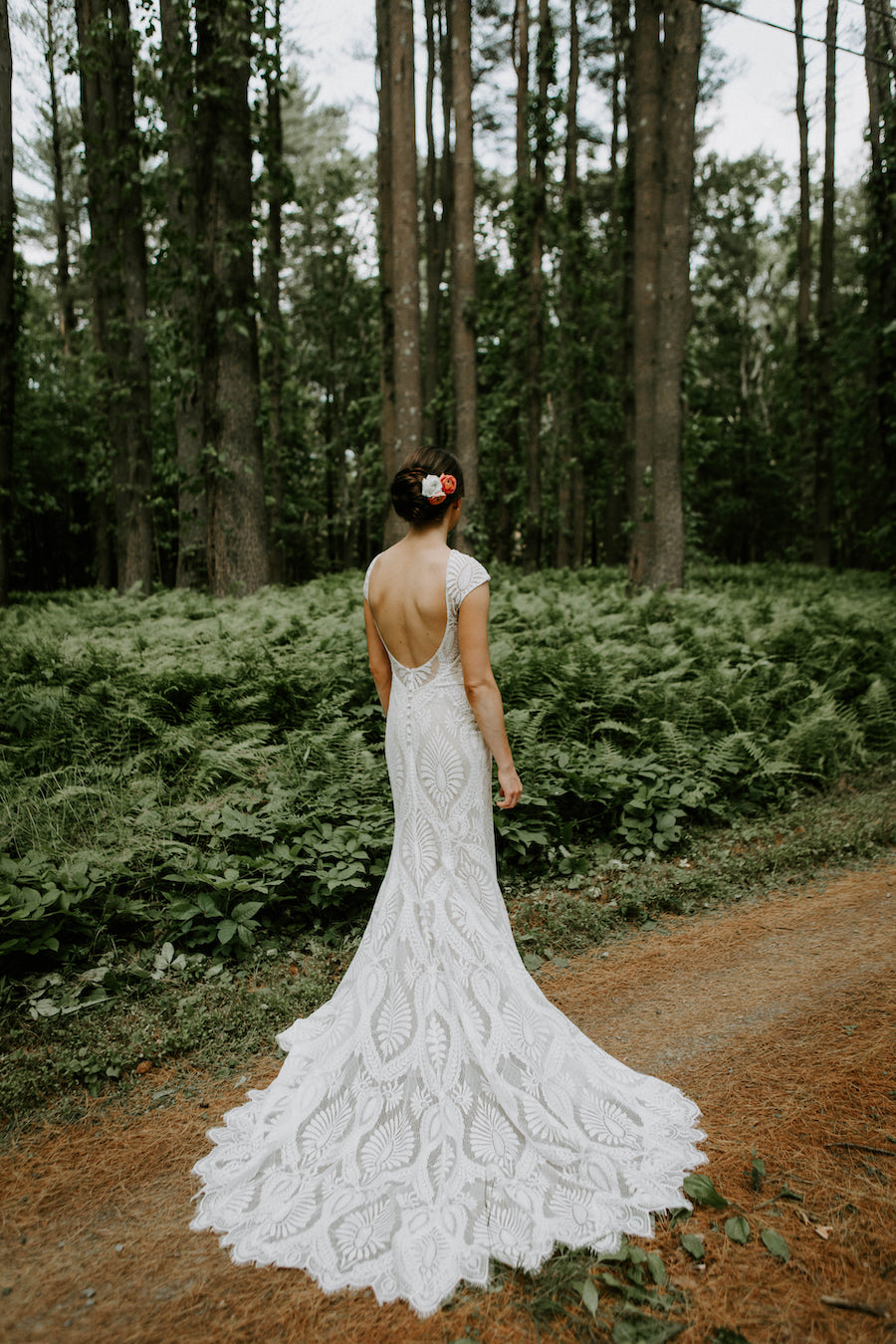 Holly didn’t know exactly what she wanted her wedding gown to look like when she first started shopping, but knew that she was attracted to unique lace patterns. She found a frock that fit the bill at BHLDN. 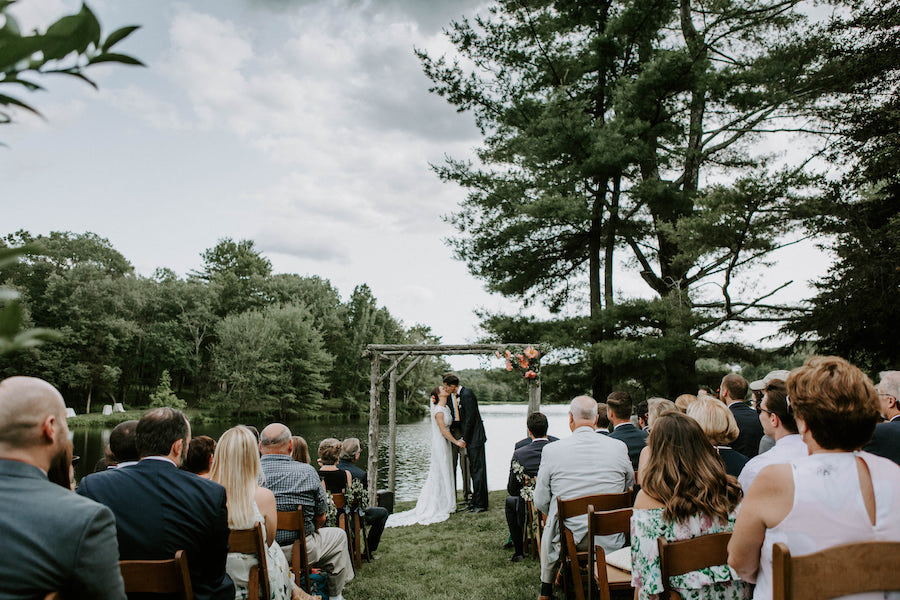 The couple wanted their ceremony to be “relatively simple and something that would resonate with everybody,” Chris says. For their readings, the groom, who is an English teacher, selected works by Søren Kierkegaard and William Butler Yeats. 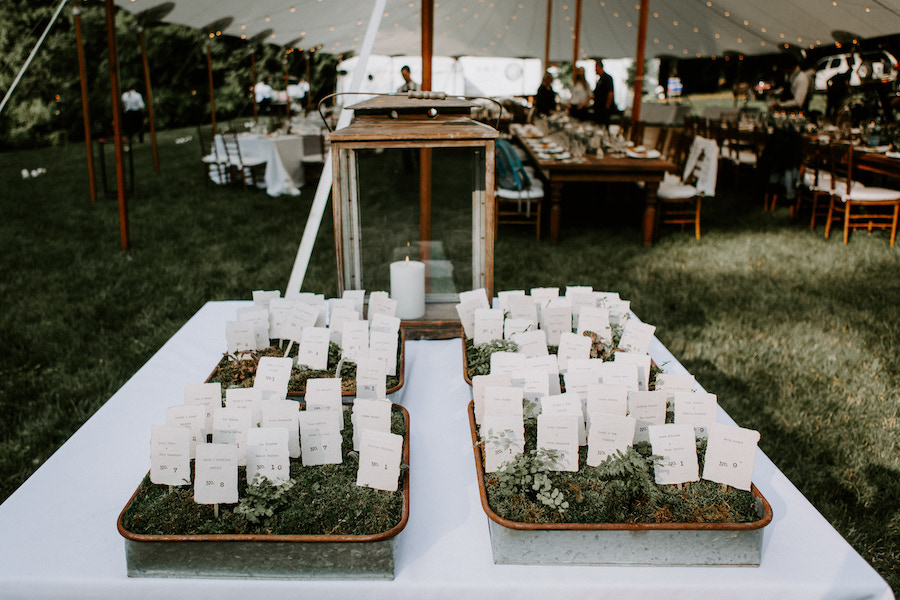 Holly and Chris created their escort cards using an old typewriter. Holly’s mom, inspired by the wedding’s wooded location, came up with the idea to plant each of the cards in a bed of moss and ferns. 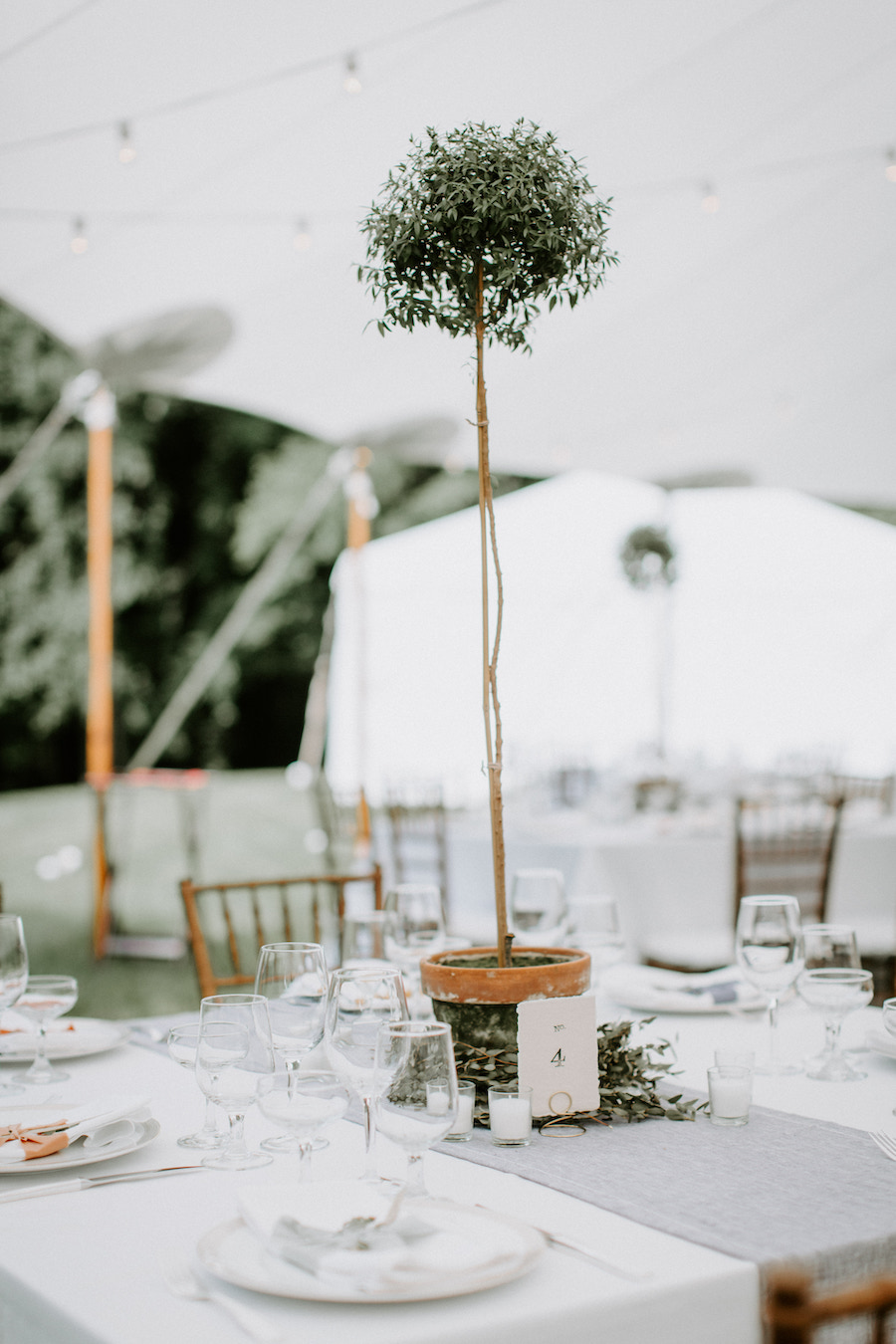 Potted topiaries served as centerpieces for the square tables at the reception, whereas long garlands of greenery adorned the wood farm tables. 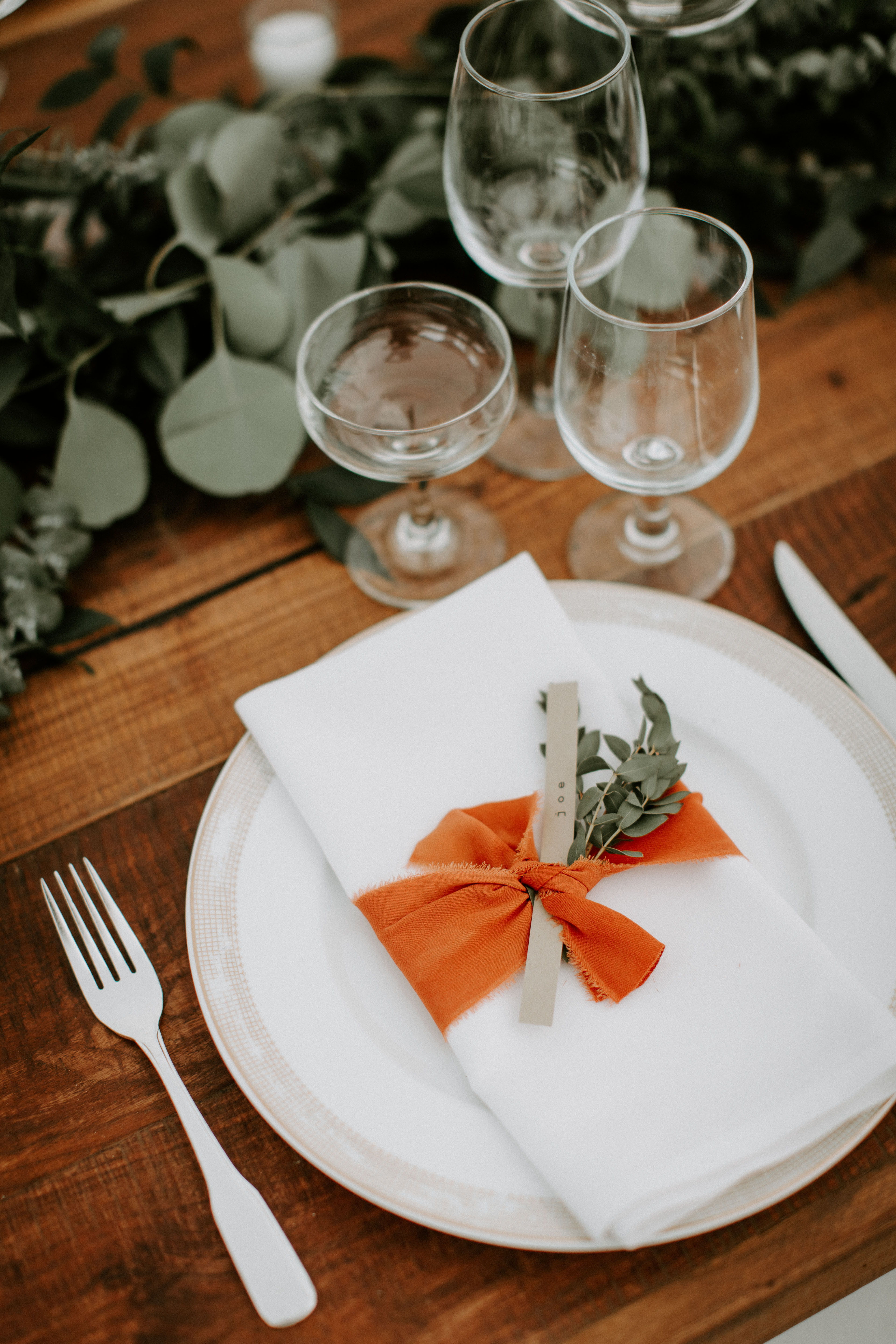 Holly dyed the cloth ties that wrapped around the napkins at each of the place settings at the reception. “It kind of continued the [DIY] theme,” the bride explains. 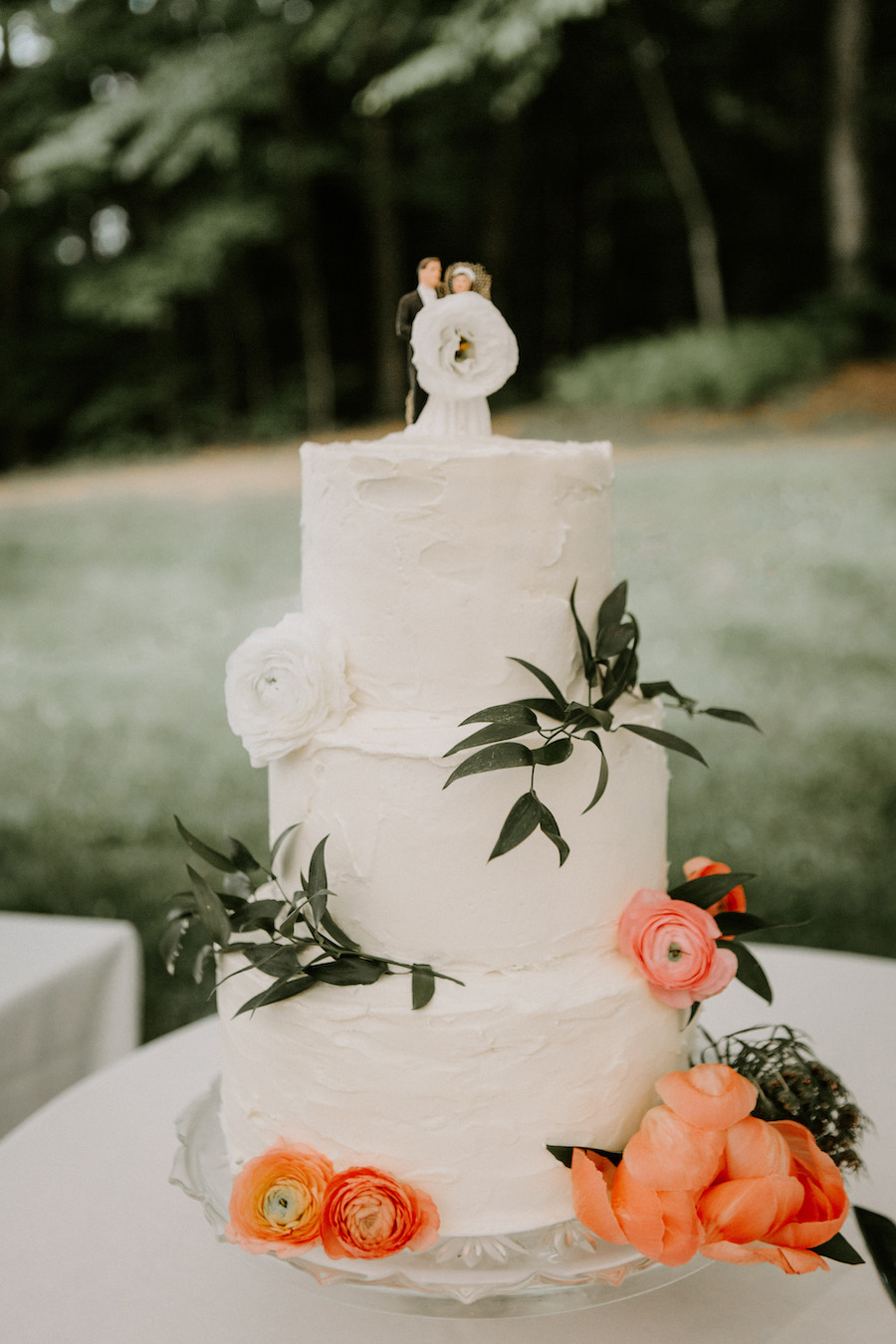 Holly baked the couple’s three-tier carrot cake, which featured orange-blossom cream cheese frosting and a topper that had also perched atop Chris’s grandparents’ wedding cake. Holly and Chris also served mini cupcakes and a gluten-free cake baked by the bride, as well as cookies and petit fours. 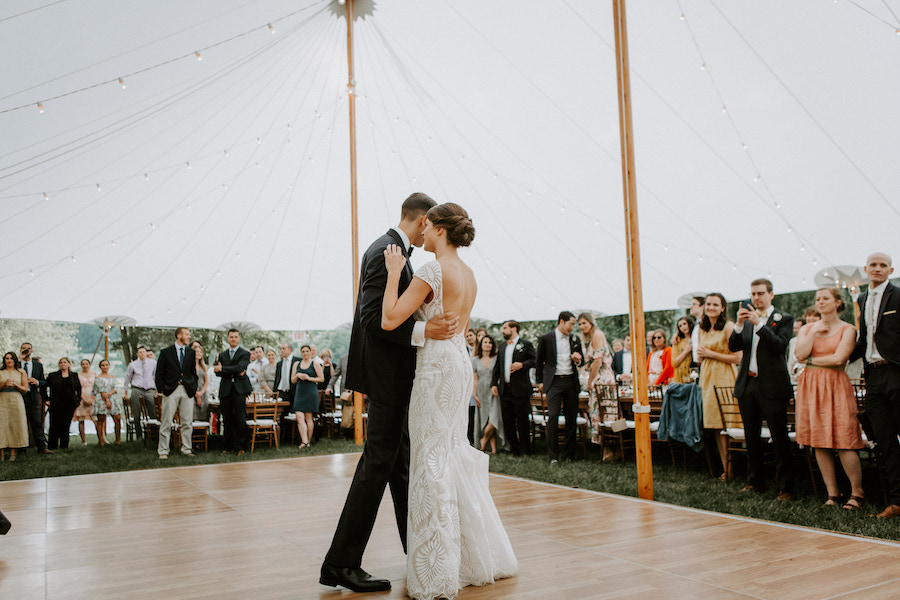 The bride and groom had their first dance to Peggy Lee’s version of “Ain’t We Got Fun,” a song that F. Scott Fitzgerald quotes in The Great Gatsby. “I looked up the song a long time ago and I always liked the sentiment of it,” Chris explains. “All these things aren’t necessarily going as you’d exactly want them to, but the two people in the song are still enjoying life.” 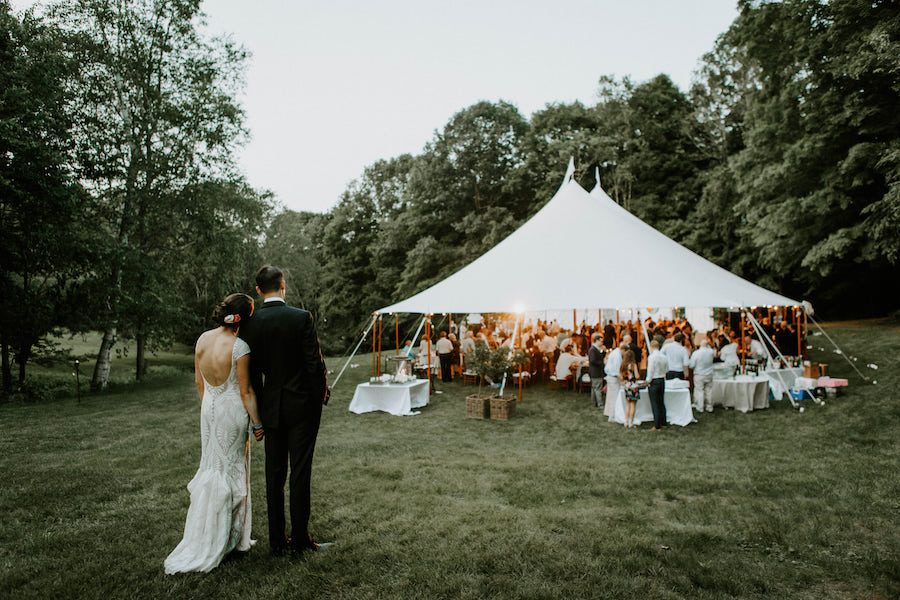 “The moments we didn’t have to rush around and could see and speak to people were the nicest,” the groom recalls. “Those little quieter moments are the ones I really remember.”