Complete with an apple cider station and a must-see bouquet. 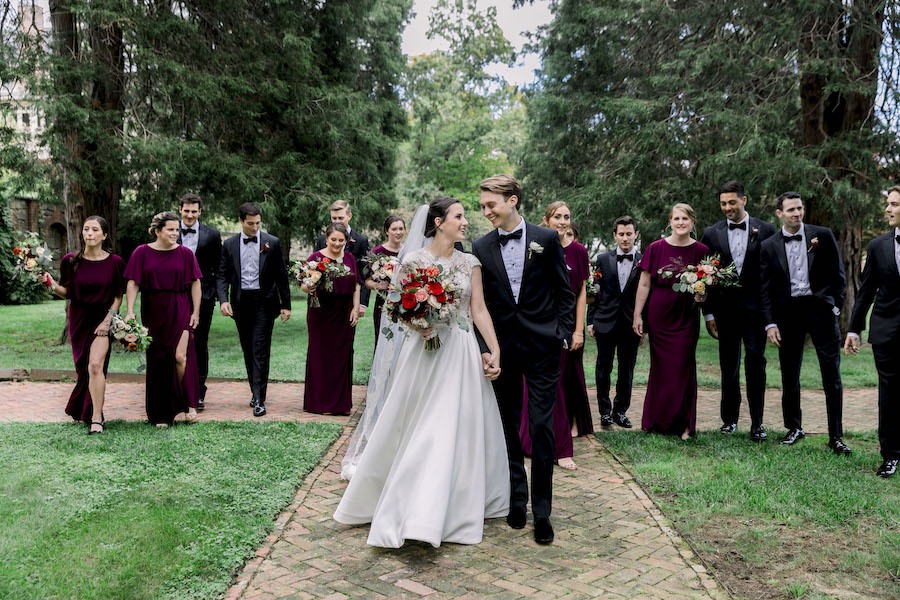 Shannon Baker and Tommy Christmas met because of a mistake at work. They’d started at PricewaterhouseCoopers the same week and found themselves in a training room together. In the room, there was a group sign-in sheet alphabetized by first name, which meant Shannon’s name was directly above Tommy’s. “I accidentally signed my name in his box, so he walked across the room to find me and asked me to cross my name out and sign again,” Shannon recalls. After that, they started to get to know each other and go out for drinks with their coworkers. Then, about a month later, they had their first date. “I’m convinced she signed the wrong box on purpose,” Tommy jokes.

About a year into their relationship, Tommy says he knew he’d “be marrying Shannon at some point.” It wasn’t until a few years later, however—after they’d moved in together and gotten a dog—that he felt it was time to pop the question. For their first dating anniversary, Shannon gifted Tommy a memory book filled with photos and ticket stubs from places they’d gone together that year. Neither of them kept up with updating it though, so in 2017, Tommy added mementos from the prior four years. Then, on the last page, he wrote “What’s next?” On a Saturday morning, he called Shannon out of bed and said he wanted to show her something. It was the book. She started reading through it, and when she got to the last page Tommy got down on one knee. Shannon began crying on the spot. “When I tell the story everyone says, ‘How did you not know?’ but I was so tired I had no idea,” she explains. “When I got to ‘What’s next?’ I thought he was surprising me with a trip to Italy or something. Then it turned out way better, obviously.”

As the couple began planning their wedding, they envisioned an outdoor setting that would evoke the feeling of an enchanting castle or a romantic Tuscan villa. When they visited the Mansion on Turner Hill, an Elizabethan house set on 300 acres of land with gardens and ivy-covered stone archways, it had everything they wanted, Shannon says. Since fall is the couple’s favorite season, they set the date for October 6 and leaned into an autumnal theme with a color scheme of rich reds and touches of gold and cream, as well as abundant greenery. At their reception, where the signature drink was a pumpkin beer with a cinnamon-sugar rim, “No one left the dance floor all night,” Tommy recalls—which was exactly what the bride and groom wanted. When the evening came to an end, “It was hard to believe it was over,” Shannon says. “But it was magical. It was everything we wanted.” 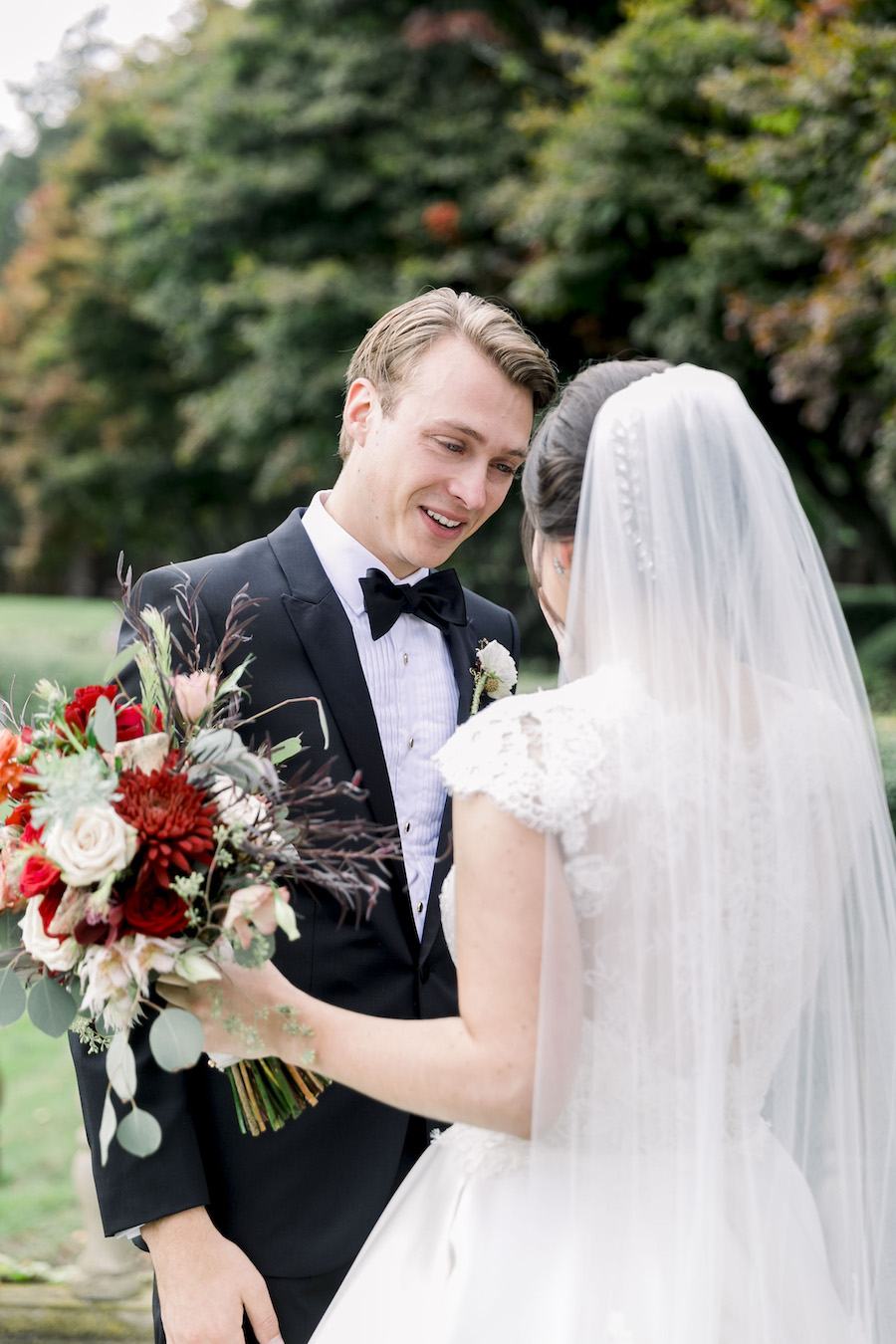 “We probably had the best moment of our lives during the first look,” Shannon recalls. “I remember my photographer was walking me out, and as soon as I saw [Tommy] I started shaking. I remember her being like, ‘Are you okay?’ and then as soon as he turned around we both just lost it.” 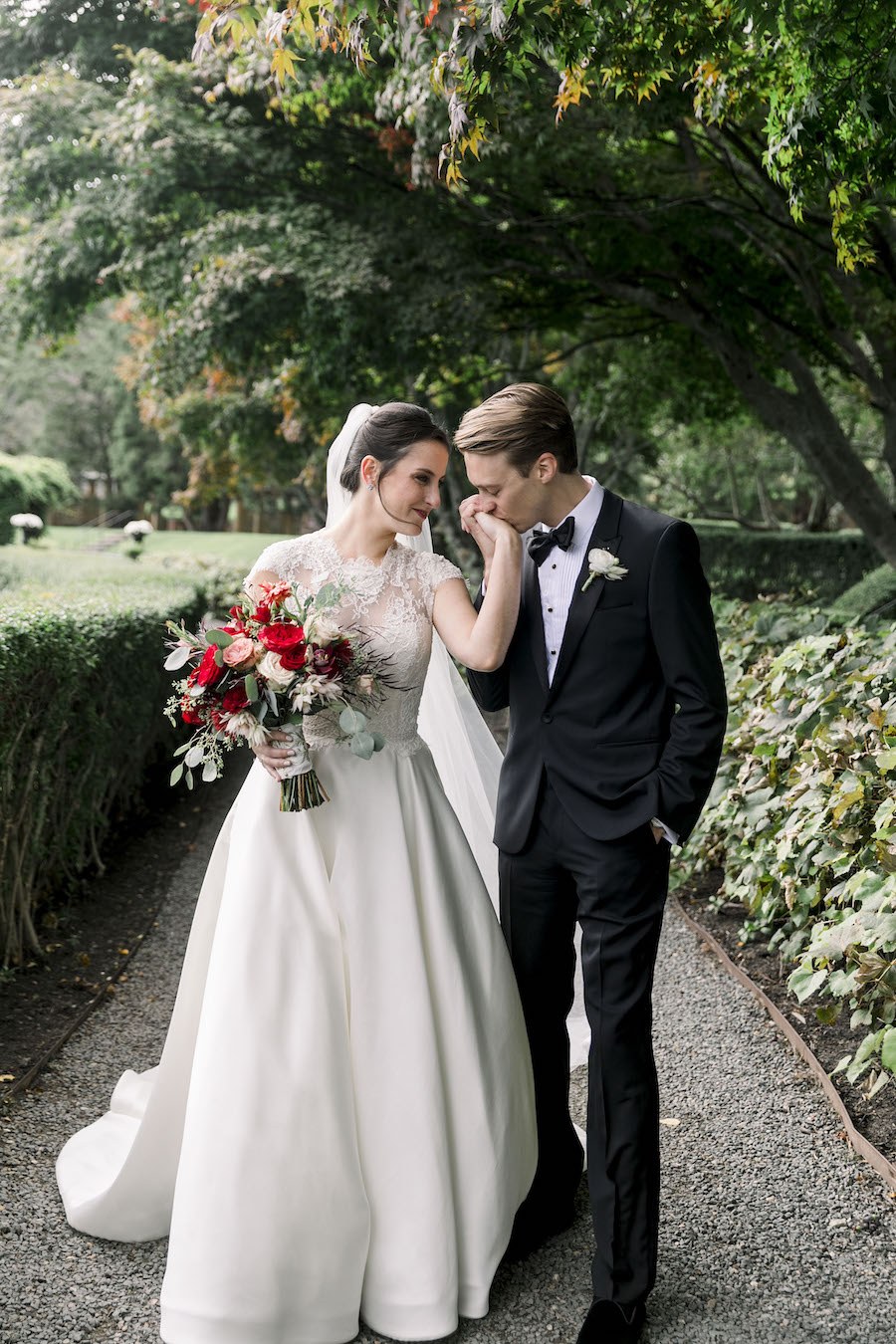 “I knew I wanted something super romantic that would make me feel like I was in a fairy tale,” the bride says of her Monique Lhuillier frock, which featured a lace bodice, a long train, and pockets. Shannon also customized the gown by adding cap sleeves. 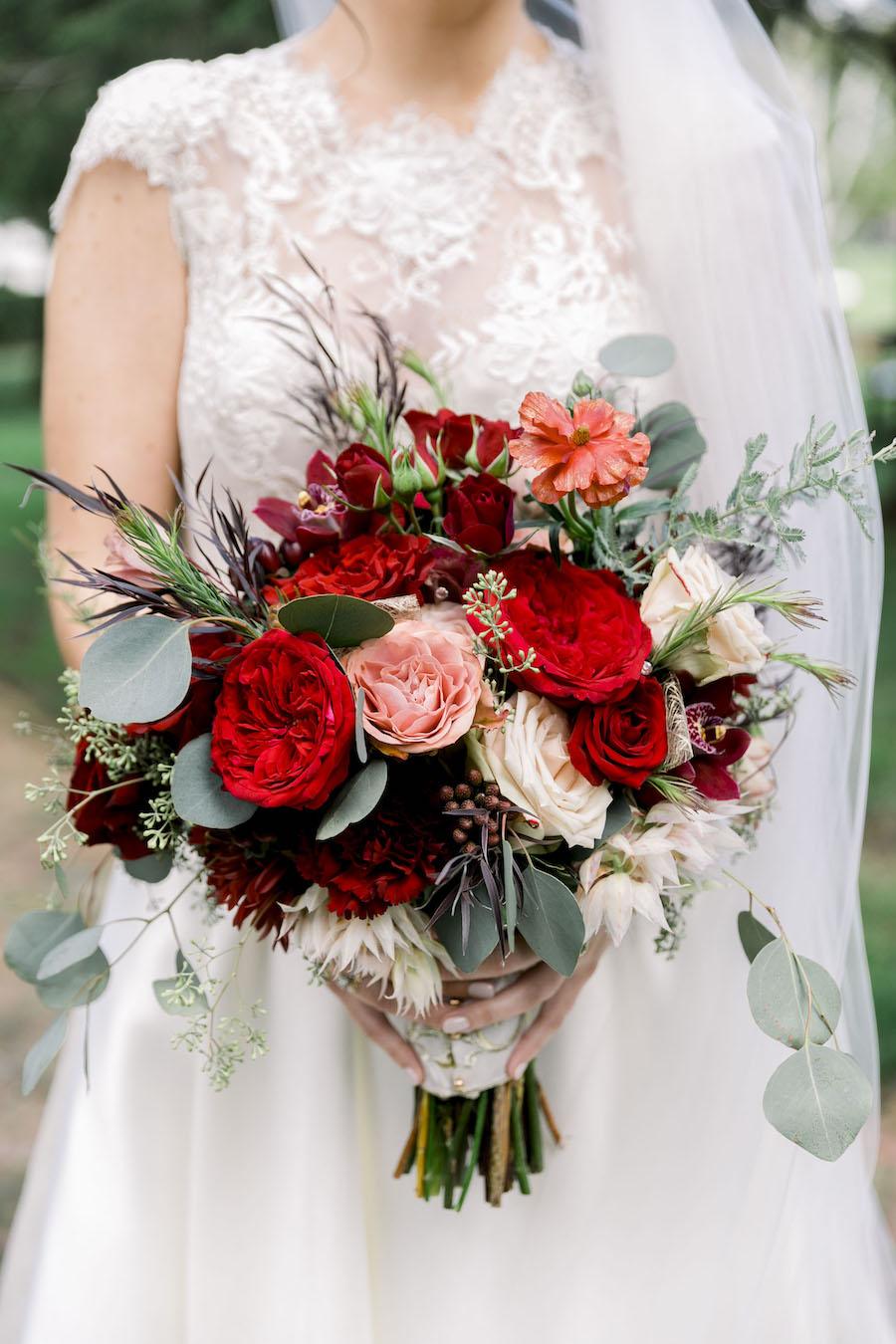 Tommy’s mom, Maureen, is a floral designer, so she took care of the couple’s wedding flowers. She filled Shannon’s bouquet with everything from roses to gold-painted eucalyptus to rosemary sprigs, which was a nod to the bride’s love of cooking. “She put so many personal touches in there,” the bride says. “It was so meaningful.” 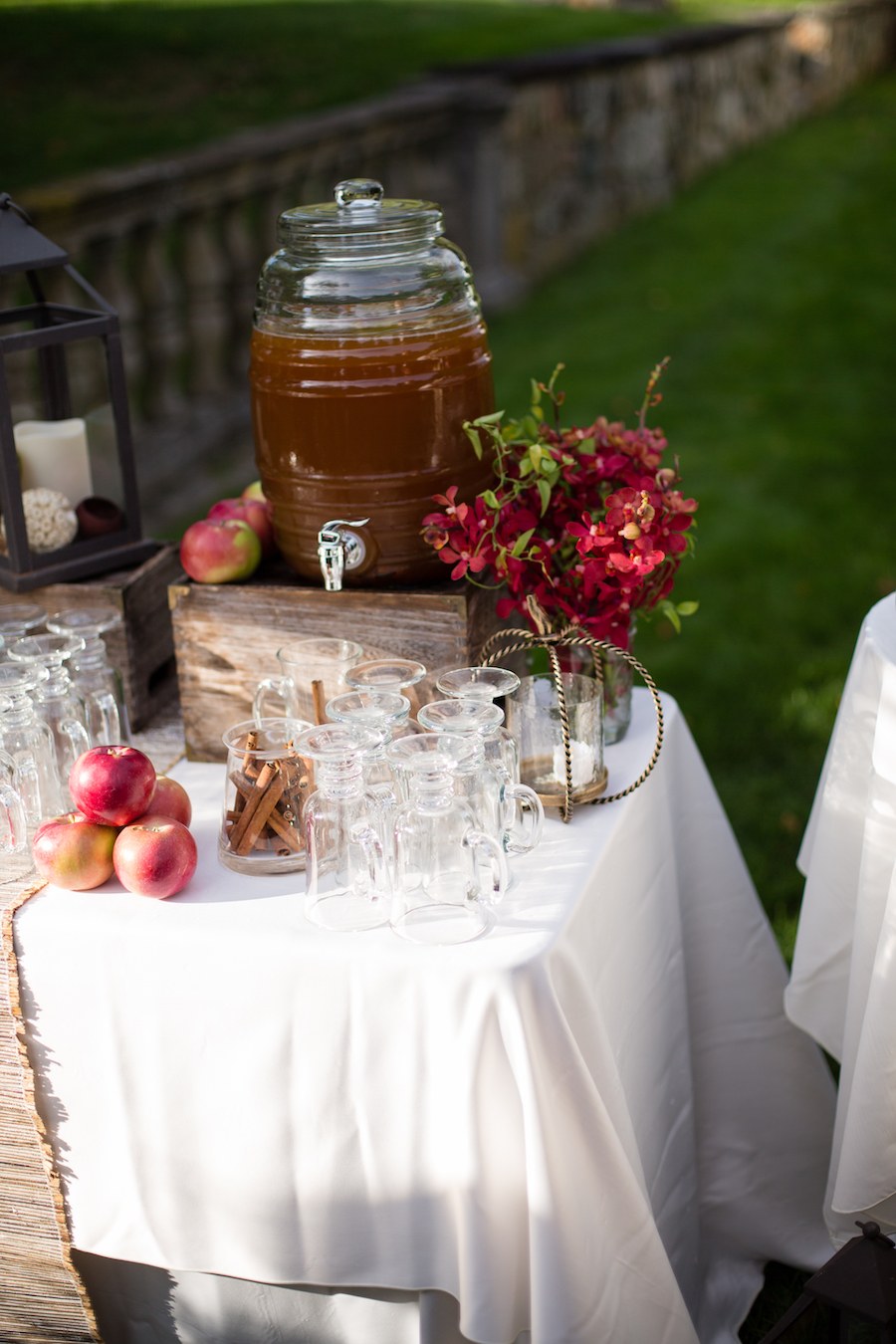 Before the ceremony, Tommy and Shannon welcomed guests with a hot and cold apple cider station. A string trio, meanwhile, played songs
that the couple says they took “hours picking,” including the themes from Harry Potter, Game of Thrones, and Downton Abbey. 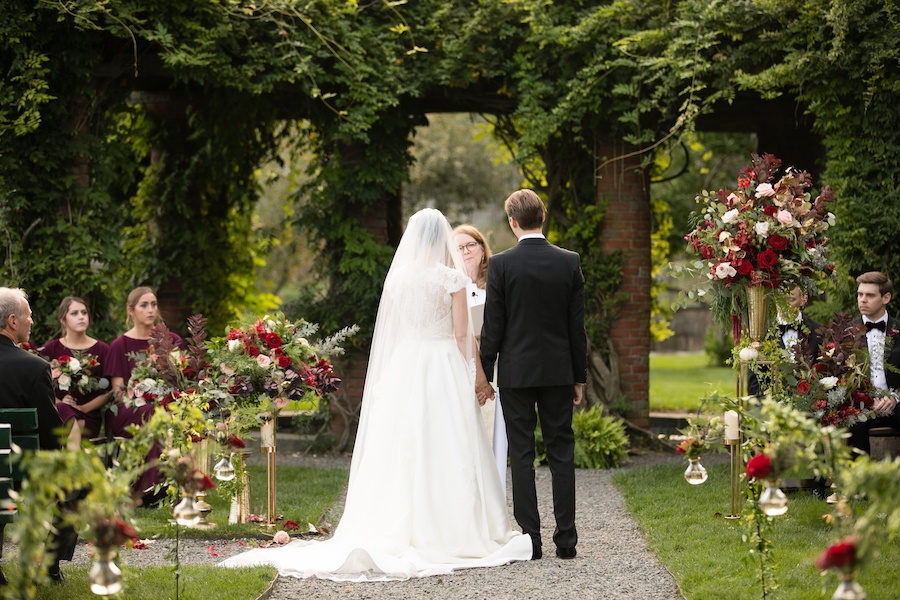 “In terms of décor, the ceremony space was naturally just so pretty,” the bride says. To complement their surroundings, the bride and groom lined their aisle with markers hanging petite vases of roses and greenery, and placed larger floral arrangements at the altar. 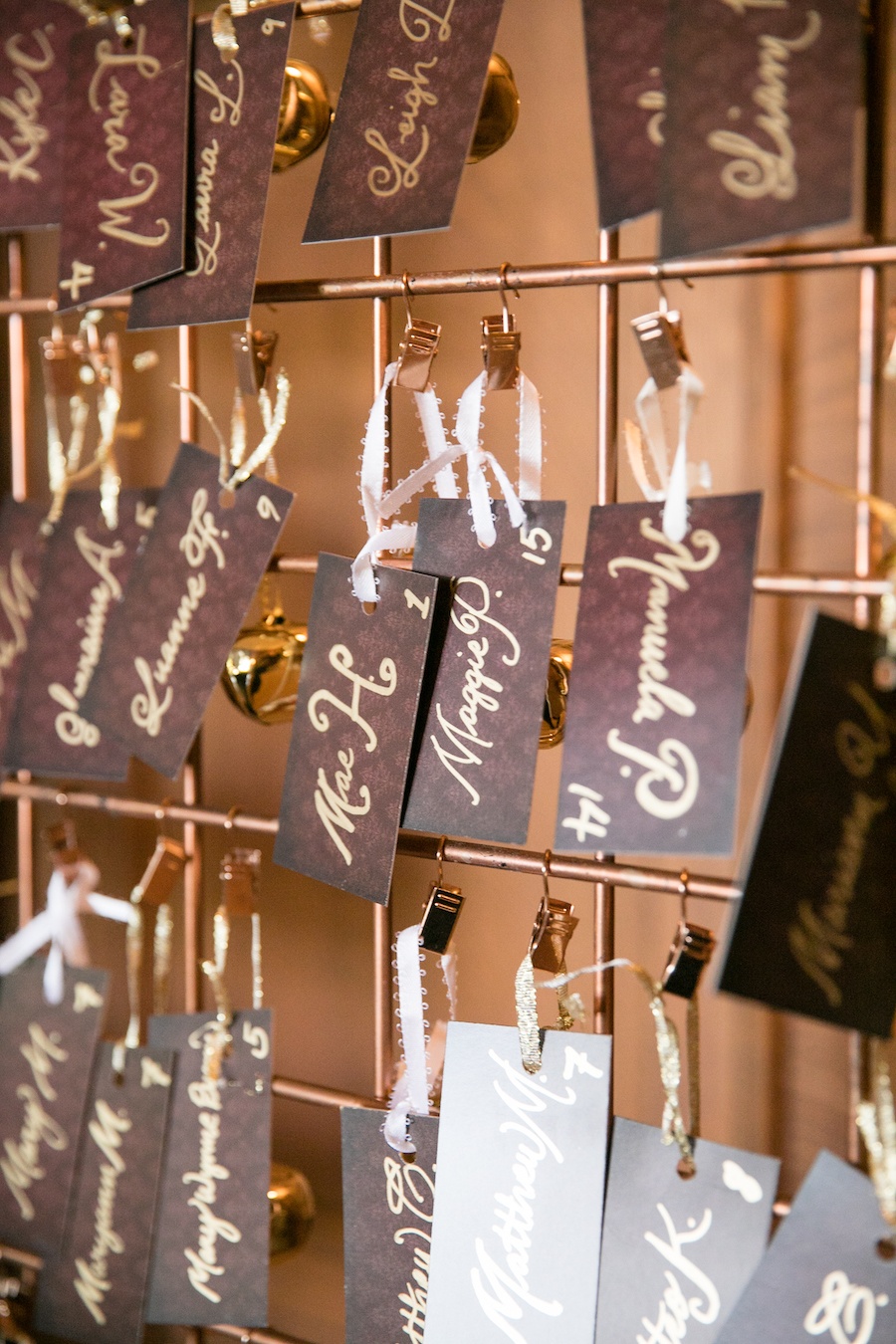 Since the couple’s last name is Christmas, they incorporated subtle nods to the holiday throughout the day. One of those was their escort cards, which Shannon made by hand and affixed with jingle bells. The back of the cards also featured a quote inspired by The Polar Express: “The bell still rings for all who truly believe.” 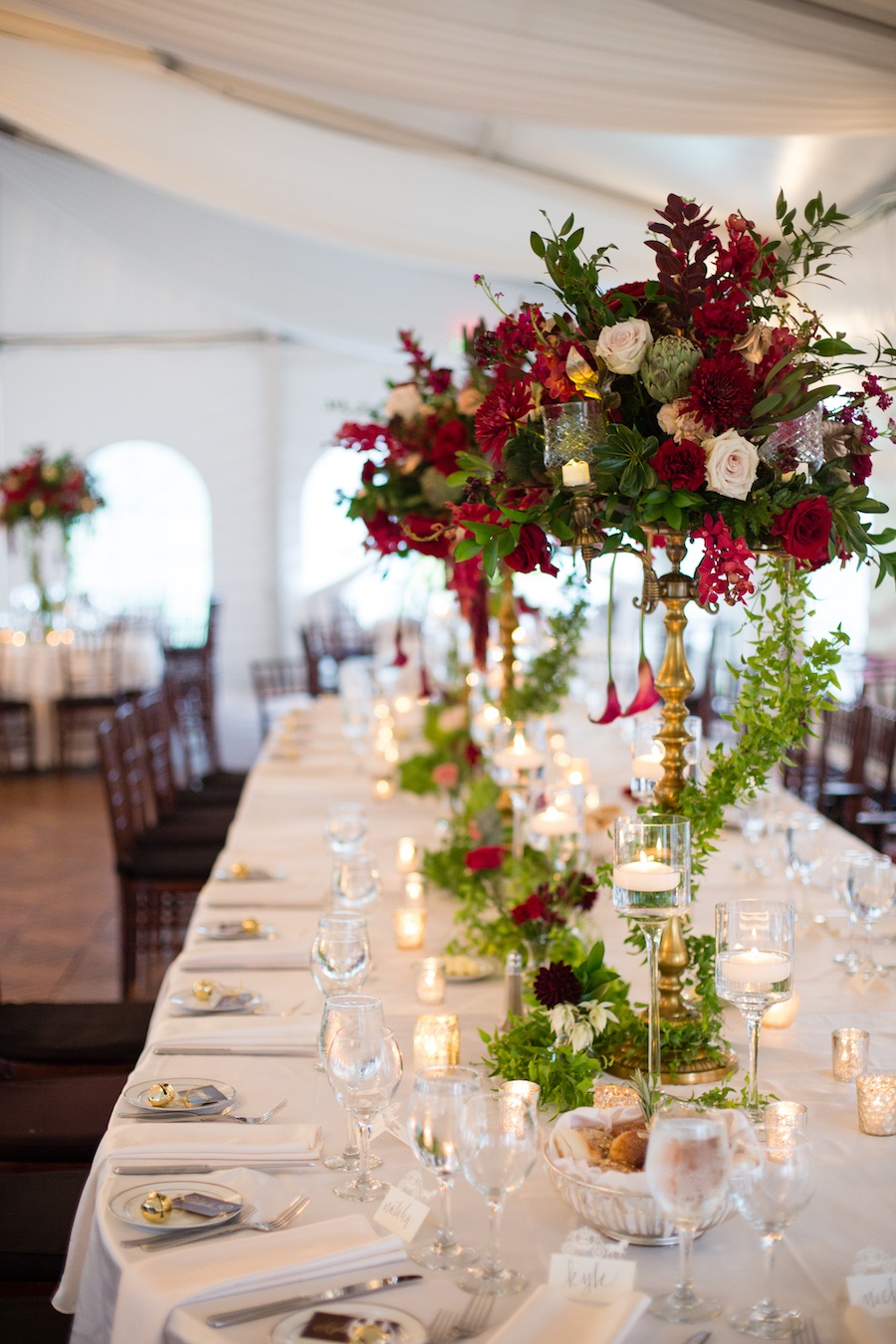 Perched atop tall gold candelabras, the couple’s floral centerpieces featured greenery that cascaded down to the table, where it mingled with tea lights and votives. 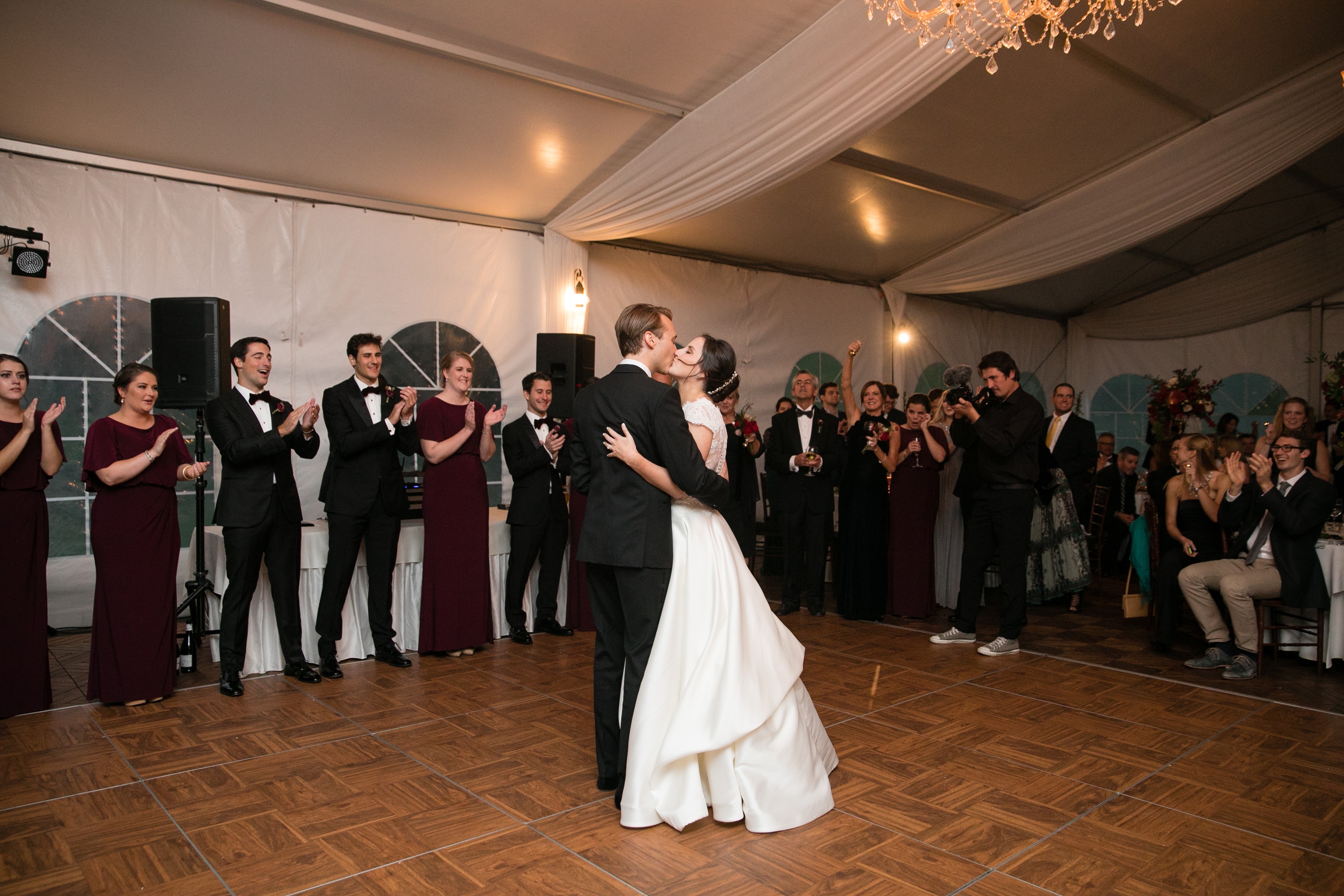 Shannon and Tommy had their first dance to Sam Smith’s acoustic version of “Latch.” “We’d spent time listening to a bunch of different songs to try to figure out what really spoke to us,” Tommy recalls. “Within five seconds of that song starting, we were like, ‘Yes.'” 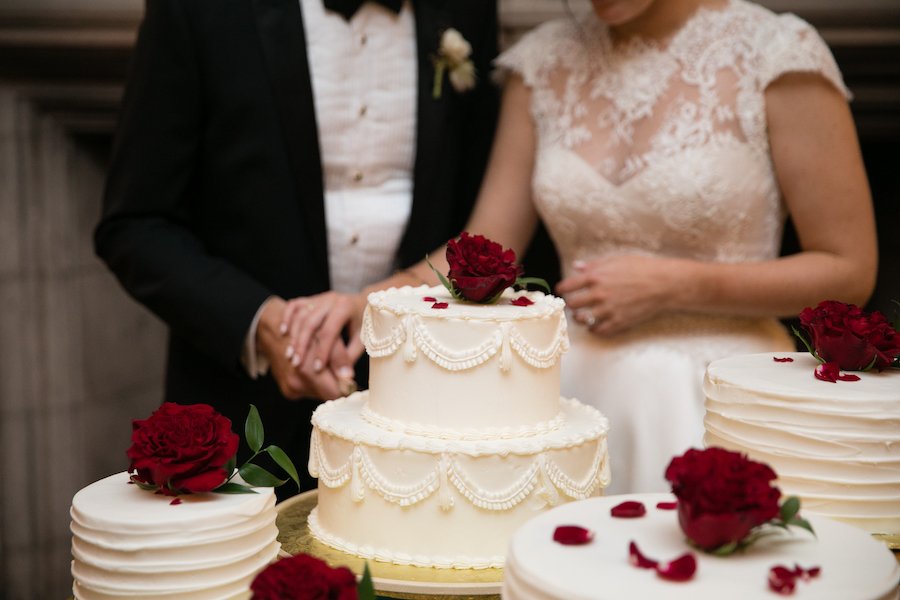 Since they aren’t “huge cake people,” Tommy says, the bride and groom almost didn’t have a wedding cake. At Shannon’s bridal shower, however, someone brought confections from the Icing on the Cake in Newton and the couple changed their tune. “They were so good we were like, ‘We have to have these at our wedding,'” the groom adds. At their tasting, they struggled to choose a single flavor, so they opted to do a cake table featuring five different cakes.