You need to see the floral collar worn by the couple's super-cute pup. 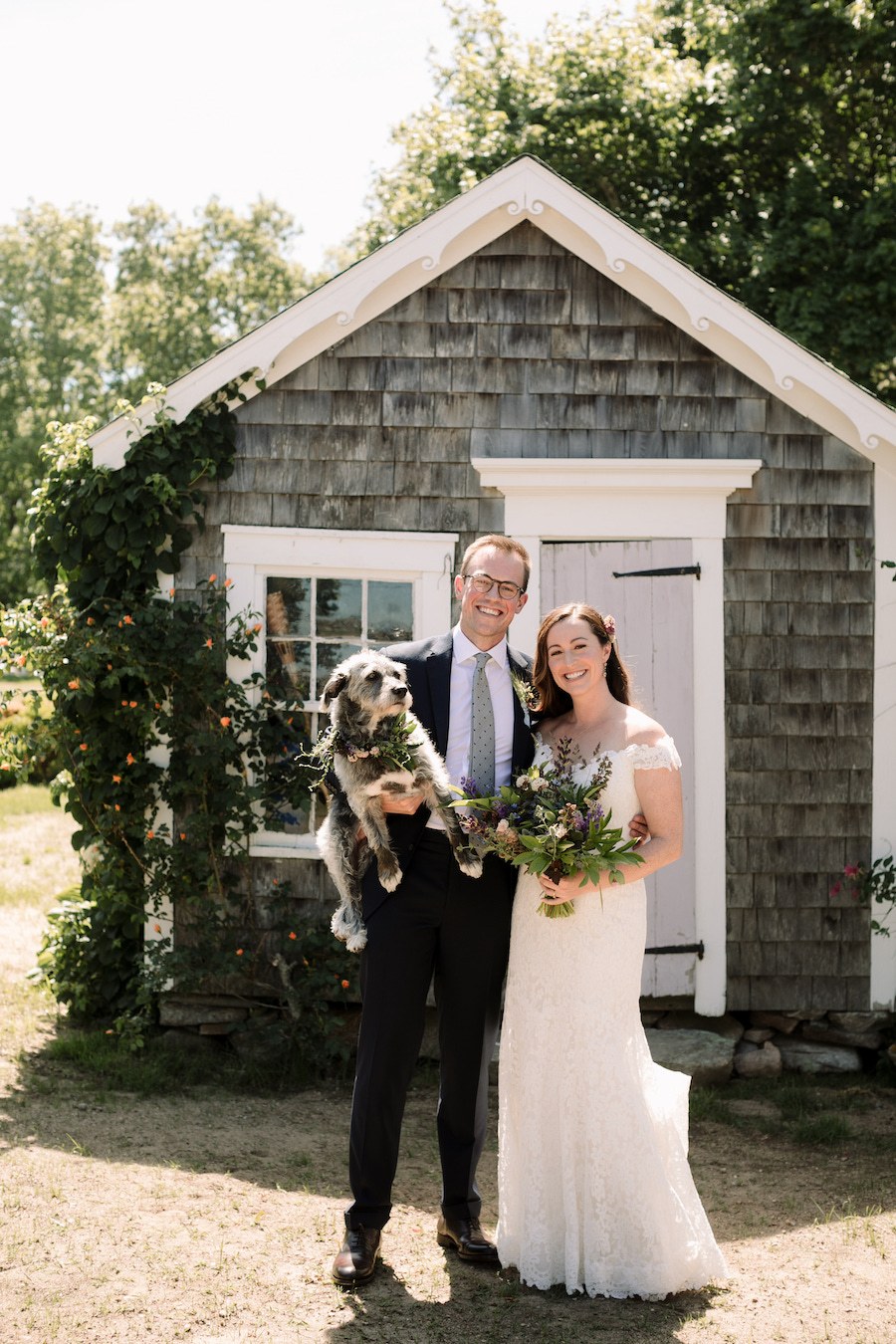 Lucy Keating describes her first interaction with Toby McDougal as merely “a blip” on her radar. They first encountered each other in 2007, when Lucy was visiting a mutual friend at Harvard, where Toby also went to school. “I met him very briefly one night, and he definitely stuck out, but we were in very different life phases at the time,” she says. They connected on Facebook though, and stayed abreast of each others whereabouts. Years later, Lucy was living in California when their friend called and suggested she go on a date with Toby. Not long after, another mutual friend suggested the same thing. “I said I would message him on Facebook, but I never did,” she recalls. “We didn’t really know each other, so it felt like a really direct move.” Plus, Toby was still on the east coast. But about a decade after they’d first met, Lucy was headed back to her parents’ house in Boston for Thanksgiving and decided to reach out. “I thought to myself, ‘What do I have to lose?’” she says. They met in the South End at the Beehive the day after the holiday. The two talked for hours, went out again the next day, and then had a third date at the Museum of Fine Arts the day after that. Before Lucy flew back to the west coast, they decided they’d give long distance a go. “I was like, ‘I don’t know how I’m supposed to go back to dating people when I’ve already met someone I really like,’” she recalls.

Nearly a year and a half later, Toby and Lucy, who had moved to Boston about seven months prior, were back at the MFA. While they were eating lunch, Lucy mentioned she’d just learned that the museum is also a wedding venue. “Toby looked at me with the weirdest expression on his face and he was like, ‘Who said anything about that?'” Lucy recalls. “In my head I was like, ‘Oh my god.’ We’d been talking about marriage a lot, but then I thought maybe I’d  jumped the gun a little bit.” Little did she realize that Toby actually had an engagement ring in his pocket. Just before they left the museum, Toby said he wanted to go check out the courtyard garden. “I thought that was kind of weird,” she says. But a docent told them it was closed. Then, as Lucy readied to leave again, Toby suggested they stop at the Japanese Garden, located outside of the museum. When they got there, that was locked too. “[Toby] had been very chill all day, but at this point he looked a little out of sorts,” Lucy says. Then Toby just started talking. “He was like, ‘Okay well…’ and then started saying all this stuff,” she recalls. “And I was like, ‘I think he’s proposing to me?'” Toby finally got down on one knee, and Lucy said, “Yes.” “It was the most meaningful thing. I wouldn’t have wanted an over-the-top proposal,” she says.

For the couple’s wedding day, choosing a venue was a no-brainer. Lucy had always wanted to get married in South Dartmouth, a small coastal village where her parents had owned a house for several decades. “It’s always been really special to us, and its’s where we’ve made our best memories,” the bride explains. Salters Point, a private oceanfront community located near her parents’ house, proved to be the perfect setting. As for the vibe for the day? “We kind of just wanted it to feel like a really lovely party, not with all of the extra things,” Lucy says. “And we really wanted to reflect the vibe [of the area].” They kept their décor simple and natural with arrangements that looked like they’d been freshly plucked from a New England garden. Their vision came together just as they’d imagined it. “At the beginning of the day, I was so scared for it to be over,” the bride says. “I was like, ‘The letdown of this is going to be gigantic,’ but as the night was coming to a close I remember thinking, ‘I don’t think I’m going to be sad because this was genuinely so exciting and fulfilling.'” 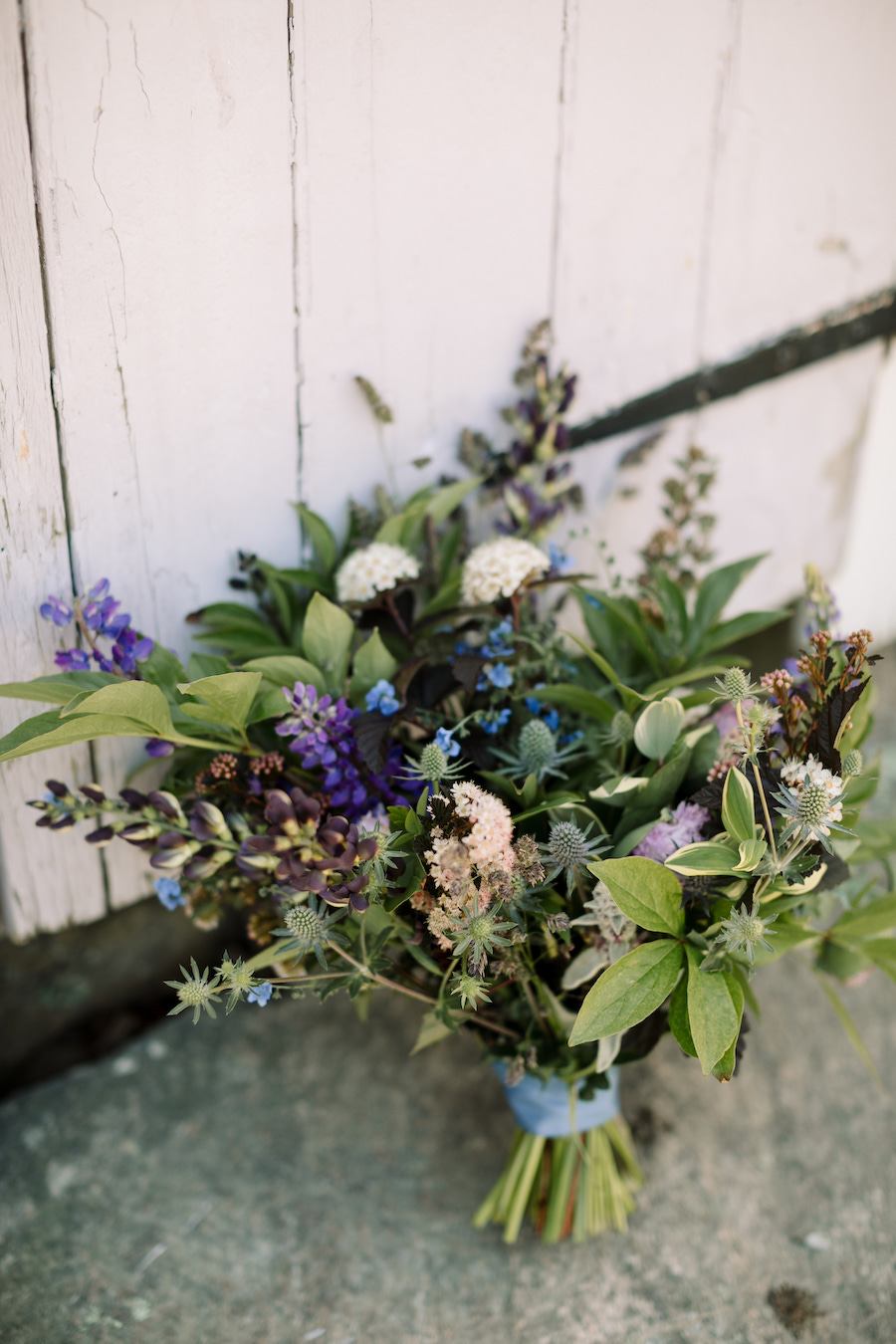 Lucy says she wanted her bouquet to feel whimsical and garden-inspired, so Phoebe Poole, the flower manager at Weatherlow Farms in Westport, created an arrangement filled with wild lupine, ‘dutch chocolate’ baptisia, flowering ninebark, and other blooms. 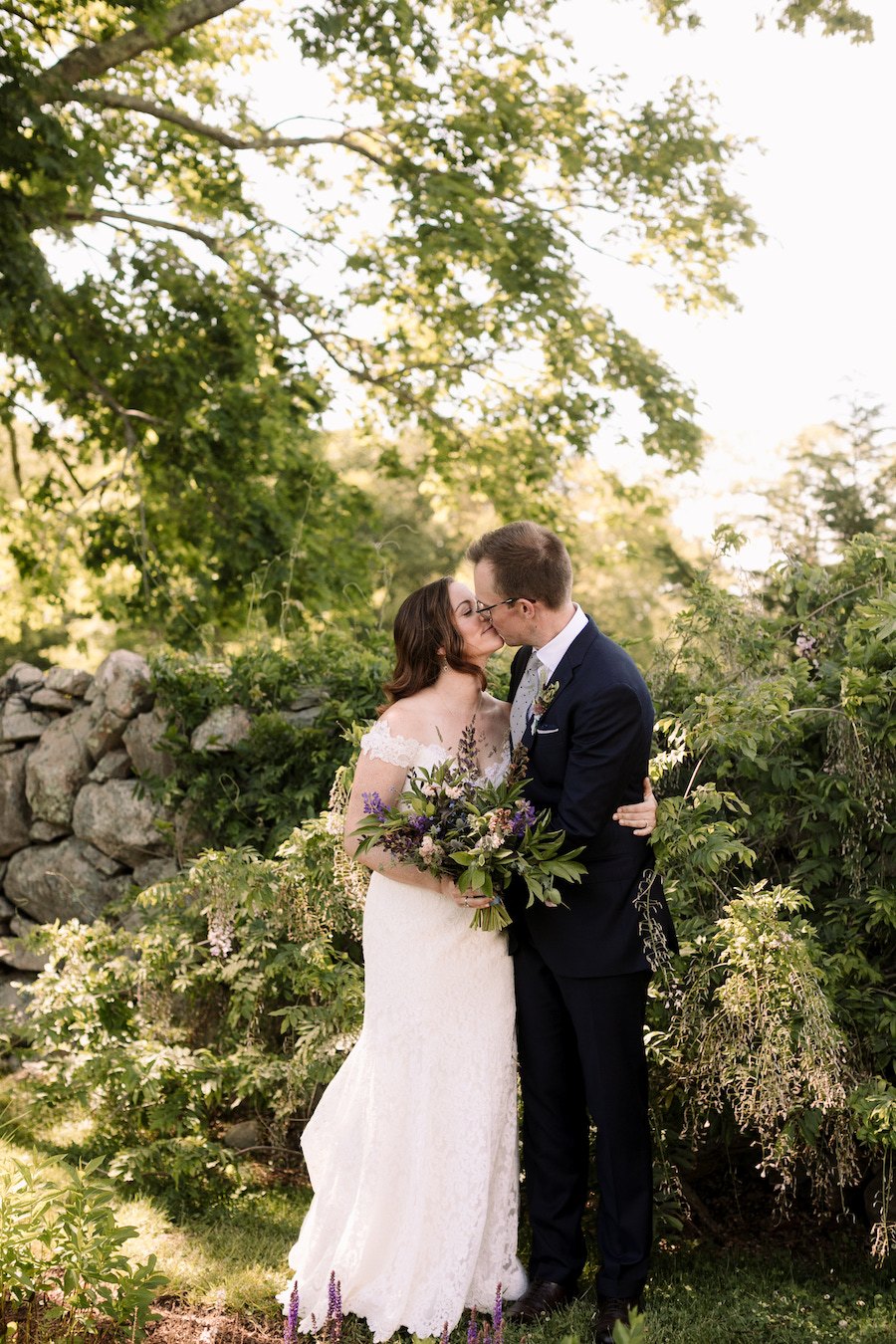 When shopping for a wedding gown, the bride knew she wanted a fitted, off-the-shoulder frock with a classic vibe⁠—”something that
was low-key but also had an elegance,” she explains. She found what she was looking for in a Romona Keveza dress from Christina’s Bridal, in Andover. 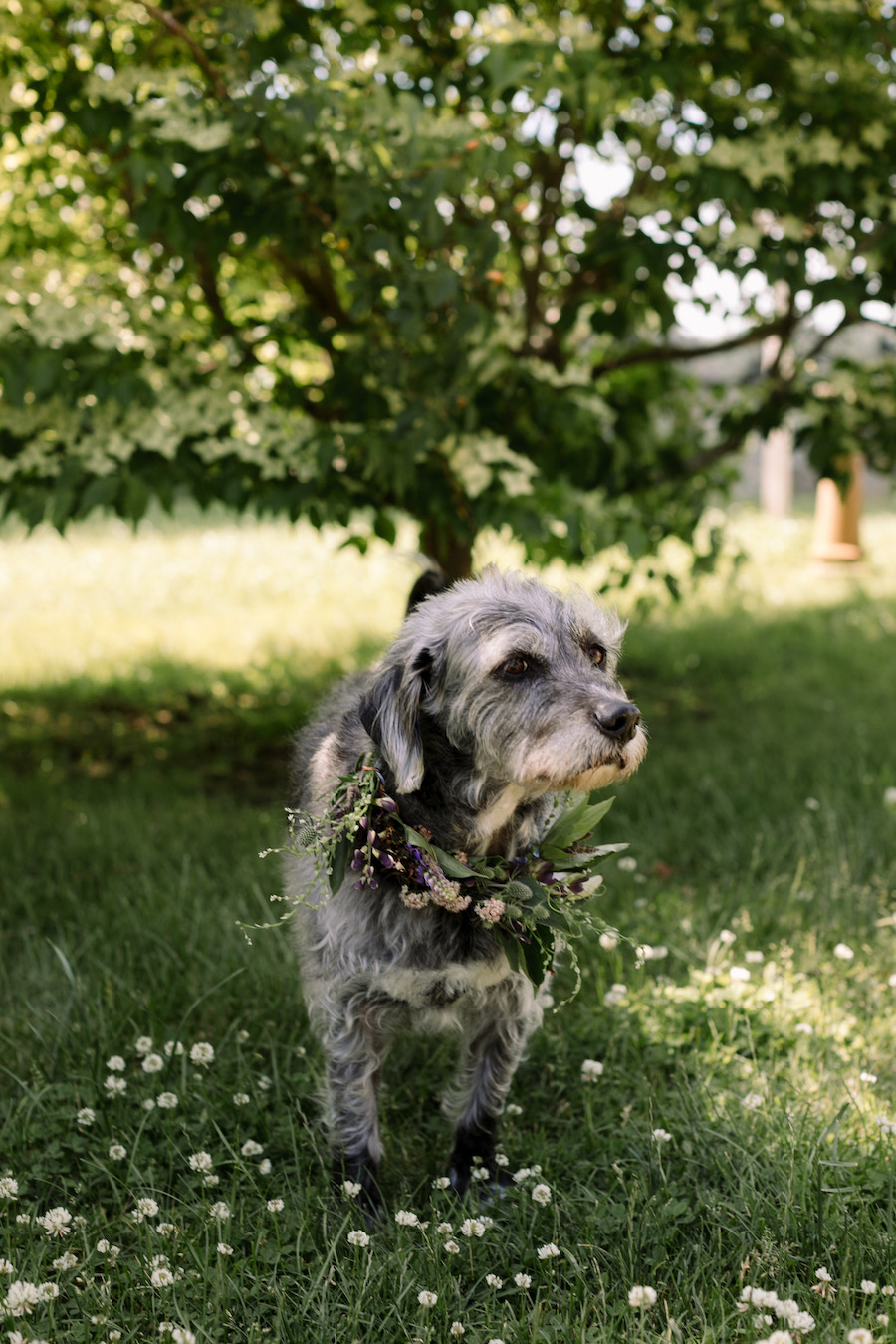 The couple’s dog, Ernie, took part in the bride and groom’s wedding day portrait session. The pup’s floral collar featured the same flowers Poole incorporated into the bride’s bouquet. “It was so beautiful,” Lucy says. 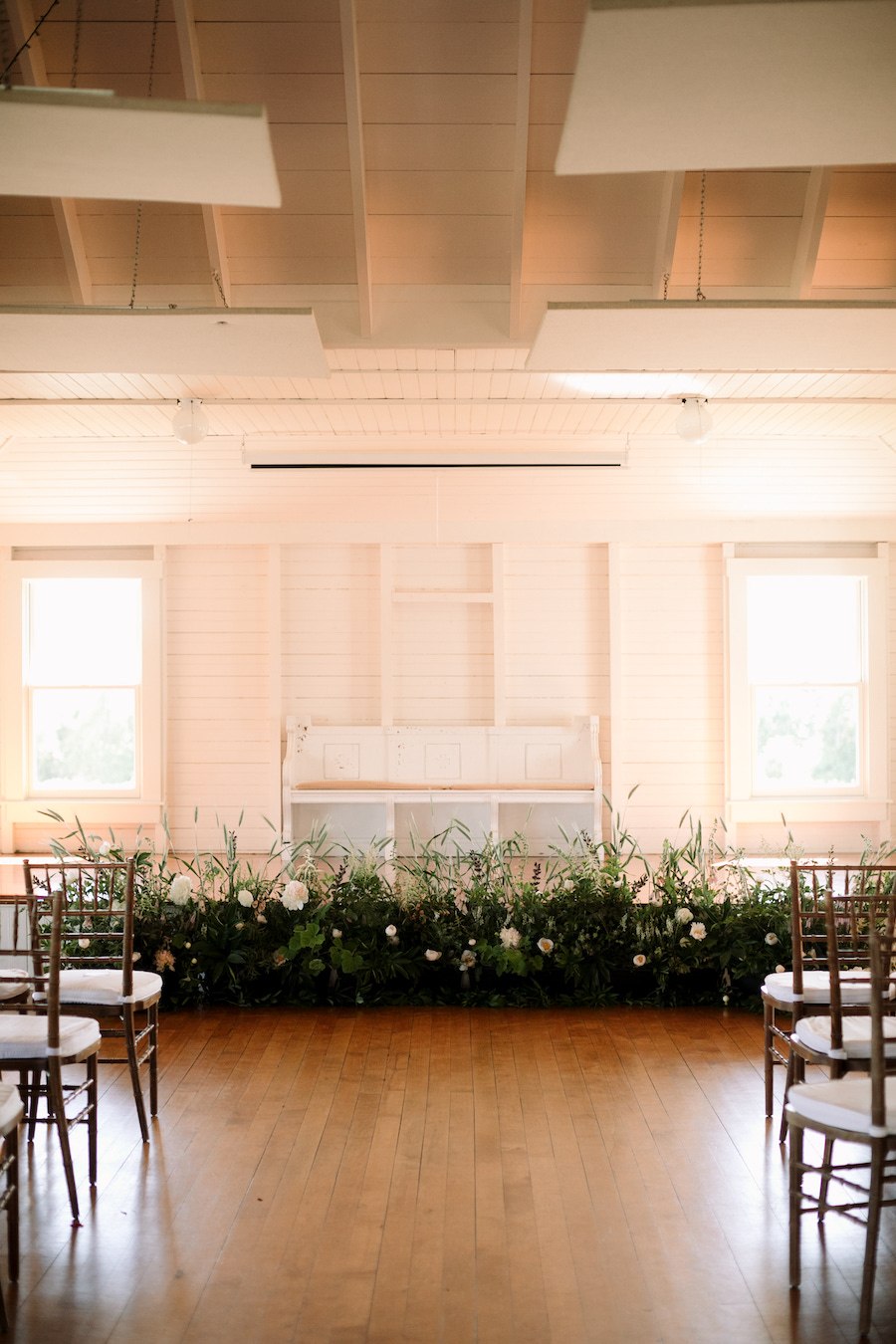 Lucy and Toby’s ceremony took place inside the community building on the property, where Poole lined the foot of the stage with tall greenery, grasses, and flowers. 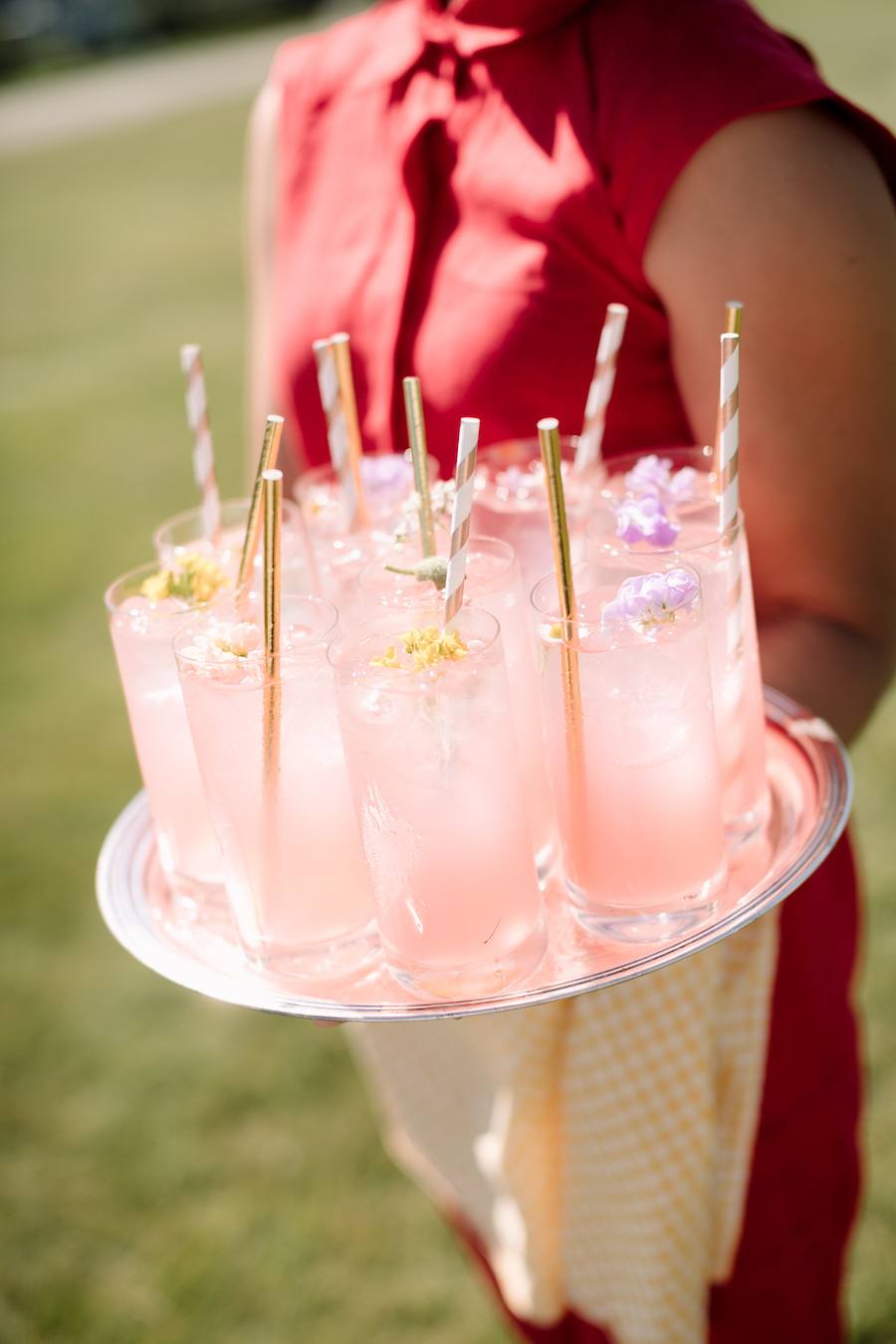 The couple served two signature cocktails: The Rita, a take on a margarita topped with edible blossoms, and the Dandy, a twist on a Manhattan. 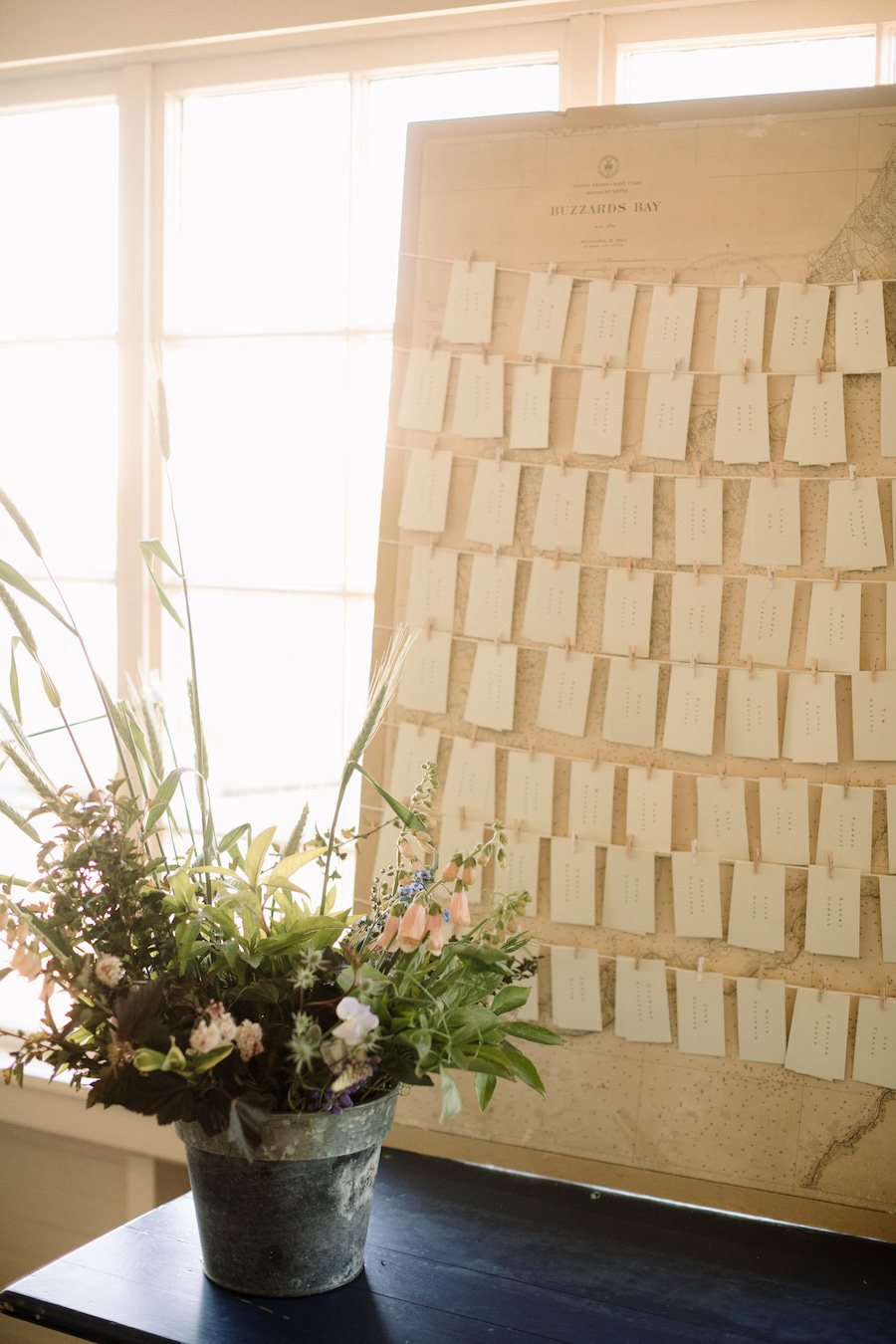 The bride and groom clothes-pinned their escort cards to string hung across an old map that Lucy’s mom found in her garage. “A lot of the houses down here are shingled summer cottages that nobody has touched in 100 years and I wanted to have that old-school, salt-air kind of vibe,” the bride explains. 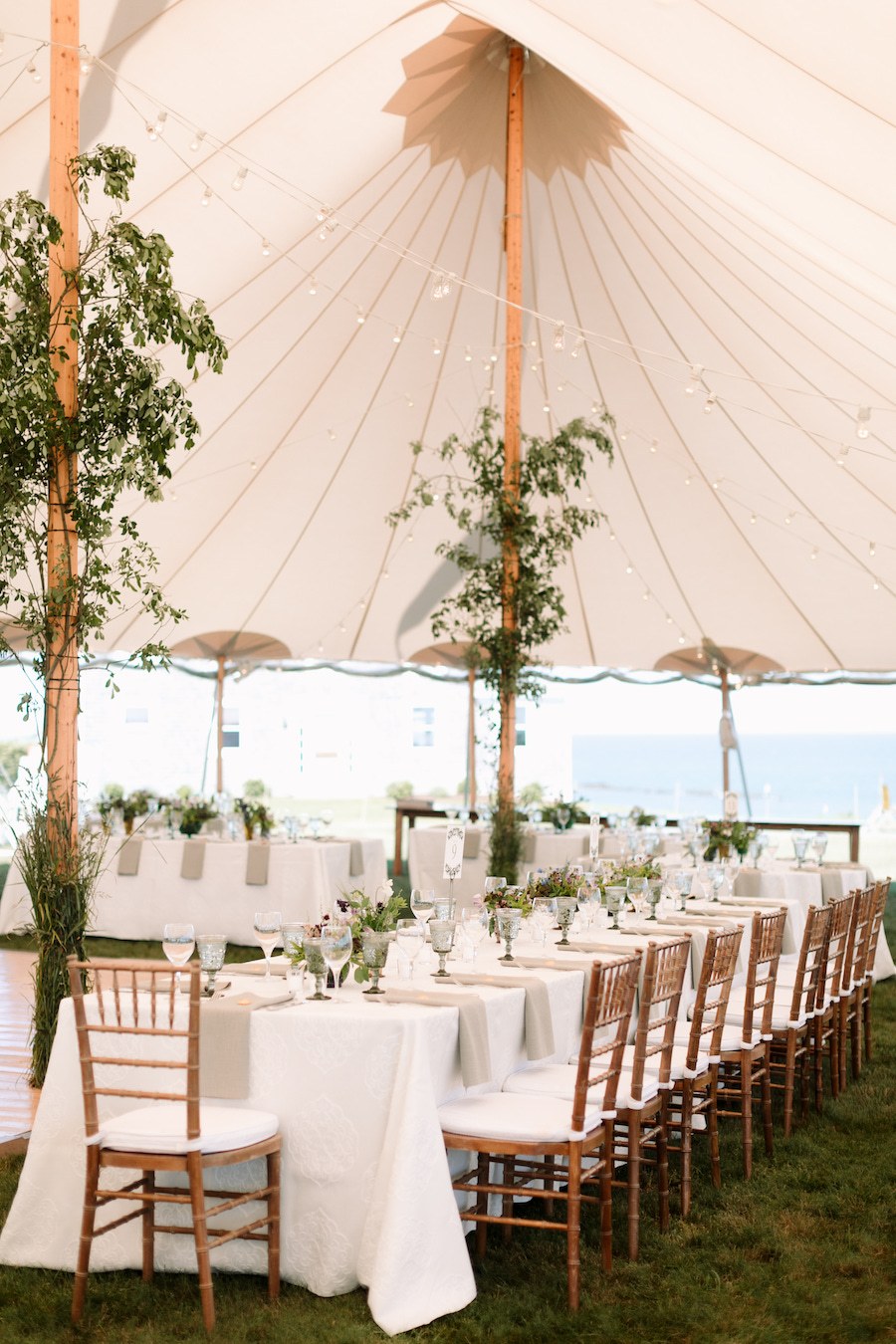 The couple’s reception tent featured long tables topped with embroidered white linens and cream-colored napkins, as well as abundant flora. “There wasn’t a lot to it,” Lucy says. “We really just let flowers and greenery take over.” 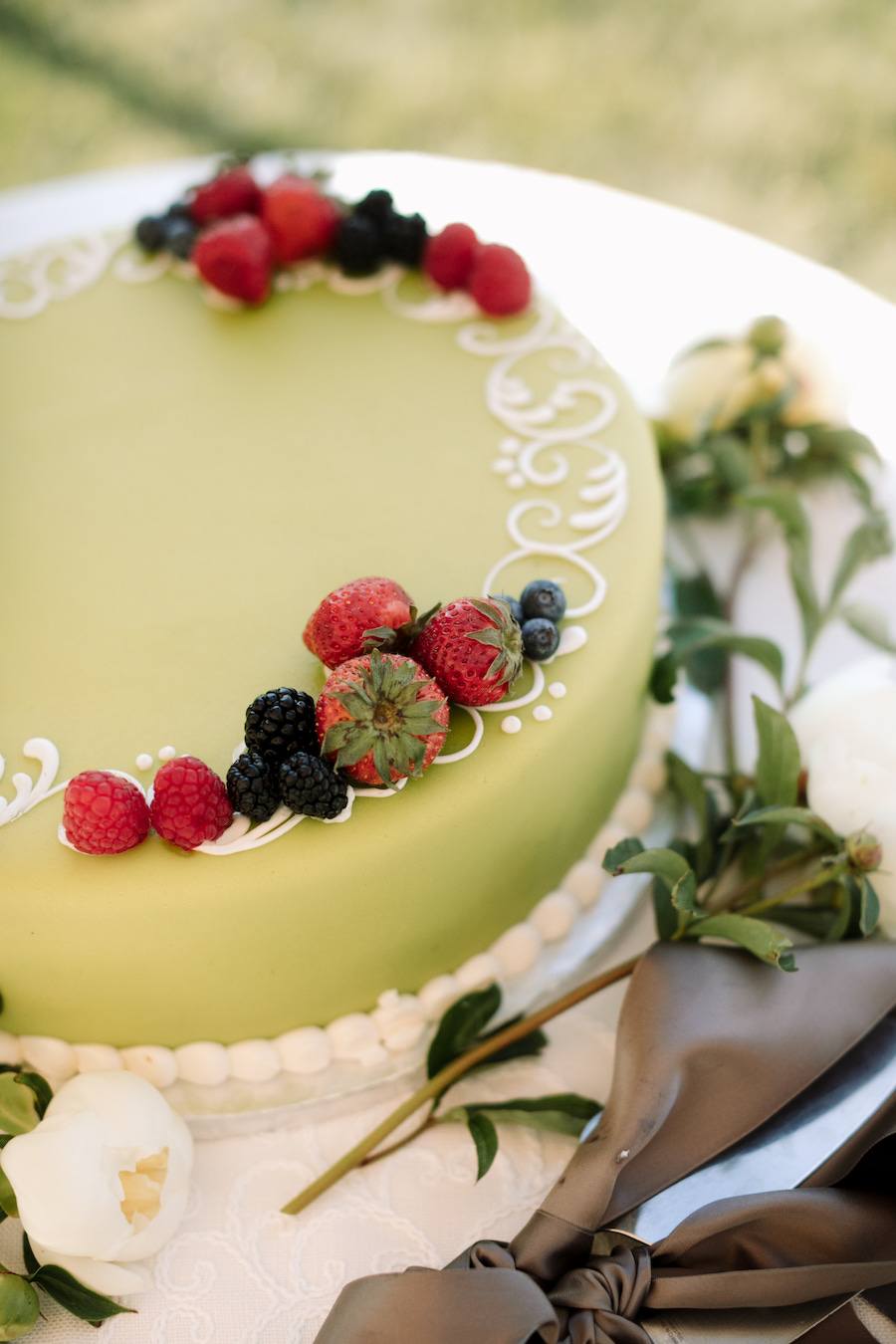 The couple served a Bløtkake, a treat that Toby’s mom, who is from Norway, makes for his birthday every year. “It’s a delicious summer dessert, and we also wanted to have that element of Toby’s heritage to be part of the day,” Lucy says. 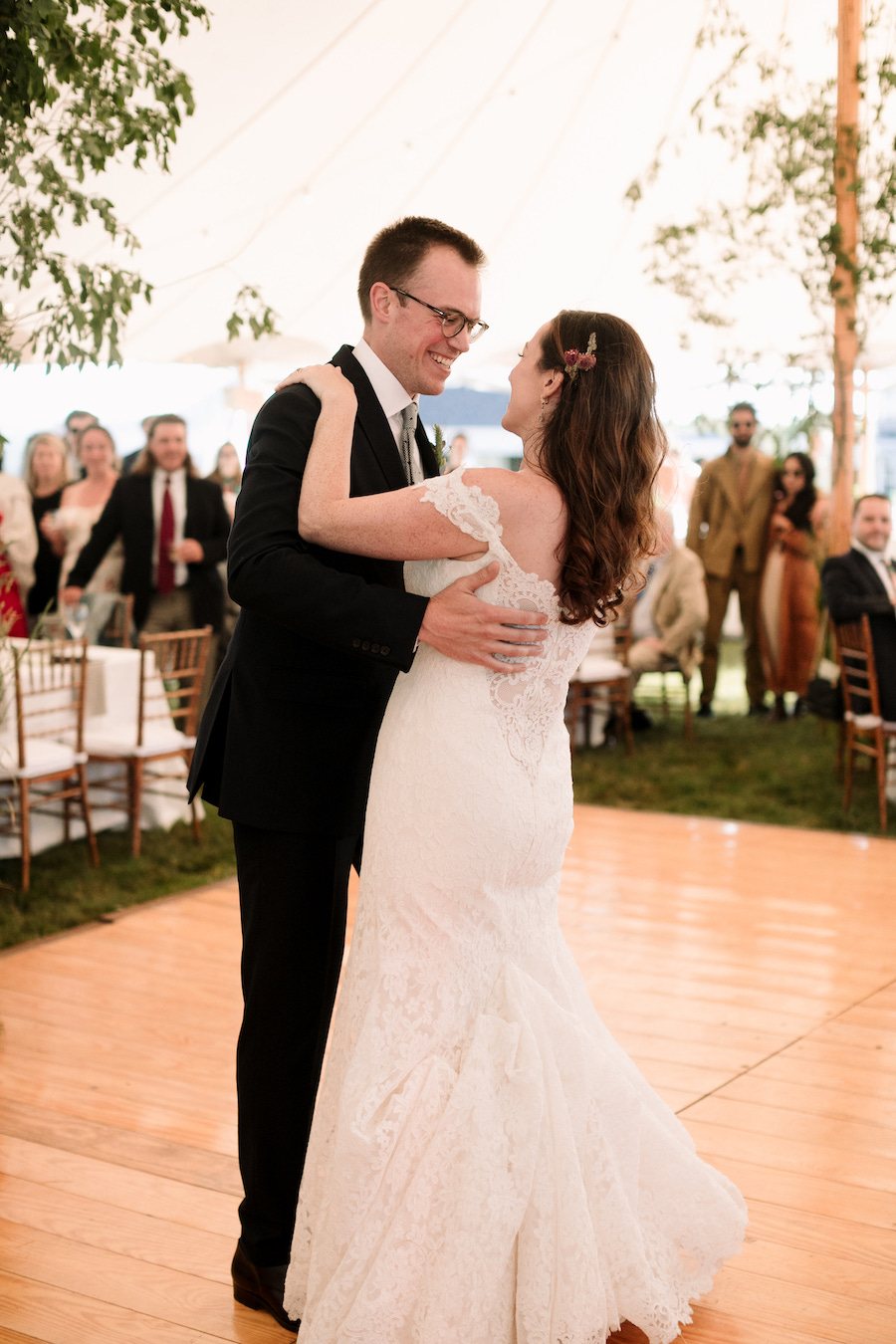 The couple had their first dance to “Shining Star,” by the Manhattans. “The Jerry Garcia Band had a cover of the song that we used to always listen to in the car,” Lucy says. “We took three dance lessons before our wedding, and then we forgot everything we’d learned. The photos make it look a lot sleeker than it was.”