The couple's ceremony was officiated by the friend who set them up. 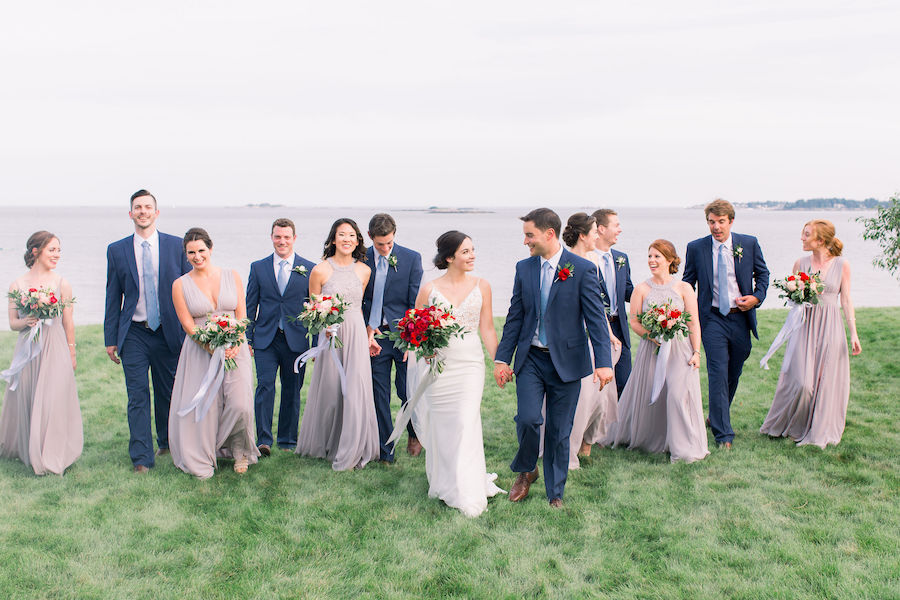 Ali Bougas and Steve Swigut met in May 2015 when their mutual friend Ari set them up. “We were both looking to meet someone, so we both asked him,” Ali recalls. The trio planned to meet for brunch at Johnny D’s in Davis Square, where Ali assumed they’d be joined by a group of friends. It turned out it was just the three of them. Although Ali was nervous, she and Steve hit it off. “We had a great time,” Ali says. “After brunch, Ari was joking around and asked me when I was ready to meet bachelor number two. I told him he had done a great job and there was no need for me to meet anyone else.”

The couple started dating that summer. A year later Ali moved into Steve’s condo in South Boston, and they eventually adopted a puppy named Loki. By 2018, getting engaged felt like the natural next step—especially since the two had known since the beginning that they’d someday walk down the aisle together. “We’d started talking about our future just a few months after we met,” Ali explains. “We just knew right away we were going to be together forever.”  So when Steve proposed to Ali while the pair was out on a boat at his parents’ lake house, it wasn’t exactly a shock, but she thrilled nonetheless. “I was just so excited,” she says. Afterward, they enjoyed champagne and FaceTimed friends and family.

Ali and Steve knew from the start that they wanted a relaxed backyard wedding in Beverly, the bride’s hometown, and luckily, close family friends offered up their waterfront home as a venue before the pair even got engaged. “They were really rooting for us from day one,” the bride says. Then, when it came to their décor, Ali says the theme was “understated elegance with a pop of red”—a vision that came together with abundant roses and poppies, greenery, and hints of blue that complemented the seaside setting. The night of their celebration, the dance floor was packed as soon as the band started playing. Even some neighbors got in on the fun: “I found out later that people in the neighborhood listened to our vows and were dancing along to the music in their own yards,” Ali says with a laugh. 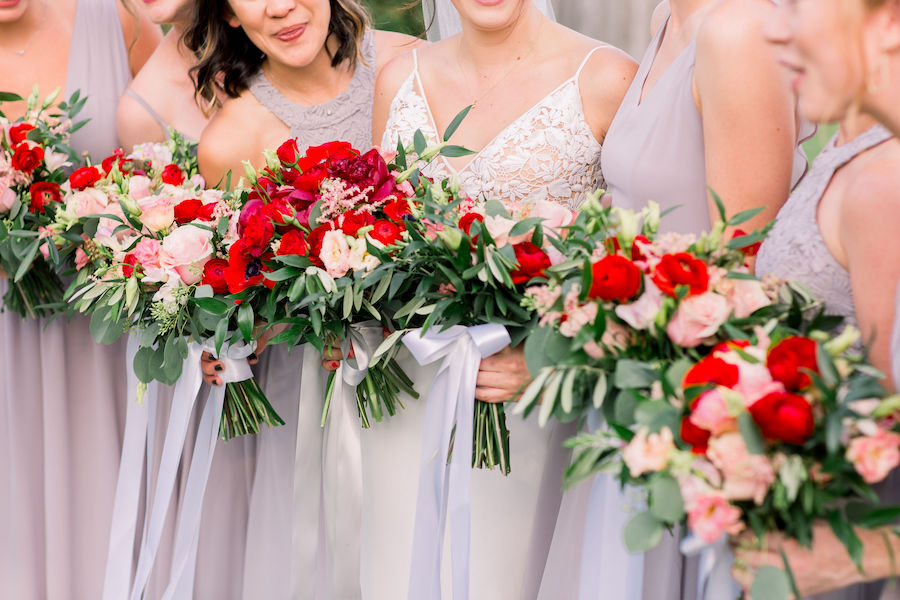 Ali searched for bouquet inspiration on Pinterest, and set her heart on soft, loose, and romantic arrangements wrapped in long ribbons for her and her bridesmaids. “I loved the the look of the ribbons in the wind and how they flowed,” she explains. 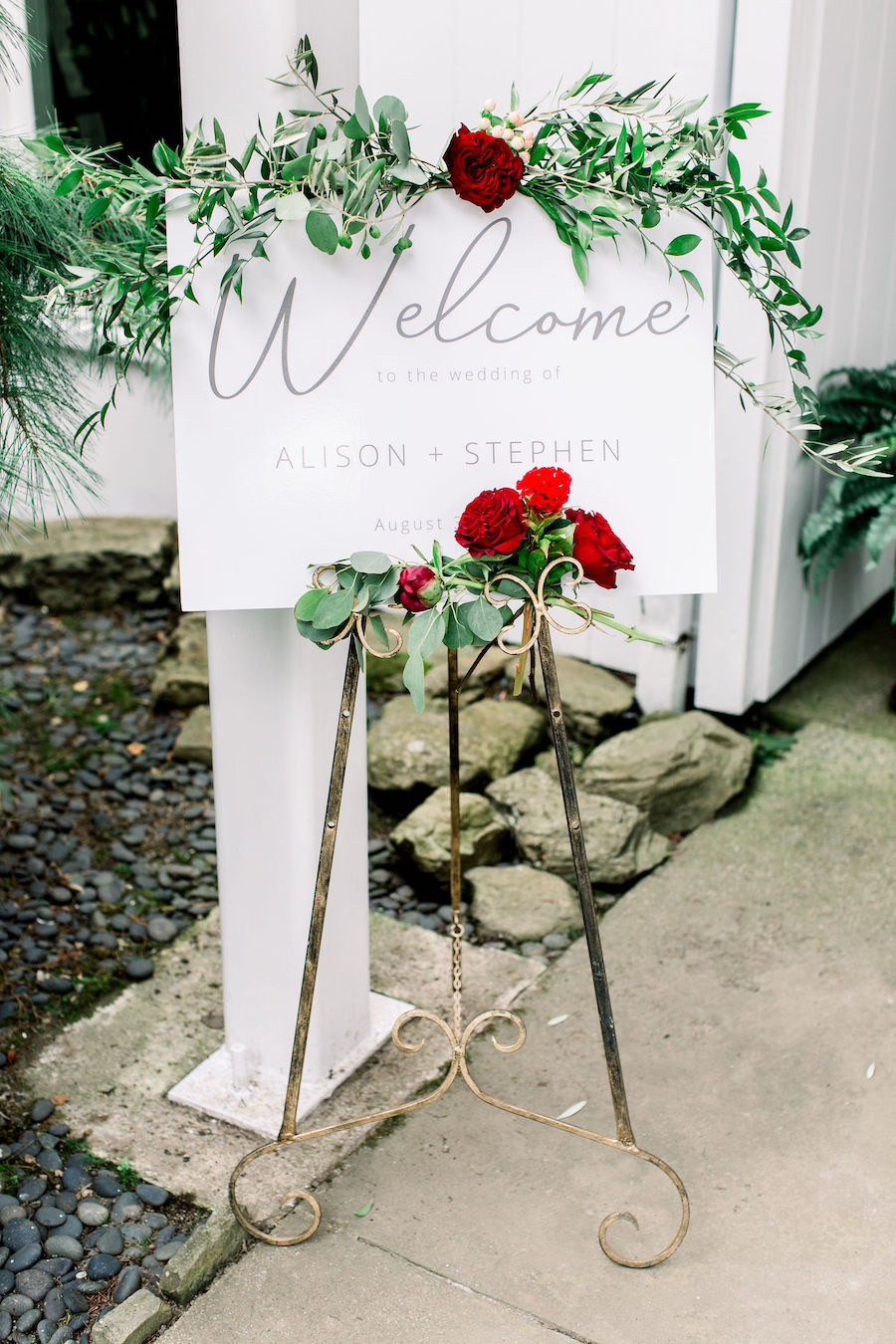 The bride and groom chose a summer wedding date because the bride is a teacher, and the two planned to honeymoon in Greece a few days after the wedding. 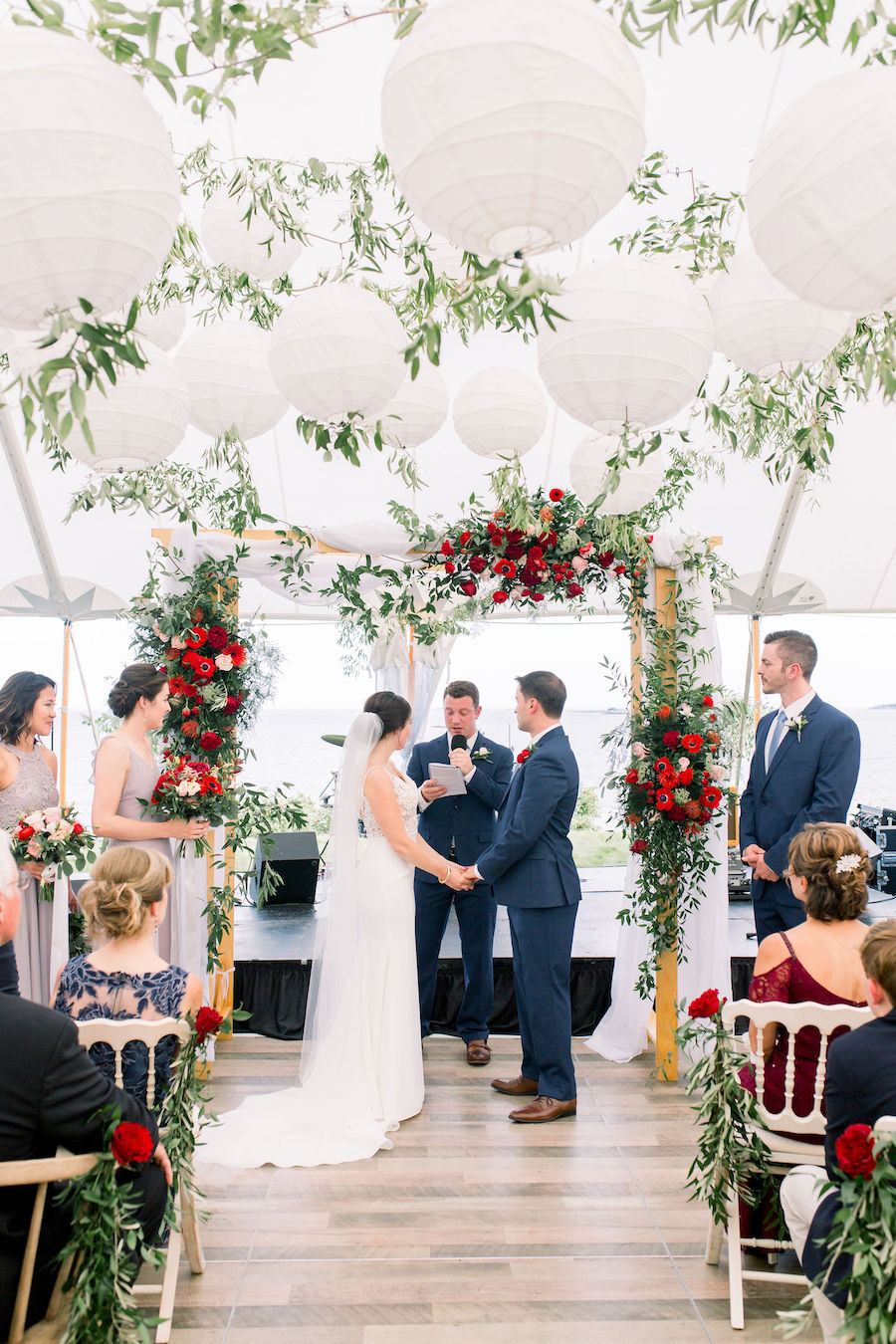 Ali and Steve’s friend Ari officiated their backyard ceremony, which the couple decided to move from outside to inside the tent at the last minute to take cover from potential rain. “At first I was disappointed, but it ended up being so perfect,” Ali says. “It felt really intimate and special.” 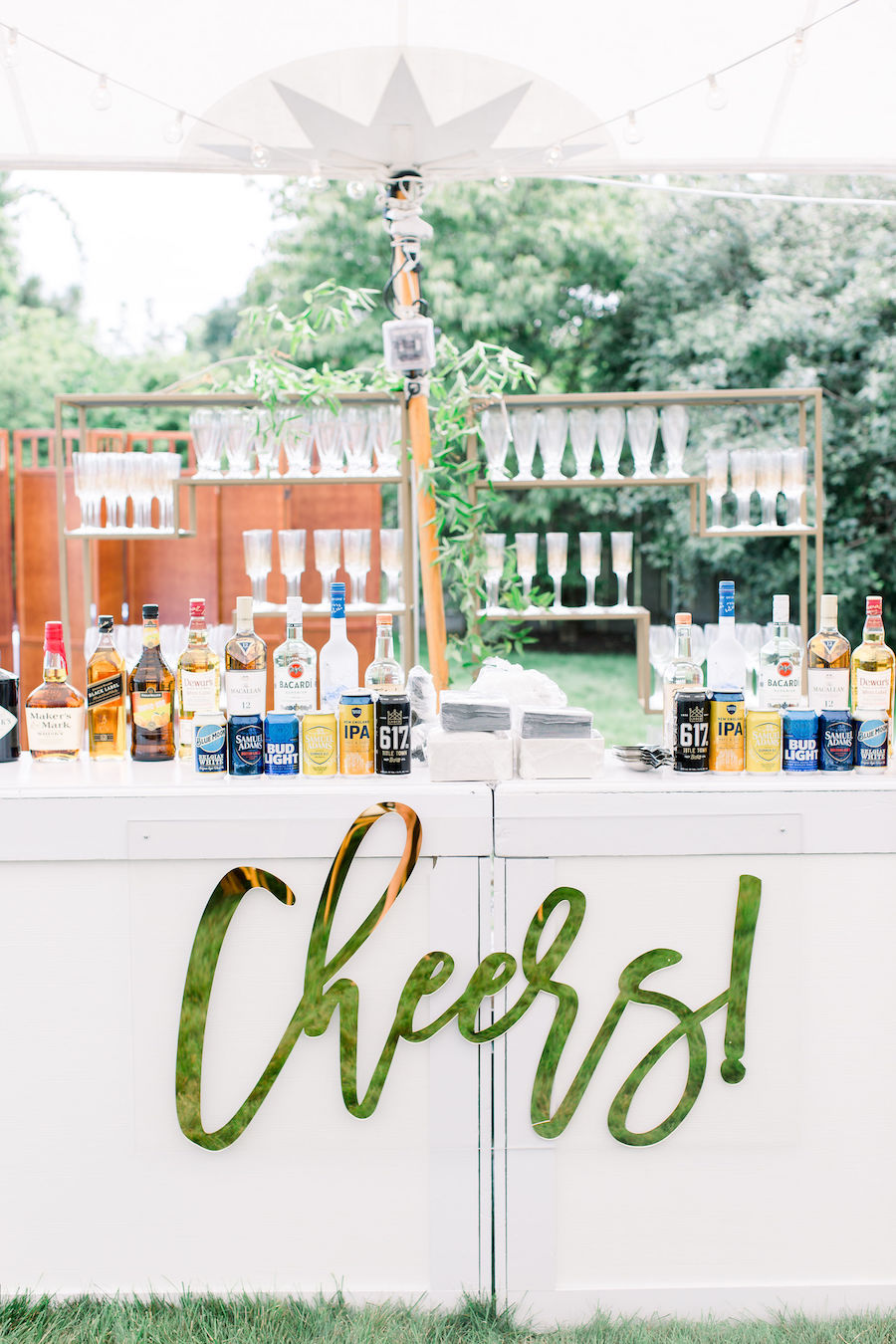 The bride’s father Charlie Bougas, president and owner of BG Events & Catering, custom made the bar, which featured an acrylic “Cheers!” sign. 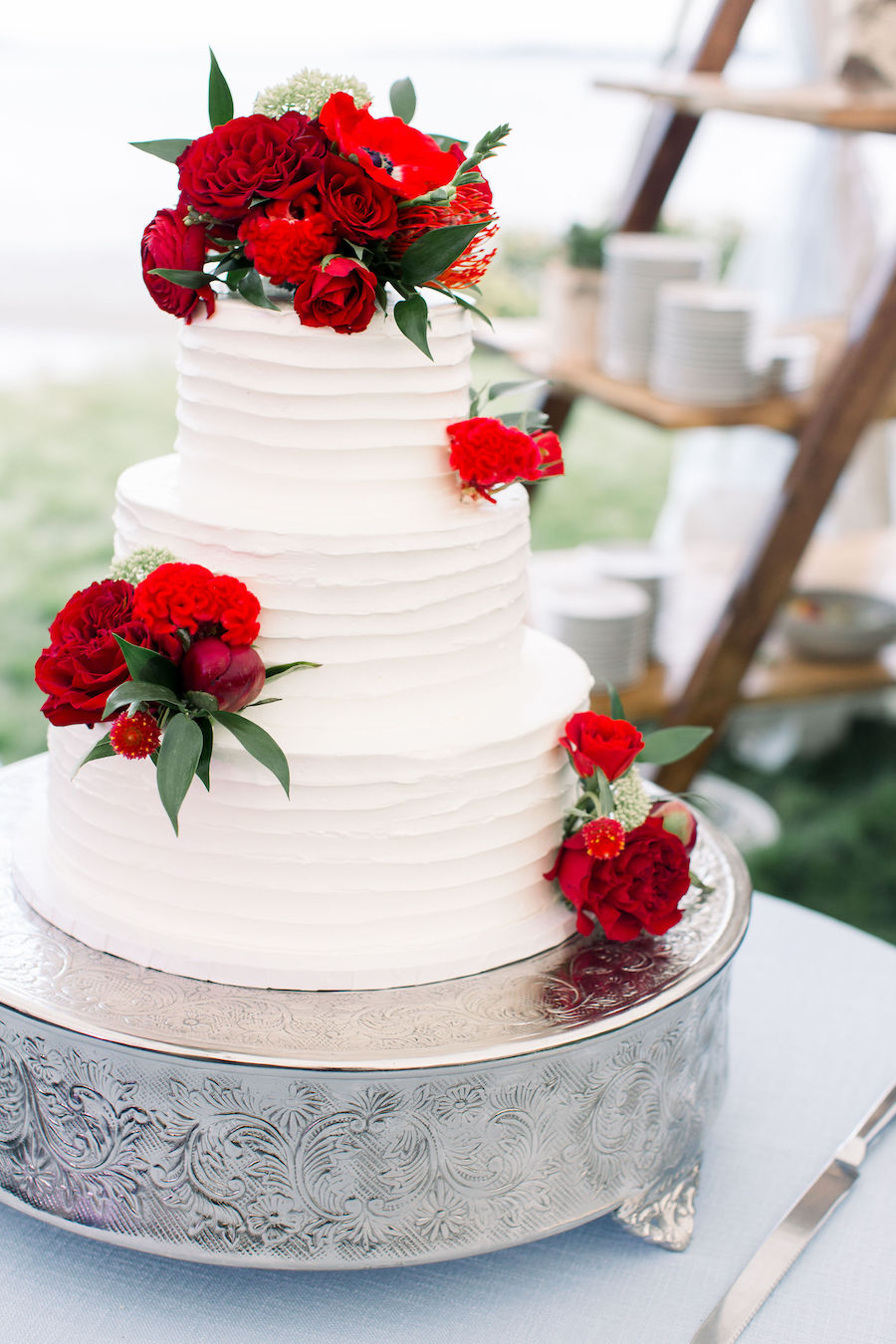 “The flowers were something I was really looking forward to for the wedding day, so we wanted some of the actual flowers to be put on the cake, too,” Ali says. The confection featured two Neapolitan tiers and one vanilla tier with a salted caramel filling. In addition, the bride and groom served homemade ice cream and strawberry-shortcake bars. 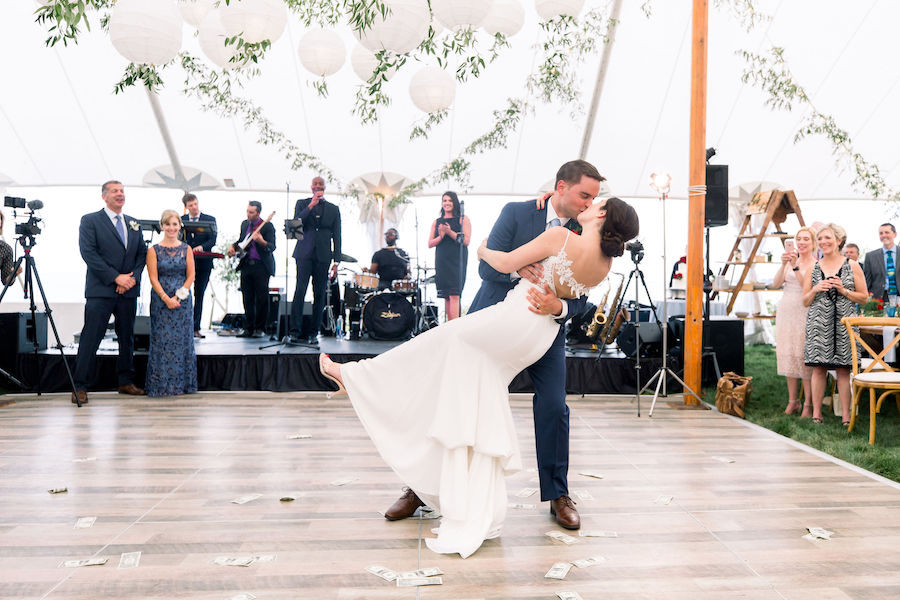 The couple had their first dance to “Your Song” by Elton John, which Ali’s parents also danced to on their wedding day. “That was one of my favorite moments,” Ali says. “It was a really special surprise for [my parents].”