On the hottest weekend of the year. 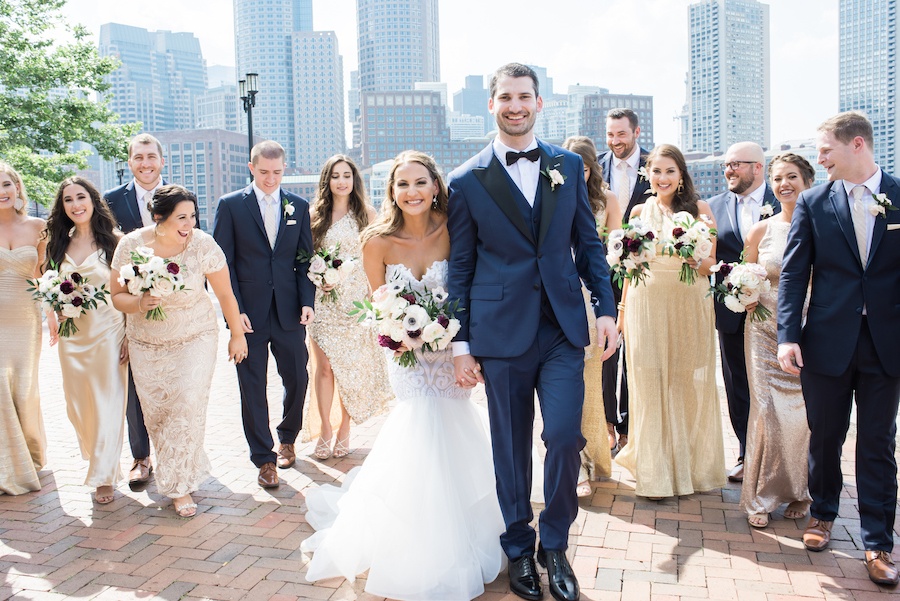 Before Litsa Pappas and Zack Waldman became a couple, they were fellow broadcast journalism majors at Syracuse University. “We were just friends in class,” Litsa recalls. “But somehow we found ourselves always going back to each other.” After sitting through many of the same courses together, they finally started dating during the spring of their senior year in 2011. When they graduated, a nearly seven-year-long period of long-distance dating ensued: Zack moved to North Carolina, and Litsa relocated to Virginia before eventually coming back to Boston where she grew up. “About a year in, we probably both knew ‘Yeah, this is it,'” Litsa explains. “Even though we were long distance, we felt like we had to keep seeing each other.” Finally in 2018, Zack, also a New England native, got a job in Boston and the pair was reunited for good.

That same year, for their seventh anniversary, the couple decided to take a weekend trip back to Syracuse. Naturally, they decided to have dinner at the Italian restaurant where they had their first date. Before they went in to eat, Zack pulled Litsa aside out on the sidewalk. He began to talk about their relationship and then got down on one knee. After Litsa said “Yes,” the two headed inside, where a reserved table with a bottle of champagne awaited. “We were able to celebrate and reminisce about our first memories together from when we started dating,” Litsa says.

As foodies who both work in the media industry (Litsa is a reporter for Boston 25 News and Zack is a digital social producer at WGBH) the couple put an all-star catering team, photographer, and videographer at the top of their must-haves list when they began planning their celebration. Also beach lovers, the couple was on the hunt for a modern venue with a city-chic vibe and a seaside setting. Their perfect match? The Exchange, a Seaport event space featuring floor-to-ceiling windows that overlook Boston Harbor. “It’s basically surrounded by water,” Litsa says. Celebrating by the sea proved especially fortuitous: The couple’s wedding weekend ended up being the hottest of the year, with temperatures in the upper 90s. It was no surprise, then, the couple was “exhausted” by the end of the night, as Litsa confesses—but in the best way possible. When the bride and groom made their way into their reception and were introduced as husband and wife for the first time, “It was amazing to [be able to say], ‘Wow we’re finally married,'” Litsa recalls. “Zack picked me up and spun me around, and then we went into a dance party surrounded by our closest friends and family.” 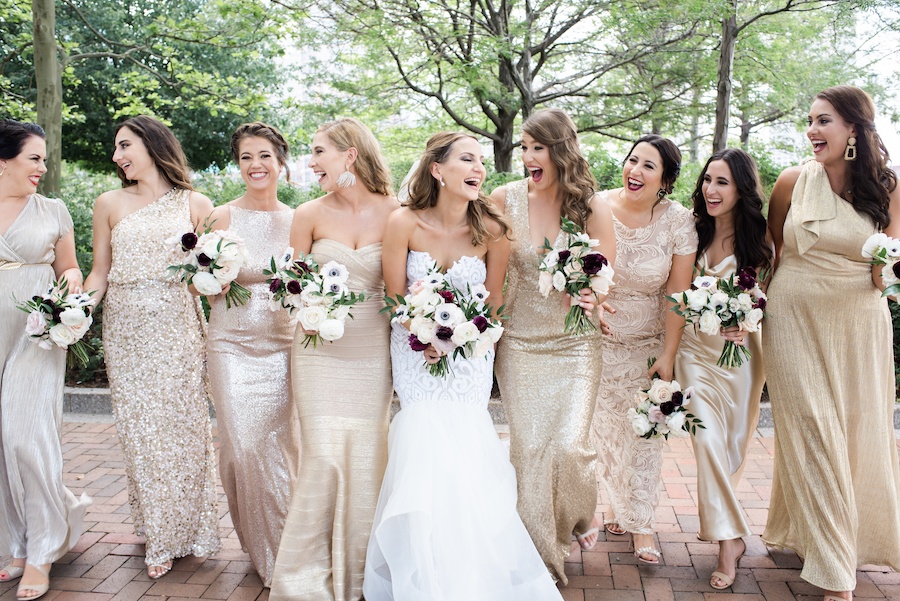 Litsa didn’t want her bridesmaids to wear the same dresses, so she asked them to instead don gold gowns of their choice. “I think I have some pretty fashionable friends and sisters and I really wanted my girls to show off their own personalities,” she explains. 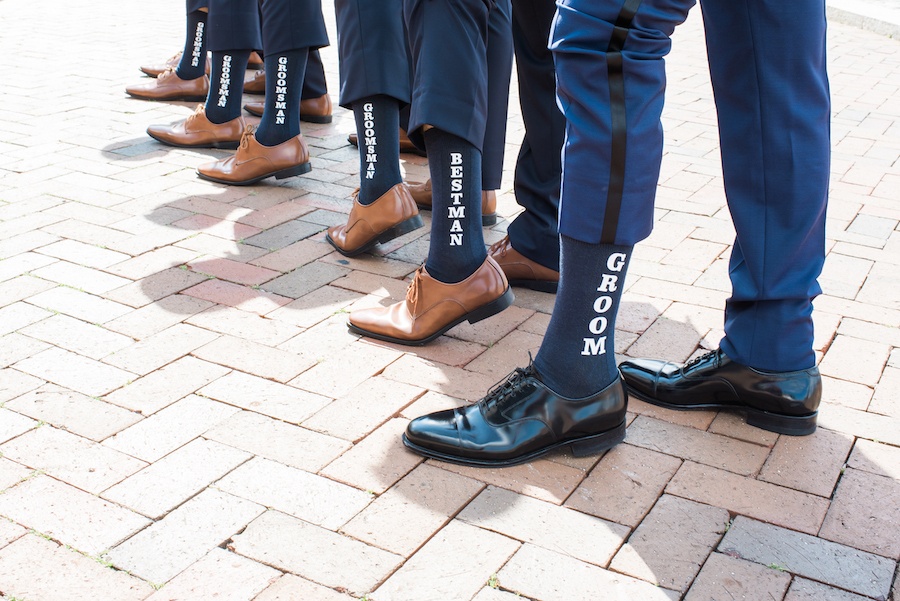 As part of a gift to his groomsmen, Zack bought the group matching pairs of socks. “Zack is kind of known for his socks,” Litsa says. “He always wears crazy ones and people think it’s hilarious.” 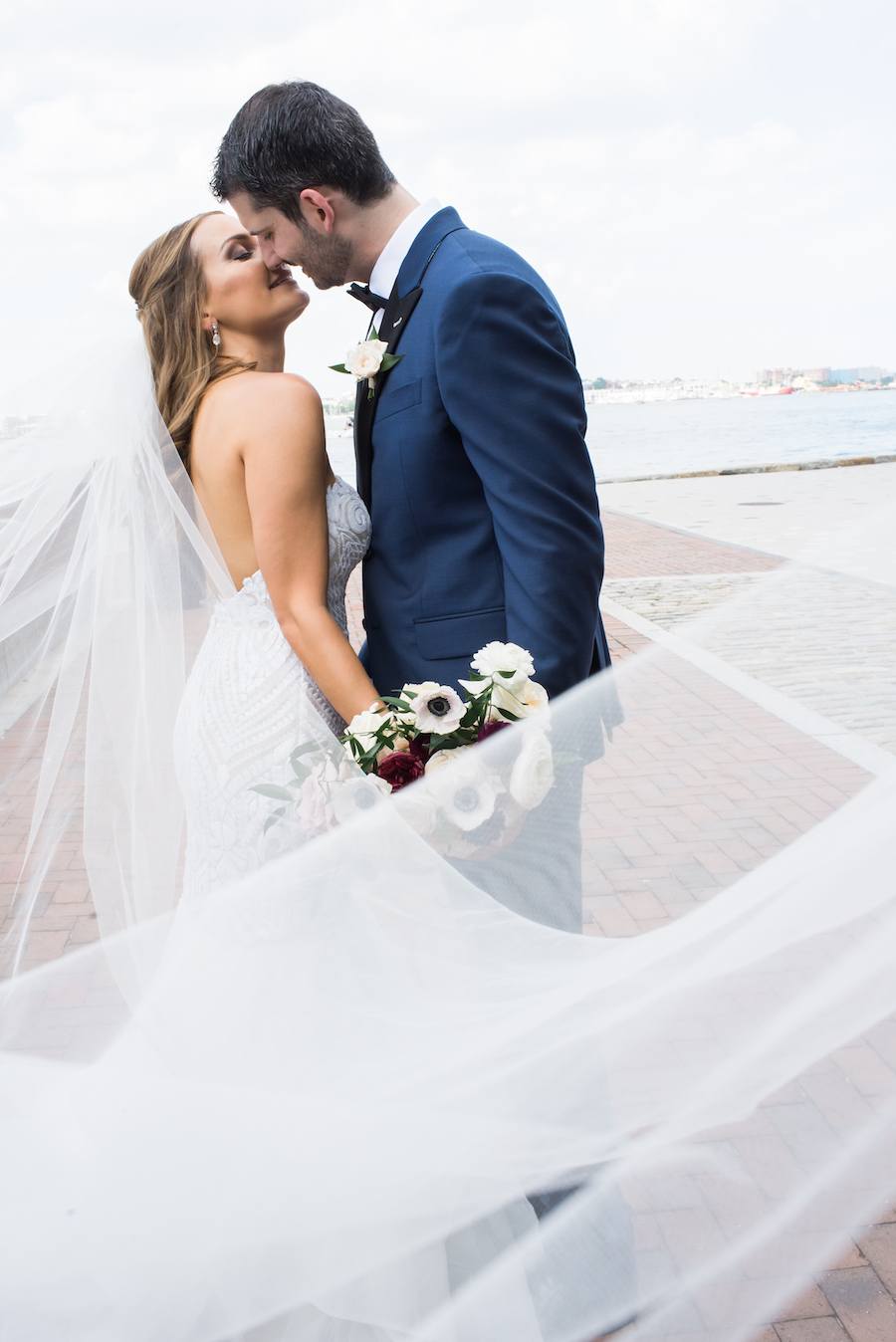 On a search for a fun and unique gown that was fitted and “not too simple,” she says, Litsa found her mermaid-style Hayley Paige gown at Flair Boston on Newbury Street. “I liked that [the dress] was modern but also had sequins on it and was sparkly. When I put it on, I started dancing. [It was] a party dress.” 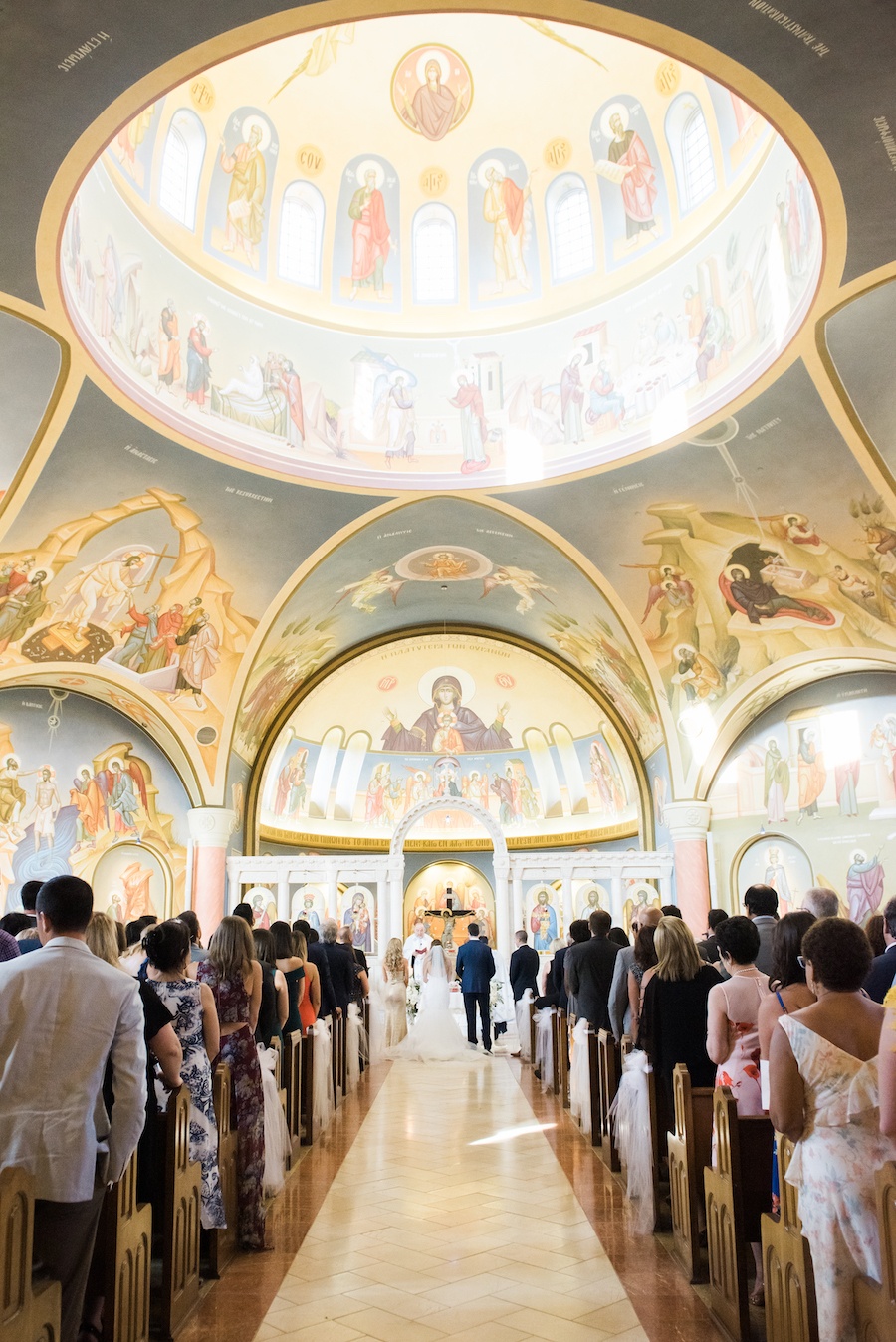 Litsa and Zack exchanged vows at Saint Catherine’s Greek Orthodox Church in Braintree, the church that the bride grew up attending with her family. “We have a lot of roots still in Greece so it was nice to have elements of our traditional Greek background in the ceremony,” she says. The couple also incorporated elements of Zack’s Jewish heritage into their day, such as breaking the glass and later dancing the Hora at the reception. 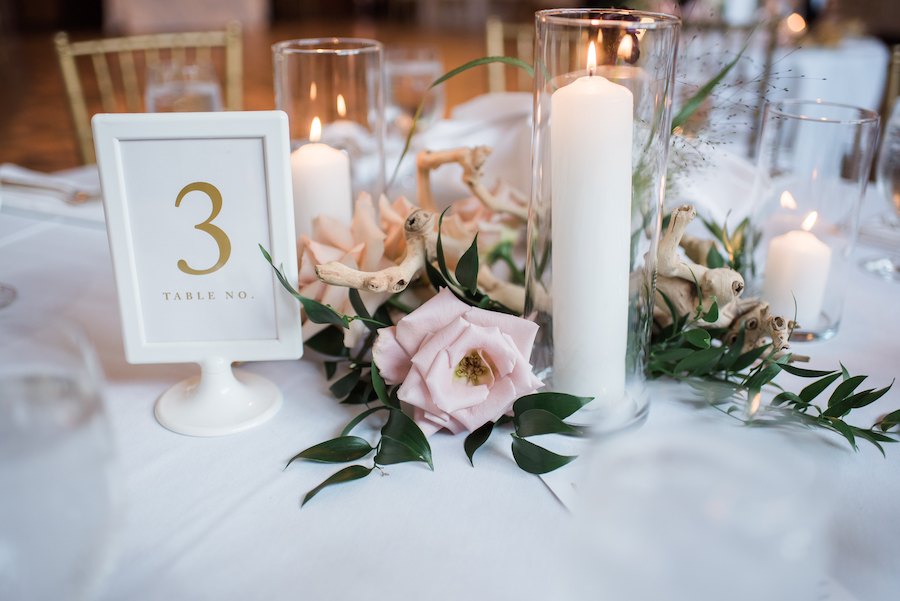 The couple wanted their tablescapes to have a modern look with a hint of romance and nods to the ocean, so florist Laurel Lane topped the tables with driftwood surrounded by pink roses, greenery, and candles. 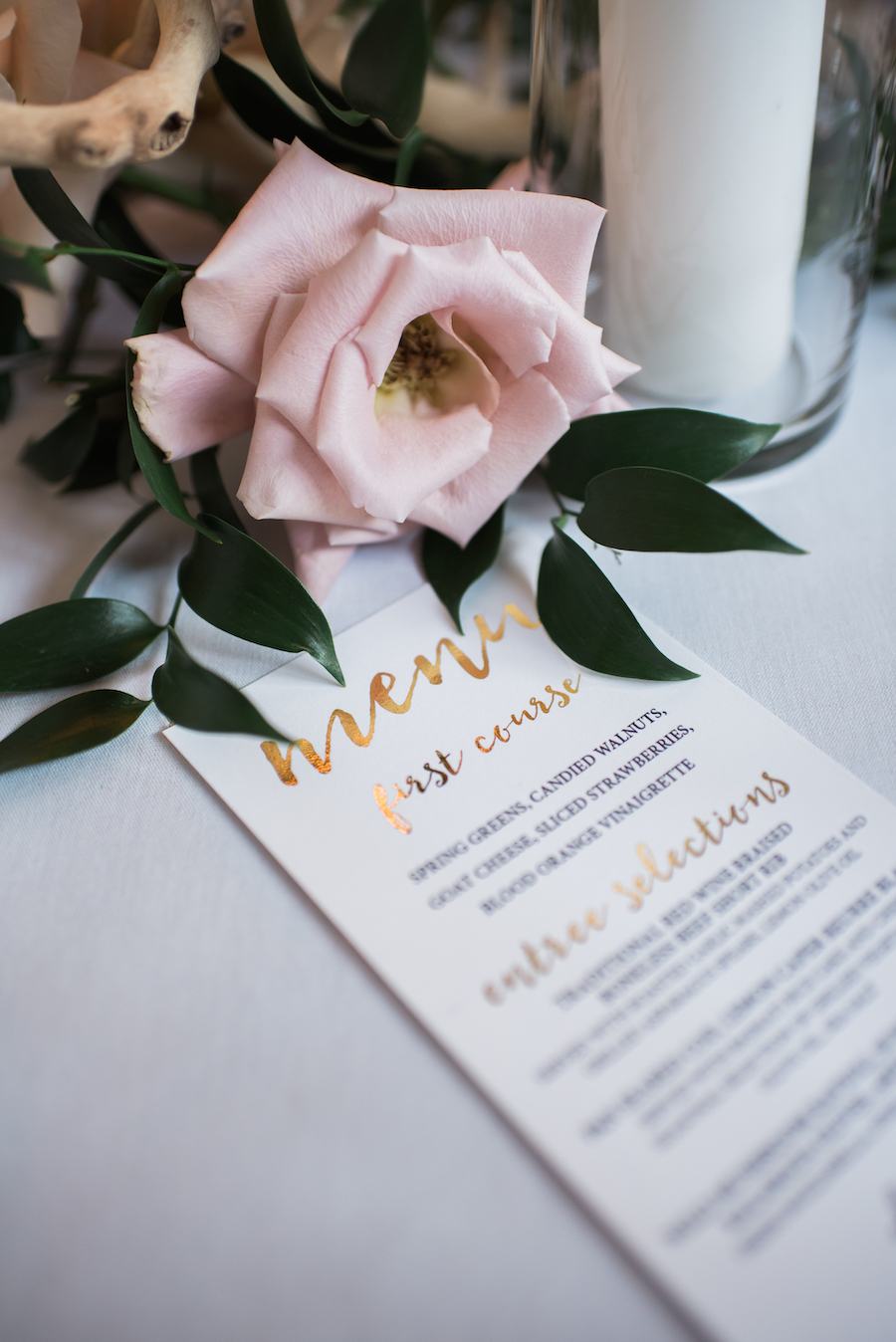 After Litsa chose gold for her bridesmaids’ dresses, she also decided to weave in touches of the color throughout the reception décor, including the cocktail napkins, the table numbers, and the menus, which she designed herself. 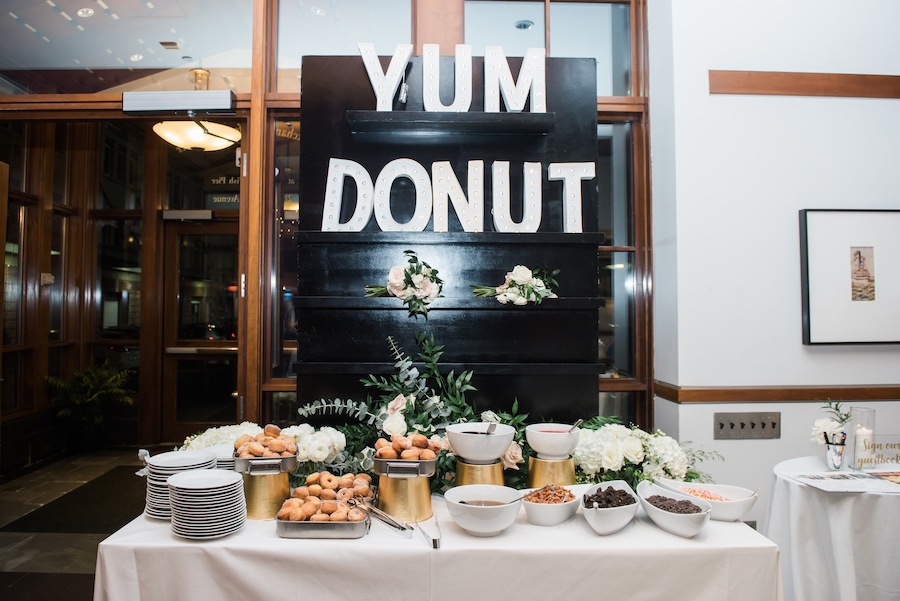 At their reception, the bride and groom delighted guests with a doughnut bar offering an array of toppings. They also served homemade Greek desserts, such as baklava, which the bride’s grandmother baked. 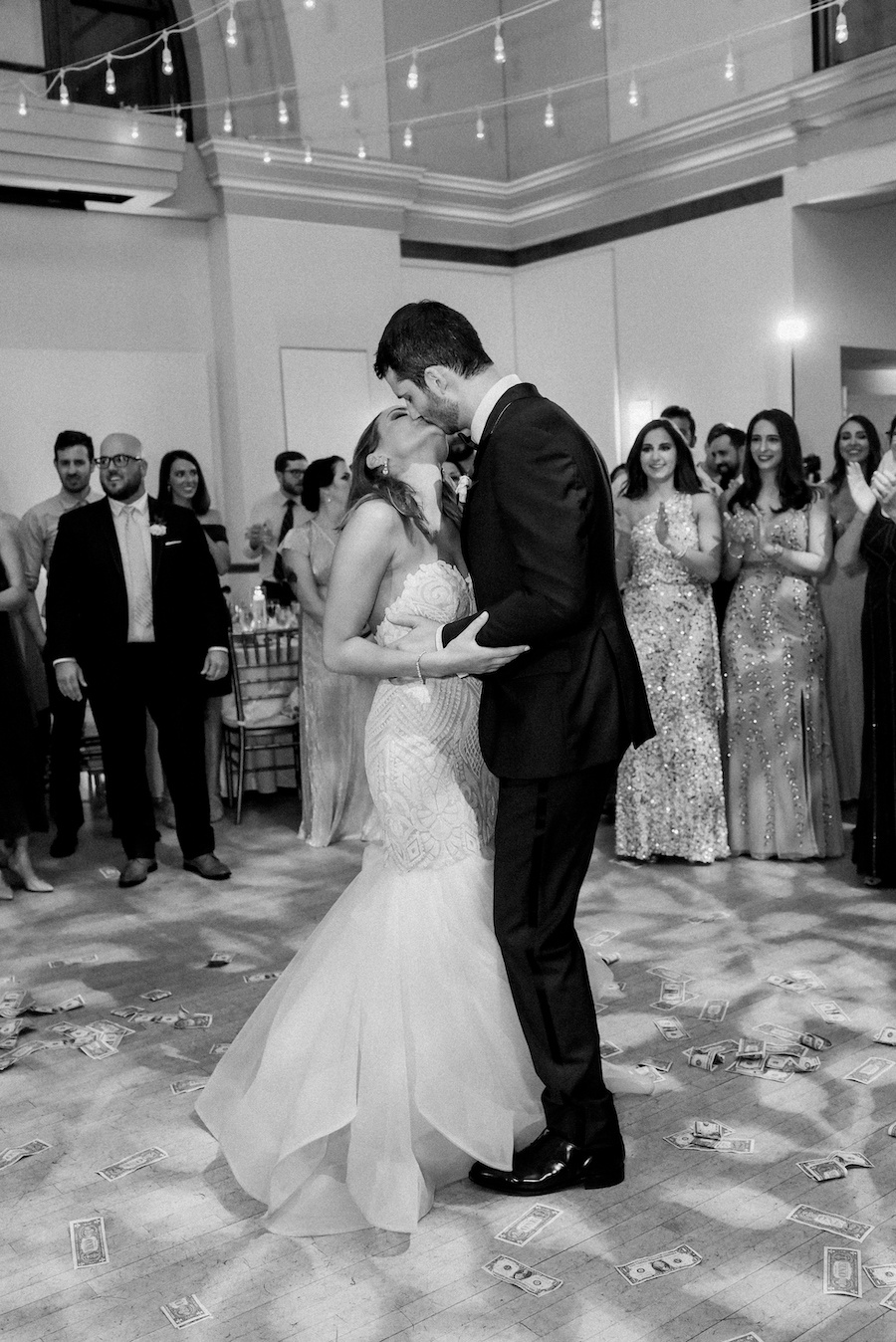 The couple took their first dance to “Sweet Disposition” by The Temper Trap. Litsa and Zack had several of their early dates at an independent movie theater that would play the song before the movie began. “I didn’t really know it at first, but because we went to the movies so often we started to memorize the song and dance in our seats and sing,” Litsa says. “So whenever we hear it now, we think about our first dates.”