Could This October Gedney Farm Wedding Be Any Cuter? 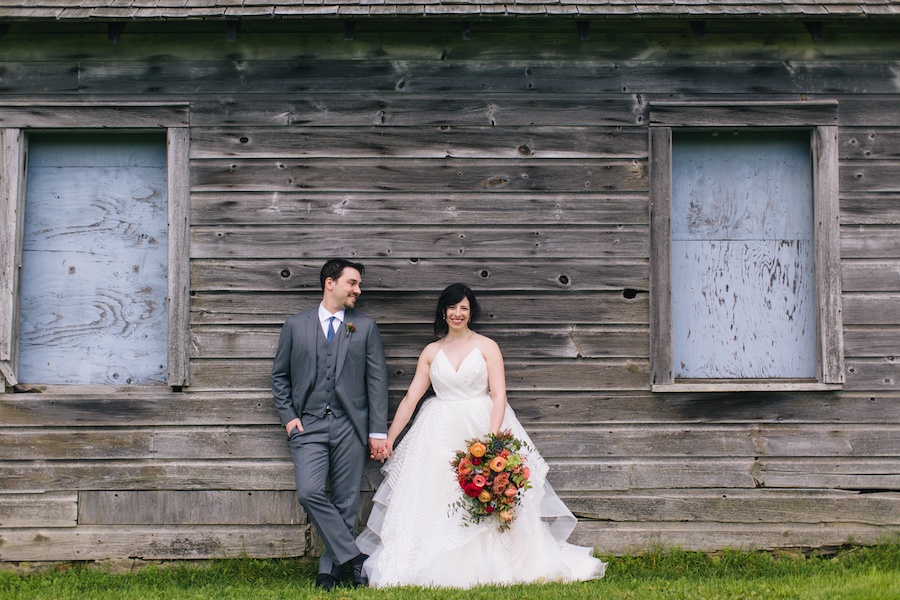 Becca Orel and Ben Ehrenreich were both about to take a break from three years of searching for “the one” on OkCupid when Ben suddenly showed up in Becca’s collection of matches in 2015. She hadn’t seen him on the app before, so she sent him a message. They began chatting about the West Wing, 30 Rock, and Buffy the Vampire Slayer, and then about a week later decided to meet at a wine bar for a drink. It was pouring that evening, which meant that Becca was drenched by the time she walked in. But, so as not to embarrass her, Ben pretended not to see as she quickly spruced herself up using her phone’s camera. “I was a little frazzled,” Becca recalls with a laugh. It didn’t matter though: The two hit it off.

About one year into dating, the couple began to talk about marriage. “It was all very much on the table,” Becca says. Exactly two years into their courtship, getting married went from a possibility to reality when the couple took a trip to Paris. Ben brought his grandmother’s engagement band, which he’d outfitted with the diamond from Becca’s grandmother’s engagement ring. On their anniversary, the couple headed to Luxembourg Gardens. What happened next is no surprise: “I proposed in the bandstand,” Ben says.

Twenty-three years ago, when Ben was just a tween, he attended his aunt and uncle’s wedding at Gedney Farm. “I said, ‘Man, I’d love to have a wedding like they had,'” he recalls. When he shared his rustic vision with Becca, she was on board, too. They began searching for similar barn venues near Westchester County, where Ben’s parent’s live, and around Philadelphia, where Becca is from. But their hunt proved unfruitful. Soon though, their luck turned. “We said, ‘Why don’t we look and see about Gedney Farm,'” Becca says. “It turned out [the venue] had the exact week [we wanted] available.” So on a Wednesday, they dropped everything, got in the car, and went to see it in person. “We drove up to this beautiful farmhouse with all of this greenery and I just started crying,” Becca remembers. “Ben was like, ‘What’s wrong? And I said, ‘I just want to get married here.'” They put the deposit down that day, and got straight to planning a colorful, autumnal celebration for all of their closest friends and family. And when the day finally arrived, it all unfolded just as they’d imagined it. “We wanted it to last longer,” Ben says. “We thought, ‘Man this was a great freaking party.'” 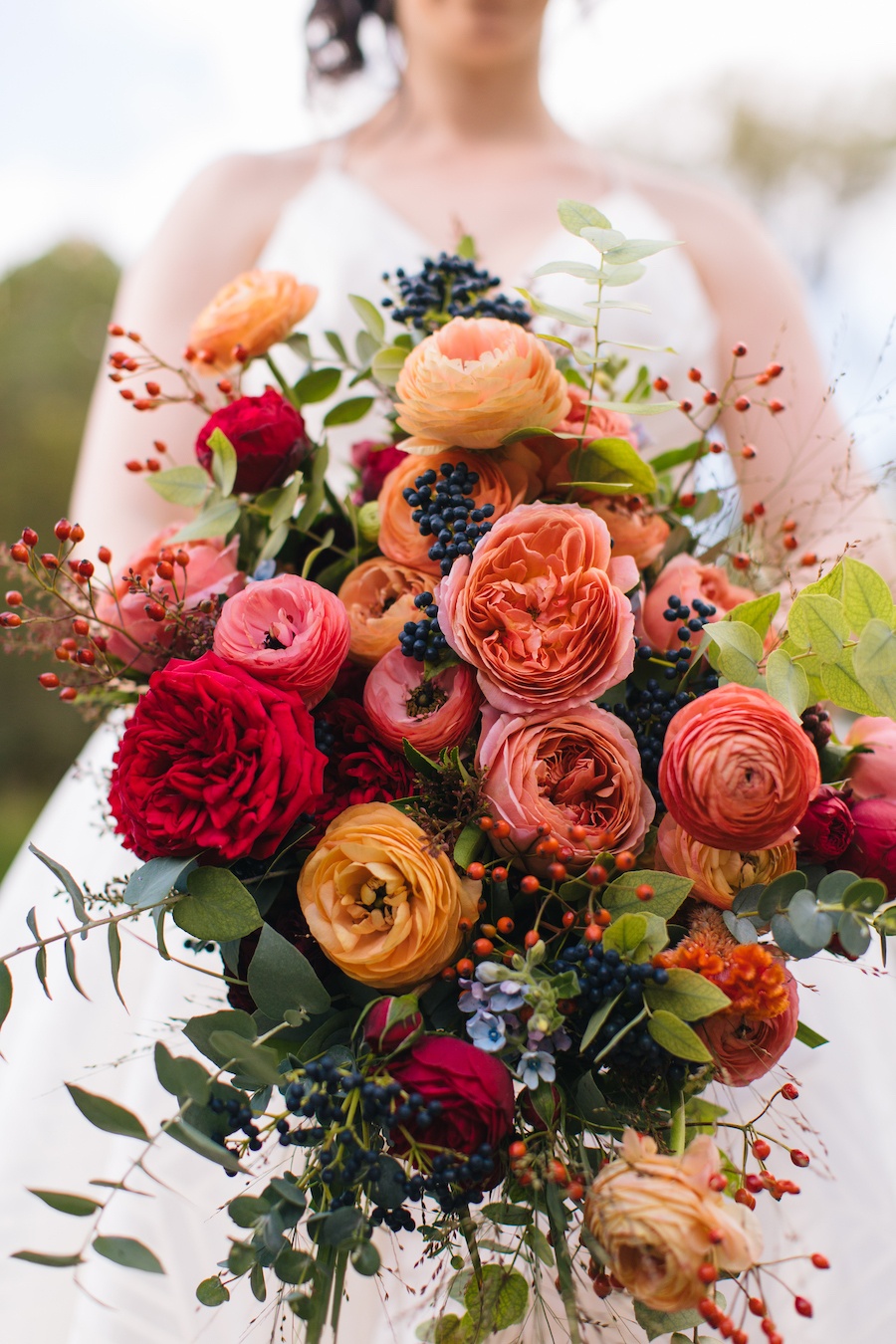 “It was enormous,” Becca says of her bouquet, made by Providence-based florist Flowers by Semia. As for the color palette? “I wanted things that were bright,” the bride says. 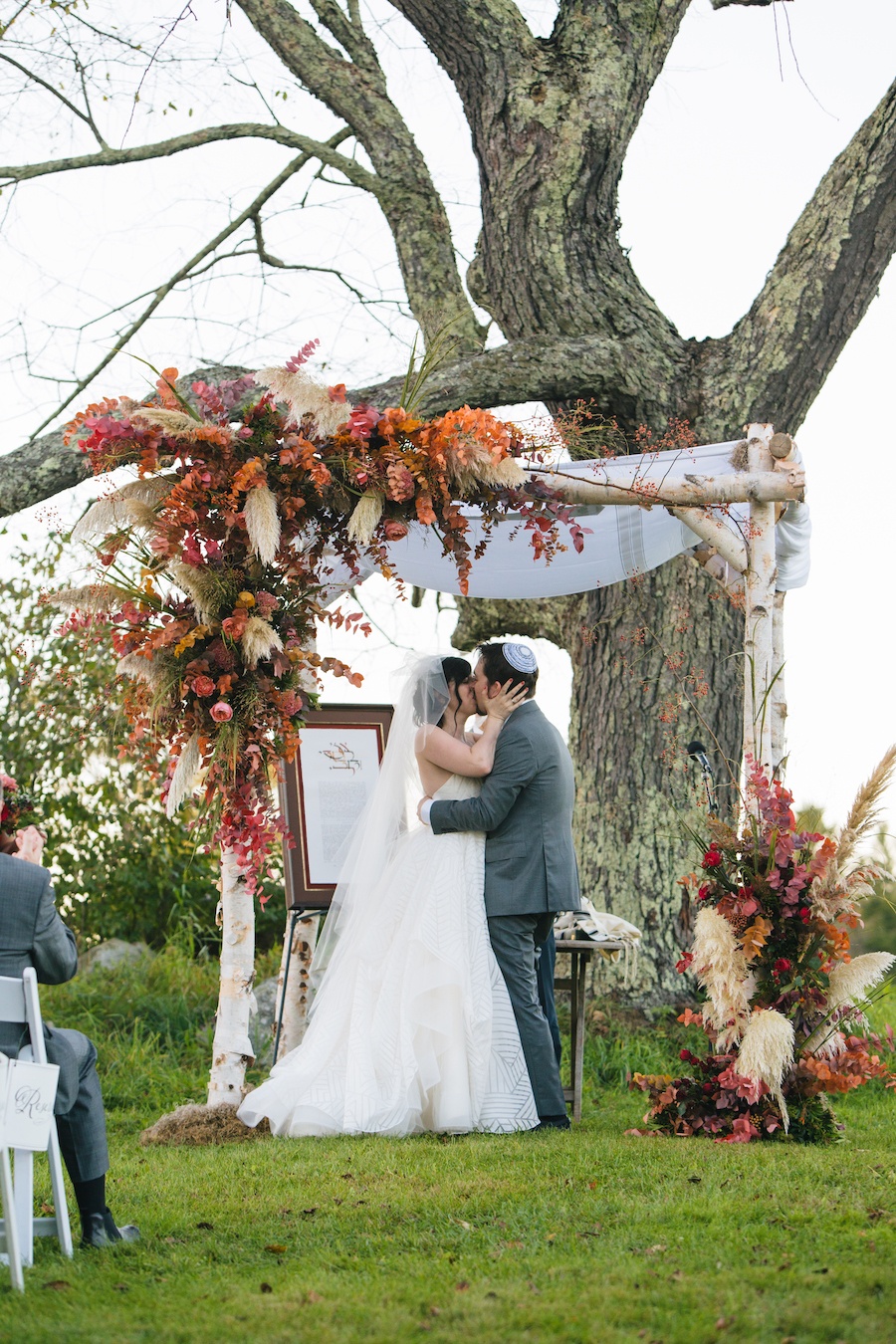 “[Our chuppah] felt incredibly organic,” Becca says. “It looked like it had sprung from the earth.” At the top of the floral-adorned birch structure, the couple hung a prayer shawl that Becca’s sister’s fiancé brought back from a trip to Israel and later used when he wed Becca’s sister months after the couple’s nuptials. “We’re going to embroider on the names of all the couples who use it and their wedding dates,” the bride says. 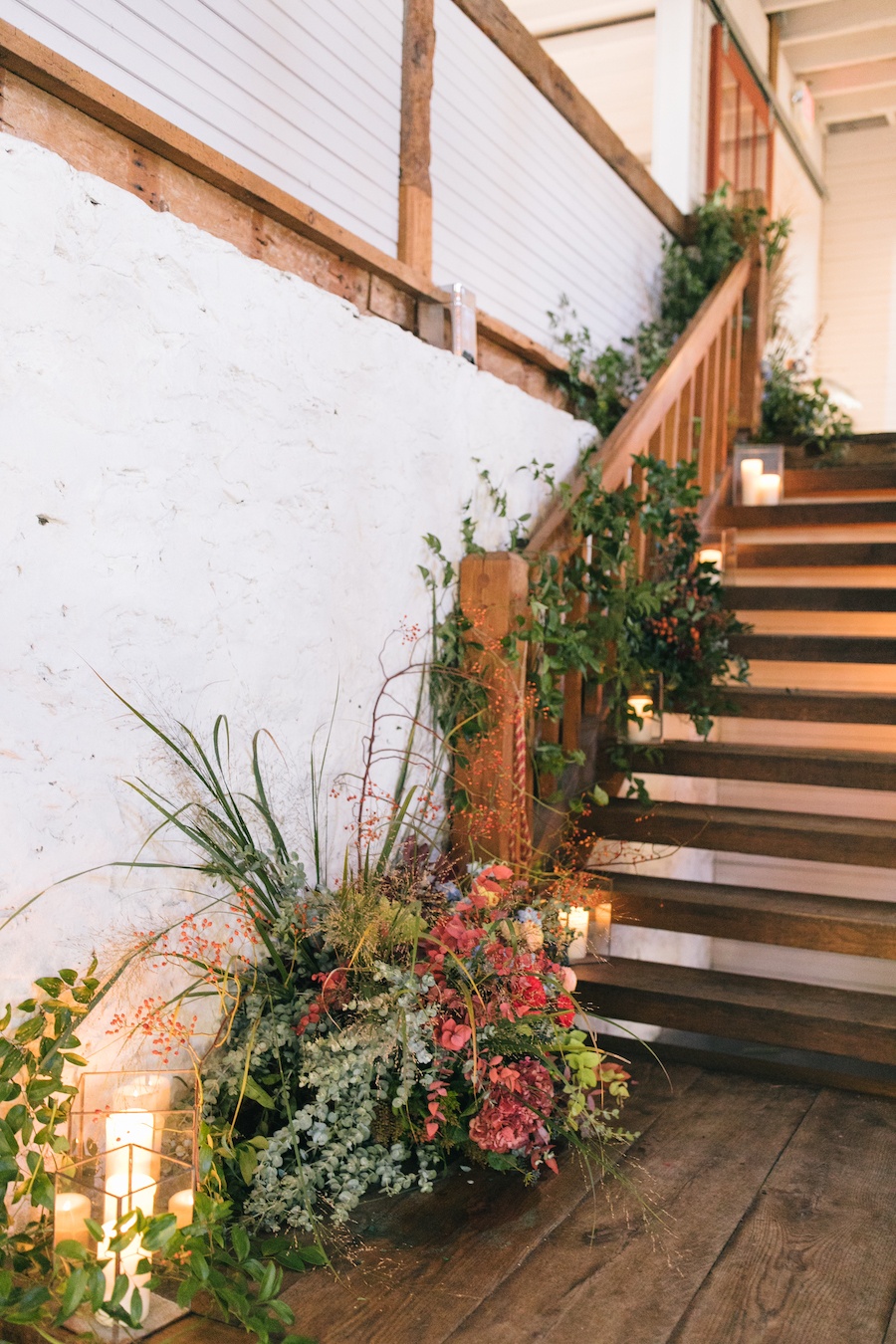 “We didn’t know what [the stairs] were going to be like, but when we got there, they were really beautiful,” Ben says of the floral installation Flowers by Semia created for the staircase in Gedney Farm’s event barn. 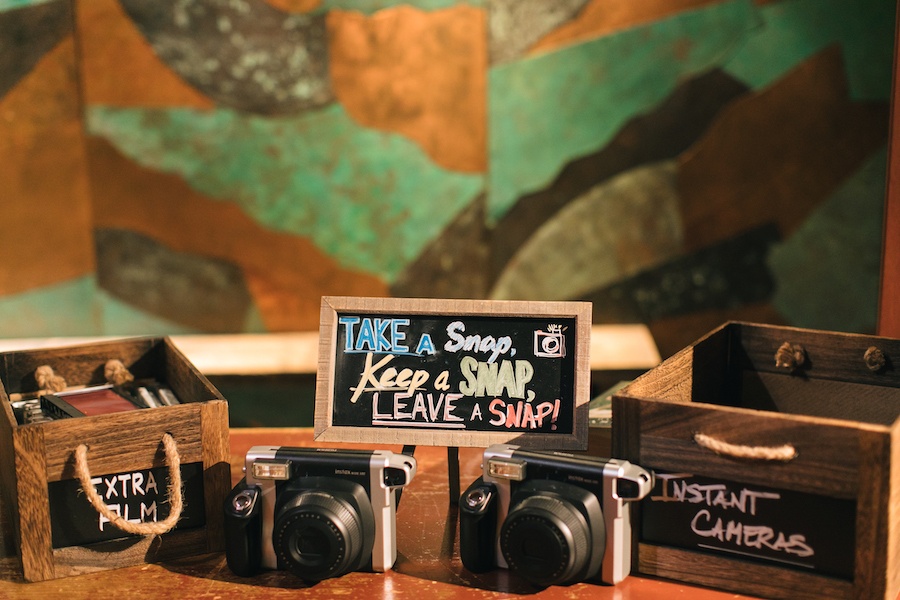 The couple provided instant cameras for their guests to use during the cocktail hour and reception. Their attendees brought some of the photos home and also left some for Ben and Becca to keep. “It was an awesome way for us to see bits of our friends and family enjoying the reception that we might have missed,” the bride says. 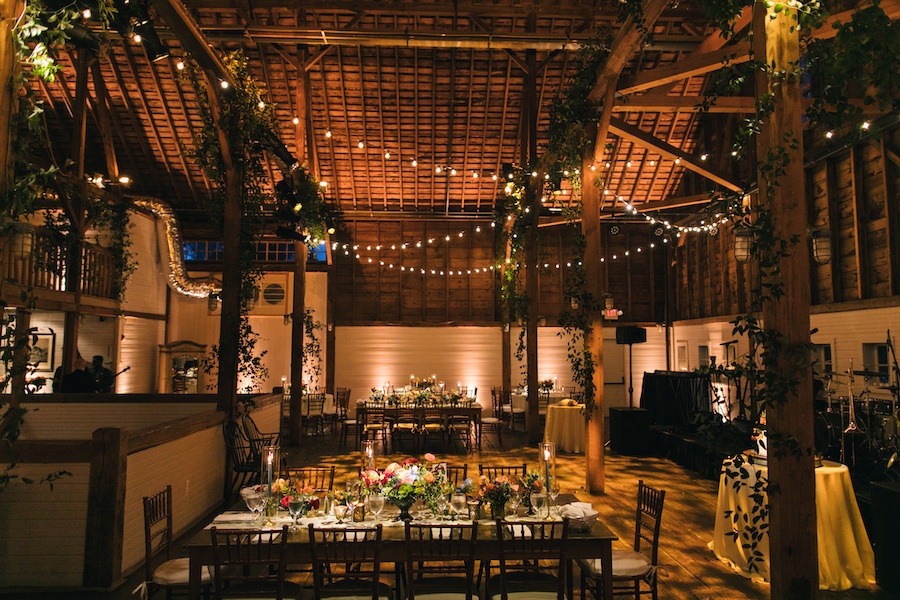 “We wanted to embrace the barn setting, so [our reception] had a very rustic vibe,” the groom says of the reception space, which featured hanging vines and dramatic lighting that Ben, who is a lighting designer, dreamed up with the help of Frost Productions. 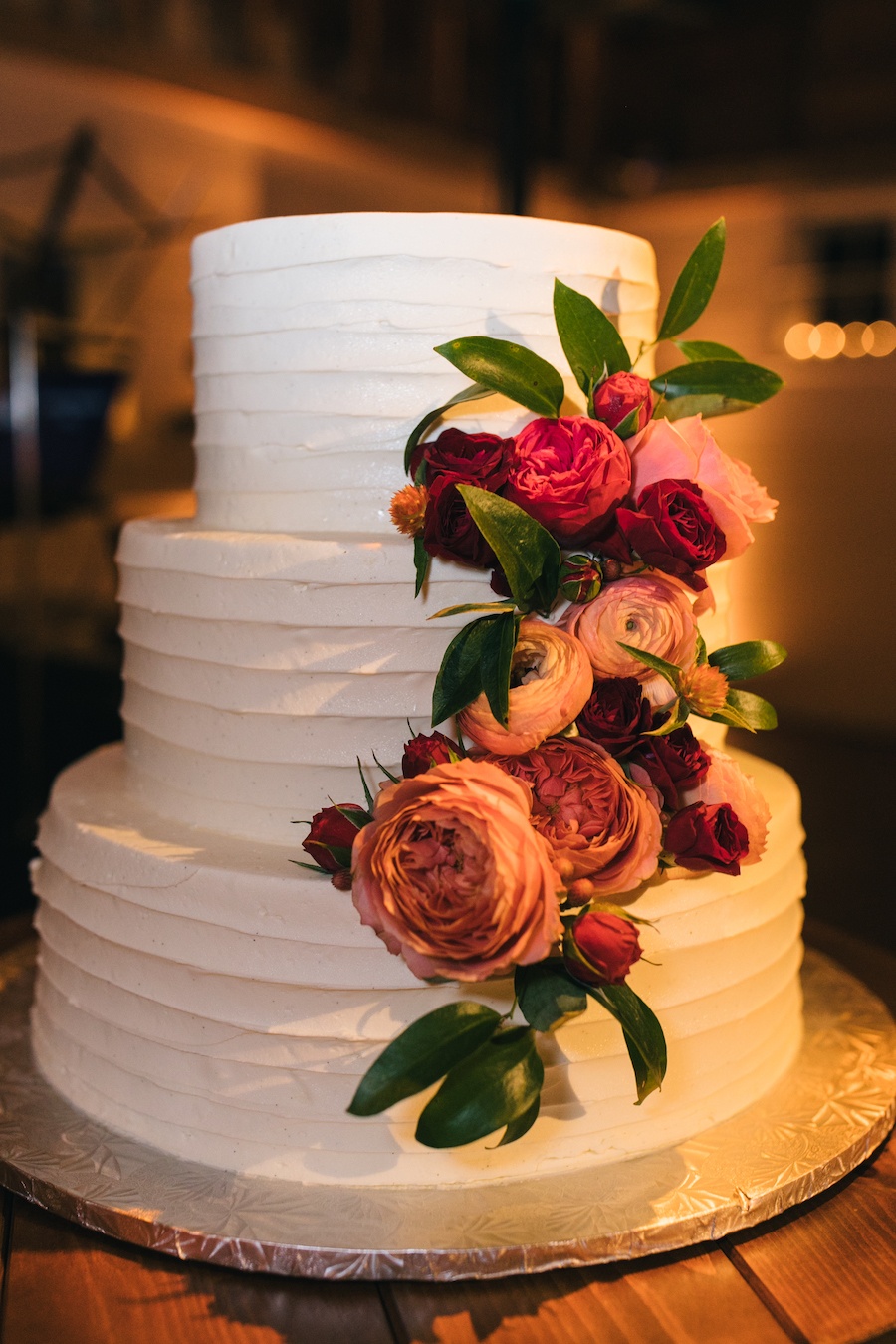 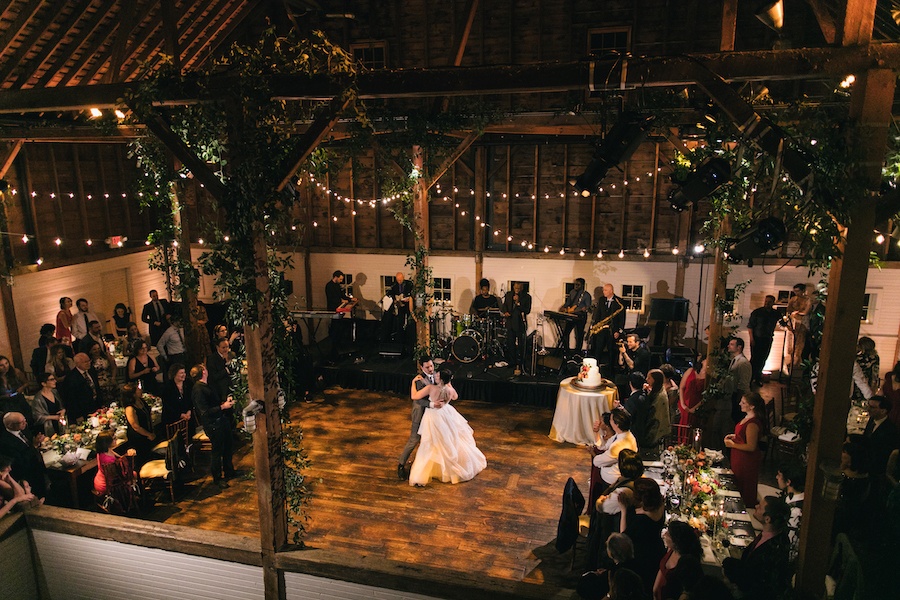 For Ben and Becca’s first dance, the band played “On the Street Where You Live,” from the musical My Fair Lady, as covered by Willie Nelson.