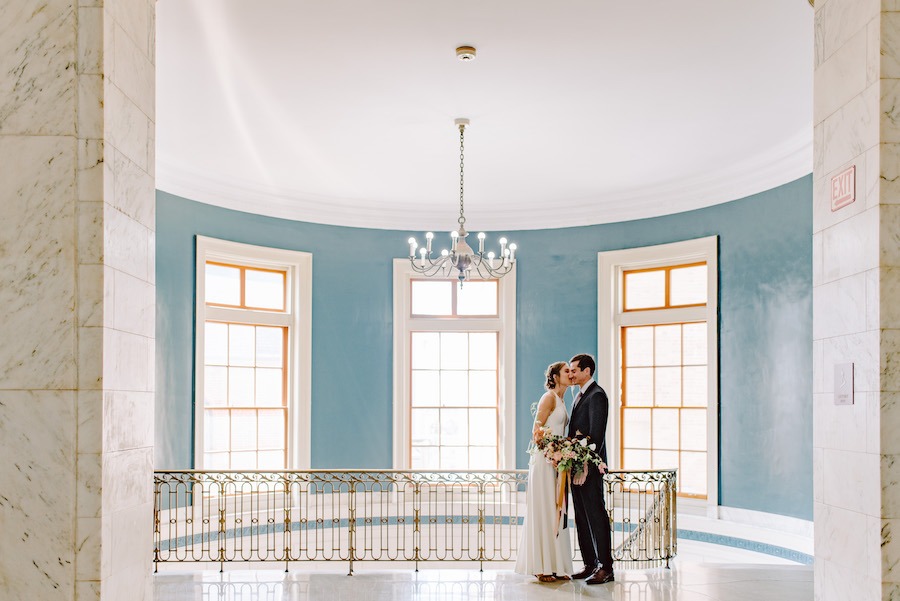 The year was 2010. The setting? The University of Virginia. Abby Clement and Alex Dagley were both ultimate frisbee players at the school, and met when their teams hung out together. “We were friends for a little bit at first, but I think we both kind of knew it was going to be more than that,” Abby says. “Early on, we got into really cool conversations, but also both felt immediately comfortable being our weird selves with each other.” After they graduated, they dated long-distance for about six months. At that point, though, they’d had enough. “I think we both said, ‘This is awful,'” Abby recalls. So she moved to Nashville, where Alex was living, and not long later, they both moved to Boston.

Years into their relationship, both Alex and Abby knew they’d found “the one,” but they weren’t sure they wanted to get married. “I was the one who was kind of like, ‘Why get married? We’re really happy together and we know we’re going to be together forever,'” Abby explains. “I viewed it as more of a cultural thing that I’d never grown up really thinking about or wanting to do.” Over the course of two years, the pair took the time to discuss what marriage meant to them, and ultimately decided it was something they wanted to do, Abby says. So in December 2018, the pair headed to Ipswich to cut down a Christmas tree for their home in Malden. They brought it back, put it up, and began to decorate. “As soon as we put all the lights on and plugged it in, I turned around and Alex was on one knee,” Abby recalls. “It was really, really nice.”

As the couple began planning their nuptials, they focused on bringing together their families to celebrate and get to know each other. Accordingly, they decided to only invite relatives. While they were searching intimate venues to accommodate their 50 guests, the bride and groom headed to Portland to visit Abby’s best friend Mary. On that trip, something dawned on Abby: “I thought, ‘God, Portland is kind of the perfect place,'” she says. They began putting together what she calls a “mini destination wedding,” with a ceremony at Portland City Hall, which the bride says made things “really easy.” The pair’s other priority? Fantastic food. Months earlier, the couple had dined at Chaval, a Portland brasserie with Spanish and French influences, and fell in love with the restaurant venue just a few bites in. “The food was amazing, and it’s an adorable space,” Abby says. When their wedding day finally arrived, everything was exactly as they’d hoped. “It was nice that we were able to just be ourselves within the bigger moment and have a great time,” the bride says. 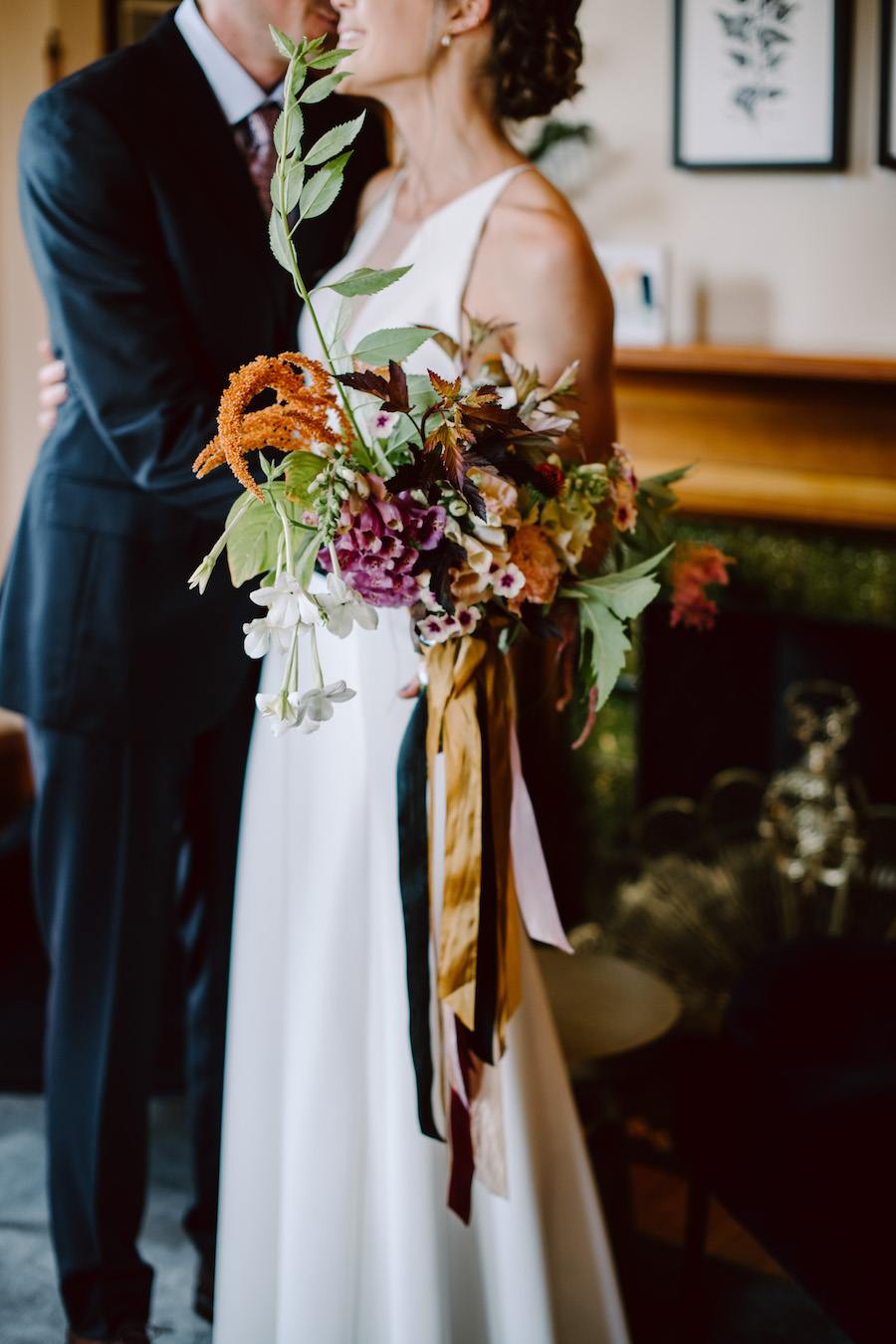 “It was amazing and really, really different,” Abby says of her bridal bouquet. For the arrangement, she asked Field’s Megan Hevenor for a splash of color, abundant texture, and an asymmetrical shape. 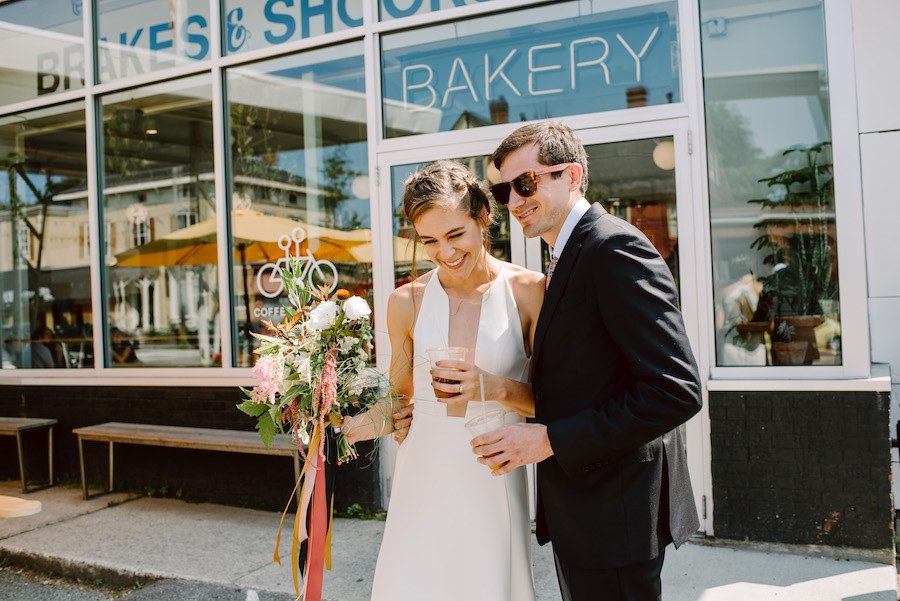 Before their ceremony, Abby and Alex stopped at Tandem Coffee Roasters for a caffeine fix. “We make a point every morning to have breakfast and coffee together before work. It’s a part of our ritual that we both appreciate, so I thought it was a nice and symbolic,” the bride says. “And also, you always need coffee.” 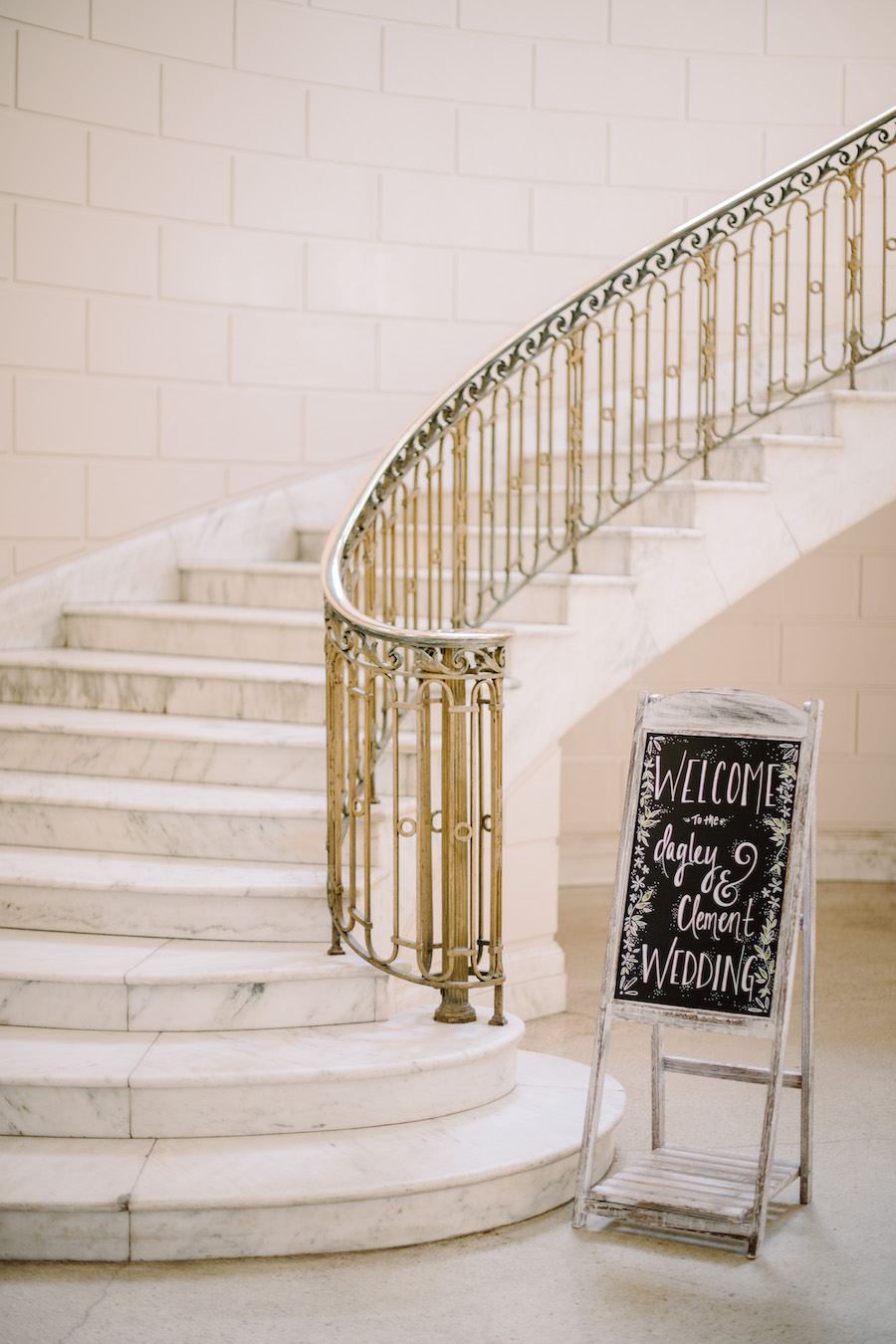 “I’m really into older buildings and thought a city hall wedding would be nice,” Abby says of the ceremony locale. The bride’s cousin Holly, a graphic designer, decorated the chalkboard the couple placed at the foot of the staircase leading to the room where Alex and Abby swapped vows. 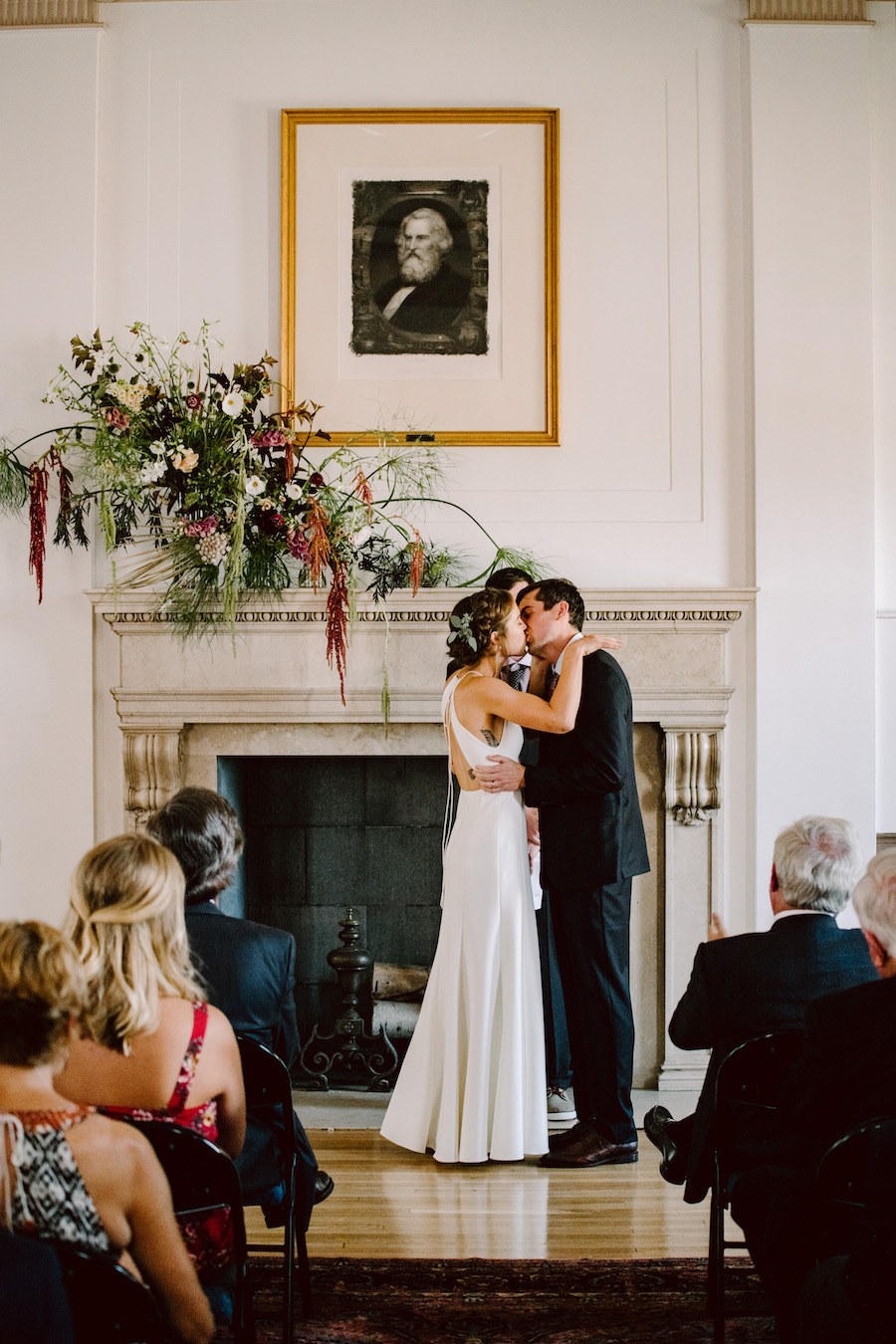 For the couple’s ceremony, which was officiated by Alex’s best friend, Carter, Hevenor created a free-flowing floral installation to perch on the mantelpiece. “That was the nice thing about having a fireplace,” Abby says. “You have the space to create one focal point.” 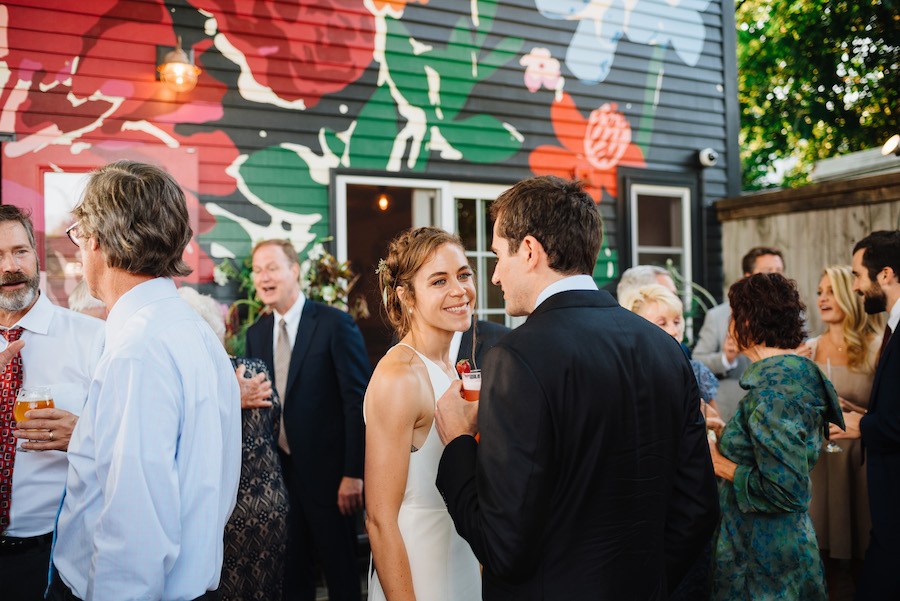 Abby and Alex’s cocktail hour took place outside on the patio at Chaval, where the duo mingled with guests while enjoying drinks and hors d’oeuvres. “The weather was perfect and the energy was great,” the bride says. 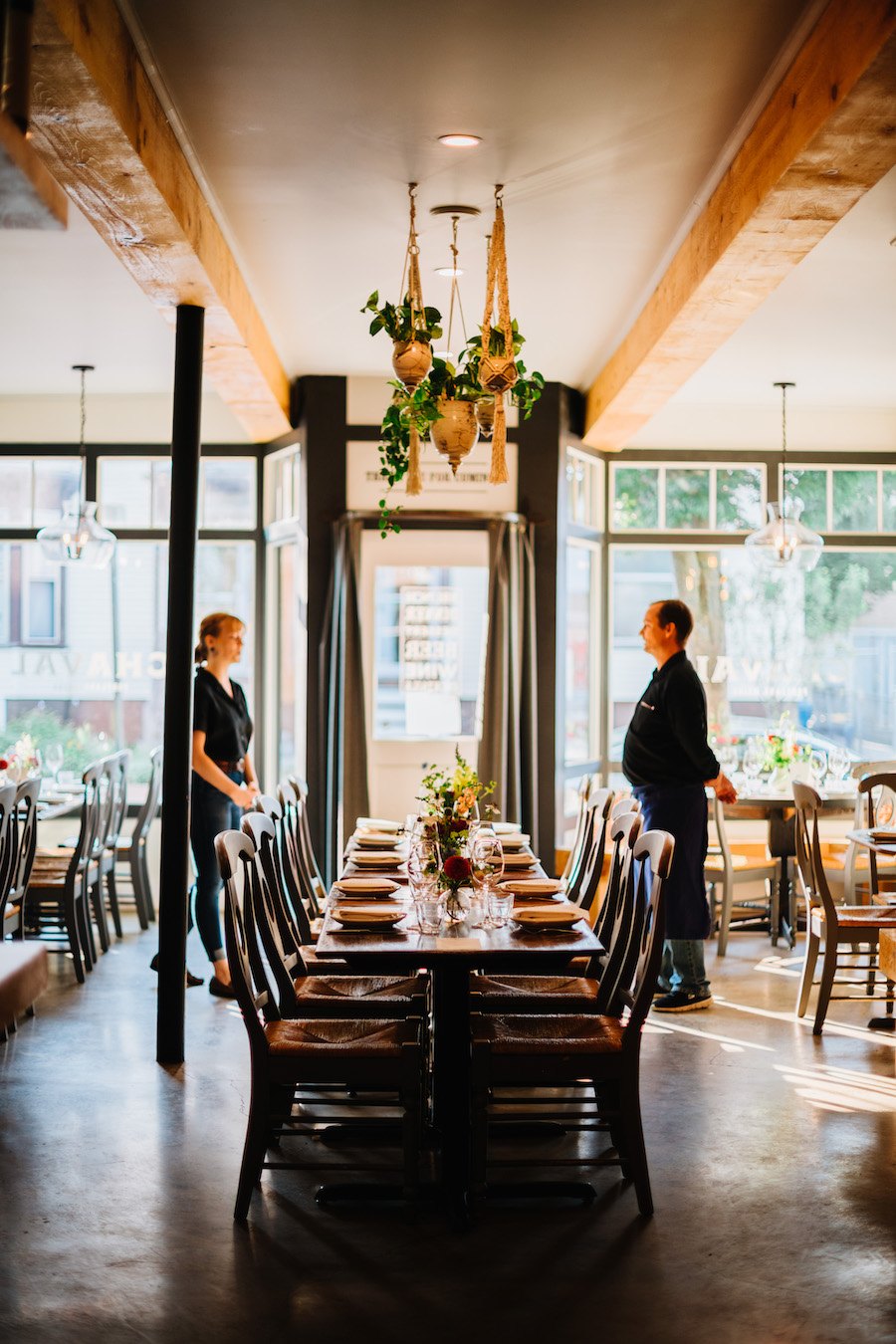 Chaval—a sunlit, inviting space—required no additional decoration, Abby says, save for small vases of wildflowers that the restaurant’s staff placed atop the tables. 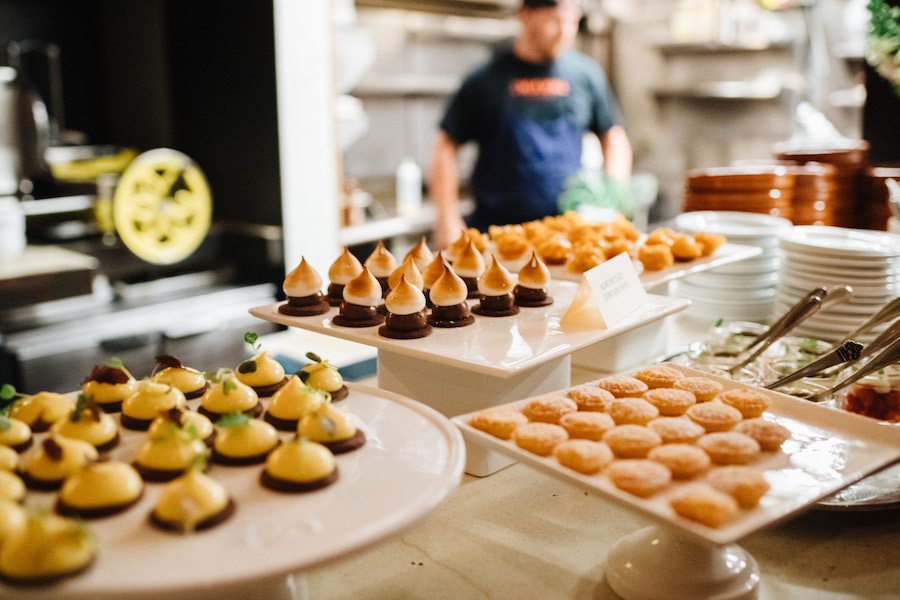 After a family-style dinner featuring halibut, strip steak, and eggplant, the couple treated guests to an array of chocolatey and fruity confections including lemon tarts, cream puffs, and s’more bites. “I think I had six of everything,” Abby says with a laugh. 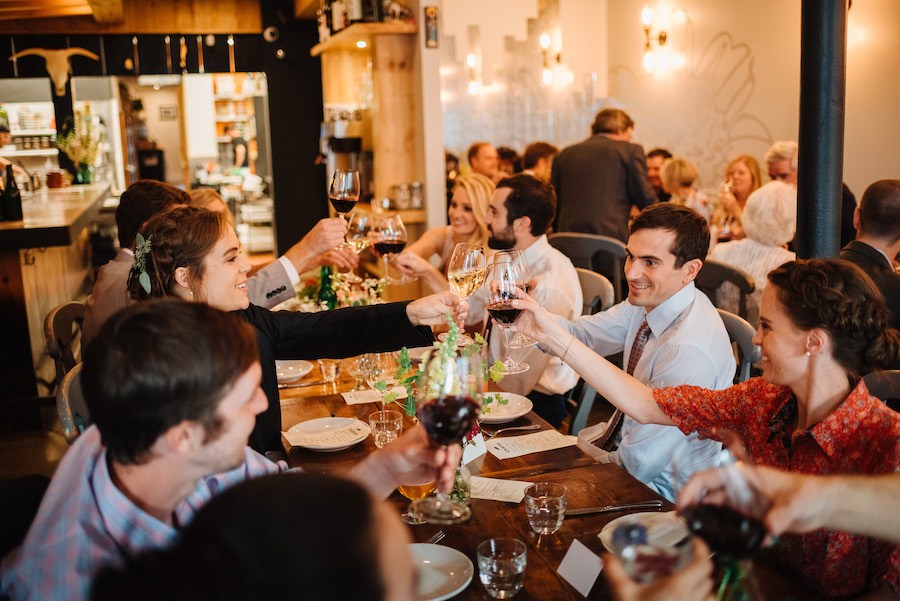 “We were so pleased with how everything went,” Abby says of the wedding day. “Our families got to meet and everybody liked each other. It was just a really special nice night.”