The bridesmaids and 10 (!) flower girls adorned their hair with the prettiest blooms. 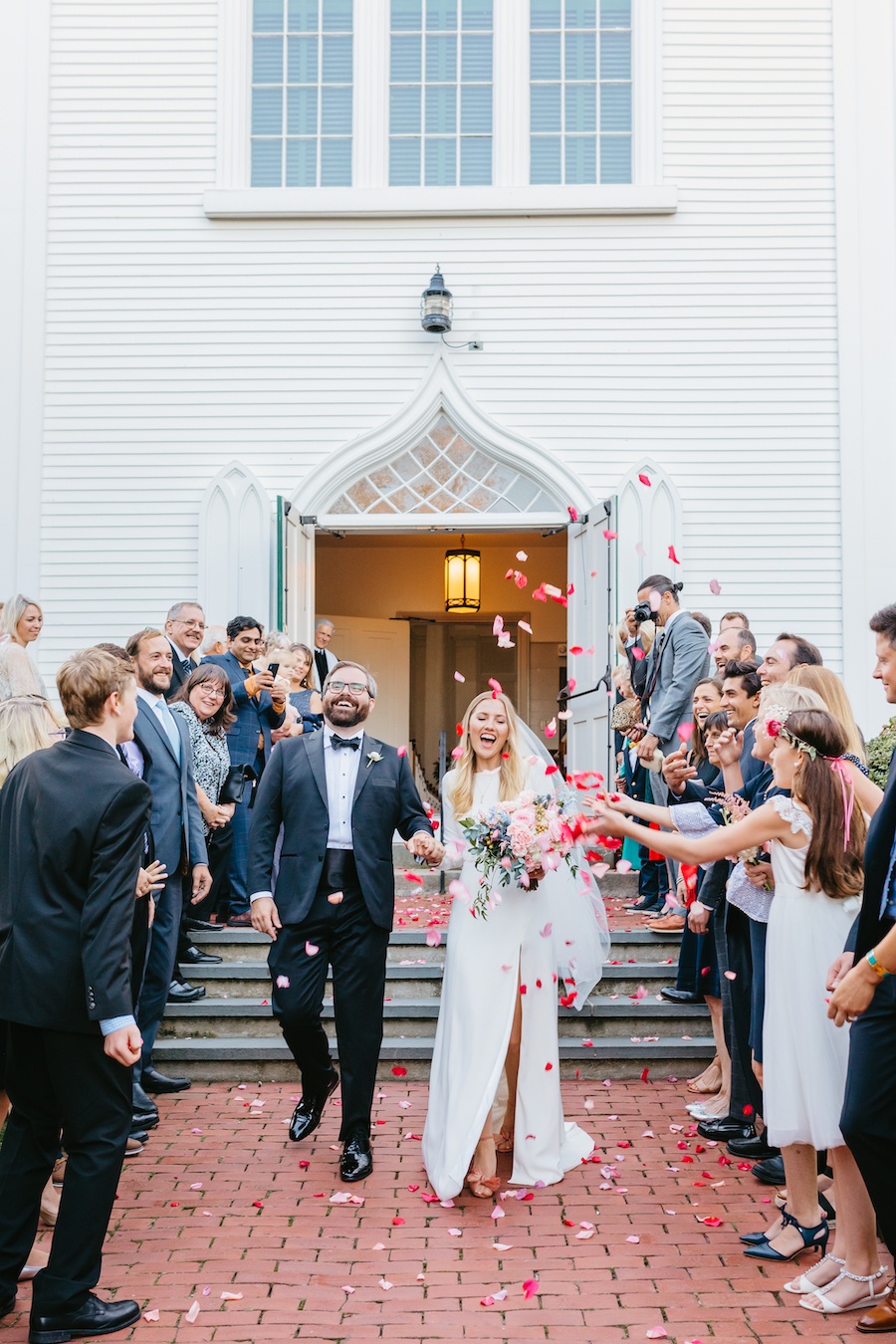 Mary Fossen and Eric Lindsey met on Bumble in December 2017, and the chemistry was instantaneous. When they got together for their first date, grabbing a couple of drinks at a beer garden led to heading to a party at Eric’s friend’s house, which then led to a movie night at Eric’s place. “My sister finally came and picked me up at like two in the morning,” Mary recalls. “It was a really long, really good first date.” Three weeks later, after an evening of drinks out with friends, Mary turned to her cousin Eileen and said “I’m going to marry this guy.” “[Eileen said], ‘Please tell me you haven’t told him this yet.’ And I said, ‘No, no, no, I’m going to keep it casual and cool,'” Mary says. Later that night though, Mary and Eric went back to his home to make dinner and she didn’t exactly stick to the plan. “I was like ‘I love you, and I’m going to marry you,'” she says. Eric’s reaction? “Things escalated quickly, but I was like, ‘Awesome,'” he  says.

About a year later, Eric was waiting for the right moment to pop the question with an engagement ring he’d picked out with help from Mary’s sister and mom. Mary knew a proposal was on the horizon, and the couple had decided that it needed to happen by January 26, when they’d surprise friends with the announcement at their housewarming party. “I had a deadline, so [the week of the party] I thought, ‘Okay I’m going to do it. It’ll be a private, intimate moment. I’m just waiting for when the mood is right,'” Eric says. The tricky part was that Mary, a nurse, was working three night shifts in a row that week. “For days, I was carrying around this ring in my pocket, and she was just not in the right headspace to get engaged,” Eric explains. On the morning of the 26th, the two began to stress about everything they needed to get done before the party, and Eric was doubly panicked because they still weren’t engaged either. “So we were talking about all the things we had to do, and I said, ‘Let’s just get one thing out of the way,'” Eric recalls. “And I got down on knee and proposed right then and there.” In the end, it was “the way it needed to happen,” Mary says. “It was perfect and very natural.”

For the newly engaged couple, the “where” was the most important part of their wedding plans. Mary and multiple generations of her family had all spent time either growing up, living, or summering in Nantucket throughout their lives, so tying the knot on the island seemed meant to be. “It’s a very special place for my family, and now for Eric, too,” Mary says. The day they got engaged, the couple nailed down their reception venue, the Nantucket Hotel, which, (under another name) was also where Mary’s grandfather grew up playing basketball, where her cousin John had once been crowned homecoming king, and where another cousin had also held his wedding reception. The bride and groom made the Nantucket Hotel their own though, with colorful flower arrangements, hanging vines, and tall tapered candles that added a touch of romance. “People always say, ‘[My wedding] was the best day of my life,’ and sure enough it really was [for us] too,'” Eric says. 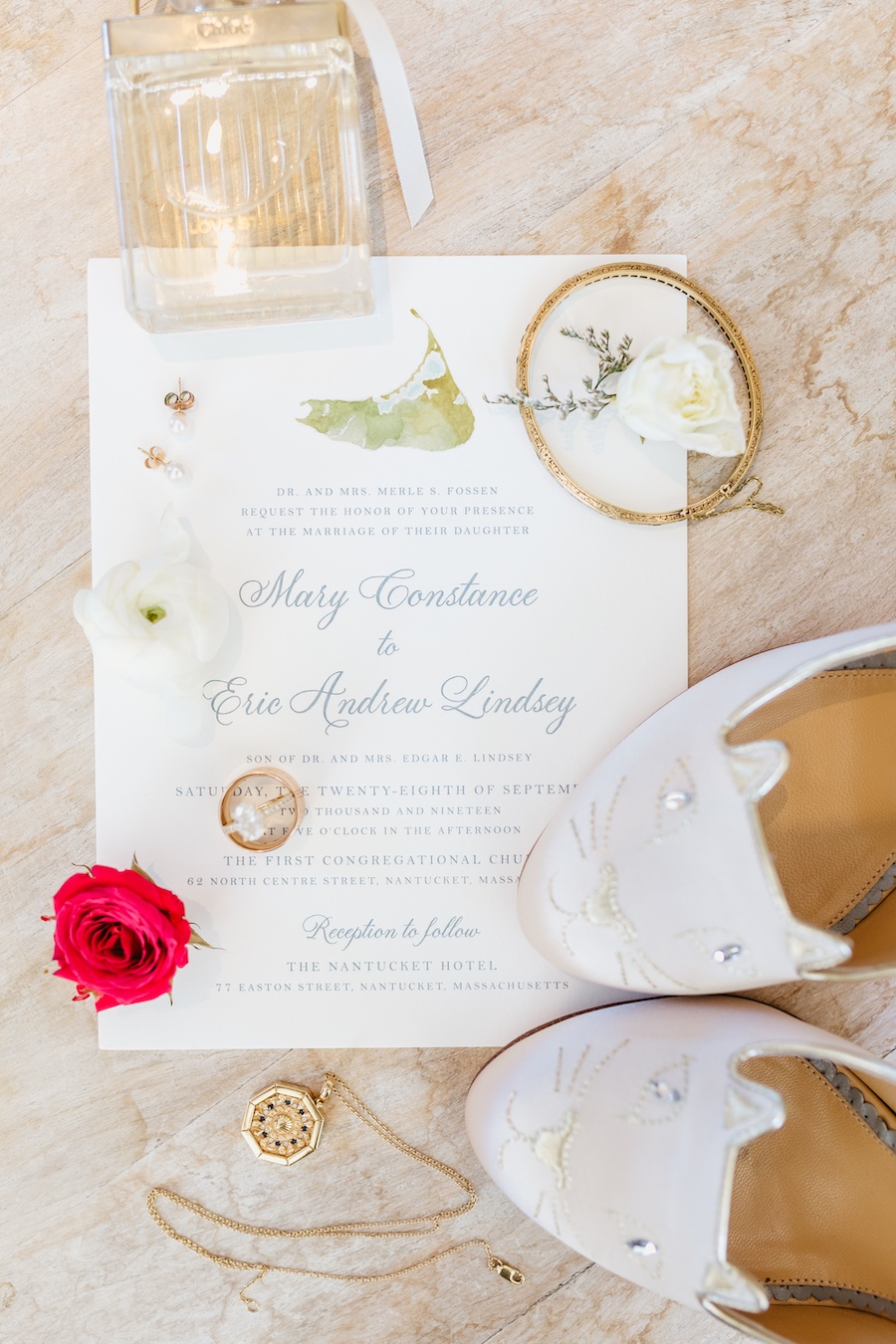 Mary and Eric’s wedding invitations came from Nantucket stationery boutique Parchment, and featured an illustration of the island. “We really wanted to keep everything on theme,” the bride says. 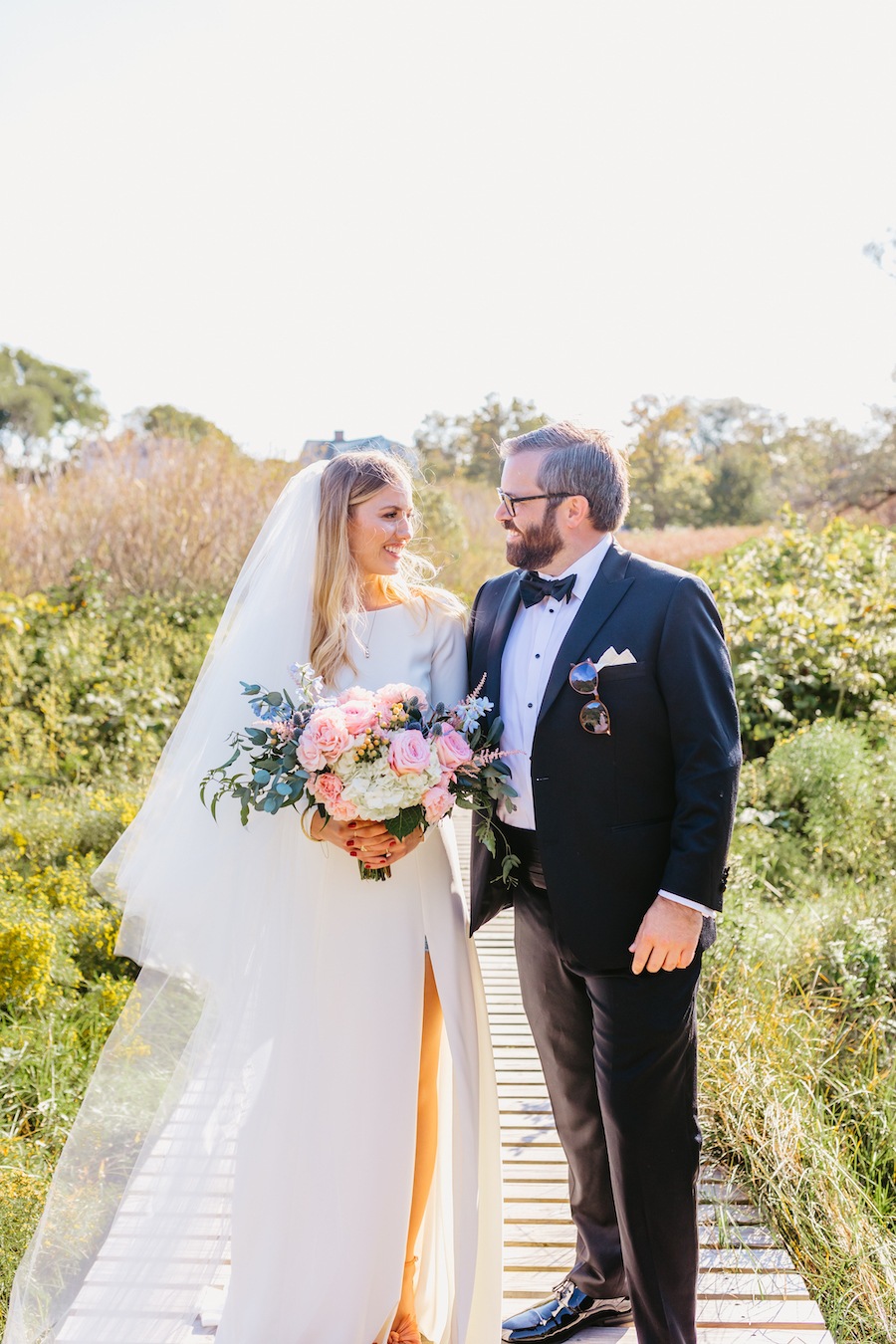 For the first part of the day Mary, who admits she “tried on a lot of dresses,” wore a long-sleeve gown from BHLDN. “I loved that it felt very New England. It was really elegant, but it had a great slit up the side too,” she says. Later, for the reception, she changed into a glitzier sleeveless gown. 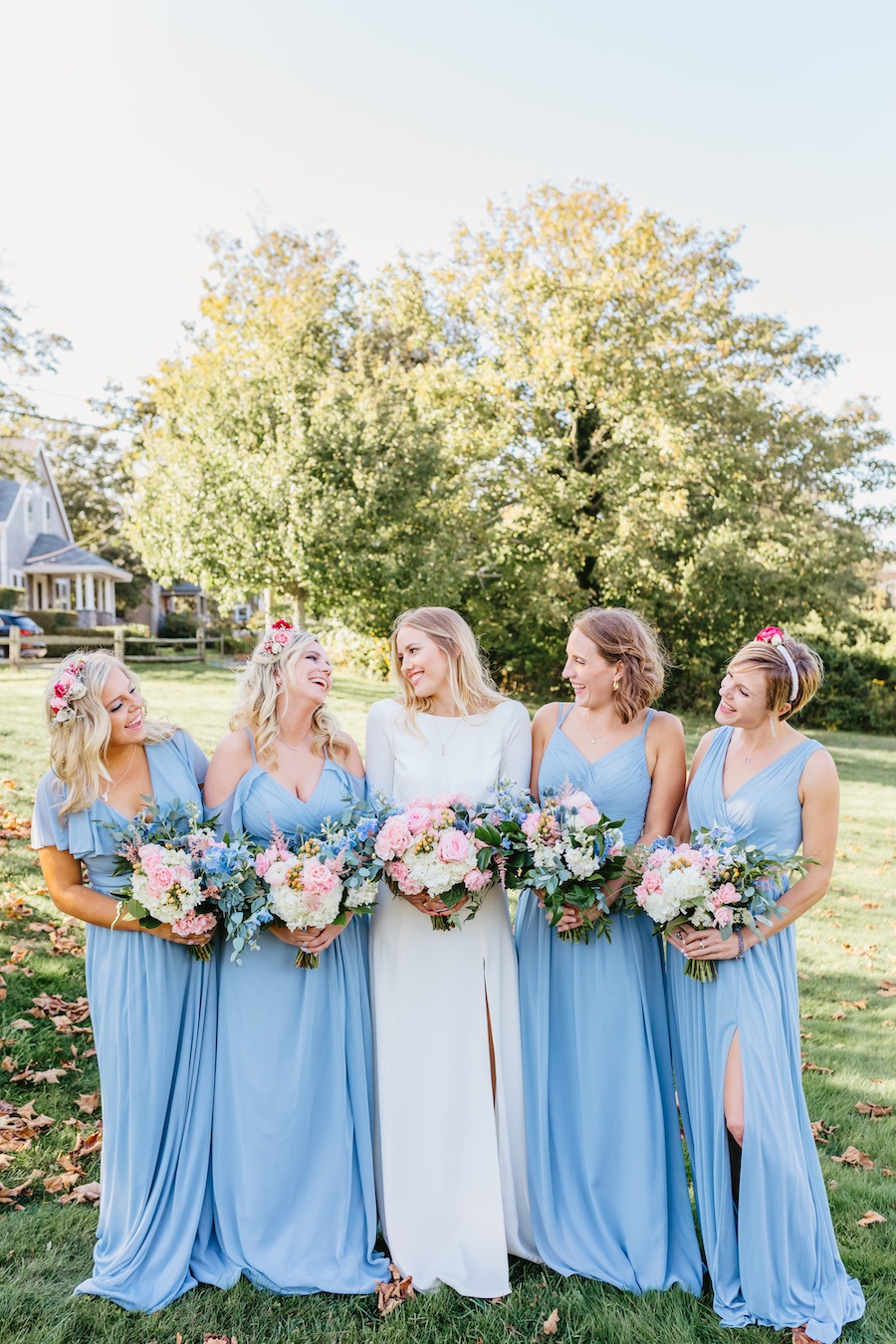 Mary originally told her florist Dawn Kelly that she wanted classic white bouquets with abundant greenery. She changed her mind a few weeks later, opting for colorful arrangements of roses, thistle, hypericum, and eucalyptus instead. “I thought about it and [realized I was] just trying to be easy to please. I really wanted pretty pink flowers, and [Dawn] was like ‘Hell yes,'” Mary recalls. “It was nice to let loose.” 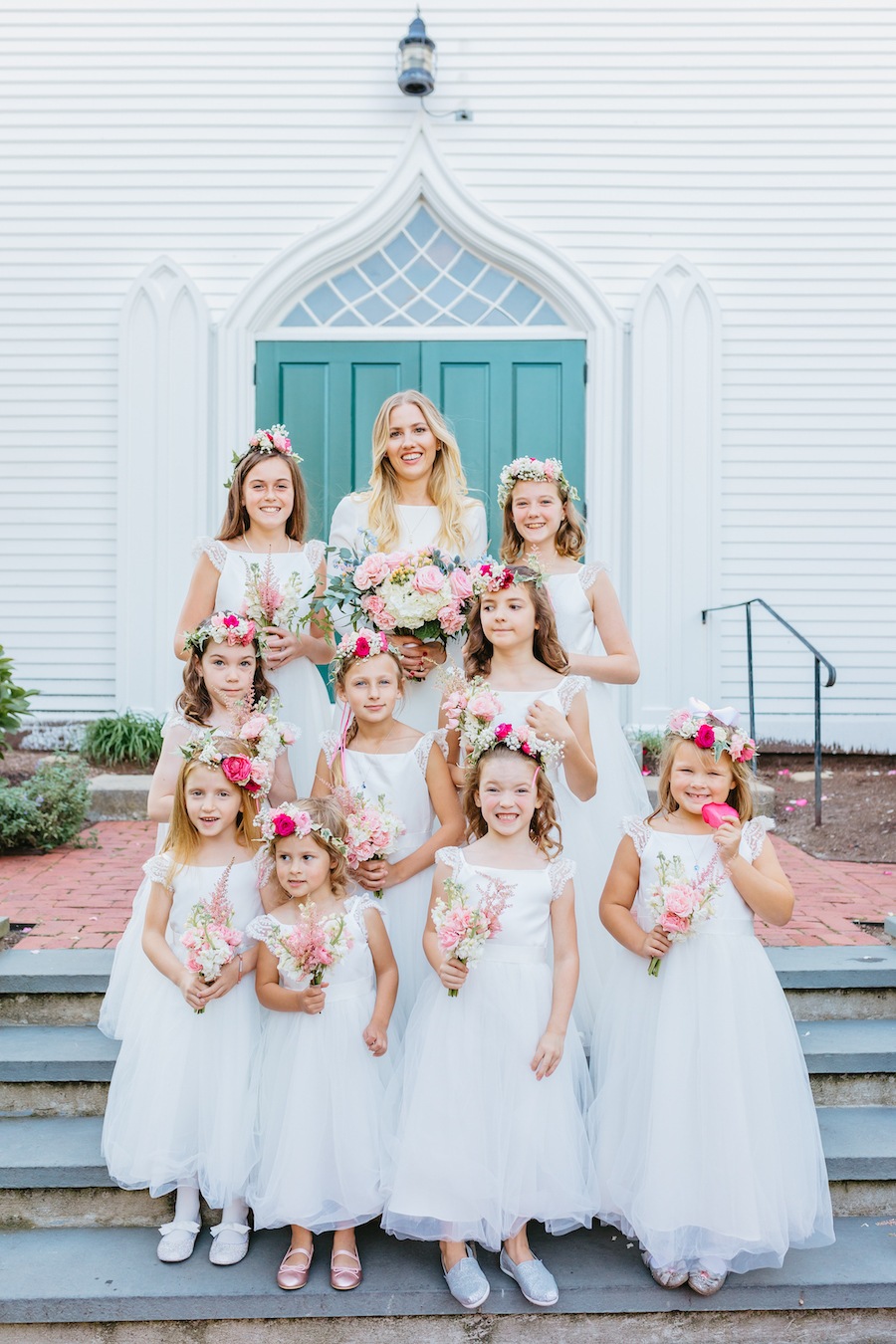 The couple’s wedding featured 10 flower girls (one not pictured) between the ages of two and 12, all of whom are cousins or nieces of the bride. “The flower crowns were adorable,” Mary says. 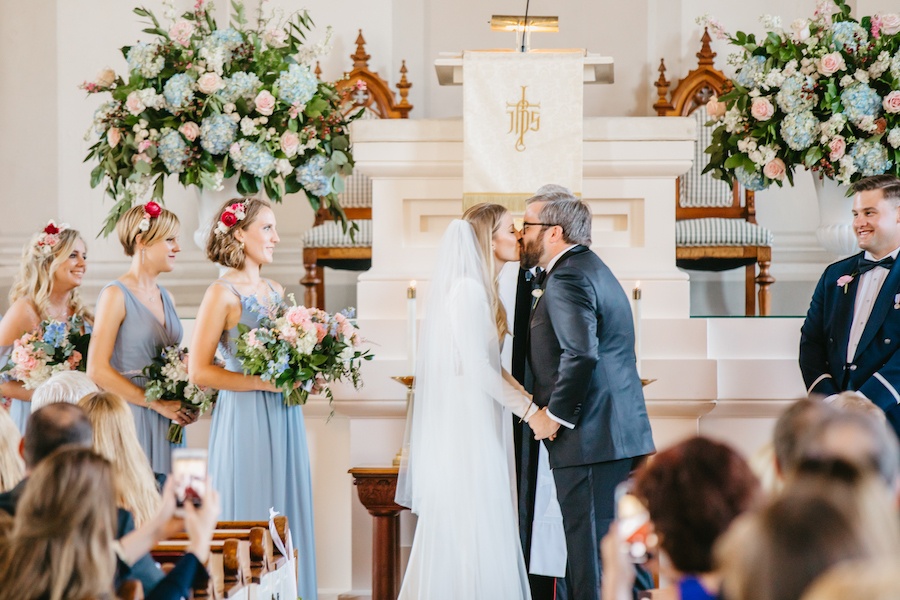 The bride and groom said “I do” at First Congregational Church in Nantucket, where Mary’s 97-year-old grandmother Lorraine is the church’s oldest member, and where four of the bride’s cousins also got married. 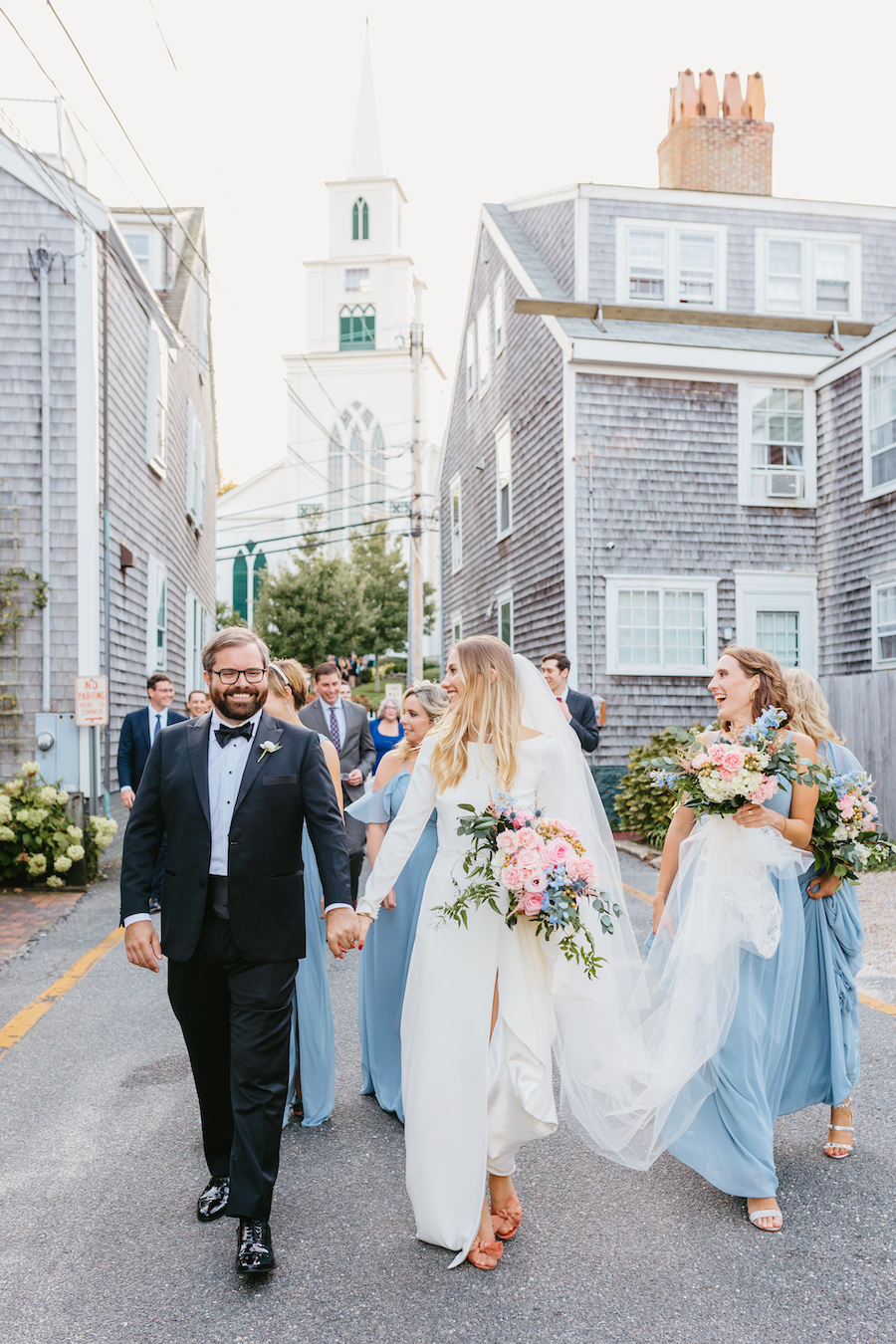 “[Walking to the Nantucket Hotel] was probably the highlight of the day,” Mary says. “We turned around when we got to the bottom of the street, and looked up [as] all of our friends were coming. It was really magical.” 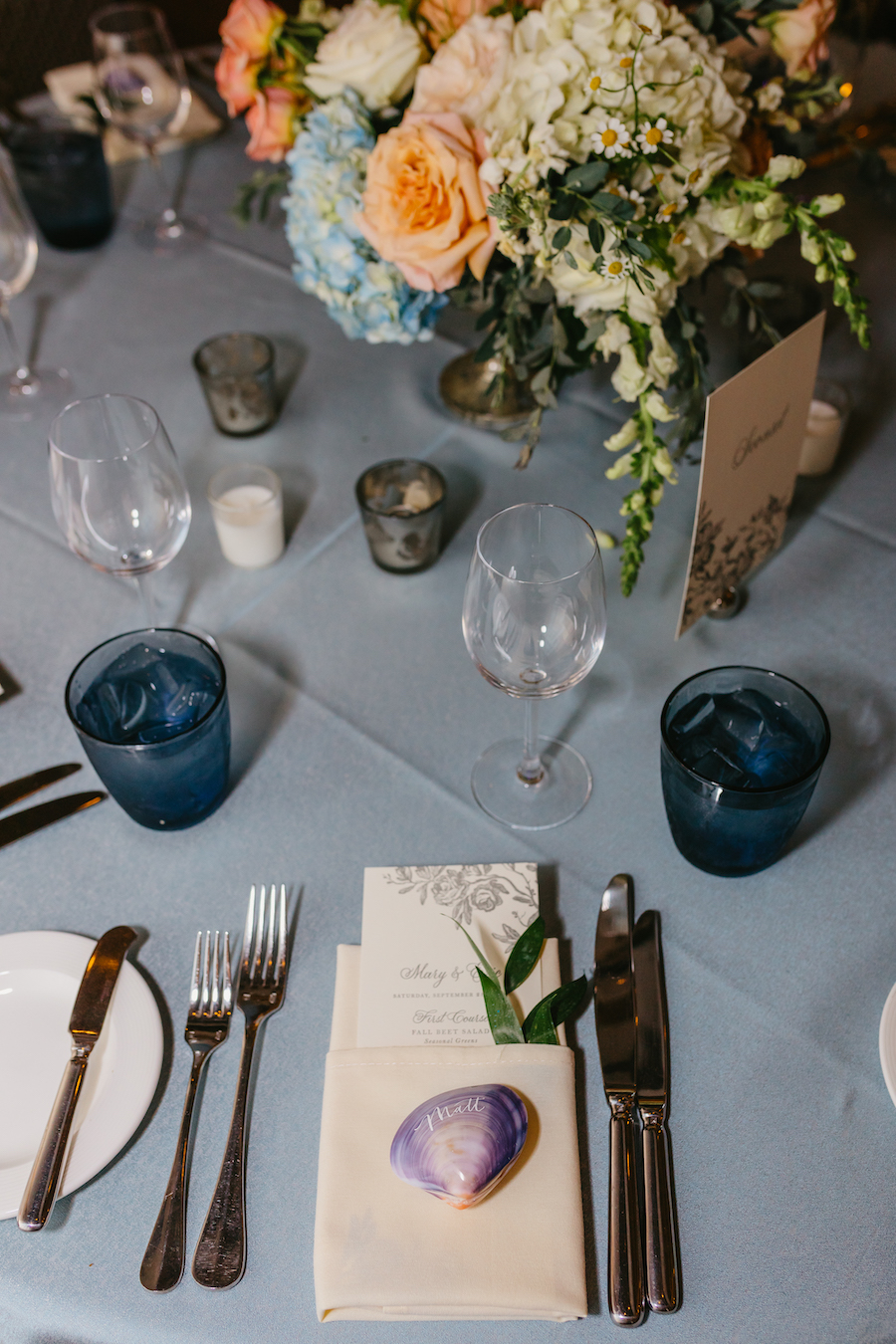 The couple adorned both round and long tables with a mix of blue and cream-colored linens. The clam shell escort cards, calligraphed by Megan Fahy, doubled as favors for their guests. 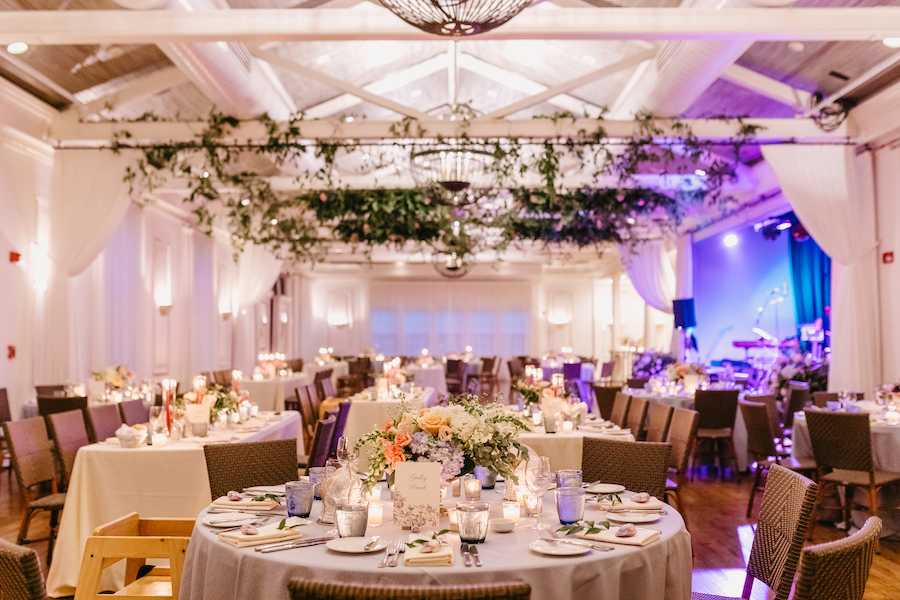 Soirée Floral dressed up the beams above the hotel’s dance floor with lush vines and greenery. “That was on my list of things I wanted from the beginning,” Mary says. 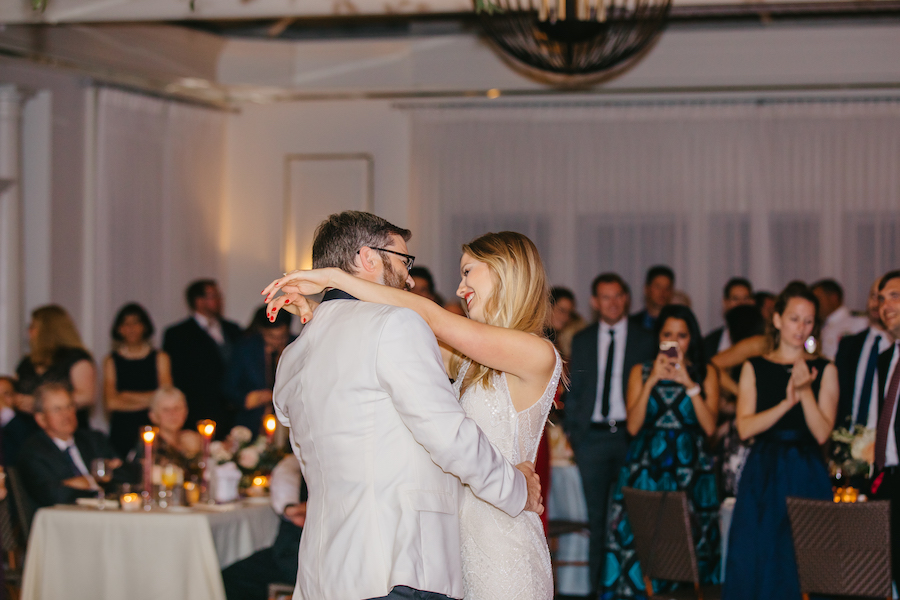 Mary and Eric had their first dance to Elvis Presley’s version of  “The Wonder of You.” “We actually heard it on the show Big Little Lies and I thought ‘This is so moving,'” the bride says. “And who doesn’t love Elvis.”