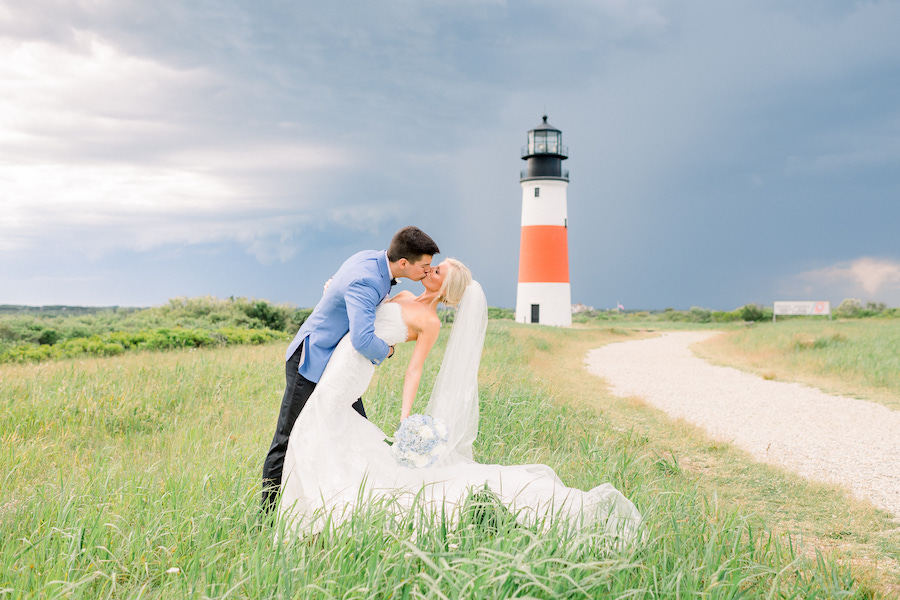 Chapin Duke and Field Yates’s relationship came about as the result of some good old-fashioned matchmaking. The two didn’t know each other, but their moms, who played paddle tennis together and had been friends for decades, urged them to meet up. At first, they were both reluctant.

“Moms do know best, but we both were kind of like, ‘Thanks, but no thanks,'” Chapin says. Eventually, they decided to indulge their mothers, and planned to meet up in February 2016. Before they did so, Chapin suffered a ski injury and was crutch-bound. “I was out of the dating market for a couple months, so once I was able to get off my crutches I said, ‘Mom, what’s that guy’s name again?'” Chapin recalls. So the two got in touch, and soon realized they actually lived on the same street in the Back Bay, so they met at Dillon’s on Boylston Street for dinner and drinks.

The next day, Field went golfing with his mom. “I told her I thought there was some real promise [with Chapin],” he remembers. “But I think I was a little bit measured in my response, so she didn’t retort with something like, ‘You should have listened to me months ago.'” The truth was, both Chapin, a local investment analyst, and Field, an NFL reporter for ESPN, knew there was chemistry between them, and they couldn’t have been more grateful to their mothers for setting them up. “We give them full credit for initiating this relationship,” Field says.

In 2018, on a crisp, sunny day at Vail Mountain in Colorado, Chapin and Field hit the slopes along with Field’s mom and Chapin’s family, who spend a great deal of time at the mountain. Field was carrying an engagement ring. “It’s one thing to carry around your cell phone and maybe a snack, or perhaps a hand warmer. It’s another thing to have a diamond ring in your pocket,” Field says with a laugh. After lunch, the couple split off from the group and headed for the Midturn Mile, a nearly three-mile backcountry trail, where, per local tradition, skiers stop partway down at a creek to share a drink with a friend, Field says. “It was a special place Chapin and I always liked to go, and it had some privacy to it, too,” he adds. They skied just past the creek, stopped there, and popped off their skis. After a few moments, Field began to speak about how perfect their trip had been and how much Chapin meant to him. Then he got down on one knee. “I said ‘Yes’ and kind of blacked out and cried,” Chapin recalls. After, Field pulled out two of their favorite Tree House Brewing Co. beers, one of which was printed with “Chapin, will you marry me?” on the bottom, while the other was personalized with “Chapin said ‘Yes!'”

The bride and groom knew from the beginning that they wanted to tie the knot at Sankaty Head Golf Club on Nantucket. “Sankaty is a place we’ve cultivated a ton of memories,” Field says. “And [the golf club] has so much natural beauty.” On the day of their celebration, they awoke to beautiful sunny skies. As the two headed to the Sankaty Head Light for their first look, though, a few droplets began to fall. “We were able to get through the first look photos with some really interesting clouds in the background,” Field recalls. But then, as the two headed to the beach club for their ceremony, the weather shifted dramatically. “The skies opened and there was golf ball-sized hail on the golf course. It looked like someone was out practicing their putts on every green we drove by,” the groom says. As thunder cracked, they decided to move their ceremony from the lawn to a covered dining area at the beach club. “It caused me tons of angst, but once the ceremony got started it was like, ‘Let’s just let this ride and we’ll make an adventure out of it,'” Field says. “Now looking back, it was incredibly memorable and it brought the entire party together.” Plus, after the hail and thunder ceased and the skies cleared, out came a rainbow. 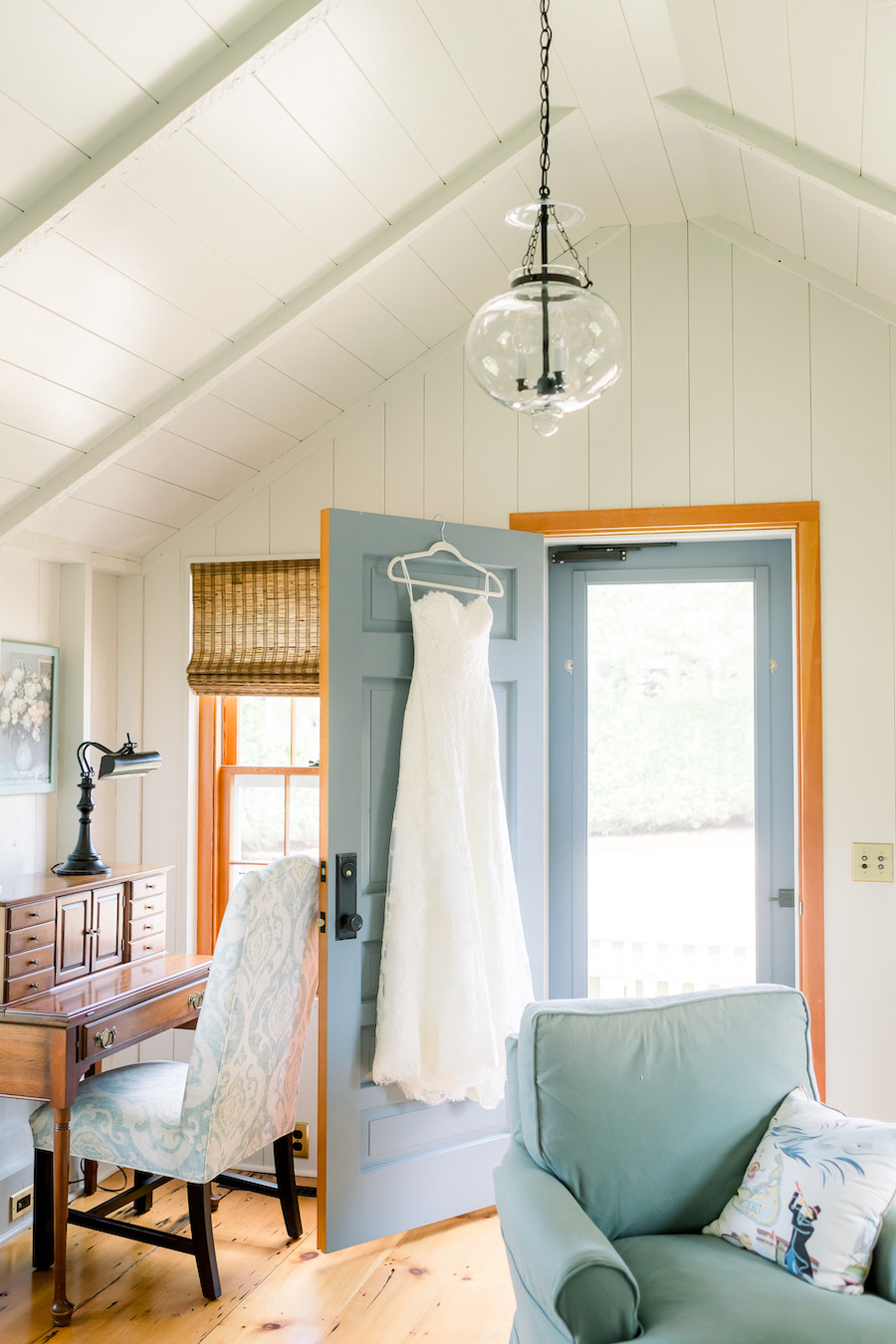 Chapin found her Pronovias gown at Flair Boston, the second bridal salon she visited. “I went from wanting to have a big flowy dress to a [more form-fitting] lace dress,” she says. 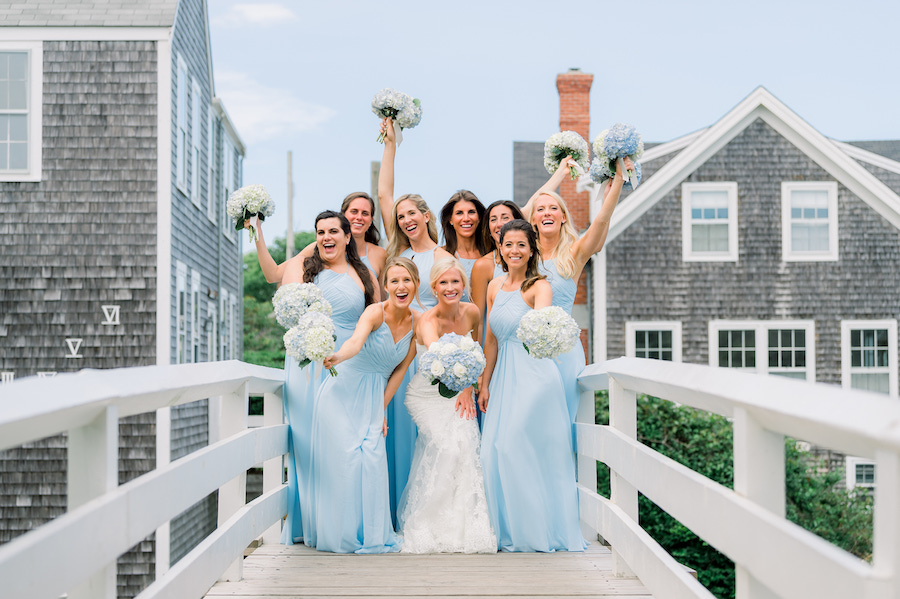 For her and her bridesmaids’ bouquets, Chapin opted for arrangements of hydrangeas, a flower that is abundant on the island, in shades of white and blue to match her bridesmaids’ gowns. The bride’s bouquet also included white roses. 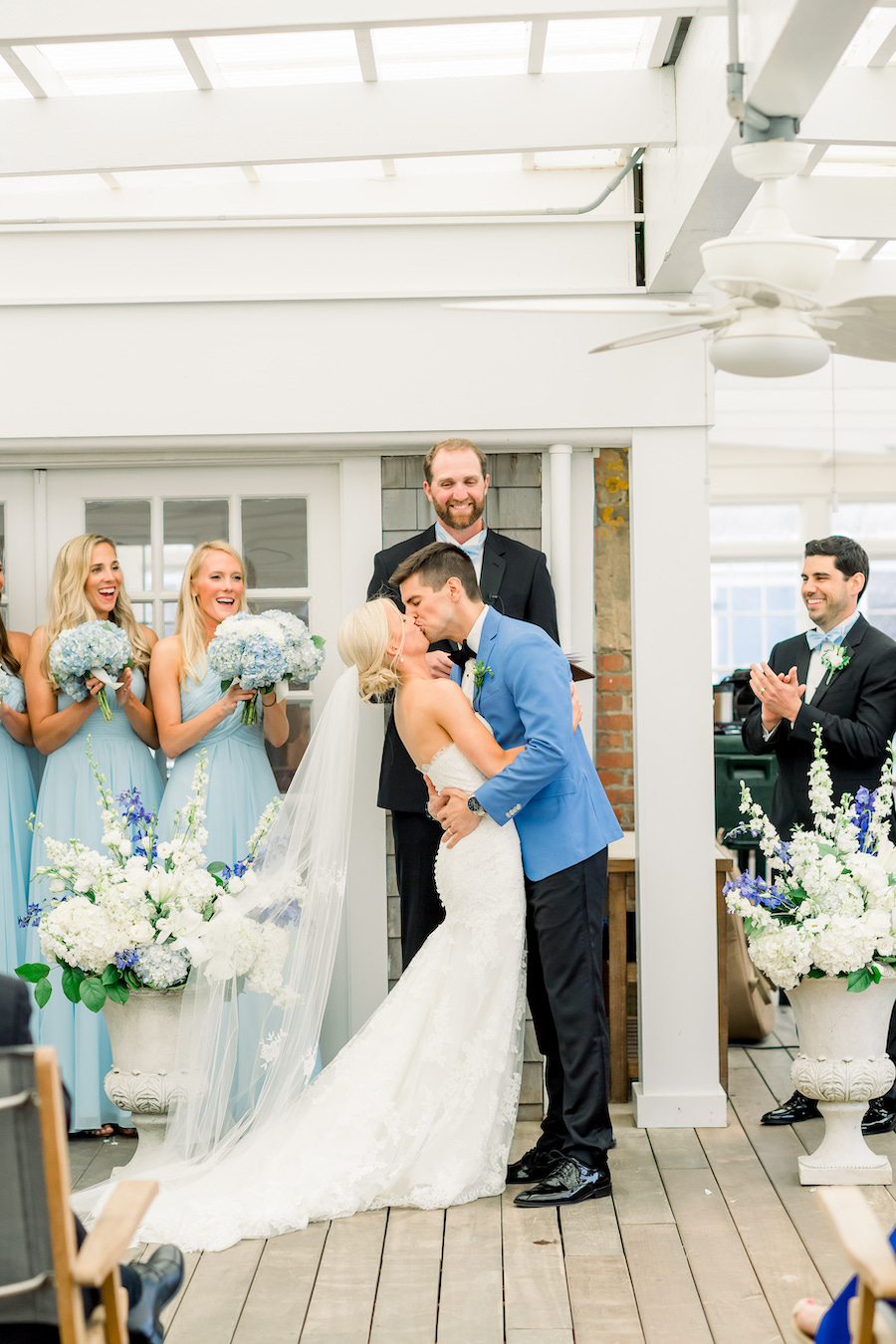 Friend of the couple and prominent Nantucket native Sam Herrick officiated the couple’s ceremony. “It was heartfelt and hilarious, and struck all the right notes,” Field says. “We feel eternally grateful for the job Sam did.” 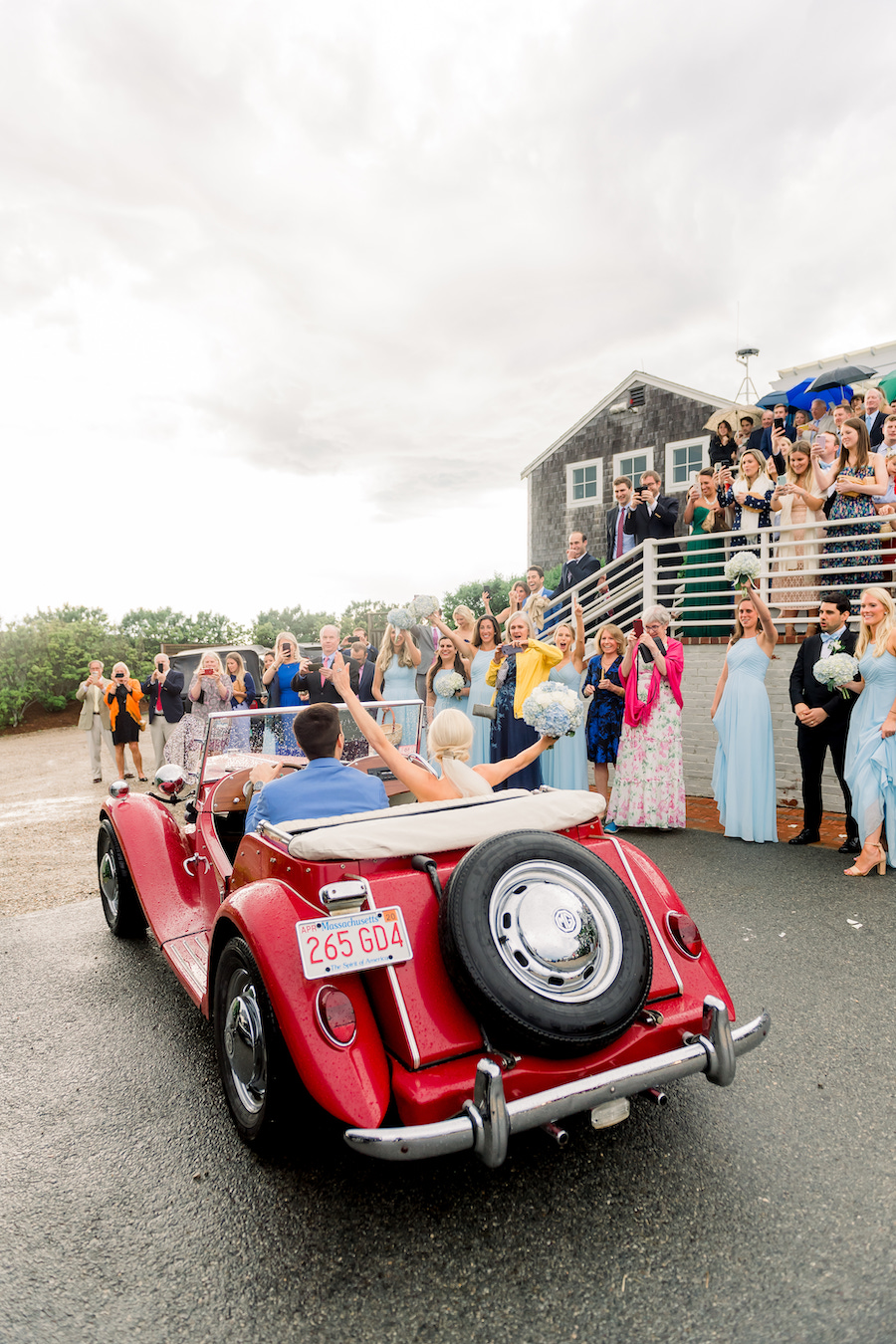 After swapping vows, the pair headed to their reception in Field’s dad’s antique MG. To prepare for their getaway, the groom learned to drive a stick shift in the months leading up to the big day. “It was a little bit unnerving,” he says. “There are lot of thoughts that cross through your mind prior to the wedding, but you don’t necessarily think of learning how to drive a car as being one of them.” 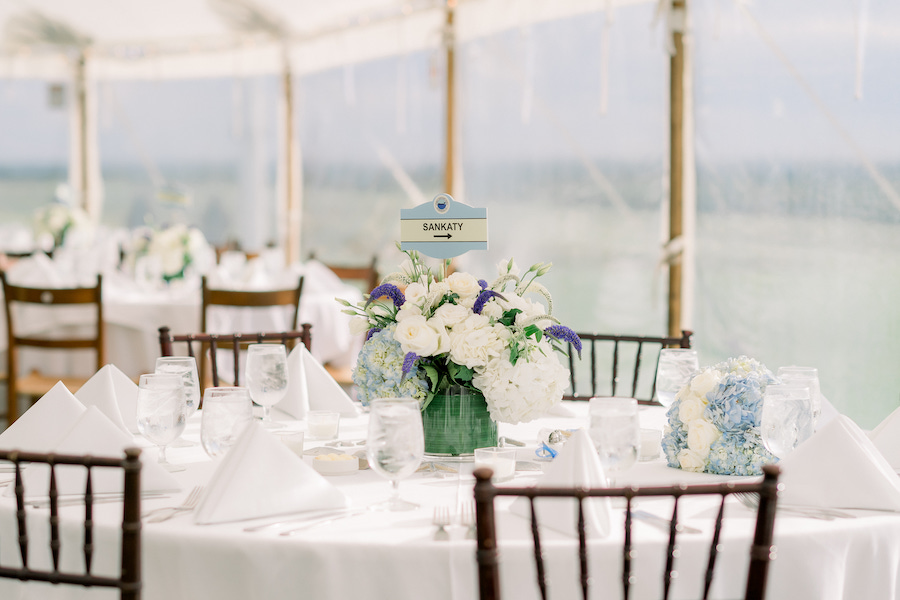 For their centerpieces, the couple opted for arrangements of blue and white hydrangeas, lisianthus, white roses surrounded by votives, sand dollars, and starfish. Rather than numbering their tables, they named each one after Nantucket villages. 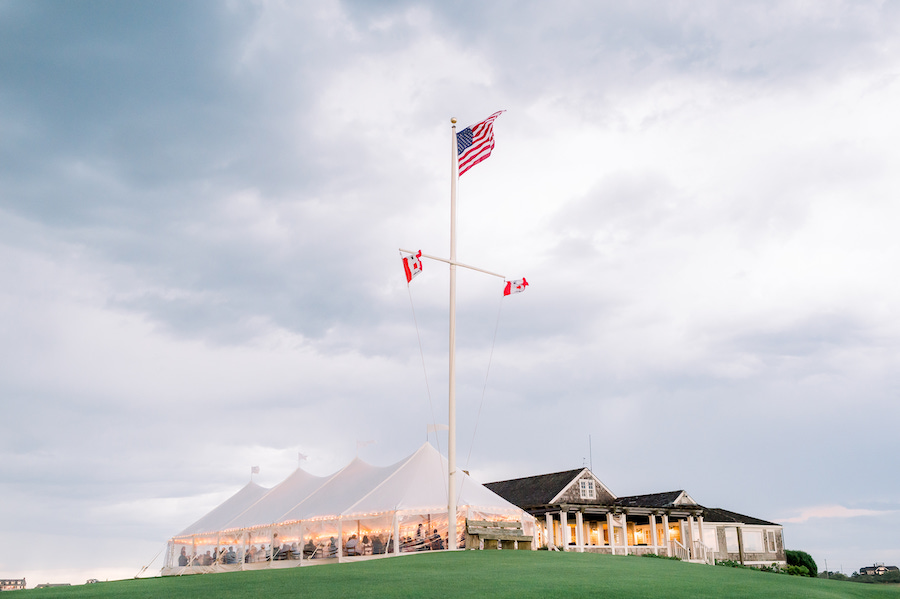 “The reception tent was beautiful, especially if you were to go stand outside and look at it from the golf course,” Chapin says. “And of course everyone went to pose in front of the lighthouse, too.” 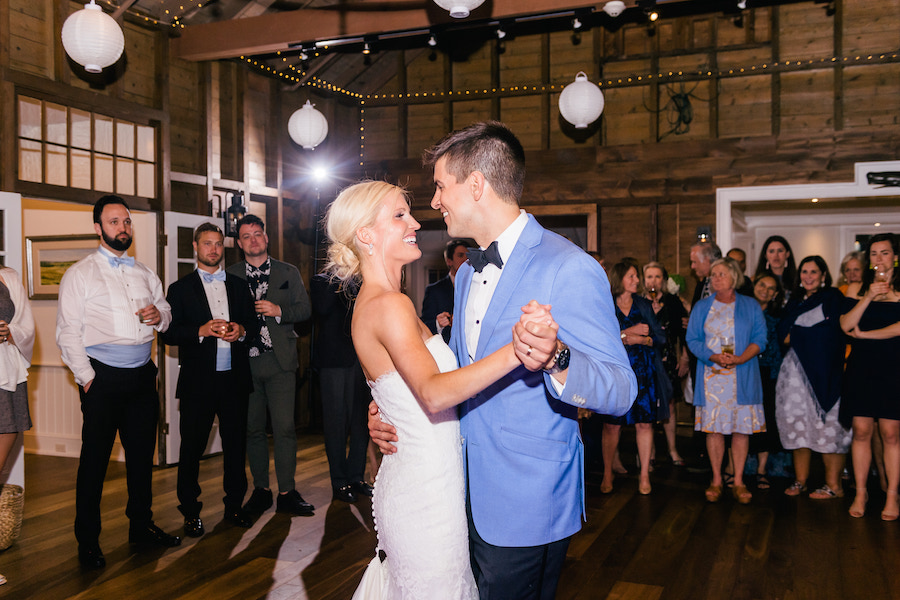 On a wooden dance floor inside the golf club, the couple had their first dance to “Beyond” by Leon Bridges. “We’d heard the song not long after it came out and we both had taken to it, and then we saw Leon Bridges at a concert in Boston almost a year before we got married, and it cemented it as our favorite choice,” Field says. “It has a lot of good meaning, and we hadn’t heard it at someone else’s wedding either.”