When Shenlu Xu and Alex He spotted each other on Coffee Meets Bagel in February 2016, it was their photos that initially attracted one another. When the pair started chatting though, they realized they had something major in common: They were both from Shenzhen, a city in southeastern China. “It’s a pretty rare connection,” Shenlu says. “We’re really grateful for the app, otherwise our [paths] wouldn’t have crossed at all.” Not long later, they arranged to meet for their first date at Alden & Harlow in Harvard Square. “I was 10 minutes late and he was waiting for me at the [entrance] to the restaurant” Shenlu recalls. “I forgot my ID, too, so I wasn’t able to drink at all.” Despite some minor initial setbacks, the rest of the date went smoothly. “I felt like I’d known him all my life even though we’d just met,” she adds. Their meal went so well, in fact, that they then went out three more times that week. After that, both knew something serious was brewing.

About two years later, while Shenlu was visiting China for a month, Alex started plotting something big. In February, after Shenlu had returned, the couple jetted off for a weekend trip to Austin, Texas. Alex had arranged for them to go kayaking after they arrived, and he planned to pop the question while they were out on the lake. “That day didn’t go very smoothly” though, as Alex puts it. While leaving the airport in their rental car, they suddenly felt all four tires pop at once. They’d driven over traffic spikes and all of the tires were flat. “So we spent most of the day fixing that,” he says. When they finally arrived at the lake around 4 p.m., it was windy and rainy. Although they continued on with their plans, the water was rough as they paddled, and Alex realized proposing on the water probably wasn’t the safest move. Luckily, they eventually came upon a dock and decided to stop there. “Once we were on the dock, he unzipped his jacket and I saw he was wearing a t-shirt that said ‘101,’” Shenlu recalls. It was the 101st week since they’d began dating. Then Alex kneeled down and asked Shenlu to marry him. “I was really surprised,” she says. “When you’re living together, you usually get the sense of a proposal coming, but I had no idea because I was in China for a month.”

Since the bride and groom are both only children and most of their relatives live outside the U.S., the two opted for a small celebration with only their parents and closest friends. As they brainstormed where to host their nuptials, an idea dawned on them: “We thought, ‘Why not go back to where we met for the first time?'” As it turns out, Alden & Harlow was the perfect place for their wedding reception, both for its cozy, intimate feel and all of the memories it held for them. After a ceremony at the MIT Chapel, the couple and their guests gathered at the restaurant for tasty American fare, speeches, games, and plenty of dancing. “It was a dream come true, and I’m kind of proud we pulled everything off,” Shenlu says of the wedding day. “Most of our guests don’t live in Boston and flew in from all over the world, so we were really grateful they came to celebrate,” Alex adds. 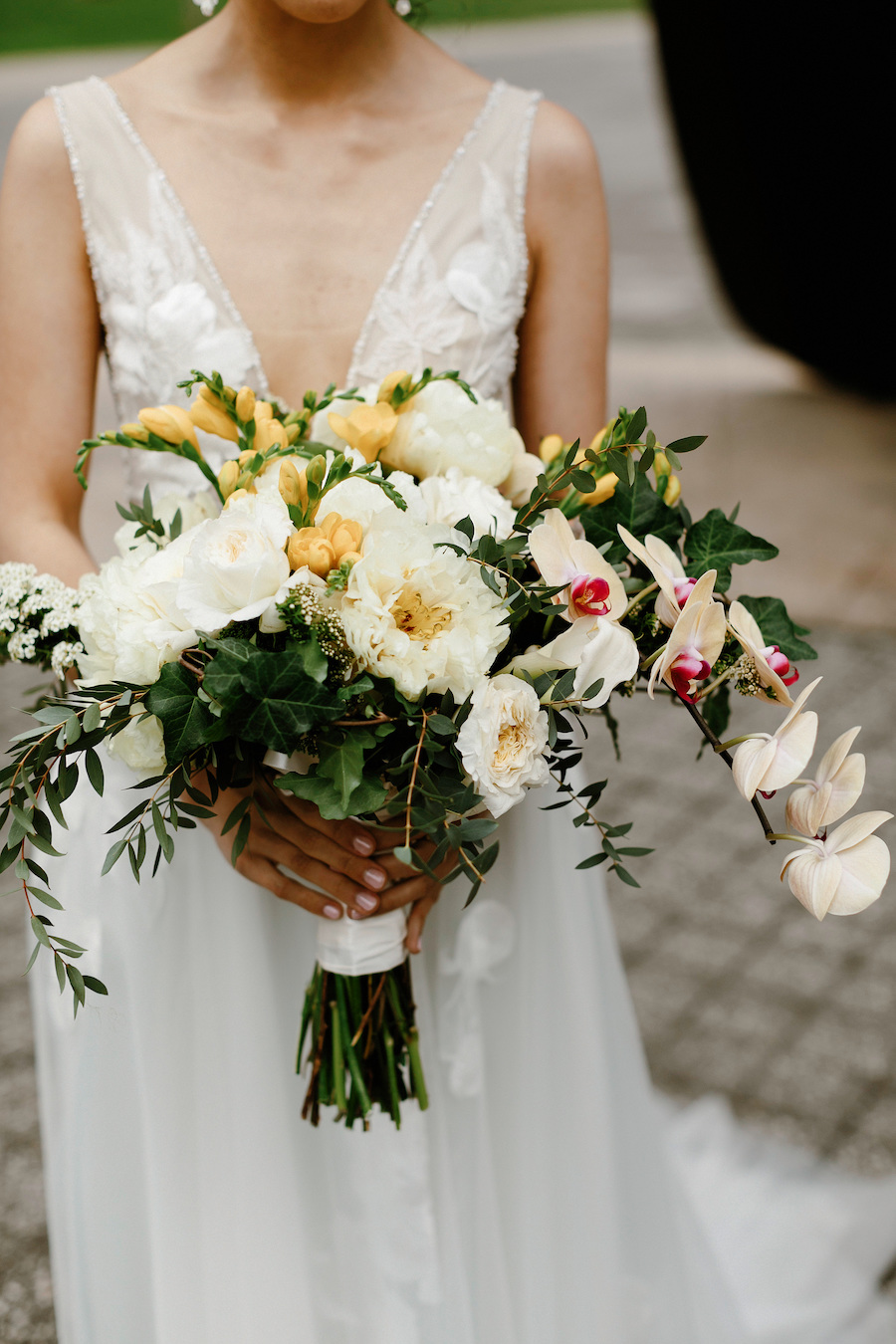 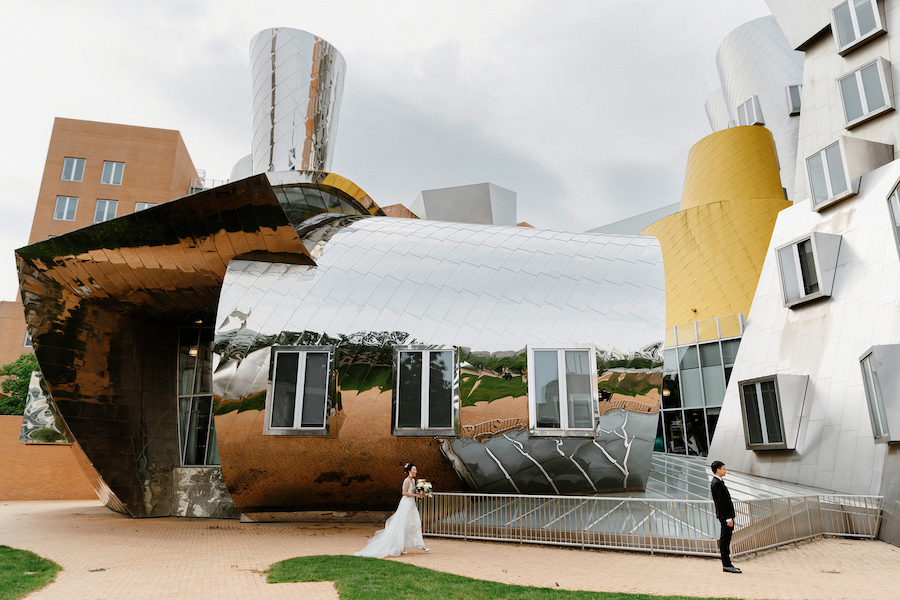 Shenlu and Alex had their first look outside of MIT’s Ray and Maria Stata Center. “The first look kind of felt like the first date and the first time I met him, where he was standing far away and I was walking towards him,” Shenlu says. “It was really exciting.” 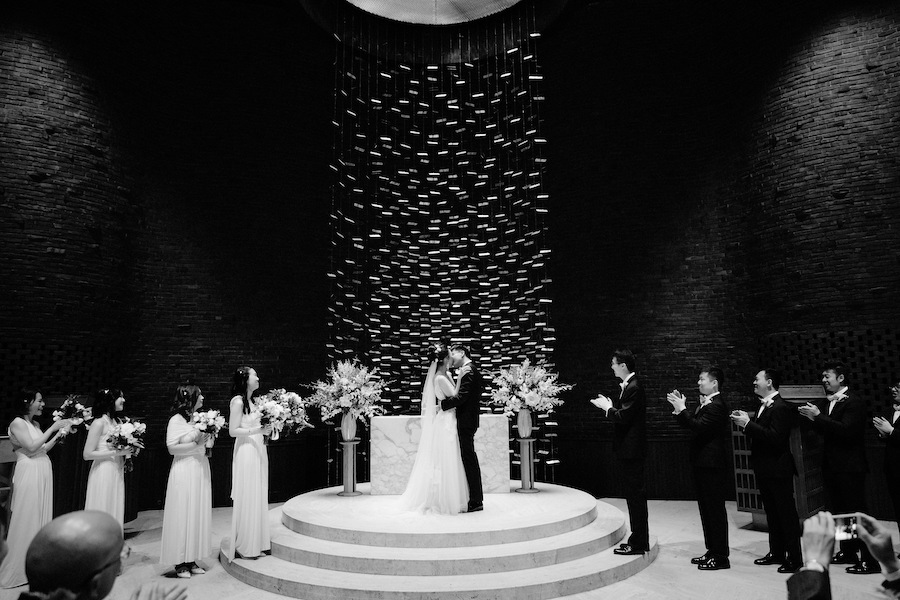 The couple exchanged vows inside the MIT Chapel, where Shenlu’s friend Ningzhou officiated the ceremony.”We chose [the MIT Chapel] because Alex spent six years at MIT and we used to just walk around the chapel a lot, and it’s also just a beautiful location,” the bride says. “The light inside is fantastic.” 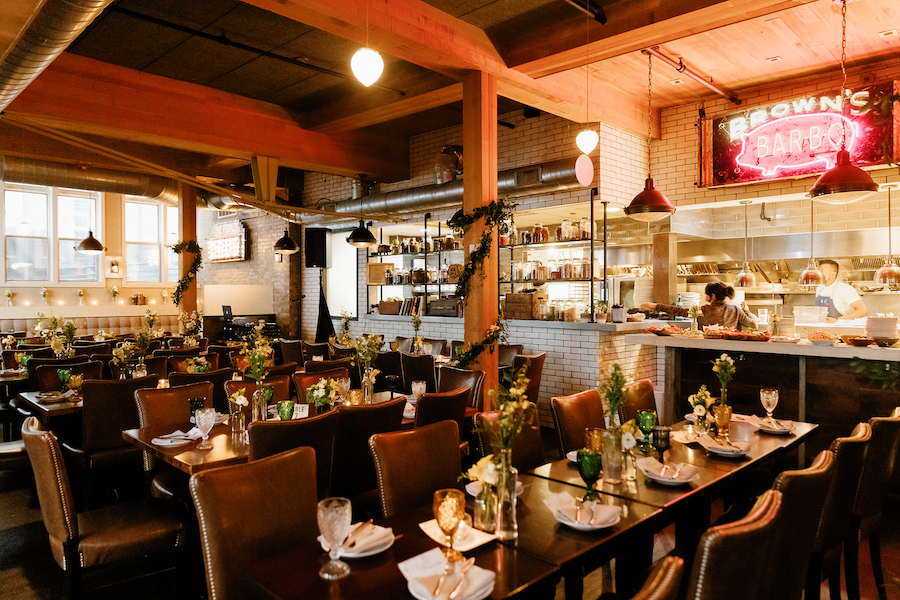 To create the relaxed, cozy vibe they envisioned, the bride and groom decorated their tablescapes with candles and clear bud vases holding small floral arrangements. “We didn’t want huge arrangements that would impede conversation,” Shenlu says. “We wanted this to be a wedding focused on our friends, and hoped [friends who didn’t know each other] would become friends,” the bride adds. To facilitate this, the couple grouped their guests at tables based on personality and shared interests. 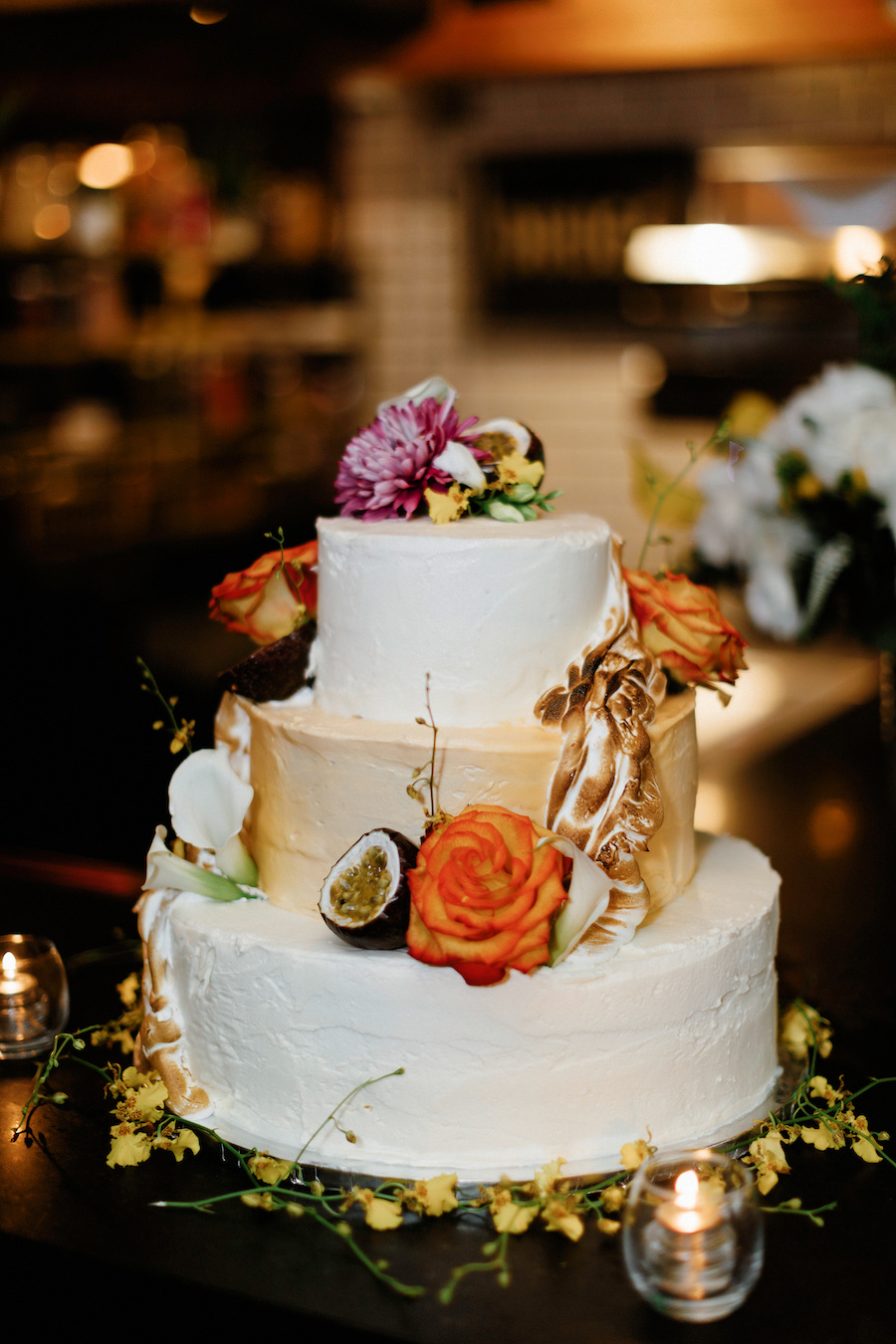 Shenlu’s wedding dress inspired the look of the three-tier passionfruit cake the Alden & Harlow catering team whipped up for the occasion. 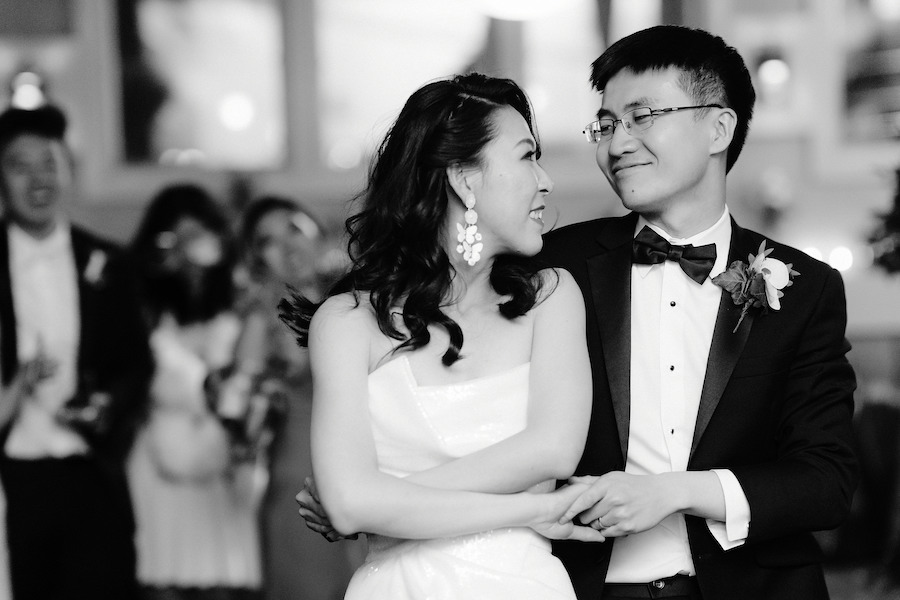 Shenlu and Alex had their first dance to “The Moon Represents My Heart” by  Teresa Teng. “It’s sung by a very famous Taiwanese singer, and growing up we both listened to the song,” the bride says. Ahead of their wedding day, the couple took dance lessons to prepare. “We were still practicing the day before the wedding, so we were kind of nervous,” Shenlu says. “But it was really amazing to have all of our friends and parents watching.”